Easter Sunday in the Republic of Ireland

Last Easter we were in South America.  Wow, we have come a long way on this world journey.

But no matter which country we are in, and what the celebration, a child needs to feel special and delighted.

So it was a bit of a challenge for this single Mum to make sure “Easter Bunny” turned up.

There were farm animals like the cat, dog, hens, rooster, and ducks to all factor in.

Being a large yard, it seemed best they were on dry ground.
Where possible up high and away from where animals might devour them.

And near the house.

So the egg basket came in handy for collecting them.

And smaller unwrapped eggs were housed in an egg carton.

The hunt then continued in the yard.  A few eggs were in trees.

Today was a load of fun watching him race around.  It didn’t matter which country we were in. Easter Sunday morning was always going to start for this boy with an Easter Egg Hunt.

He was pretty pleased with his collection.  Some local new friends here had also delivered him some nice treats, and of course, there was a nice package from me.  And they were all in before they were devoured by the ducks or chickens.

It surprised me then, that after breakfast Explorason decided we should go to the local church.

So we quickly dressed and headed down the lane past the cows.

You can just make the 2 village churches out in the background.

We arrived and the service had already started, but we were pleased there was one person walking up behind us. There were not many there.  An old couple on the front, 2 families, and the American cycling tourist that had wandered in behind us. Oh and a man who turned on the stereo when it was time to sing hymns as they had no organist.  This did make the church sound like it had a lot more people in it than there were, and I also notice that only myself and a couple of others were attempting to belt out the hymns in somewhat of a melody.  In under an hour, it was all over. 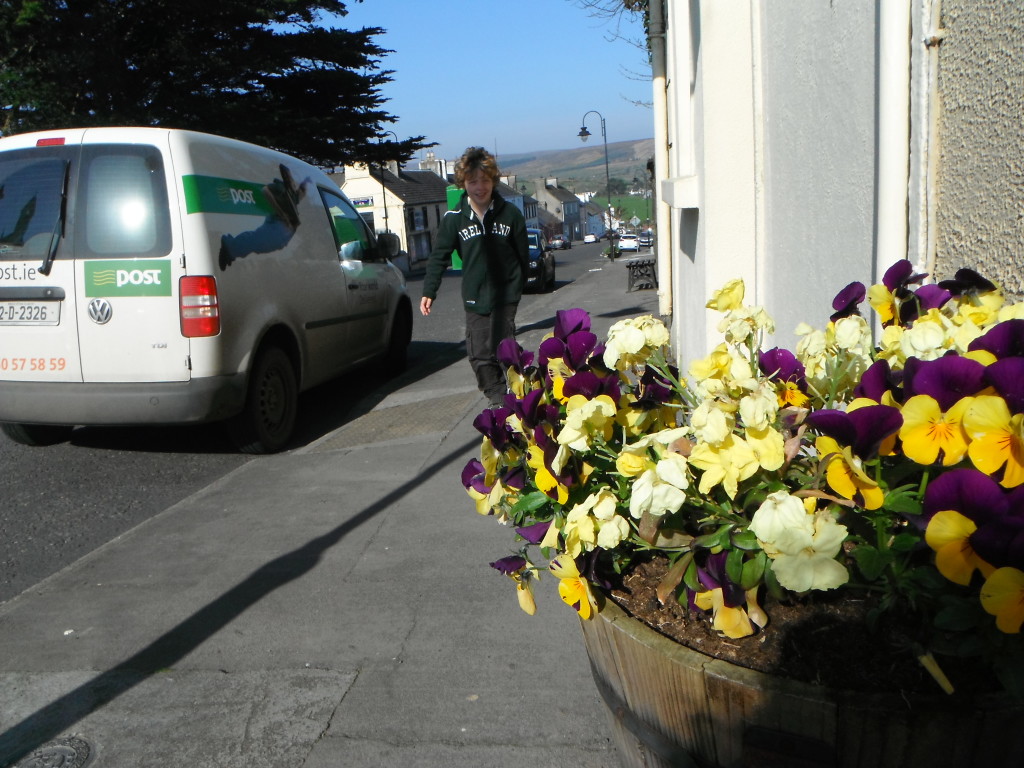 A little run down the empty main street

We had shared communion on this resurrection remembrance day.  The minister was off to two more parishes, and we were off down the deserted main street once more.

I then noticed the spring flowers were starting to appear.  Pretty pots were just beginning to bloom. 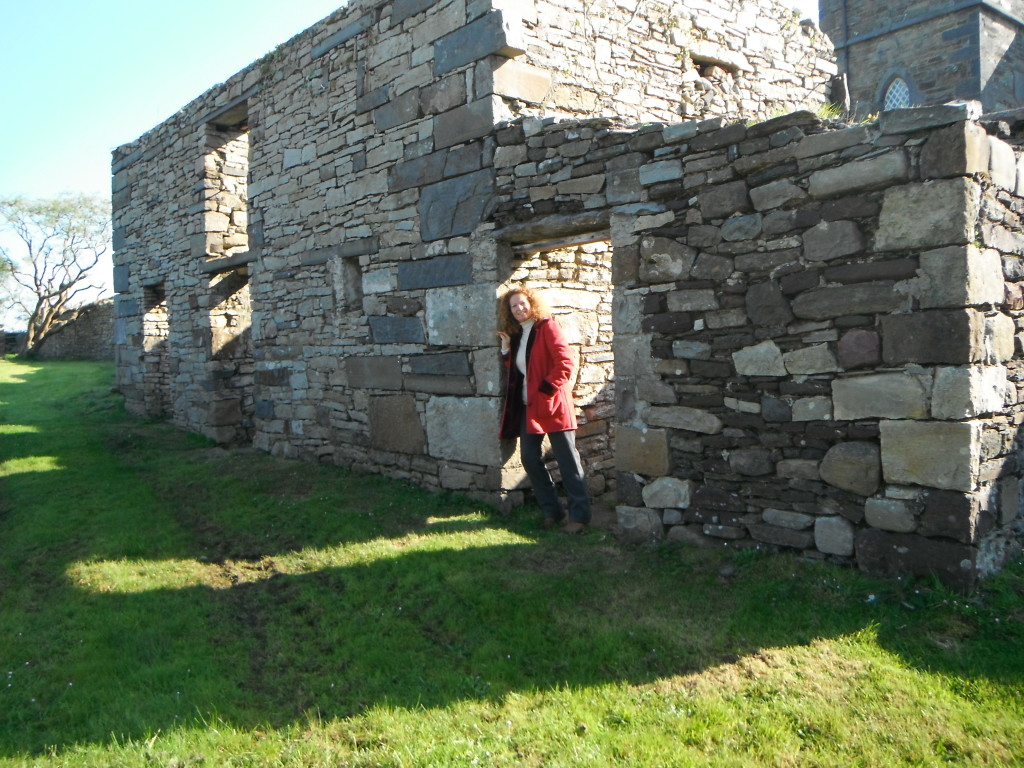 We then decided to explore a couple of the historical remains of some buildings.

It was only 10:00 a.m. and a beautiful day.  One drawback we didn’t realize when we took on this house-sit was that there was no Sunday public transport, so we were stuck with walking where we wanted to go for the day.  But we were determined to go out and make a day of this Easter Sunday. 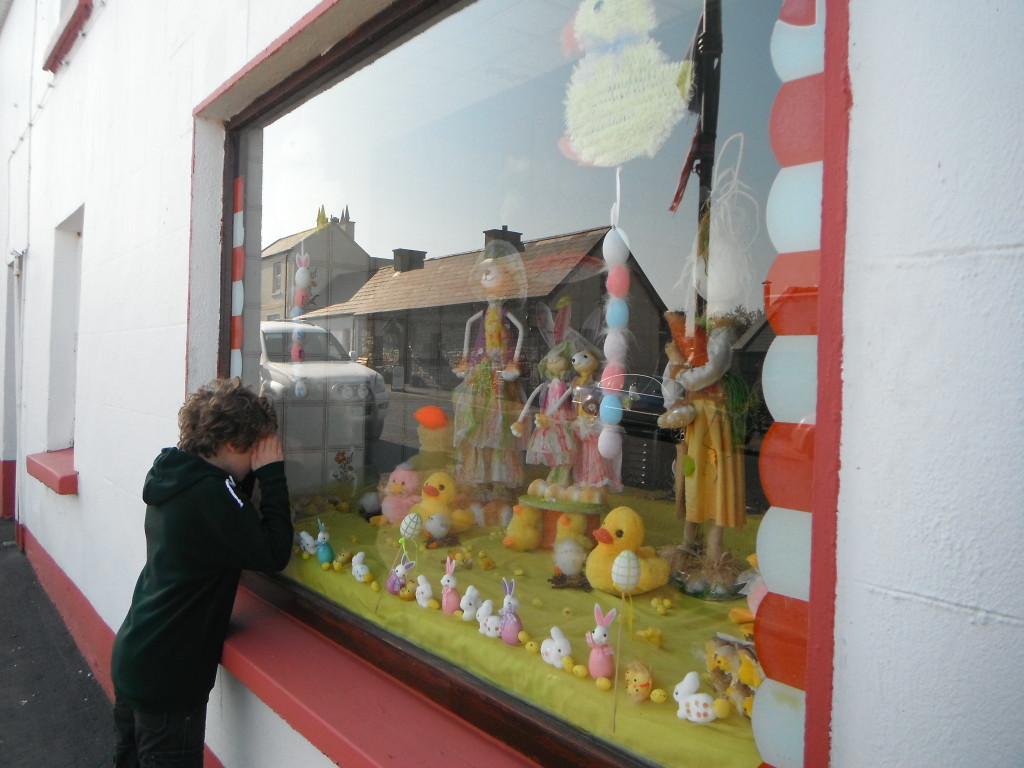 Easter display in the butcher’s window

So down the main street, we continued.  The little butcher had made a great job of decorating his window.

Someone had planted tulip bulbs in the boat near the old millstone.  It felt like the spring was here.

We continued down the village main street and past the old stone wall. Here double bloom daffodils were being munched on by insects enjoying this sunny day.

It was as though life continued in the stillness of this morning. 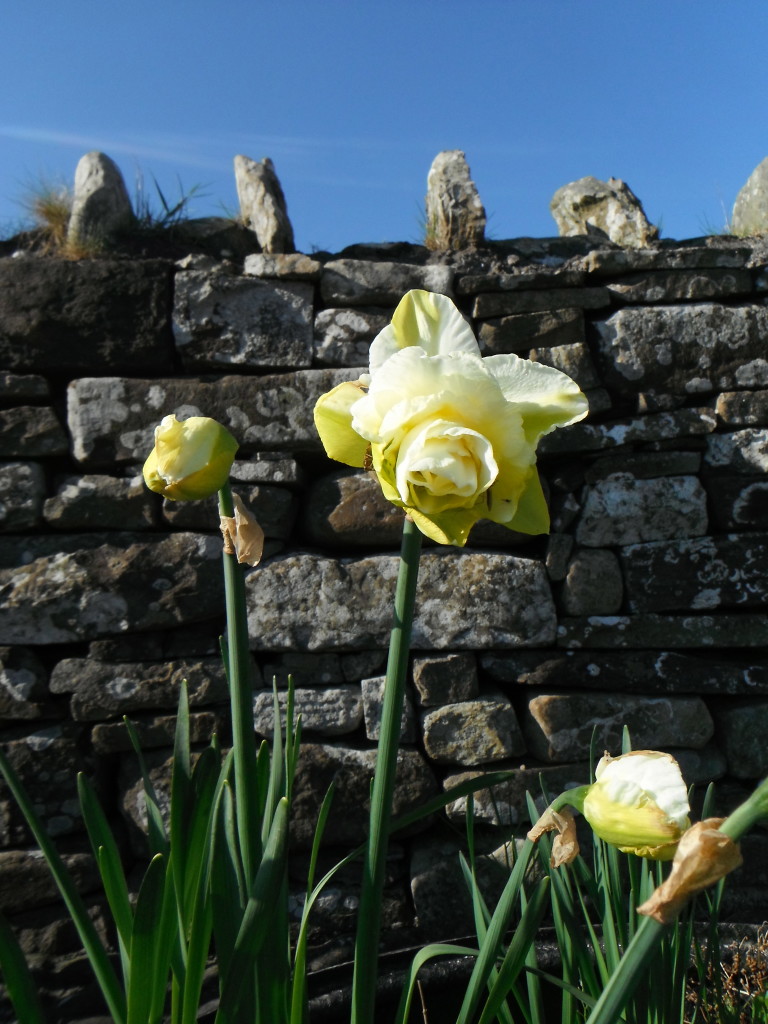 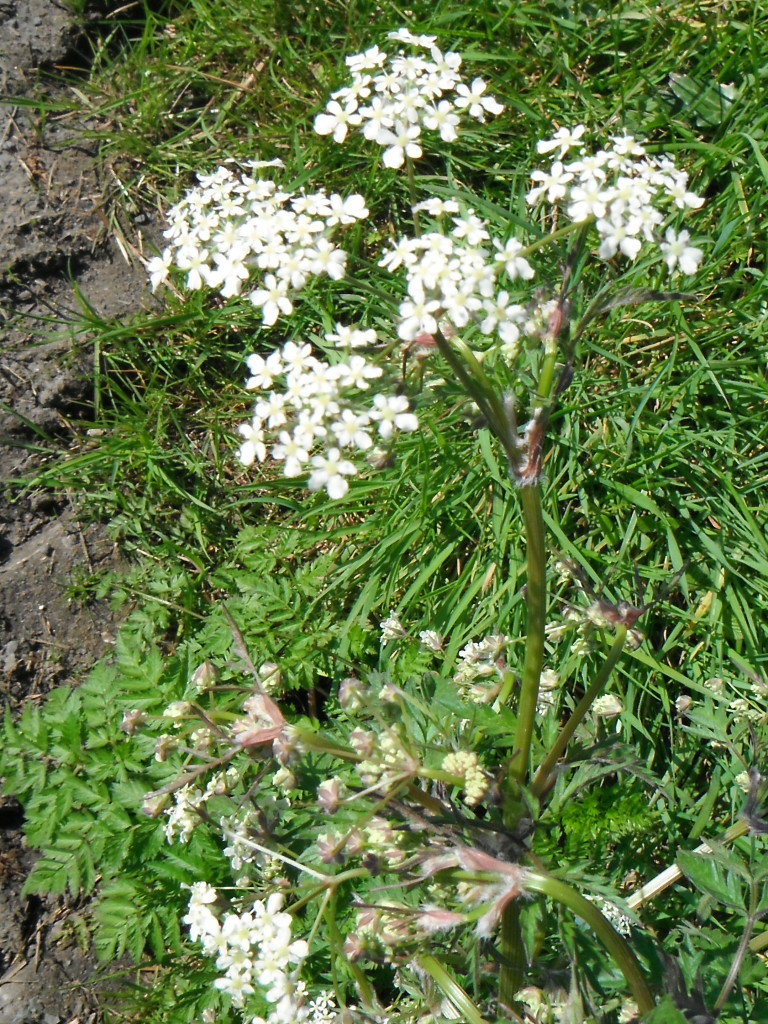 As we meandered back down our lane I noticed the Queen Anne’s lace was just blooming.  It reminded me of my childhood.  My Mum used to grow it in my childhood home.  I can picture the spot in my mind so vividly.

We stopped and had a conversation with the cows.  We invented a great story and the more we talked to them, the closer they came.  It was quite funny.

Back at the house, we collected the eggs and made French Toast for lunch.  Then we decided we should take the dog for a walk down the beach.  I sat on the rocks and watched Explorason play with James. Next thing I knew, they had completely crossed the river.  The nearby field had several caravans that had moved in, and a group was cleaning up after the storm damage.  They had fixed the fence, which meant Explorason could no longer shortcut at the hilltop, much to his disappointment. 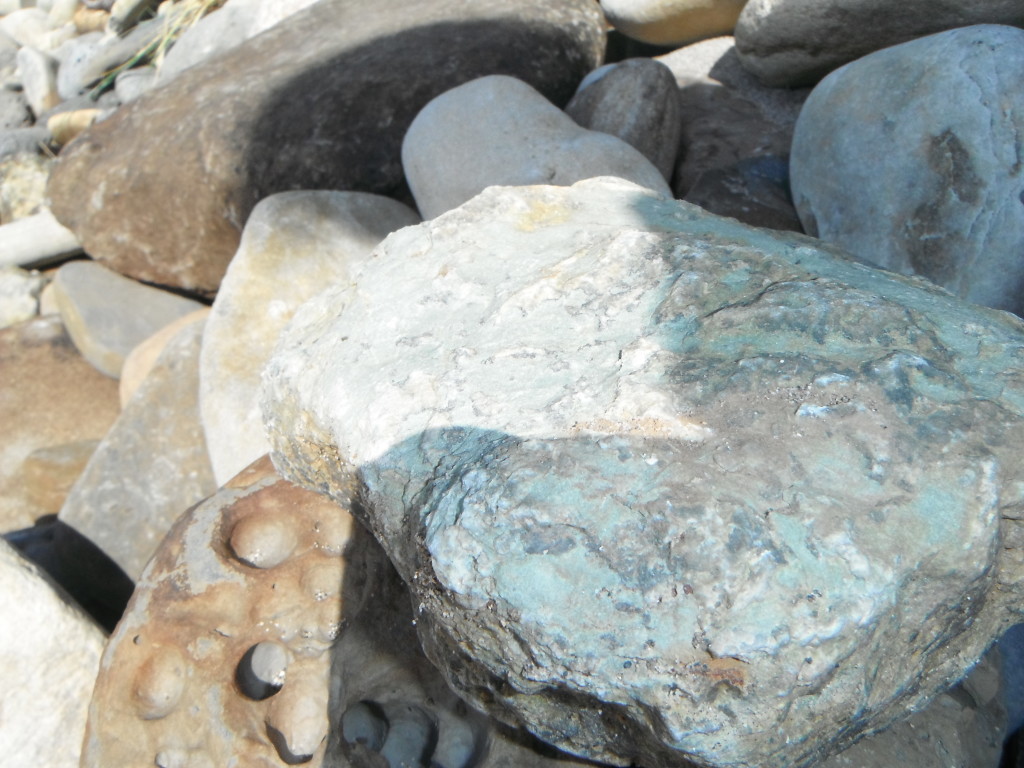 Rocks at the beach

So he then decided he would start to collect some more rocks for his collection.  We often spend a good hour in the rocks, looking at fossils, rock colors, formations, and climbing.

We have also collected some small smooth pieces of buoys that he wants to make something with this week.  It will be interesting to see what is made.  I’ll let you know on that one.

Along with the other collecting, my bags were soon full with driftwood pieces.  Sometimes we use these to start the fire, but this week we are also going to make some things with them too.  What?  No idea!  Wait and see.  Right now we also have a huge collection of cartons that came with all the food, and he has been busy making robot parts. All part of embracing his creativity.  And to be honest, I really enjoy it too!

By the time we had walked home, it was 5:00 pm, and he was hot. He stripped off and next thing I knew the house was silent. Both boy and dog were asleep – and I it was the first time I had enjoyed peace and quiet during the day.  He slept for a good 2 hours, and in fact, had we not agreed to meet some locals for a charity event in the village, I am sure he would have slept through.  So I think it was about 7:45 p.m. when I quickly woke and dressed him to walk back down to the village. Gee, we were getting fit today!  Just as we arrived at the corner, along came one of our friends, so we completed the journey together.

When we arrived at the Irish Pub, I was shocked at the people there, but we managed to get a seat.  In no time the charity event for Leukemia began.  The place was packed.  In fact had we not bought tickets to try to win some prizes, we would probably have left. It was too busy!

By 11:30 p.m. we decided to call it a night.  Home to our housesit just before mid-night we really had made the most of every waking hour we had on this Easter Sunday in Ireland.  How did you spend your Easter Sunday?  I’d love to know!

If you would like to house-sit, please join Housesitmatch.com by clicking here.

Fantastic news – use this special in the “Redeem Coupon” section.  Then enter EXPLORAMUM-10 and get 10% off too!

You’ll also be helping us with our travels.

11 thoughts on “Easter Sunday in Republic of Ireland”