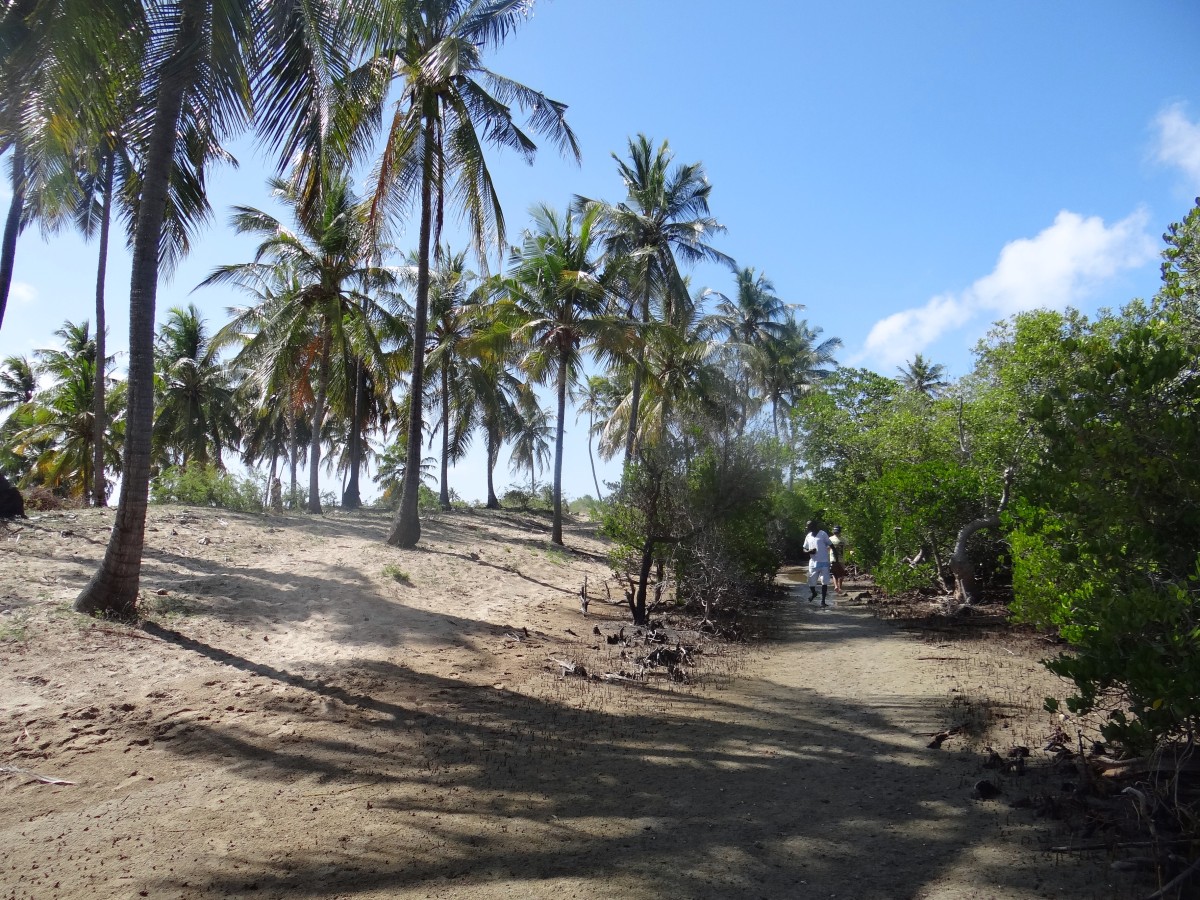 Hidden away off the north coast of Africa on the tiny island of Lamu is the small village of Kipungani.

This sleepy completely Muslim settlement was once the thriving capital of Lamu Island – back when the Arabs used to trade from the north, and the Indians came from the east. In fact, it is Kenya’s oldest inhabited town (well the debate reigns if it is here or Lamu town actually).

We are keen to visit Kipungani.  We ask Daniel from Kusini House if he would take us there.  Kizingoni Beach offered the speedboat, but we decided if we started out straight after breakfast, it might be nice to walk.

We set off on foot, and it is getting warm around 9:30 a.m. as we stroll along the beach front, but as the tide is coming in, Daniel heads inland via the mangroves.

Soon we are slushing in the mud, keeping a sharp eye for the crabs that might like to nip at our toes.

Once inland, we spy a local Kipungani lady. She has a palm frond and is hitting another dead palm frond hanging from the tree (a little like serving the ball and swinging at a tennis game).

Then her frond connects with the one above and she starts to twist.  She continues to twist for quite some time, as she stands in what is now the hot sun.  Then with all her might, she gives an almighty tug, and the coconut frond releases itself from the tree and falls to the ground.  She finds another and repeats the process.  This is her job.  She is collecting the fronds to dry and then they use them to make the roofing for their houses, or it is sold to the mainland. 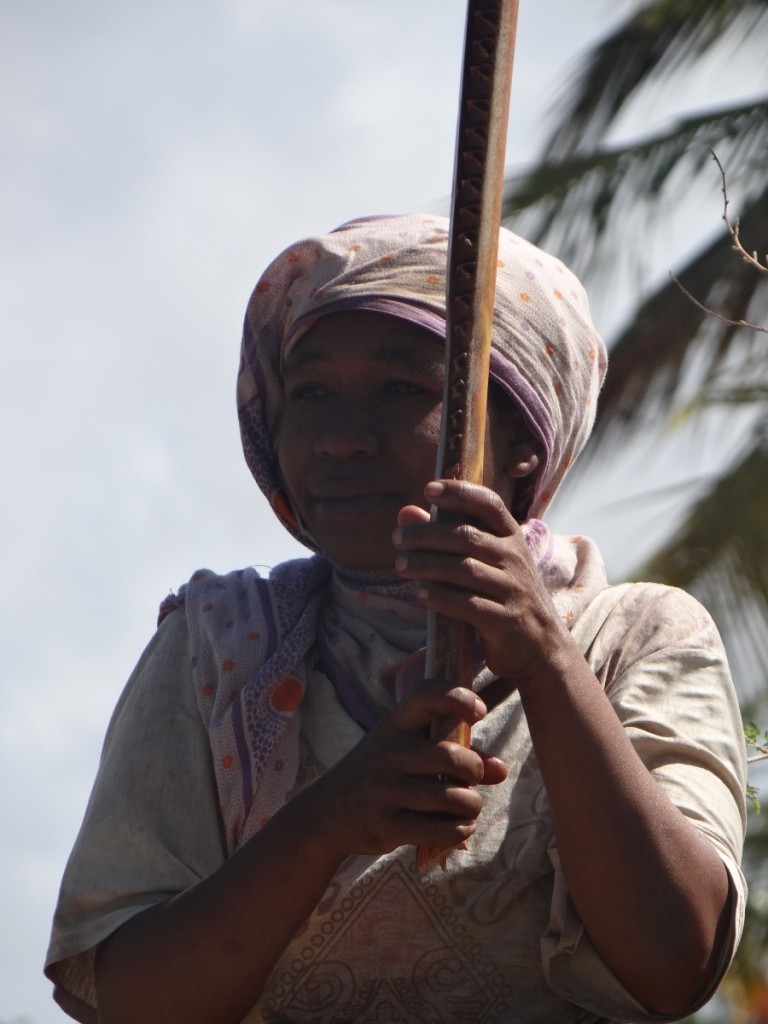 I will never look at an African thatched roof the same way again.  Hours and hours of labor has gone into collecting the plant matter to make them.

As we continue to walk, we realize our one bottle of water will not suffice – it is really hot now.  Not only that, but our bare feet can’t cope with the burning heat in the sand, exacerbating the fact that my toes now have an allergy to Doxycycline – the anti-malaria medication we are taking, and it has produced burn-like symptoms around my cuticles on both toes and fingers and the heels of my feet.  So walking in the heat has now become painful as my feet sink into the burning sand with each step.

We throw our shoes back on and plod on, and are both rather pleased to meet the chief (named Mohamed) of the village.

The first thing I notice about the chief is how young he is. Maybe in his thirties, I’m expecting an old man like the chief we met in Fiji. The second thing I notice is he is wearing a modern top and baseball cap, but he is also wearing a wrapped fabric known as a Khanga, and not trousers. And the last thing I notice is that he has a small bullet like a hole in his spectacle glasses, and one lens is shattered, and they have been glued up.

Money does not come easily to many of the locals on Lamu Island, and I guess the chief is no exception.

He leads through the somewhat deserted village with several huge Baobab trees. It is extremely locally made timber basic housing – with some also made from coral blocks.

We meet a young man who is making a dhow wooden boat.

We learn how he uses old engine oil to soak into the wood, then he lights a fire and slowly bends it.

Explorason found this interesting for about the first five minutes, but by now he was thirsty and we needed to go and find some water. So he started to lose interest.

We head past the oldest mosque which is around 500 years old I think he says. It is actually the oldest mosque on the island, but somehow he explains Lamu town has taken their glory and claimed they have the oldest one.  Nevertheless, it is maintained excellently and looks mistakingly new. 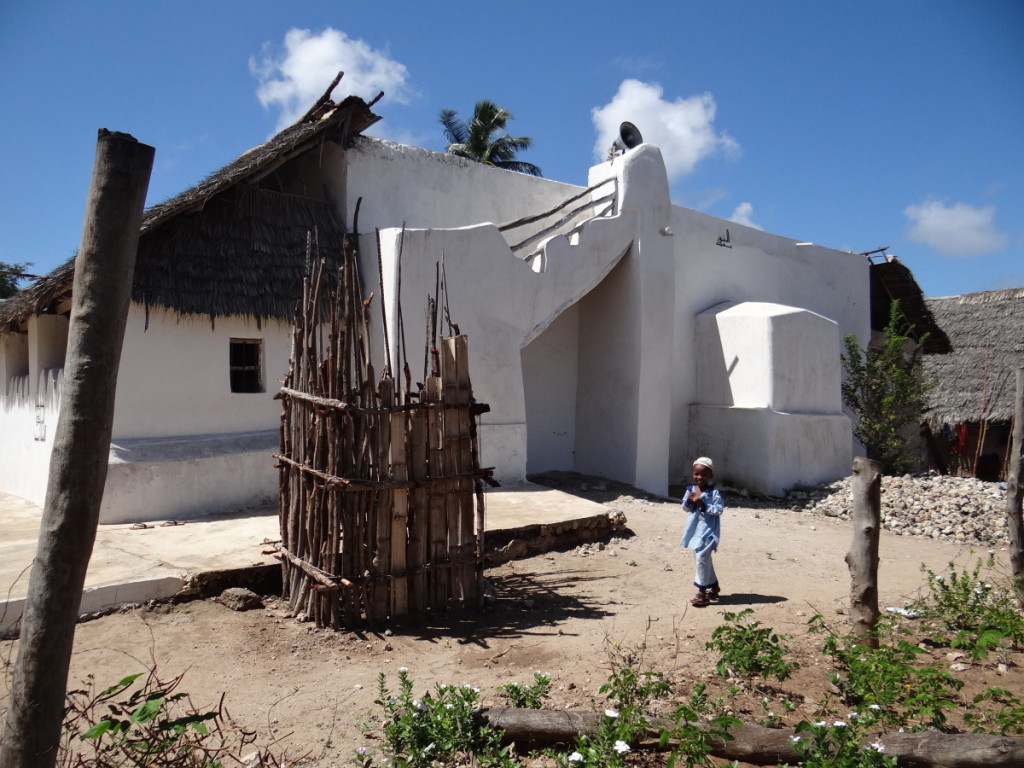 There are a couple of schools in the village. The main school is closed because today is Saturday.

But children are seen at two other schools, learning the Islam faith.

We then meet Ali’s Mum – but this is Ali the captain of our speedboats mother, not Ali the chef. I’m confused – there are too many Ali’s and Mohamed’s I am meeting lately.  Ali’s Mum is adorable.  She makes mats, bags and other woven products for sale.  All our rooms at Kizingoni Beach have huge round mats and we love them. I wish I could buy some and ship them back to Australia.  Some of the woven mats in Kusini House are more than double the size of the one we sit on.

Next Mohamed guides us down through narrow alleys past the all-important water well. It is about now someone races up with a cool bottle of water for each of us, and we are ever so thankful.  I am sure the well water was clean to drink, but it is nice not to have to ask.

A newer mosque is crumbling to the side of us. We are told this was never completed and is around 400 years old.  The paths and alleyways seem to continue to narrow until we are almost sandwiched in between the buildings.

We emerge to meet several men and children.  The men are repairing the boat, and it is like the equivalent of a mechanics workshop, minus the cars.

We see men prising open the tops of batteries, and the acid is placed in an old half cut plastic detergent bottle.

He explains they dip during or fishing line into the acid, and then the string is pulled tight and this marks the line on the timber.  This guides the carpenter how to cut his wood, and is used for the furniture and boat making techniques.

The boys sit making their little boats to play with. The center boy in the brown t-shirt cannot speak or hear.  He doesn’t go to school. He used to go to a special school on the mainland, but he came home very skinny after his holidays, and the parents discovered they were hardly feeding the children, and mistreating them.  The boy refused to go back to the special school, so now he has no education.

The inlet before us has no water. We learn that at high tide the locals strategically place nets and as the tides go out the fish are trapped. It is an easy catch. Maybe Explorason should have tried fishing down here? 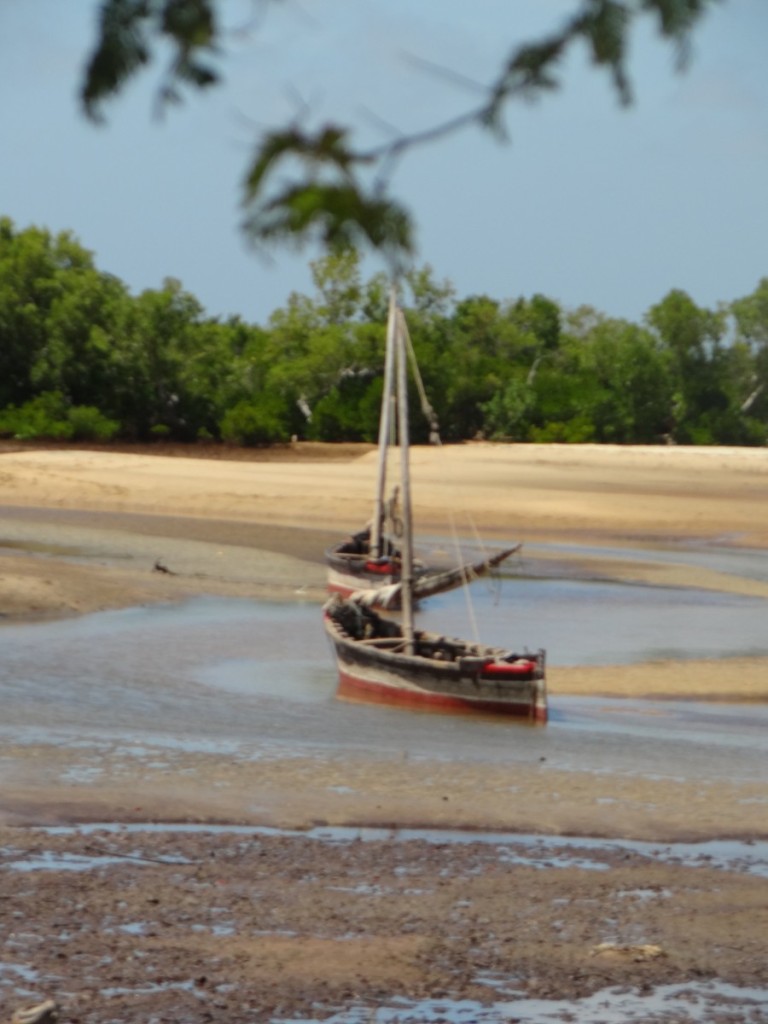 Explorason is now officially tired, hot and hungry.  We thank Mohamed the chief for the tour and make a small donation to the local school.  My son is ready for Ali the chef’s latest lunch creation back at Kusini House.  He and Daniel wait as the Captain arrives with the speedboat. 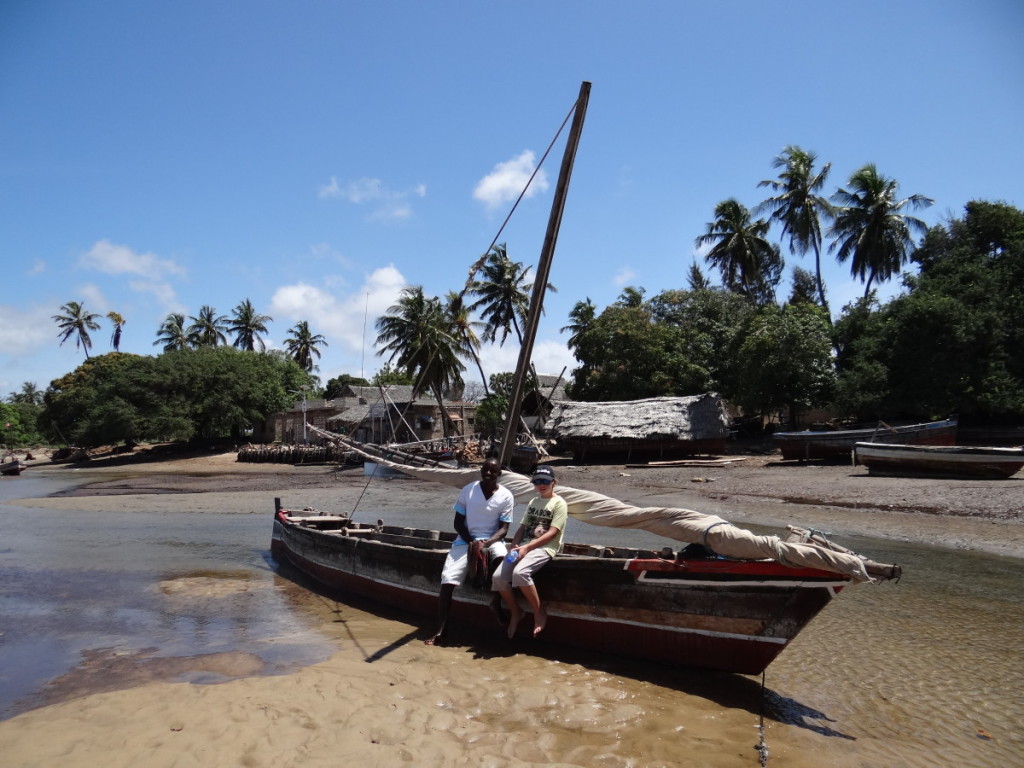 Some say Lamu Island is the last hidden paradise – come and stay at Kizingoni Beach and see for yourself.

Kusini House staff be happy to arrange a walking tour like this, or …