It is a beautiful day as our speedboat heads toward the tiny capital of Lamu Island, known as Lamu.  We have booked one week on Lamu Island, and are staying about 25 minutes boat ride away at Kizingoni Beach (you can read about that here). It is located directly across the mainland of Kenya on the northern coastline.

Today we are excited to explore Lamu. To learn by way of world-schooling about the people and culture of this little traditionally Muslim African town of Lamu.

And as we arrive, it is like stepping back in time.

We are dropped at the pier by our captain and have no idea where to head, so we asked for the market, thinking that would be the central hub.  (Kizingoni Beach did ask us if we wanted them to organize a guide, but we wanted to get lost in the lanes, and alleys by ourselves.)

It is a tiny place, but with virtually no tourists, so it was a strange experience wandering into the town square.

Local men sat around sitting under the shade of a tree and talking to each other. This seems to set the scene wherever we go in the traditional world.  I remember a similar scene when we were in Guatemala, and memories came flooding back of our time there.

Lamu Island has no vehicles. It has donkeys, and they are everywhere.  They seem to trot along – loaded or unloaded – with quite a speed along the alleyways, and I had to approach corners with caution.

We also had to watch my step for soft pavement.

Next thing we knew we had walked right into the middle of the undercover fruit and vegetable market.  Had we been using Airbnb or renting an apartment, this would be the place to find fresh produce.

Most produce was locally made and included a man selling mats and woven items, along with wooden boats made in one of the island’s villages.

We continued to wander aimlessly through the maze of alleys and found the ladies in a separate section chatting. Some seemed to sell vegetables – we imagine they were grown by their family.

We decided to try to find some touristic shops and locally made items that might be of interest. We have found Kenya, in particular, to be very focused on recycling. And we found a great store selling flip-flop/thong art made with recycled wood.

Because everyone walks, the pace in most areas is laid back.  We, however, didn’t realize Lamu town closes for lunch for 2 to 3 hours, and because we had been dropped off by boat we were stuck here, and we struggled to find anywhere open in the heat of the day. 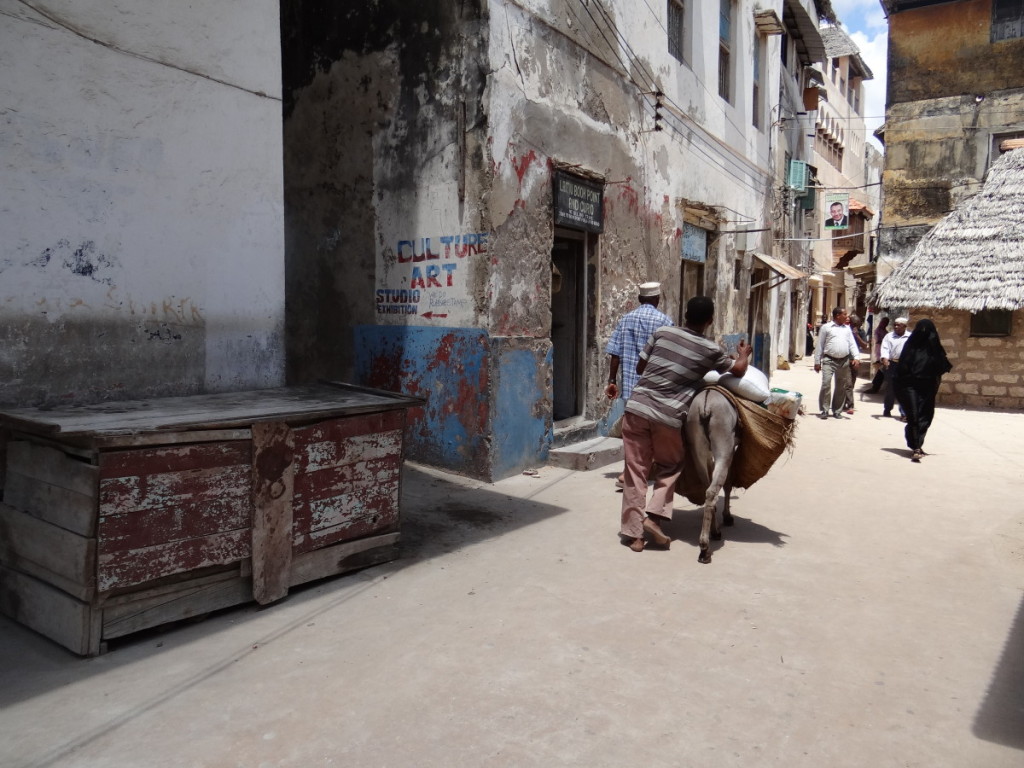 We did, however, find the donkey sanctuary. It has been established to ensure the donkeys are well treated on the island. Being the primary source of transport, this is important. 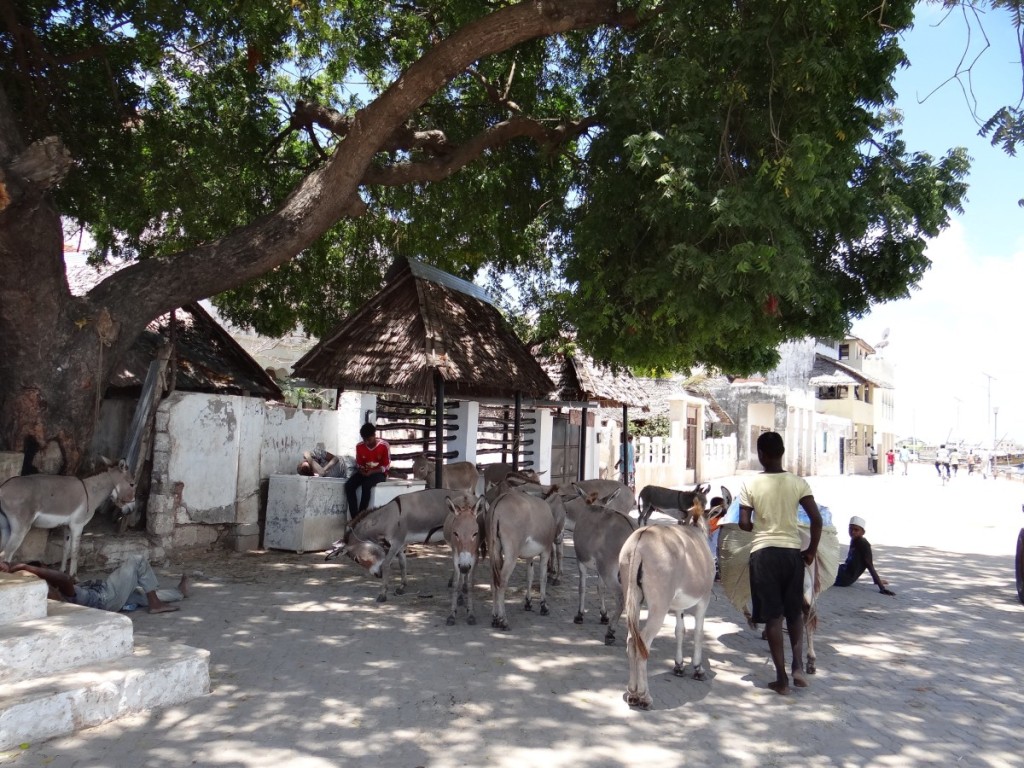 Wandering along the water, it was hot and with a light breeze.  Canons are still in place with a strong focus on the history of the island here. There is a museum they say that is well worth visiting, but we declined – after 60 countries museums have somewhat lost their appeal for Explorason. 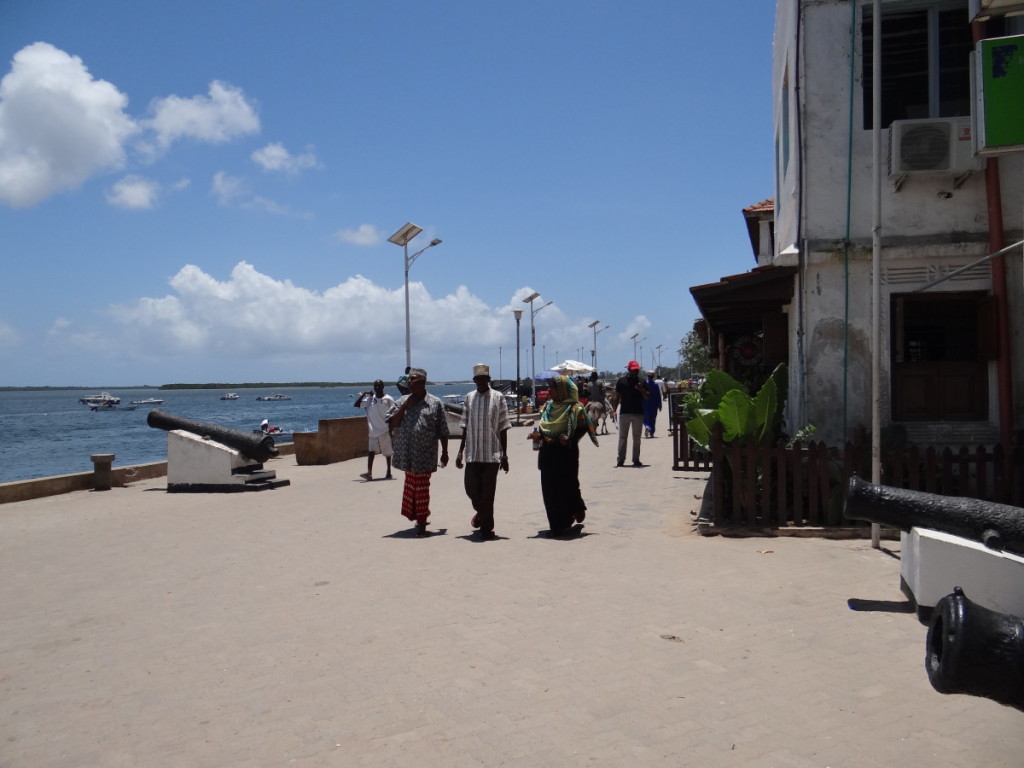 I watched as they loaded boats at low tide. Africa in a lot of ways has changed very little over time. And I like that about Lamu Island.  It is a place where time seems to have stood still, and in some areas that we had indeed stepped back in time, and there is little fuss about modern times and all that associated stress.

We did, unfortunately, get hassled by a guy on drugs here in Lamu town. He tried to step in when we were at a little store buying toothpaste.  He spoke English, so pretended he worked there to us, and he was our friend to the shopkeeper.  He was putting the price up 4 times as much, so he could get some money. We wised up on this and asked him to go away. Finally, the man opposite assisted us, but it was rather unpleasant because he was ‘wasted’ on drugs and he abused us.

So we popped into a fabric shop and told the owner, and he said he knew the drug addict man and would protect us.

I had some Kikoi fabric with me and wanted it made into trousers, so we had a fitting and sat down and chatted to the guys, so turns out to be a great shop we chose to pop into for refuge.

Then one chap used a treadle sewing machine to make the wrap trousers for me.

Meanwhile, we made a cool video talking to the guys about the animals they used to hunt and eat in Africa. Wild stories with a bit of wild imagination, and we were laughing hysterically.

We left Lamu town about 2:00 pm and it was still quiet and walked back down to the water where we somehow managed to spy our captain early.  We asked him to then take us to Shela Town a little further along the island’s coastline.

We arrived, and I headed up a tiny alleyway. This town is far more touristic with a lot of little stores as I weave through the back alleys. I liked it, but it is way more expensive than Malindi.  Still, with my heart set on some items I’d seen at Kizingoni Beach, I was determined to find a few treasures.

And I succeeded!  My favorite was this hand-beaded net food cover.  It was just like we used each day to cover our food when it was served at Kizingoni Beach, and I was delighted. In fact, this was one of the items I search for and will be a memory of Kizingoni Beach and Lamu Island when we finally set up our home.

We then finished our shopping, and headed back in the speedboat to Kusini House in time for an afternoon swim, and later a cooking lesson for Explorason.

Meanwhile, I headed off for my sunset walk on the beach, watching the crabs scamper in and out of the water’s edge.

It was a perfect day, and Kizingoni Beach was the perfect place to end it, with a delicious dinner on the rooftop with the stars above us.

I’m in love with Kenya.  Today I feel like I stepped into a part of history and soaked up the culture, tradition and the warmth of the Lamu people.

Come to Lamu Island.  It is like stepping through a door back in time.