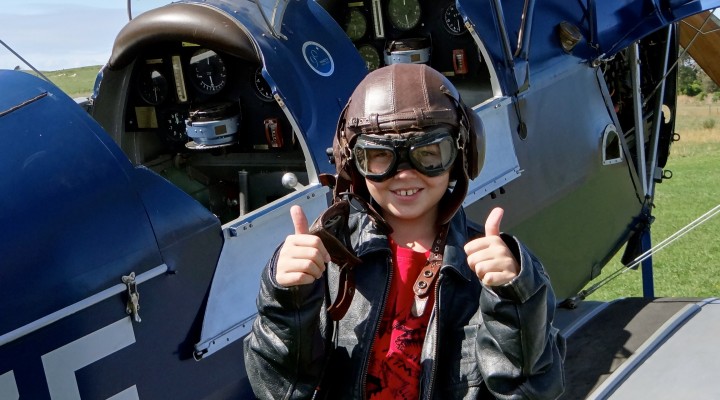 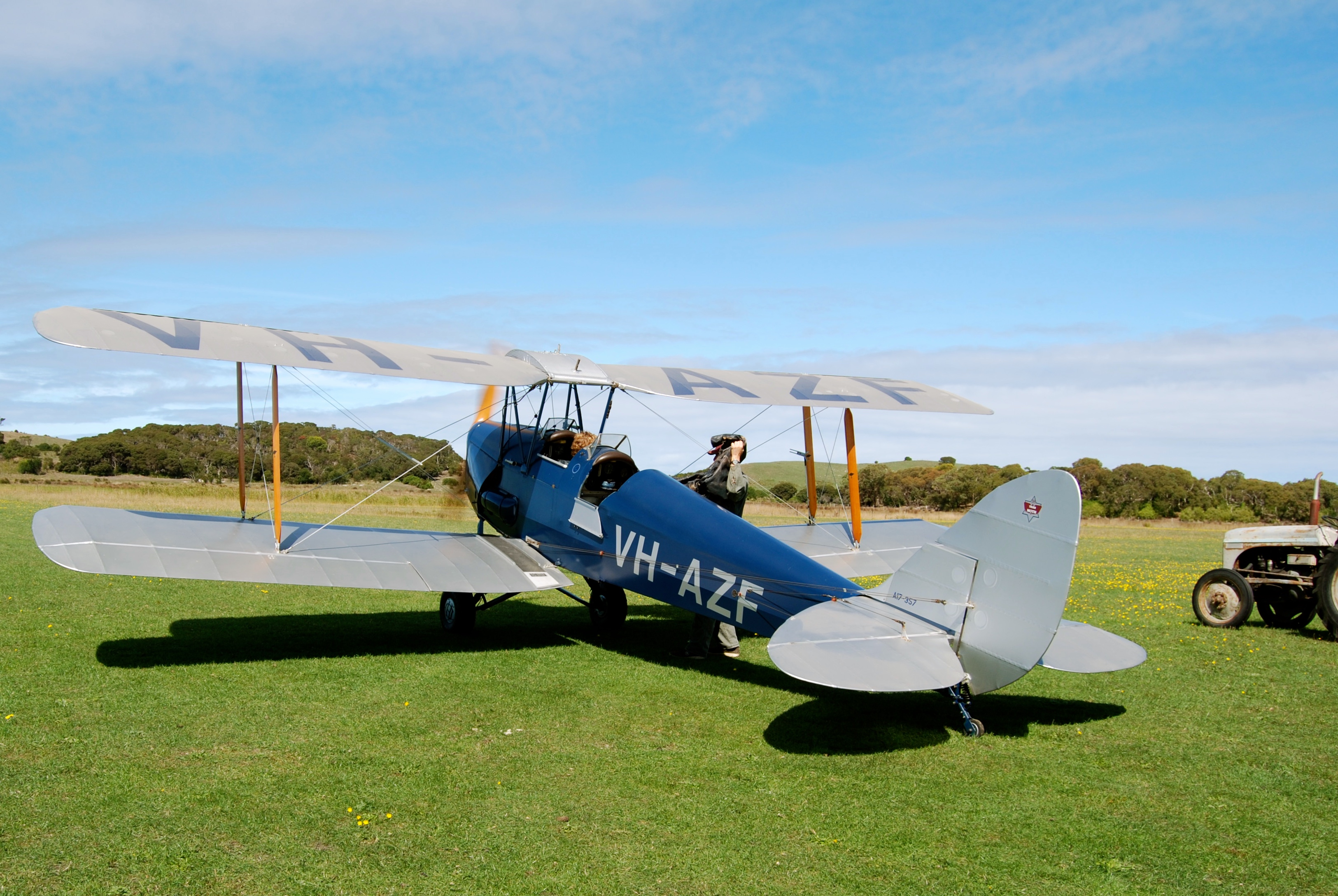 Being back in Australia means it is giving us an opportunity to explore our own homeland. A rugged and often barren land that I grew up in. With camping trips away nearly every school holidays, travel and exploring were birthed within me, in a way, by my parents.

It’s school holiday time, so we’ve just spent a few nights staying at The Bay, Glenelg – one of the prime touristic regions of Adelaide, a suburb I once lived in, but this time exploring it through new eyes.

Being back in Australia has also given us an opportunity to catch up with some of our friends. Some friends we have not spent quality time within a very long time. 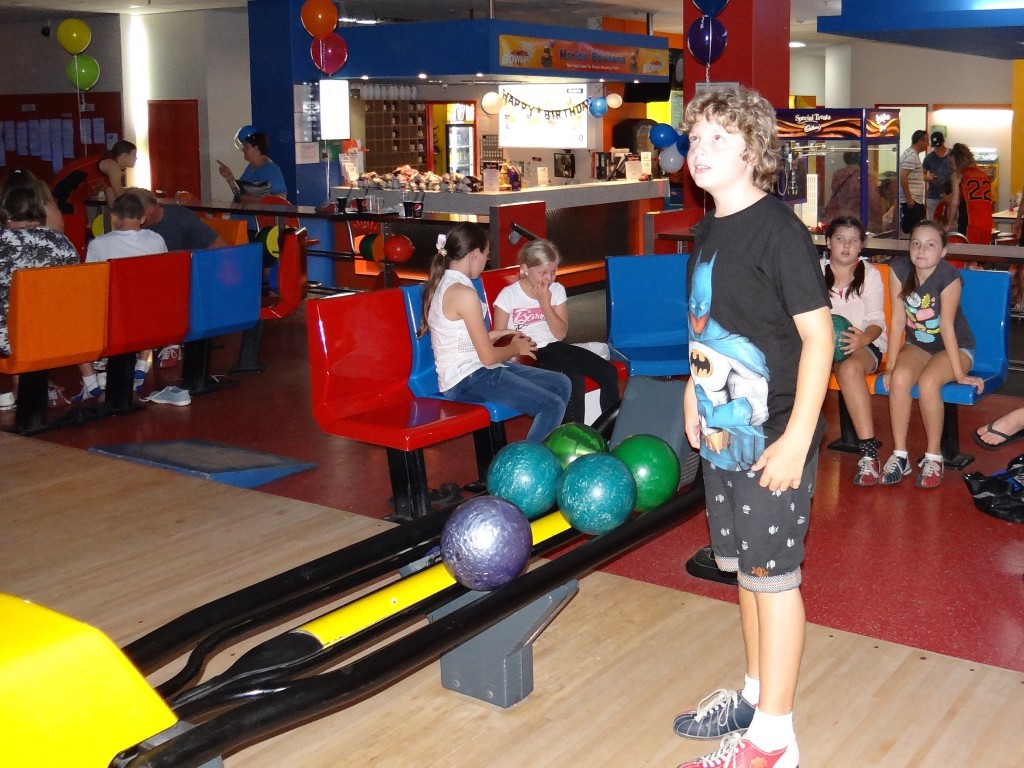 ©Exploramum and Explorason – Explorason’s 11th Birthday – bowling with some friends

For Explorason, this was pretty fun for his 11th birthday in March 2016. Whilst he has enjoyed exotic birthdays ‘on the road’, it is nice to catch up with some of the kids he has known from shortly after birth, and on into school years. 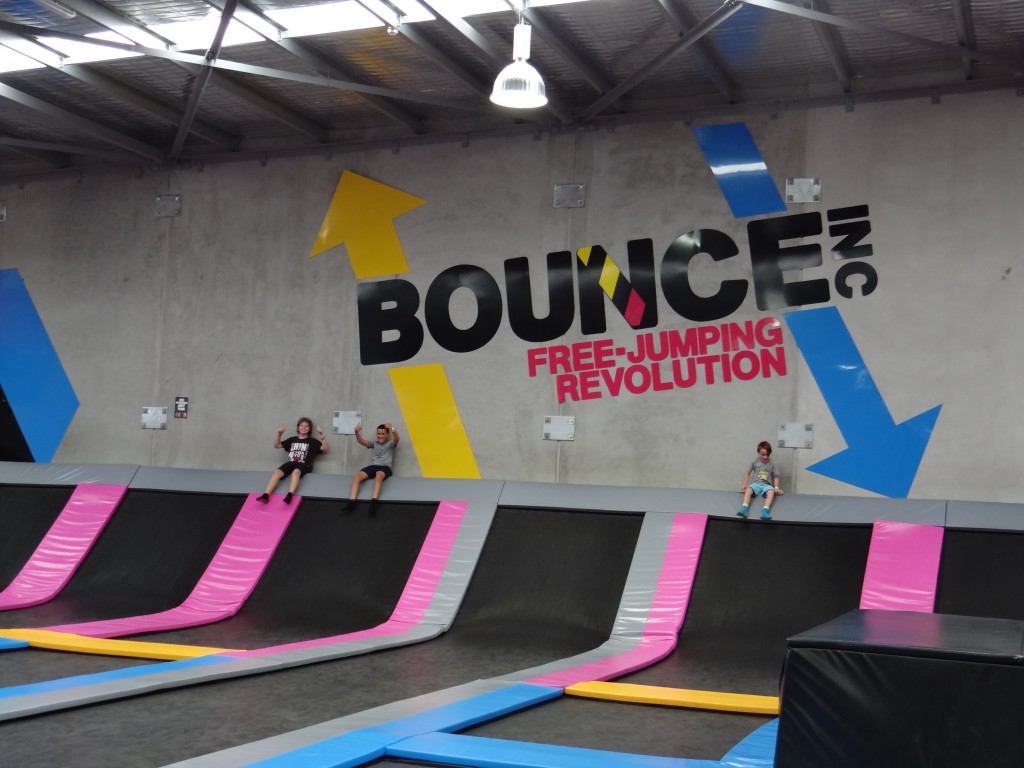 He enjoyed a bowling party and then he and a friend went to Bounce – a giant indoor trampoline park, followed by dinner. 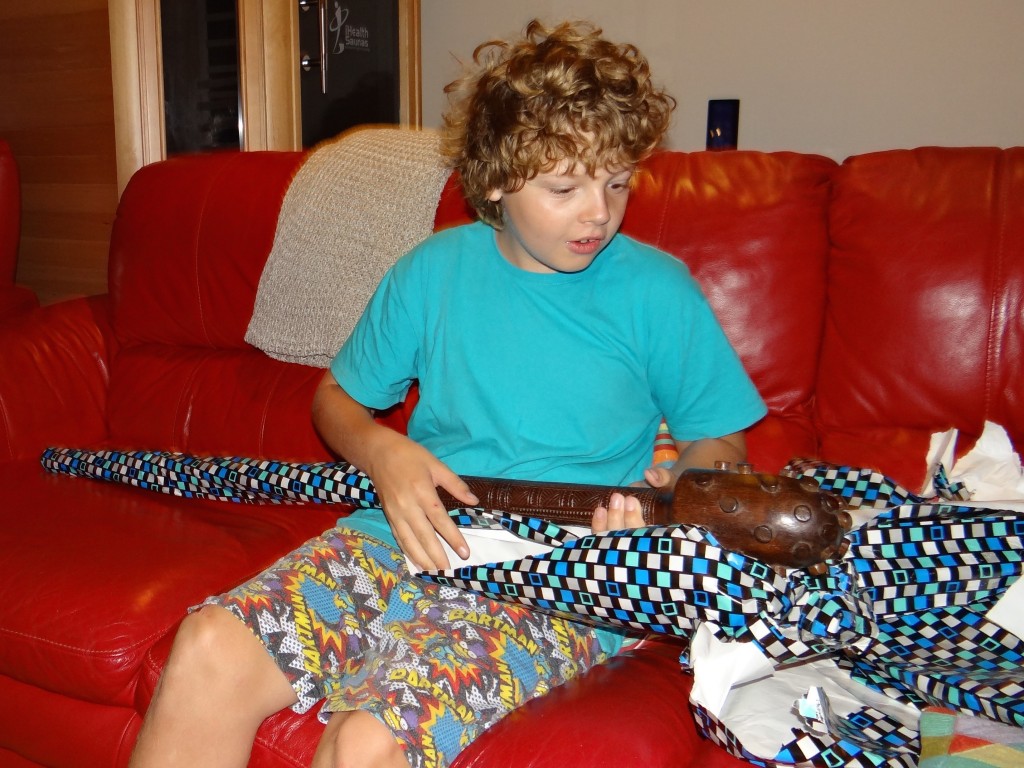 It was also fun to have stashed away gifts for him from some really interesting places we visited on our world journey. Explorason loves collecting tribal weapons, so this Fijian Club was well received! Not your average 11th Birthday present from your Mum.

Easter has come upon us, and it was time for me to reunite with a friend from my childhood.

We’ve hired a car, and set off via Keith with a lovely lunch served by my niece at Keith. 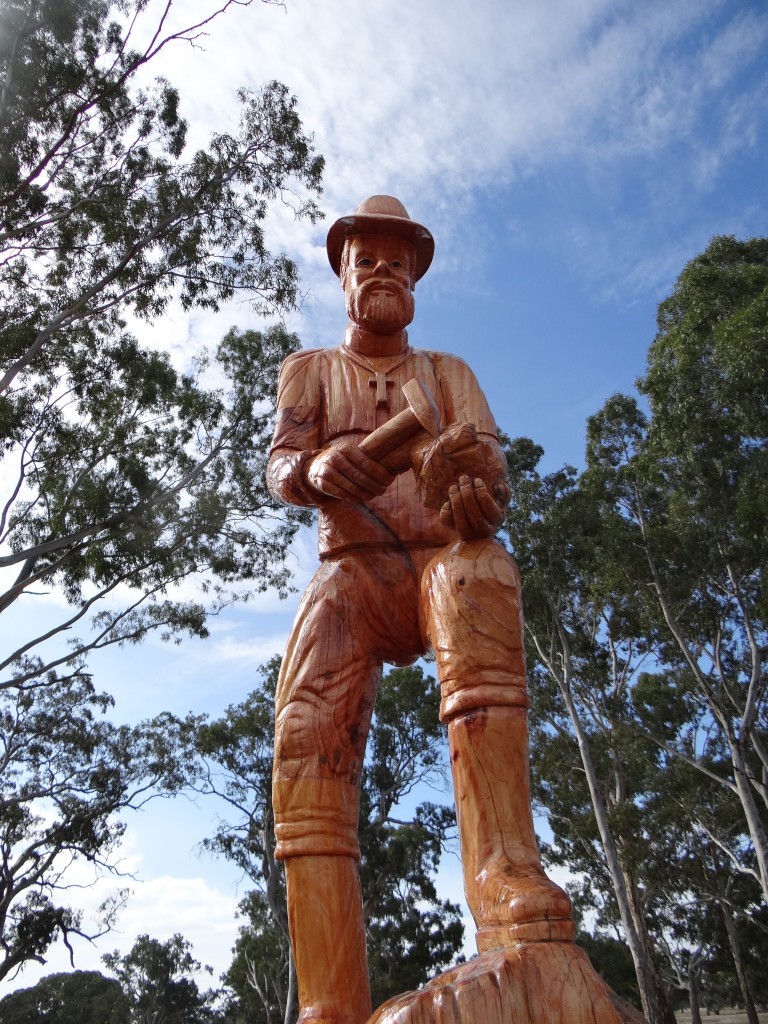 ©Exploramum and Explorason – driving through the Coonawarra region

We selected the Coonawarra region to drive through on our way and stopped to enjoy the new wood carved display of Father Woods. He was an inspiration to the area, helping the underprivileged and isolated children with education.

It was a grey day, so the famous Blue Lake at Mount Gambier proved to not be so blue. 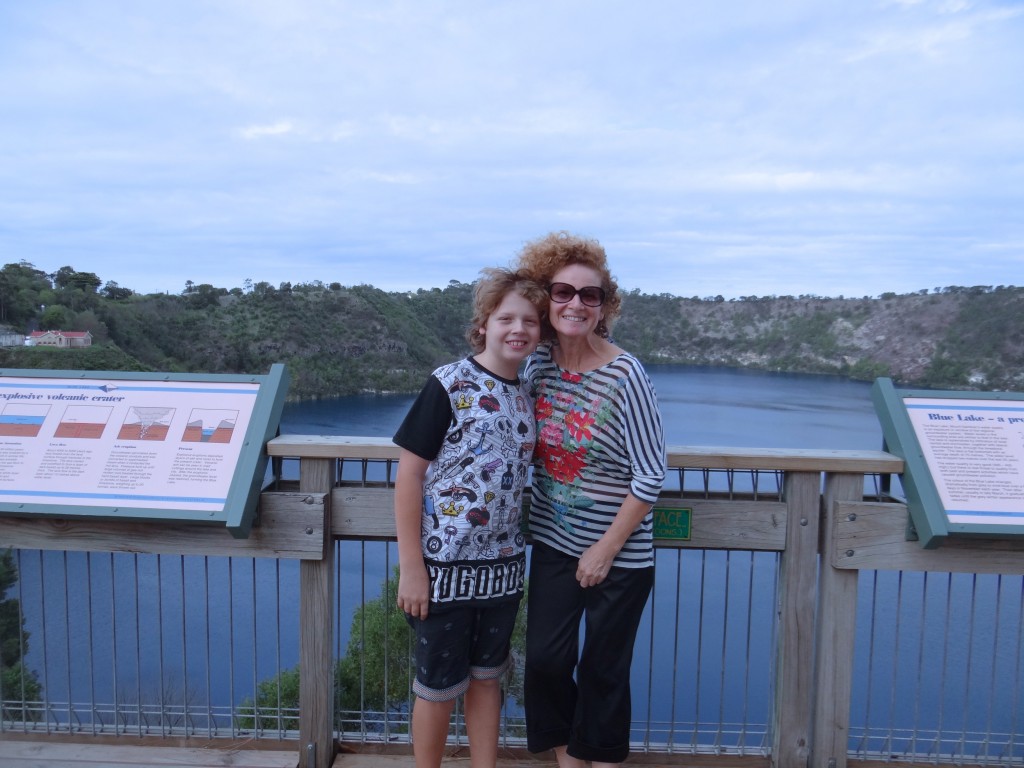 Explorason LOVES photography, and hopes to be a photographer when he ‘grows up’. As a parent one thing my wonderful mother instilled in me, was that I could choose to be anything I wanted to be. To give things a try, and to follow my heart and passions.  I am ever thankful for her, because I find this all too rare a gift, and is also what I wish to pass on to my son. 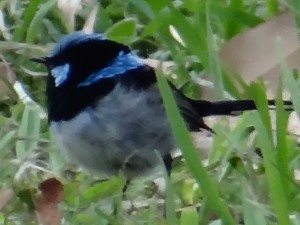 If he wants to be a photographer, then I will do the best I can to help him on that road.  If his desire changes, then I will support that too.

So here we stand in awe of a volcanic lake, and he is spending time zooming in his lens on a bird.

He found the Blue Wrens more exciting to photograph than the Blue Lake.

However, it was just a quick stop as the day was drawing to a close.

We arrived at our friend’s new beachside townhouse apartment at Port MacDonnell after a 5-hour drive, and Explorason was pretty excited to be offered his own bedroom, and he neatly unpacked his clothes into the wardrobe, which quite impressed me – I must say.

Our hosts have recently purchased this future holiday rental, and the new nautical feel decor was so fitting and garnished with impeccable taste and style.

Small treats awaited us making us feel like special guests, and the ambiance was so wonderful and relaxing. 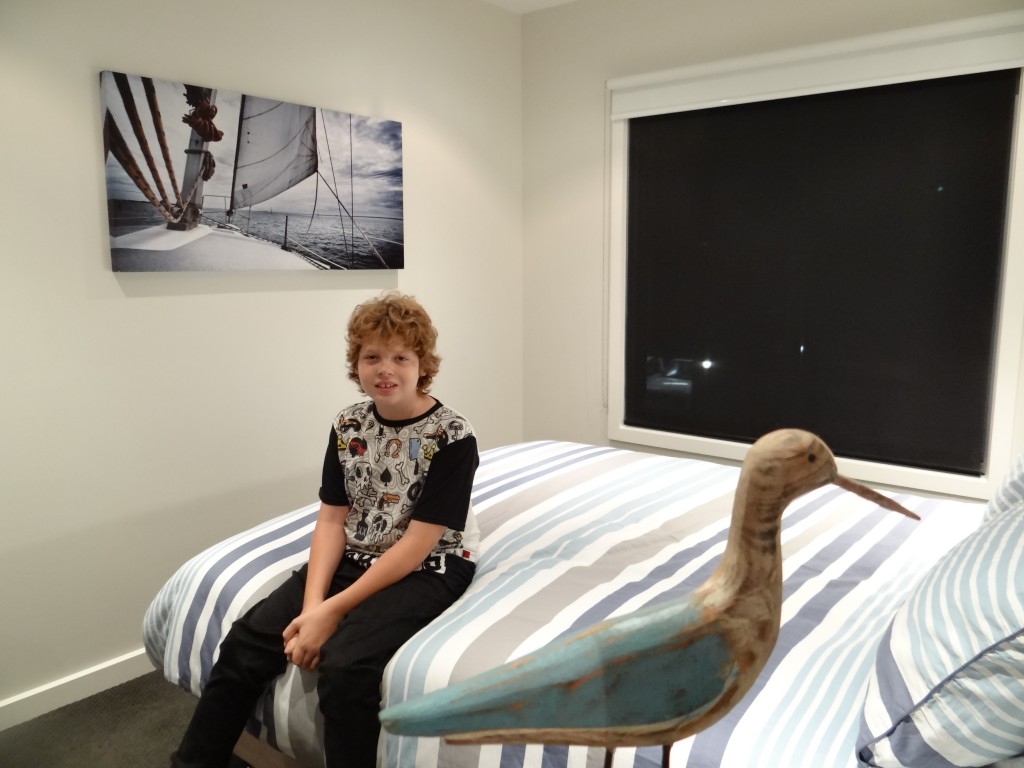 It was lovely chatting over dinner and reacquainting ourselves, and with two pilots in the home, tomorrow sounded exciting??!!

After a relaxing the next morning, we bundled their two dogs into the car and headed across the border to the State of Victoria.  Explorason is a complete dog lover, and he enjoyed cuddles in the back seat with their poodle, Coco. We miss our dog Coco, but in 2013 we found out our petsitter refused to give her back, then she moved and we’ve tried to find her for years with no luck.  But we will never give up, but now there is another Coco, we really, really miss our Coco. 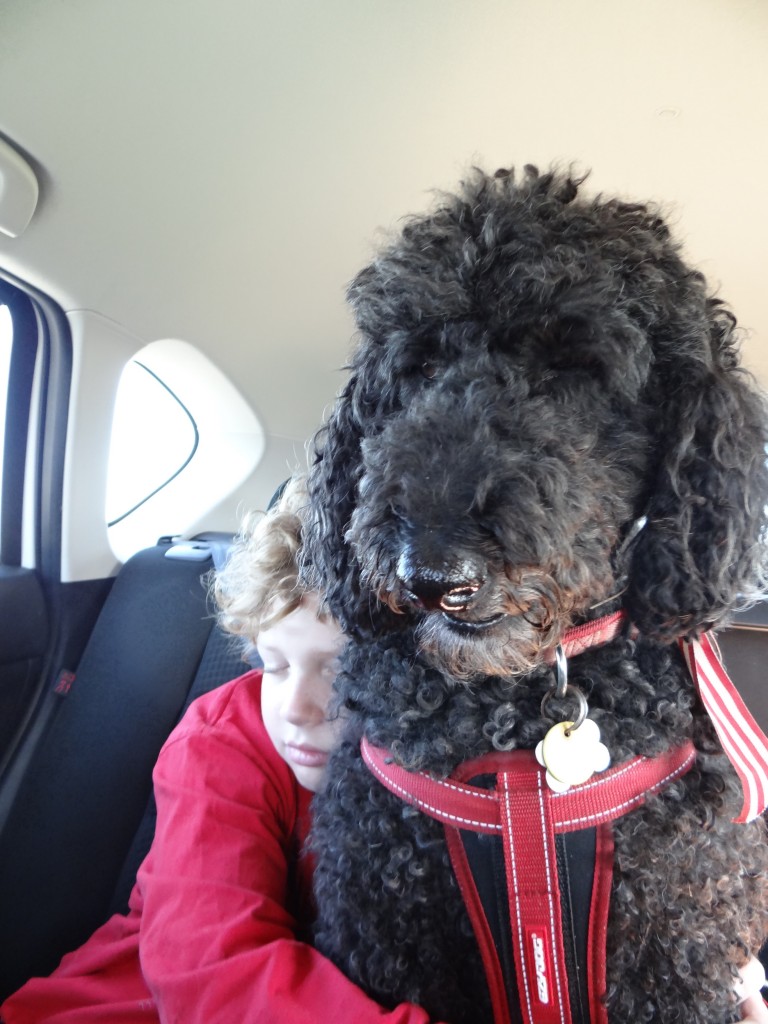 ©Exploramum and Explorason – Driving to Victoria – Explorason and Coco sharing love, and the back seat

We hit a tiny, dirt path, and there before us was this beauty in all her glory – De Havilland 1941 Tiger Moth. 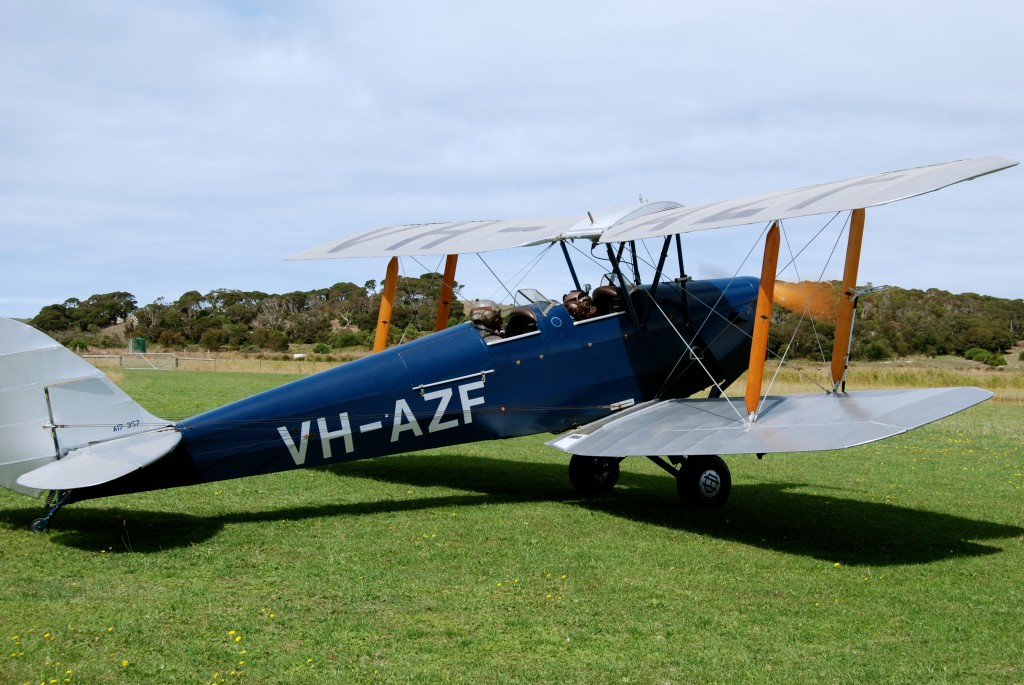 As a qualified airline captain, we felt very safe in the capable hands of our pilot.

He is a very careful pilot, and a lot of attention to detail not just for us as individuals, but also for his carefully restored Tiger Moth that he has owned (and has flown throughout many parts of Australia) for decades. 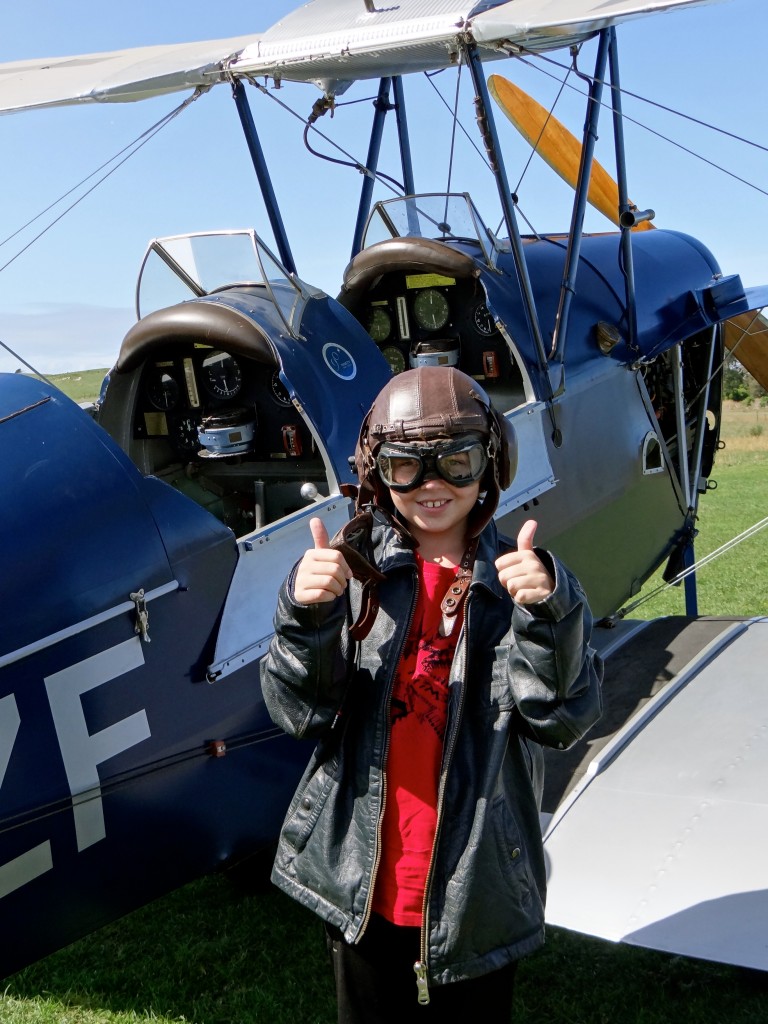 Explorason headed off first, eager to have a flight.

Not many people in the world would get this special opportunity, let alone an eleven-year-old kid.  He leads such a special life and has managed so many amazing experiences, that all form part of his education, and this is another rare and special moment in his childhood.

He was quite excited, but as the checks were taking place, he became a little nervous. 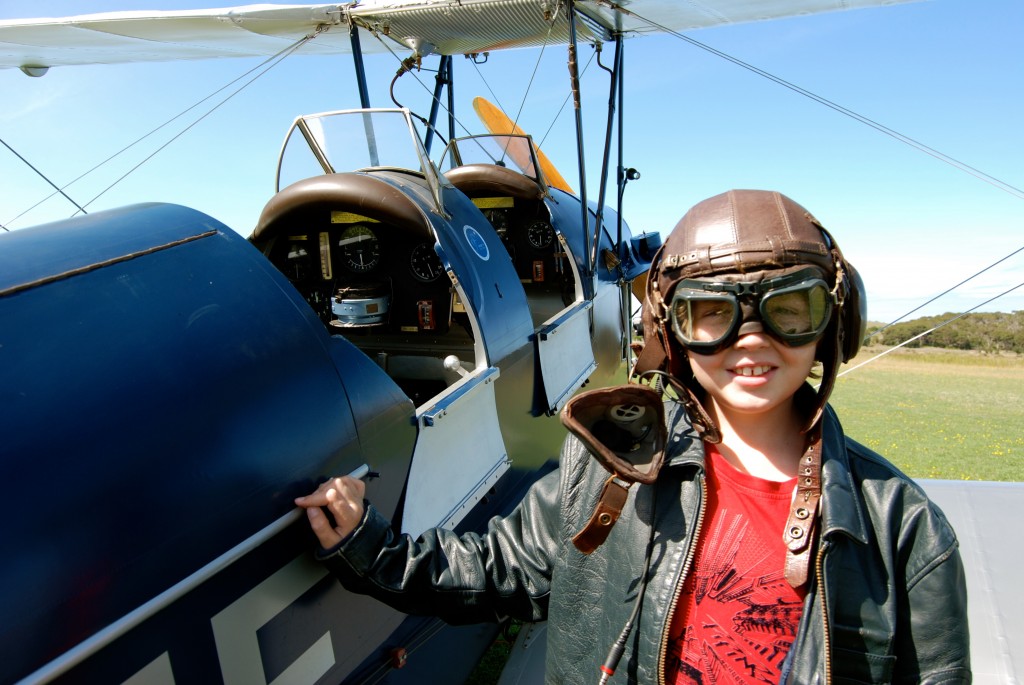 He really looked the part in his leather helmet, goggles, and jacket.

A young pilot in the making; who knows?  As his Mum, I always encourage him to try new experiences.  In doing so, he will learn what he does and doesn’t enjoy, and what then grows into a passion.  I then hope his passion forms into a life experience for him.  If it changes along the way, so be it but I always give him the opportunity to learn and experience.

For him, flying in a vintage open airplane – 1941 De Havilland Tiger Moth is indeed a very rare and treasured experience. 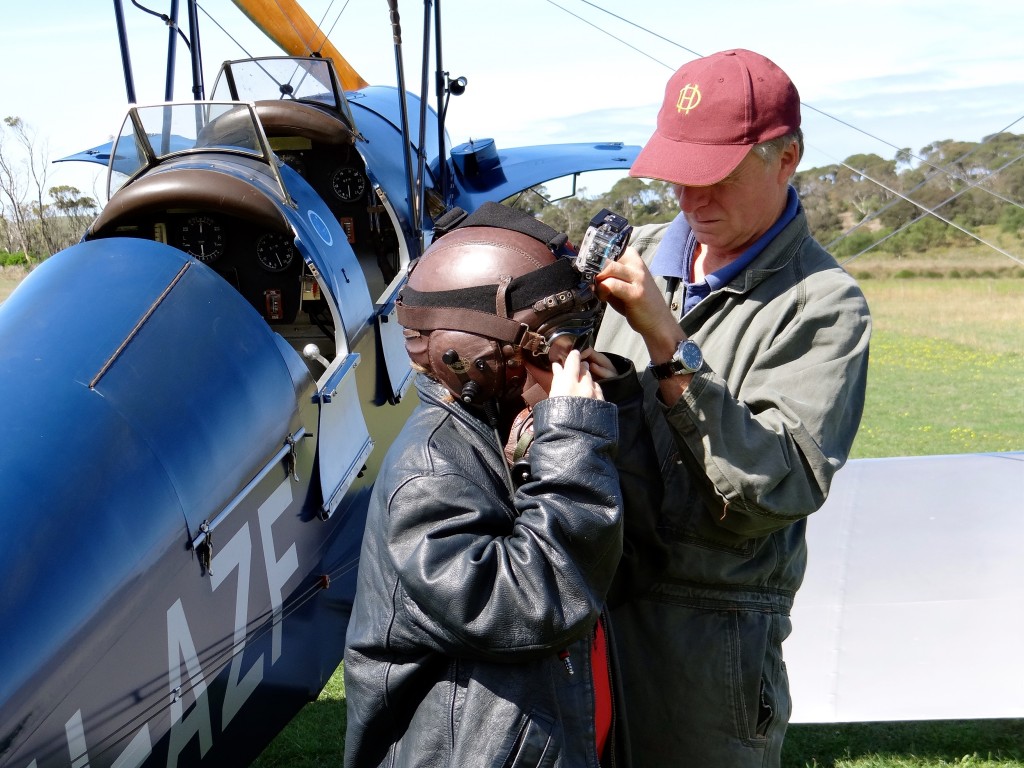 ©Exploramum and Explorason – setting up the Action Camera on his helmet

With his Action Camera attached to his helmet, he was ready to take flight.

He was securely harnessed in, and instruments etc. were all explained to him.

He set the date incorrectly but overall I think he did a good job.

As the Tiger Moth ascended, I felt a little pang.  There goes my son. How he has grown up so fast.  Now 11-years-old and he is going off without me.  I was glad it was with someone we trusted! 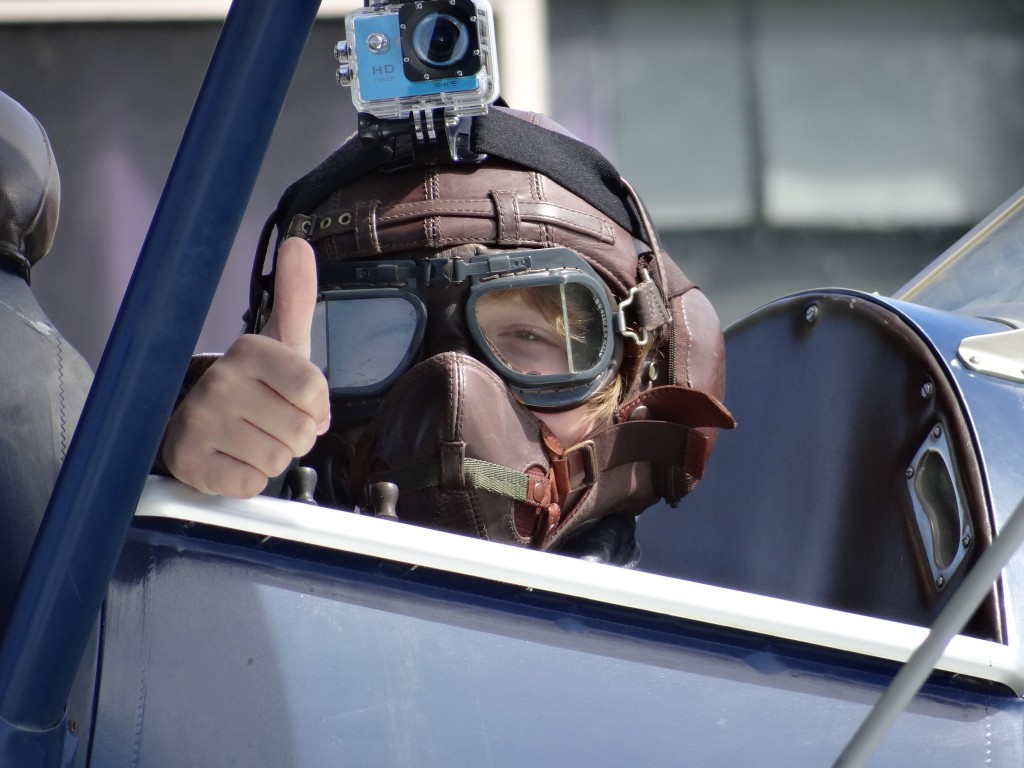 Next was my turn.  I was quite excited -I even thought I would be up for a barrel roll. How wrong I was. 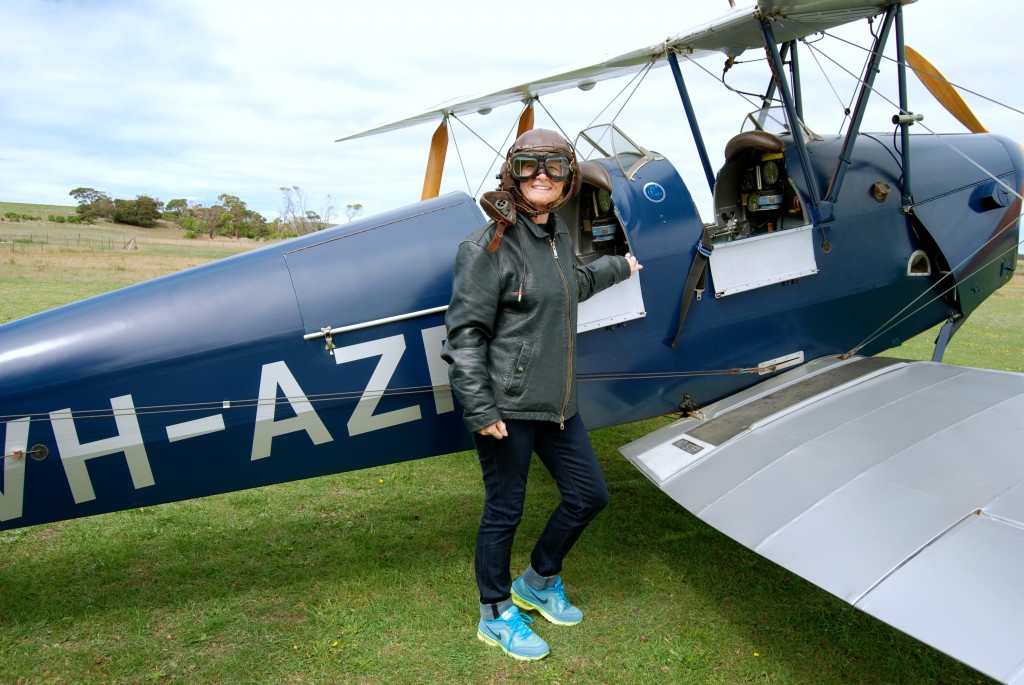 I was fine at first, but we only managed to reach as far as the river, and with a few flyovers and circling, I felt extremely ill.

I spoke over the intercom to the pilot and explained my plight.

He then talked me through it, keeping my eyes on the horizon, and explaining how to fly the Tiger Moth in detail.

I managed to hold myself together and felt like I really let myself down. But at least I held breakfast in place in my tummy. 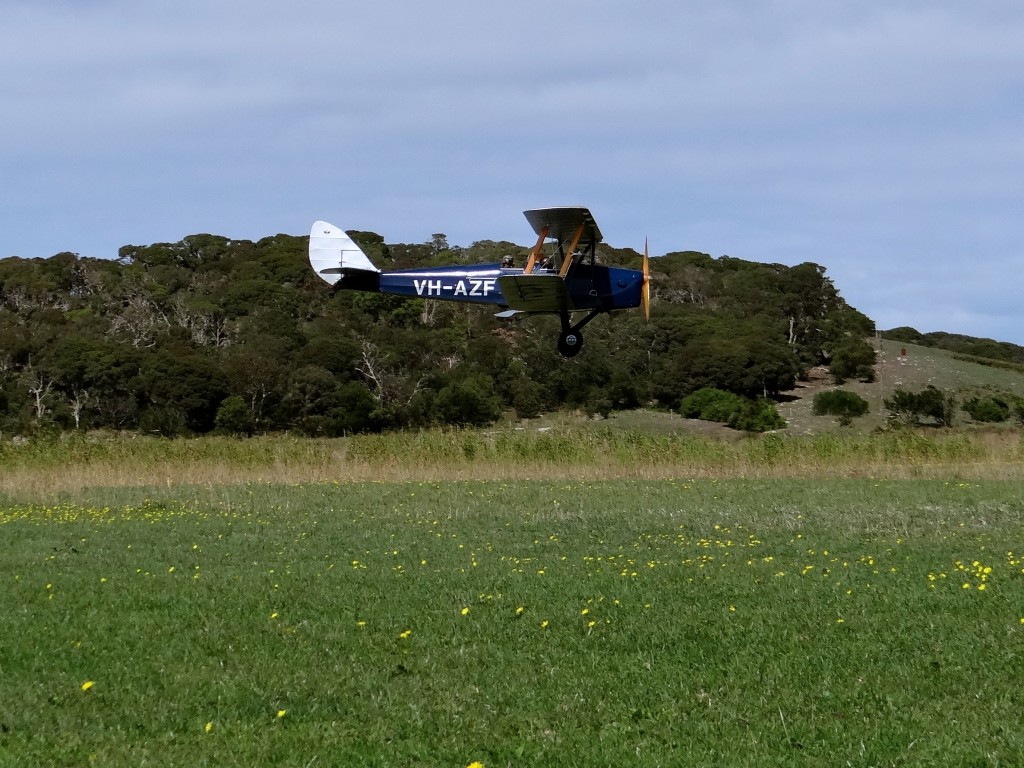 We returned back to their seaside apartment and I needed a good lie down while Explorason played with Coco.

With lovely guests joining us for dinner, I was that I no longer had nausea was no longer there, and finally, the headache subsided as the evening progressed.

To my delight, one of the guests makes tiny wooden Zen Seats or Shoulder Rests from parts of wine barrels, and I admired his handiwork that evening.  He returned later in the weekend with a gift for me – my own specially numbered Zen Seat – thanks ever so much John – a very treasured memory.

Naturally, we ate seafood that evening. Port MacDonnell is a growing fishing village and tourist town on the coast about 30 minutes from Mount Gambier, and it is known for its awesome fishing.

As we sat around the BBQ, it was delightful to feel the love and friendship of these special people.

It was also really special that Explorason and our host shared several sessions of ‘boy time’, and ‘we girls’ went off shopping, and for a coffee, or a leisurely drive along the coast. 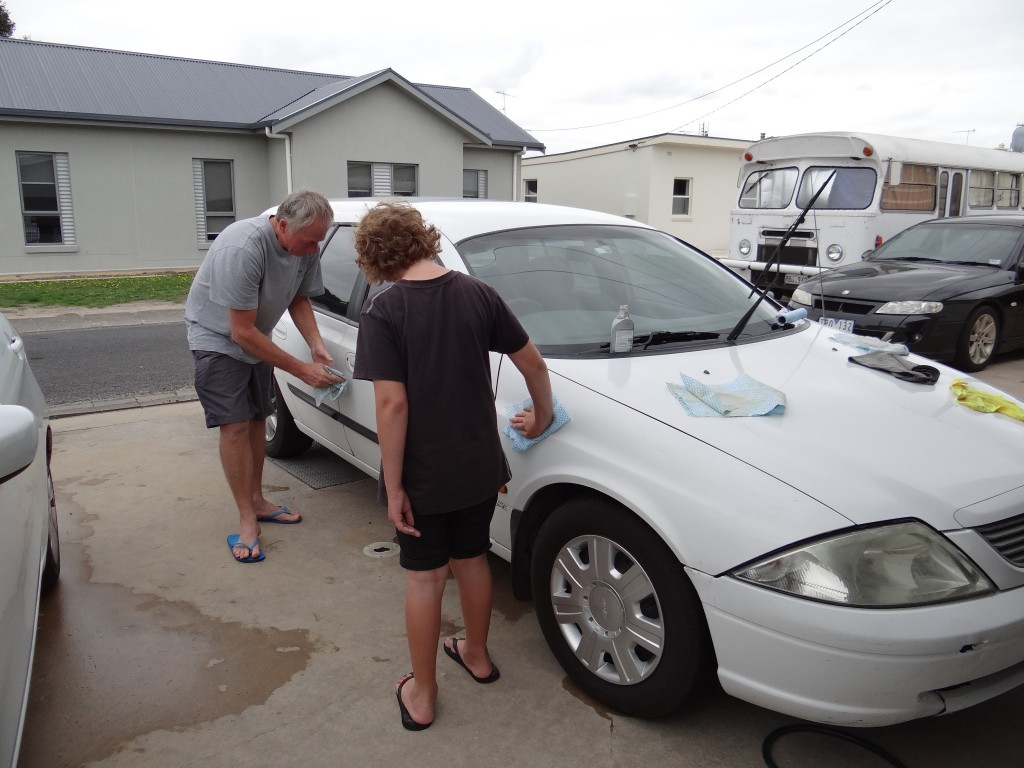 On other occasions, we’d take a walk along the shore with their two dogs.

Mainly at this time of year, there is an influx of seaweed, but this served as a great time to find the empty sea urchins.

Whilst we were gone, ‘the boys’ set about polishing their work car. 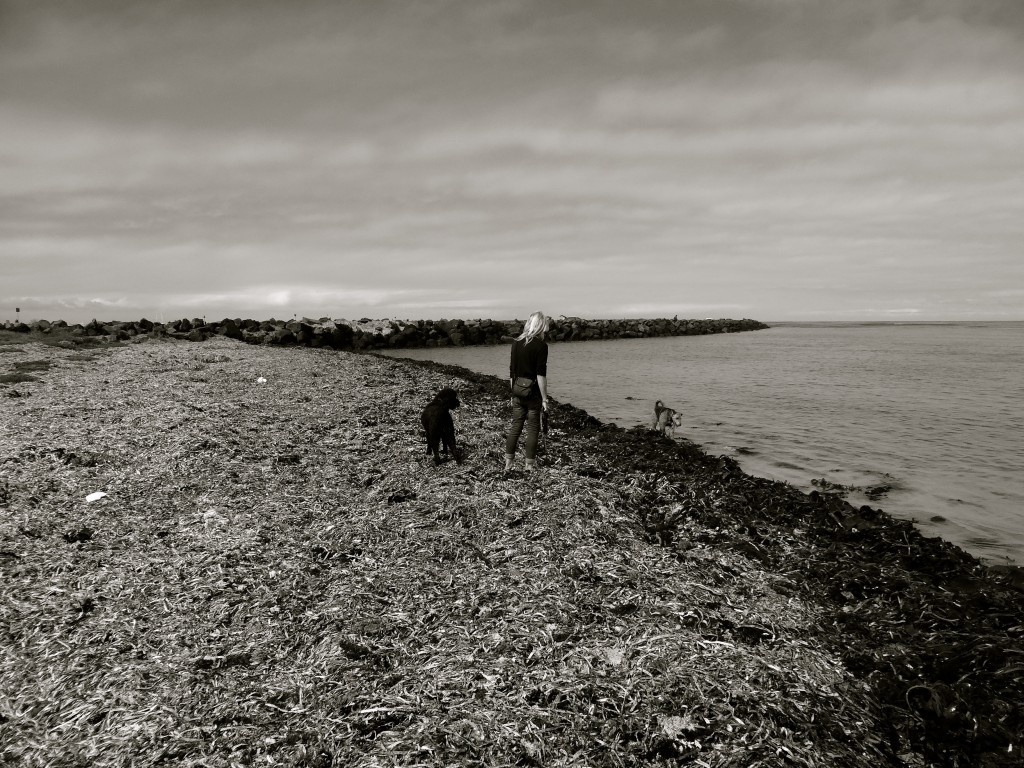 This photograph below is thanks to my friend, but the many varieties of seaweed made the ocean rock pools and sandy shores into a garden of color. 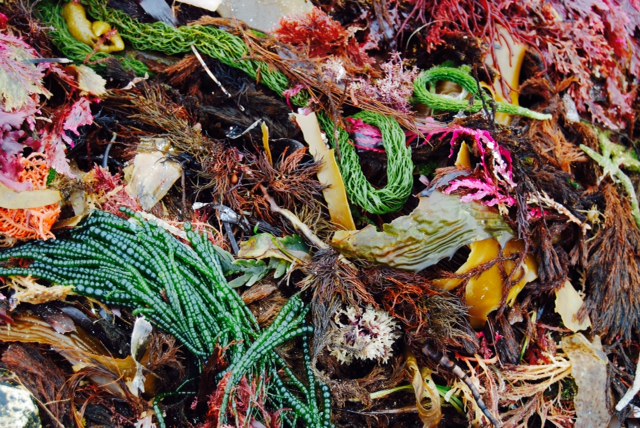 Over the weekend we all helped with a jigsaw, as well as Explorason used his skateboard and made friends with fellow scooter users in the local park opposite on the foreshore.  He also painted eggs, along with drawing and creating his own various watercolor ‘masterpieces’. 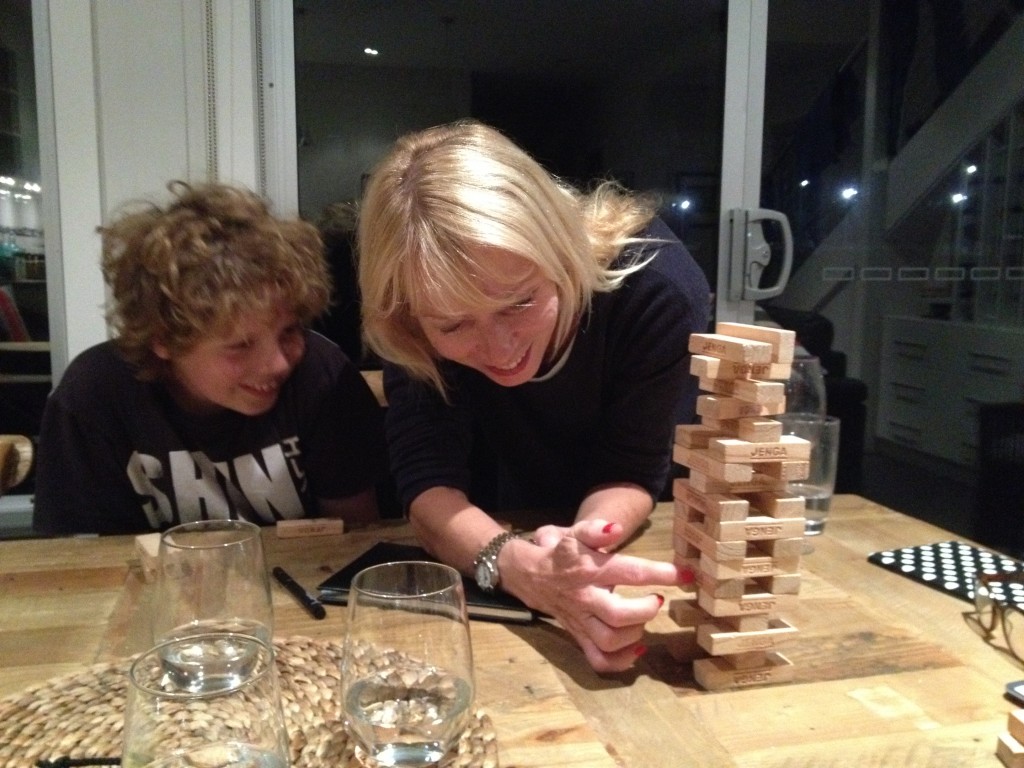 But some of the best laughs and family and friendship times were over a game of Jenga.

Spending time with a child, and allowing a child creativity and play time is very healthy, and makes for a happy child.  It is far more beneficial in my opinion that them staying indoors playing technology or watching TV and movies.

It really was a brilliant Easter weekend in so many ways.

I’d especially love to thank our friends for their hospitality and generosity.

When the apartment is available for holiday rental I’ll be sure to let you know, as it is an idyllic setting for a restful vacation.

It was sad to say goodbye on Monday after such a special time. 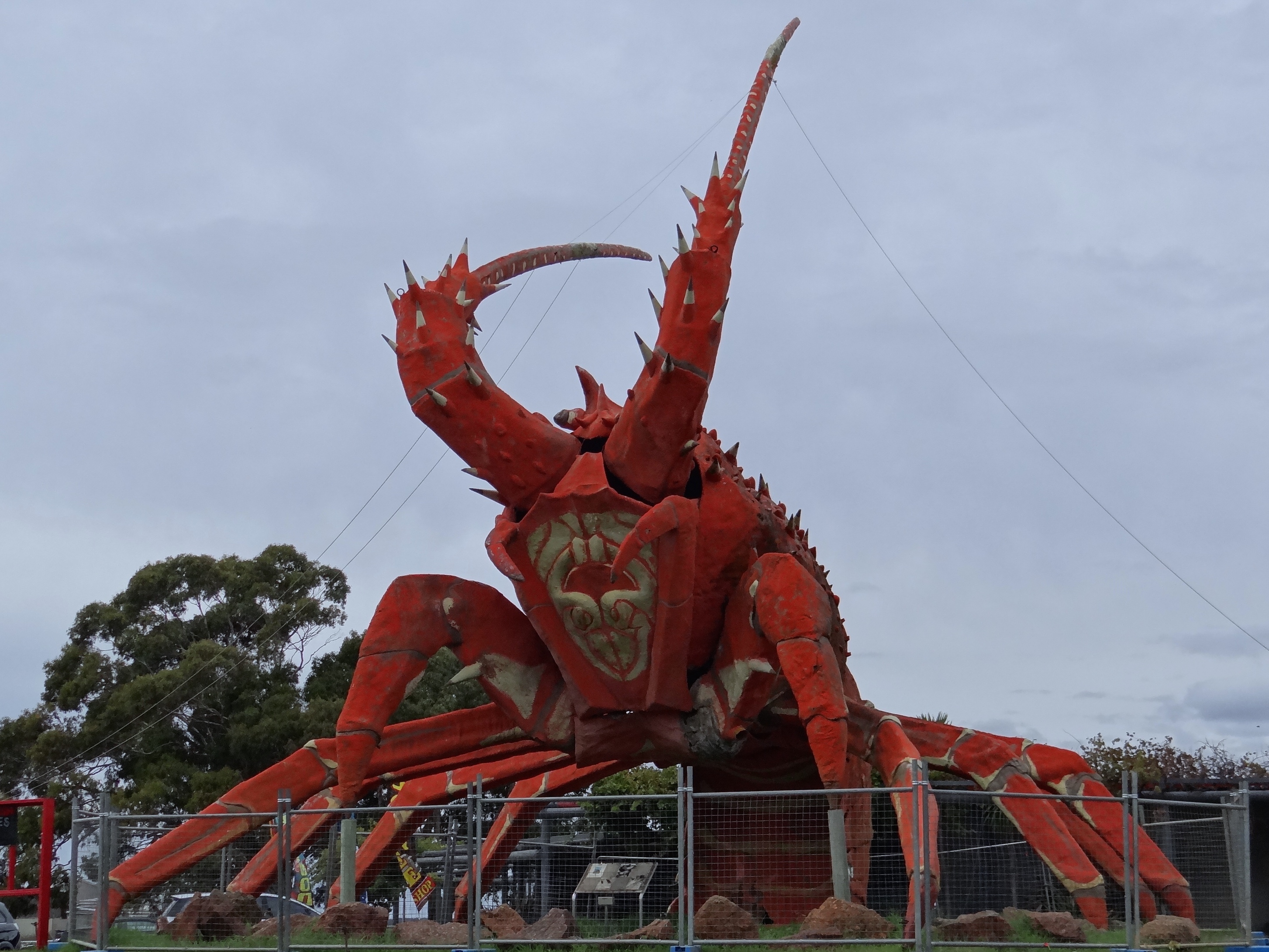 We drove back to Adelaide passing Millicent and Kingston and of course the Big Lobster (which is currently under renovation).

I’d love to also give special thanks to the Lions who along the way had several caravan stops set up for Driver Reviver stops where we enjoyed meeting other travelers, and a refreshing cup of coffee and a cake. 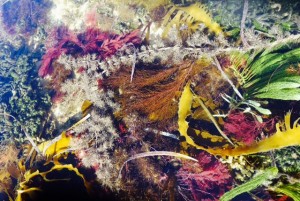 Their volunteer work saves lives, and they are to be commended.

Next week we travel not far from Adelaide.

Stay tuned for where we will be.

We love our life, and all that we get to see, do and explore, and thank everyone who helped make our Easter time such a happy one for us.