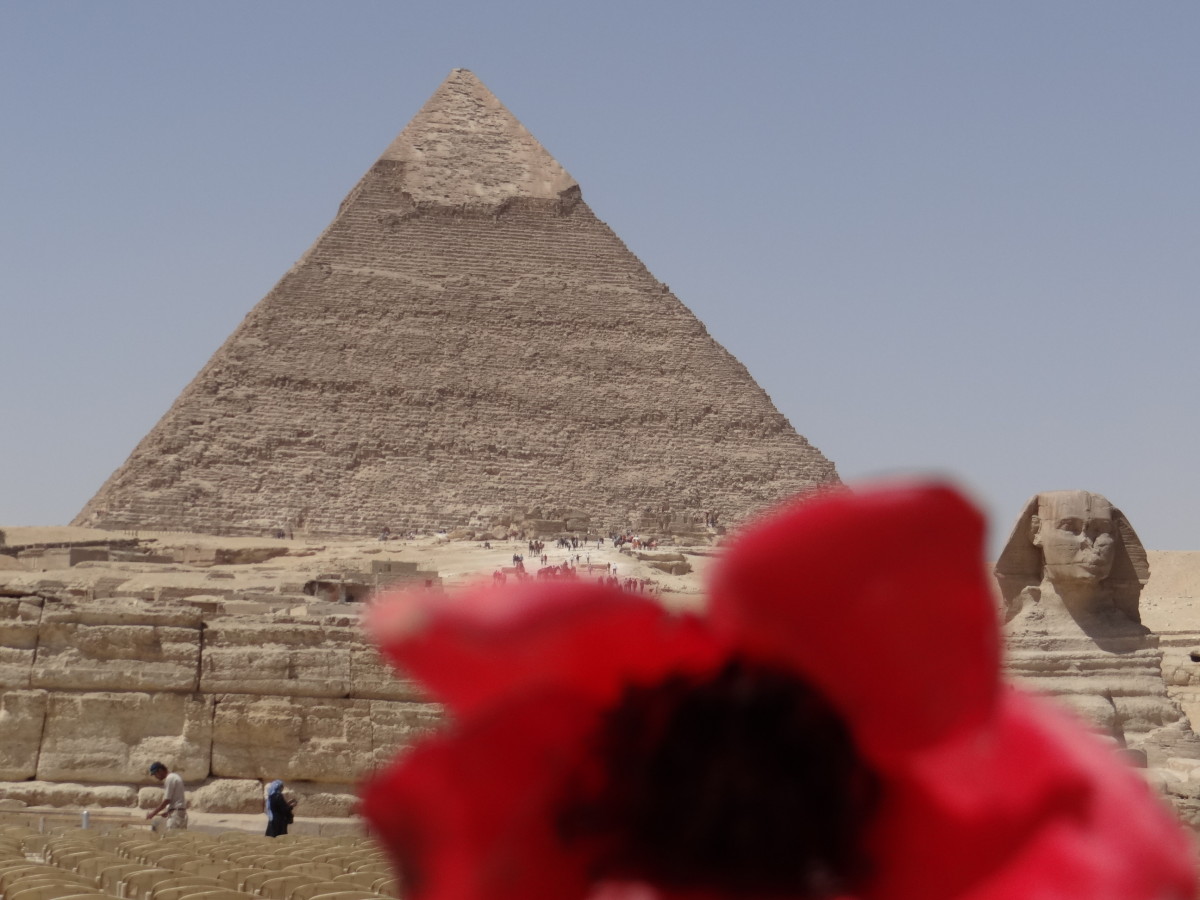 We have not disappeared off the face of the earth for the past week and a half. Rather we have been exploring Egypt with Egypt Uncovered on their Nile Explorer tour and in particular, the southern area near Sudan where the Nubian people of Egypt live.

We traveled to Cairo via Istanbul, and it was a bit of a surprise when Turkish Airlines put us on an earlier flight. I madly jumped on Skype at the airport and contacted the lovely staff of Egypt Uncovered, and they arranged an extra night at the hotel; and a 3:00 a.m. collection at the airport.

But what was even more of a surprise, was when we were walking through the airport, and they’re waiting for us inside the customs area was Tom, their Cairo Manager – all cheery and welcoming. He helped us with purchasing our Egyptian Visas, and then proceeded to guide us straight through the customs area with not so much as a baggage check, whilst I noticed others having the contents of their bags pulled completely apart. I was so impressed, and it was a nice touch to the start of our time here.

We drove through Cairo at 3:30 a.m. as Explorason slept, I was astounded at how safe the city felt.

We arrived and I hit the pillow as the mosque wailed in the distance, and the birds started chirping. With about 3 hours sleep I was so tired, and we stayed our first three (or two and a bit) nights in a really authentic hotel called Zayed Hotel. We loved it there and felt we left as friends, and their motto of “Come as guests and leave as friends” really was true for us. We felt the warmth of their Egyptian hospitality, and I loved the Egyptian traditional breakfast buffet (which was made for more of the local palate and so authentic and rich in flavors) so much.

On the first official day of our tour with Egypt Uncovered, Nile Explorer tour, we were collected early for a day trip to Alexandria at 6:00 a.m., so it was a boxed breakfast from the hotel, and bags packed to go. This tour was an extra option, and I am so glad we went and you can read about it here. It was a way to meet some of the group we would travel within Egypt, and ease us into Egypt and all there was to learn, see and do.

That evening we arrive back to Cairo, to the area of Giza, near the pyramids and check into Hotel Soluxe. This hotel is pretty new, and is quite lovely, but felt strange as it is owned by the Chinese, and so the décor reflects this, as does the breakfast – it was quite unique and unusual, to say the least. We had a large room and the pool area and garden was so pretty. But we opted for an early night, as we were both quite jet-lagged still.

Next day we met our whole tour group, and also our Egyptologist Waleed. I think we were all checking each other out, but I must admit, they looked like a pretty nice group, although I was the oldest, and Explorason the youngest member.

We headed out of the hotel with Explorason jumping with excitement. It was his dream to see the great Pyramids of Giza and the Sphinx, and here we were.

I was amazed at the size of the pyramids, and we chose to pay to go inside the smaller pyramid and walked down the ramp in the cutout tunnel (made so that those that entered had to bow down as they enter). Sadly no cameras are allowed, but I watched people madly clicking photos on their mobile cell phone.

We both stood alone at the end of our time here as others departed – in the middle of the pyramid underneath the earth, and it was an incredible moment for me personally. I was awestruck, and just loved that moment, and will remember it forever. I was standing inside some of the oldest man-made histories in the world – I can’t describe the feeling.

We finished with visiting the Sphinx, and I was so sad to know the British Museum has the nose and beard. It is times like this I see Museums and their quest for visitors as a sad exchange for returning a piece of history to its rightful owner. We have seen this all over the world, and I remember pieces of the Colosseum missing in Rome.

Museums of the world – in my opinion, it is time to do the right thing, and return back to their origin some of the important artifacts to the countries they originated from.

We stopped off after this for some local Egyptian falafel and I was surprised at how much Explorason is now eating new foods – not only without a complaint but also with delight.

Next was the Cairo Museum to see the Tutankhamen exhibit (next to the square where the 2011 Revolution started, so the Egyptian Army has a heavy presence, and tanks greeted us).

It was midway through this museum that Explorason hit the ‘tired button’, so we didn’t get to see the Mummy Room, but he managed to stay awake for the Tutankhamen exhibit, but in hindsight, I would like to go back and spend longer when he is not so tired. They say with all the pieces in this museum you could spend a lifetime if you spent 5 minutes in front of each item there.

Next was a stop for some Koshari, and Lotus and other perfumes. This was a time for many of the group to stock up and the family-run Egyptian business has been around for what seems to be ‘forever’.

That night I was thankful for good wi-fi in the hotel room, as I discovered my website had some major issues to resolve. So I spent ALL of my waking hours on Skype to my amazing website guru in the UK sorting this out.

I woke Explorason I think at 2:00 a.m. to meet the others in our group in the lobby of the hotel, and to drive to the airport for a 3:30 a.m. flight to Aswan in the south.

This was an upgrade option of the tour (from the standard overnight train), and had I not had this option I would have had to cancel the tour with the website problems, so very glad I was able to do this late flight with most the others.

It was also great because the tour guide did all the work at the airport and I didn’t need to think. The luggage was all booked in as a group, and seat tickets issued, so I could sit and relax whilst Explorason went back to sleep.

In the morning we arrived at the beautiful Hotel Helnan in Aswan on the River Nile. Our room had a fabulous balcony and I just stood there in awe hardly believing I was standing as Felucca’s and River Cruises sailed by. It was so beautiful and warm and our room overlooked the pool and river, but I chose to get some sleep for an hour or two.

The internet is not too flash in most of Egypt, so I was glad I managed to get my problems solved in Cairo as the internet was slow in the foyer, and so Explorason woke and went downstairs. There was a nifty under the road tunnel to get to the pool area, and he had a dip in the really cold pool to refresh himself whilst I ordered a pizza.

Then we all gathered for the start of our Nile Explorer tour with Egypt Uncovered in this area. We first drove to the Aswan High Dam which interestingly the Russians helped to construct. This is the area where they had to move the Nubian people in order to build it. A necessary thing for the vital water supply of Egypt, but a hard thing for the Nubians who were relocated from the green banks and lush fields.

We then headed out by motorboat to Philae Temple, which is located on an island. It was lovely to be out on the waters of the River Nile at last too.

This temple actually was moved piece by piece after the High Dam work, as it was being submerged by the rising waters.

Our guide Waleed chose this time to start a roleplay, involving most of the group. Even Explorason was used as ‘Ra’, and so it became a great time of world-schooling for him.  Although he was overtired from the recent speed of travel, he did learn quite a bit.

We found it interesting that the Christians came and chiseled off the faces of the Egyptian gods, and then made an area of worship wherein several places they chiseled a Coptic Cross into the stonework.

Now is a great time to visit as there are so few tourists and you almost get places to yourself.

After a leisurely time here we motored back to where the bus was, and then drove to Aswan and it was time to visit the Souks / Market at sunset.

Again our expert Egyptologist and guide Waleed helped us and told us what to buy that was good in the market area, and what to avoid, and even how much to barter the price for. Pashmina scarves and spices are the main things here that are recommended.

Next up was a lovely boat ride to dinner at a traditional Nubian Restaurant on the River Nile, and they had amazing fresh juices too.  Completely contented, we took a boat back and it was time to hit the pillow for most.

We sat out on our balcony and enjoyed our nice welcome platter of fruit that was in our room thanks to the hotel management and felt the gentle breeze waft towards us from the Nile River.

It was a great time where we both took a moment to be thankful to God for this incredible trip to Egypt.

And to think, this is just the beginning of our time here.