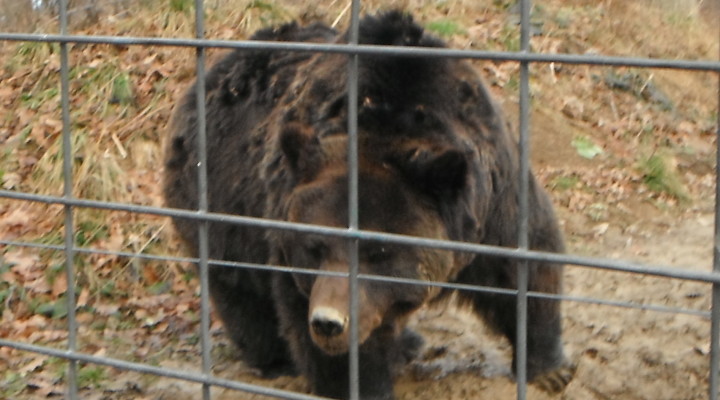 Three full-time traveling families got together and went on a convoy.  Our cars zig-zagged up and down the small country roads of Romania. Past the snowy slopes as children tobogganed.  Finally, we turned off on a long muddy road, and over a rattly wooden bridge. Our cars parked on a grassy hilltop, and we grabbed jackets, gloves, and hats and headed off toward the entrance.

About a half a kilometer walk later we arrived at The Libearty Bear Sanctuary – 70 hectares of hazel trees and oak tree forest here in the Carpathian Mountains above the Transylvanian town of Zarnesti near Brasov.  Thankfully Erin Bender from Travel with Bender had pre-booked our visit. They were sharing a home for Christmas in this area with the King Family, who also came along.

On arrival at the office, we paid a small admission fee, and a movie was already playing, and other visitors sat and watched.   I confess – I missed the video, with a dash to the bathroom, but once outside, I soon picked up most of what I needed to know from our guide, who had great English. 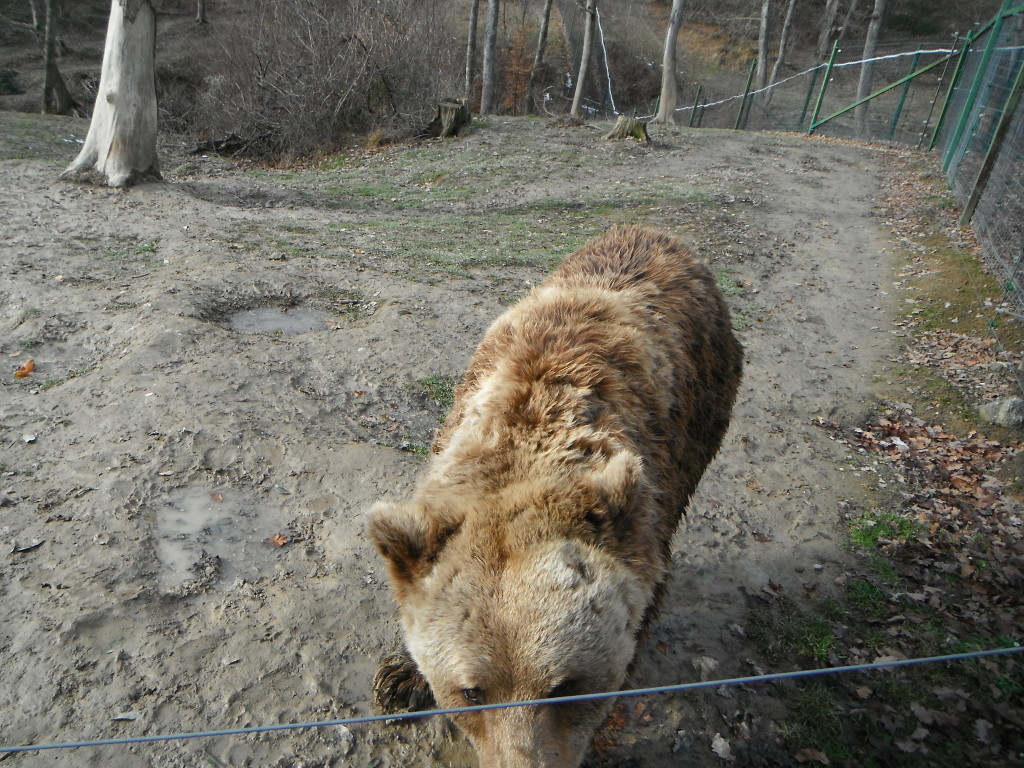 Exploramum and Explorason – We visit the Libearty Bear Sanctuary

So here is a little history we learned – In 1998 a Romanian woman named Cristina Lapis saw three bears in a small cage outside a restaurant in central Romania – a place where they were used to attract customers. She later discovered several more bears used in a similar way in other areas of the country. From that first day, her dream was to rescue these distressed brown bears.  It was her vision to change the public’s attitude, and to stop this horrendous cruelty, and the illegal exploitation of one of Romania’s magnificent native animals – the brown bear. 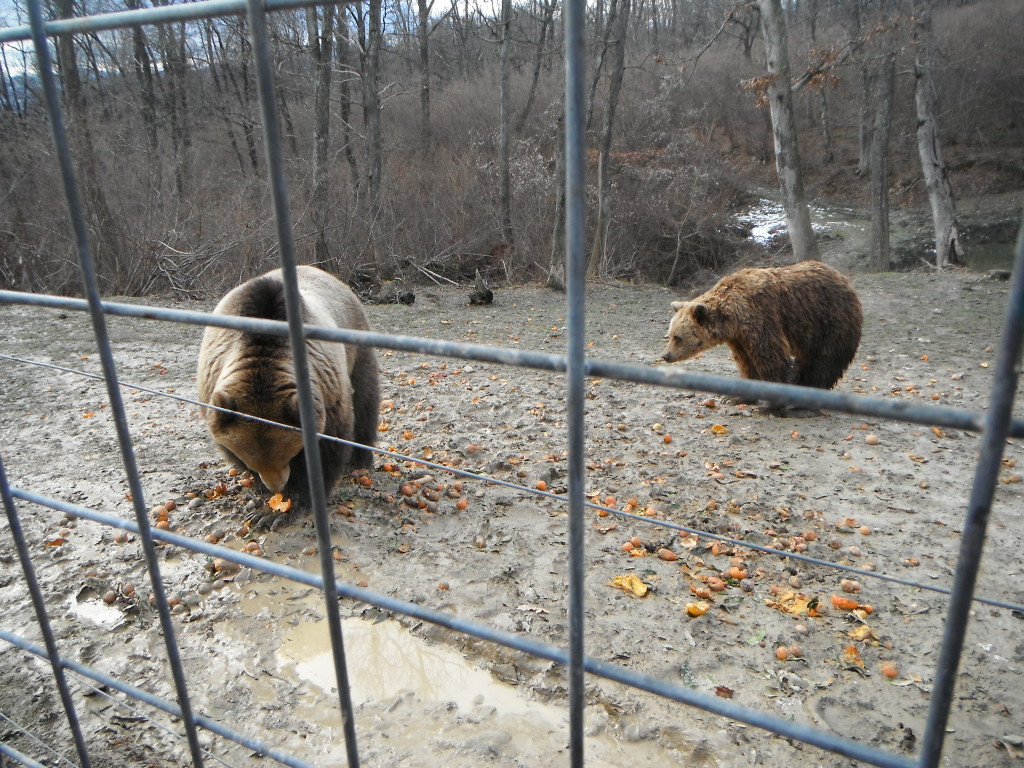 Here at this sanctuary, the bears are no longer in tiny cages. There are approximately 70 bears, and they are in large and safe areas where they can exercise and be free to move about. 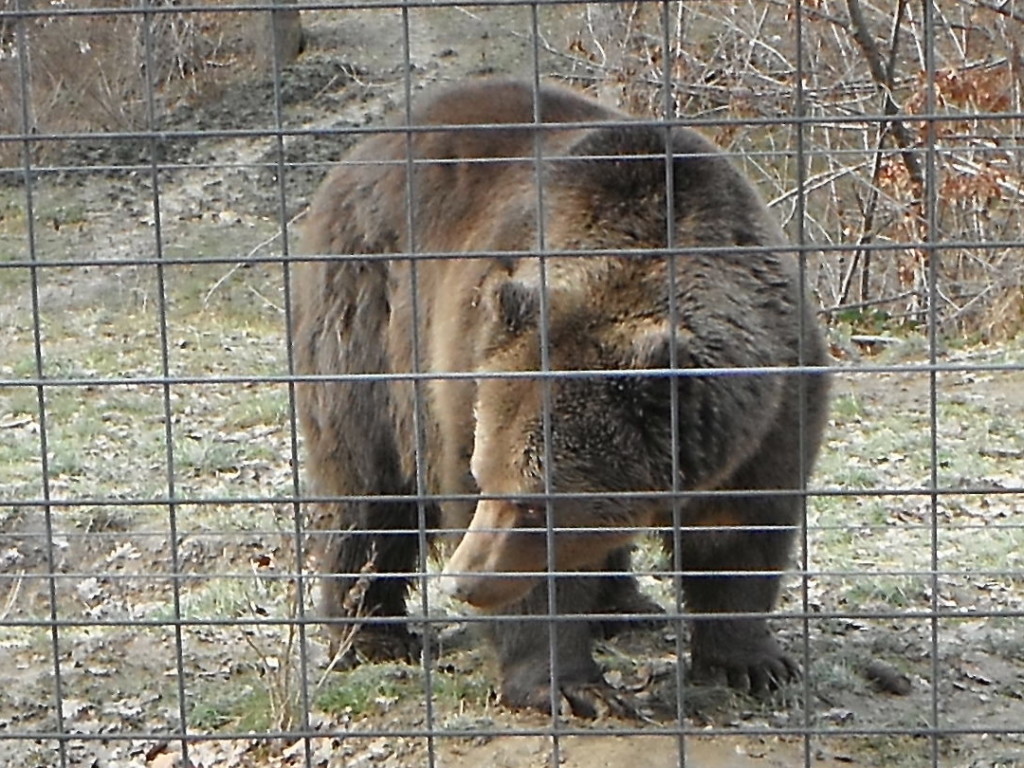 Exploramum and Explorason – Libearty Bear Sanctuary – not so cuddly bears

The bears can walk, and climb trees, and in summer they swim in the pools and forage through the vegetation. For some of these bears who were caught in the wild as cubs and then treated cruelly, this is a new and scary, or exciting experience.

There is an electric fence, and that is here to protect us.

Explorason took a lot of these photographs, from the safety of the fenced area. 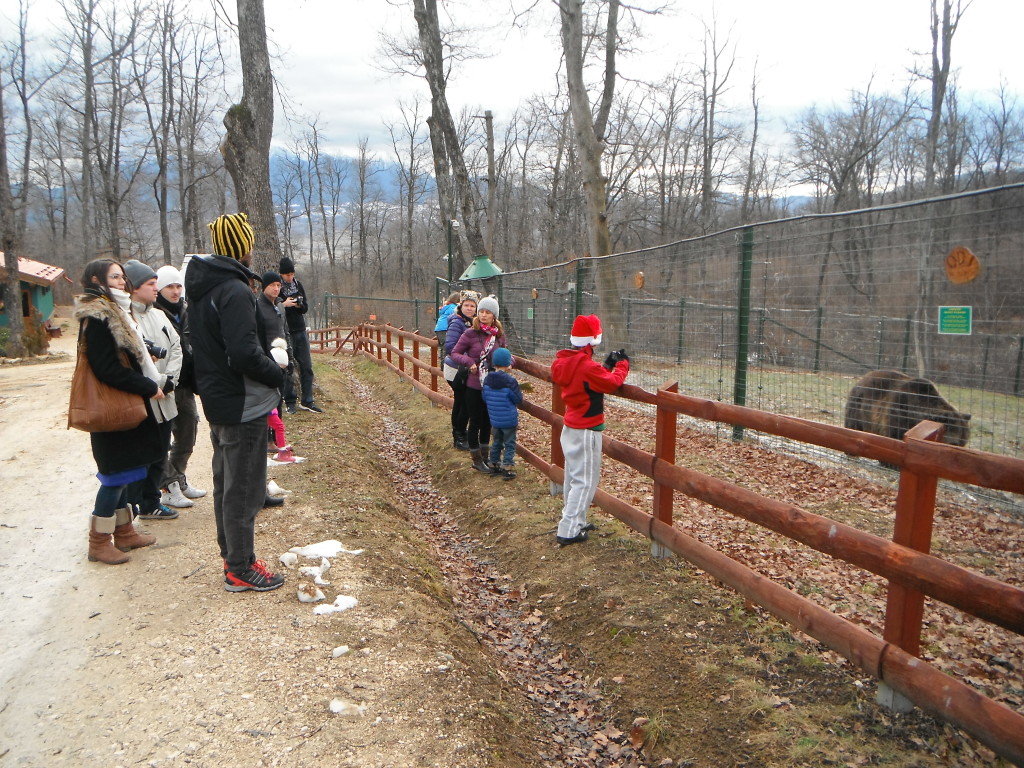 WSPA is the new name of what was RSPCA. 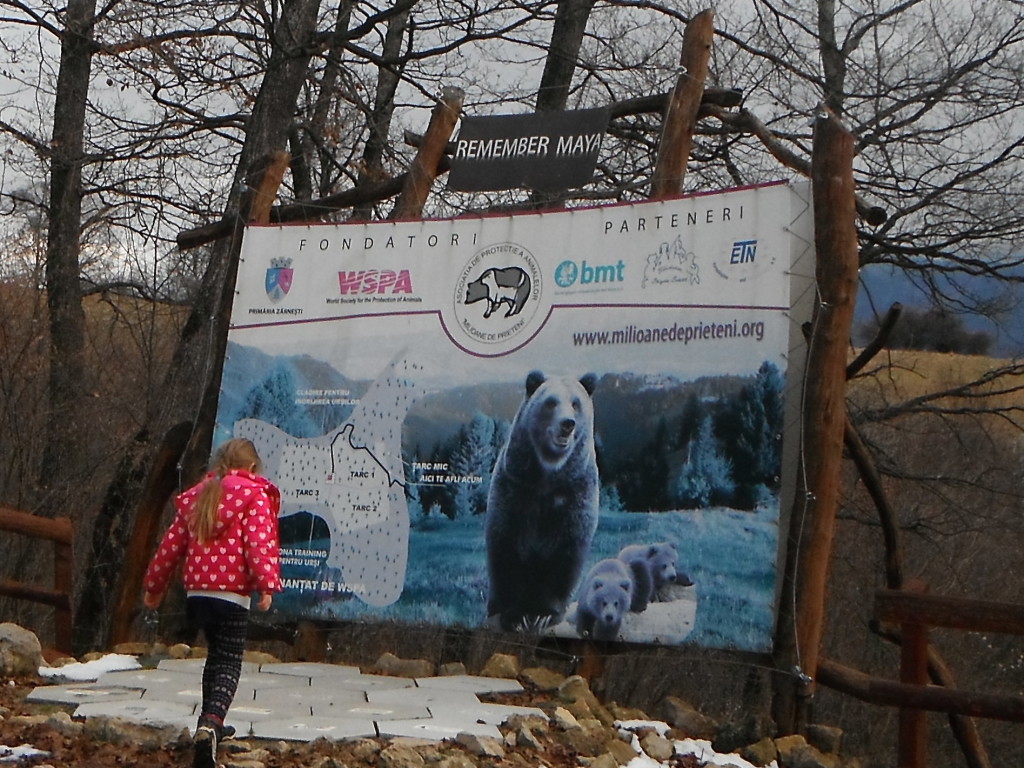 We learned they had even rescued a fox. She used to have a companion, but the companion died, so now is alone. 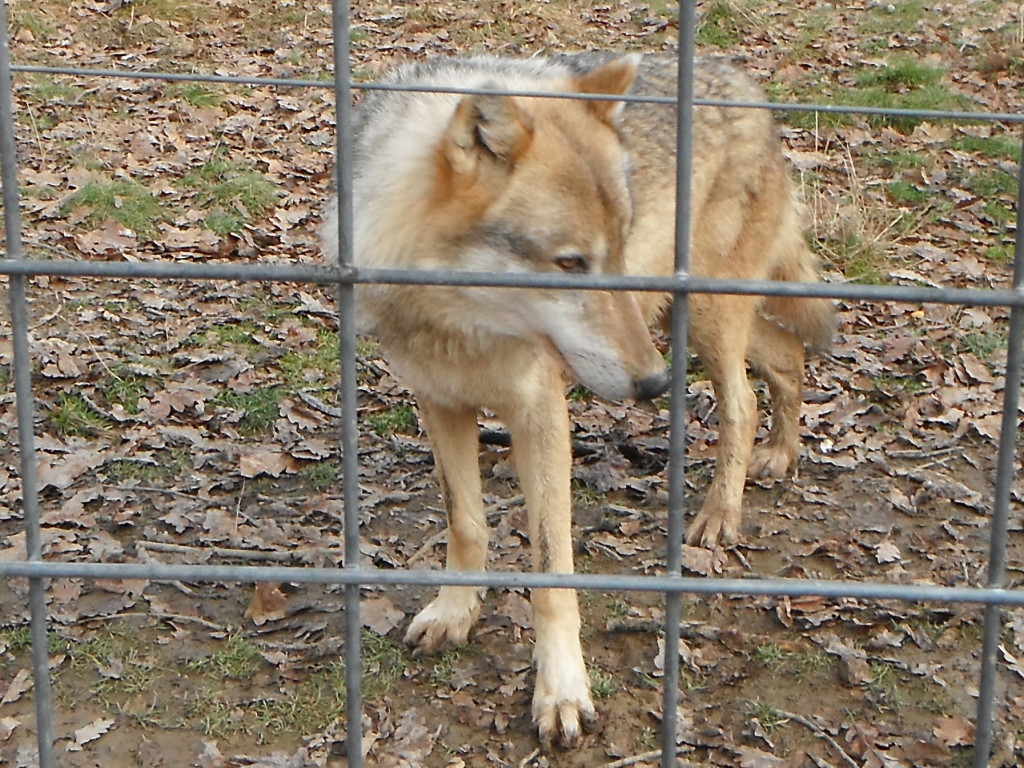 But this big brown bear stole Explorason’s and my heart. In fact, that night when we got back to our apartment he prayed for him. 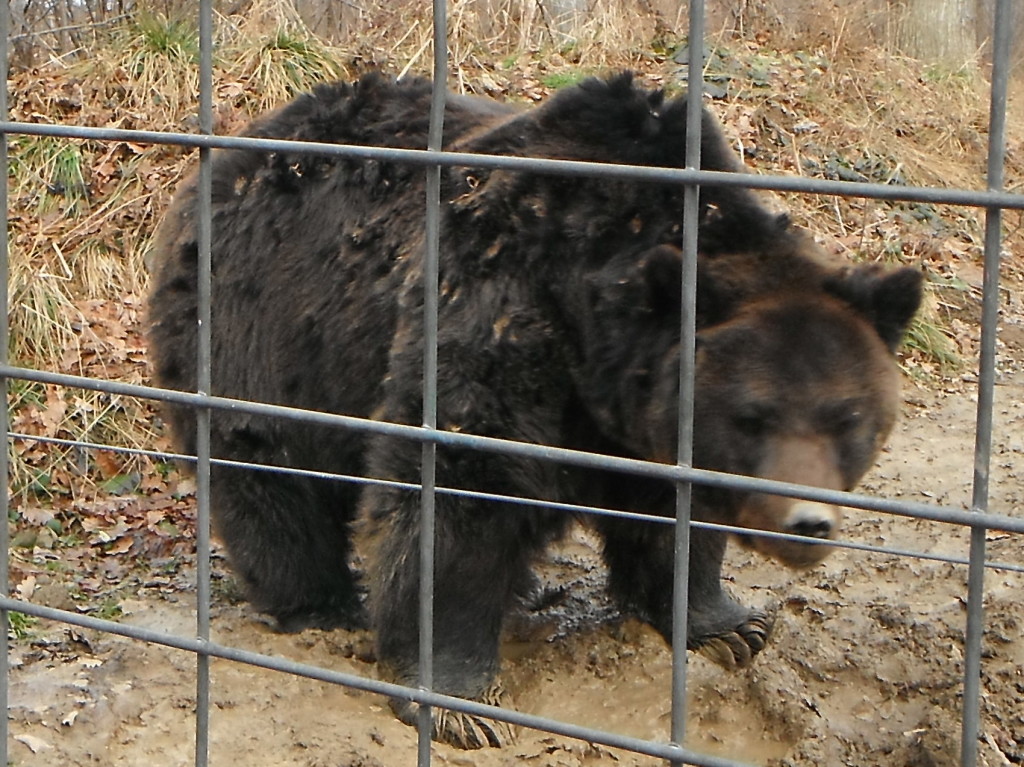 He was used at one of the Romanian castles for photographs with tourists.  His cruel owner destroyed his eyesight and he is now blind. He chained him up so tightly his legs are deformed and bent, and he never grew to his full height.  He was tortured and treated so badly he now gets panic attacks. 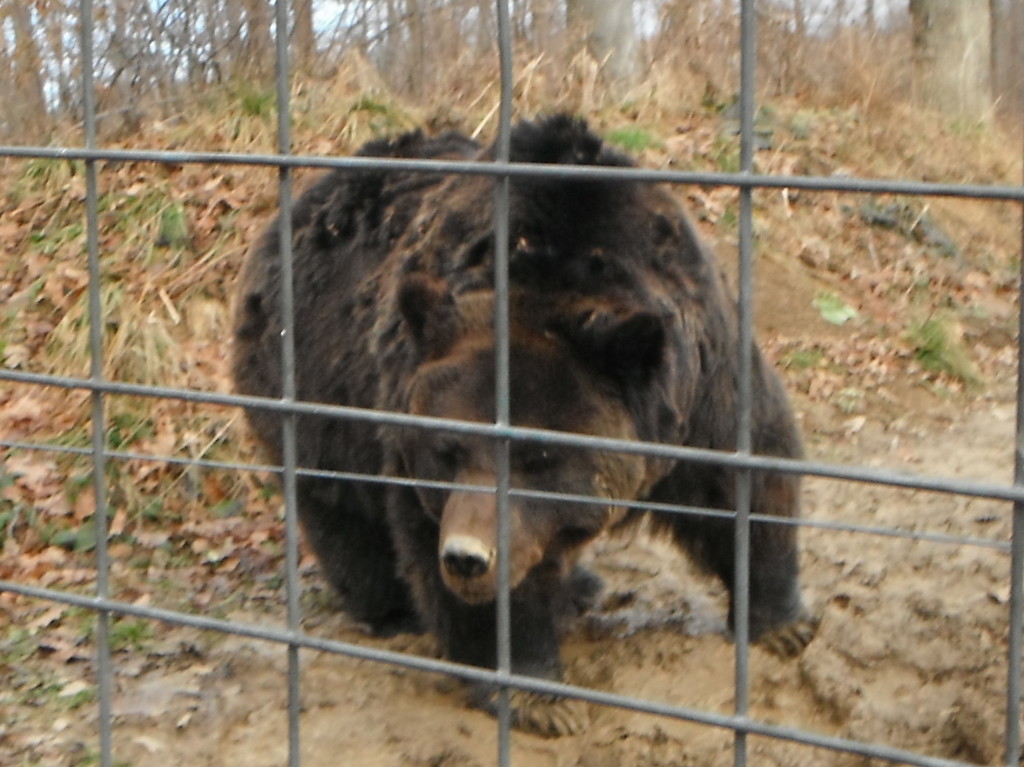 He would pace with his front paws – Back and forth; back and forth. We watched him sadly do this for maybe ten minutes, and it broke my heart. 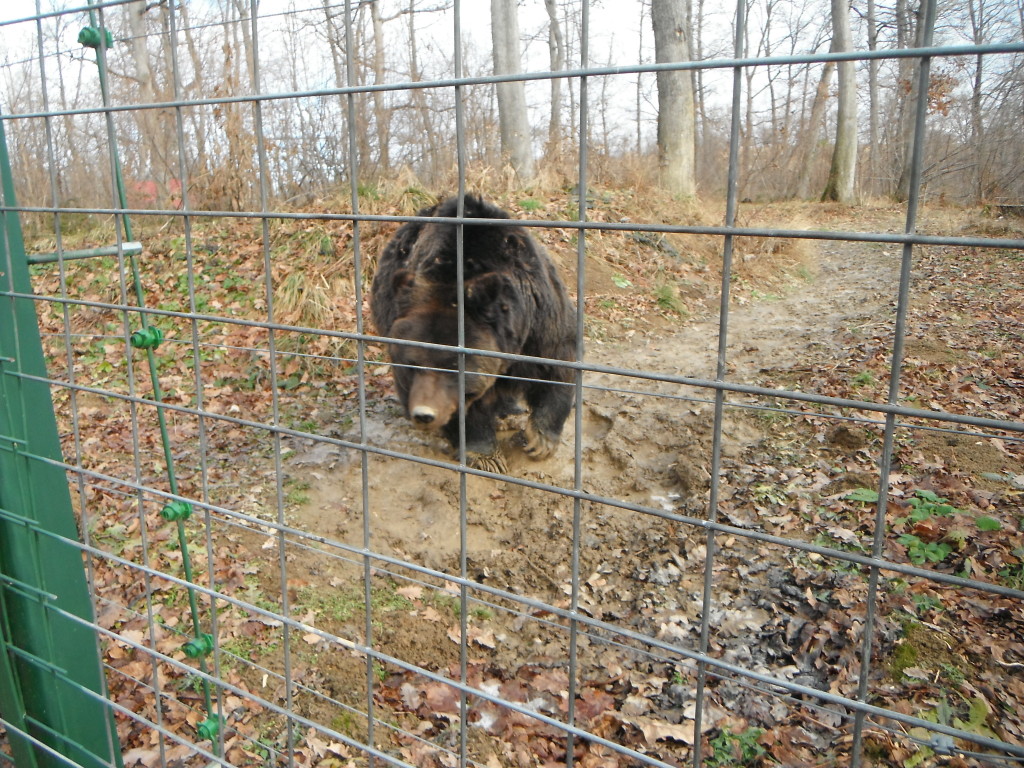 He was anxious that it was near feeding time, and he can’t see his food.  He was much happier when the staff came and threw it in.  I hope that whoever did this to him has been dealt with by the legal system now that animal cruelty issues are also being addressed by the Romanian Government. 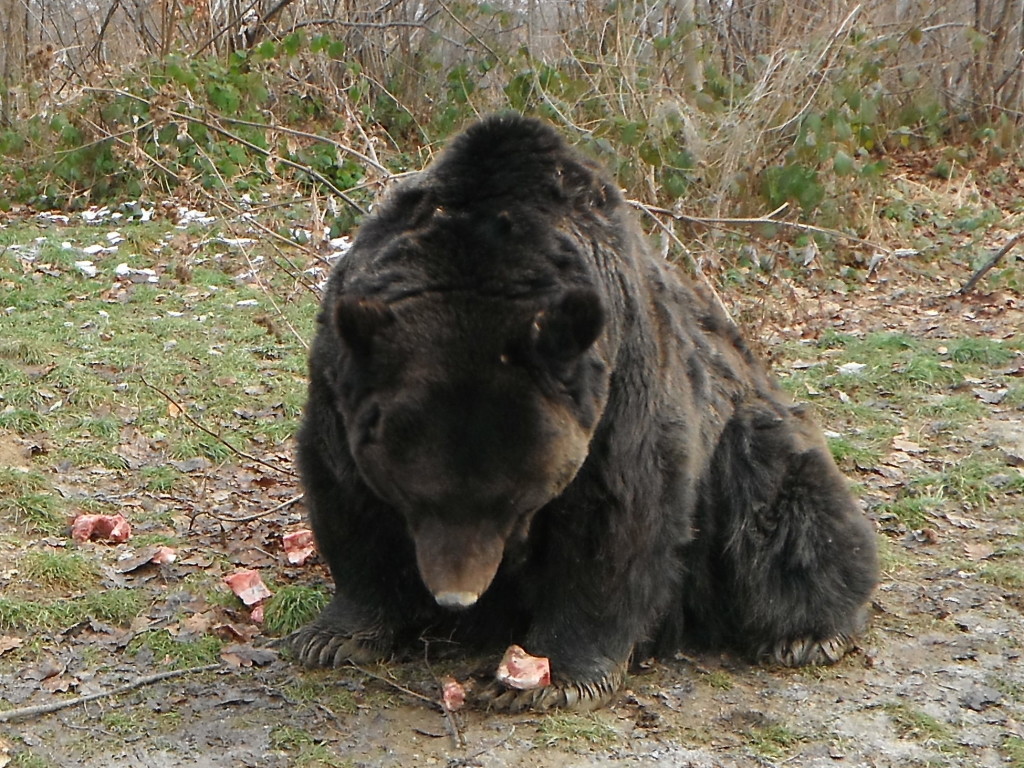 We left there and then proceeded to watch a lazy Tibetan bear get fed. He was asleep in the pipe at the back.  He never moved, even when his lunch was delivered right to him. 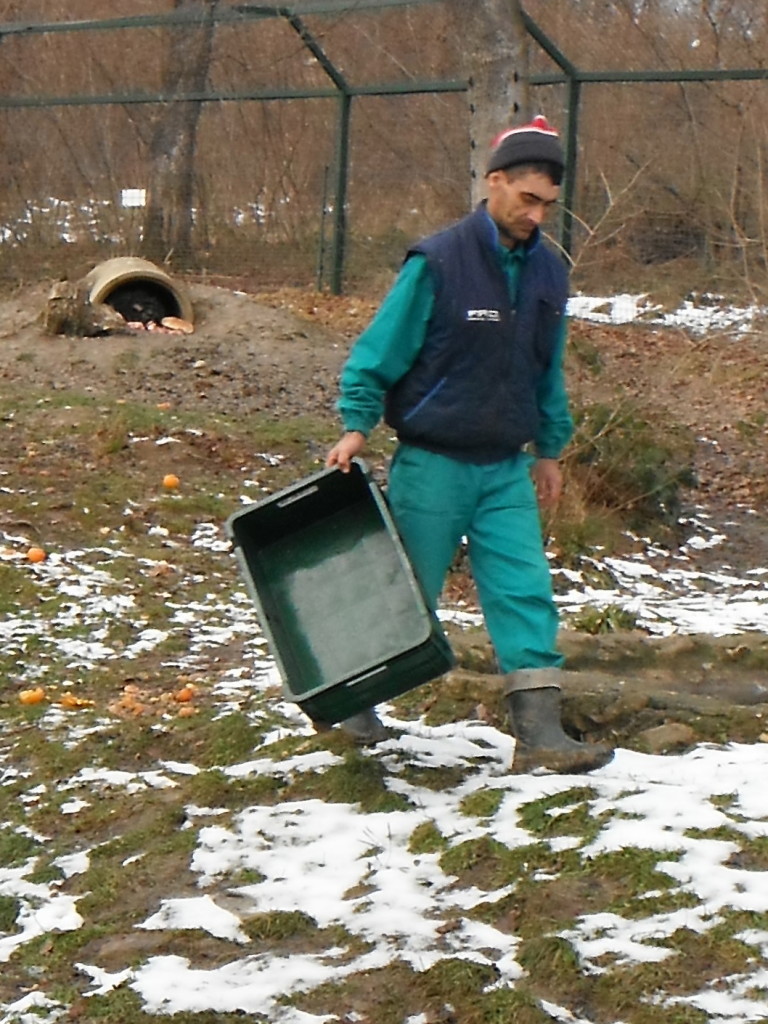 Some of these bears are so frightened.  This bear will stay up this tree for weeks or months. He is scared to come down. He doesn’t know the area and is fairly new. So he lives near the hospital area for now.

Although the bears feed on the vegetation, nuts, and berries available in the forest they do need additional food and the sanctuary staff distributes over a tonne of fruit and vegetables a day around the sanctuary enclosures. 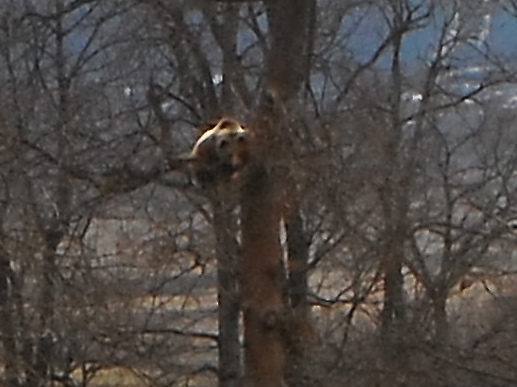 These bears had a great time scratching themselves.  They were able to live together, but many of the bears can’t, simply because they are not used to other bears in the wild.  They have been caged or enclosed alone for so long.

This is not a zoo. The safety and welfare of the bears is their top priority, but we saw some of the bears playing and resting near to the fences, or in the distance.  Most visitors are generally are able to experience these magnificent animals from a safe distance. 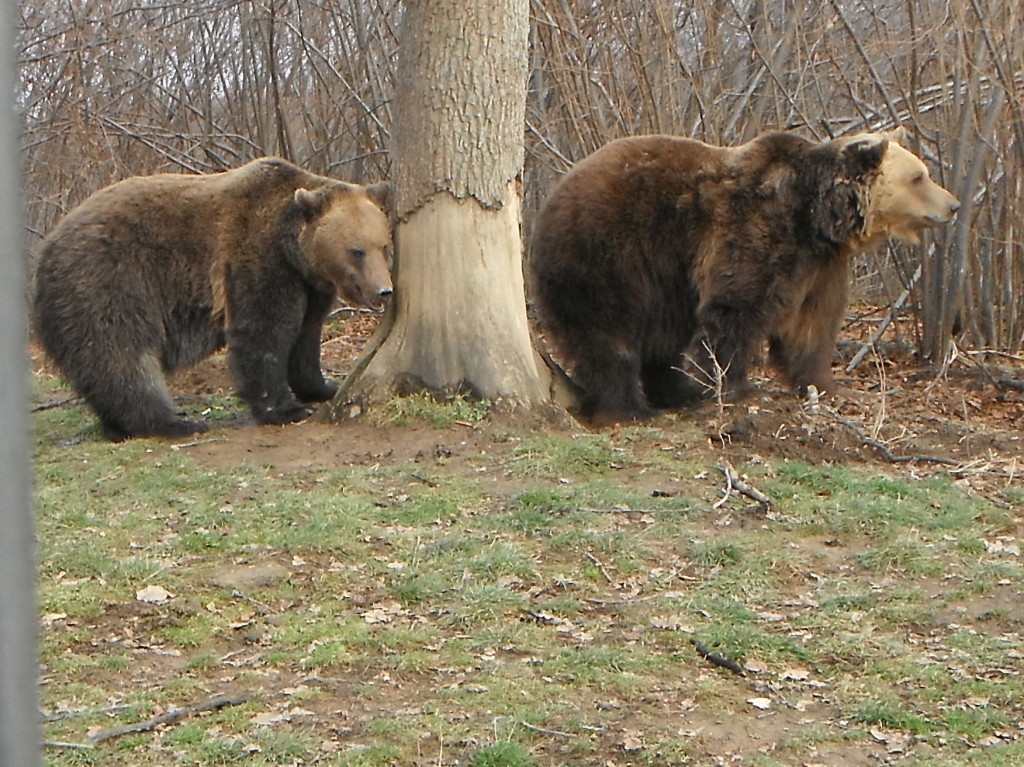 The sanctuary was created because originally there was a need to rescue over 50 bears found suffering in small and rusted cages around Romania. They had been used as pets, or attractions for restaurants, and even petrol stations.

The bears had all caught from the wild forest areas of Romania as cubs and had lived all their lives in confined cages or even pits, with a poor diet, terrible conditions, and some head no lighting, and little or no veterinary care.

This practice of keeping captive bears was illegal in Romania, but until the Libearty Bear Sanctuary was created, the authorities were unable to confiscate these bears, mainly due to the lack of any facility being available to care for them.

So it is wonderful that we could see them roaming free, and so well cared for now. 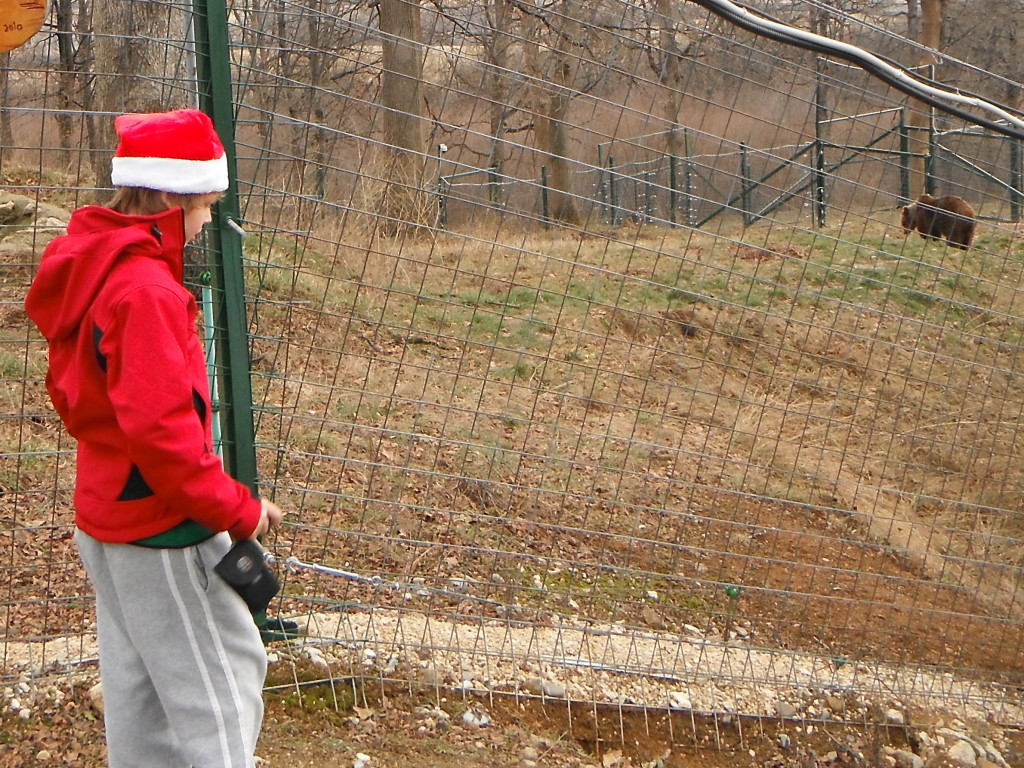 Romania joined the European Union in 2007, and this included new laws from the EU Zoo Directive.  It meant all the zoos in Romania required a certain standard of animal management.  Copious amounts of both small and large zoos could not comply, forcing the bears in these zoos to face acts of euthanasia.  Thankfully they were saved by being re-homed here in the Libearty Bear Sanctuary.

I leave here with the feeling that I want the world to know what a great place this is.  If you come to Romania, please add this to your list of places to visit. Your visit shows support and can help them financially too.

We finish our time here with a lunch picnic on the hills. 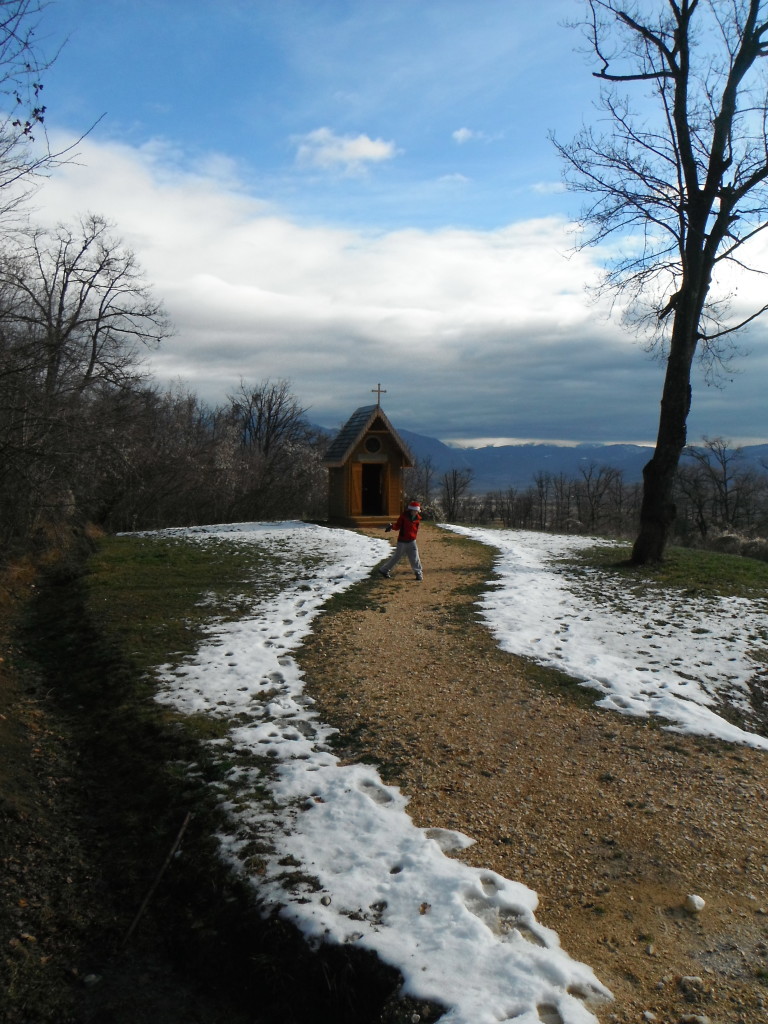 After we enjoyed just the best tuna sandwiches ever (thanks to Sabina King), the children play tag and run free across the hilltop.

It has been a beautiful time today of world education.

Thank you for being part of our journey as we explore the world, and learn as we go.  This is our 43rd country, and we have no desire to stop.

There is so much to see, and so much to explore, so as we say goodbye to 2014 we thank you for being a part of our journey.  We look forward to the great places ahead in 2015 – and we know we have some exciting things to share with you too. 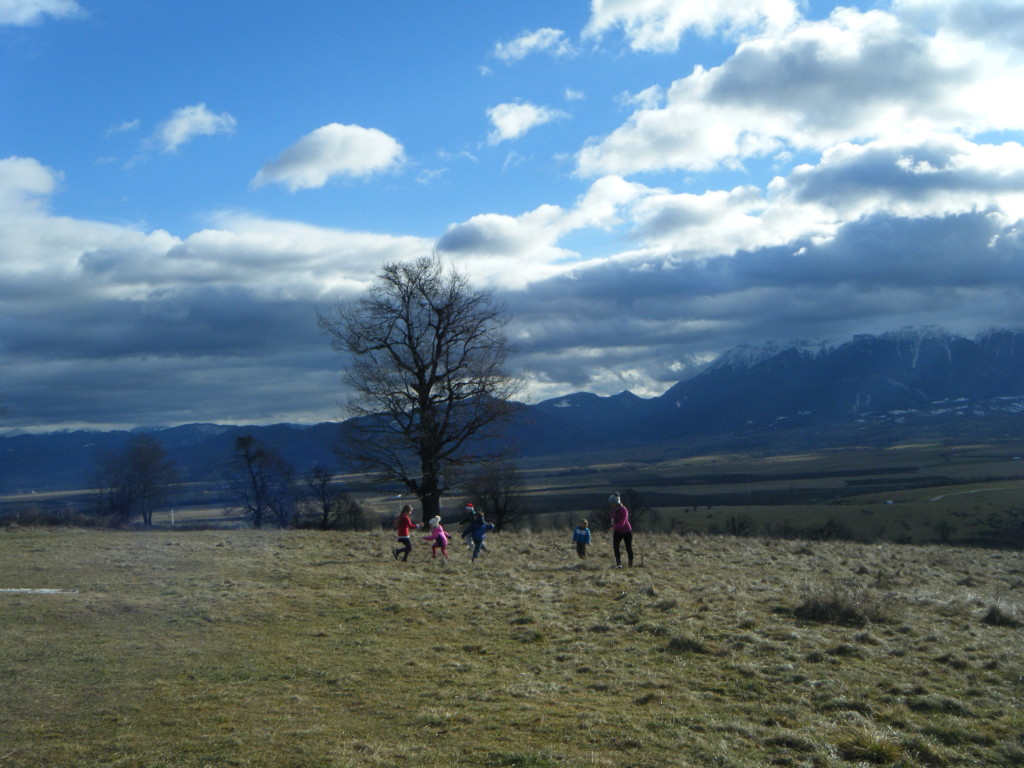 You can help by making a donation directly to the Romanian bear sanctuary at http://www.ampbears.ro/

or to the World Society for the Protection of Animals (WSPA) who are supporting the rescue and care of bears at the Romanian sanctuary.  http://www.wspa.org.uk

Bookings and Enquiries: Book a hotel in Brasov here