We have just had the most memorable time in Cuba.

Due to virtually no wi-fi, we were unable to load blogs, but this gave me a good break.  A time to just get out and enjoy each day, without checking Facebook, emails, and blogging.

We reached Trinidad rather late at night, and after checking out two Casa Particulars we did not like, and one that no one answered the door at, we finally spied one that looked nice, near the center of the historical section of town, set on a cobblestone street.  We were meant to go to the casa a few doors down, or at least we had reserved a room for the following night, but as soon as I laid eyes on the rather slothful owner, sitting with no bra and no teeth, I hastily retreated to the previous one.  This was not without the neighbor having to pay her for us not staying there, which I found quite unfair.

When we arrived, we had no idea there was a birthday party in full swing.  The owner poured me a rather large Havana Club rum, my son was given a national lemon (lemonade soda in a can) and in next to no time we were feeling like friends, not guests.  Turns out the lady is a single Mum, and has her boyfriend staying, and the kids are her students – she teaches roller-blading and roller-skating, of which several kids were crashing through the small casa on.  Meanwhile, the kids were teaching my son dominoes, and her boyfriend was cooking a meal for us.

It was a great start to our time in Trinidad.  The next day we were due to explore.  This was after we had settled into our humble iron fame beds and tiny room upstairs quite nicely the night before, though the air-conditioner was too noisy to use, and the hot water didn’t heat, but it was so humid, I gladly jumped in and out of the cold water to de-frizz my hair, and cool off.

Our hostess offered to show us around the town.

First was the museum, where we learned how the African slave ladies would make the terracotta tiles, by molding the clay around their upper legs.  We saw the first shower, and how the toilets had adjoining doors so the husbands and maids could assist the ladies with their clothing. 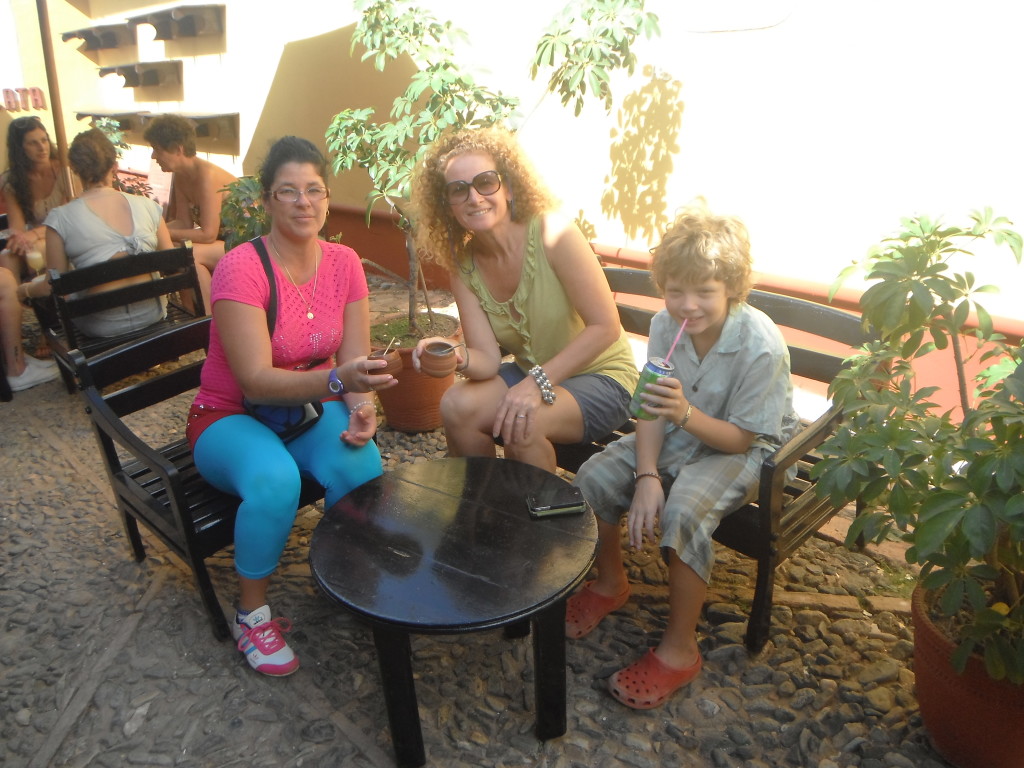 We then visited Canchanchara a traditional drink and had a great time listening to the music.

The cobblestone streets seemed to merge and twist past parks and squares, and it was a really pretty town. 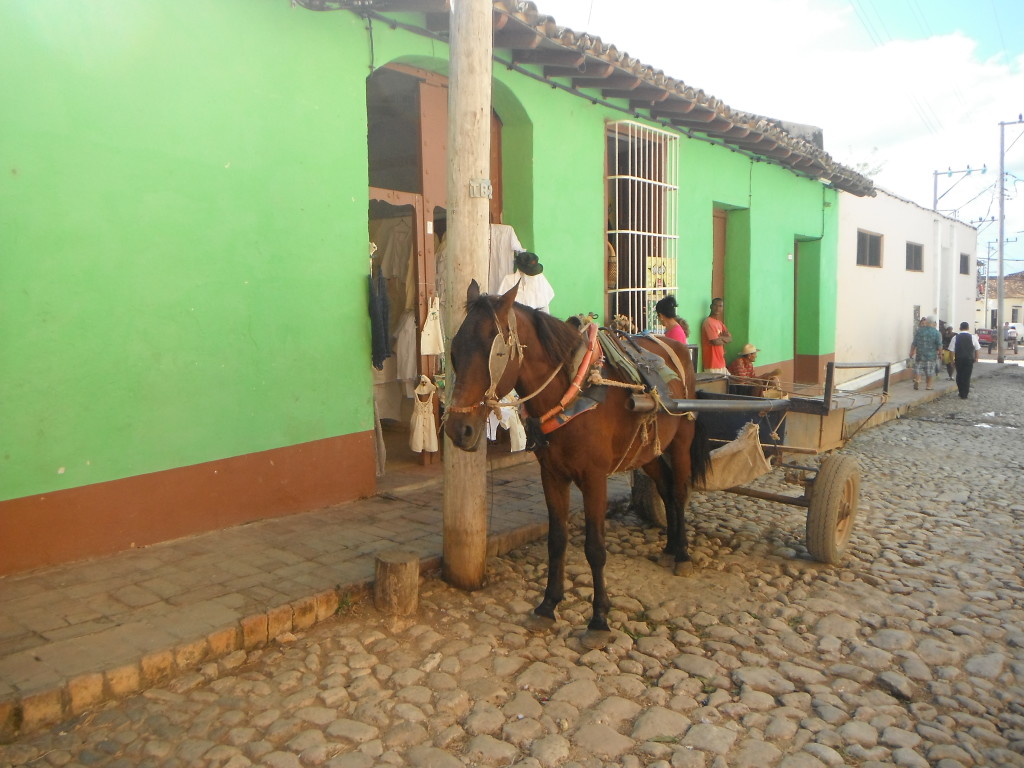 We visited another museum and learned a little about the revolution and previous battles. The steep staircases were a challenge. 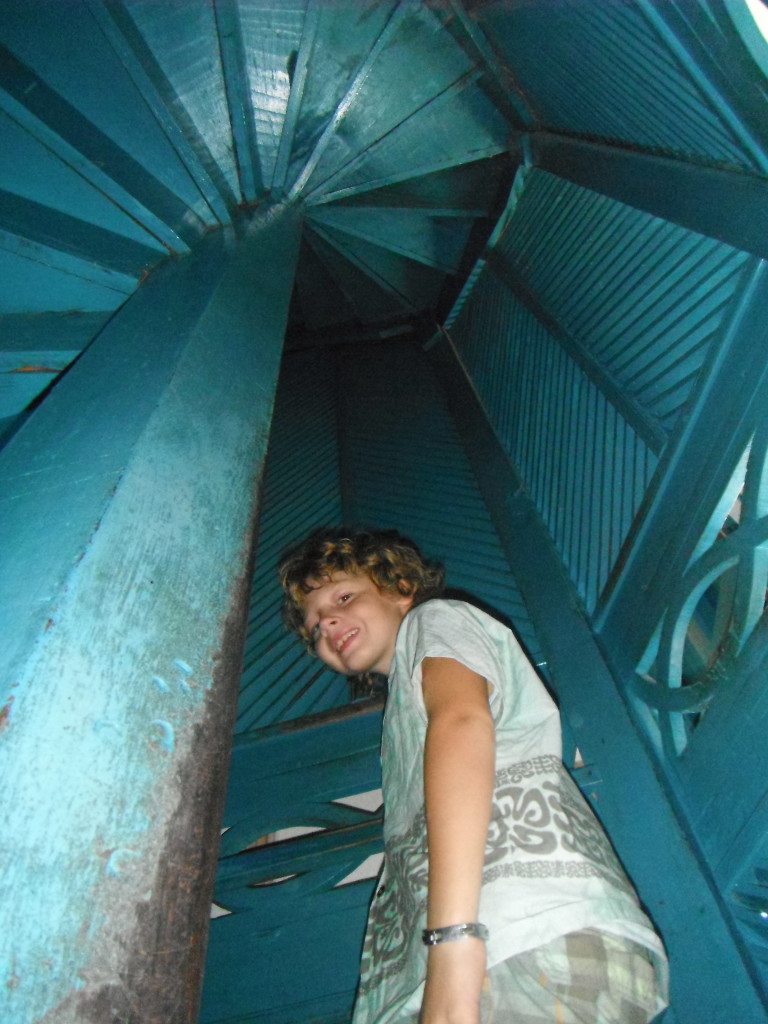 But the view was worth it. 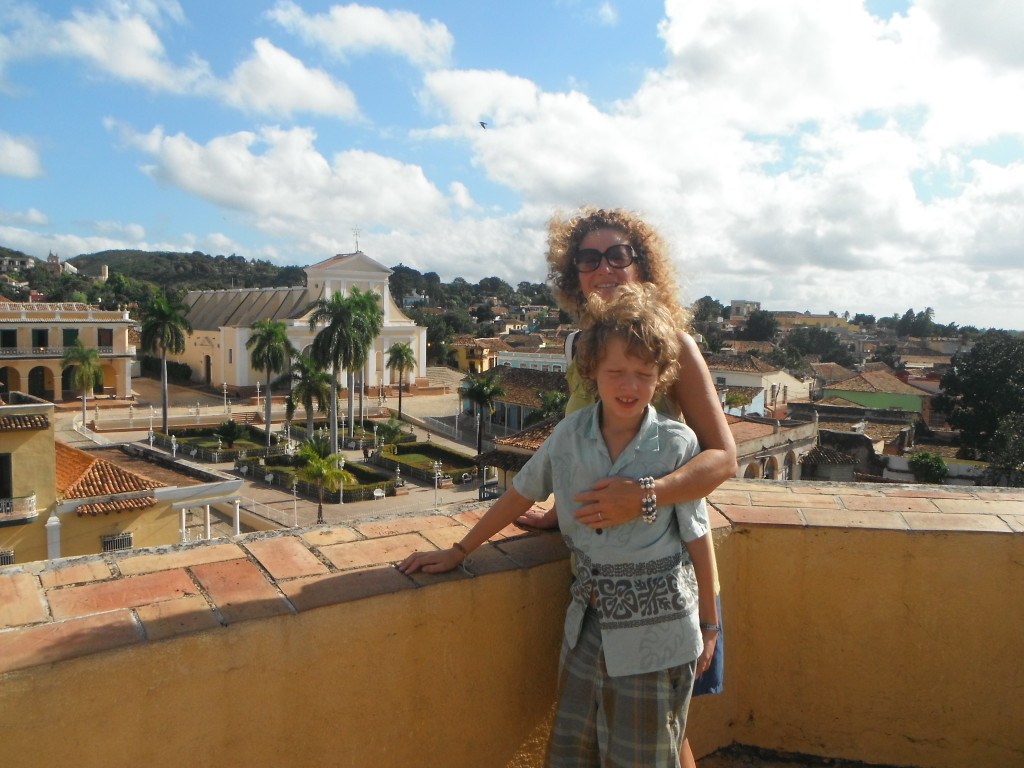 We had fun in the bell tower and there were several arch areas and different bells at various levels. 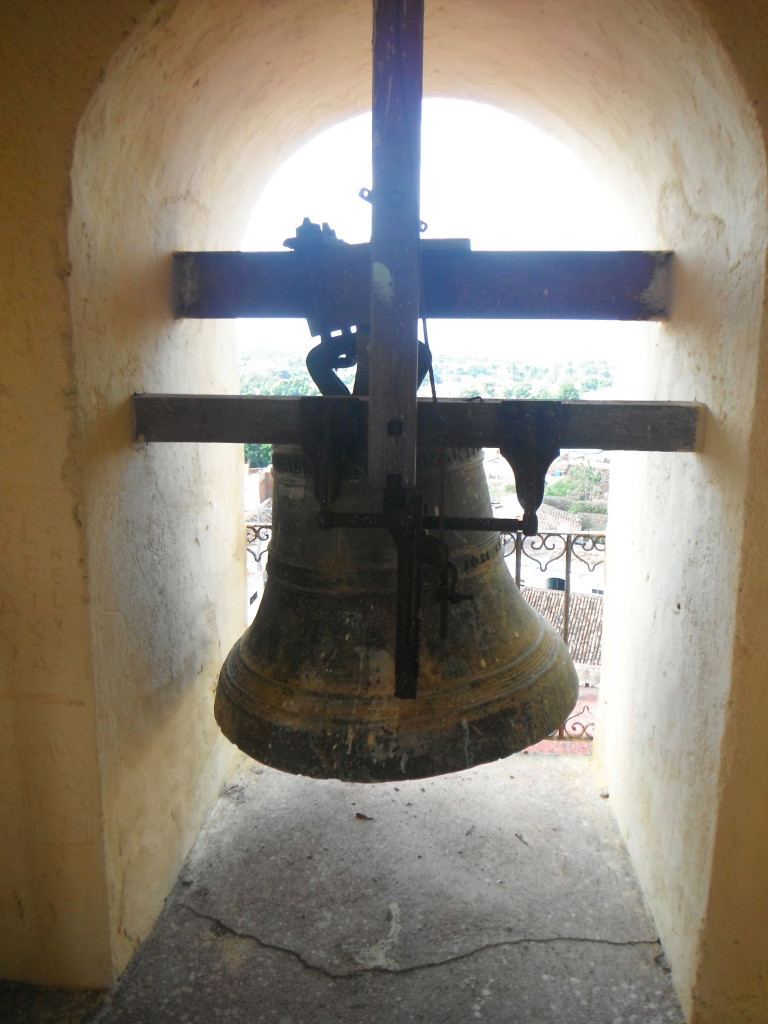 My history of Cuba until now was sketchy, but I was learning quite a bit, and so was Explorason. 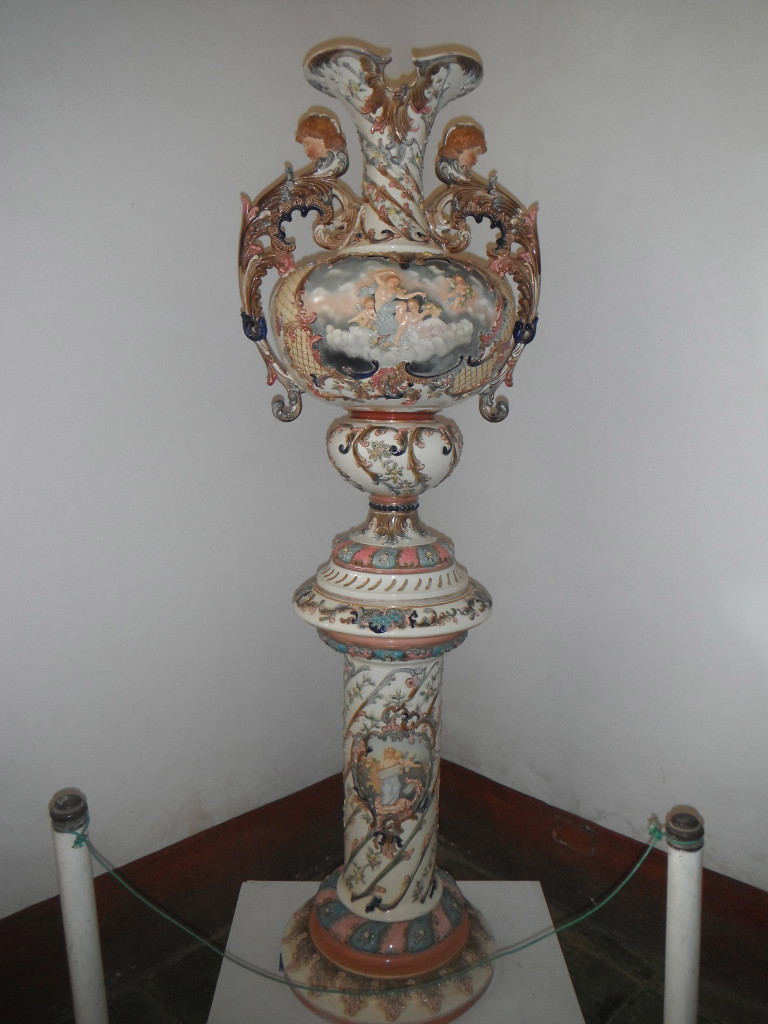 People often ask about his education, but on days like this, education is outsourced to a guide, and I know he learns far more than from a computer or textbook.  Here we learned about the slaves and their ship ride over from Africa.  He loved the diagram of how they were all shackled on the ship.

It was lovely for our hostess to be able to practice her English, and she would try to teach me new Spanish words, and we had a few good laughs – she was lovely!

Trinidad also has a great market that goes up a hill and around a corner, and should not be confused with a smaller one street market. 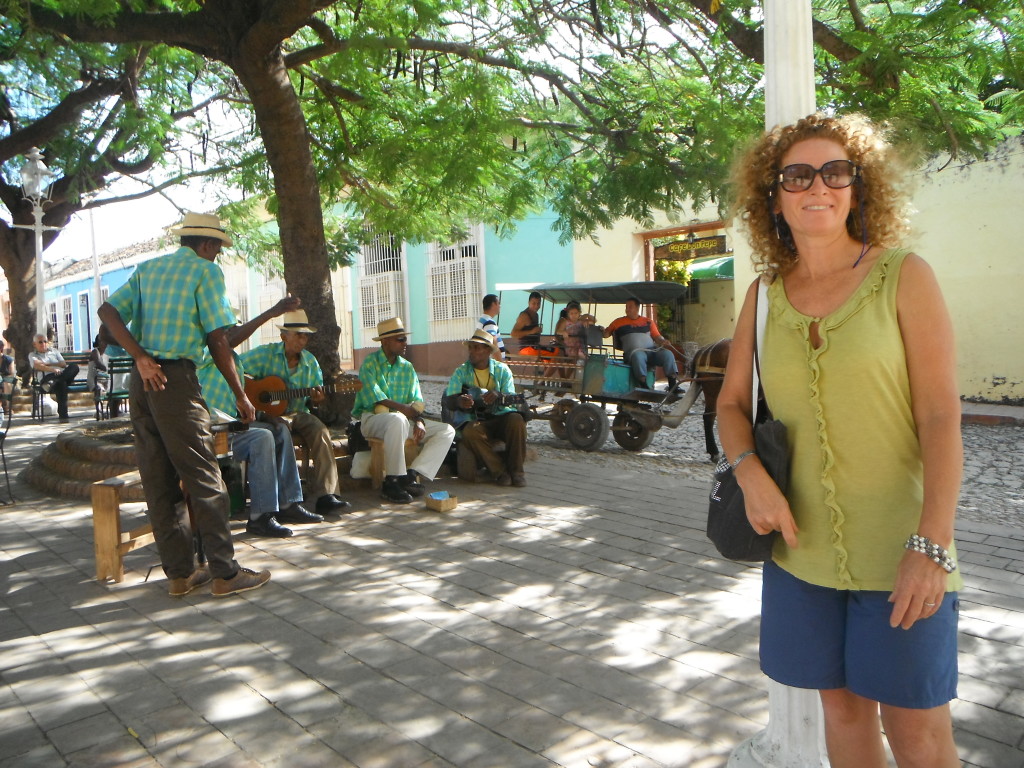 Here my son bought a couple of gifts for me that he would stash away for my birthday.

One day we also went to Playa Ancon.  The owners of our Casa Particular arranged us a taxi for $6 each way, and we arranged to stay for 2 hours, and then he would collect us.  This area is really just full of All-inclusive resorts, and they are pretty well policed, so unless you have an armband, you are deemed to hit the sand or pay for a sun-bed under a thatched umbrella.

The water is crystal clear, and quite warm, and drops off steeply after the first couple of meters of white sand.

Sellers come along with pizza for $2.  Seeing you can buy this in town for between the equivalent of 20 cents – 50 cents, they are on a good deal, and we watched him sell 50 in about 5 minutes, with him delivering them on a tray to those catching the rays on their sun-beds.

We had a good time playing in the sand and the waves, and after 2 hours had just had enough sun, and headed back in the taxi.

Worth a visit, but not sure I would want to stay there – I think Trinidad is far nicer.  It has great little shops and markets, quite a few nice restaurants, and a fantastic range of musical venues – one of my favorite places in Cuba so far. 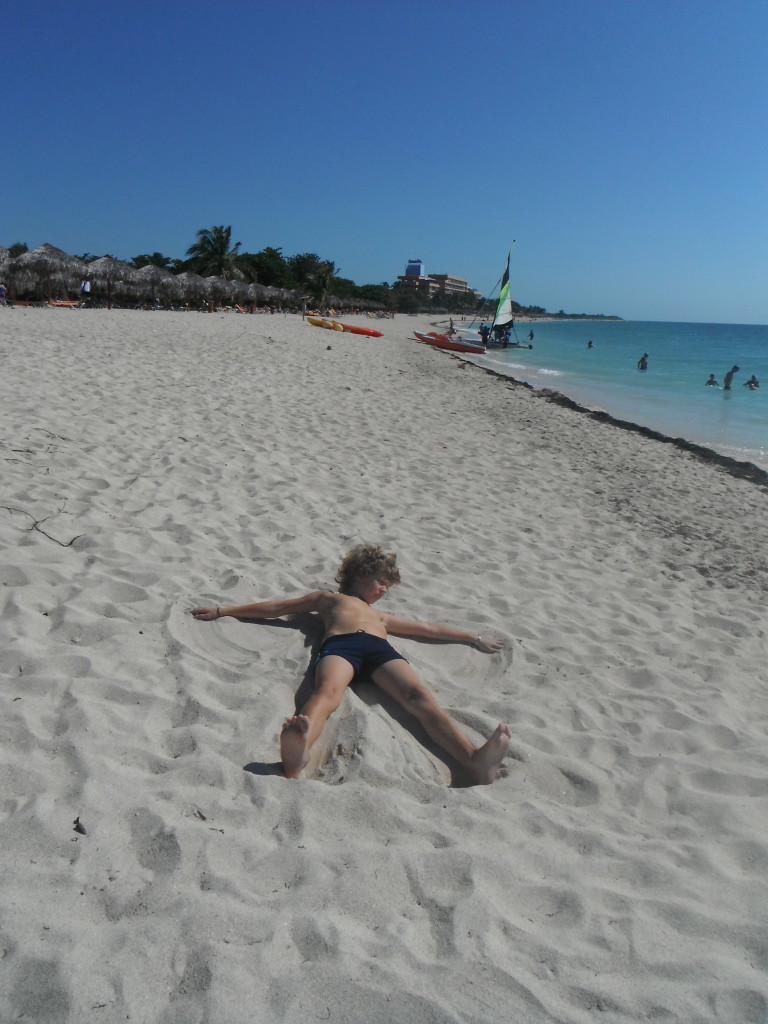