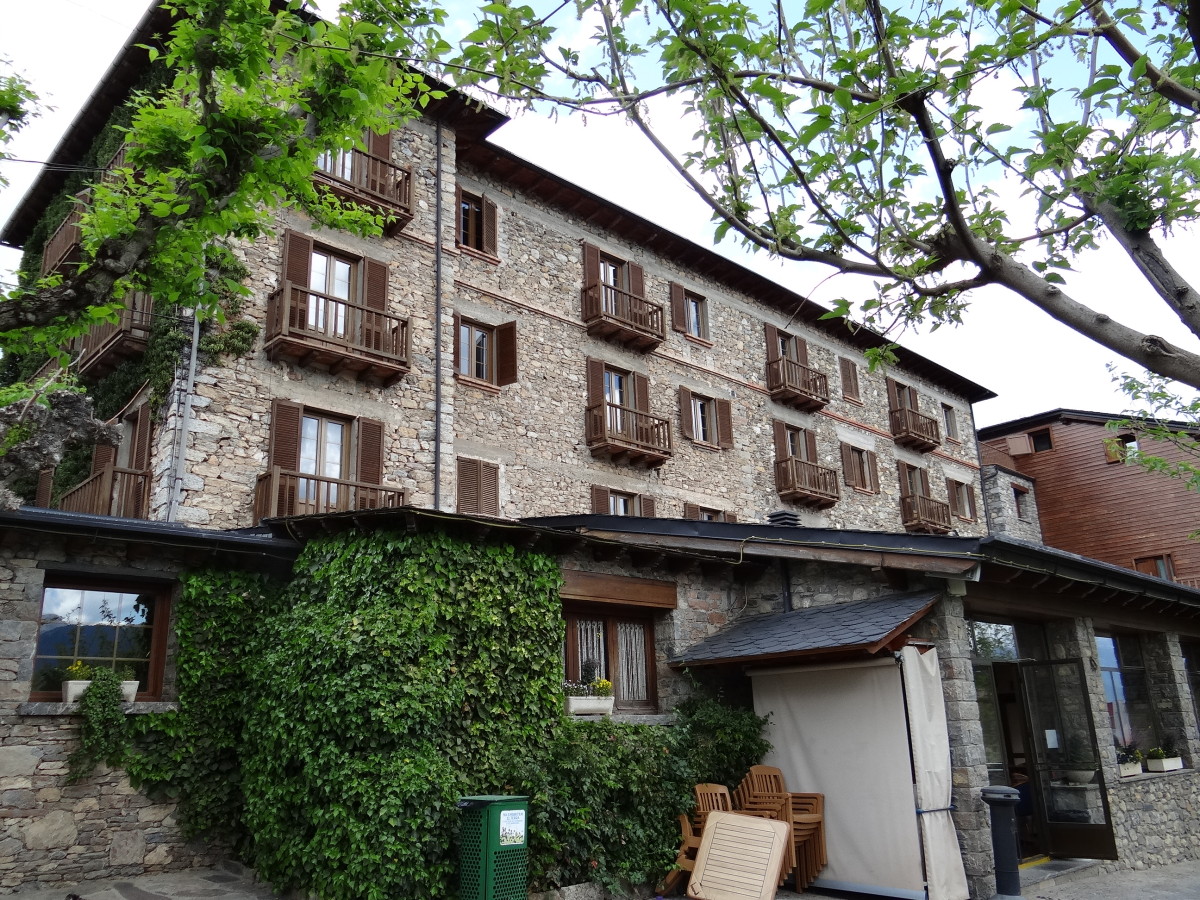 We have decided to end our time in Catalunya, by hopefully relaxing in the Pyrenees of Spain at Hotel Muntanya and Spa – Cerdanya Resort.

It took most of the day to get here because we left Lloret de Mar in the morning and took the back and mountainous roads that zigzagged around the hills.

When we arrived we were really surprised to find ourselves in a tiny stone village, set off the road about 1 km up.

The Hotel Muntanya and Spa – Cerdanya Resort original building is really quite old, and has an extension on the side, and another building across the road that makes up the resort complex.

We were in the new extension area and were really pleased with our two-story suite.

They had given us the very end room, so the view across the valley to the snow capped mountains was just brilliant.

This suite felt like home. I could easily have stayed a week or two here.

I really do hope we can come back and spend longer. As this is part of a resort, they also have larger family units (some having the grooviest sofa bed that forms a bunk bed), and a campground down the road is part of the property too.

They organize many kids and family excursions and activities, and it was a shame we already had plans to go to Naturlandia in neighboring Andorra on our one full day, or we would have stayed and played.

I loved the airy feel to our upstairs bedroom. The beds also separate to make two singles.

I liked how I could go downstairs in the morning and make a coffee and have my personal quiet time in peace with a “cuppa”.  I carry my own coffee making facilities. It is a tiny immerse to boil water and a little metal plunger, as I like to wake early around 6:00 a.m.  Often too early to toddle down to the cafe or restaurant.

Another feature that impressed me was the bathroom. Large, clean and classy. And it had a bath we used two times.

I have been suffering from shoulder and neck pain of late, and it has even caused a migraine with vomiting in Lloret de Mar, so I decided to book a massage in the spa area.  The masseuse was just fantastic, and yes, the headache left.

During that time the Kids Club at Hotel Muntanya and Spa – Cerdanya Resort was open, and so I left Explorason there to rock climb and play. There is also a separate full-size rock climbing wall outside).  He was the only child as it was still a school night, and the attendant was an older lady who only spoke Catalan and Spanish.  I must say I was concerned as Explorason really didn’t want to go and thinks he is getting too big for Kids Club.

But I came back to him thinking the lady was just lovely and he had been talking to her in Spanish, and they had been playing football together.

After my massage I had somewhat raced through the Spa Centre, being concerned that my son was having a miserable time. How wrong I was!

After my massage, I changed to my swimsuit, and I first used this area in the Spa Centre (behind the wall you can see in the photo below). This path was foot sensitizing, where you walk shoeless on the white pebbles. There are jet sprays that mist and suit at different forces and temperatures. Nothing like I’d experienced before, might I add.

Then there is a private pool indoors in another room. Not too good a photo as there were an older couple at the end having a bit of a romantic time, and I didn’t want to intrude. It was lovely to see.

I decided to leave the couple to enjoy their time to ether, and headed upstairs to the relaxation area of the Hotel Muntanya and Spa – Cerdanya Resort Spa Centre.

I had the beautiful jacuzzi all to myself.

It was just the right warmth for me, and I sipped orange juice from the complimentary hot and cold drink health bar in the next room.

It was just a perfect time for me.  Time to think and to relax. Something I don’t actually get to do often. Most times I have a child by my side, so it is rarely “me” time.

This is definitely another reason I’d like to return.

I returned to the Kids Club and Explorason couldn’t have cared less, as he was having a great time.

Whilst we were there we had two occasions to use the indoor slightly heated pool.  I was quite happy with the temperature of this pool. I really thought the way the glass roof and front door opened up was just brilliant.  It leads to an outdoor grassed area, which was by the Paddle / Racquet Ball Court area.

There was a small tiled long toddler pool on the side too.

We decided on the first afternoon we used this to “get fit”. So Explorason had us doing pool laps.  He wanted to practice the new swimming technique he had learned with his swimming lesson at Sheraton Miramar Resort in Egypt.  I think we managed 15 laps with “no push off’s” (no using our feet to push off against the wall).  It felt good to swim.

The second time we used the pool it was late afternoon, and there were so many children that I didn’t stay in so long.

Sadly some adults think that by throwing screaming and crying children into a pool beyond their depth is a good way to overcome their fear of water.  Of course, it isn’t.  I was quite pleased Explorason had a chat with one of the Grandparents who did this to a crying girl who was about 7 years old.   No fault of the resort of course.

Instead, we went and layout on the sun beds outside near the grassed area.  It was a lot more peaceful.

The dinner time here was a treat.  On our first night, it was a Medieval theme. The staff all dressed up in Medieval costume, and the food was also themed, and the service was really good.  I had the best soup I have ever had.  It was a thick vegetable and I had two serves. I liked their health approach to the variety of dishes they offered.

Explorason came back with a big chunk of meat, and a plate of hot and cold vegetables.

But of course, he had to leave ‘a pocket’ for dessert.

We had organized to have a packed breakfast on the last day as we needed to head off early to drive to Paris.

I was up at 6:00 a.m. – sick again.  I had a horrible migraine and it was all I could do not to be sick.  I could hardly pack and the nausea was horrendous.

I ended up going to the restaurant downstairs, and the lovely staff gave me some toast to eat.  That way, I could take some tablets.  They were so kind.

We drove to Paris and the tunnel road was closed.  This made our trip a lot longer.  Three times I stopped and had a sleep and Explorason even gave me a good massage as I lay out for an hour on a picnic table.  Thankfully it abated by about 7:00 p.m.

We arrived in Paris at about 9:30 p.m – a total of 12 hours – it was officially Mother’s Day and not the best Mother’s Day to remember.

Paris seems like another world. It is goodbye to Spain, and all the wonderful people we met, and the great times we had.

A chapter of our journey we will never forget, and really hope to return to again.

Thank you to all of the people we met that made our time so special, and a big thank you to Catalunya – you are incredible!

Breakfast: Yes – we chose the full board option

Bar: Separate bar and cafe to the side of the restaurant

Child-friendly: This is a family-friendly resort and children are welcome.

In the Spa no children are allowed except a small period on Sundays, so adults can relax