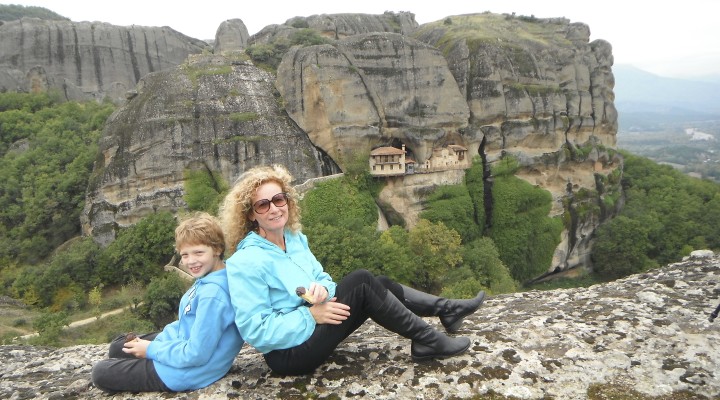 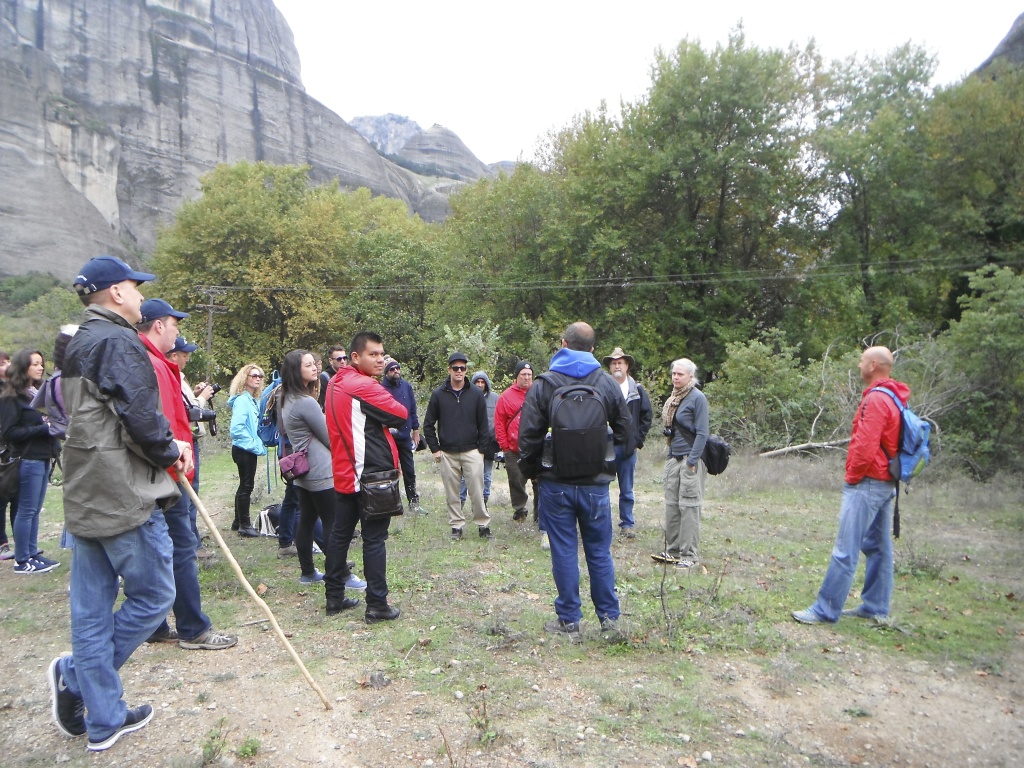 The air is crisp and cool, and the air is filled with anticipation. And, high up in the air, perched on rock ledges and cliffs, are 20 monasteries that are about to unfold some of their mysteries to us today.  We are about to embark on a hike over several kilometers to discover The Mysteries of the Monasteries of Meteora.

Only 6 of the monasteries are left functioning.  But the ruins of many others are clearly visible.

We woke early and enjoyed a hearty breakfast at Hotel Famissi, and have been excited to start our exploring for the day.

Explorason is still nursing some of his wounds from falling off the Segway in Athens.  So we will take it slowly for him.

Our guide from Visit Meteora is Lazarso, and along with George, we will be taken to some of the less explored sites of this area.

We don’t get far when suddenly Lazarso lets out a yelp and jumps into the shrubbery.  No, it is not some wild animal he has seen, but wild mushrooms.  Quick as a flash, he flicks out his pocket knife and separates the stalk from the earth. 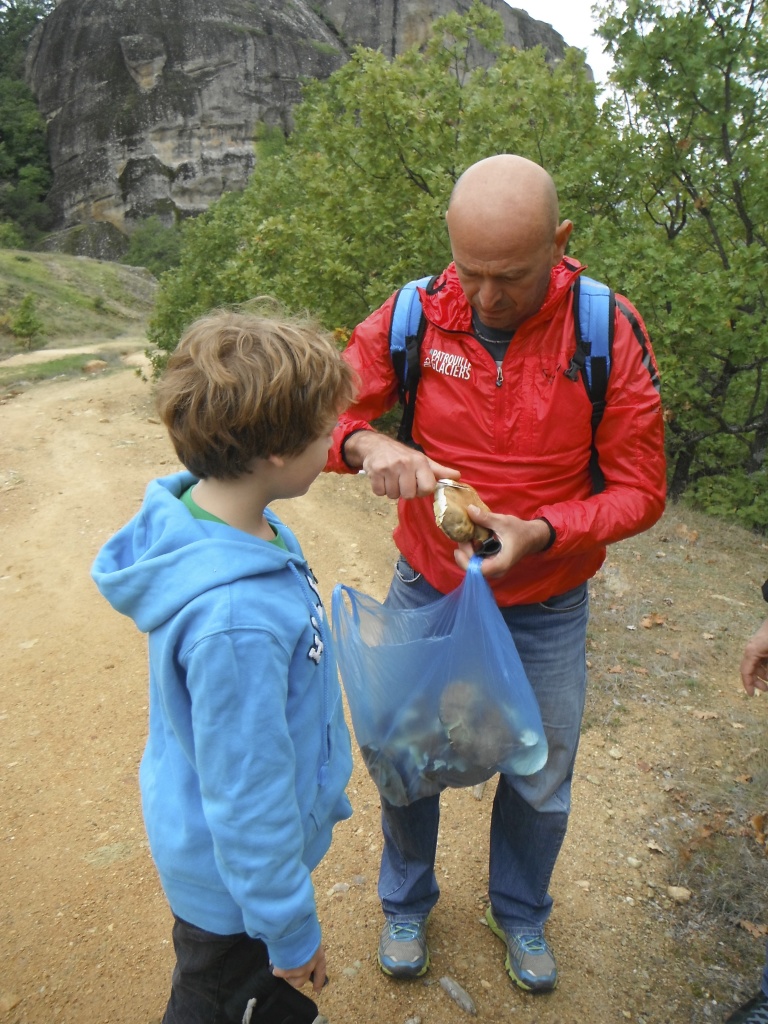 ©Exploramum and Explorason – learning about fungi

Before we know it, we are all trying some – and even Explorason gave it a go, and are begging for slices of more. 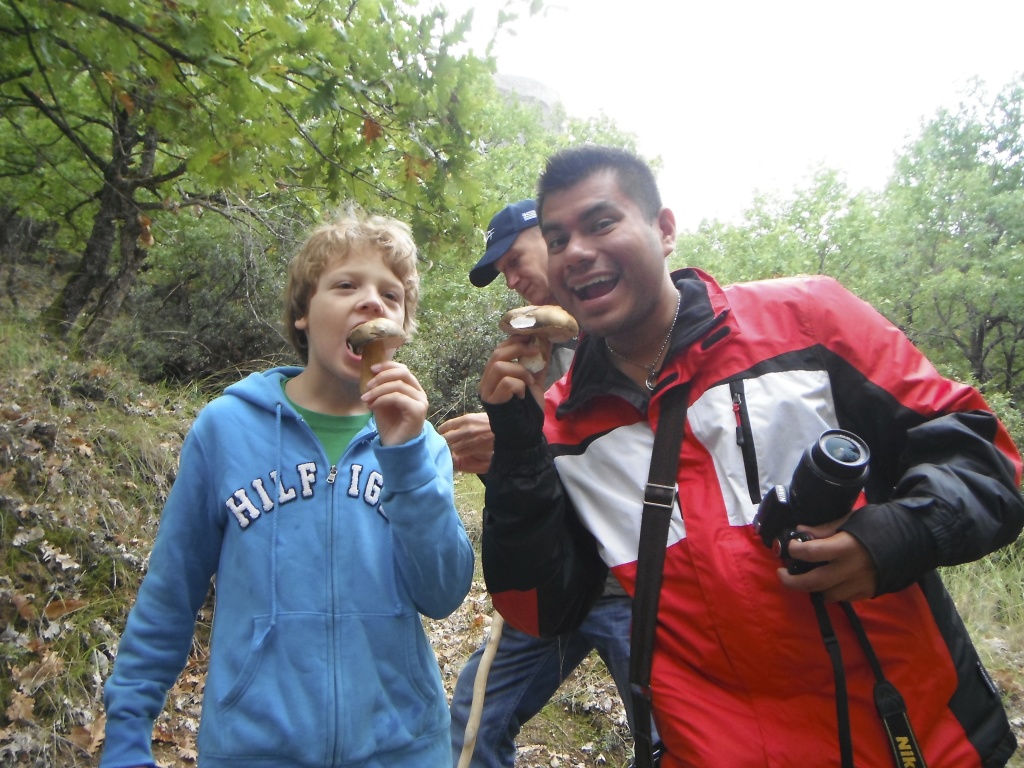 ©Exploramum and Explorason – a taste of the wildlife

The low forest area was beautiful and peaceful, as we walk along toward the steady incline to where the first monastery can be spied. 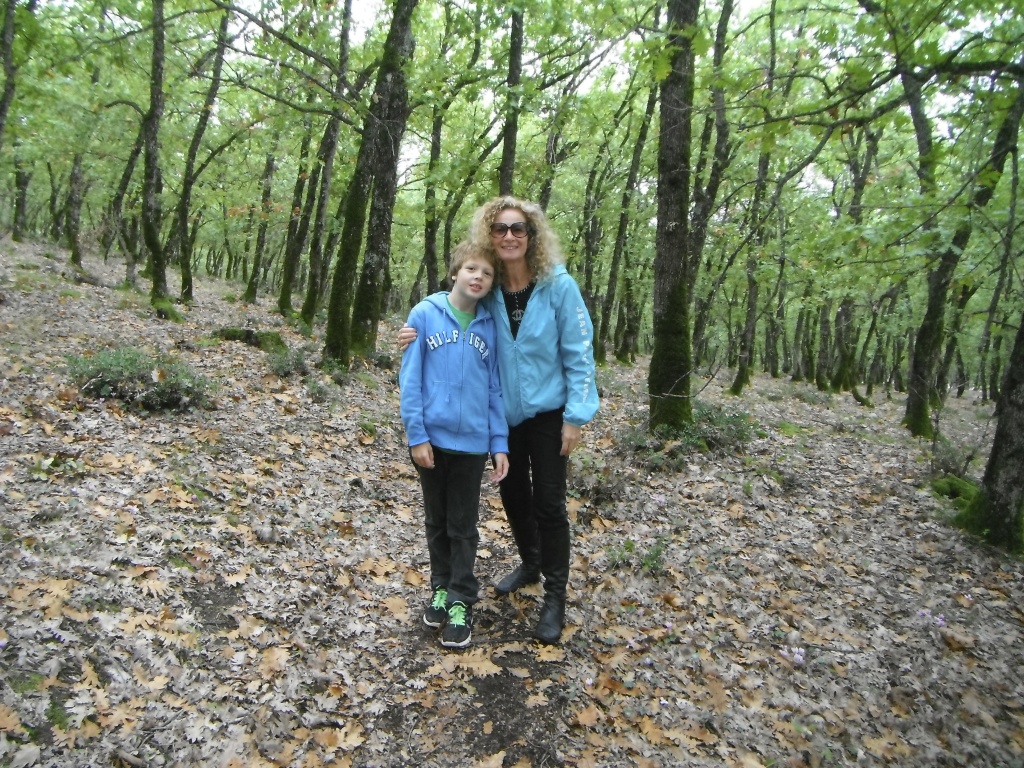 And there, in the rock face, it is.  These monasteries are considered sacred, and visitors are generally not allowed.  Monks used ladders and ropes to gain access, and then they pull up the ropes and ladders so no-one else can come up. Often they will let down a bucket on a rope, and the passers-by would give them gifts of food. 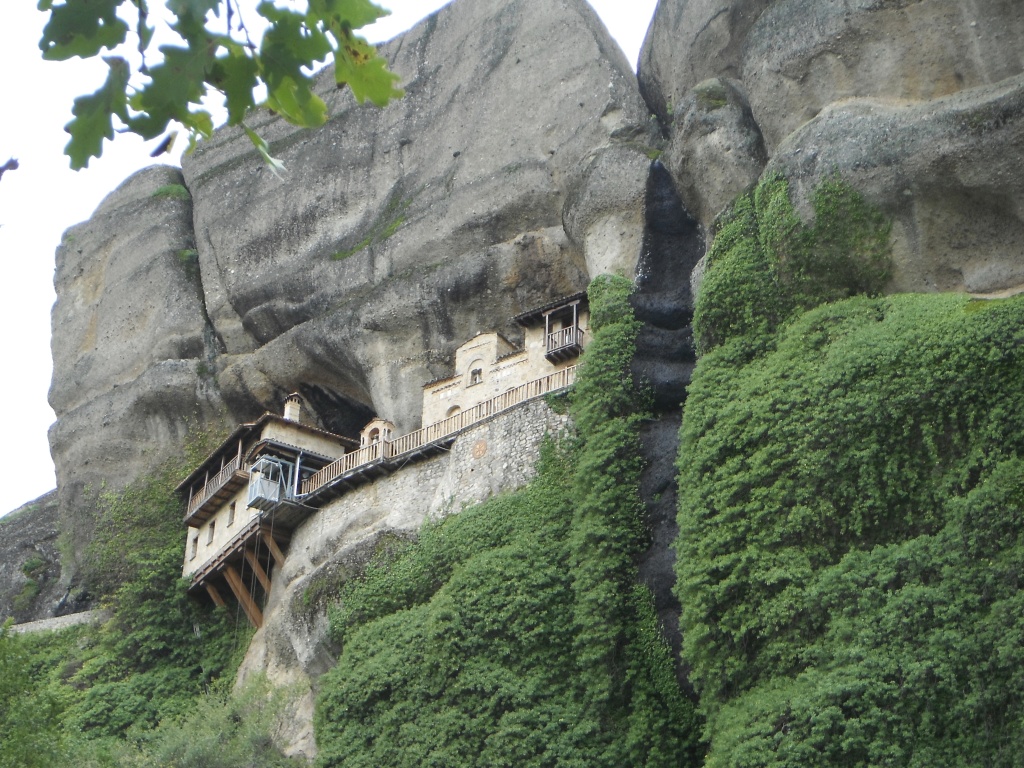 ©Exploramum and Explorason – monasteries wedged in the rocks

We get to the top of one of the rock cliffs, and there is a lone cross.

It is said they monks build the monasteries up there to be away from temptation, and to be closer to their creator, God.  It is lovely up here. I can see why the idea would appeal to some, who chose a life of discipleship to their Maker.  Even as a Christian, I would have to say that is a hard decision, few of us could make or live like. 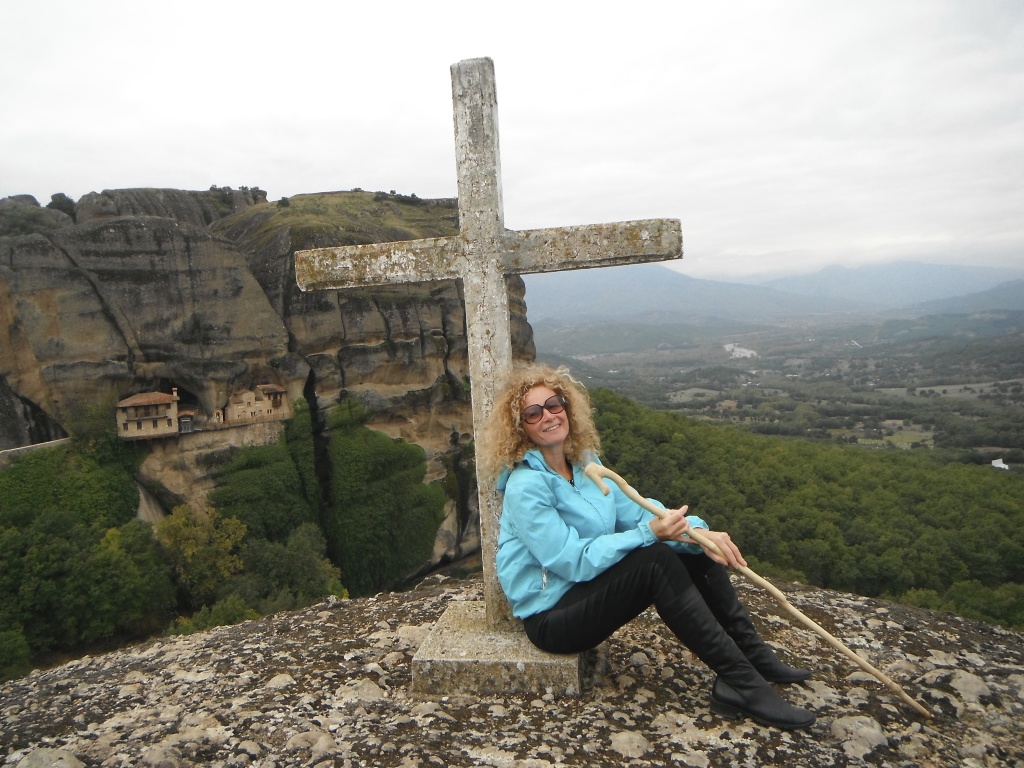 ©Exploramum and Explorason – closer to God in Meteora

It just is a cool place – supper cool.  It is something you feel. And I doubt a good part of the world even knows about this majestic region. The geology alone is incredibly interesting, with conglomerate along with some limestone and granite forming the rock. The wind and water have eroded them over thousands of years. 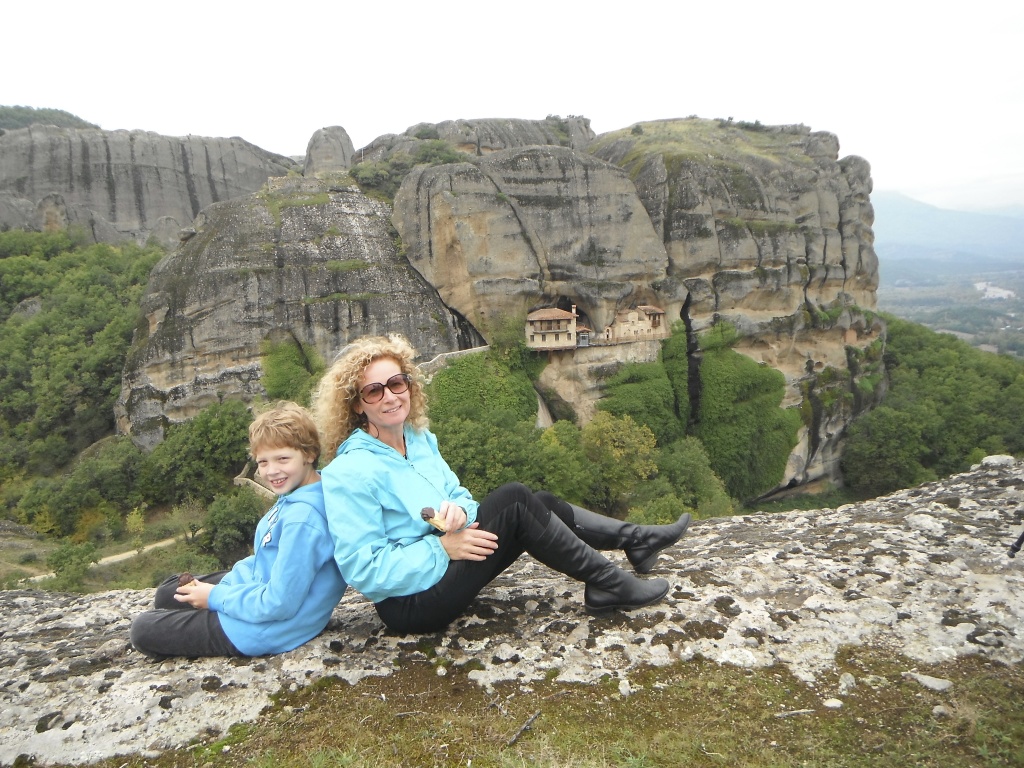 ©Exploramum and Explorason – posing for a photo with a perfect backdrop.

We walk on and Explorason is struggling a bit with his aches and pains, but he keeps on going.  Both the guides are very considerate and ask him if he is OK which I thought was really nice. We stop to learn about wild saffron.

When people ask how I educate Explorason, this is how we do it. We feel it, rubbing it between our fingers.  We taste it. We see it, and we can even smell it.  And here you hear the wind too, gentle whistling through the rocks. 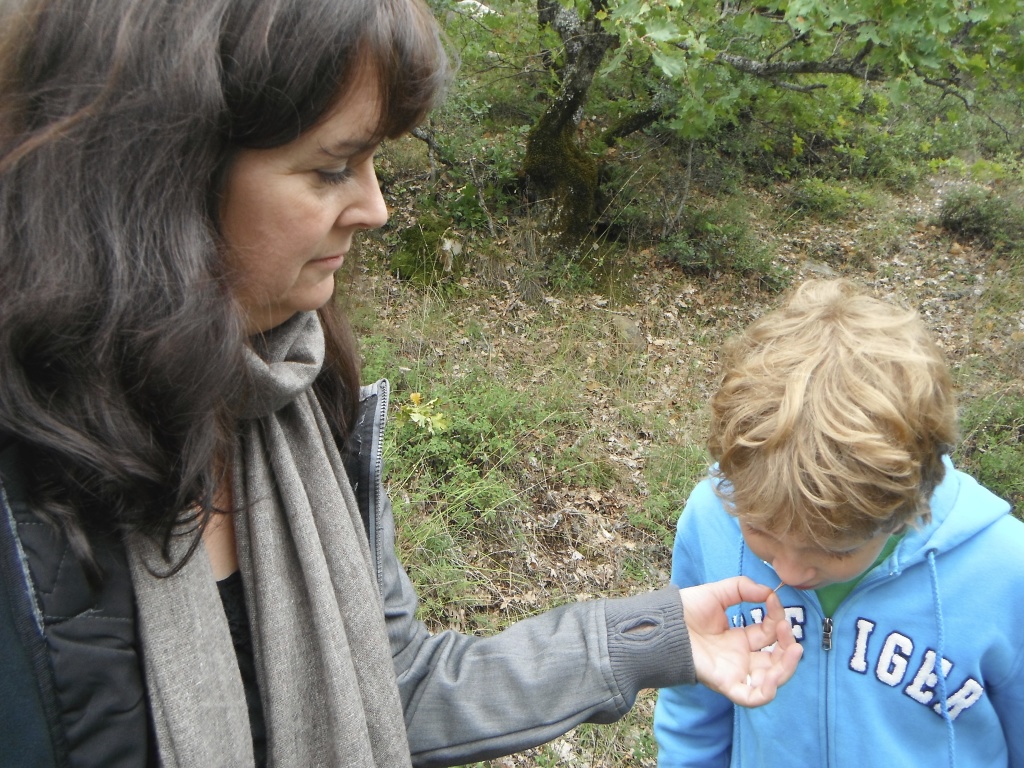 Down below we see another two monasteries, and then I see the coach loads of people. 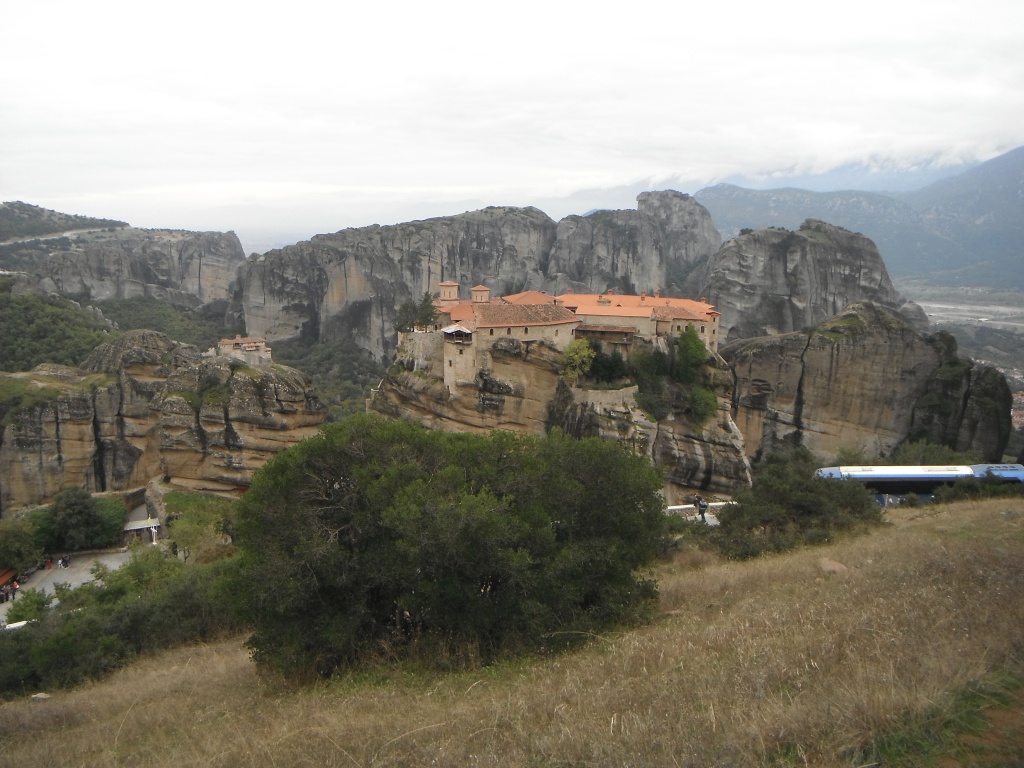 ©Exploramum and Explorason – two more monasteries appear before us

It has been so nice to be with Visit Meteora Tours, as they took us to quiet areas of discovery – not madly populated by tourists.  But in saying that, overall there are few tourists in the area, and I hope more come to discover the wonders of Meteora. 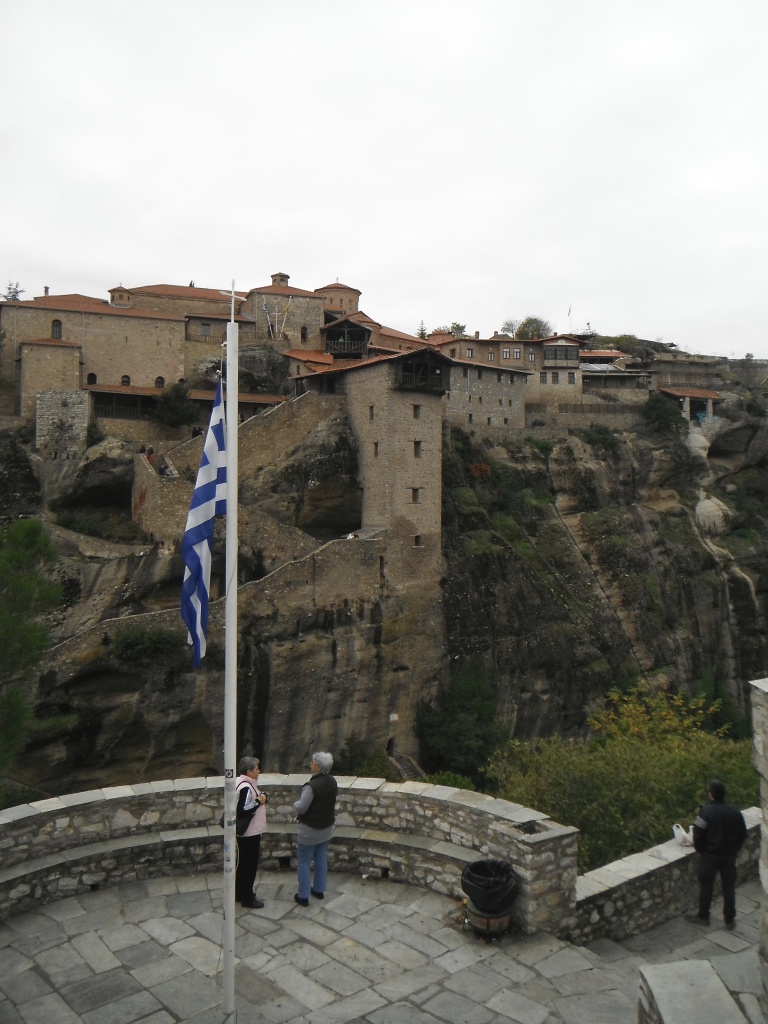 ©Exploramum and Explorason – these monasteries are rarely open to the public

And now it is time for us to go in and explore the inside of one of the monasteries – The Holy Monastery of Grand Meteoron.

We are told ladies are to wear a skirt, and if we desire, cover our heads.  Both the skirts and the scarves are provided free of charge.  This is a working monastery and respect and modesty is required. 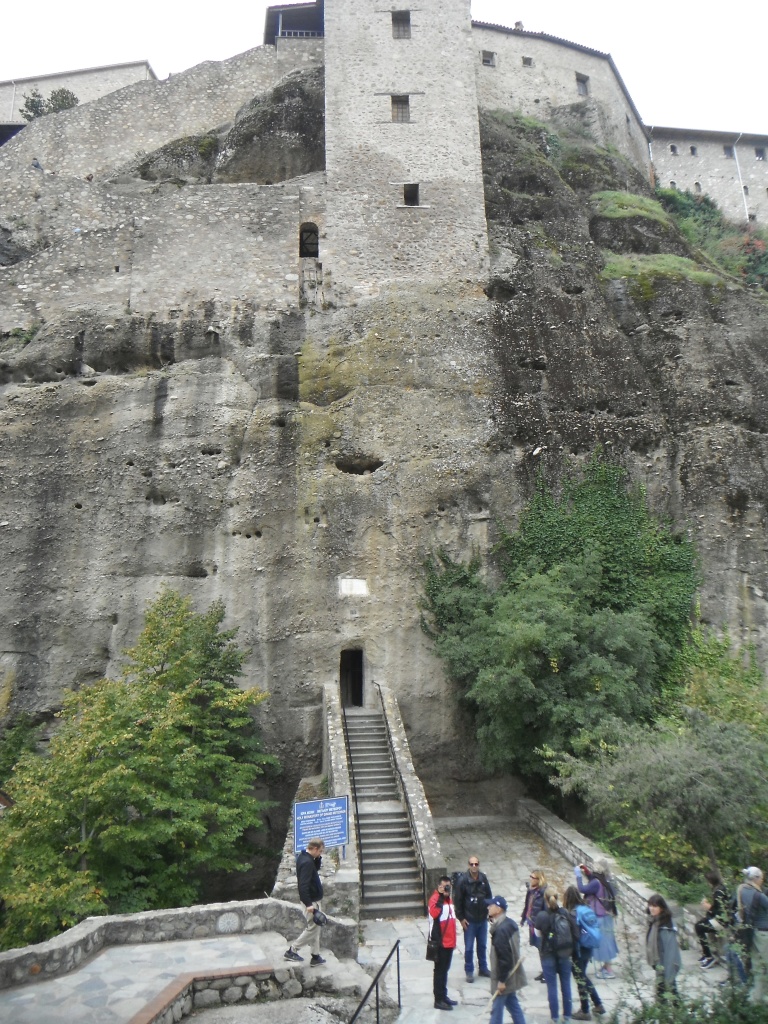 ©Exploramum and Explorason – this staircase was added in later years

We have a guide who is incredibly great with Explorason – so education is out-sourced, which I really like.

Here we see a room of human skulls. No, the monks are not cannibals –  these are a revered religious member of the past, and this is an honor to have your soul on the shelf! 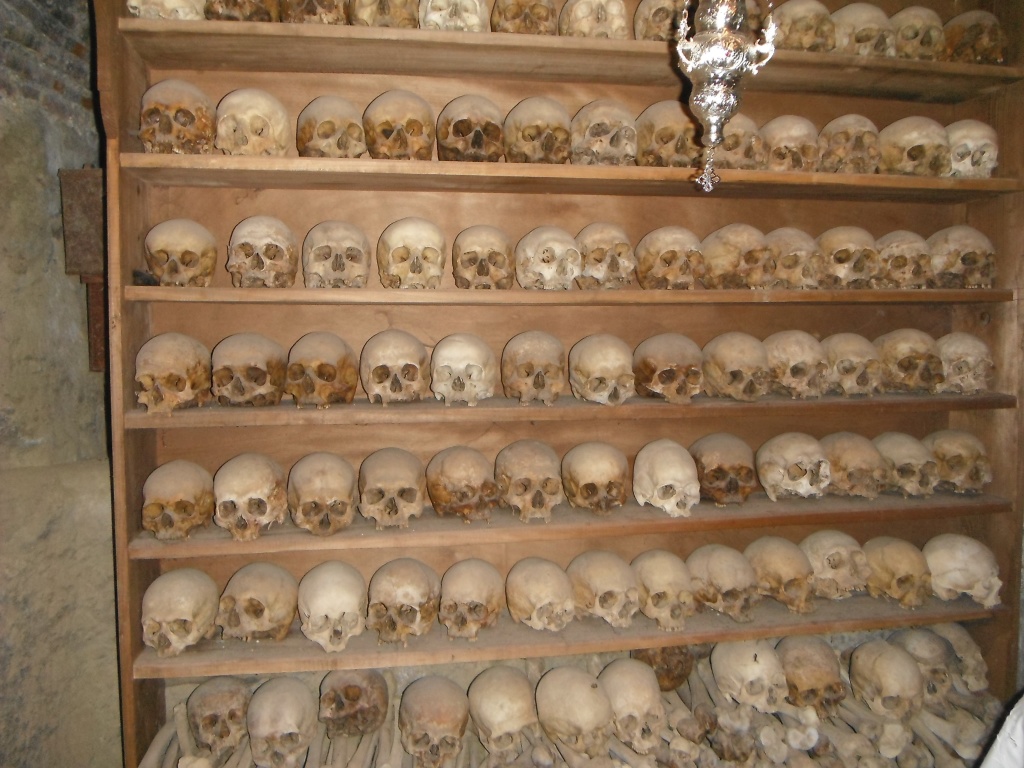 ©Exploramum and Explorason – heads of honor

Just look at this view. Stop and think of how these people must have suffered building these monasteries.  It is just a sight to behold.

I would love to return in winter and see it covered in snow – we might just have to do that after we finish in Turkey and that area. 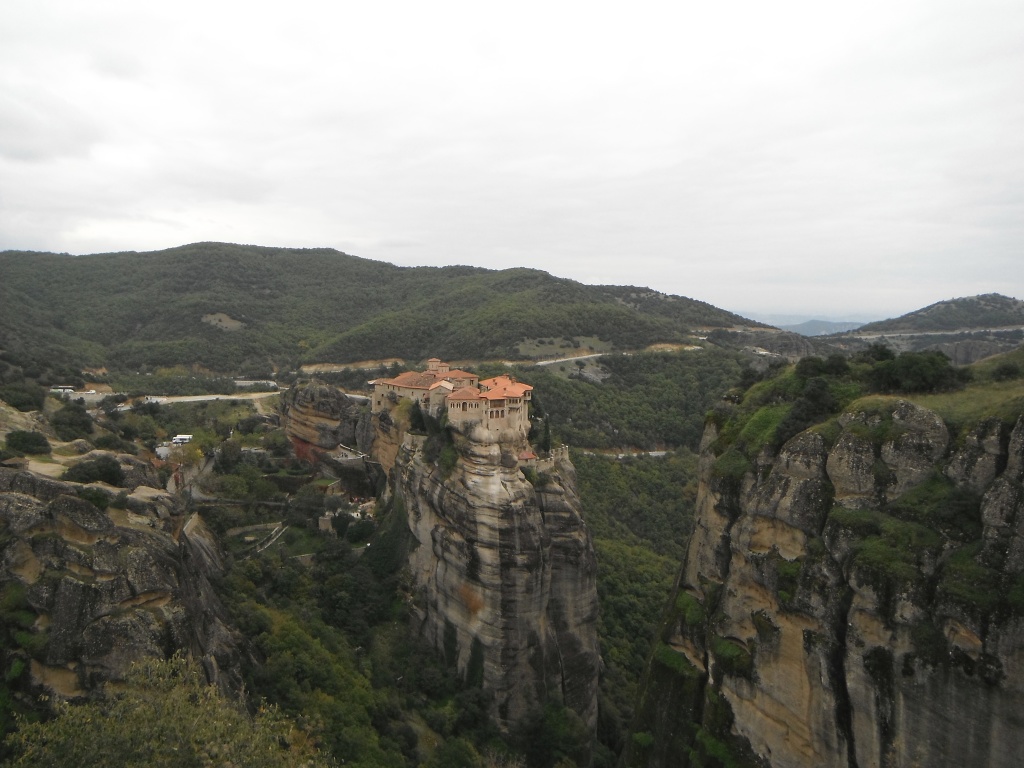 ©Exploramum and Explorason – another majestic monastery

Inside most of the monastery, photographs are not permitted out of respect.  Here is a lovely painting we were allowed to photograph. The guide tells Explorason about how the ancestors knew there was an unknown God even in the times of mythology. So then we start a lesson on mythology.  It is basic but it is interesting that a nine-year-old can be learning about such a diverse subject that probably would not come up in formal schooling for his age.  I was really impressed with the guide and how she took the time to explain it to him.  For several minutes after as we walked down the stairs out of the monastery we were discussing mythology. 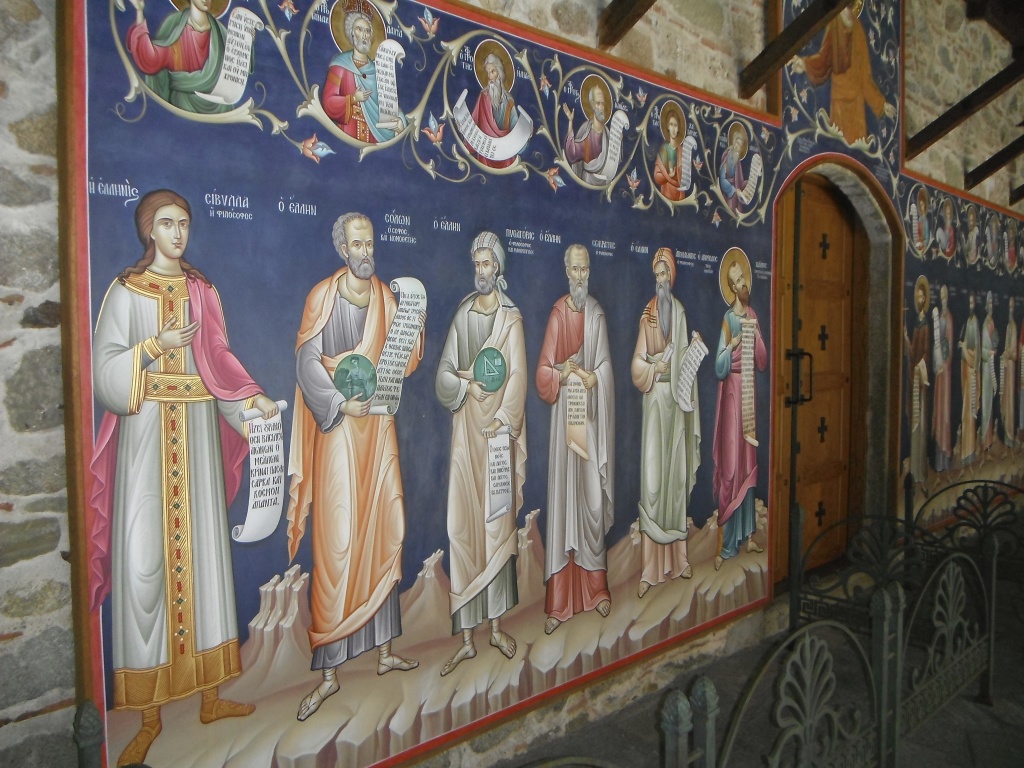 We finish up and head back into town – you can read about that part of our day here in our other blog.

As it is late afternoon when we finish in town, we are privileged to go on yet another tour.  We see yet more monasteries, and with the backdrop of the early evening skies, it makes for a heavenly setting. 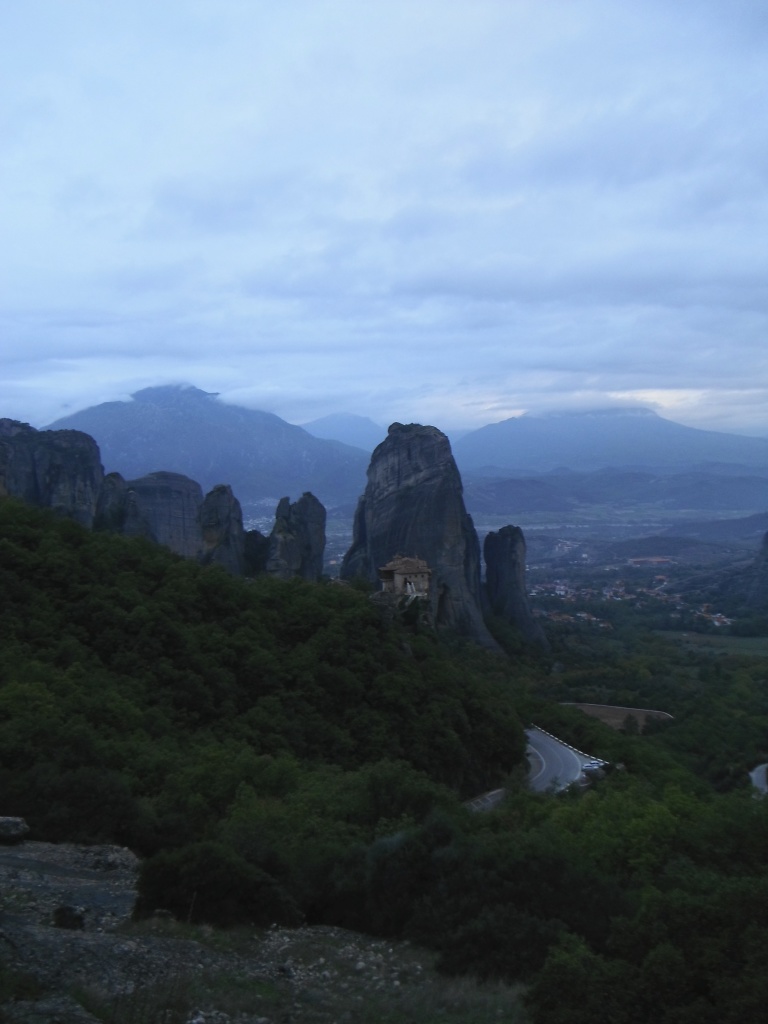 We are taken to a final lookout.  It has been a long day and filled with so many amazing sites. 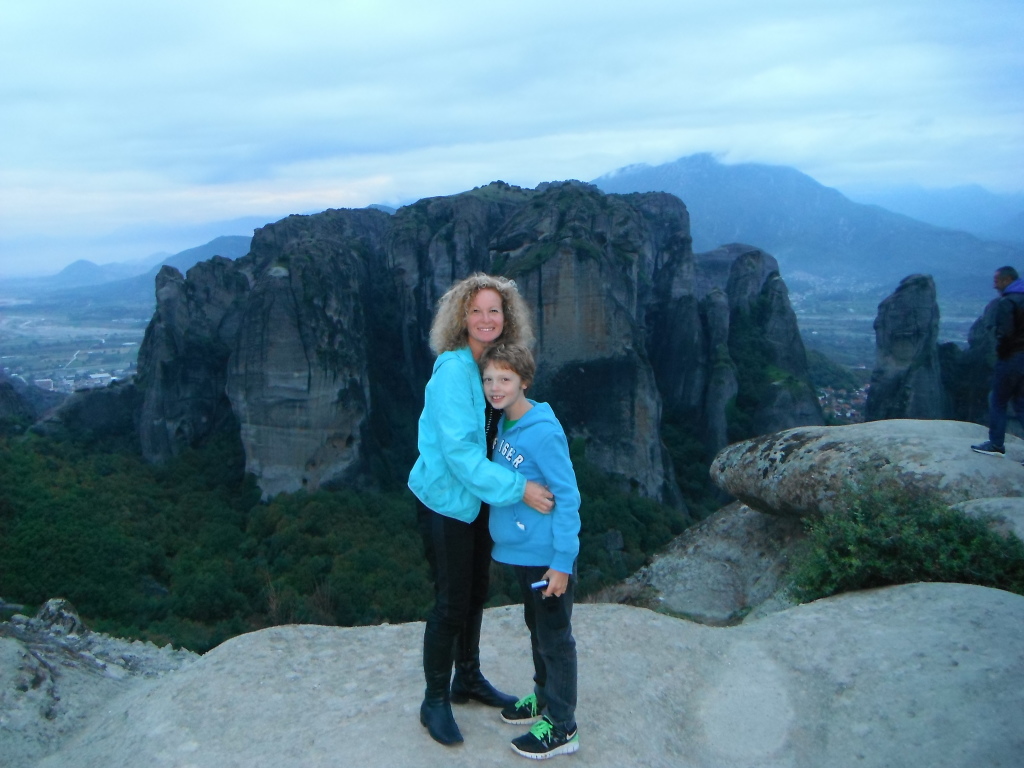 ©Exploramum and Explorason – perched on a rock, we stand to admire the rocks at the end of a glorious day

As the lights of the town below just start to twinkle it is time for us to return to Hotel Famissi.

We are both so thankful to Visit Meteora for the opportunity to see some of the most sites in this area.

They have just treated us so well, and we have really appreciated all they did to help make our time so memorable. 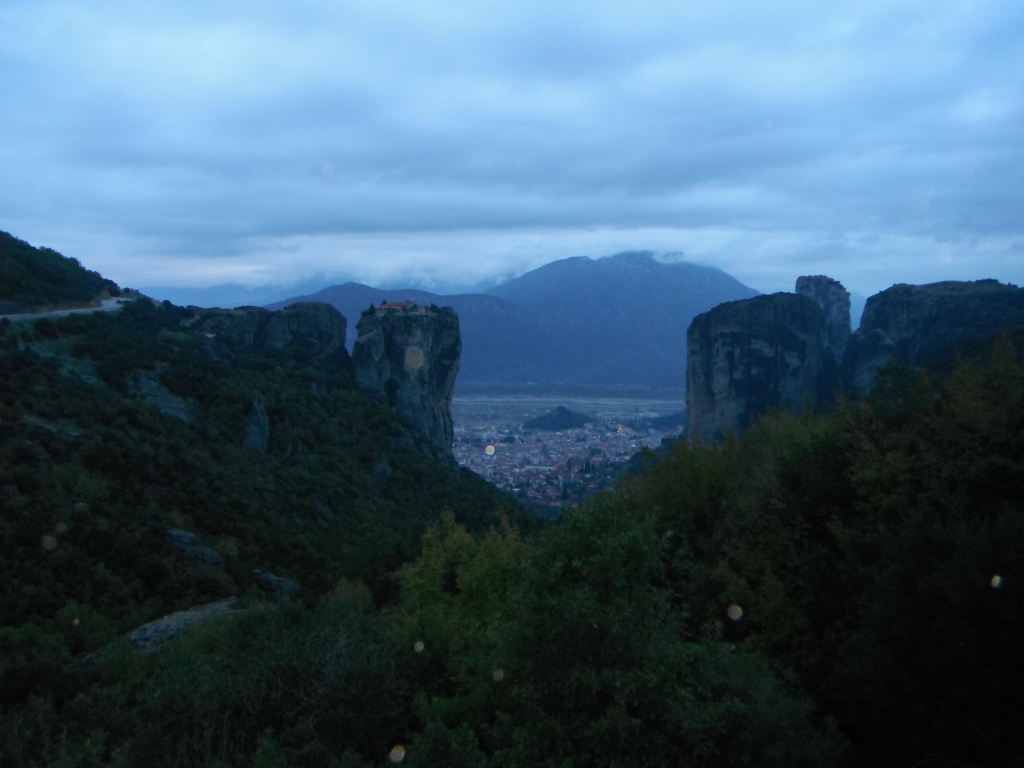 ©Exploramum and Explorason – Meteora as the sun goes down

©Exploramum and Explorason – Explorason took this photo at our final viewpoint