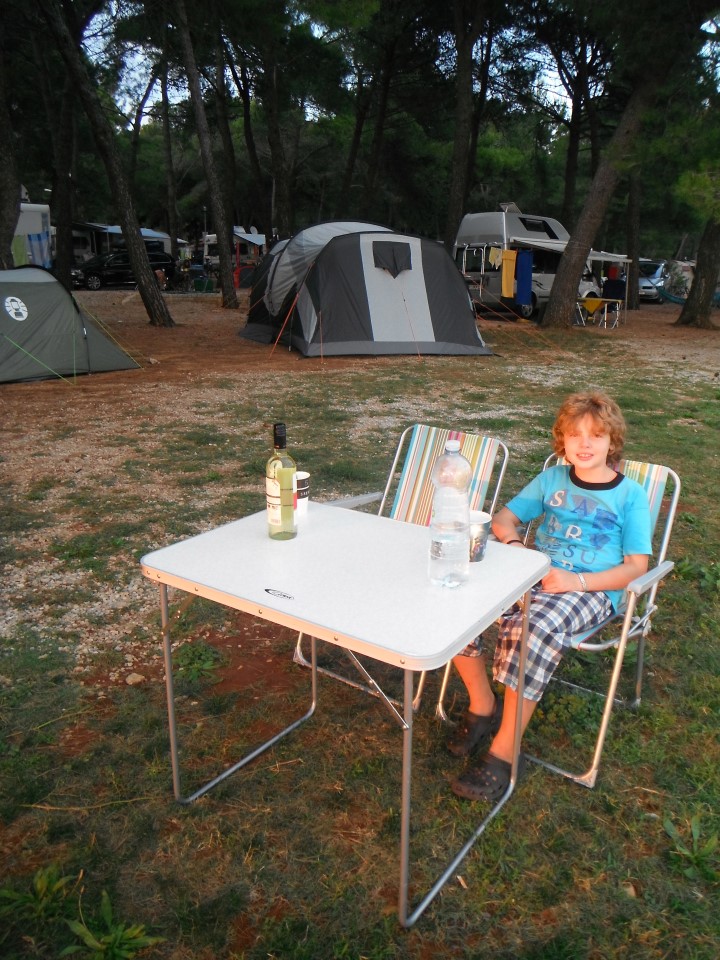 Leaving Venice Italy, it is now time to drive toward Trieste, and then on to Slovenia.

Having been told the tolls are quite high on this motorway, and also not being a motorway fan, we drive through a lot of farmland.

We stop for food, and the little store is so busy it takes a good half hour for a few bananas and carrots to munch on.

The km average is a bit slow, and it seems to take forever to get to Slovenia where we plan to have lunch.

Finally, we arrive at Koper, Slovenia around 1:00 p.m. – starving as this nine-year-old says.

So where do we head – MacDonald’s of course!

They have some great price meal deals.  The lady speaks English and we get great tips on places to see.

But we get sidetracked.

First, there is LIDL Supermarket across the road, so we head over and purchase some supplies – at about half to two-thirds the price of Italy.

As we leave we see a beggar lady. She is neatly dressed and has good shoes. No dirty hair, or nails. She is groaning and bowing for money.  I think maybe her circumstances have left her without money, so I have some spare cans of food Explorafriend had bought earlier in the trip we don’t eat and was planning to give them to her.  She obviously thought we went to leave, and so got up, pulled out her mobile / cell phone, and was joined by her trendy boyfriend who lit up a cigarette.  Explorason yells “you are a fake!”.  She completely understood and started to mock us along with her boyfriend.  It so disappointed us.

As we went to head back across the road we discovered a EURO store where everything is one Euro.  Then we discovered another.  We bought a couple of playthings and had a good look around for about one hour.  Koper is so neat and clean and nice.  Next, we went to visit the coast.

I had no idea the coastline is under 45 km long in Slovenia, so it seemed to be one town on top of the other. In fact, it was funny. We at and entered the town name in the GPS we first wanted to head to.

I like the little drink fountain in the wall – the front area of Koper along the water is beautiful.

We drove off and within 5 seconds it told us we had arrived – it as the next roundabout. It was quite hilarious!

From Koper, we went to Izola. that seemed over in five minutes.

Then we drove to Piran.

Here you must park the car and you can go behind the car park and down and there is a free bus.

We chose to walk down ourselves – about a 15-minute walk.  This town is incredibly touristy.  I wanted to buy a flag. But a tiny cheap flag of 15 cm she wanted five Euro. I laughed and left.  It was one you would get for a Euro anywhere else.

It is a pretty place.  Loads of tourists are sunbathing on the cement paths below.  Most of this coastline is rock, pebbles, stone, and concrete.

There are many small boats in the little harbor, and this is a very historic city.

The square had a mini market and I was able to try local wine and Schnapps made with herbs and fruits. Explorason, of course, had to try the Gelato.

There are a lot of little laneways, and cobblestone and flagstone sheets and alleyways.  You can climb up and see the steeple, or go over and see the church.

Old buildings cross over the top of you above in medieval style.

It simply is a quiet little town.  What surprised me were the number of people sitting outside homes with picnic style lunches. Check hanky cloths and picnic baskets. Tubs of iced beverages.

We headed towards the aquarium and planned to enter but were bombarded with a busload of excited school children.  We could not even get near the outdoor displays let alone the indoor ones, so we decided to move on.

Here is a telltale sign of the old war days, so we talk a little about the history, but to be truthful I don’t know a lot – except parts of Slovenia used to be Italy.

Next, we drive around to Portoroz.  This is tourist heaven. High rise buildings and shops are all along the boardwalk.  We decided we would rather go and see the Salt Mines.

I had earlier tried to find the Grotto Caves but the GPS refused to give me the location so we gave that a miss.

This time the GPS gave me an instruction, but I found a different road sign.

It was now 4:00 p.m.  The man at the office tells me we must walk across the salt flats to get to the museum.  There is no salt to be seen as in other places we have visited in the world.  He suggests we buy a pass and return in the morning to do the “other side”.  So I ask if we can just “do the other side”.  He points to a road.

So we drive about 1 km. Smack into the HR Border crossing.  We are stamped out of the EU.  Then we drive on and are waved with no stamp into Croatia.

I drive and sit stunned on the side of the road.

I don’t want to be in Croatia today.

I had planned 24 hours in Slovenia.  It seems pointless to join the traffic and go back. We can’t find the road to the salt ones either.  So I sit. I pull out the map book.  I have NO PLANS.  I ask Explorason what he wants to do and he points to a sign “Aqua-park”.

So we drive off in the direction of Istra – the first peninsula of Croatia.

We come to an intersection and get lost.  I stop and ask a man selling oil on the side of the road where it is.  I notice the KN prices and realize I have no Kuna.  Oh, this really is ‘winging it!’.

He tells us to take the motorway and holds up two fingers for number two exit.  This all seems fine until we realize we don’t have Kuna to pay the motorway.  We completely miss turn off number two!  We head on about five more kilometers and see toll booths.  Thankfully the guy speaks English.  Thankfully he also takes Euro. He points one way for the Water-park. He points the other way toward a town for accommodation.

We first go to the watermark and get details for tomorrow.

We then head to town and find an ATM. Things are feeling better.

All the Tourism agencies are shut as it is now after 5:00 p.m. on a Friday night and the vars are filling with workers.  The bar attendant tells me where there is a hotel.  We don’t find it, but instead, we find a campground.

At the Italian house-sit we were given a tent and camping gear to use.  We talk about it and decide to give it a try.  I agree as long as Explorason helps, and he is so excited, he is happy to do this (other times it would be like pulling teeth !!!)

We find the spot designated to us. It is a nightmare erecting the tent as all these people stop and stare. They sit with arms folded.  A lady comes to help. Then her boyfriend. Finally, the tent is up !!!

Then three groups of Germans start getting angry at us.  “You are in the wrong place”.  These are the same people that all sat and started as we erected the tent in the prime coastal viewing area and walking area to the beach.  Some are so angry.  I nearly cry.  I am trying to inflate air-beds with my mouth.  It is near dark.

The tent is facing the completely wrong way!  And it can stay. I am not moving it.

Explorason is an angel.  “Mum – leave that bed and come here”.  I go around the back of the tent and there he has set up the camp table and chairs.

He has the wine and water out of the cooler bag.

And I have a cup of wine with a “Batman” cup watching the sunset of Novigrad, Croatia

We end up having lovely neighbors and share dinner with them one night too, and camp for 3 nights.

There is so much to do, and it is a resort with kids clubs, pools, and trampolines.

But the best is Explorason gets to find a baby hedgehog the size of a pine cone.

Who would have thought we would end here?

Often the best places and experiences are completely unplanned.

Life is full of surprises.

Tomorrow I will post about the fabulous water park,  ‘Istralandia’.