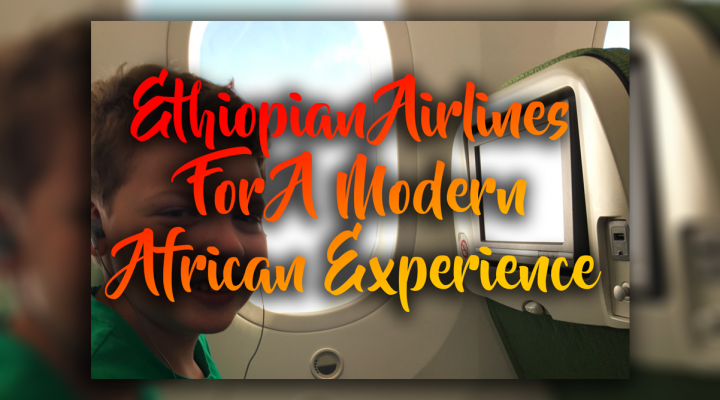 Our time has come to leave Kenya and getting to the airport was rather an adventure.

Firstly, I somehow looked at the times the flight from Ethiopia was leaving rather than when it was leaving Kenya, so that meant that our time to leave our lovely hotel was quite a dashing trip.  We had a bit of an eventful start.

Firstly we passed a dead body on the side of the road. Poor guy was not covered up and he was definitely dead!  I had to get Explorason to look the other way whilst we were stuck in traffic right in the vicinity.

Not 100 meters late, we came across another accident!

And then we were stuck in a traffic jam and I was panicking we would barely make it on time.

When you arrive at Nairobi airport there is a crazy system.  You have to jump out of the taxi (now 90% of taxis in Nairobi are just private cars that make extra dollars acting as a taxi service. they do not have a taxi sign, and they are not authorized.  So you can imagine my panic as we are forced to get out and leave our earthly belongings including laptops and cameras behind with a stranger.  We then have to go through a screening room, but the line up for that takes about 15 minutes, so the whole time I am madly stressing trying to remember the white car and the first 3 letters of his license number plate (I thought I was smart even thinking of that at short notice!)

When we finally get to the screening they were very laid back indeed!

As we hustle to the roadside we see a white car with the first three letters the same as ours drive straight off.  We were just panicking madly and Explorason starts to dash after him thinking he hasn’t seen us.

But – it wasn’t our driver.  About 30 seconds later thankfully he pulls up. WHEW!

We check in with Ethiopian Airlines with no hassles and we head to TAV Primeclass Lounge.

I had been hoping for a relaxed lunch but seeing we had confused our flight times, we had a relaxed breakfast and a good coffee instead as we waited for our flight.

Soon it was time to go, and we were not holding great hopes that this flight would be any different than other African Airlines – how wrong we were. 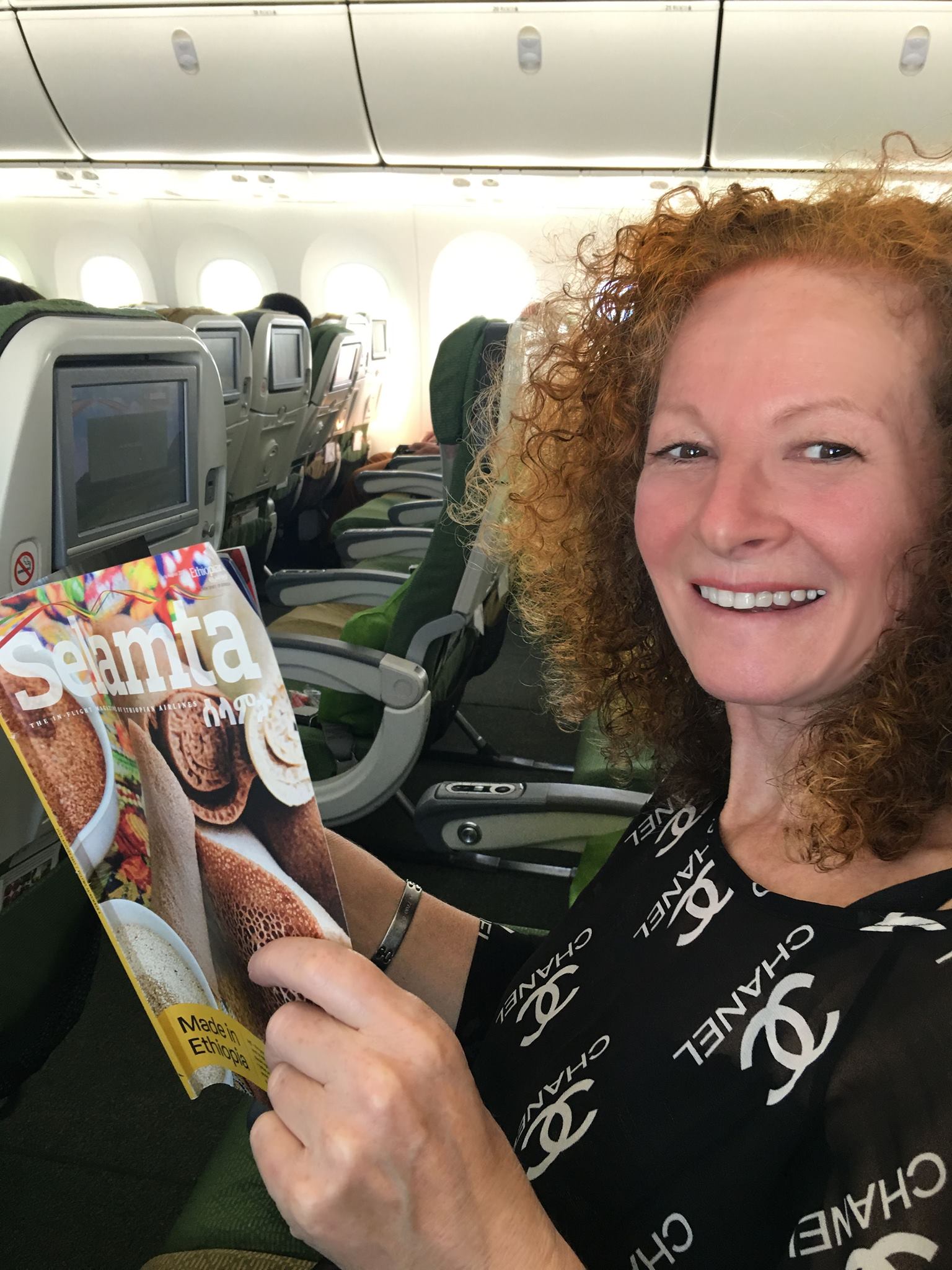 As we boarded the flight I looked around in delight.

I loved the traditional Ethiopian attires worn by the airline’s air hostesses. These attires look and feel very African. Being served by these air hostesses made me feel like I was traveling ‘with Africa’. It removed the gloom from my face since I felt sad leaving Kenya after an extended visit. This was so nice since I could keep staring at the uniforms and recalling the memories I have made in Africa. To me, the green color of the uniform represented Africa’s rich evergreen vegetation while the sunflowers reminded me of the beauty that Africa exhibits through its amazing wildlife and people.  I knew that this was not just an Ethiopian experience but an experience of Africa as a whole. 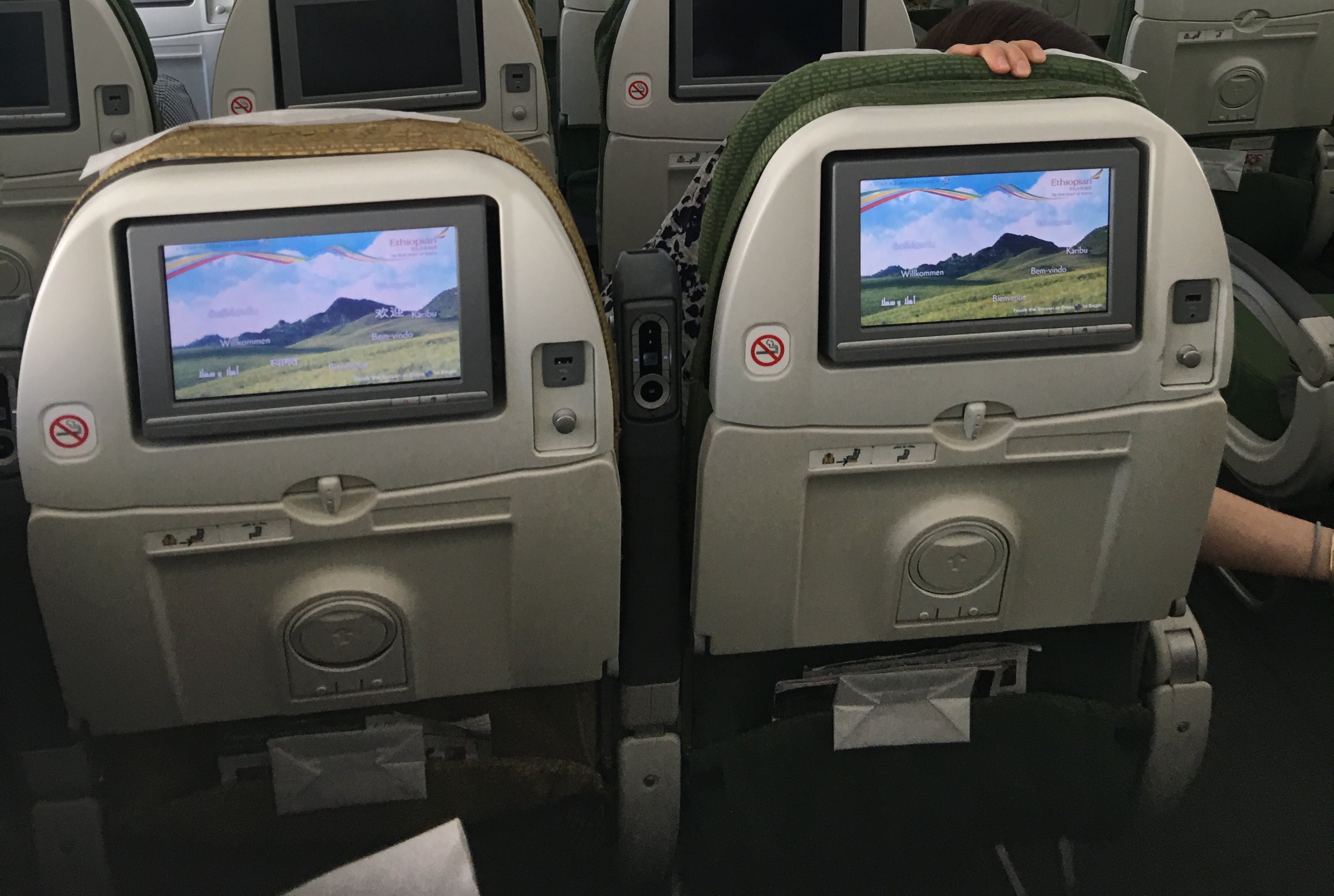 Most African countries are said to be third world countries or developing countries. They lack modern technologies and services. At least this is what most visitors think of Africa but Ethiopian Airlines proves them to be wrong – very wrong!

While some aspects of this are true, I believe that the continent is making and has continued to make great strides towards modernity. When you walk towards the Ethiopian airline, you tend to feel like you are walking into the future of Africa.

The airline has bought modern airplanes that rival those used by other international airlines from first world countries. In fact, our plane was brand new!  I think more than anything this was the most pleasant surprise to us.  Really lovely, and with a tasteful interior design theme, plus with all the modern facilities that we required for a relaxed flight. 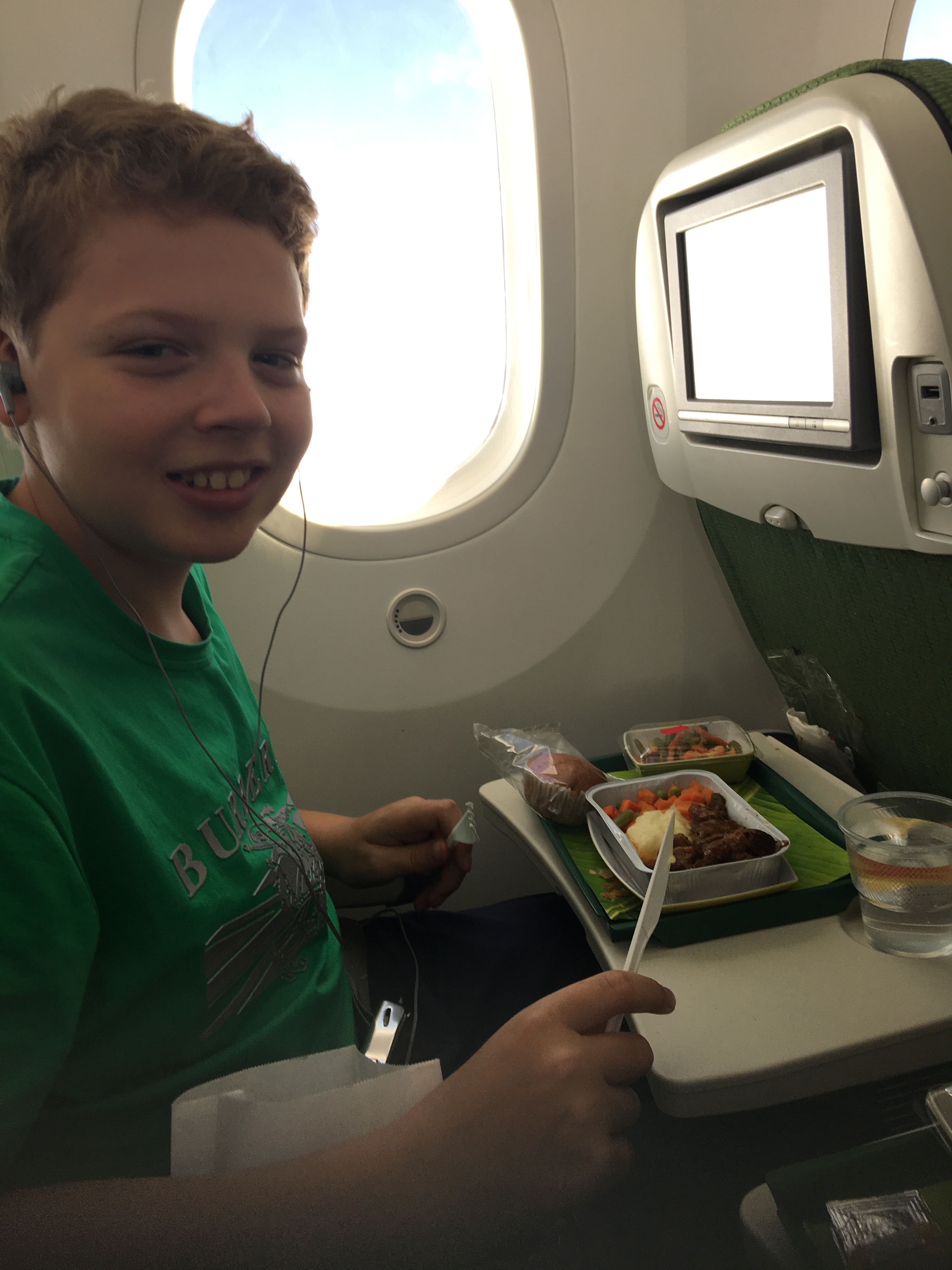 We experienced the difference!

Whilst some might say the meal served by this airline is similar to any other food served on other airlines, I felt differently – like they were inspired by an African culture. I felt this especially as I was served by the flight attendants who had beautiful African smiles.

By traveling with this airline I came to realize something that I would like to say is very amazing. I realized that every meal, regardless of its country of origin, tasted more like it was an African recipe just because of the African mood that had already been set in the plane by the staff.

I just loved that and ate every meal like I was eating an African cuisine, even if the meal was not African. 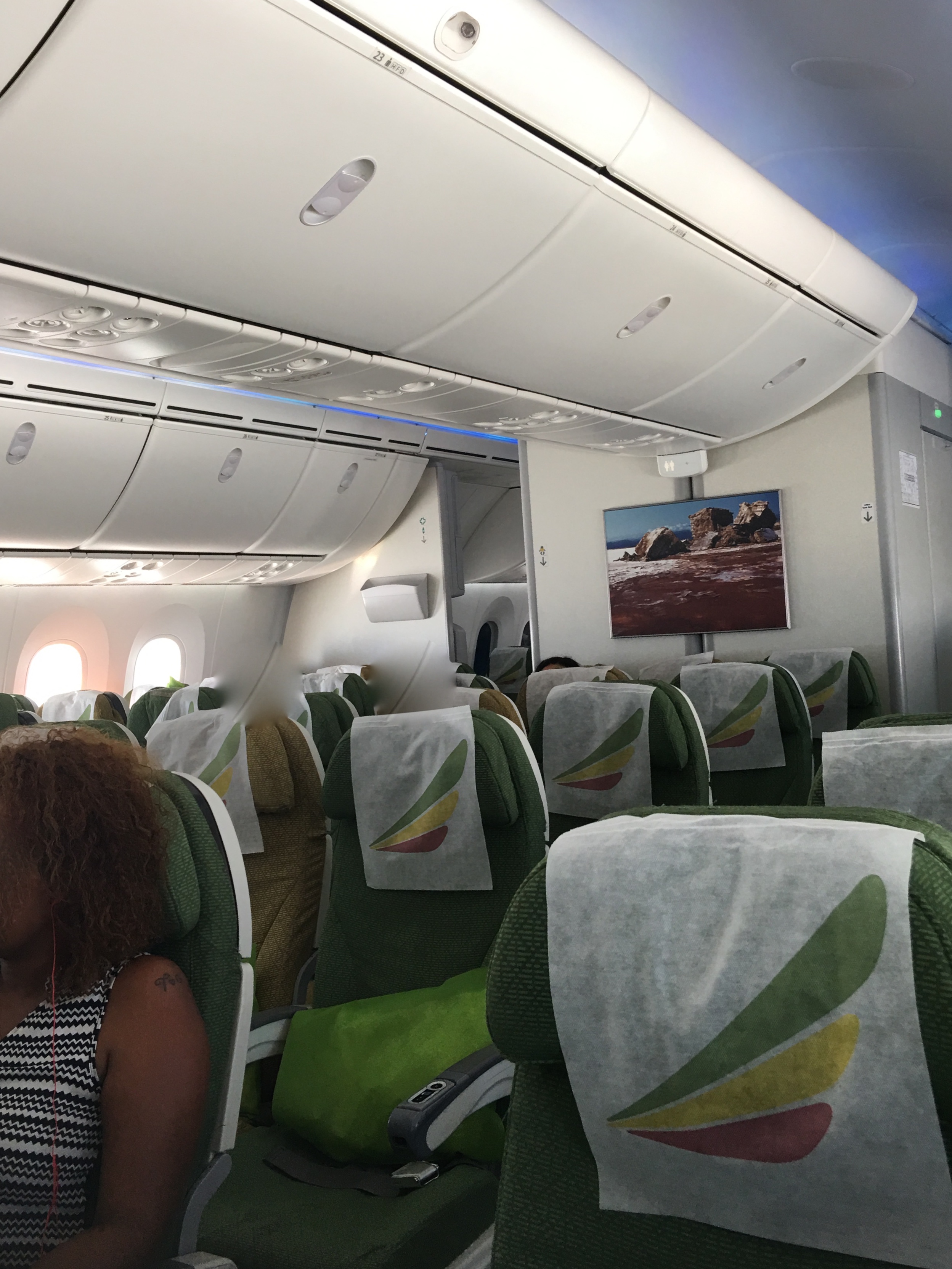 ©Exploramum and Explorason – Even paintings and works of art are hung!

There is something that is so unique among passengers traveling on this airline. I lay more reference to those exiting the continent to Asia and other parts of the world since I felt like they were very much African based on the way they dressed and acted. They had a piece of Africa with them that they desired to take away with them. Fortunately, they managed to take it with them since some had African sandals, backpacks, and even dresses.

I have to admit that they looked lovely in them. 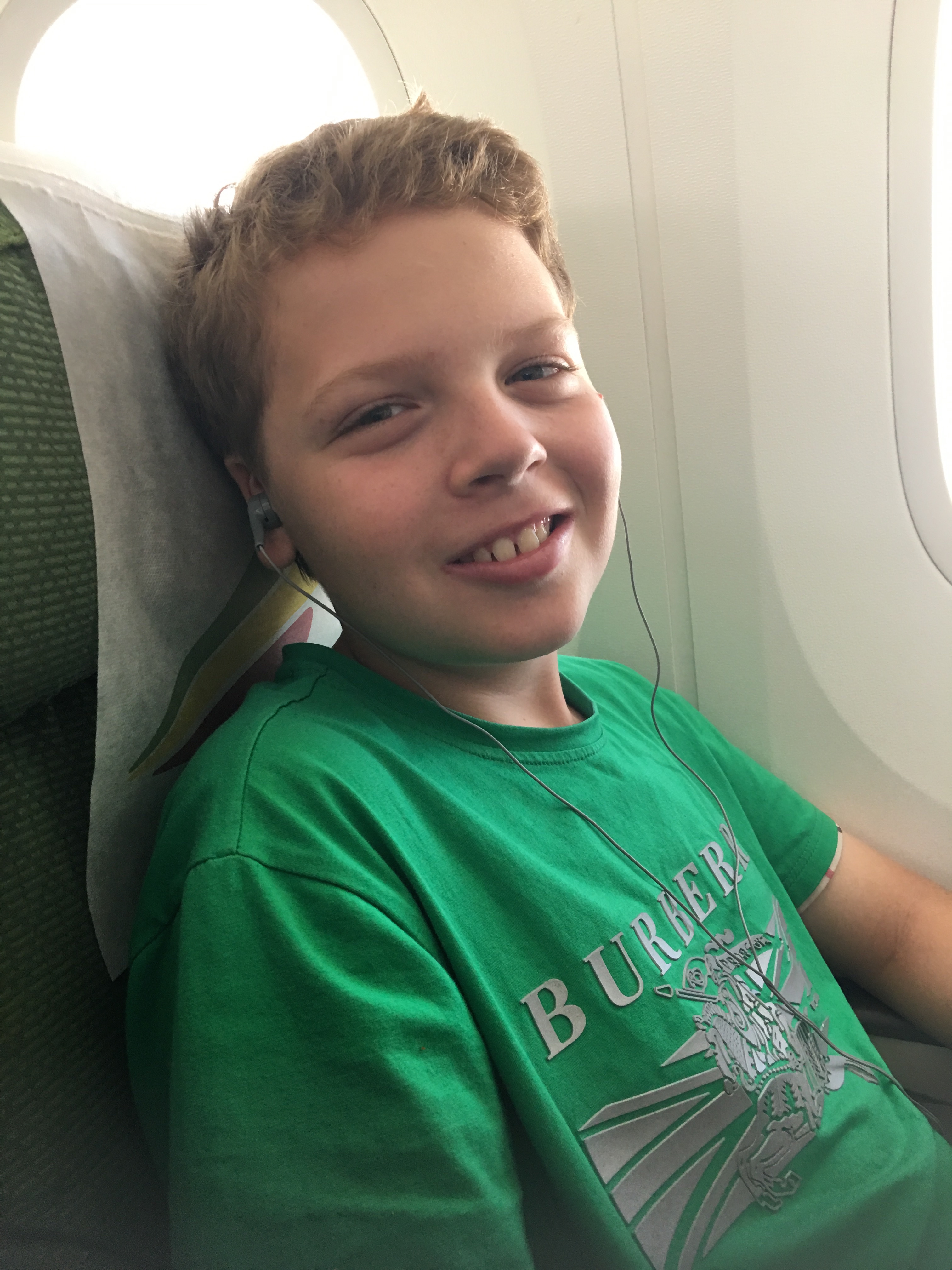 ©Exploramum and Explorason – relaxing with the in-flight entertainment

I bet someone might be wondering how an instruction from the cockpit makes an airline feel African?

I do understand since such concerns would never have escaped my mind if I was a first-time traveler. However, now that I have been a traveler for a better part of my adult life, I know that each instruction coming from any airline’s cockpit is always unique to that continent.

For instance, when traveling from Asia, you are more likely to hear an Asian accent and sound coming from the cockpit. This is the same thing you hear when traveling on an African airline. Of cos, there are few instances when you will notice that one of the captains is not from the continent associated with the airline.

However, most of the time, you will notice that the captain actually has roots in that continent like we noticed with our captain on Ethiopian Airlines that day.

This might sound silly, but I felt more like I was still in Africa as the instructions were relayed by a captain I knew had an African background and was, therefore, was very cautious in his speech, something that I felt defined who Africans were all about. 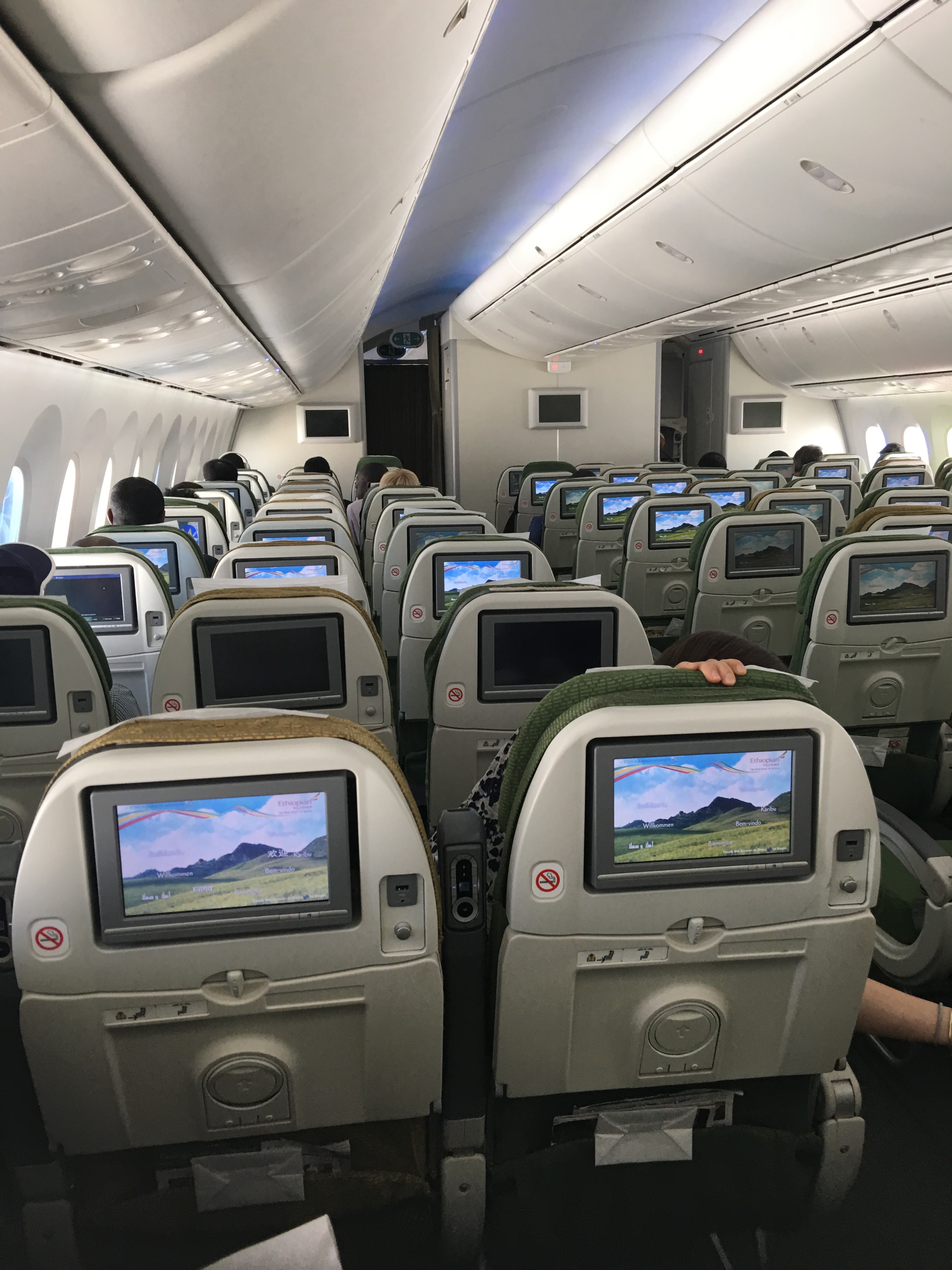 Professional Service – In the Air And On The Land

We arrived at Addis Ababa and discovered we could not exit to get our luggage.  So we organized at the Customer Service counter to have the bags checked through.  The airport staff was polite and thorough.

Alas, I was told when we arrived in Bangkok, Thailand that the next airline did not receive the bags in time.

I contacted Ethiopian Airlines Management and the professional service I received was amazing.  within minutes they had dispatched an email to another staff to check in on the problem and to assist me all they could, even when they were not the airline we had flown with next.  This made me realize that they cared about their customers which were a lot more than the mess we ended up with and the run around we received and are still receiving from the next airline.

Ethiopian Airlines – you have won us over with your service.  I can’t fault your service that we received 10/10.  Thanks so much. 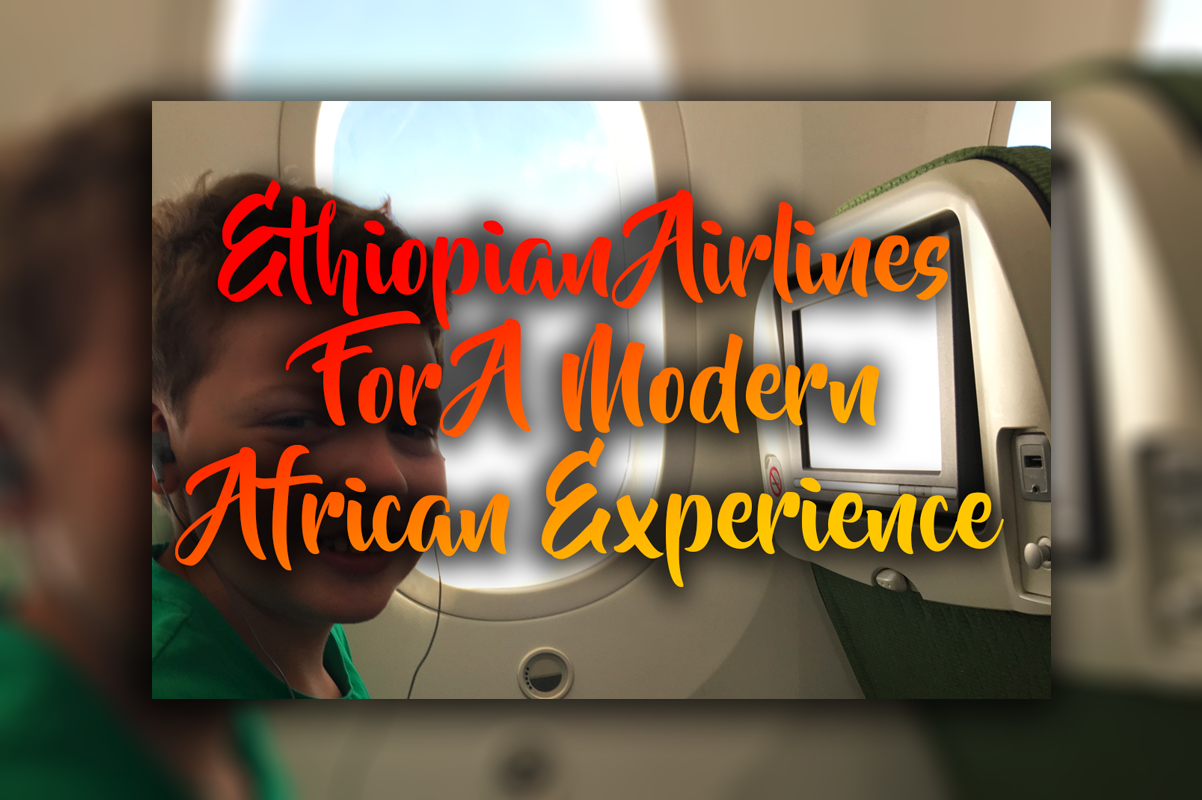 2 thoughts on “ETHIOPIAN AIRLINES for a modern African Experience”