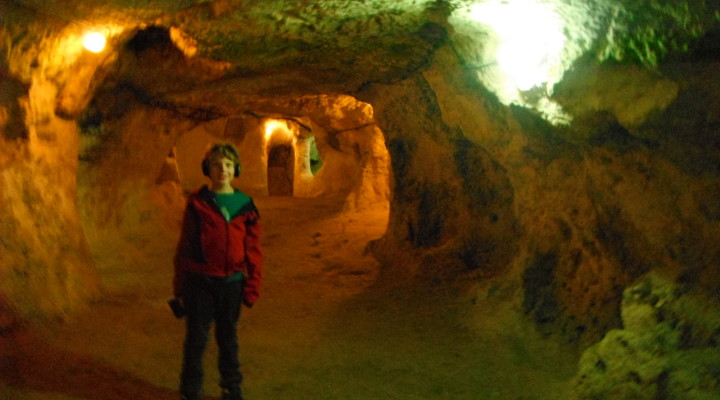 This is our first full day in this region of Cappadocia, and to my surprise, Explorason has been ‘YouTubeing’ some interesting places he wanted to visit in the world. This was one of them, and he really wanted to come here.

Each day we meet people and if I had $1 for every time I was asked how I educate Explorason, I’d be rich, but we use what is called world-schooling.  And this is an example today.

We don’t have any trouble finding it.  Mind you, we had a slight delay getting here – as we had to buy snow chains, new windscreen wipers suitable for snow, and some anti-freeze for the wiper water.  So with that sorted (the garage was right opposite the entrance), we parked the car and headed in.

We were side-tracked at an antique store – and I think the temptation was more the wonderful wood stove in the center – the store was underground, so we were targets for his marketing skills.  I end up buying a frame that he started the price at 80 TL and ended at 20 TL ($10) – not bad.  So we head on out in the cold to get the tickets to enter the underground city. 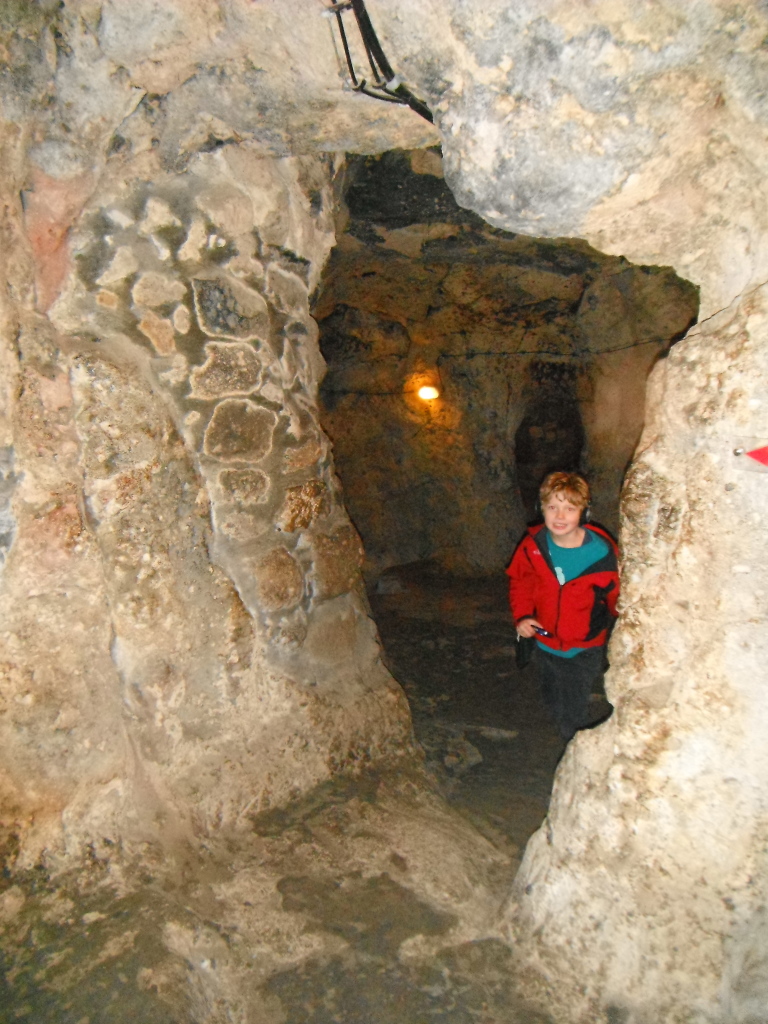 On getting down into the underground city, we discover we have left the cameras and iPhone in the car, so we have to find a guard to let us out and go and retrieve them. 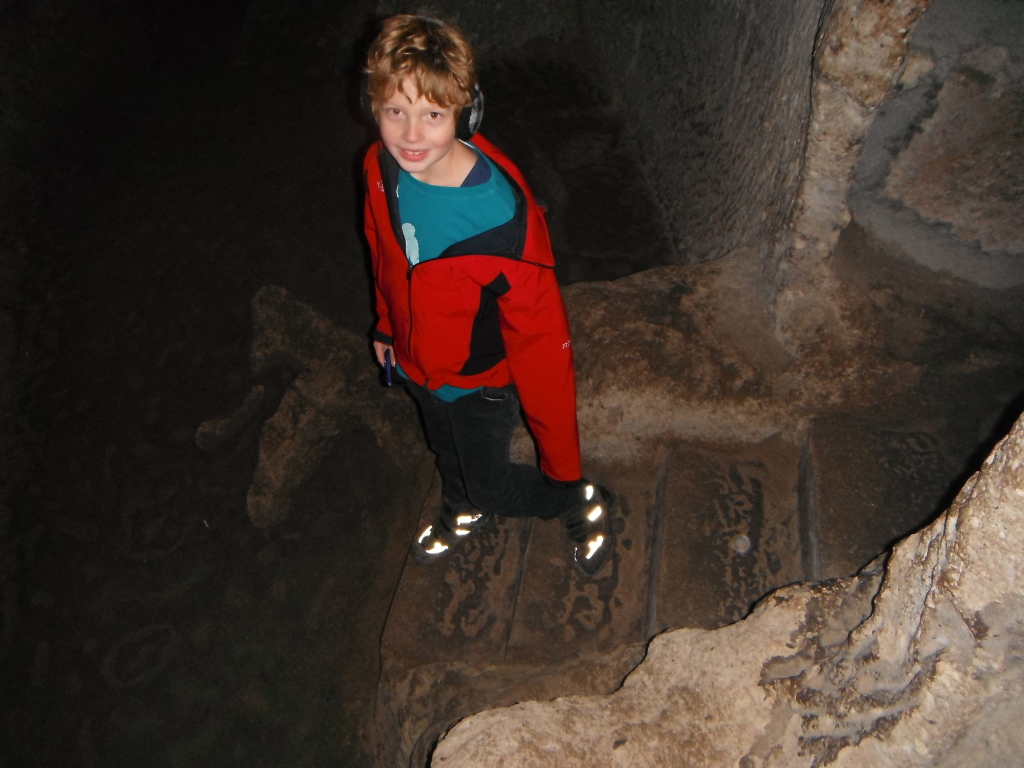 We explore the deepest underground city in the world!

This is what enticed Explorason to come here.

Extending to a depth of approximately 60 meters, and it goes down quite steeply in some parts.

Many of the corridors are quite narrow.  Others seem more like rooms. 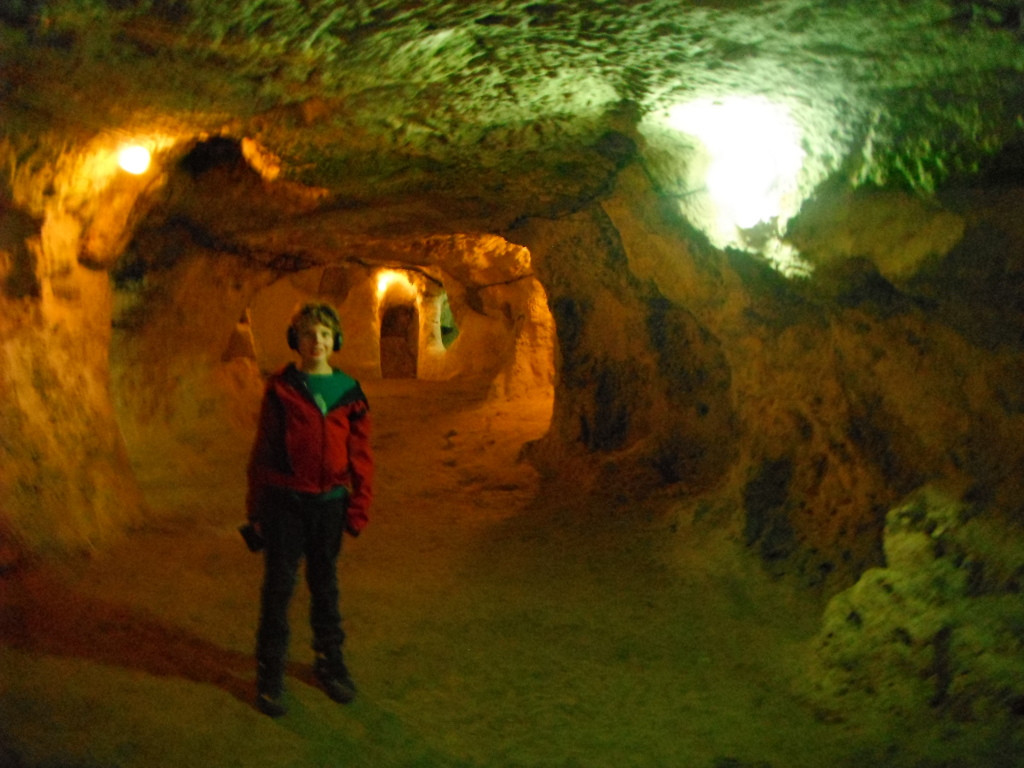 Right after this photo, I bang my head quite hard, and it really hurt. It was a ‘seeing stars’ moment.  Quite a few areas, especially going to where the graves/tombs were, are extremely low, and I find my back cramps up. 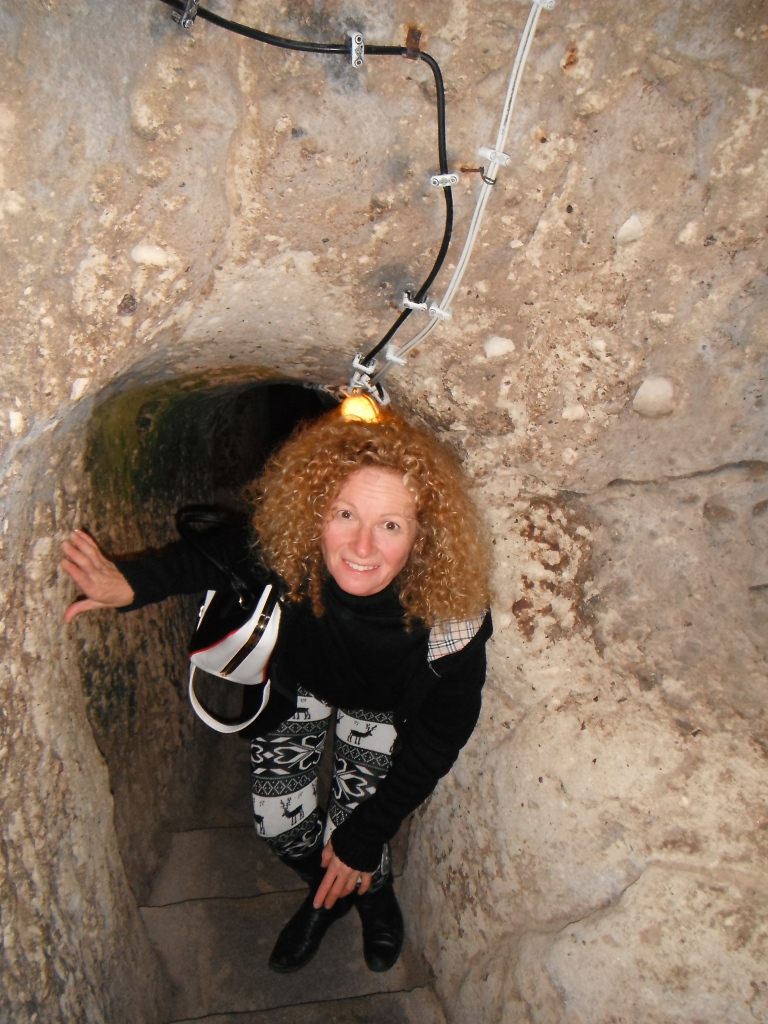 Exploramum and Explorason – Derinkuyu Underground City – I bang my head, and the tunnels are small in places

Now this area is interesting.  You have heard how the stone was rolled away on Easter Sunday morning for Jesus’ tomb grave, well this makes sense as to how it was rolled away. The stone fits in a groove, and there is an indented slot opposite.

Down here it was used to close off an alleyway. There is another at the front entrance. These were mainly when the Christians went down to hide, and they would roll the stone over for protection from the enemy. 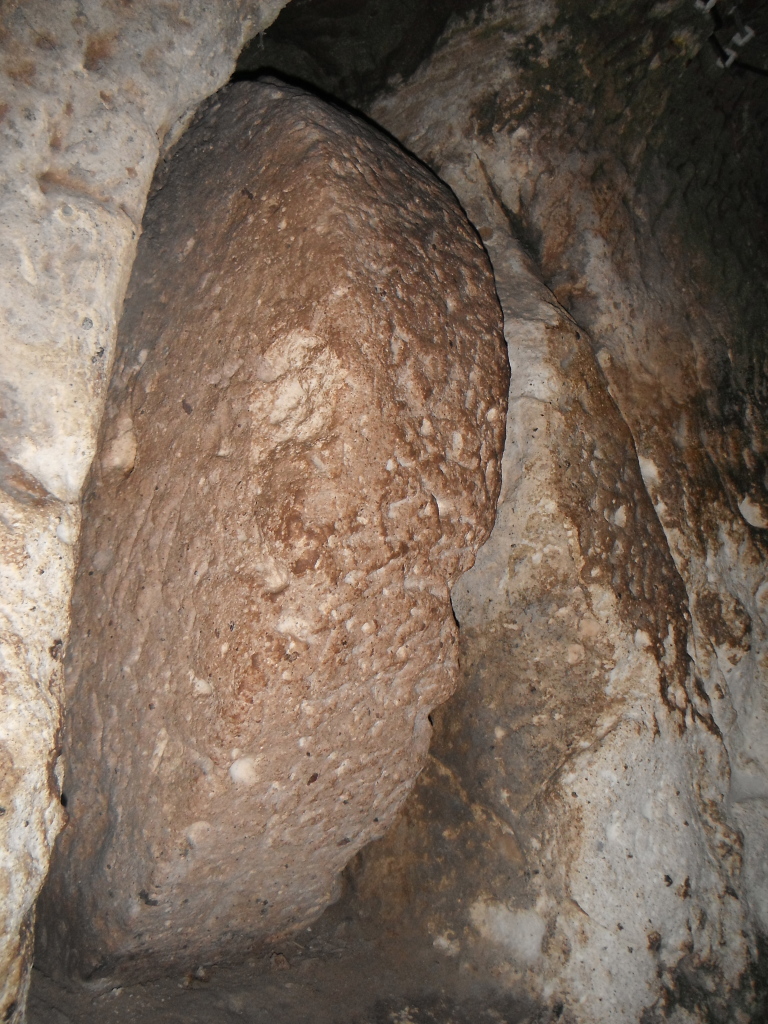 It was large enough to shelter approximately 20,000 people, but they say up to 100,000 may have been down here at one time.  These cities were also used when it became too hot, or too cold on land.

They also came down with their livestock, and the food they kept in the stores.

They say there were churches, tombs, stores and much more down here – it was a complete city.  We also saw a well, so they had access to water too. 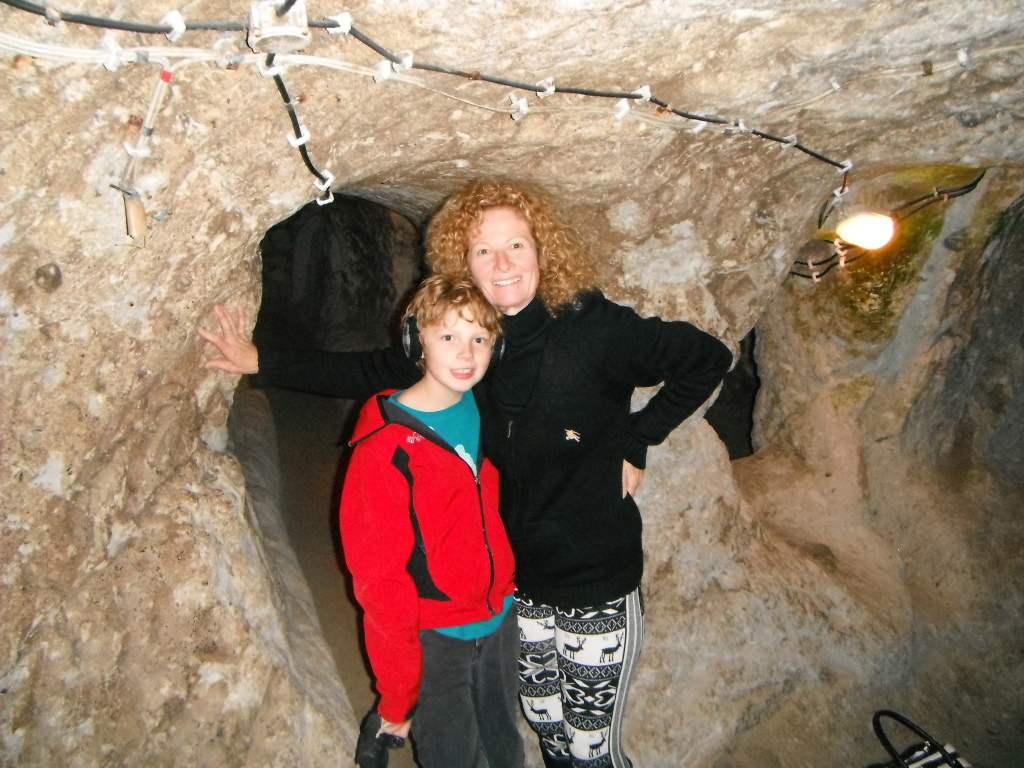 There are more than 100 underground settlements in the area.

Next, we leave and drive to why is the largest underground city in Turkey called Gaziemir. This was an area for the Hittites.  I love the way the bible and stories are all fitting together for us as we learn and travel.

There were Turkish Baths and this may have been one, with the drains for water, and the steps down. 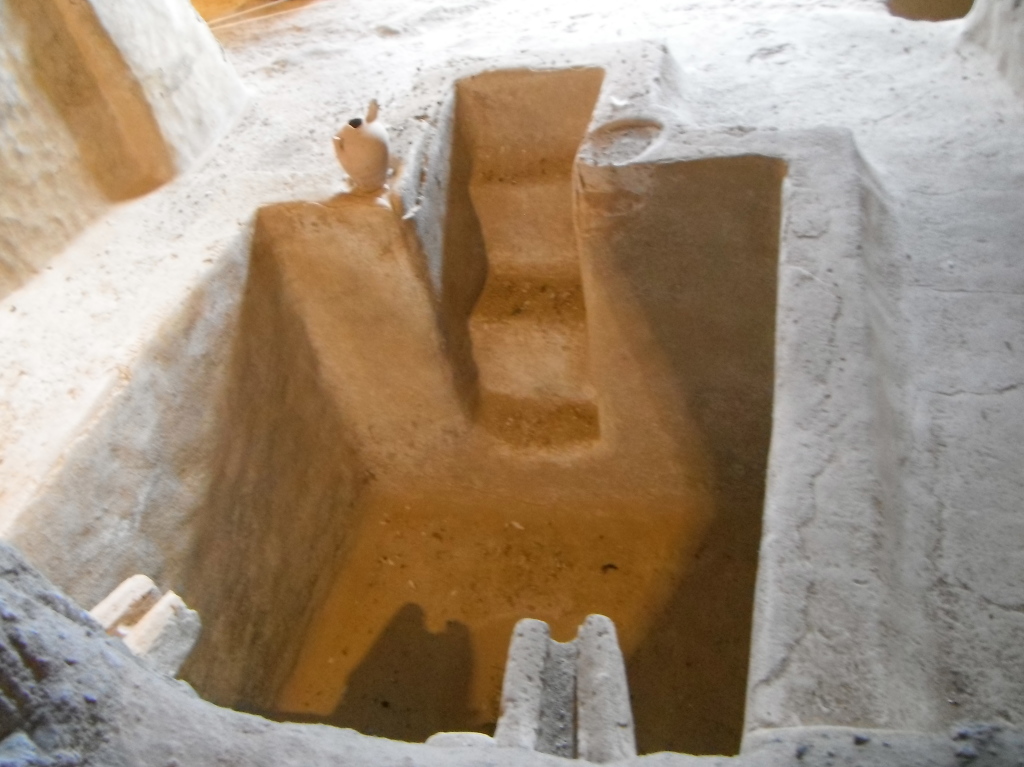 They say the city was used during the Byzantine period, and it had a winery – we see this to be true with huge sunken wine pots.

Tandoori fireplaces can be found. A lot of old pottery is also scattered around. 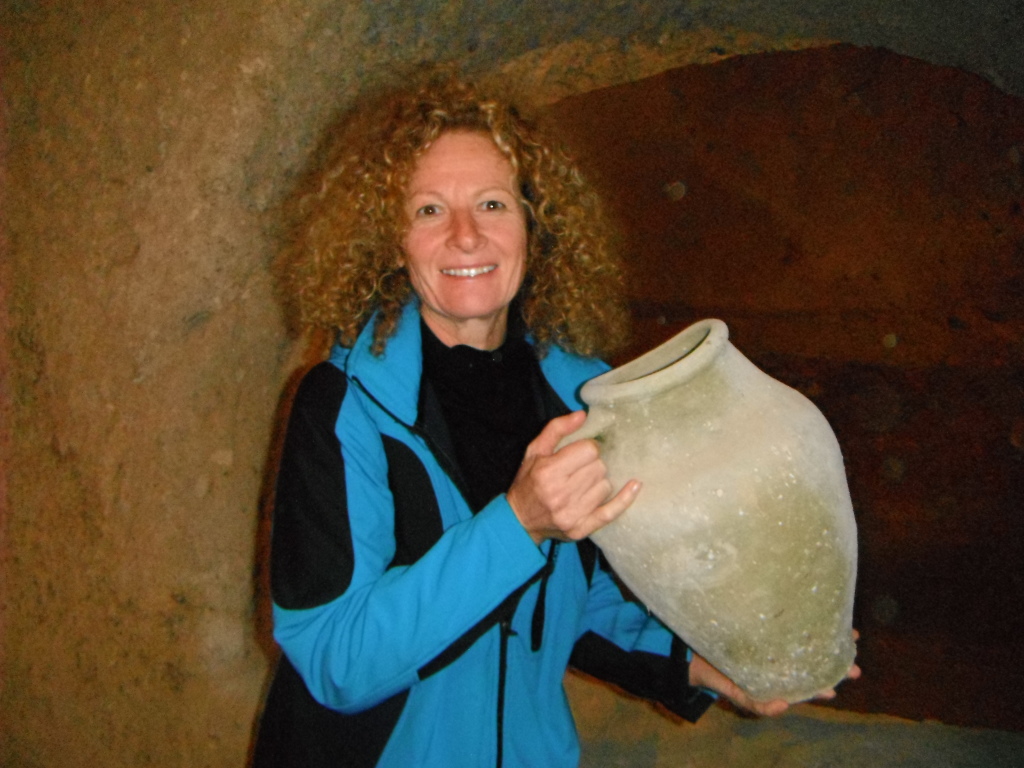 There are also chapels and look-out areas with steep steps to the surface.  In this particular city, you can see the food troughs ranging in size for all the animals.

In fact, this was the caravan route for trade, so there are areas of the underground cities wide enough for a camel to get through.

Below here is where the camels were kept. 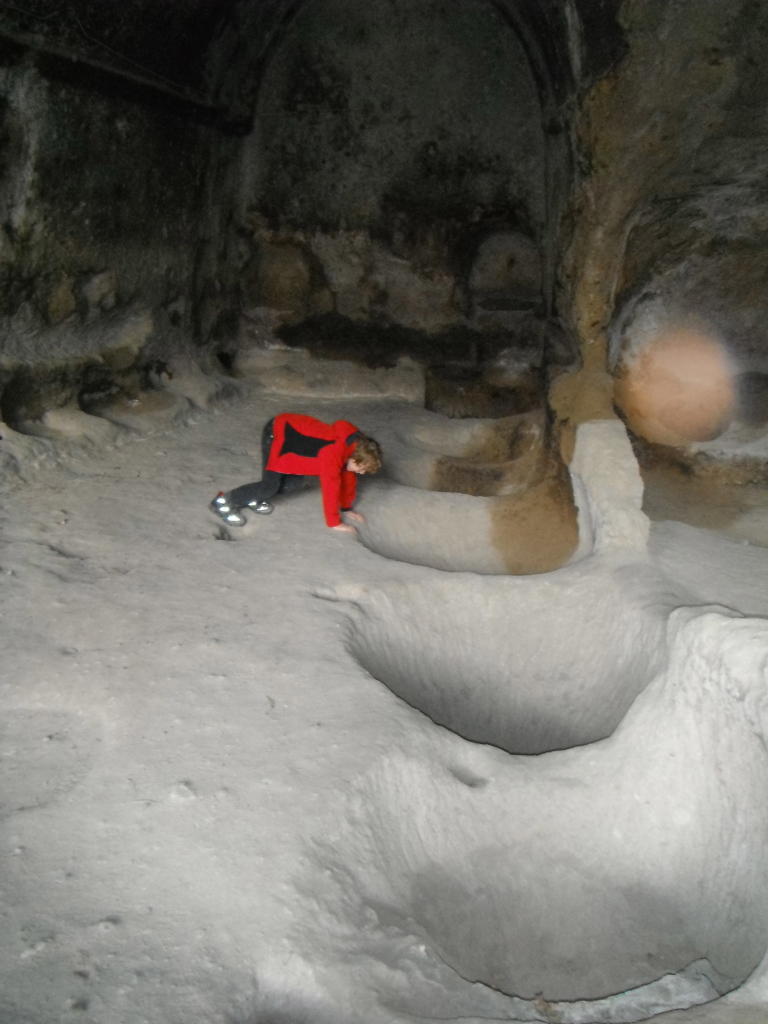 This particular city has been partly restored, but I liked it better as it was spread into several areas.

It was no-where near as busy as our first city we went to.

We really had a great time here Exploring, and there was so much to learn. 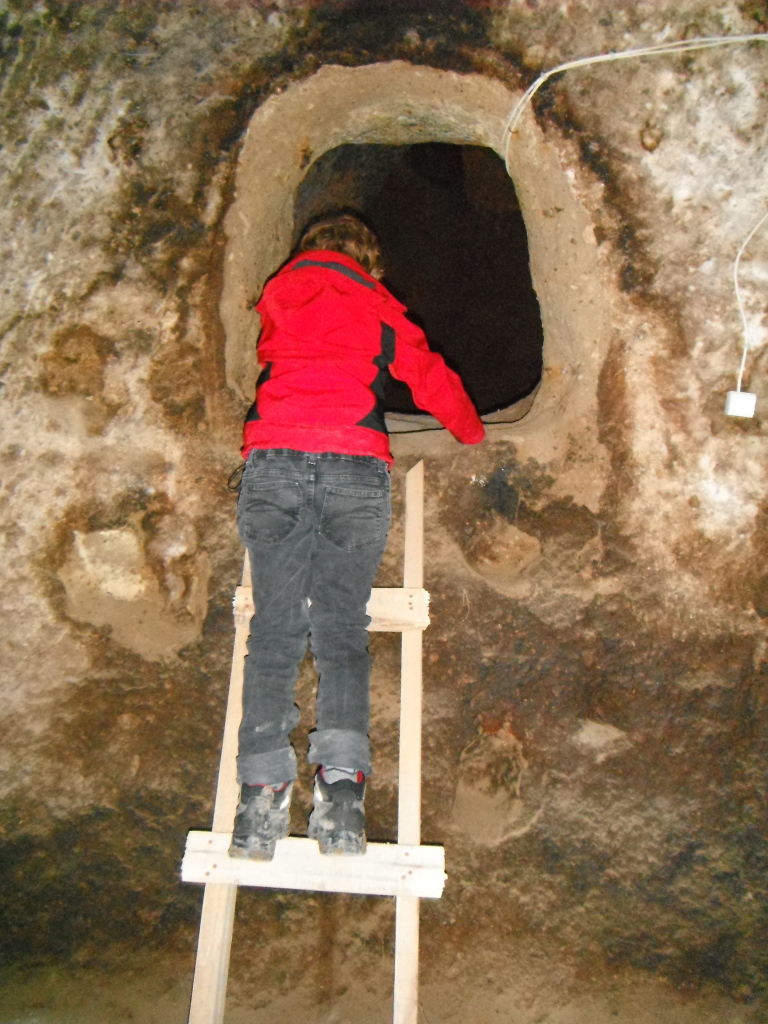 Exploramum and Explorason – Gaziemir Underground City – climbing up to explore