Vinales Cuba. Washed out at a Tobacco Farm

Being in Cuba at a peak period has its good and not so good points.

The good – it is a time where you get to meet many fellow travelers, and there is definitely a buzz about the place.  The cities and towns are alive.

The not so good – buses are full and need to be booked sometimes days in advance.  Casa Particulars listed in guidebooks are generally full, but in saying this, there are so many, there are always plenty of others to select from.

So we found ourselves booking our bus from Havana to Viñales about 4 days before we needed to travel in order to get a seat.  There are no reservations on seats – strictly first-come, or in our case, first collected (we had to walk to a nearby hotel) gets the preference of seats.  Toilets are nearly always locked on the buses, with the driver telling you they are broken.  Don’t believe it. Sometimes the doors are not locked and they are in ship-shape condition.  This can prove to be a necessity if you have a bladder problem like me. 2 hours between breaks and I can be in real trouble – these are the times it helps to have a child who needs a baño – unless they stop and offer him a tree!  However, they do select nice places to stop along the way, completely for the tourist – in our case with a band and a nice scenic pond in the rear.

The coffee comes with a sugar can wedge and you dip and such the coffee from the espresso – nice! 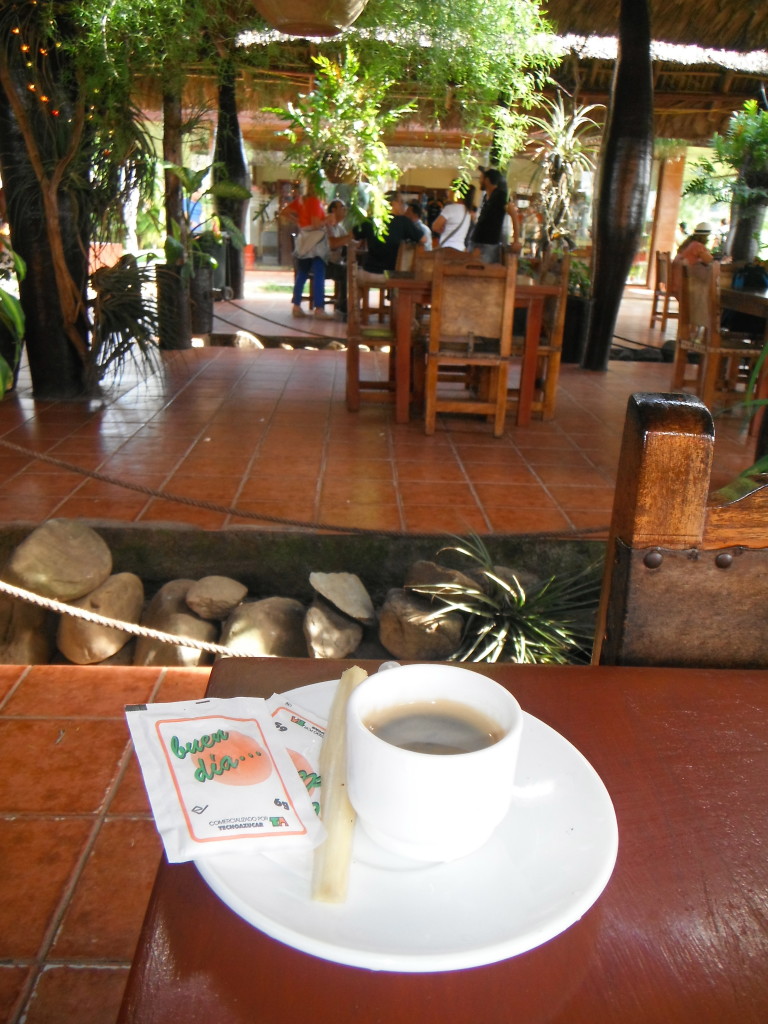 My sister and her husband had filled me in on where to sit – on the left of the bus behind the driver when heading into Viñales.  For most of the trip, I wondered why.

Then just as we head down into the valley the ‘Mogotes’ appear.  These are giant limestone mounds, and for the sight of them alone, the trip is worthwhile. 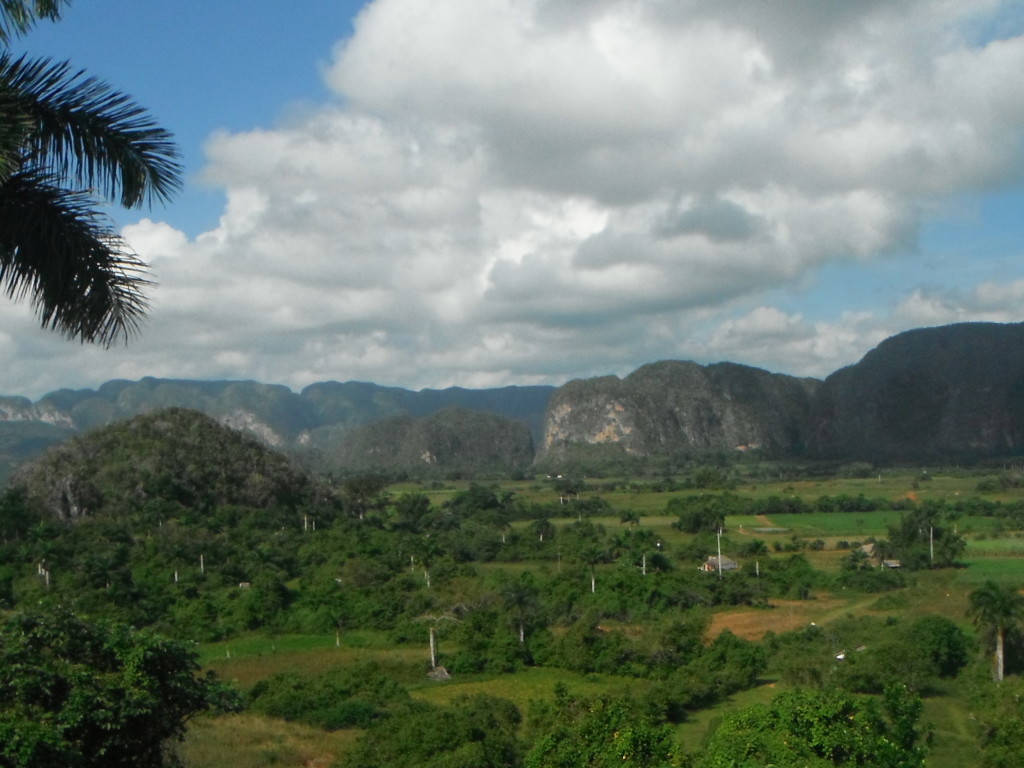 We arrive in Viñales, but the Casa Particular owner who is meant to collect us fails to appear.  Not a worry.  There are about 20 others swarming around, and so we finally pick one and negotiate the price down to 15 CUCs ( about 15 US$).  A man on a bike whizzes past delivering a pizza.  There is no box!

With having left our large bags in Havana, we only have 2 trolley backpacks and it is easy to walk the streets.  She offers to get a taxi to the casa and tells us it is with a mountain view and is quiet. 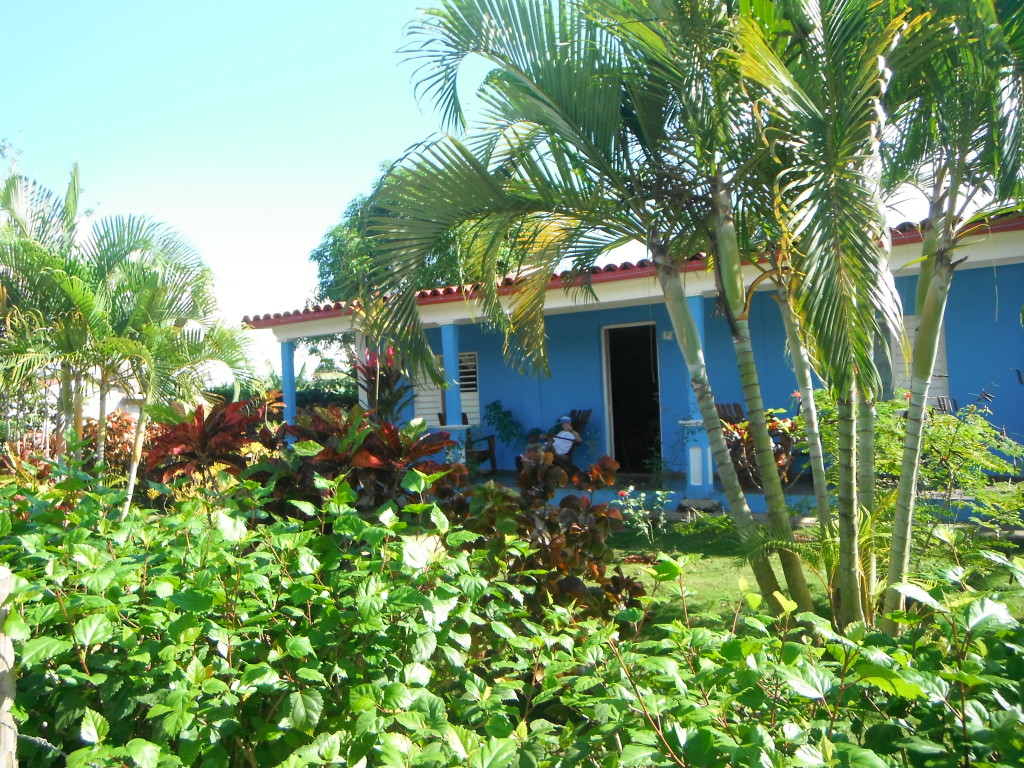 It turns out to be her auntie’s home, and we are right at the wrong edge of the town, but it seems quiet and the town is so small, it really doesn’t matter.  Well, not counting roosters, this was pretty true!

We wandered back to town and had a look around.  The town itself really doesn’t have much to see, and I was eager to go out and explore, but I have found it works better for my son if we go out exploring the day after we arrive.  So we located a few nice restaurants we would go back to try for dinner and wandered back to our very blue room at the casa, and relaxed with a drink on the porch.

We had a wonderful dinner at a historic home, and the prices were great.  However, their mathematics was not so good and realized later I had been completely overcharged.  However, I do not think it was a genuine error, but yet again another way they can glean an extra five CUC; and either way, we had a good time.  It is a pretty safe town to wander around at night in, but we did miss our street and get a little lost.

We had booked (with our Casa Particular for $30 for 2 people) for 4 hours of horse-riding through the tobacco and coffee fields, and visiting a remote village, and ending up to swim in a cave.

However not long after we took off on foot through the town, and down past the start of the farms to get the horses, the rain came bucketing down.  And I mean bucketing.  We took shelter for an hour under a veranda and chatted to a very lovely traveler, and then she took off on her bike, and we decided to take off on the horses.  Silly us.

The rain started coming down and stung us with needle sharpness.  The horses barely could walk in the torrents of water, and the path as slippery.  My son was on his own horse, and not being led, so I was constantly looking around to ensure he was OK.

Finally, I asked if we could take shelter at one of the farms.  We had barely started the journey and it was proving pretty hopeless.  After another good half an hour I asked if we could turn back and take a retreat at a tobacco farm.  This next part of our journey was the worst.  By now we were soaked, the camera was starting to fog up, and we were cold to the bone.

To our left a tiny break in the shrubbery unfolded itself, to show a small path.  Bushes scraped against our legs as we rode the last distance.  As soon as we arrived, the rain slightly subsided – why am I not surprised? 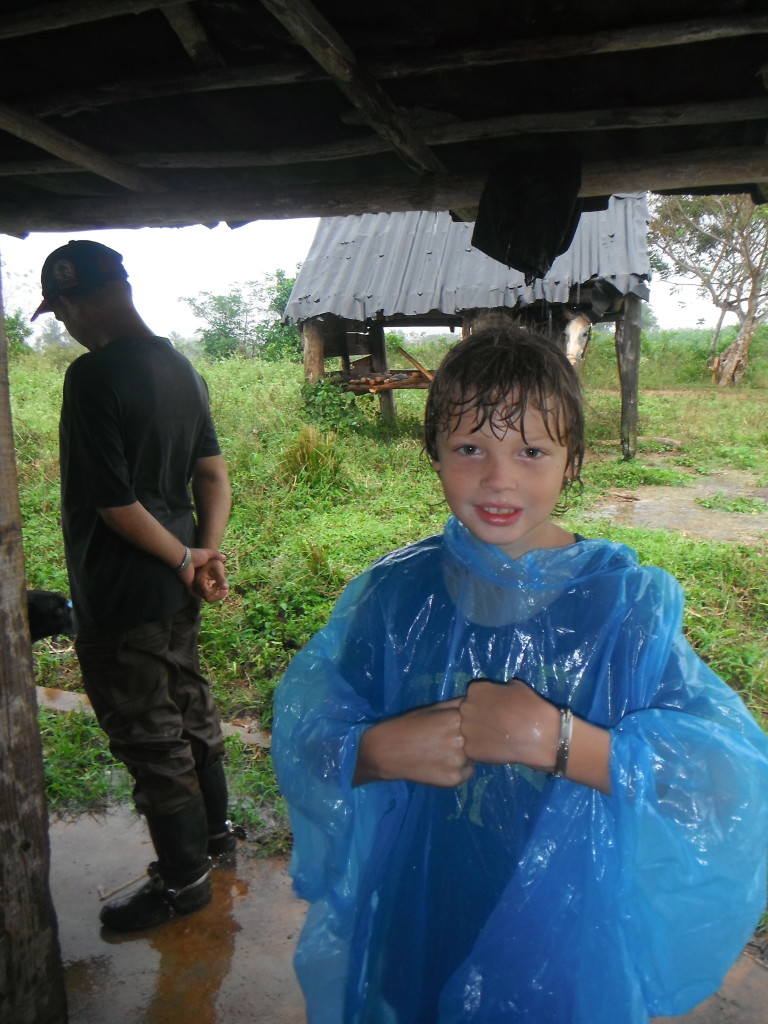 My son stripped off, and his clothes were rung out.  We were offered Havana Club rum for me, and a fresh pineapple juice for my son.  The owners were just lovely.

They took the time to explain the cigar process to us, and it was a hands-on educational lesson, showing us everything from the seed pods to the cutting and rolling of the cigars. 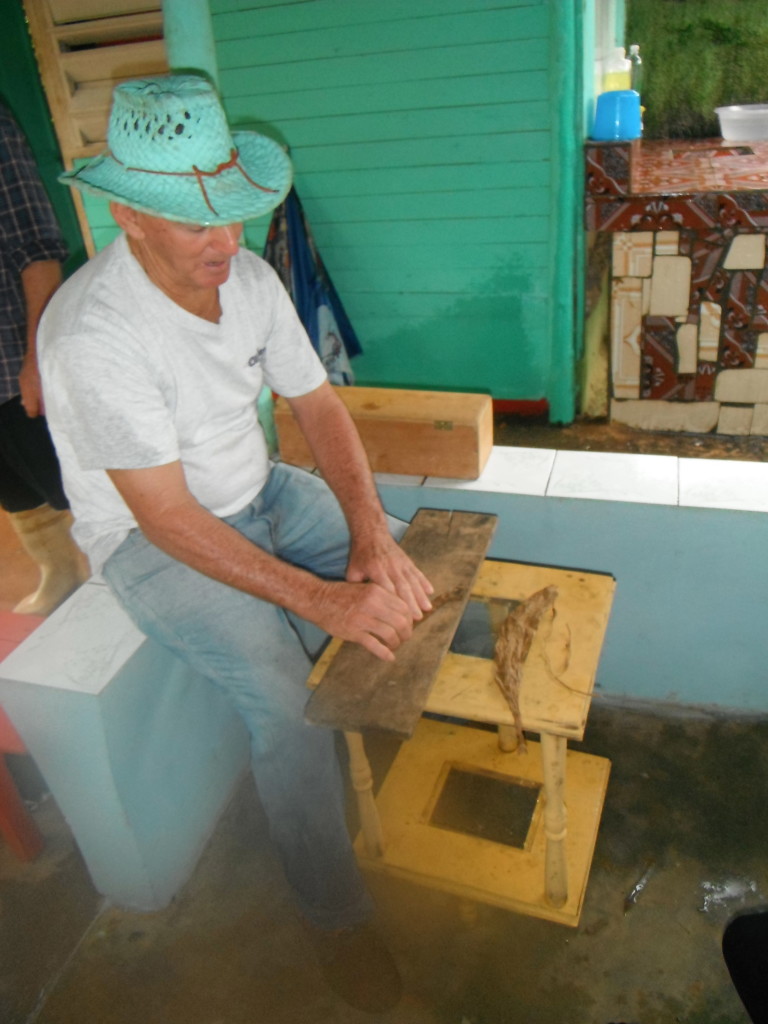 He made two, and then offered me one to try!  Well, I am not a smoker. Never have been, but we were informed that most of the nicotine is near the veins of the leaves which are cut away, and also in the base leaves of the plant, that they use for cigarettes.  I had a couple of puffs.  We took a few fun photographs.  Then Explorason pretended to be a Cuban cowboy with his hat and cigar – mind you there was definitely no inhaling!

Next came the coffee farming, and a lesson on the color of the beans and a bit of fun shooting out coffee beans from the pods at each other. Their white gel-like substance makes for good cannon shots, and we all had a bit of fun pinging them at each other. 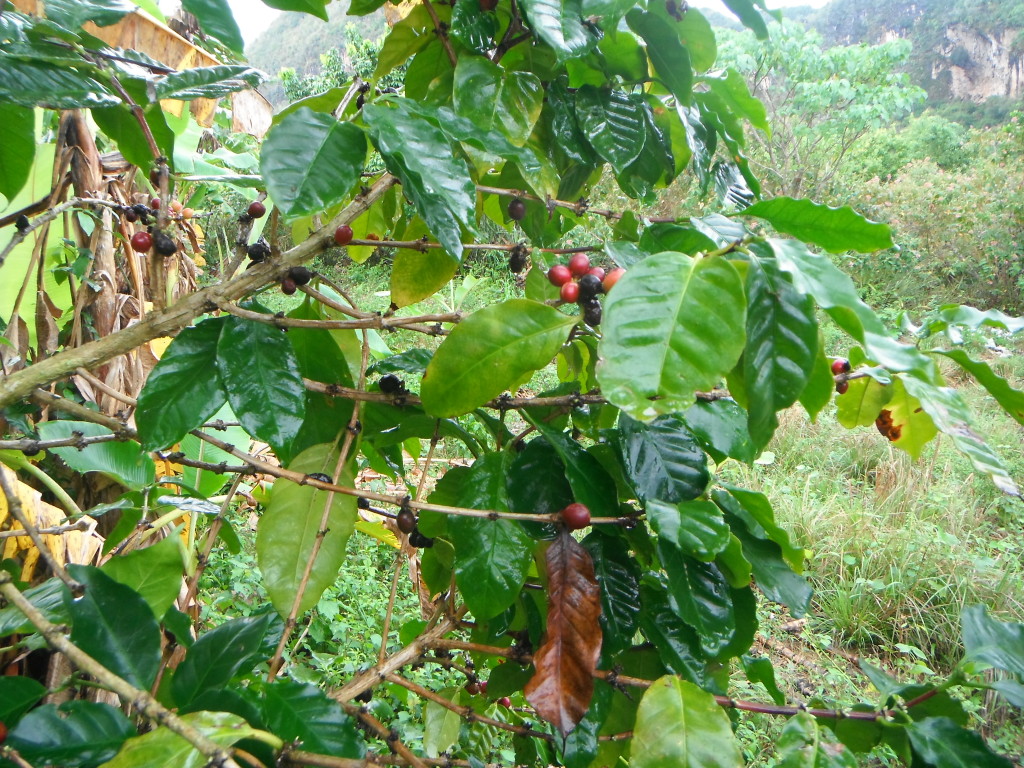 We were offered homegrown coffee for sale, but as it was not ground, I thought I would get out of the overpriced purchase.  But not to be so.  They led us to the lower farmhouses.

Here an old couple sat in a meticulously clean casa.  Their pots and pans were scrubbed to perfection – I was very impressed.

Explorason and the farm set to grinding the coffee – oh the aroma was incredible!   To me, this 15 minutes of traditional Cuban life was probably the highlight of our day.  This Finca was spotless, and the people were so happy and kind.

Somehow we were talked into buying some of their cigars.  I figured that 12 Cuban cigars for $20 were probably a good gift for someone along the way.

After viewing the tobacco drying houses, and saying goodbye, we rode back to town.  So much for our half a day of horse riding in the Cuban countryside!

We wandered back into town.  Finding the slowest restaurant in history, we sat and lunched and spoke with other travelers also waiting for their basic lunches.  We then went to the bus agency and discovered we were able to share a taxi back to Havana next day with some others for not much more than a bus ticket, and for way less time.

So with that sorted, we decided to go and visit the renown limestone caves.  We found a local car (taxi) and negotiated the price for that and a visit to the rock mural I had heard about.

The caves are not far out of town, and on arriving we just made it in front of a coach load of tourists.  For only a few CUC I bought a ticket (children are free) and we found a path down through the gardens to the start of the limestone caves.

These were pretty cool, but it seemed in no time we came to a line-up? 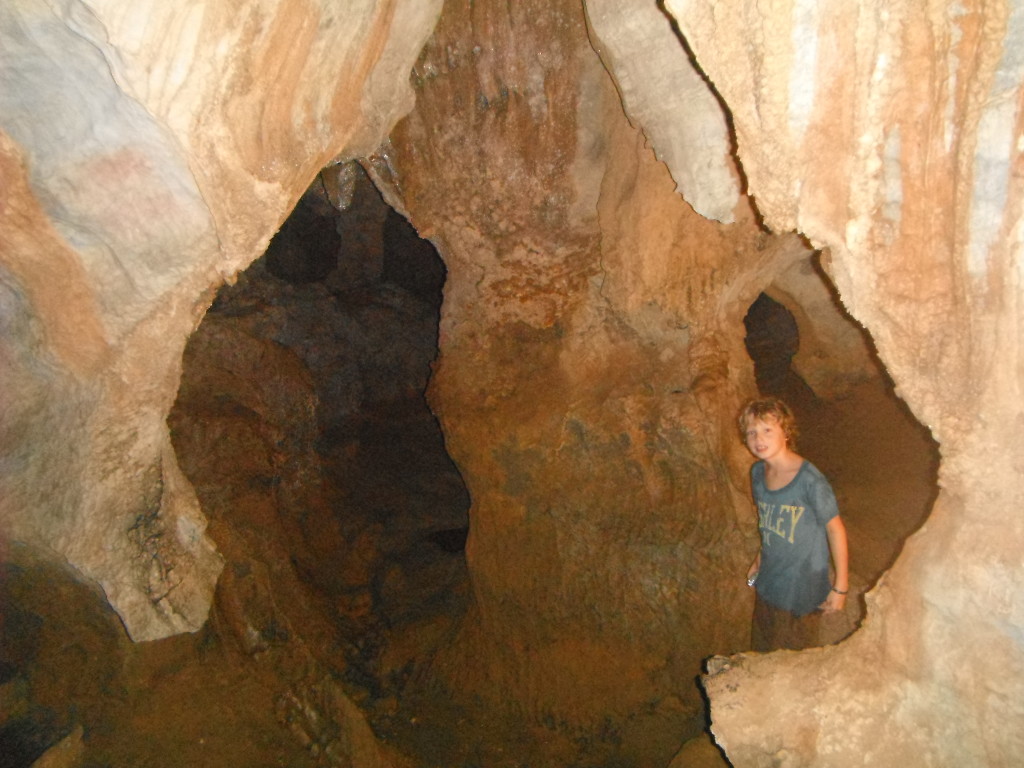 We waited about 1 hour to get on a small boat around the caves, going along an internal river.

It was really great, and with the guide speaking Spanish and English, we were pointed out several clear shapes in the limestone formation.

A bowl is passed around to tip the guide.  I am finding that tipping is pretty customary in Cuba, and seeing their wages are so low (10 – 20 CUC a month), this makes the world of difference to them.

Once finished here, the driver waited for us at the small waterfall edge.  We needed a bathroom and discovered a lovely restaurant set away in the end.  Seeing we had a taxi, we didn’t stop, but it was a great garden setting.

We picked up another couple of tourists and dropped them back into town.  Passing about 5 km on the other side we finally come to a huge painting on a rock wall, depicting a pre-historical time. Great education!

This painting was inspired in the 1950’s, and the artist arranged for 20 workers to hang from the rock ledge, as he guided them from the ground with his vision.  This is made up of horizontal lines and really is pretty cool.

There is a small entry fee, but it is worth seeing up close, and it also enables them to restore the artwork, as they are currently doing. 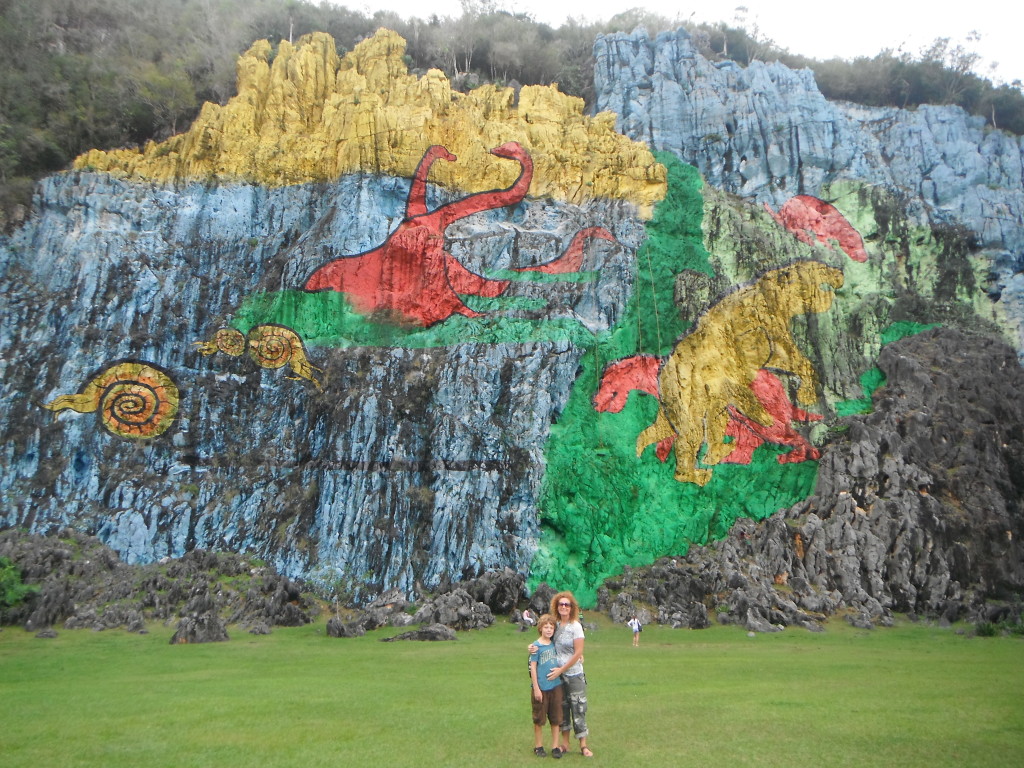 As we went to leave, we were greeted by a local, who was taking his bullock ‘home’ to the farm.  This was just fabulous when he invited Explorason to have a ride.  He led him around the field and then we gave him a tip and went to leave.  What happened next was amazing.  He had trained the bullock to sit, lie, and cuddle him.  He treated him like his pet.  It was great!

It was a great end to the day.  Viñales is a gorgeous area. It is well worth a 2-day visit, and we are really glad my sister and my brother-in-law encouraged us to go, or we would have missed some stunning sights.