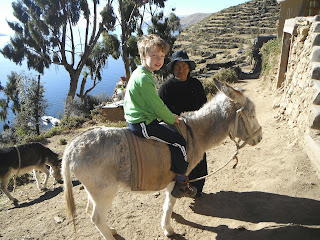 Today we were meant to go to Isla del Sol on the 8:30 a.m. boat, but we had a late dinner and slept in.
So we took the 1:30 p.m. boat.
This was great as we had met two Australians, and they were the same as us, so we were able to chat with this couple on the way there.
We started out on the top of the boat.
The guy started handing out life jackets.
I was surprised he didn’t give my son one, so a kind girl offered him one.
There weren’t enough life jackets to go around though.
Within minutes it was freezing.
So we headed downstairs – where our friends were.
There was a family in the seat in front, and soon the two boys were talking and playing together – mind you, he was German. 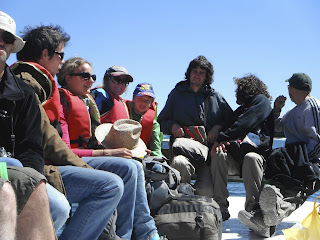 As we approached Isla del Sol, I was amazed to see the snow capped mountains in the distance.
Along with a traditional boat, this was great.
When we arrived I wanted to go on board the reed boat, but my son wasn’t interested – drat. 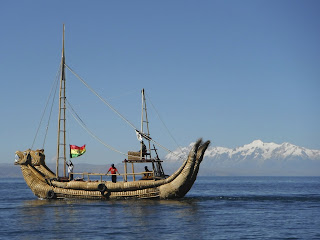 We huffed and puffed up the rocky stairs trying to find accommodation.
We tried about 10 places, and we even tried to rope a single girl in with us.
The trouble was there were triple rooms; rooms with no bathrooms; and everything but what we needed. 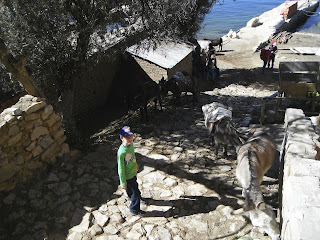 Eventually about 1/2 way up the hill to town, we found these huts.
Tiny with a double bed and an indoor bathroom – yeah!
95 Bolivianos with breakfast was a good deal.  It was called Palacio Hostel Isla del Sol.
It soon became cold, and as there were no lights, we grabbed a flashlight and headed out for dinner. 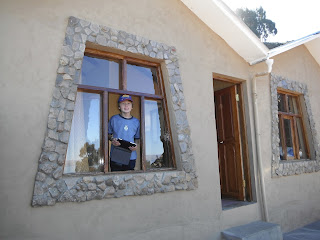 Many donkeys laden with bags of cement or dirt wandered up the hill.
You had to get out of their way.
They were not about to get out of my way I quickly learned! 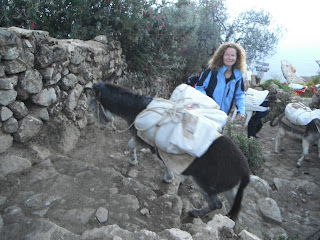 We selected a restaurant overlooking the wharf.
It was safe, and my son would run up and down from the wharf to the table. 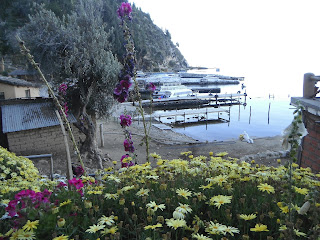 We then met up again with our Australian friends.
So we decided it was “wine o’clock”.
And time for a pizza.
Soon I was wishing I had bought a beanie and gloves – it was freezing!.
We did, however, bring our tiny hot water bottle, so the kind lady at the restaurant filled it for us for free. 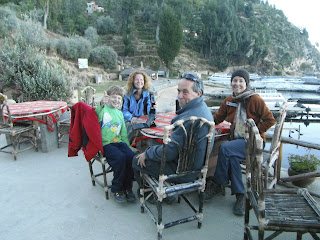 We headed back to the bedroom.
Soon we were tucked in bed with all our clothes on.
We played a few games and had an early night.
It was a full moon, and to see the pink of the mountains and the moon in the sky outside our window was a million dollar view.

Next morning we were given breakfast in the “museum”.
I was impressed at the array of old pots and antique finds on display.
My son enjoyed the reed seat and other items while we waited to be served. 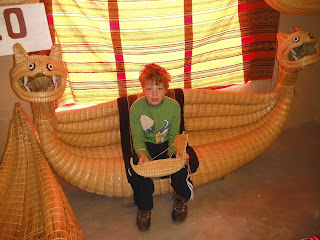 Now I was pretty impressed with how nice these Islanders were.
Friendly and welcoming to tourists.
It was no trouble for the owner to go and get a rug, and have my son on the donkey.
She had the loveliest long hair and came with pompom hair ties that were woven for me to buy.
I haven’t seen these for sale in the general tourist markets, and they have a bit of a memory, so at $3 I snapped them up.
They will hopefully become curtain ties or hang off the hammock we have bought.

By 8 a.m. the sun was warm, and we were hot as we started our hike to the north of the island.
Now if you are reading this, wanting to go to Isla del Sol, don’t do what we did.
Get the boat to the south.  It is downhill not uphill.
We were exhausted! 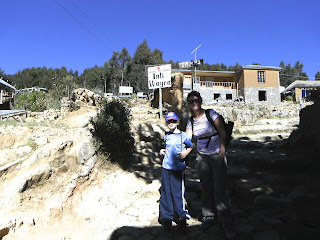 We had a stop right at the top of the island.
You could see both sides.
We picked a nice place for Coca tea and Cocoa for my son.
All around was the lake.
I love the traditional sugar pot.
The lady said I could buy it, and I kick myself for not doing so. 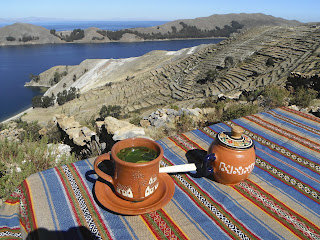 We got to the very top of the island and placed a stone on the tower.
We then discovered the path ended.
We were lost.
We had nearly 2.5 hours to go, and the boat went by 1 p.m.
We were not going to make it.
Several others joined us.
There are no signs.
We all missed the main path.
So we headed back south again – I am still very upset at missing the north with the ruins.
I now want to go back and do it all again !! 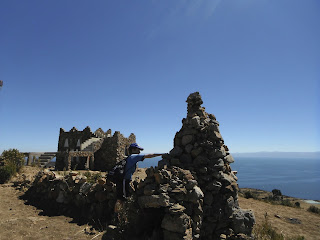 So we wandered back a little more slowly – down the hill.
Next thing a lady comes along with 2 llamas – out of her property.
She wants to show me her wares, so she hands the reigns of the llamas to my son.
Off she goes and brings out all these lovely tablecloths.
Alas, none of her clothes was the size I wanted, so 15 minutes later, she retrieves her llamas from my son – who has been wandering up and down the lane. 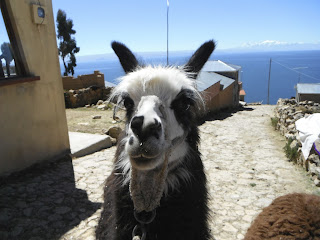 We head back and have a lovely long lunch in one of the cafes overlooking the wharf.
I then get the bug that I “need” a tablecloth.
Why I have no idea!
So I manage to find an amazing one – finely woven and beautiful colors – and big.
We negotiate price, but then when I try to get an extra 10 B off and go back, he then hikes the price way up again.
So we call his wife, and she agrees to the low price she had originally set.
I am now really pleased I bought my cloth.
It was the shop in the distance (very unhappy man owner). 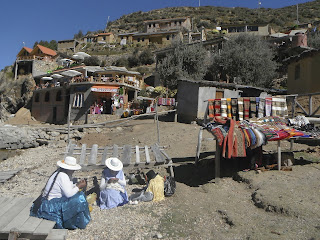 We wait around for the boat back.
The local ladies sit and knit.
Life is slow and happy on Isla del Sol.
I also found out a boat leaves at 10 a.m. to Isla del Luna and this is a great trip.
Now I really feel I have to go back and do it all over again.
Also, this is an inexpensive day.
Accommodation, boat ride, dinner, and wine came to just over $40 AU – bargain.

We recommend Paradiso Isla del Sol Hostal.  They have several huts, some with indoor private bathrooms.  This includes towels, hot showers, toilet paper, and breakfast.  Not to mention the million dollar view of the lake, and of course the friendly family who looked after us so well.