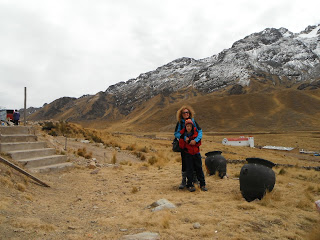 Three days ago we booked tickets on a tour which was to take us from Puno to Cuzco, and with us seeing some wonderful attractions on the way.
We were up at 5 a.m. and at the terminal at 6:30 a.m.
We had booked front seats, but when we got there Inka Express refused to give us what we had been promised.  We had seats 27-28.
We also discovered we had no entry fee included in the ticket, and we had paid top $$.
This annoyed me.
I raced around and found the guy who sold me the tickets.
I did a bit of ranting and raving, and he was great.
He went to the staff and got us the correct seats.
Finally, we left Puno at 7 a.m.
It was a lovely, and cold bus!
Our first stop was Pucara.
I learned a lot.
The museum and historic church.
We learned that 90% of the houses are not finished, and this is to avoid tax.
When a house is finished, they place bulls on the roof. 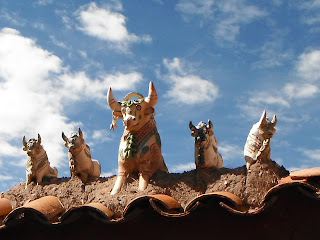 My son saw this as an educational day.
Here he is looking through a magnifying glass at a tiny carved Inca skull stone. 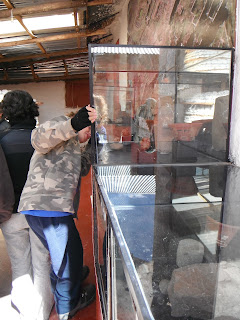 The wonderful thing that was also there was the Vicuña enclosure, and my son was able to feed them.
One jumped up – he really liked him. 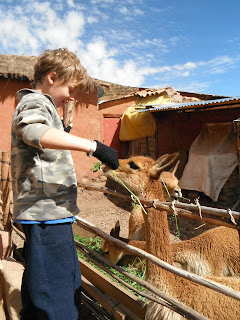 The old church was great, and opposite this was a small market – with good prices. 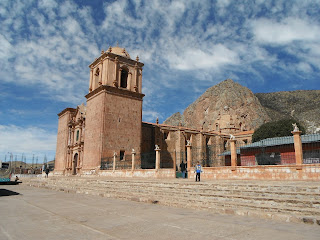 Next stop was La Raya.
This was a top point where two mountain areas met at the Andes.
It was super touristy.
They were there for the money, and the products were triple the price.
We paid to have my son hold this lamb, but at the same time, it was lovely. 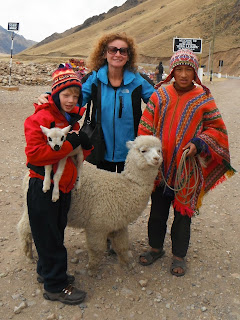 He has such a love for animals, and I adore this photograph. 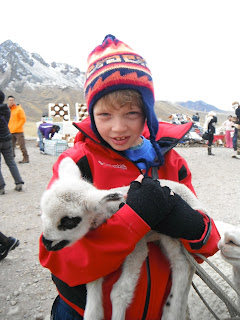 The snow-capped mountains were pretty awesome in the background.

Sicuani was the stop for our buffet lunch.
This was a lovely restaurant, but it was very “touristy” and there was a market area at the back.
I loved this hat – should have bought it! 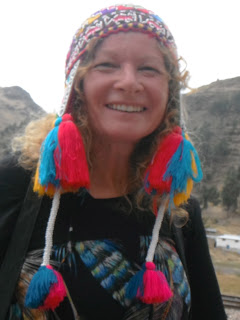 At the back was an old railway station where the main train passes through.
Opposite were a couple of bulls – thankfully tie up.
Then there were the sheep with their lambs.
Some were, and some weren’t tie up.
My son ADORED them.
He petted and had them lick his hands.
After 1/2 hour we left, but he wanted to go back again. 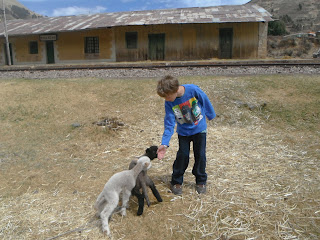 We then went to the market area.
This is not a good shot, but there are the traditional hats they wear in this region. 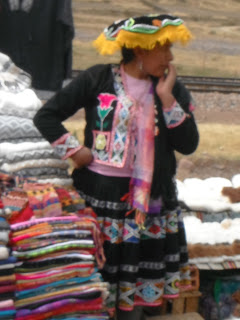 We then stopped at Raqchi.
This is an Inca village.
There also stands a church, but the tour was running a bit late so we went directly to the church. 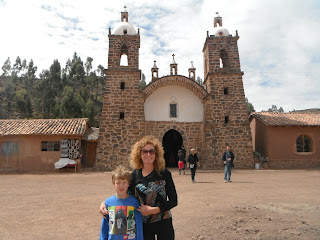 The temple was quite interesting.
We learned there were 7 columns.
The number 7 represents the 7 colors of the rainbow. 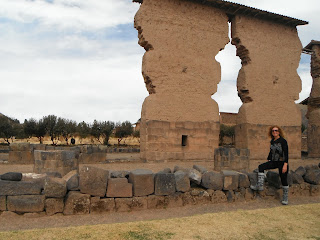 My son decided it was run and climb time, and so where the houses were, he enjoyed it like a maze area. 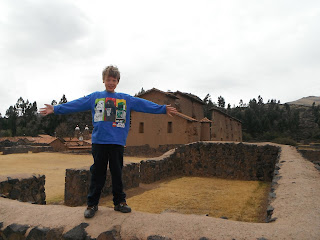 Then if you see the round thatched roof.
This area was used to store the grain.
260 round storage areas. It is well set out. 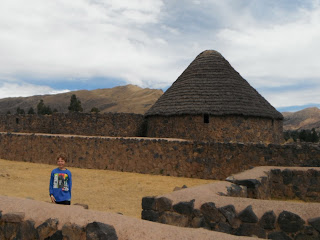 There was another housing area.
The man with the corn husks and stems was collecting them for his fire at home.
But he used the chance to walk around and beg for money, and have photos taken. 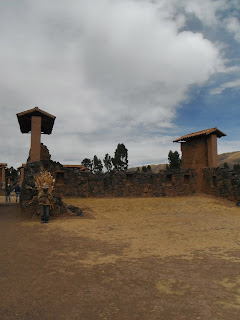 Then we met this lady walking through with the firewood.
She sat on the rocks to take a break.
So I sat down and tried a bit of my Spanish to talk to her.
She was so lovely.
She didn’t mind one bit that I took photographs of her and loved looking at them.
She was a beggar, and she was also pretty filthy. 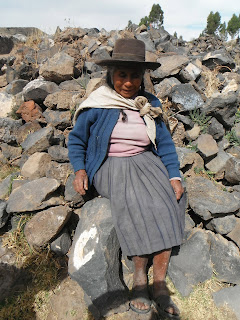 She was such a lovely woman.
I felt so happy we were able to give her some money and talk to her.
I love the old people of South America.
I love to help the needy. 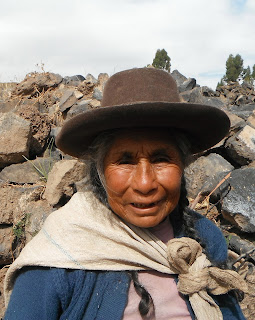 We then walked to the area where more ruins were.
Around the top ran a brick wall: 3 meters high and 2 meters wide. 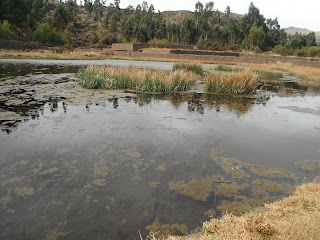 When we went to leave, we lost one of our group.
For 20 minutes the tour guide raced around to find her.
There were several unimpressed people on the bus when the girl finally emerged from her happy time.

Lastly, we went to Andahuaylillas.
This is a church which is said to be the South American Sistine Chapel.
It was, unfortunately, being renovated, and restored.
There is also a no photo policy inside.

The market opposite is set on the edge of a beautiful square.
The flame trees were the biggest I have seen.
I was just too tired to take photographs – I can’t believe that but it is true. 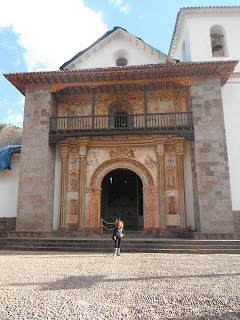 We finally arrived at Cuzco.
Here we were able to finally a lady and her son who had helped inspire me when I was planning this life adventure.
I used to read her blogs in the early days of my trip.
She would inspire me that ‘it can be done’.
And now we would finally be able to spend time with them.
I have only been ‘on the road’ 13 months, and they are in their 5th year, and they have now made a home in Peru for the past 2 years.

Lainie also interviewed us if you would like to take a look: