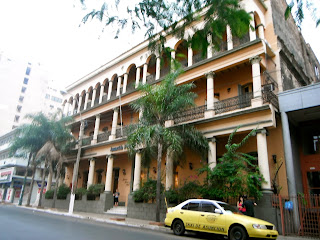 It is late afternoon when we arrive at the Asuncion Palace Hotel.
A lovely gentleman greets us at the taxi and takes our bags.
This is a surprise treat for my son.
And I am tired, and a little worn out from nearly a year of living out of a suitcase. 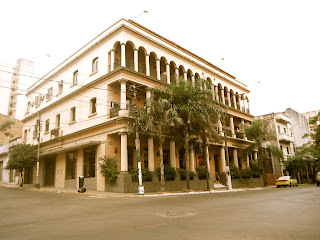 So it was lovely to be offered coffee and an iced milk chocolate on our arrival.
We first relaxed in the lounge area, then were served our beverages at the table.
I felt so much better – the bus trip had been a long one to get here. 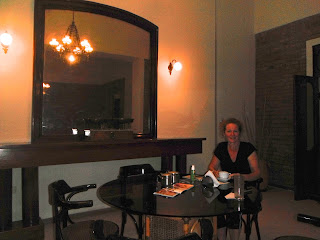 We were then shown upstairs.
The elevator is the old cage sort – and my son loved it! 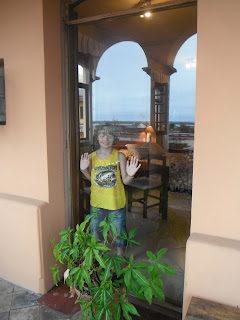 We were treated to the best suite in the house.
The 2nd-floor corner suite, with an amazing balcony, and beautifully restored.
My son raced around – it is a long time since we had such a nice place to stay in.
The balcony view looks over toward the river – and over the rooftops of some old buildings. 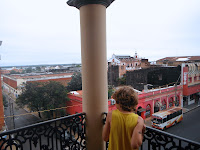 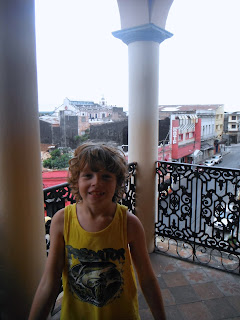 The suite is very spacious.
Double windows, and a pillow top mattress. 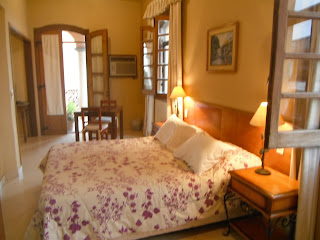 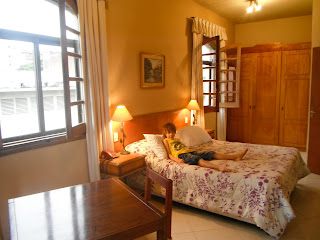 There are a lovely vanity room and a huge bathroom with full-size bath, the hottest and most powerful shower I have had in months, a bidét, and room to dance!

The lounge area has a full-size flat screen TV, and I love the French doors that open to the balcony.
When they are open – as well as the windows, there is a lovely feel of fresh air in the room. 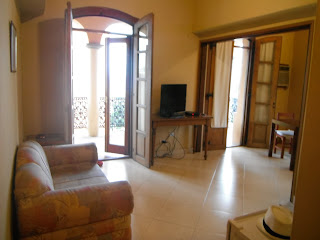 Originally this was owned by a member of the Royal family – I have placed some history at the bottom of the page. 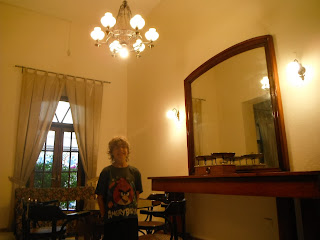 Downstairs there is a bar, and we sit and meet some new friends that night. 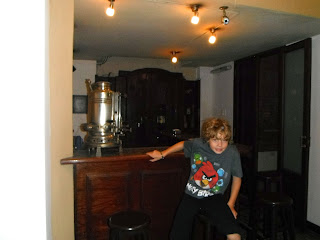 This hotel is probably the best-priced in the whole of Asuncion.
I can recommend the wonderful service, fabulous rooms, and filling breakfasts.

All 26 rooms are modernly equipped with Wi-Fi in all areas of the hotel, Cable TV which includes 60 channels, telephone with international line, private bathroom, air conditioner, mini bar, wide spaces.
With a wide range of amenities offered, all 26 hotel rooms are designed with comfort in mind, providing a warm and unique environment. The hotel has 24 standard rooms and 2 suites.

Breakfast and Taxes are included in the prices.

Located on Calle de la Aduana, currently known as Colon, this house was built for Colonel Venancio Lopez, youngest son of Don Carlos A. Lopez, by the Italian architect Alessandro Ravizza.
The house was opened in 1858 with a big party during which a particular type of music that was already popular at that time became known as Polka.
Venancio Lopez is said that he built the building at a distance from the center because his father never came to the area. Late in the afternoon, he would invite his friends, uncork some French champagne and sit on the veranda which overlooked Colon Street to watch people go by.
In times of Brazilian occupation, which began on January 1, 1869, during the War of the Triple Alliance against Argentina, Brazil, and Uruguay, the building was taken over by the Brazilians and became their Navy Hospital.
After the removal of the Brazilians, the house passed to the children of Venancio Lopez, who sold it around 1890. After the sale of the Hotel Argentino, it was renamed as Hotel Cosmos.
In 1943 the property was purchased by Don Eduardo Yubero, who founded the ASUNCION PALACE HOTEL, which is now run by his descendants.
The Asuncion Palace Hotel building is one of the emblematic architectural examples, built at the time of Lopez.
Each and every intervention made through time did not affect the vision or the essence of the main aspect of this building. Asuncion Palace Hotel is well known because of its Monumental Value, which with other architectural pieces, defines the urban aspect of Asuncion, and also gives you the chance to enjoy a magical flight into the city of yesteryear.
The ASUNCION PALACE HOTEL is located in the historic city center and is itself a historic building. It was built by the Italian architect Alessandro Ravizza in 1858, for the housing of Coronel Venancio Lopez, brother of Marshal Francisco Solano López (President of the Republic), who commanded the Paraguayan armies during the War of the Triple Alliance against Argentina, Brazil and Uruguay. Ravizza also built other buildings in the area, in collaboration with the British engineer Taylor Alonso, like the “Palacio de López”, first destined to be the residence of the Marshal, but that nowadays has become the seat of executive power, the Palace of Benigno Lopez, another brother, now houses the Ministry of Foreign Affairs, the railway station and the Pantheon of Heroes.