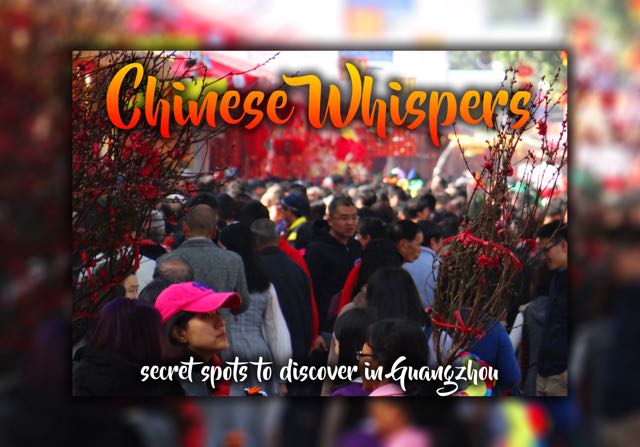 We are here for Chinese New Year and explore some places we refer to as secret locations of Guangzhou – places few tour groups will take you, and often not listen in your guide, but well worth a visit.

If you listen to the locals, you will hear ‘Chinese Whispers’ and softly spoken hints of the perfect places to explore!  Stories that make the history of this pretty city can be heard from the tender voices of the people of Guangzhou.

We always desire to learn something extra special about the regions we visit wherever we are in the world. We believe that if we dig deeper into the facts at hand, we will be able to find hidden places only known to few travelers, which can also mean fewer crowds. Yes, secret locations of Guangzhou.

With this said, when we last visited Guangzhou, our ultimate mission was to find the secret locations that act as a reminder of the culture and history of the region.

Tucked away beneath the surface at the back of the Nanyue King Tomb Museum is this amazing secret location. A walk into this tomb ushers you into the rich history of ancient China.

There is a lot to be learned here – about life and death. As you walk down the steps into the tomb, you will find a lot of information regarding the King, those also buried in the tomb, and Chinese culture. You then get to see different relics that date back to the life and times of the king.

One of these relics includes a jade burial suit, one of the most priceless suits used to bury members of Chinese royal families in the past – definitely one of thesecret locations of Guangzhou that rarely tours take you to.

Do not miss exploring the museum and hunt out for the display of intricate seals.  Look into the mirrors to see the etched detail below, and look above to see the intricate detail of each seal.

On another level, we adored learning about the Ceramic Pillows.  Did they lie on their back or their side?  Why tigers are used to chase away the bad dreams, and the patterns and painted detail of these beautiful pillows represent the dreams they wish to have – of flowers, birds, and clouds.  There are many other things that were found in this king’s tomb museum and that are now beautifully displayed.

You might want to learn so much about Zen Buddhism by finding and exploring the inner sanctum of Hualin Temple. Within this ancient pagoda, you will be able to see hundreds of golden Buddha status and many other religious items. Finding this temple is however not as easy as it might sound.

Many people get lost while trying to find it as it. Because, it is hidden somewhere around the massive Liwan Jade Market. It holds a significant meaning to Buddhism as it was founded by a monk who is said to have introduced Zen Buddhism in China from India.  Buddhism is a popular religion throughout Asia, often with unusual and ornate temples and a very peaceful belief system.

Tucked away in on top of Yuexiu Hill in beautiful gardens is this legendary statue; a somewhat hidden location for many tourists who visit Guangzhou as it is in the park and not on the road.

Legend has it that the story behind the prosperity of Guangzhou is more than 2000 years old.  Once a barren and dry land, Guangzhou suffered a severe famine. One hot day, five immortal ram figures clothed with five colored flowing garments came riding onto the dusty plains.  As they rode in they were heard to be playing legendary Chinese music. In their mouths, these rams held sheaves of rice. The immortal rams left behind the sheaves of rice as gifts for the locals. They gave their blessings to the ancient city. The Rams then turned into stone and the city became a rich place.

In modern times the statue was built (only in 1960) from more than 130 pieces of granite and is one of the city’s emblems.

A visit to this park and a walk up the stairs to the top of Yuexiu Hill is worth adding to your list of secret spots to visit.  If you listen to the stories and whispers of the local people, they will tell you more about this amazing legend.

Shamian Island dates back to the 18th Century and has a large colonial influence and is also one of the secret locations of Guangzhou. It was when foreign merchants were finally allowed to build homes and factories in the area.

Today, this area, which was once a useless mass of sandbank in the Liwan District of Guangzhou, has turned into a beautiful tree-lined neighborhood with lovely houses and relaxing atmosphere.

It borders Pearl River and acts as a symbol of modernity to people like us, who cannot believe just how much this area has developed over time.

A drive on this island takes you into the life and pride of ancient foreign merchants and their contribution to the development of the region.

We loved just driving the streets, seeing the expensive houses and mansions, and imagining who lived there.  Or take time to visit a traditional Tea House and enjoy a delicious Cantonese Dim Sum Brunch.

While there are so many parks in the city, this specific one known as Cultural Park is special in more than one way and is one of the secret locations of Guangzhou. It gives you a taste of Chinese culture as you get to watch and listen to amazing Chinese folk songs.  Then walk through exhibitions, a feeling that takes you back into the life and times of ancient Chinese communities.

The Literature Center in this park is where most of the performances take place. However, creativity is not only seen in the singing and speaking. It is also seen in the landscaping which is beautifully done to share a peace of Cantonese culture.

It is an excellent place to go relax as you pick a fact or two about the culture of Guangzhou locals but it is pretty much a secret location for most tourists.  If we haven’t whet your appetite, for China yet, then maybe it is time to explore the great travel deals that are on to fly there.

Guangzhou prides itself on being a clean and modern progressive city.  But it is also lovely to discover one of her hidden secret locations – Lingnan Impression Garden.  A drive a little out of the center of town to this beautiful garden and ancient village area.

Here you will see China as it used to be, wandering the streets and waterways, and taste authentic Cantonese food.  It is also a great place to shop for souvenirs at a reasonable price in one of the ancient shops.

Sacred Heart Cathedral completely built from granite so is well worth seeing, but for most tourists, it remains a secret location.

It is one of its kind in the world as there are a handful others that are built using the same material. It still holds Catholic masses every week in different languages. If you are a religious person, you can attend a mass here.

Otherwise, you can visit and have a glimpse of the beautiful architecture whose construction took 25 years and dates back to the late 18th Century.

Check out these extreme