A blanket of white snow lays across the rolling hills and drapes softly on the boughs of the trees that form a soft arch as I drive through.

The road has not been snow-plowed, so I am somewhat nervous, but I soon learn to take it easy, and just go slow and enjoy the journey as we head toward Sighișoara from Brasov.  Romania is just beautiful. 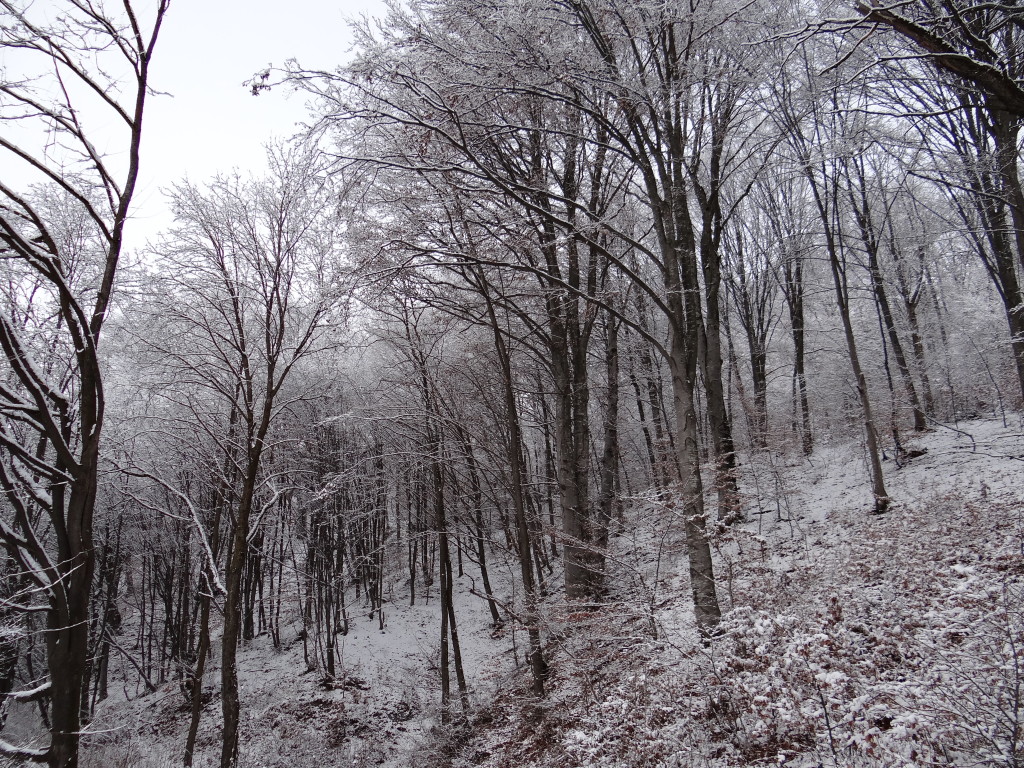 Exploramum and Explorason – driving to Sighișoara with snow on the trees

We pass castles and old churches and had it not been snowing, I would have been tempted to stop and explore, but the side roads were not accessible. 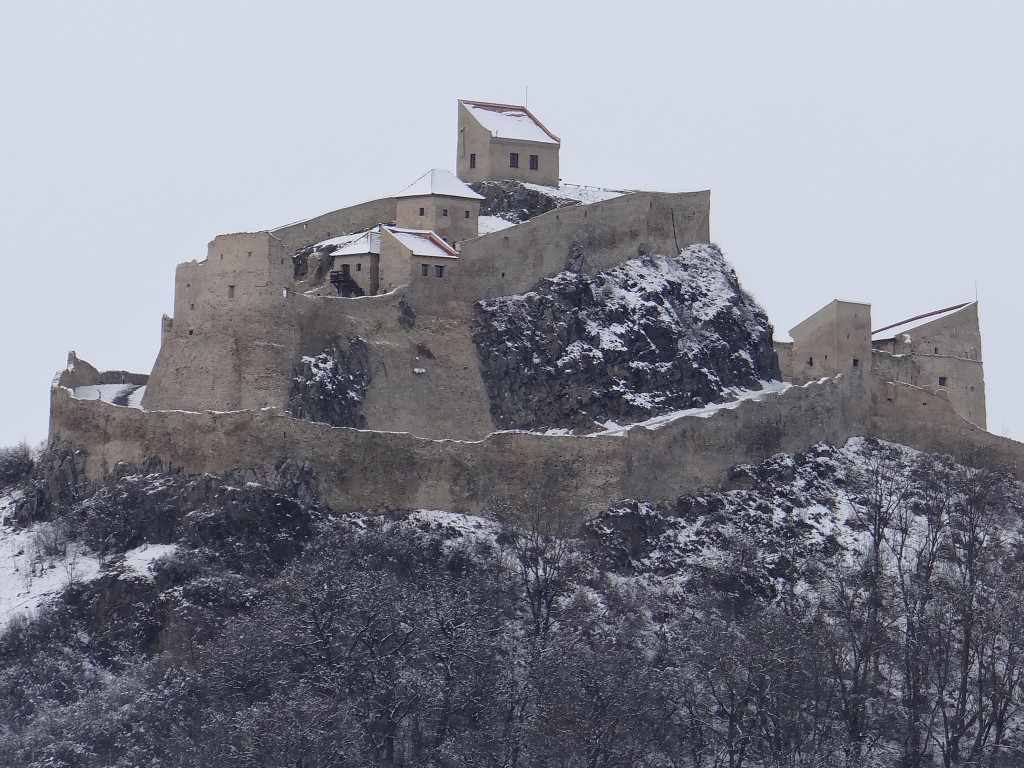 Exploramum and Explorason – driving to Sighișoara we pass forts, castles, and churches

Most of the side roads were thick with snow, and so we only get to stop on the main roads. 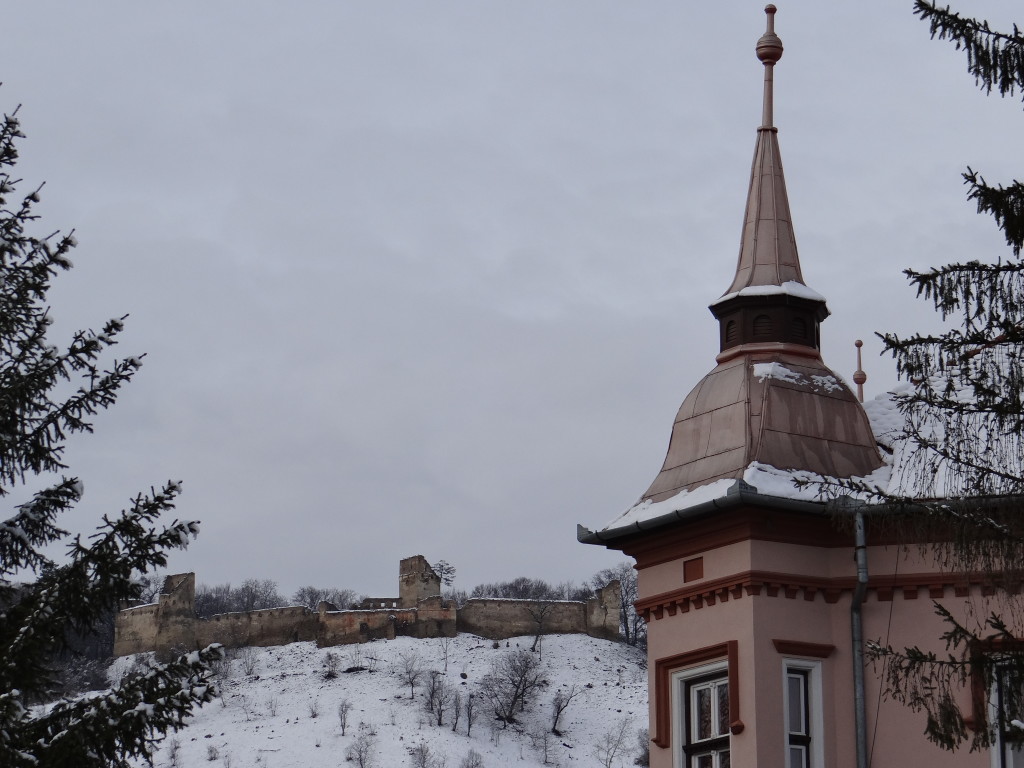 We park and have the most amazingly inexpensive lunch I can recall in a restaurant.  Wine, water and pizza for both of us and it was the equivalent of $6 AU all up.  And it was a nice restaurant too.  We head up the steps to the old town, as the snowflakes gently start to fall. 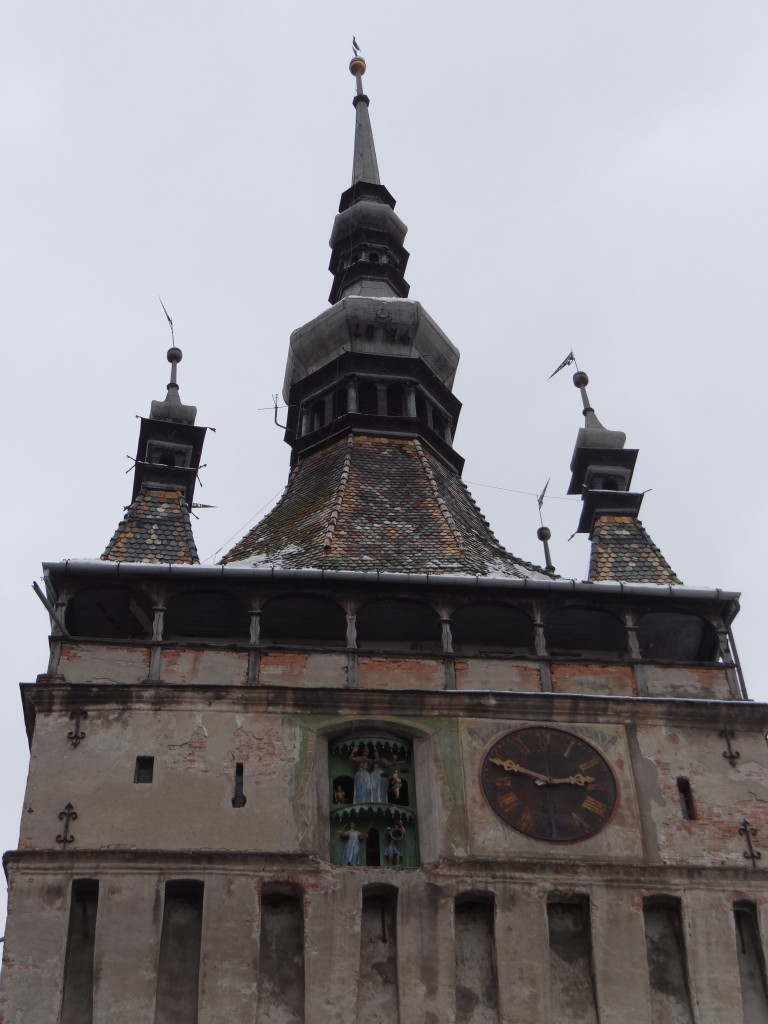 I love my new camera and play with the zoom on the figures of the steeple clock. 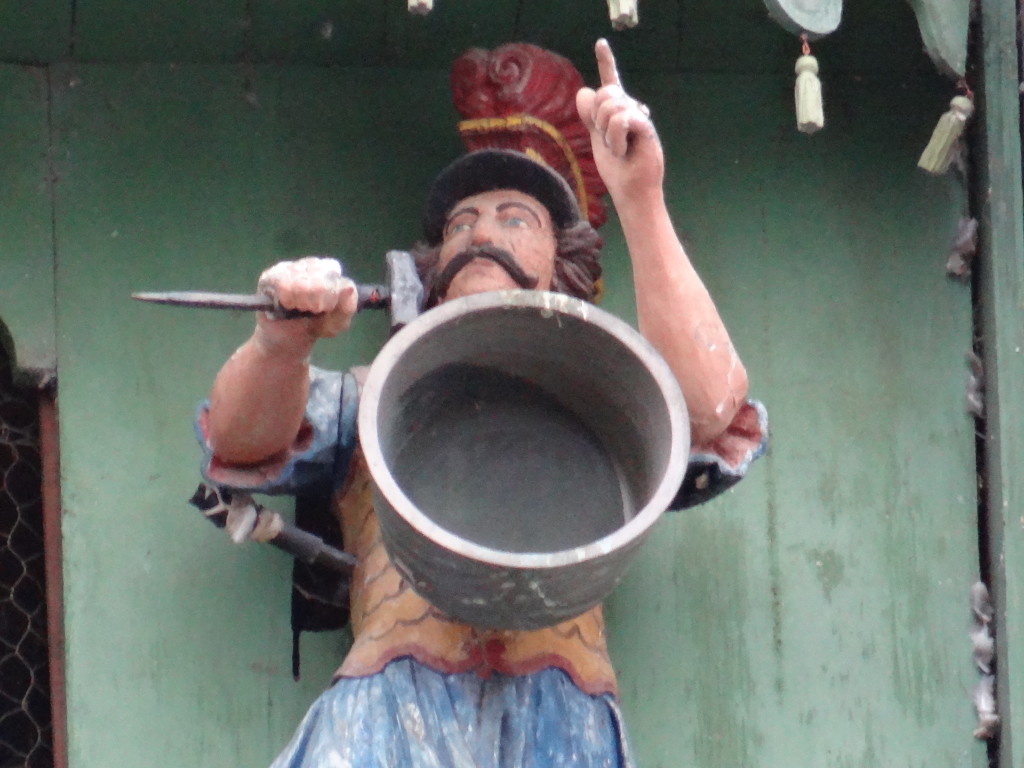 The buildings are old and lovely.  I love to capture things of the past. They have a rich history and culture. 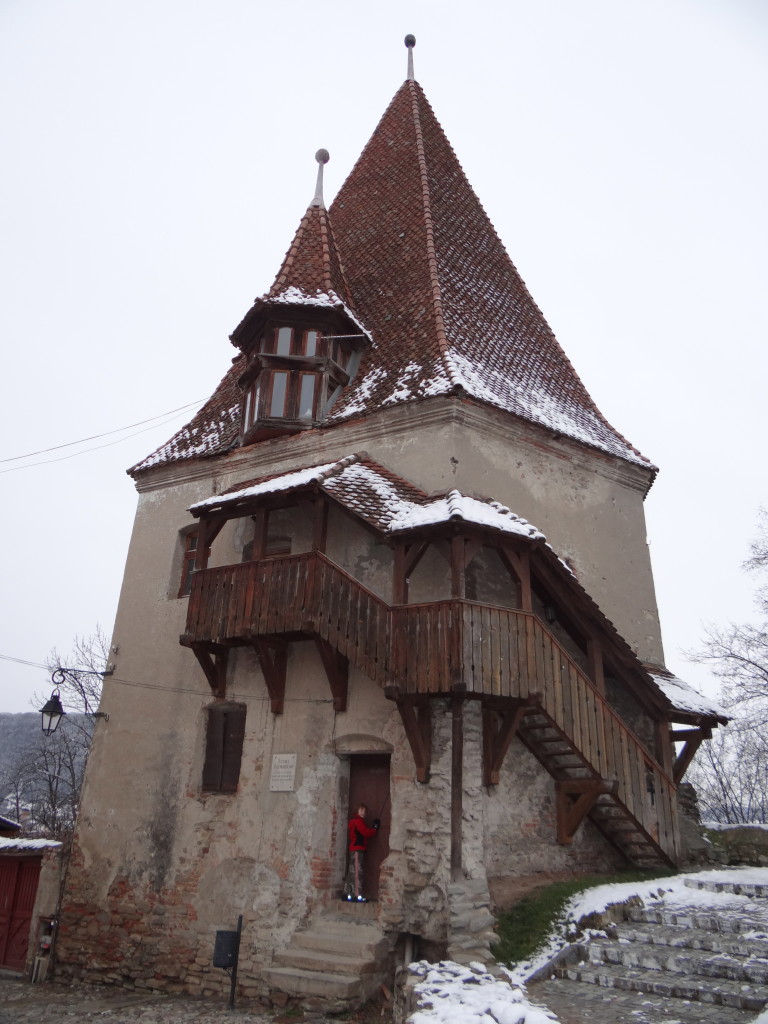 Exploramum and Explorason – Sighișoara – fabulous old buildingsThis is a town you could spend half a day wandering around in with great delight.  In fact, we may even go back as we are in the region a while for New Year. 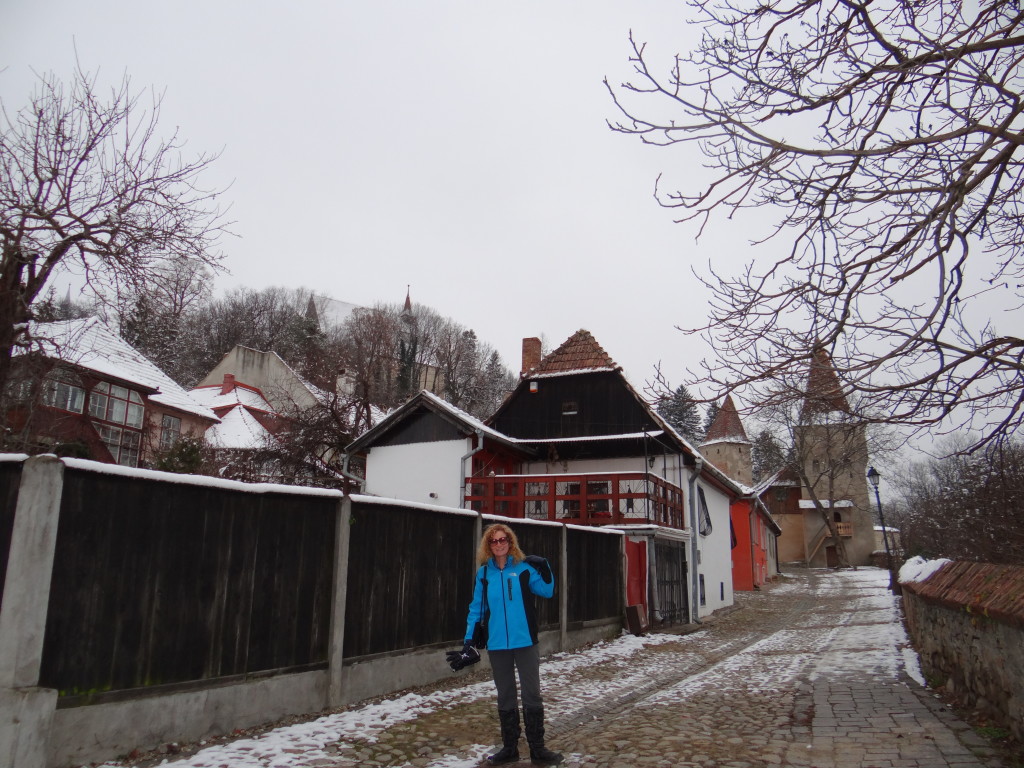 Exploramum and Explorason – Sighișoara – it starts to lightly snow

We find it is getting late in the day, so we are walking quite quickly through the village, and don’t go up the covered stairway for the school children. 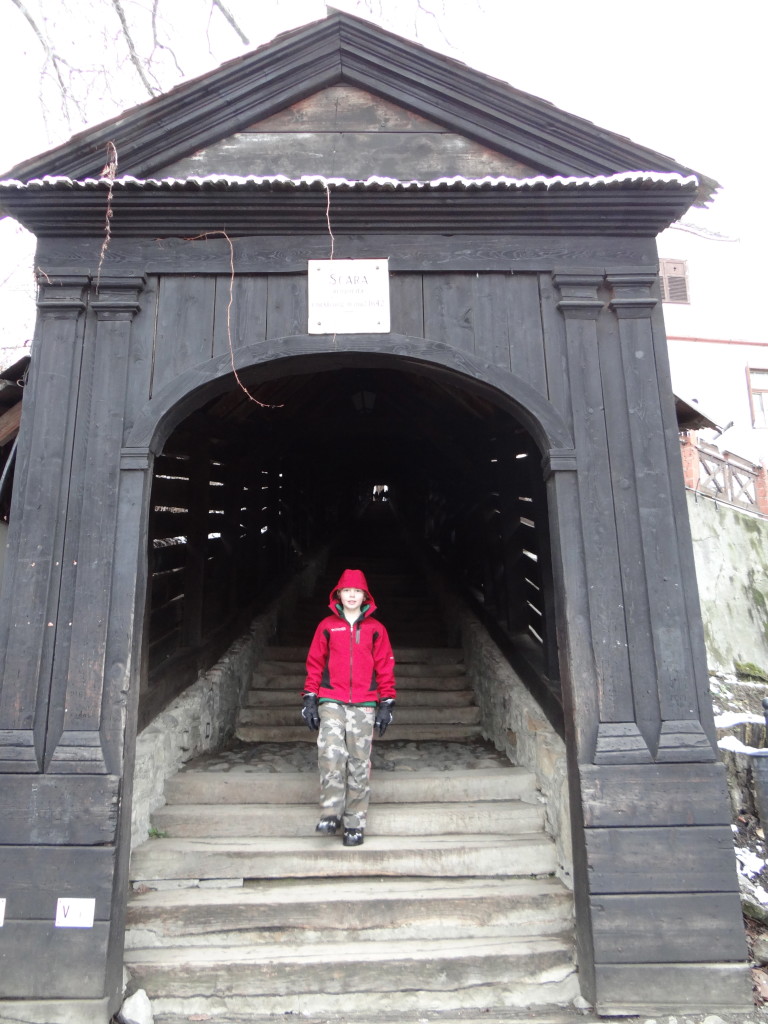 Exploramum and Explorason – Sighișoara – covered walkway to the school

We do stop for a quick snowball fight. 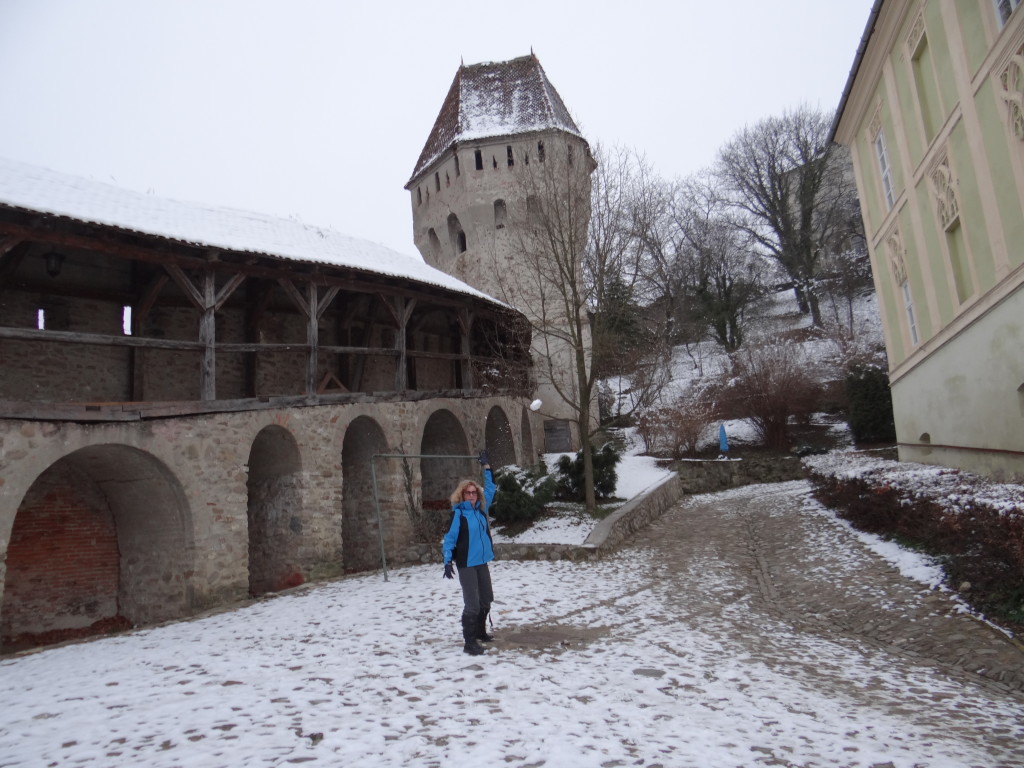 And then we spy an interesting place.  We find out this is the birthplace of “Dracula”, or Vlad Dracul. 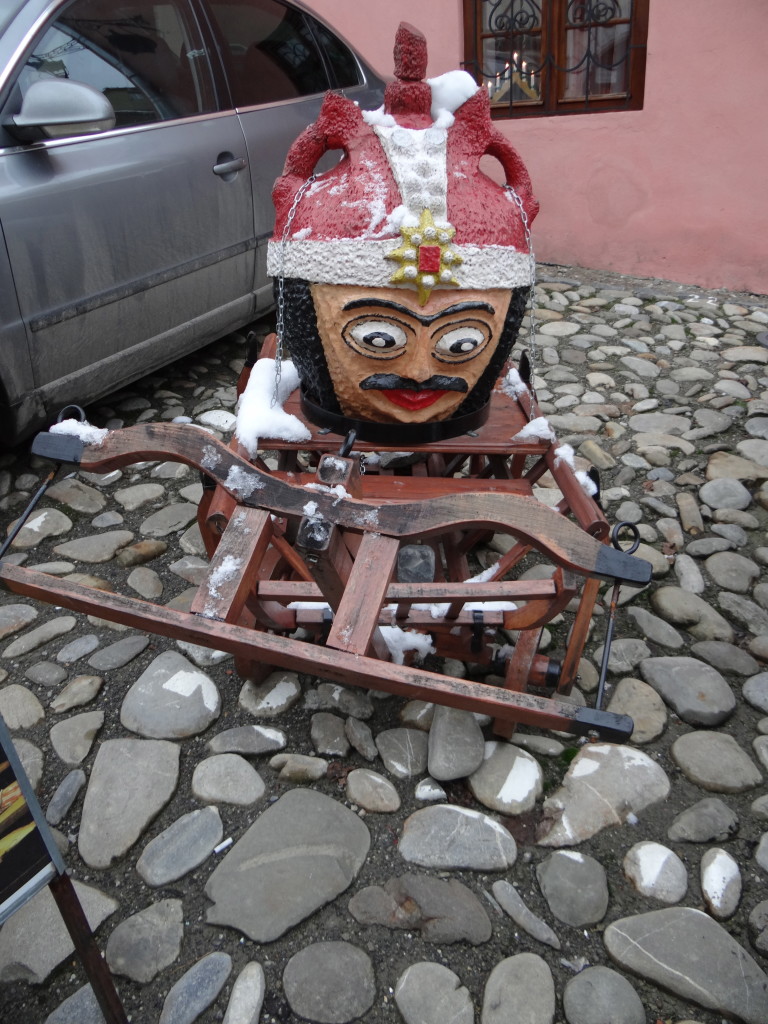 We head in and wish we had lunch here in this historic building. This is the most gorgeous restaurant, and well worth a visit.

For five Lev each, we buy a ticket to view the room Vlad was born in. 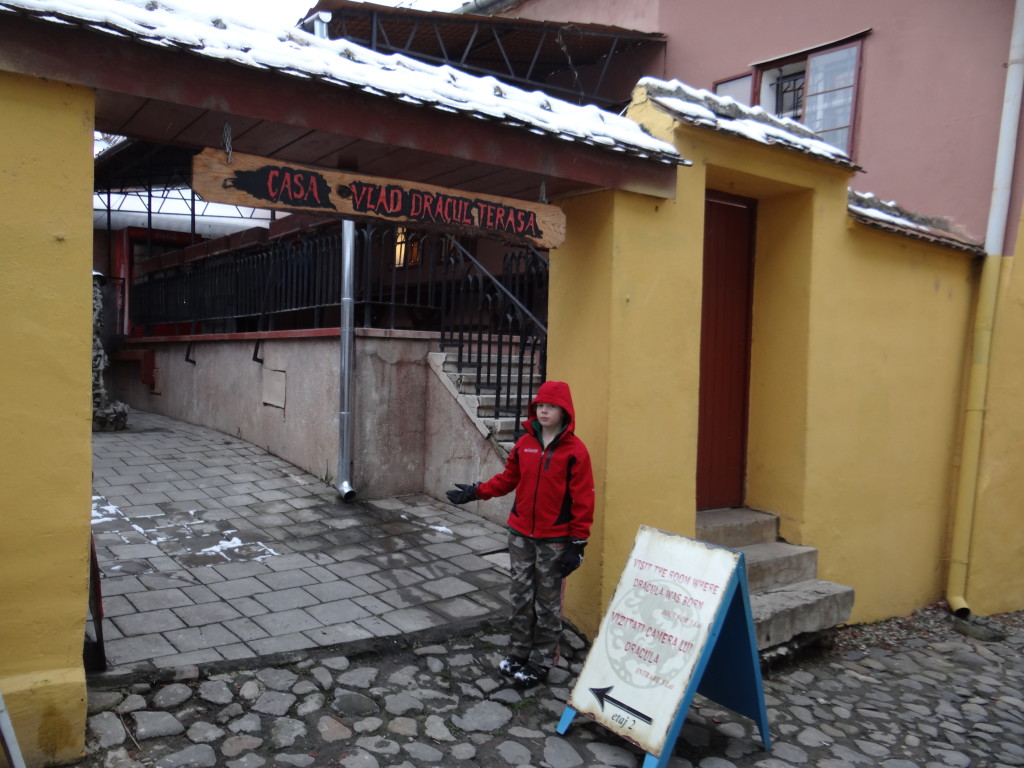 We walk up the stairs into what I think will be an average bedroom, maybe with a crib in the corner?

But instead, we find Dracula lying in his coffin.  We thought he was a dummy model. 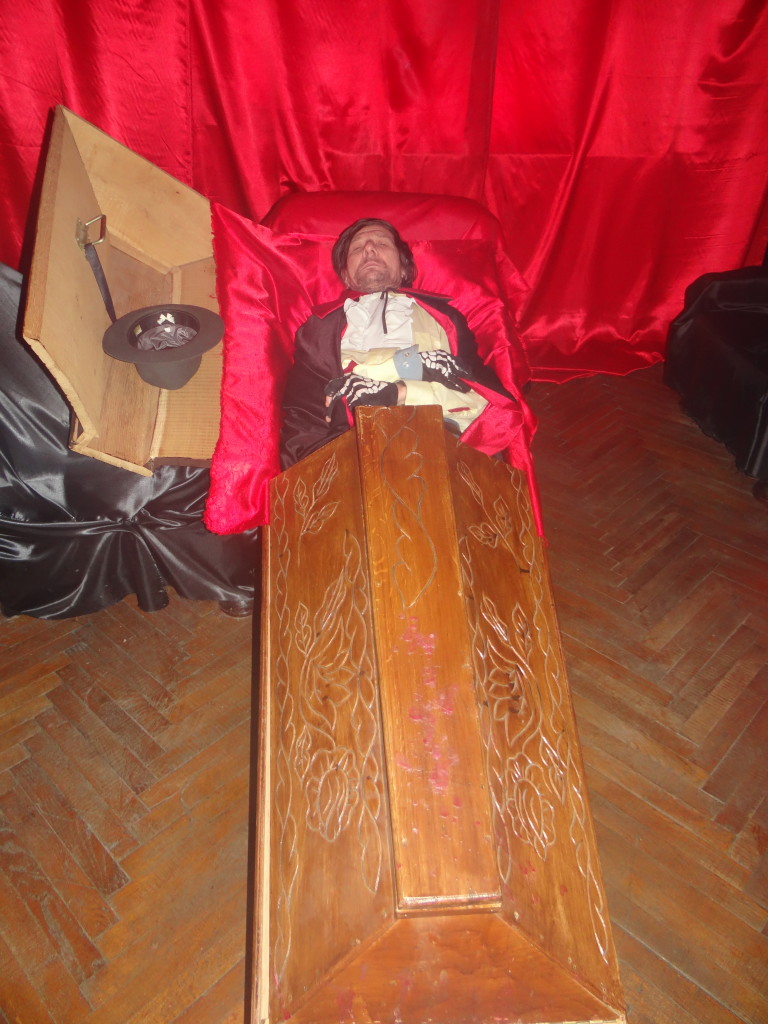 Exploramum and Explorason – Sighișoara – Vlad Dracul’s birthplace – his bed is a coffin? 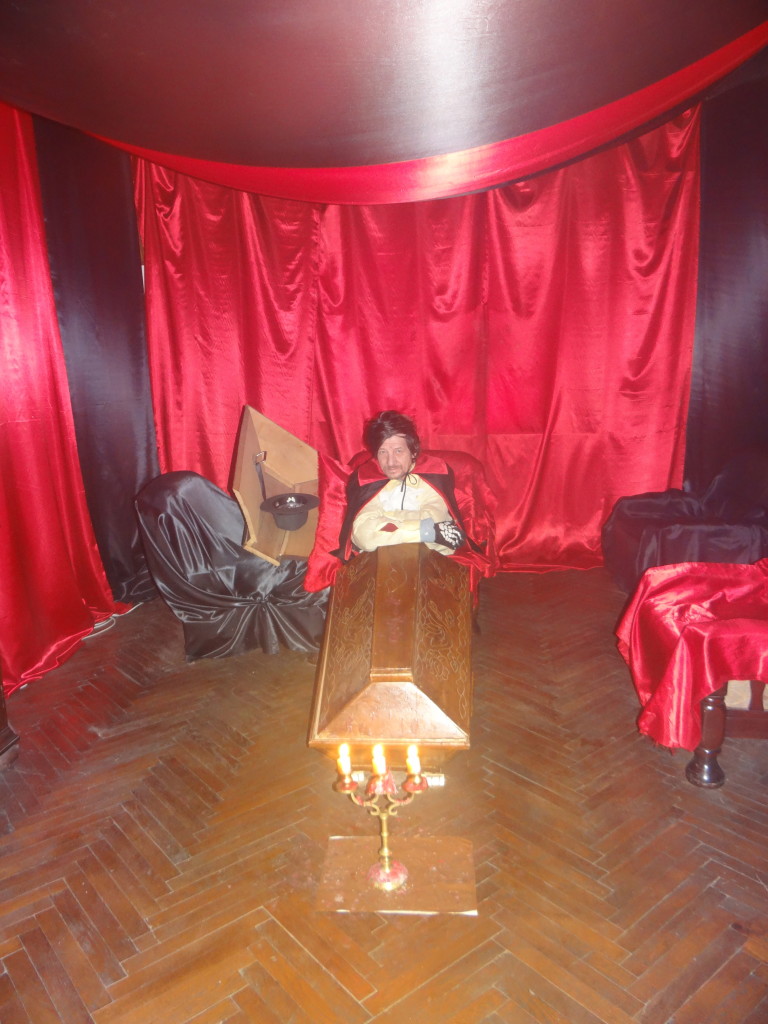 Exploramum and Explorason – Sighișoara – Dracula rises from his sleep

And then he lets out a grueling sound, and we both jump out of our skin! 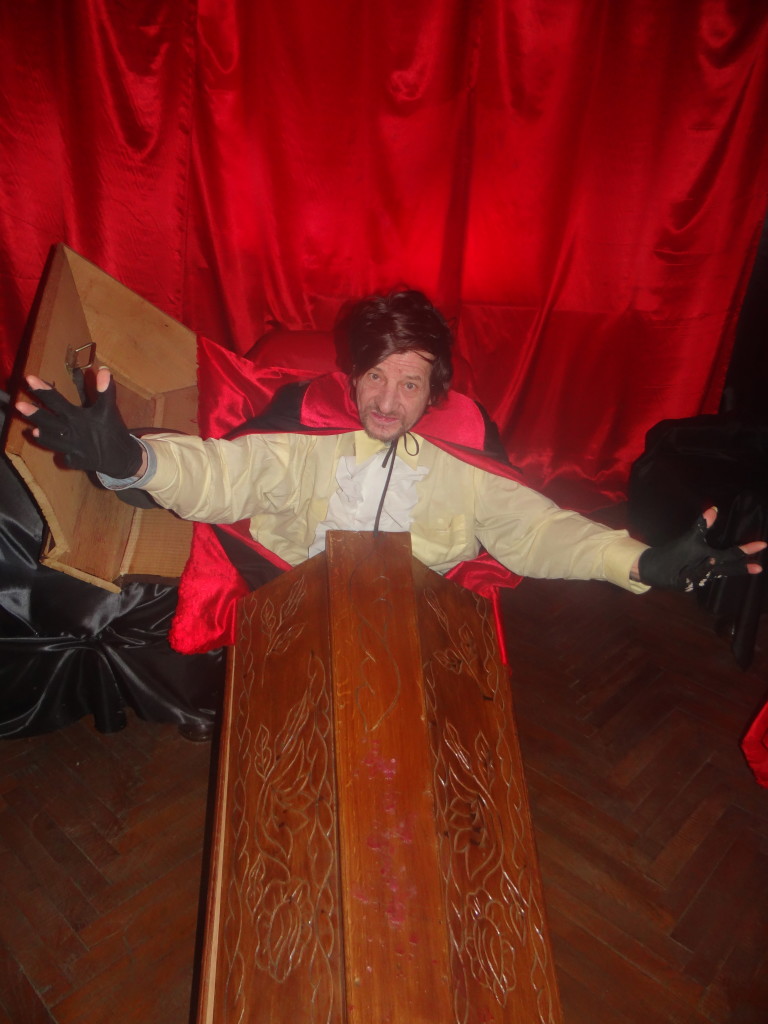 We race into the next room, and I think we are both white as ghosts.  The next room is a dining room with a model of the real (Vlad) Dracula. 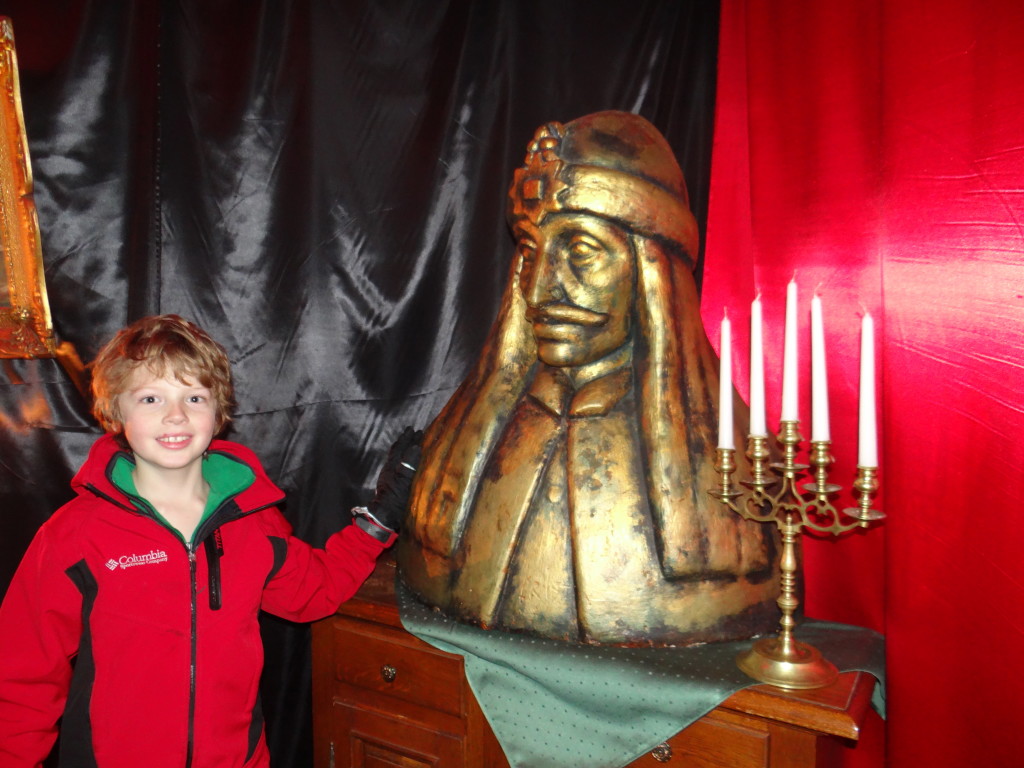 Exploramum and Explorason – Sighișoara – The bust of the real Vlad Dracul

It also has his portrait, and in the lighting, his eyes are somewhat creepy. 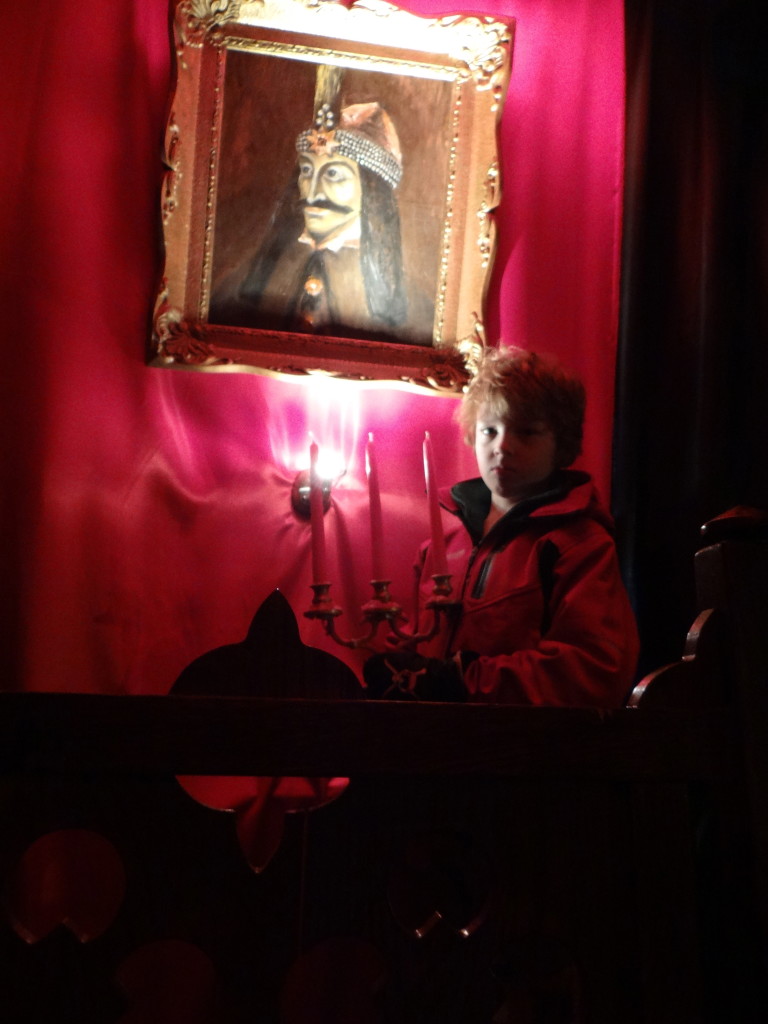 As we walk back through the ‘bedroom’, Dracula grabs Explorason and goes to bite his neck !!!!

Oh my, we did not expect this!

We give a nervous laugh and race out saying how fantastic this pace was for the money. I think it was fantastic because we never expected any of that. 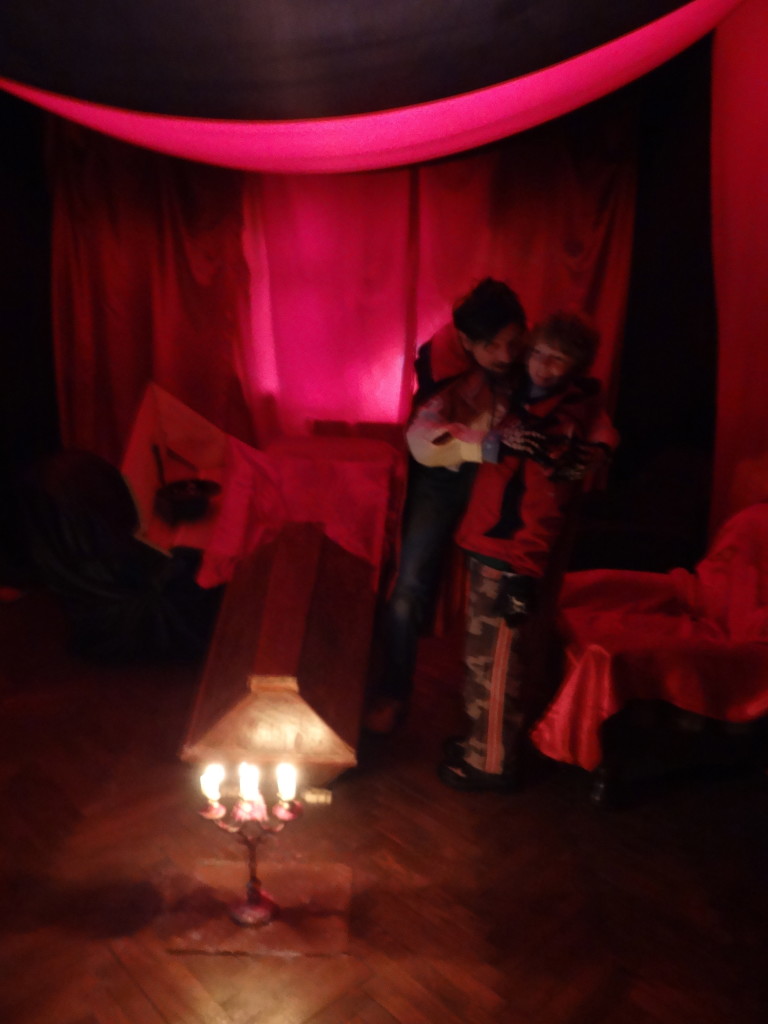 Here are some interesting facts from about Vlad Dracula’s birthplace from http://romaniatourism.com/sighisoara.html

The Vlad Dracul House is located in the Citadel Square, close to the Clock Tower. This ocher-colored house is the place where Vlad Tepes, the inspiration for Bram Stoker’s famous Dracula, was born in 1431 and lived with his father, Vlad Dracul, until 1435 when they moved to Targoviste. A wrought-iron dragon hangs above the entrance. The ground floor of the house serves as a restaurant, while the first floor is home to the Museum of Weapons (see museum details).

Benefiting from the friendship of the Hungarian king, Sigismund I of Luxembourg, Vlad II Dracul, the father of Vlad Tepes, spent his youth at the royal court and later distinguished himself as a brave knight in the fight against the Ottoman Empire. Dracula, the title of Vlad Tepes, translates as Son of Dracul.

For his deeds, the Order of the Dragon was bestowed upon him, hence the title Dracul(the Latin word for dragon is Draco). While in medieval lure dragons served as symbols of independence, leadership, strength, and wisdom, the biblical association of the devil with the serpent that tempted Adam and Eve, gave the snake-like dragon connotations of evil. Thus, the Romanian word Dracul stands in English for both dragon and devil.

We stayed at a quaint little place for 2 nights called Pensione Sighisoara.  It was perfect for us.