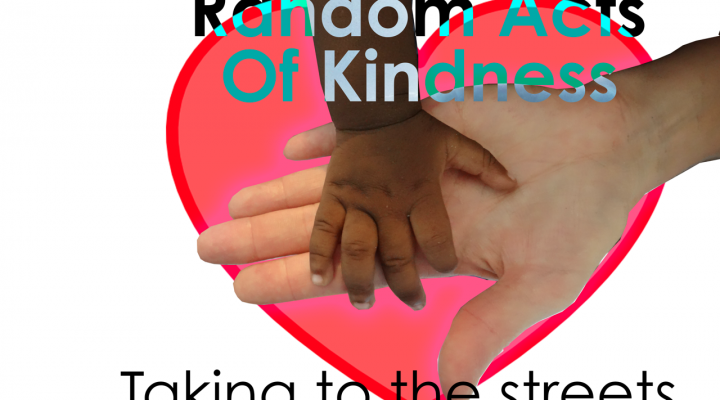 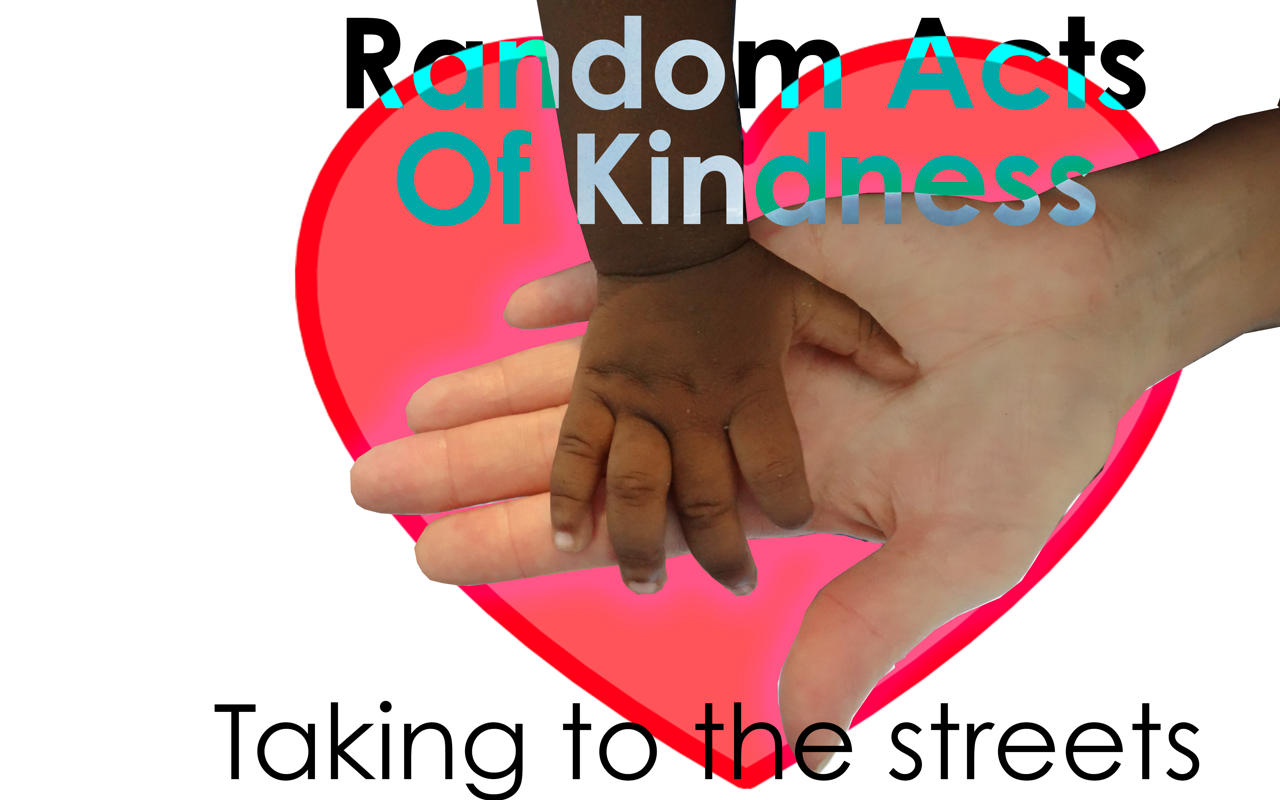 Kids care about the Homeless at Christmas.

Now we have returned to our home-town of Adelaide for a while, it is lovely to catch up with friends.  Last week we finally caught up with one of Explorason’s ex-schoolmates. A lovely ten-year-old girl named Charlotte, who has recently moved to the countryside.

Whilst we were there we talked about our journey and helping the poor along the way.  Sometimes we don’t realize the kids are listening in on our conversations.

Charlotte talked about seeing the homeless on her recent trip to Melbourne. And with her Dad working in the remote Australian mining industry, she sometimes sees homeless lying on benches in town when they go to pick him up from his bus if he arrives back late at night.

Jakki, Charlotte’s Mum and were amazed when the kids were talking, and Charlotte suggested the children bake cookies to give out to the homeless in Adelaide for Christmas.

So she and Explorason “got to work” in the kitchen the next week. 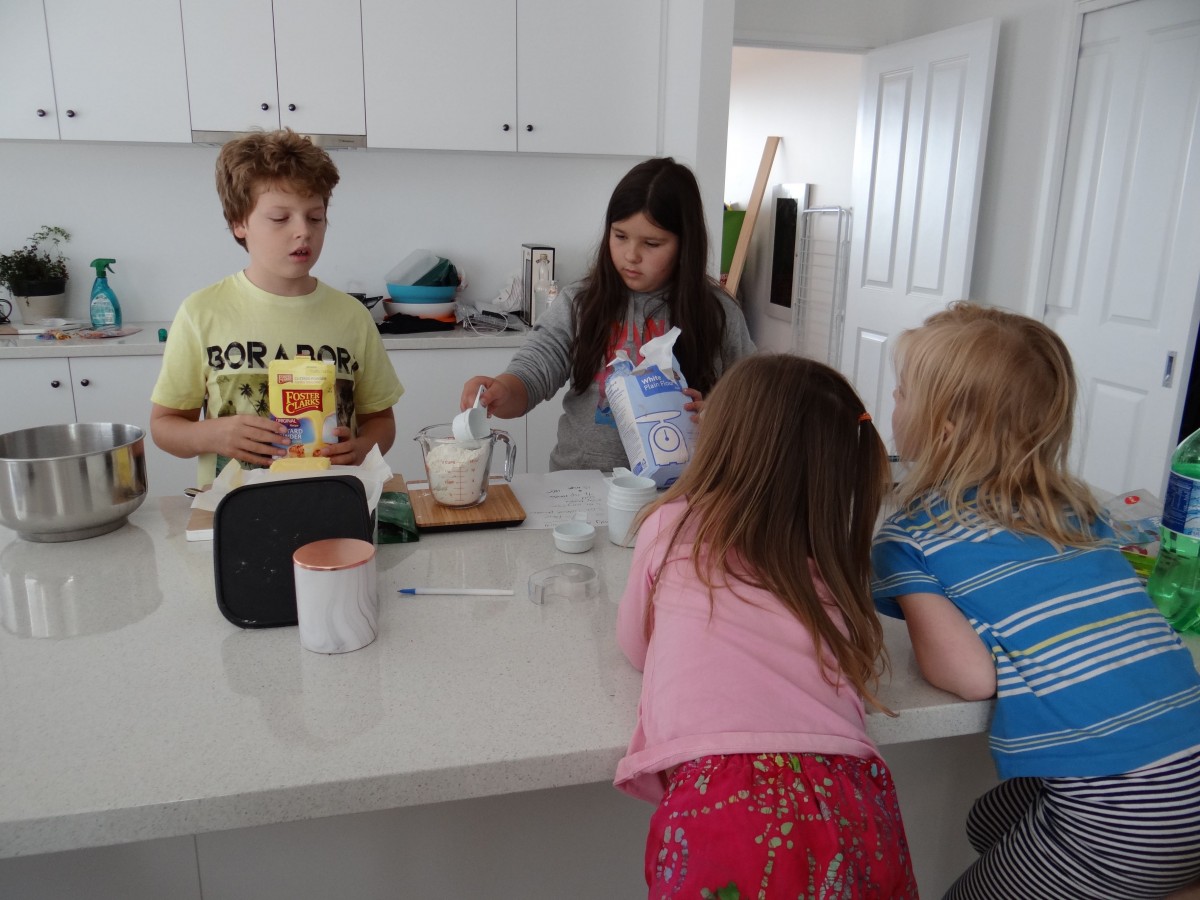 With hands washed, they each had a bowl of cookie dough, and set about to make “Joy’s Cookie Recipe”.  This is a recipe from a fellow school friends Grandma, who is aptly named ‘Joy’ (Joy is a perfect name for the Cookies at Christmas). 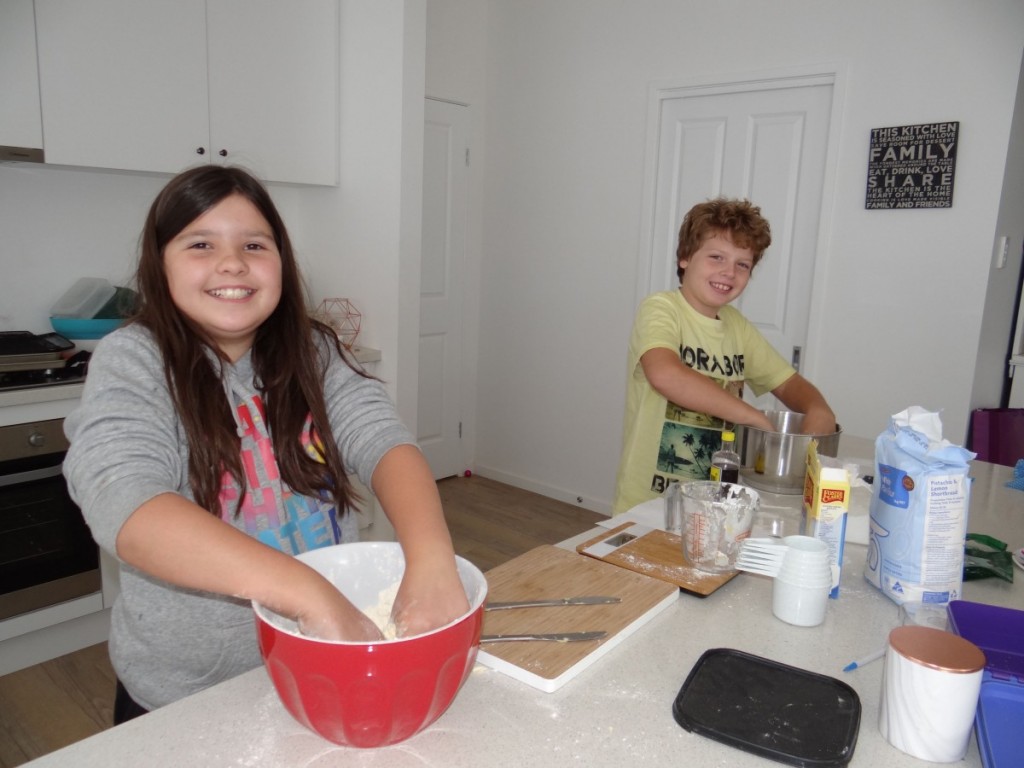 These two ten-year-olds had loads of fun, and the toddlers even chopped up the glade cherries. 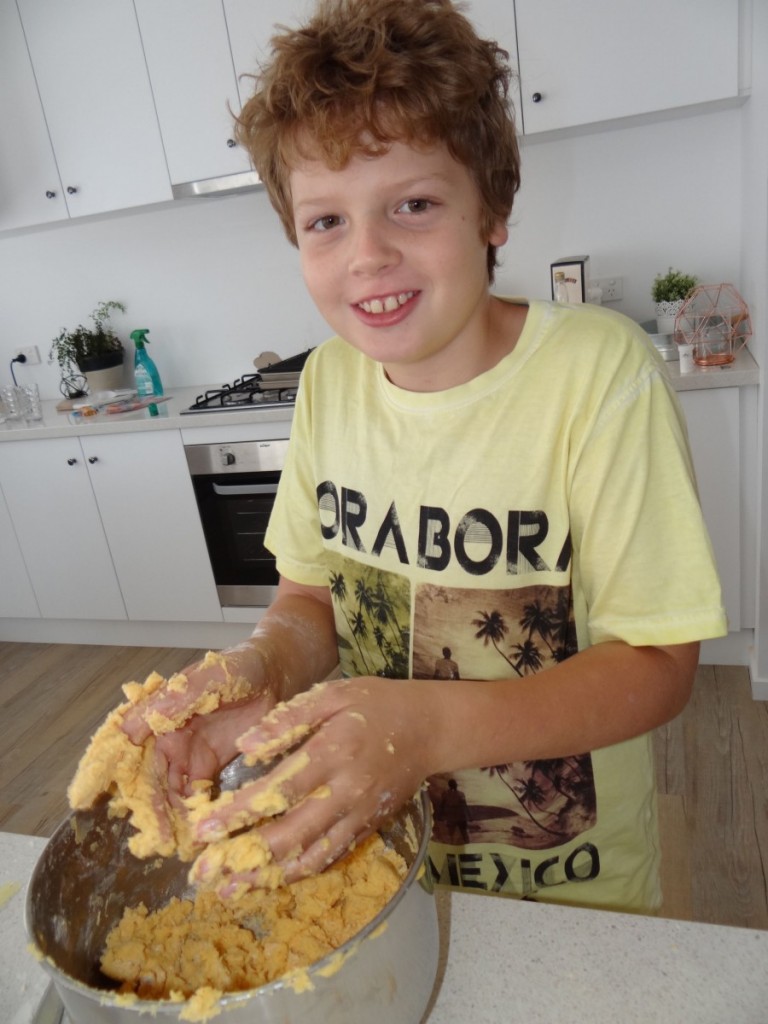 I think they made nearly 200 Christmas Tree Cookies all up. 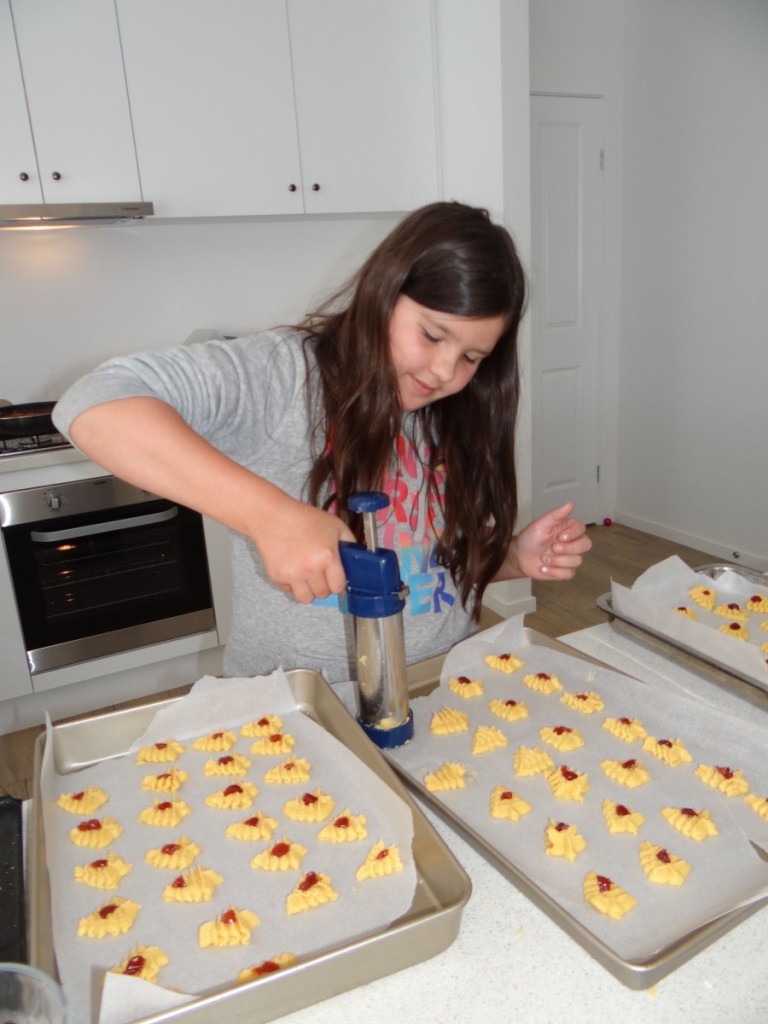 Whilst they were cooking, they then set about writing out Christmas Cards for each of the recipients. 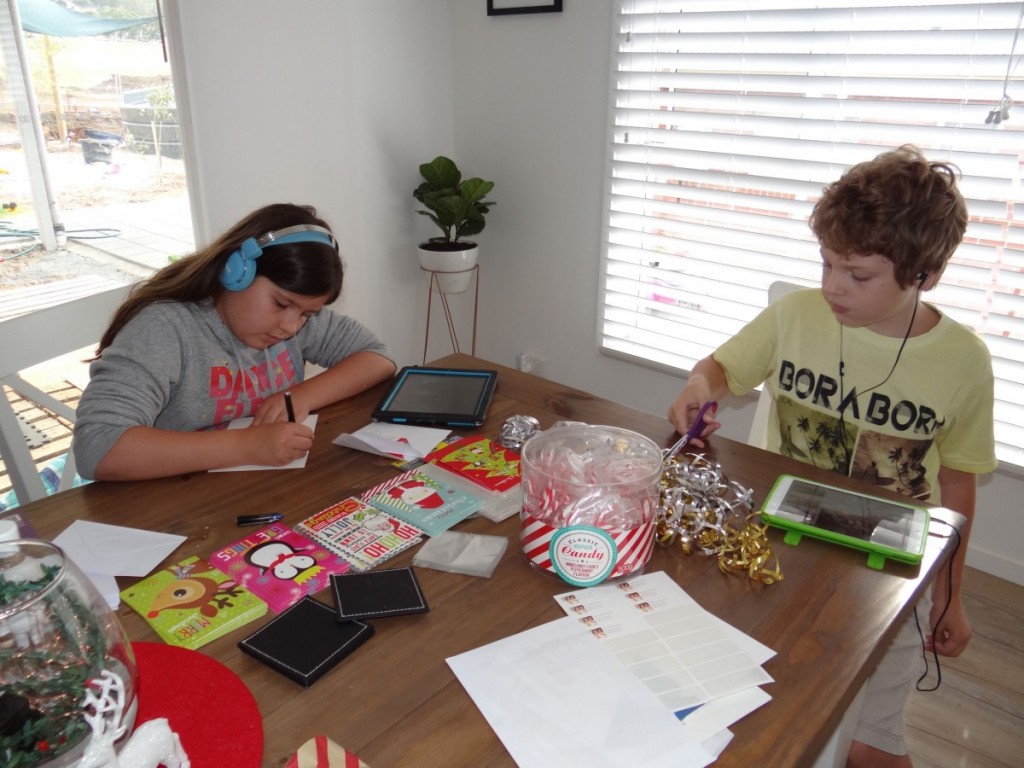 ©Exploramum and Explorason – Cards for ‘a special person’

Charlotte chose the wording and each card was addressed to “A Special Person”.

We talked about how those sleeping on the streets would have no family with them, and no-one to love and care for them when they slept out in the cold.  (On this particular night Adelaide had a cold snap – it had rained and was only 14oC – a rare temperature for December).

The kids wanted each person they met to ‘feel special’. 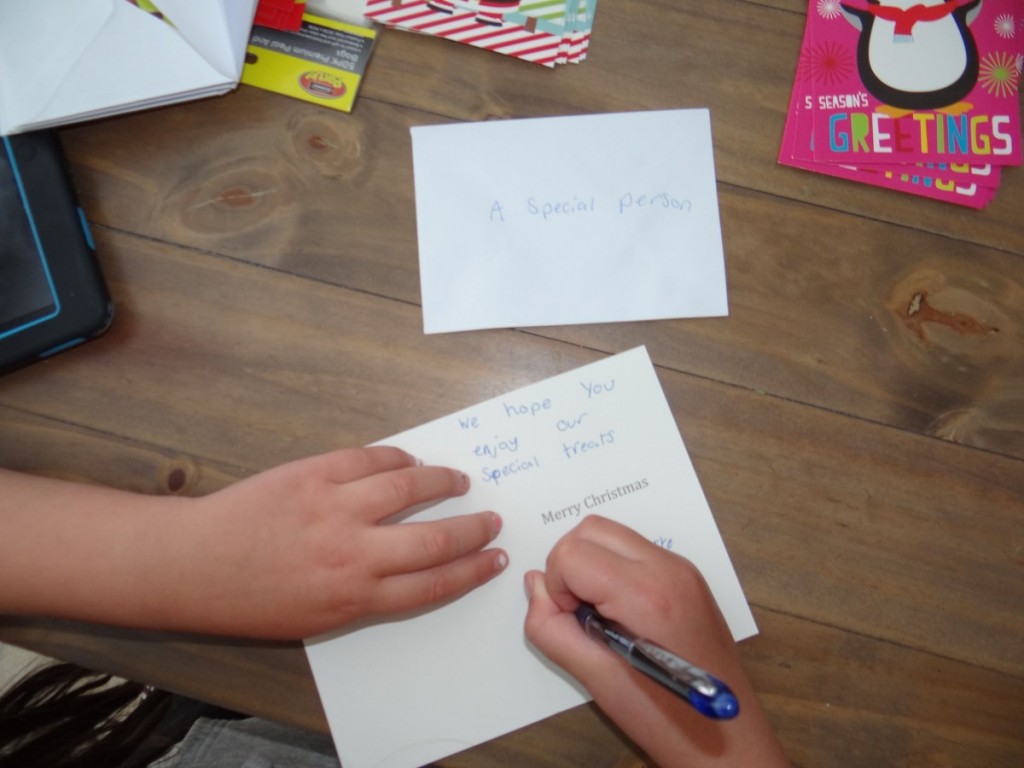 ©Exploramum and Explorason – Writing Christmas Cards to ‘A Special Person’

Soon the house was filled with the aroma of “Joy’s Christmas Cookies”. 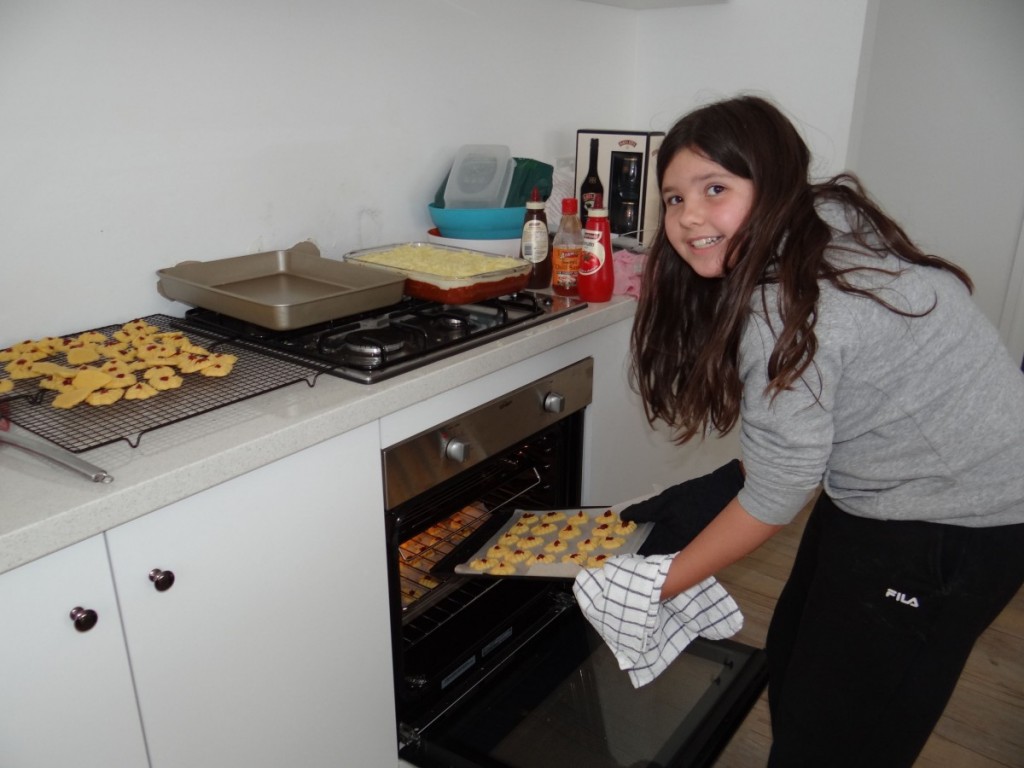 ©Exploramum and Explorason – Charlotte is busy at the oven

We cellophane bagged several cookies and added a couple of candy canes to each package. Each child had a tray ‘ready to go’, along with the Christmas Cards they had written out. 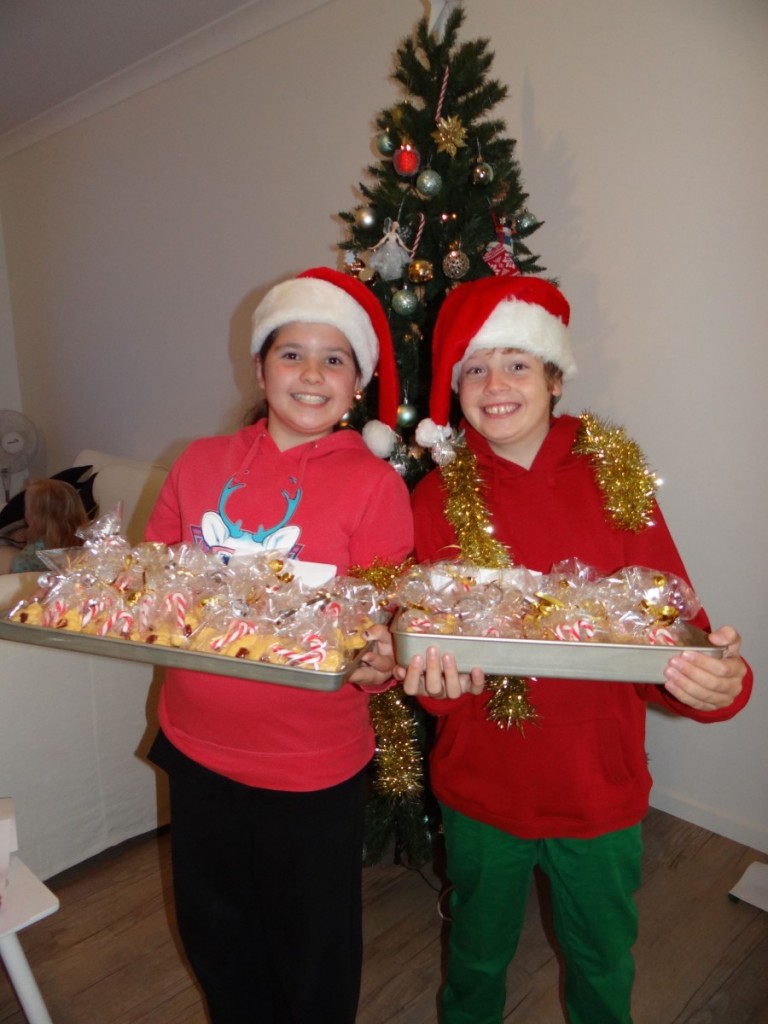 ©Exploramum and Explorason – The Christmas packages are ready

We then drove for nearly an hour into Adelaide City.

We were a little bit early, and the only people we found were a bunch of drunks at the Salvation Army Detox Centre, waiting to get in.  We didn’t want to give to them, as they were a little abusive and disorderly, and we wanted the kids to feel safe and appreciated, so we drove on.

Soon Jakki saw a man walking along with his sleeping bag.

We turned around and parked, and the kids eagerly ran out to give out their package and card.  He was such a happy man.  He said his name was “Theory” (so the kids later told us).

Theory said to us, “This is probably the best thing that will happen to me this Christmas”, and he was such a nice and cheerful guy.  Apparently, he was heading to the Homeless Shelter for the night. 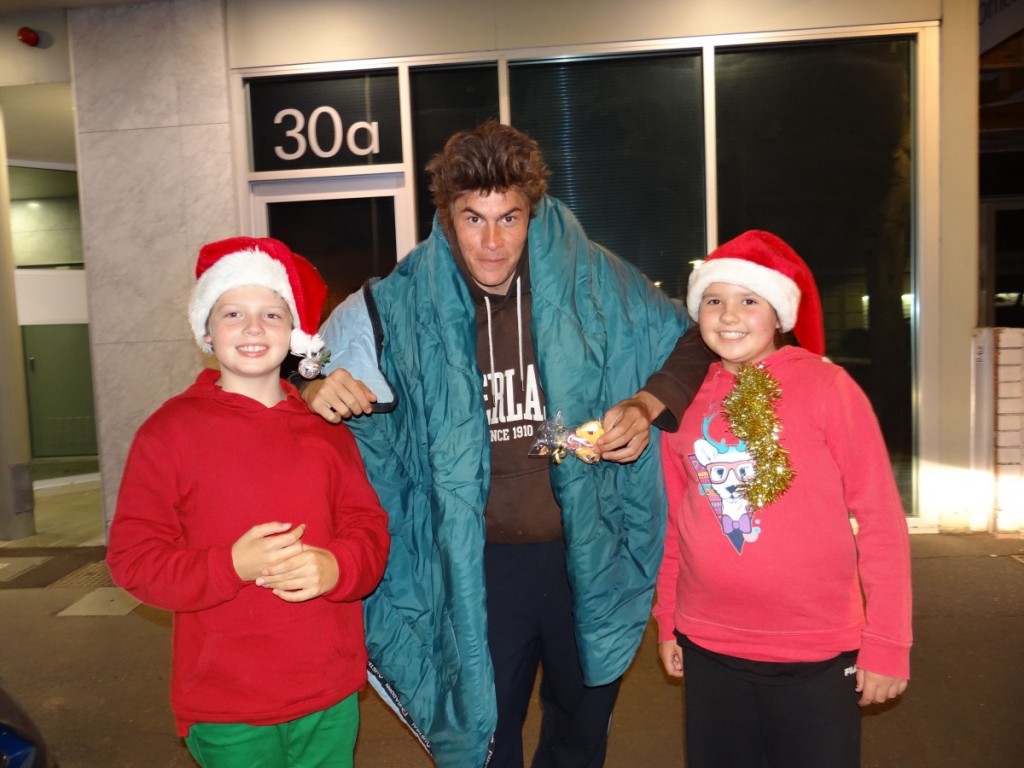 ©Exploramum and Explorason – Giving out cookies on the streets

Next up was a man on a park bench.

We discovered all of the town squares, and most of the gardens had the watering sprinkler systems running.  We wonder if this is a deliberate move by the Council to stop the homeless sleeping on the lawns and benches?  We did spy some blankets nearby, and wondered if they were his, or belonged to a homeless person who was somewhere nearby? 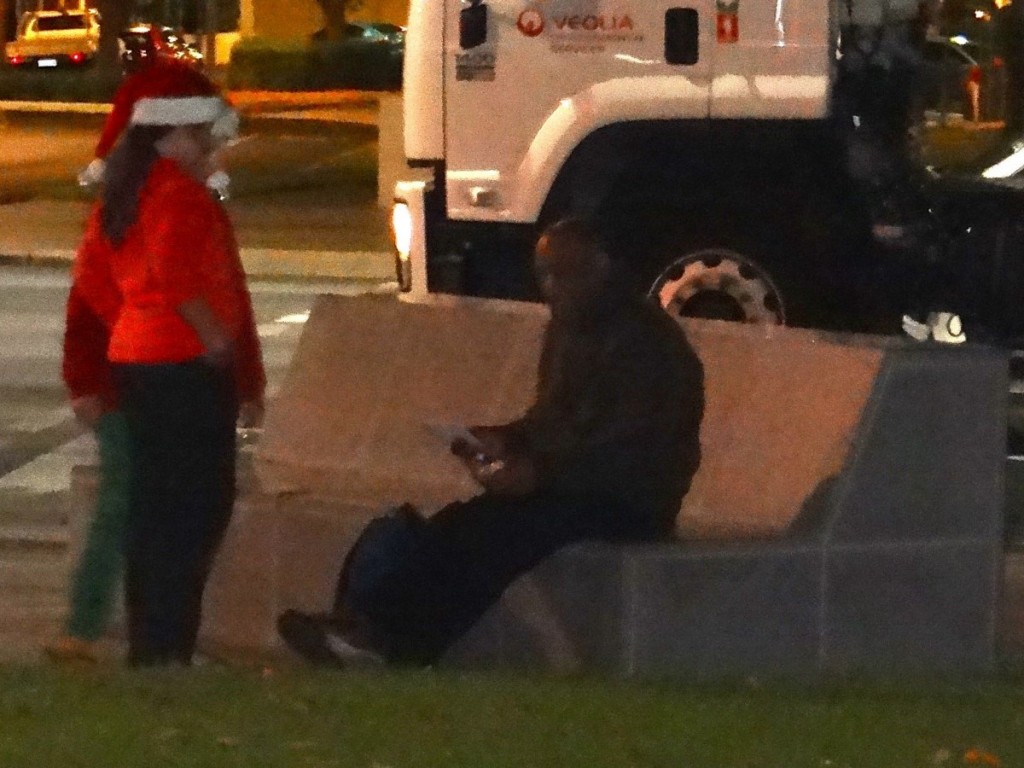 ©Exploramum and Explorason – Giving to strangers

Next, we met a lovely homeless man sleeping outside the Salvation Army in another part of town.  He and his friend “Grinder” were set up for the night.  He wasn’t a drunk, and we chatted away to him for ages.  He filled us in on the places the homeless tend to sleep in the city.

It was lovely when he said that “you kids have probably made this the best part of Christmas for me”.  He asked us to leave a card and cookies for “Grinder” too, who was out ‘finding himself some dinner’.

(Apparently, someone had just been by and also given him some chocolate TimTam biscuits, and for a man with no teeth,  don’t think decay was going to be an issue!). 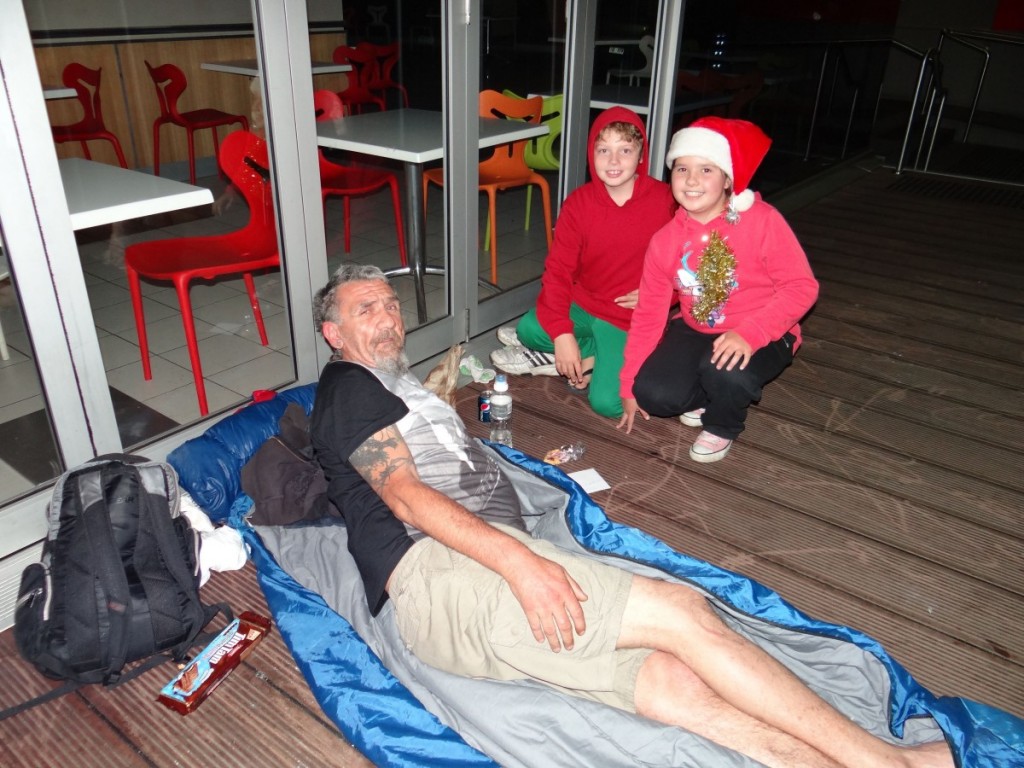 ©Exploramum and Explorason – Giving out Christmas cookies to the homeless

For those of the homeless we met that were asleep, the kids chose to just tuck their Christmas card and cookie package close to them, and leave them sleeping. they never woke any of them but wanted them to wake to their treats. 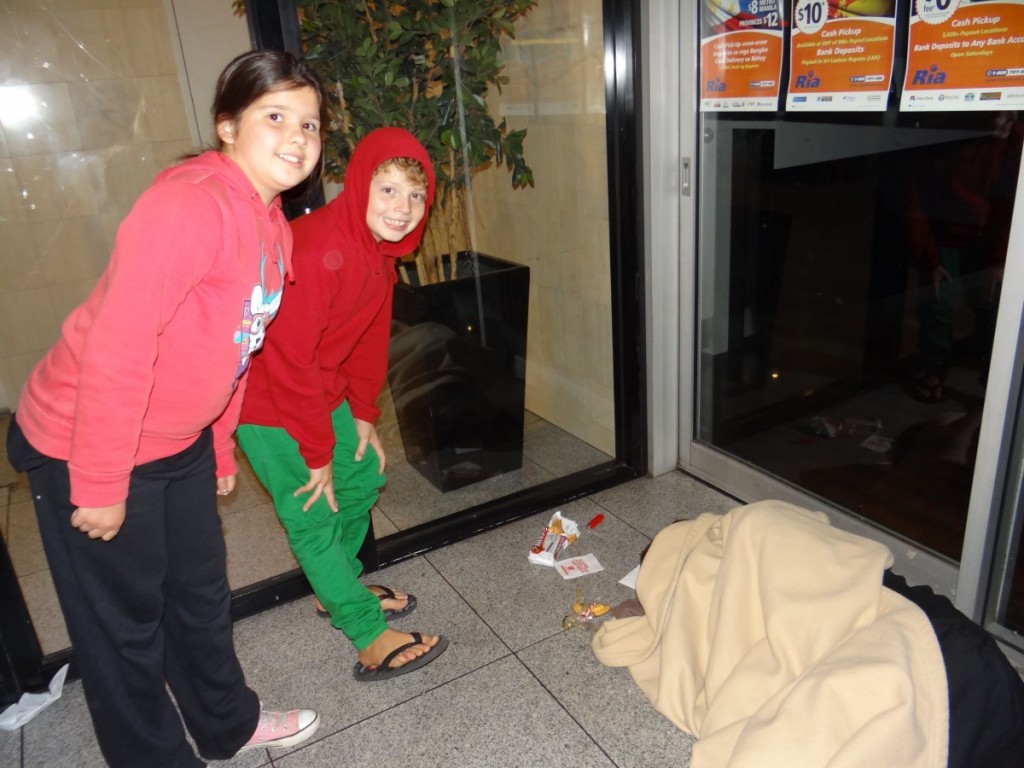 ©Exploramum and Explorason – The kids give as the homeless sleep

We met one guy who was setting up ‘camp’ on North Terrace.  He had a bike and was just settling down for the night.  We did wonder if he was cycling through Adelaide, or if this was a more permanent arrangement?

Still, a random act of kindness was appreciated by him, and he was really pleased that the kids cared about him too. 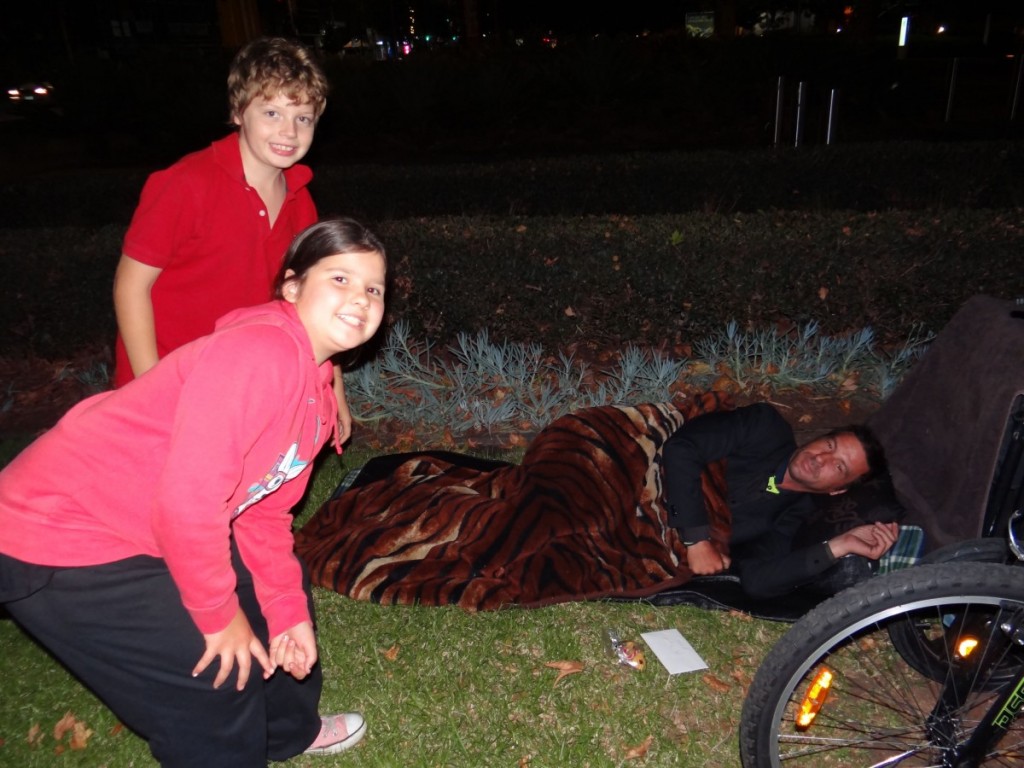 ©Exploramum and Explorason – This man was sleeping in the park

One of the last people we came across was a lady. She was pretty well set up on her bench with a windbreak and possessions nearby covered by a blanket.

She spoke to us, but her head never came out of the covers.

We wondered what her life had been like – how she had ended up on the streets – where her family was – why she had no-one to love and care for her.

Whatever the case, the kids decided she was special, and they wanted her to know, they cared about her. 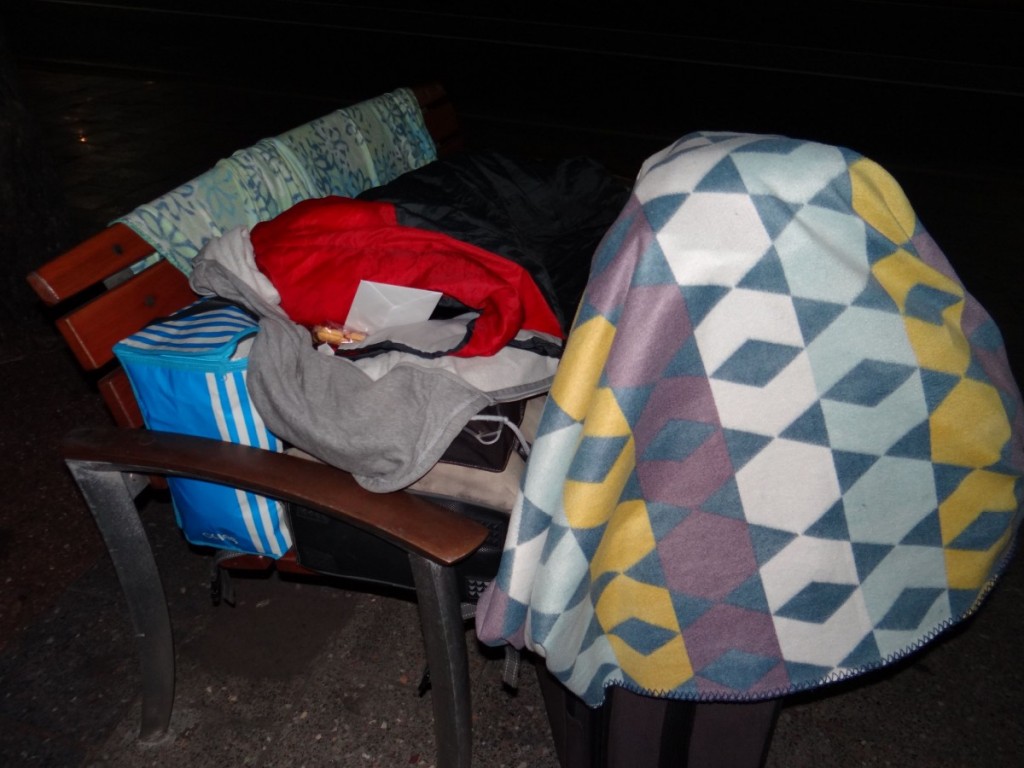 ©Exploramum and Explorason – Christmas cookies are given to this homeless lady

So as Christmas (and a New Year) are rapidly upon us, can we encourage you to take a moment out of your busy schedule and think about those who have less than you:

You might be the person that makes the difference to their world, by showing them YOU CARE.

A special THANK YOU to Jakki and Charlotte for helping us to help others.

From us to you, we wish you a ‘Blessed and Merry Christmas’ and thank you for following us as we continue our world journey.

May 2016 be a year where we can each focus more on the value of human life, and each does a little to make another life more valued.

Note: Out of respect, all those whose faces are clearly shown, were asked if we could take their photograph taken, and gladly agreed.

This article is written not to boast of our works, but to encourage others, that even children can make a difference at Christmas.