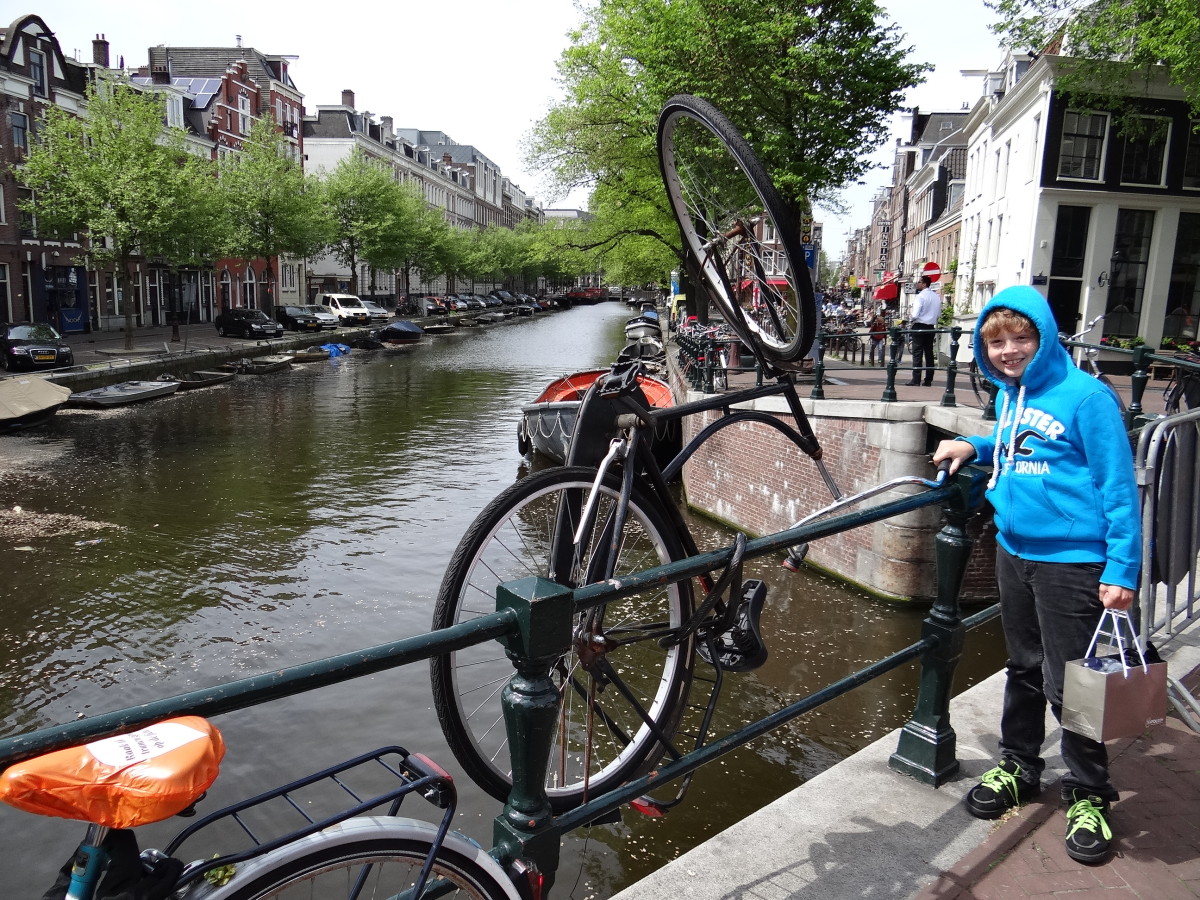 Amsterdam is more than clogs and bicycles.

It is more than the famous Red Light district, the ladies of the night, and the frolicking shows.

It is more than the surrounding windmills, canals, and houseboats.

It is more than edam cheese and tulips.

Amsterdam is a city of all of the above; but it is way, way more.

You can find amazing food, quirky shops, and warm-hearted people.

Wham Bam Shazam … We take a weekend to explore Amsterdam and the surrounding area, and here is some of what we found.

We had stayed the first few days just outside of Amsterdam with one of the kindest Dutch ladies I have ever had the pleasure to meet, and you can read about that here.

She drove us in (past windmills and canals) and dropped us into the famous cheese market at Alkmaar, and we had a great time wandering around.  Her friend we went with even bought herself a pair of clogs, so we felt very authentic that day.

Then she suggested we go to the “green village” Zaanse Schans.

Here my son was educated on the history of clogs, and even see a diamond covered clog.

We also see how they made them, and decorate them, and the changes over the year. Yes, we also learn how to wear them.

We then wandered around and went to see how they made cheese.

Then we walked over little bridges and saw how they originally diverted the water.

This area is below sea level and needed the waterways channeled, so the land could be used for farming and housing.

We had fun. that was the best bit.

Explorason decided to hide in a big clog. Loads of Japanese tourists were around at the time.  They would come to stand in the clog and he popped out of the hiding space. Oh, they laughed.  It was good fun!

We acted silly.  Yes, you can act silly in The Netherlands.

Then we went to the Keukenhof Tulip Gardens.  There were so many things for kids to do. And a lot more areas to play and have fun.

And then we went into Amsterdam the next day.  It was not officially Mother’s Day, but because we had traveled last Sunday plus I had been ill, so we decided TODAY was going to be My Mother’s Day.

Explorason had wrapped up some souvenirs and little gifts he had collected along the way. The lady we had stayed with had helped him, and had even included a gift from her of something I really wanted – a clog planter – I was thrilled!

Now did you know Amsterdam is famous for pancakes? Yes, you can get the BEST Dutch pancakes at restaurant Pancakes! Amsterdam.

Explorason thought his chocolate covered American style one was pretty good too, but it isn’t Dutch.

This is such a popular place you might have to line up and wait, but it is well worth it.

Best pancake I have ever tried!

And the cappuccino was great.

Oh – and the fresh juices are very very fresh, and very, very tasty too.

Of course, there are fabulous canals. Lots and lots of canals.

And lots and lots of bikes.

My mother came to Amsterdam more than 20 years ago. I remember her saying you took your life in your hands crossing the main road in Amsterdam.  There are so many bikes on the bike tracks, then a road with buses, cars, motorbikes, and trucks. Then watch out for trams. More so when you are in the middle of the road, and you have to do it all again – just the opposite way!

Even bikes parked in a funny way!

And then there are canal boat rides and tours.

If you go to the Visitor Centre opposite the Central Station you can do what we did and get a City Card.

We went on a See Amsterdam Canal Tour and it was great.

There are two different lines you can choose, and so we chose the line that was going right by the houseboat we were staying at that night – so we could have a sneak preview!

It was quite sunny and Explorason fell asleep.  But I was up and about taking a load of photos.  It can get quite warm, and I got sunburnt, so bring sunscreen and a hat, even on a mild day.

Of course, there is Anne Frank House.  We didn’t have time to go in.  I do vaguely remember going through when I was here – way back when I was 21 years old.  So due to lack of time, we skipped this. But best to get here early if you want to go. The line up can be hours long. The day we were there it was only just spring and it was a 3-hour wait.

There is loads of modern architecture to see too. Like the Eye Film Centre.

And of course, there is the Cafe Culture.  Perfect for sitting in the sun and watching the canal boats glide by.

If you drink too much, you’ll think the odd building is on a lean.  This one is!  And Explorason had fun trying to act like he was pushing it over.  It is a quaint little bar you can pop in for a drink at.

In the old days, they paid taxes on the size of land they bought. People went up, not out.

There are so many fun stores. We liked these a lot. We wandered in and out and tempted ourselves with many of their unique items.

Fancy a giant rubber duck? You can get it n Amsterdam. Bet you didn’t know that!

Or if you need a cat bag. Yes, you can get that too – in Amsterdam.

But I think the best thing about Amsterdam is the canals.

So book yourself a night, or two, or three and stay on a houseboat like we did – you can read about it here.

If you can’t do that, then how about an evening dinner or cruise?

And if that is not your thing, then go to one of the outdoor cafes or bars.

Sit as the sun goes down, and listen to some music and sip a drink – and just watch the world float by.