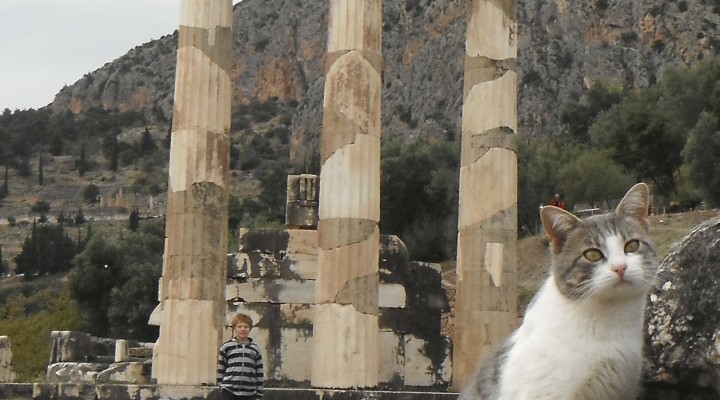 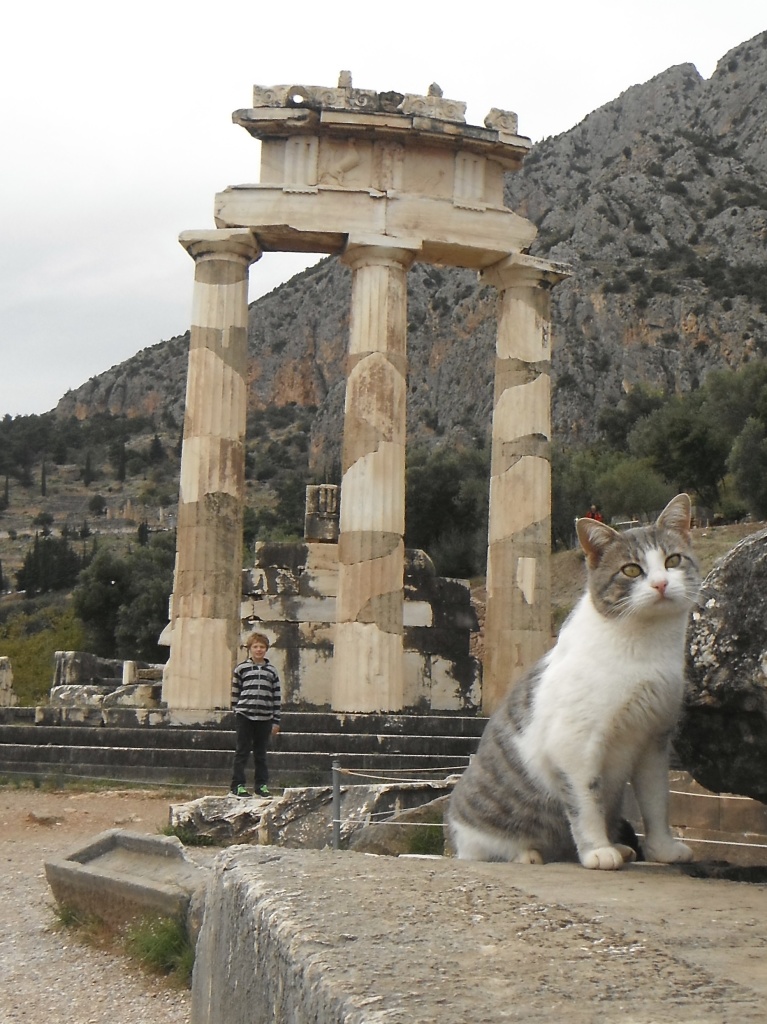 Exploramum and Explorason – The Temple of Apollo – sacrifices were made here

So – where do you seek the wisdom of the Oracle of Delphi?

We have seen this in the movie “My Life In Ruins”,  and we thought it was a stone.

But as we set out on our hunt, we discover we are wrong – very wrong! 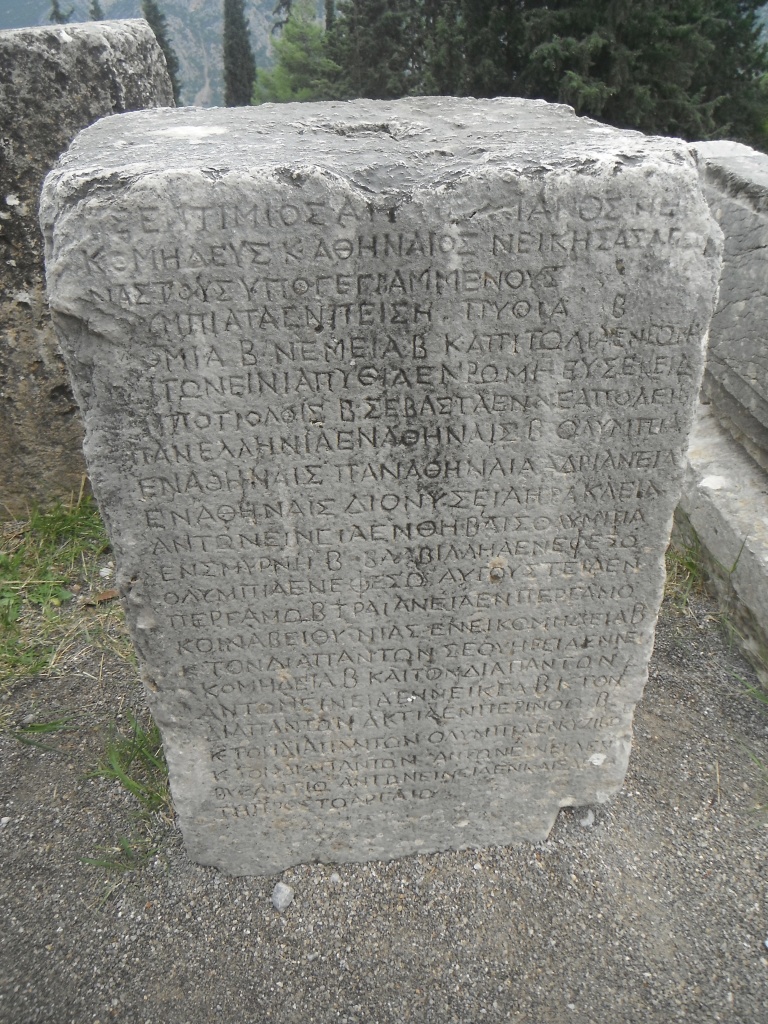 Exploramum and Explorason – one of the stones inscribed at Ancient Delphi

We have left Athens (sadly ) and as we drove through the misty hills heading north, we drive into Delphi, on a bit of a detour to get to Meteora.

When we arrive, we are pleased to meet up with some of our TBEX associates who are doing a tour with Key Tours.

Explorason finds a tunnel and wants to climb through, but soon changes his mind after about 1/2 meter of cobwebs and darkness. We later learn this could be an entrance to the Oracle of Delphi area – but so many stories are around the place – we will share some with you. 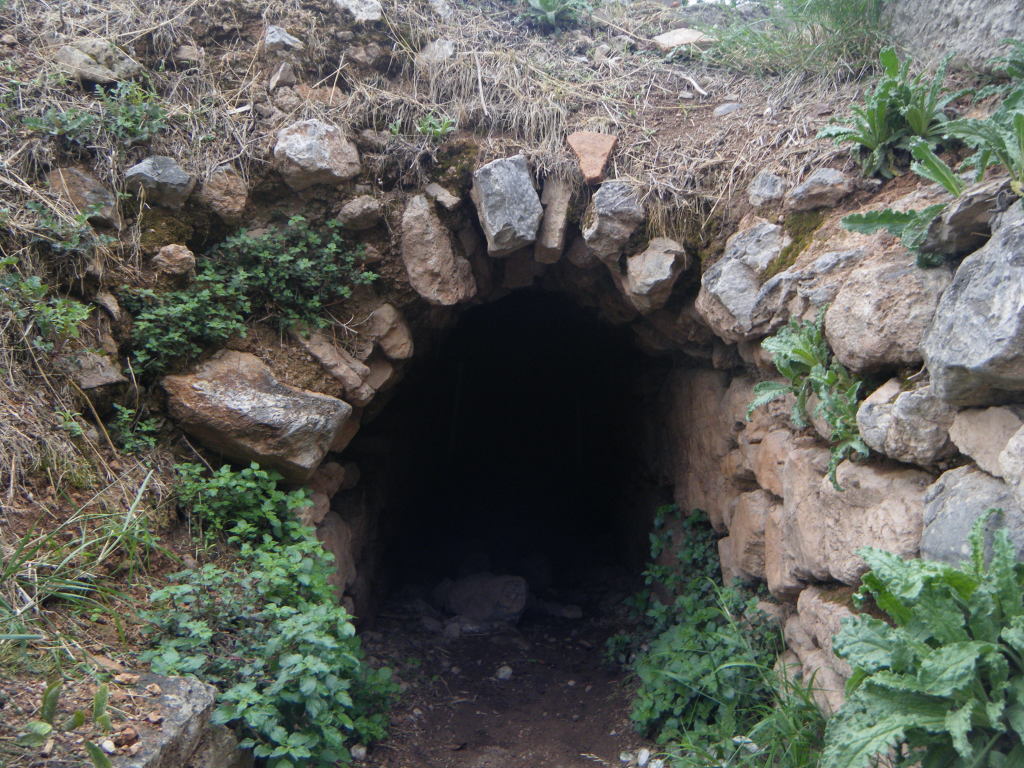 The area is separated into two sides by the main road that passes through.  Ancient Delphi main area is to the right as you head away from Athens.  This is the front area of the treasury. 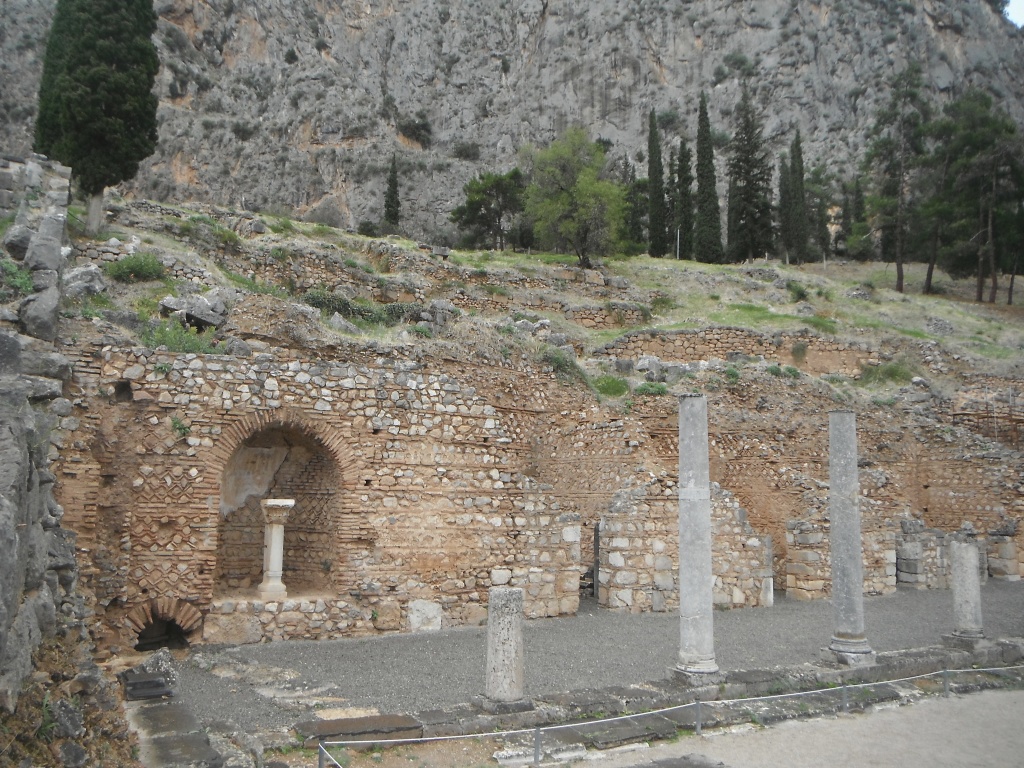 Exploramum and Explorason – the treasury side area

Here is the main area of the treasury and it has been restored beautifully. 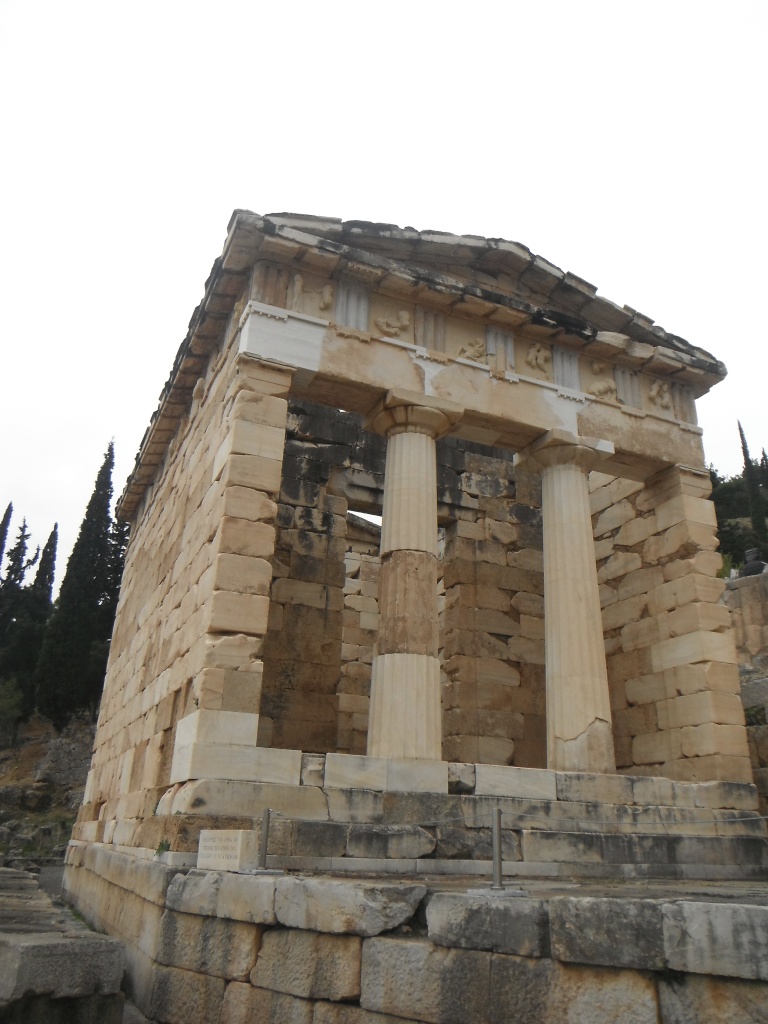 Exploramum and Explorason – the Delphi Treasury

Here is part of the Theatre area, but most are closed for renovations. 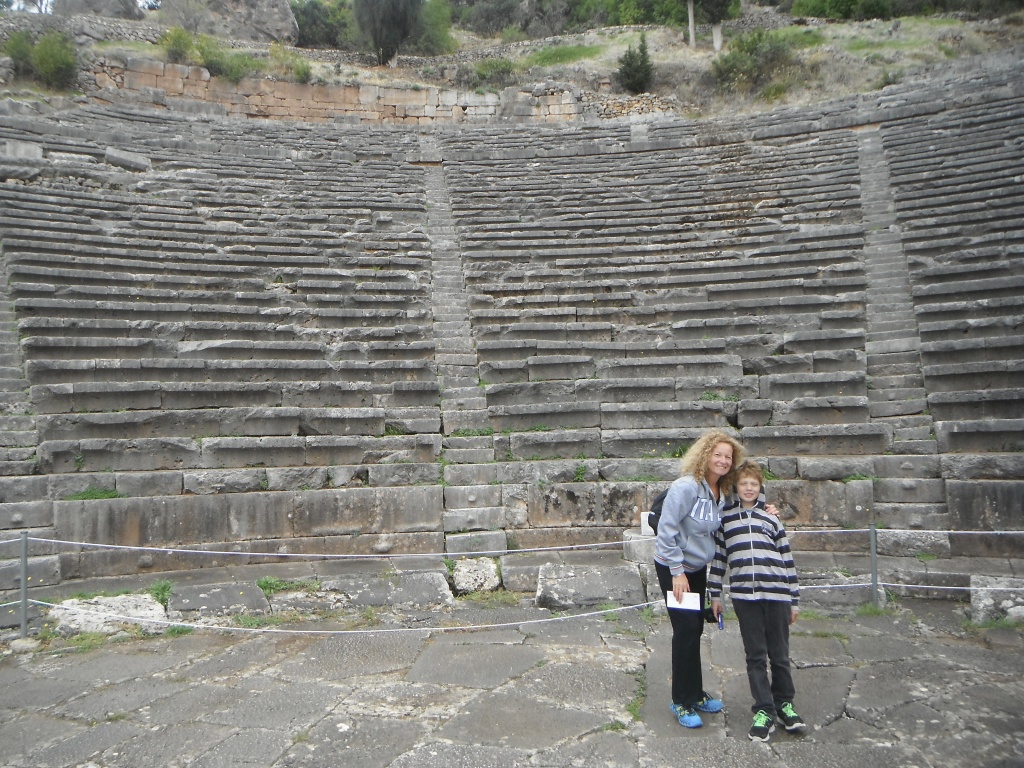 Exploramum and Explorason – the Theatre area

So as we hunt for the Oracle Stone, we discover it is not a stone. It is an area. An area under here – somewhere.

So – time for a bit of history.

Delphi is perhaps best known for Oracle at the sanctuary that was dedicated to the god Apollo, around 8 Century BC being where they first found artifacts dating back to. But they say it dates back to 1500 BC, or even 2000 BC.

They have found pottery and bronze pieces here.  But, neither the range of objects nor the presence of prestigious ruins, will ever prove that Delphi was a focus of attention to these false god worshippers.

But with the vast quantity of highly valuable goods, found in no other mainland sanctuary, it certainly does encourage that view.

Apparently, Apollo spoke through his oracle, and his goddess sat on a tripod seat over an opening in the earth. When Apollo slew the Python snake, the writhing body fell (according to legend), and fumes arose from its decomposing body.

So we ask why do they think Delphi was so sacred?

History says, it is because it had methane gas leak, and if you breathed enough of this methane gas, it would intoxicate you, and you would say mysterious things whilst you were “high”.

There was a story around Delphi that the “crack in the earth” was first discovered by a goat farmer, who saw that whenever their goats got near this place, they started acting in a really weird way.

Then the teenage goat keepers tried it themselves until the adults stopped them.

People built the Temple of Apollo at Delphi directly over this crack in the earth.

So supposedly, when you wanted to ask the god a question, the priestess went right down into the basement where the crack was, breathed in the gas, and answered your question. 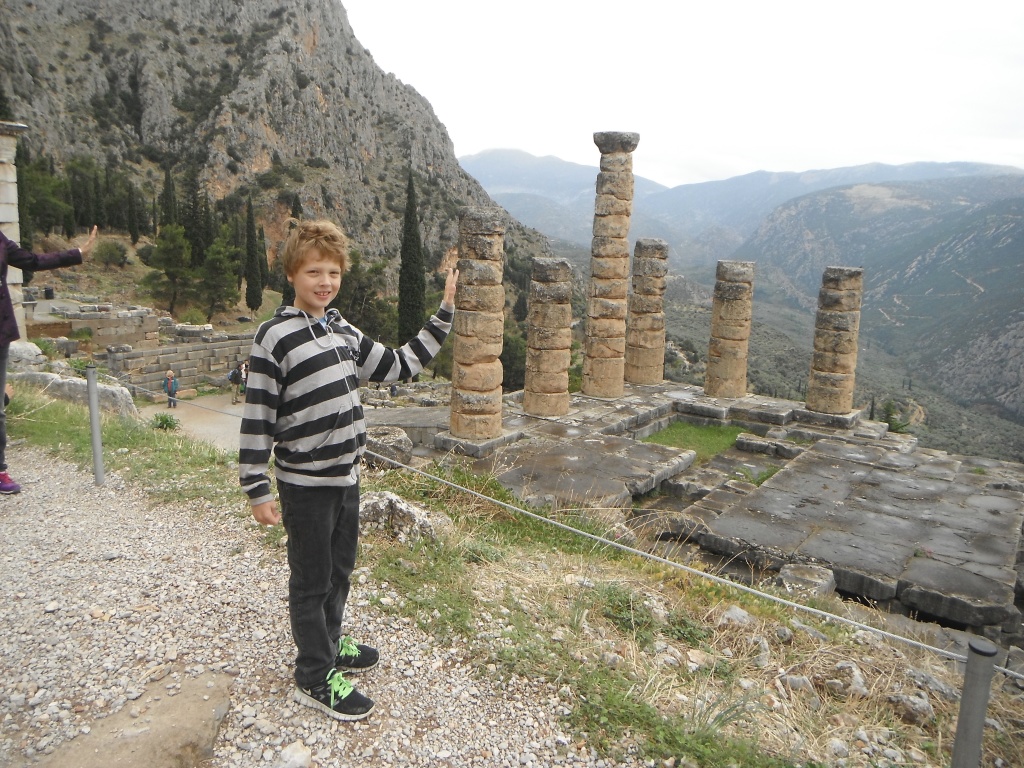 We head across the road towards the Temple of Apollo – the most photographed of the area. 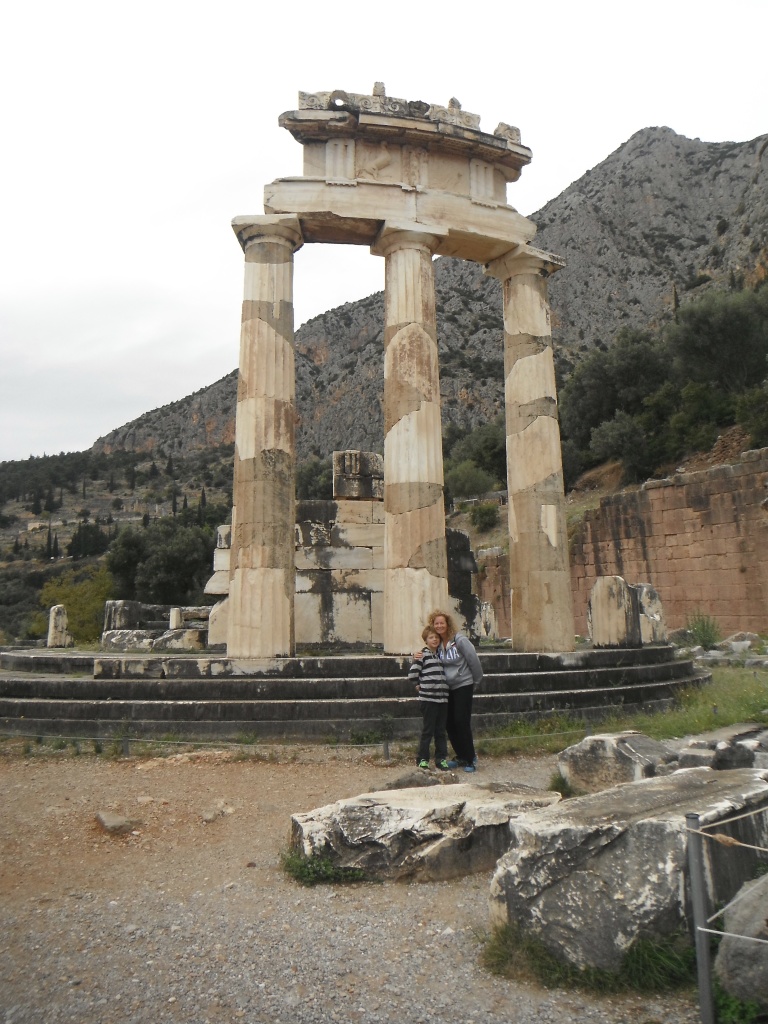 Exploramum and Explorason – The Temple of Apollo

We are pretty cold, so we race back to the car and it is already after 2:00 pm.  We have to drive to Meteora which is at least 3 hours.

As we start, there is a bet between us for a Euro for who sees snow first.

For once, I really hadn’t seen it, and really wasn’t expecting it.

We stop the car and have a few photos.

We head to Meteora and it is just incredible – I will blog on our amazing time there separately. 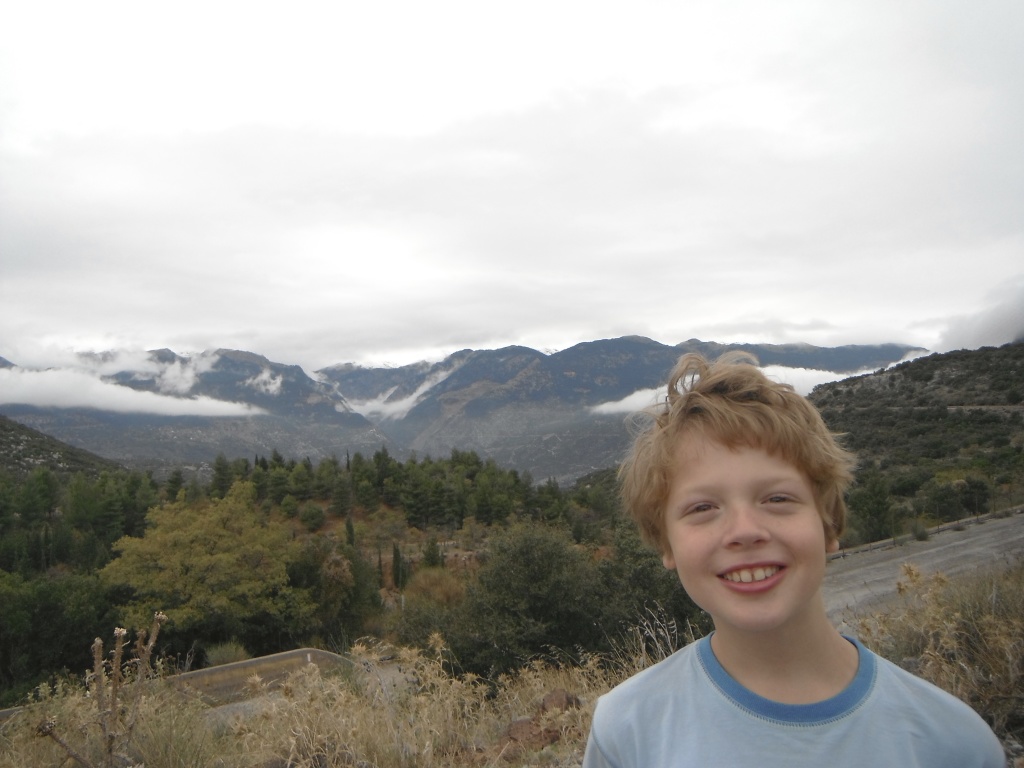 Exploramum and Explorason – snow on the way to Meteora

One thought on “The hunt for the Oracle of Delphi”