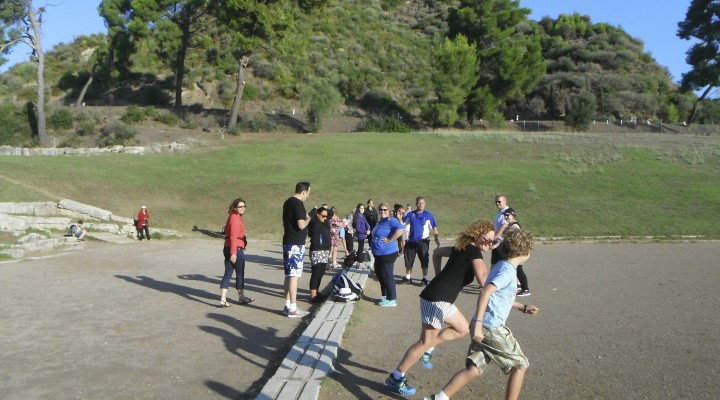 We are up early and packed today armed with an Olympic and Greek Flag we had purchased in town the night before. We are ready for our own Olympics, just like the movie ‘My Life in Ruins’ (which we had enjoyed watching here the night before).

Breakfast is only served at 7:30 a.m., so I have a quiet time of thankfulness with a nice cup of coffee out on our balcony overlooking the Olympia Church in the square, as I wait for the hotel restaurant to open, as it is only 7:00 a.m. The peace and tranquility were astonishing.

We ‘fish out’ our running shoes from the car, and pack our overnight bags and cooler bag away, and we are at the Ancient Olympia site, just after it opens at 8:00 a.m.

We have the place to ourselves and take some great photographs of our Olympic and Greek flags.  Next thing an official comes over and tells us signs and flags are banned and deletes ALL our photos from the camera. Explorason starts to cry.  This is not the start we wanted to our day.  She has NO valid reason when we ask her why except it is a UNESCO ruling.

Explorason is so upset, he just wants to leave, so I sit and have a talk with him about obeying authority.  A hard thing for a nine-year-old when the authority can’t validate their reason, but it is ‘the rules’.

I then find it quite amusing that we know the rules are no climbing or sitting on the archaeological items like walls and pillars, yet all through the park, the non-uniformed officials SIT on these very same items.

Sometimes it is hard to be a parent and calm a child when he can clearly see the rules are one-sided.

However, we decide it will not ruin the experience.

I suggest we start again, but by then, coach loads are pouring in, and we no longer have the place to ourselves. 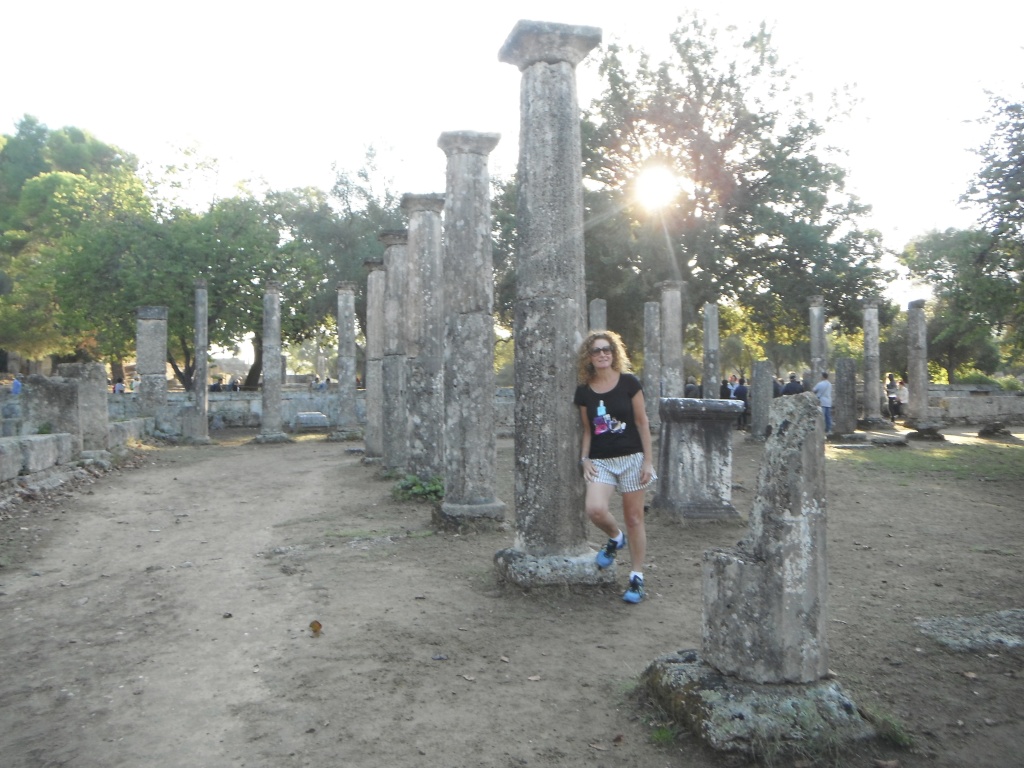 Exploramum and Explorason – ‘ Take 2’. Photos after the flag pics are deleted by staff

Still, there are not many there, and so we do have a fairly good chance to take photos without hoards of tourists around. 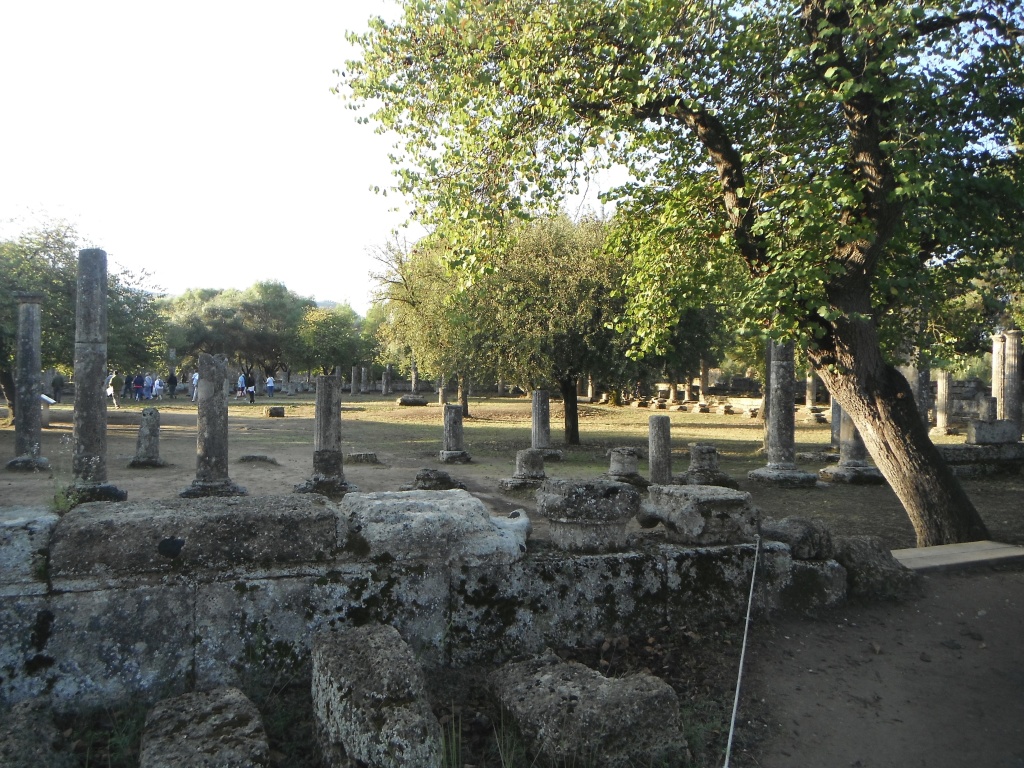 The sky is blue and forms the most incredible backdrop. 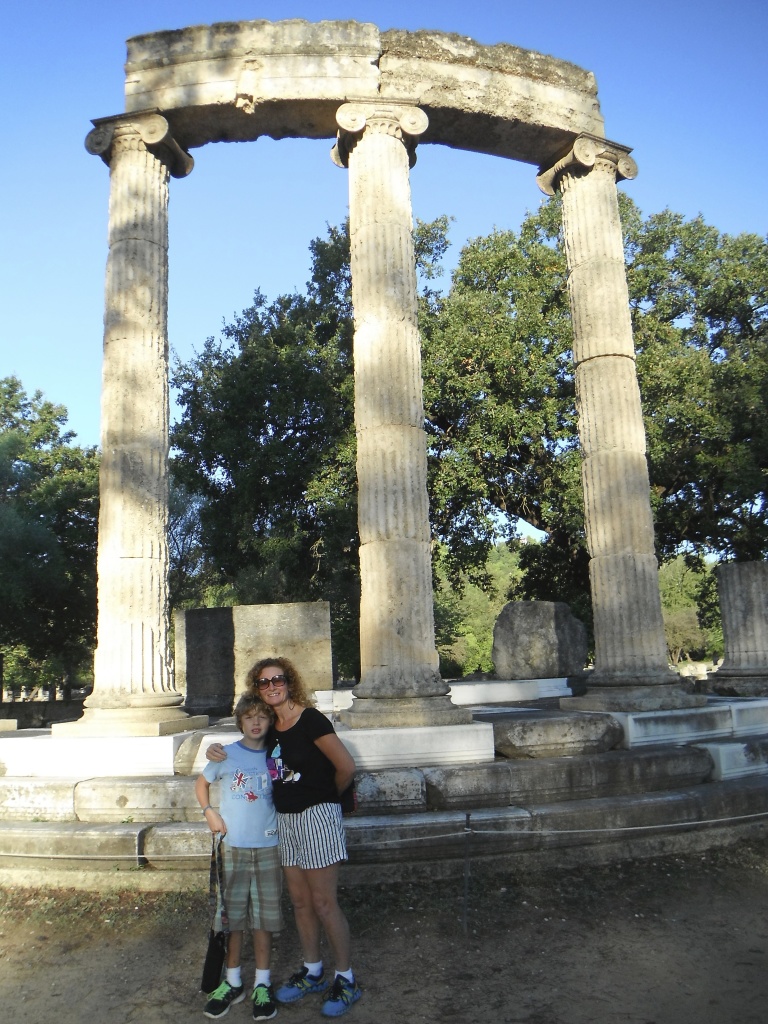 We head to the arena area where the athletes once entered for the very first Olympics in times before Christ.

We meet up with some Australians who we had chatted to in the street the night before, and they decide to photograph us.

A lady comes and tells us that the competitors would have placed their front foot on the first line, and their rear foot on the last line, so we set ourselves up.  A very loud man enthuses us and calls us to ‘ get ready’.

And we are off.  Incredibly the visitors around us start to yell and cheer us on. 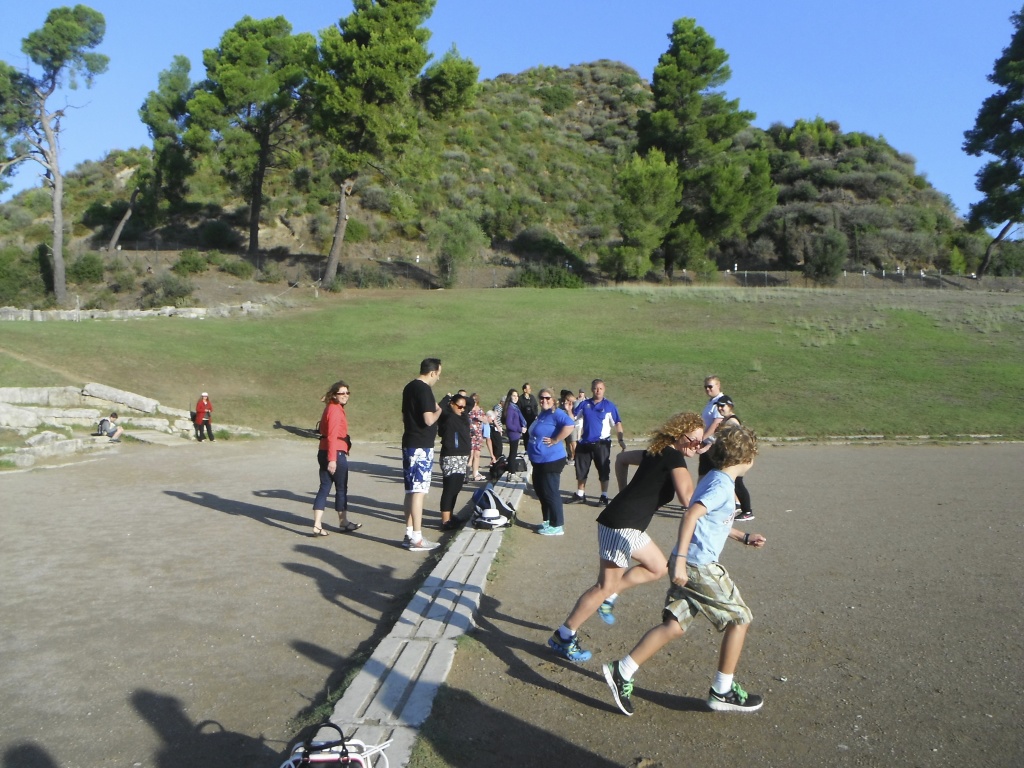 Exploramum and Explorason – competing in our own Olympics – ‘ready, set, go’

We race the full length of the track, over the line, turn and race back.

Of course, Explorason is taking the lead. It is important he wins this race. 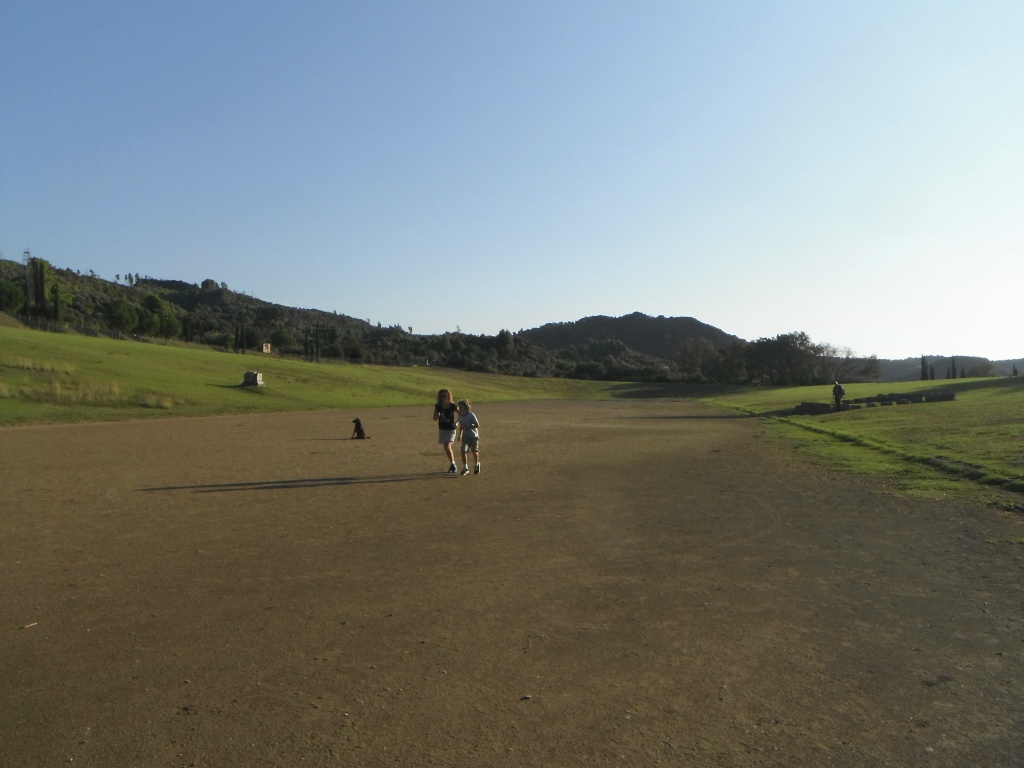 And he is first over the finish line. He lies on the ground very dramatically and we huff and puff. Still, at nearly 53 years old, I feel good! 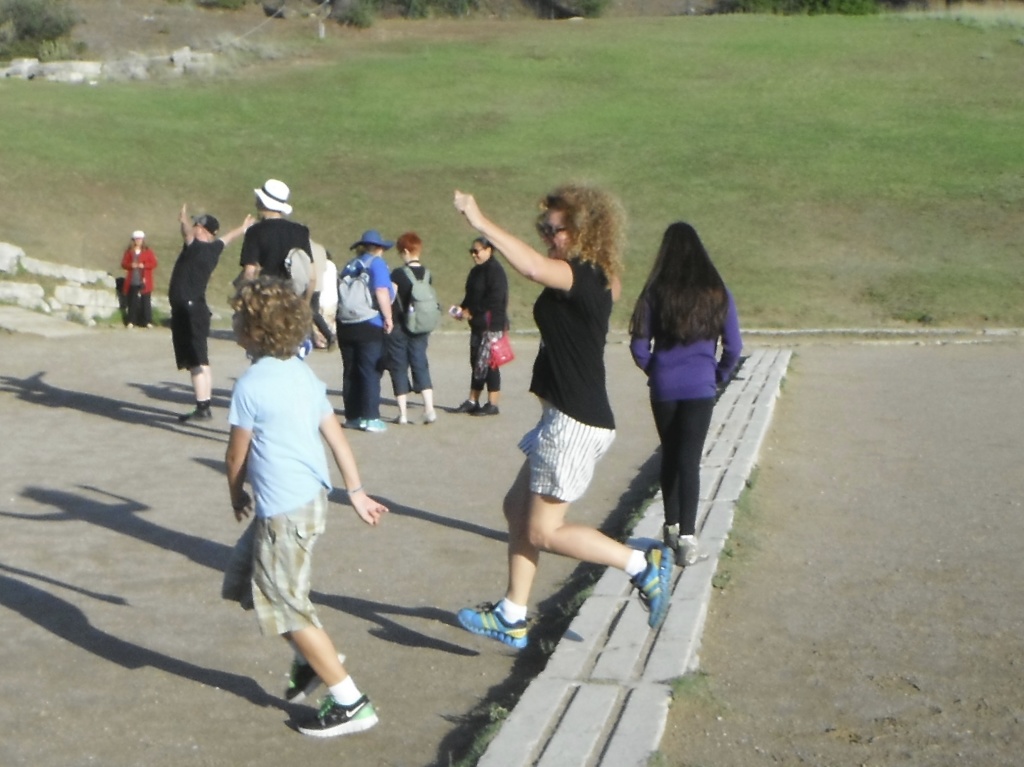 We then go to where they first lit the Olympic Flame.  It was only started in the 1940’s, and as most of you know the war delayed the Olympic Games then.  It was lit with a magnifying glass and a rock, and behind us is this very rock. 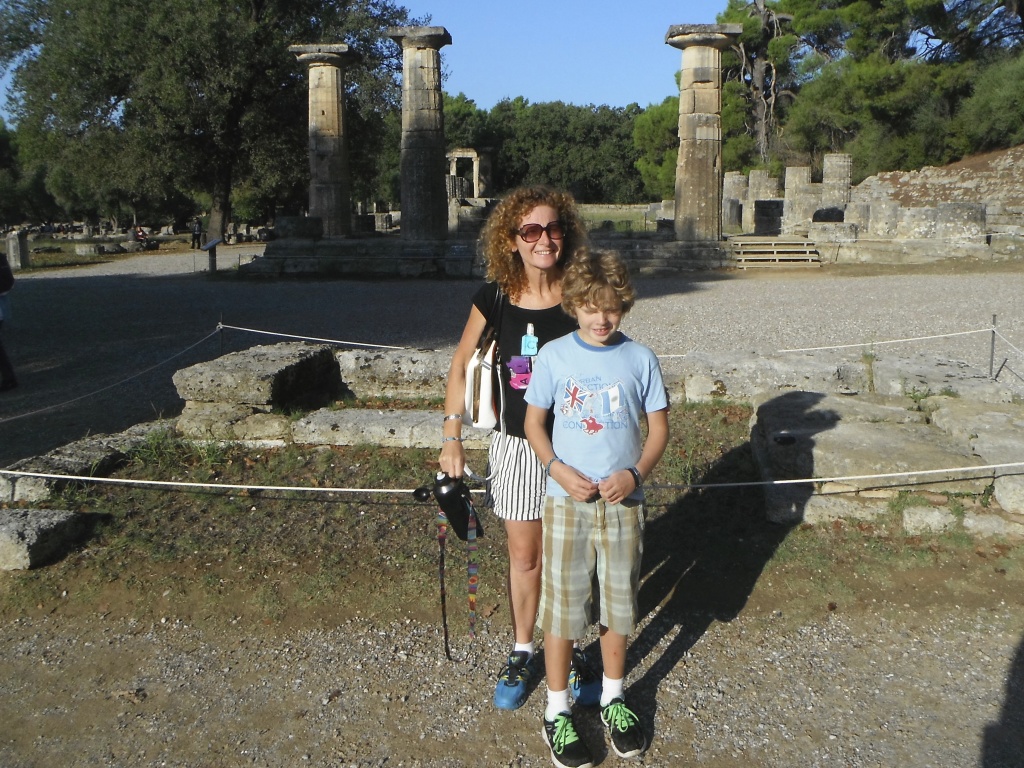 Explorason finds the “first piece of Lego” he decides !! 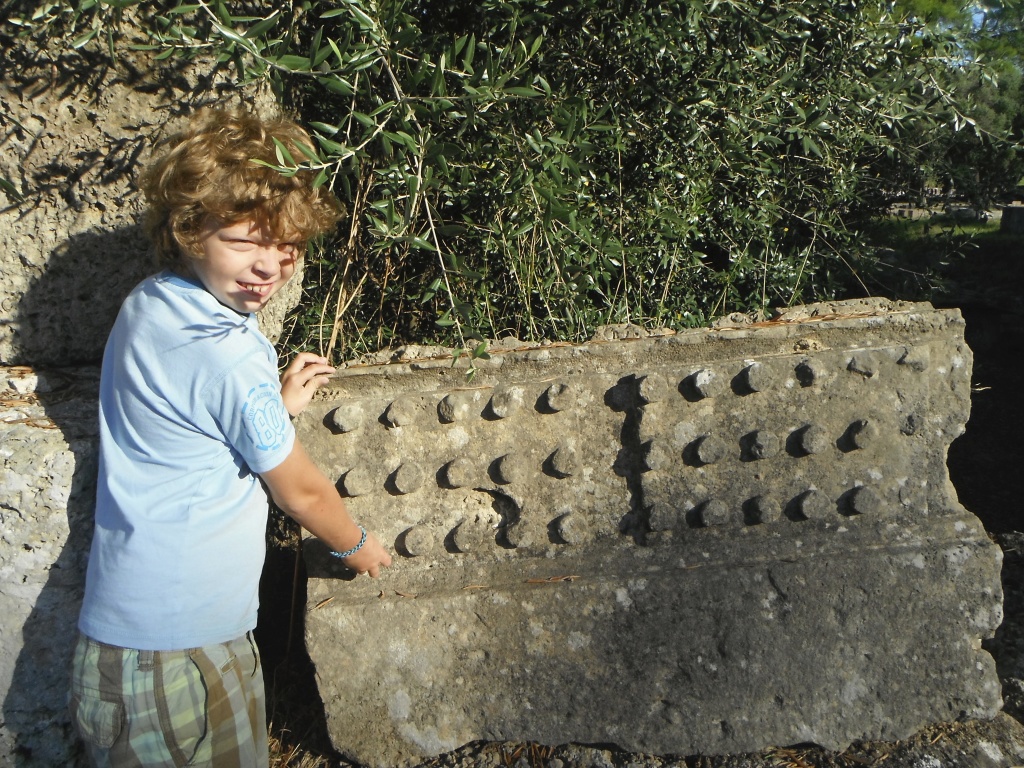 We look at the bases of pillars and see they always have a square where they would have used a metal rod or stone block to hold them on top of each other. 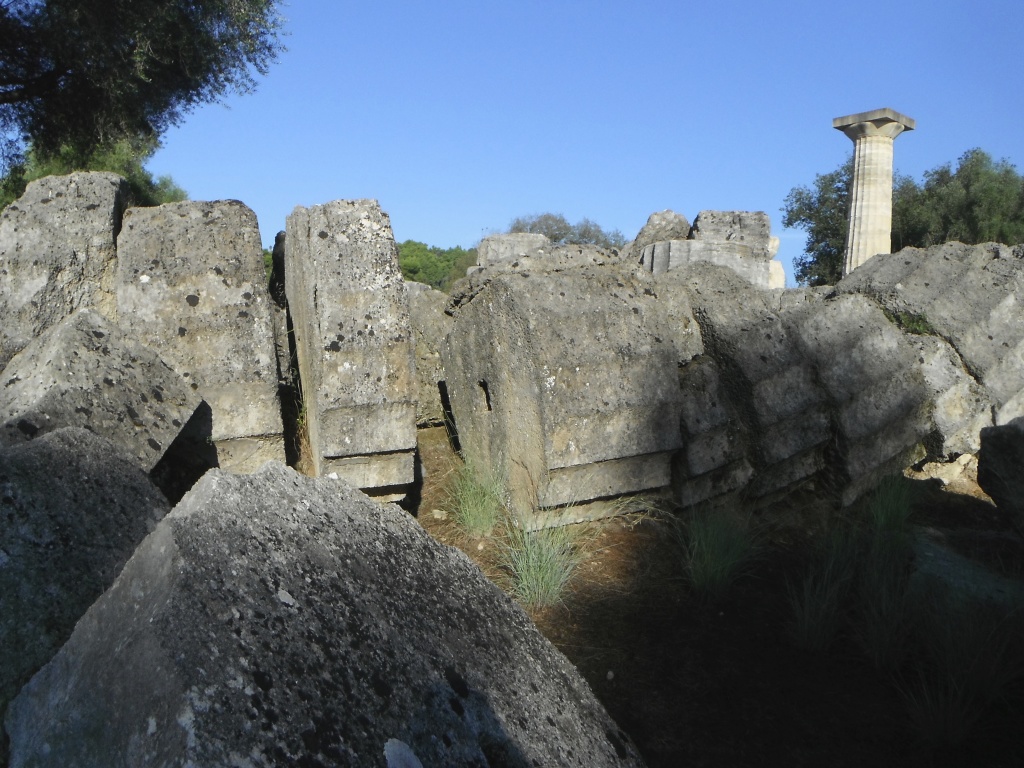 Exploramum and Explorason – stack of pillars

Many think all the pillars were formed in one stone, but here in Greece, you will find numerous pieces of carved stone that fit on top of each other. 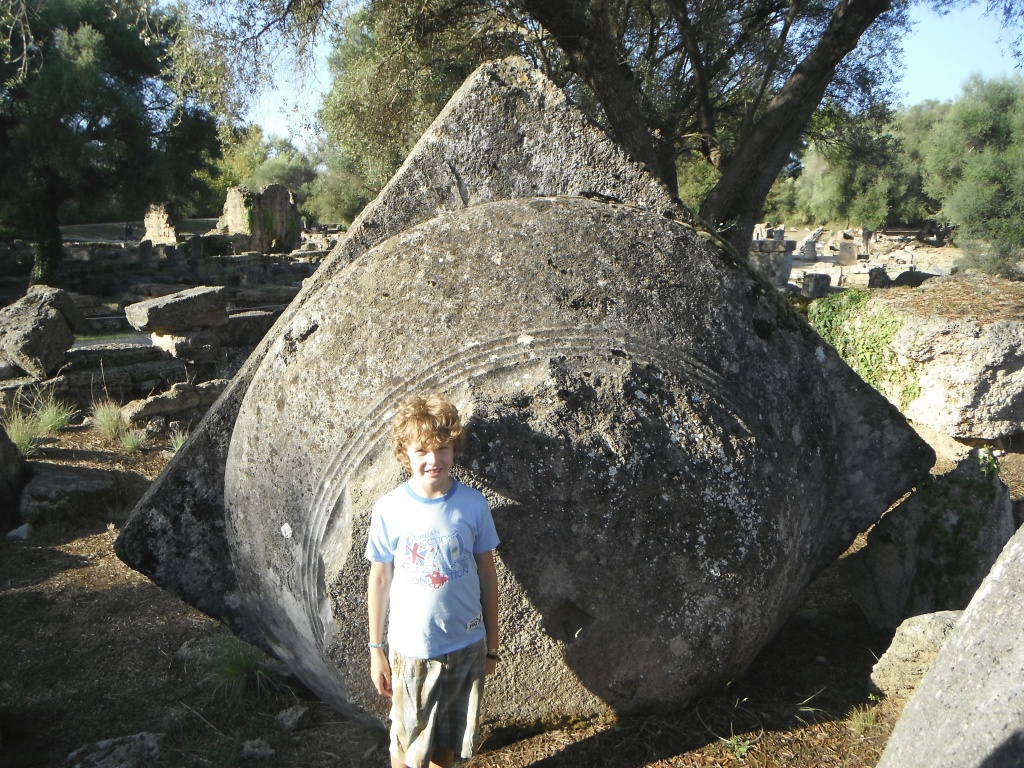 Exploramum and Explorason – huge pillar base

We also find a lot of stone and pieces of shell. Yet we are quite a distance from the sea. You can read about it more here. 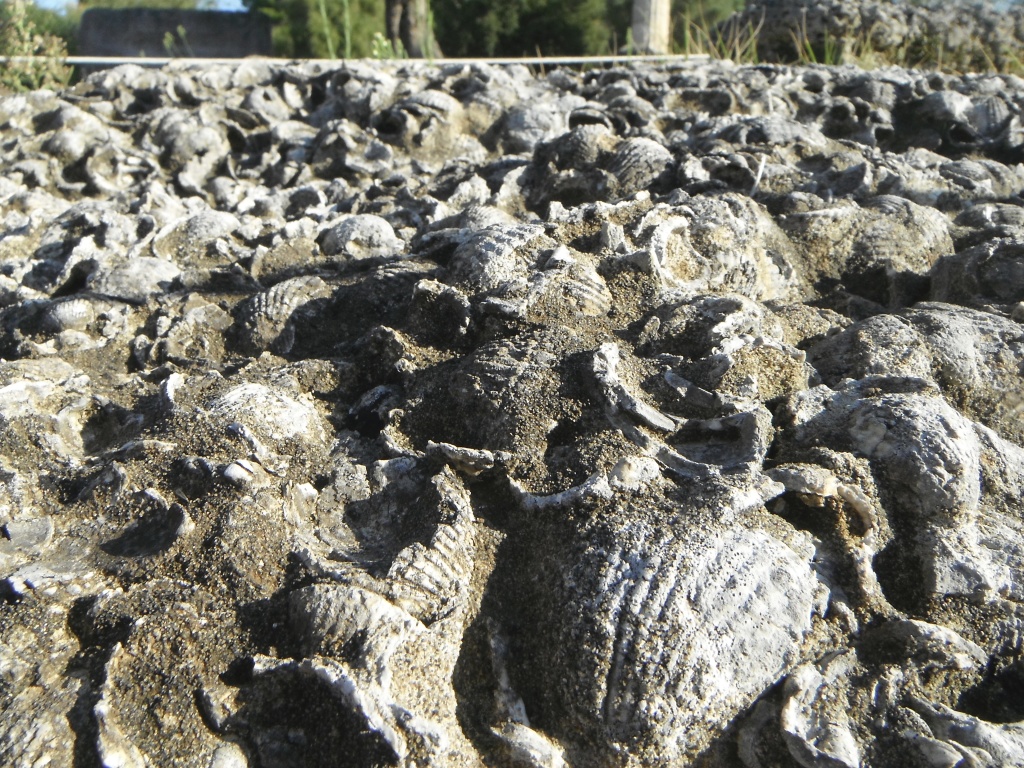 Exploramum and Explorason – shells in some of the rocks and blocks

They are pretty tough, but all around pieces of shell are on the ground if you look. I guess thousands of pairs of feet have walked over these stones over the years and the elements of nature have also chipped and broken them. 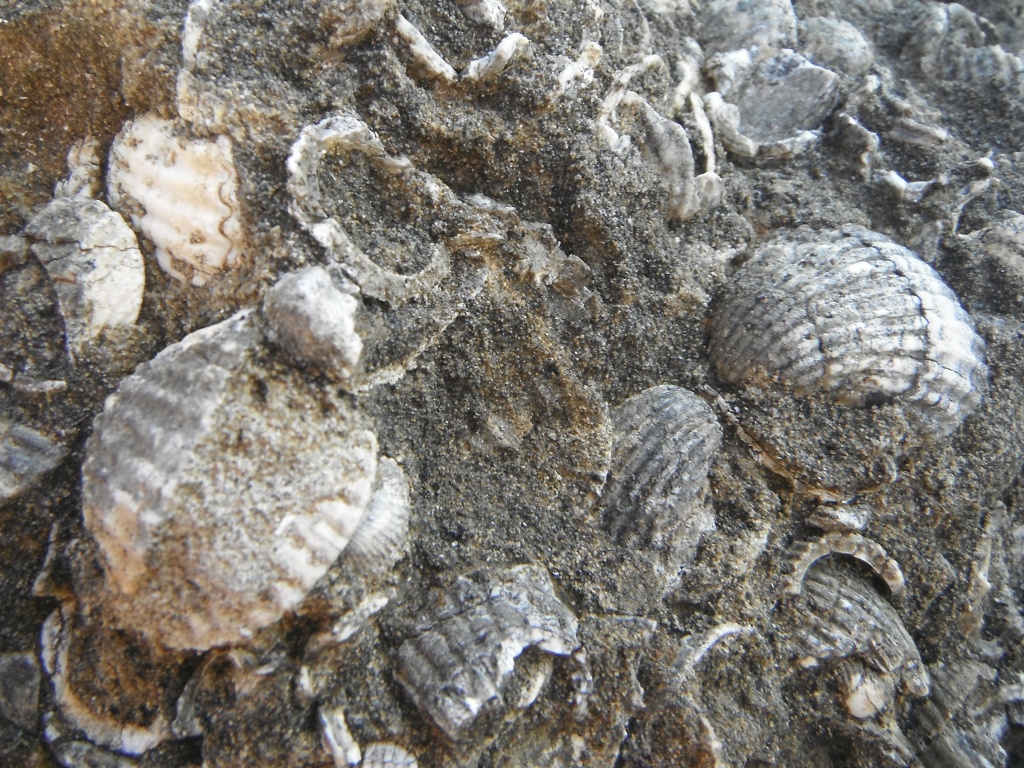 We take time with our world schooling to talk about how things happened 2000 odd years ago. How they had to move rocks, and only used primitive tools to make such fine workmanship, like the piece we found below. 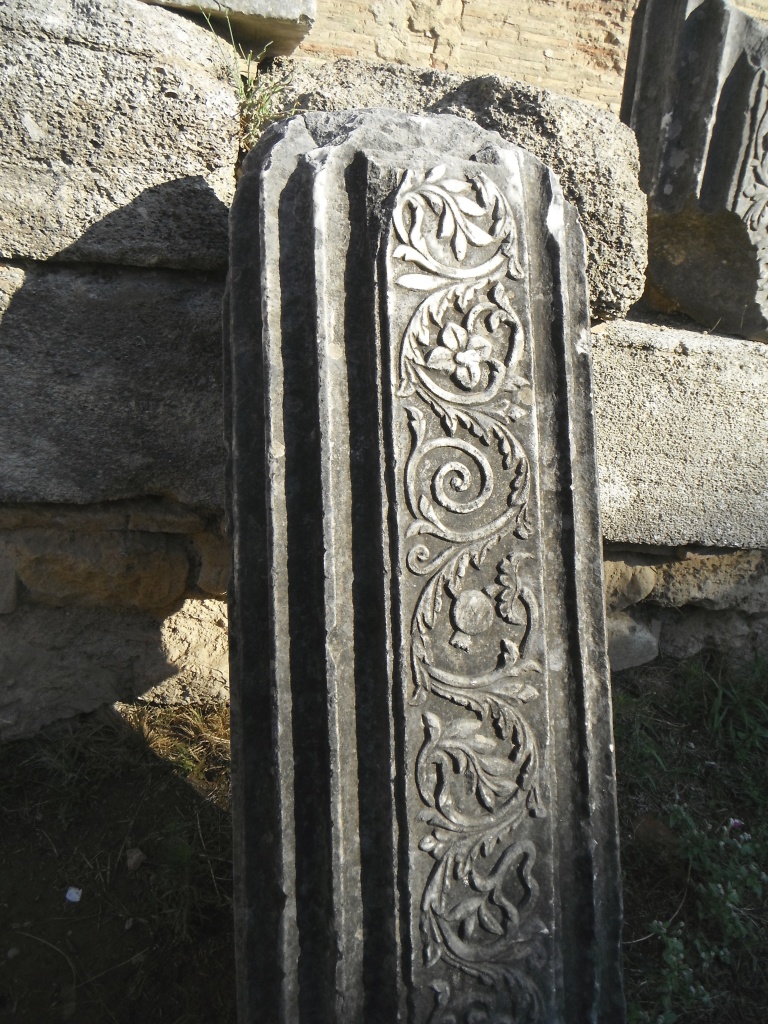 We have a go using rocks as hurdles; we climb, and a weave and Explorason wins again! 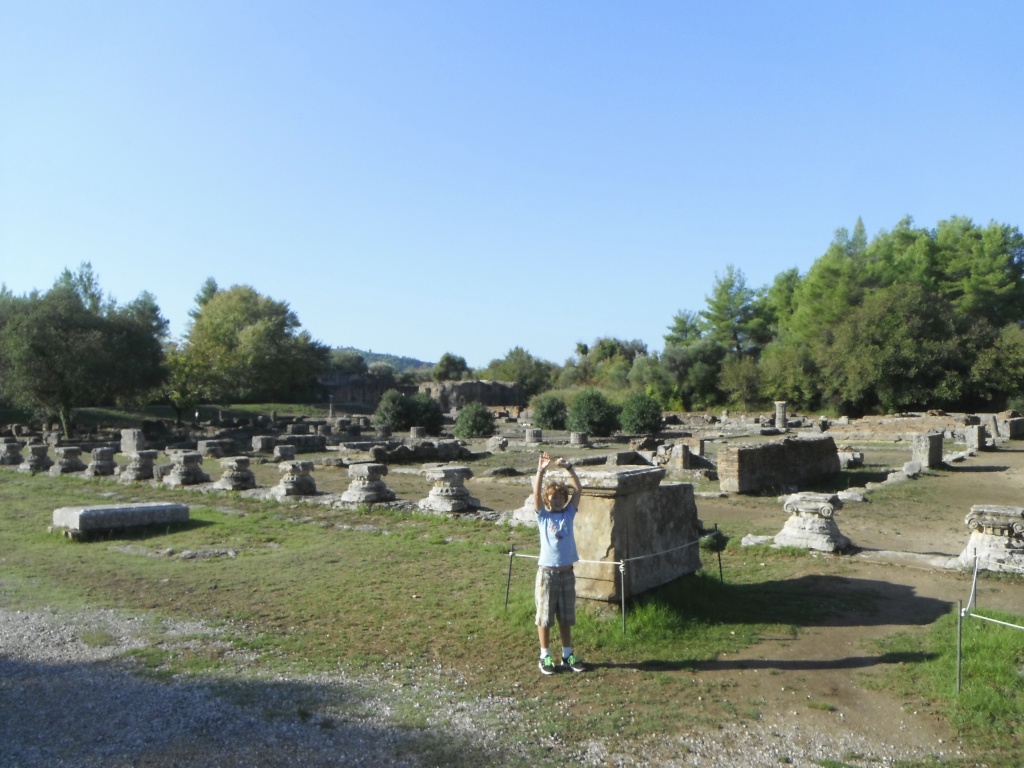 Exploramum and Explorason – our own Olympics

We then head over to the area where we could wrestle, but we decline on this event. No javelin or discus throwing either. 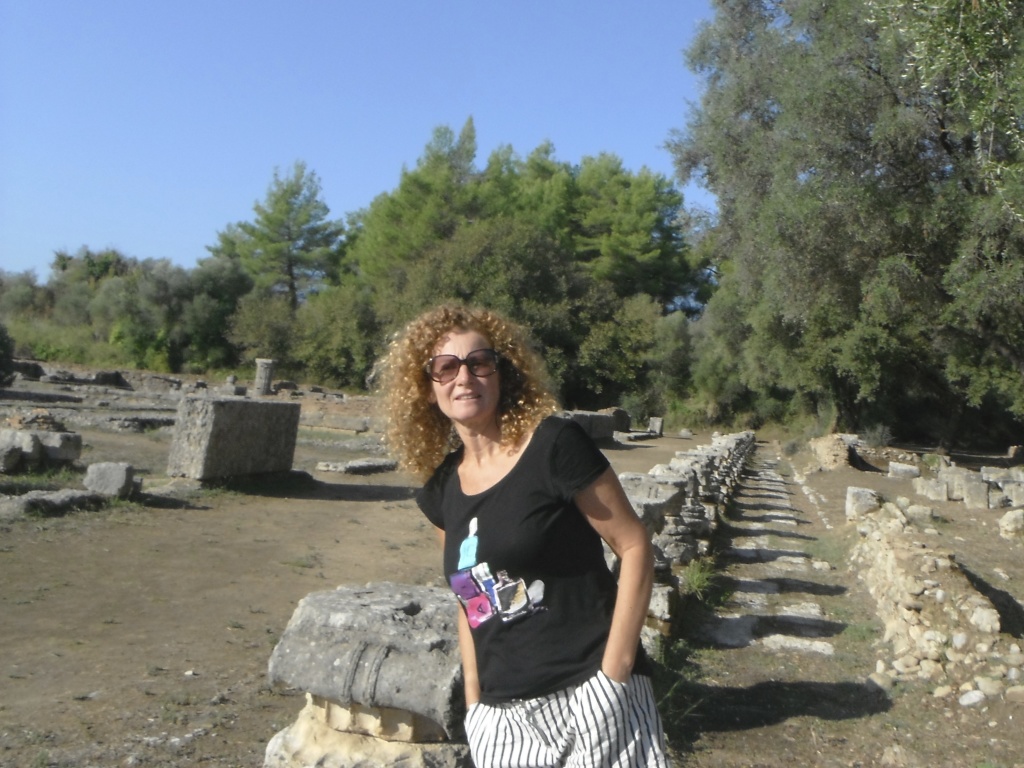 Exploramum and Explorason – we head to the wrestling area

But we decided to try the pillar weightlifting as a team event. Not so easy, we decide. 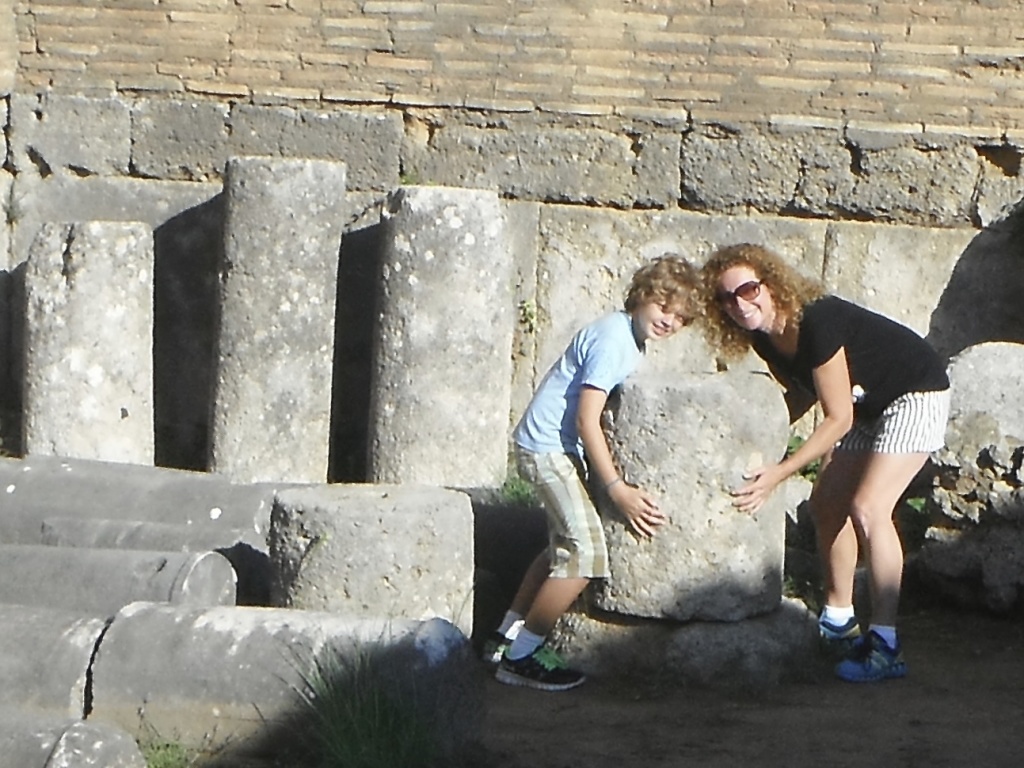 Exploramum and Explorason – weight lifting – our own Olympics

Explorason tries out his brute force and strength like Samson. 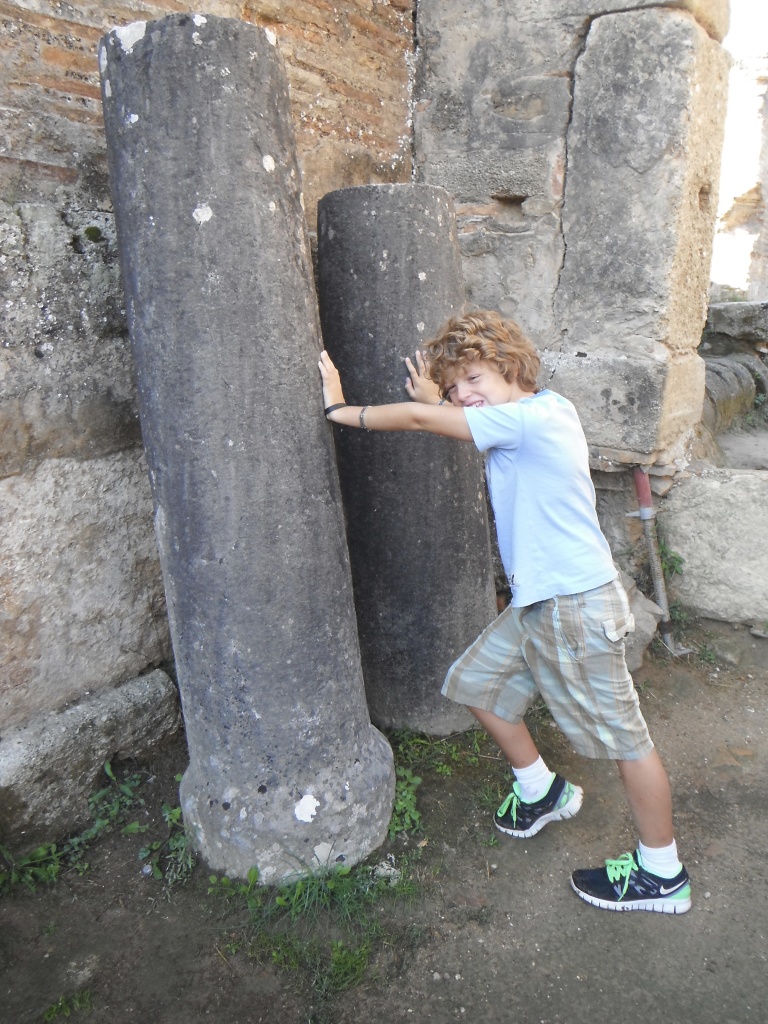 It is time to leave. As we do so, about 10 coach loads of tourists come from the cruise lines. We are glad to be leaving, and so in stubborn defeat, we get out our flags once we have left the Ancient Olympic site, and give them a good wave! 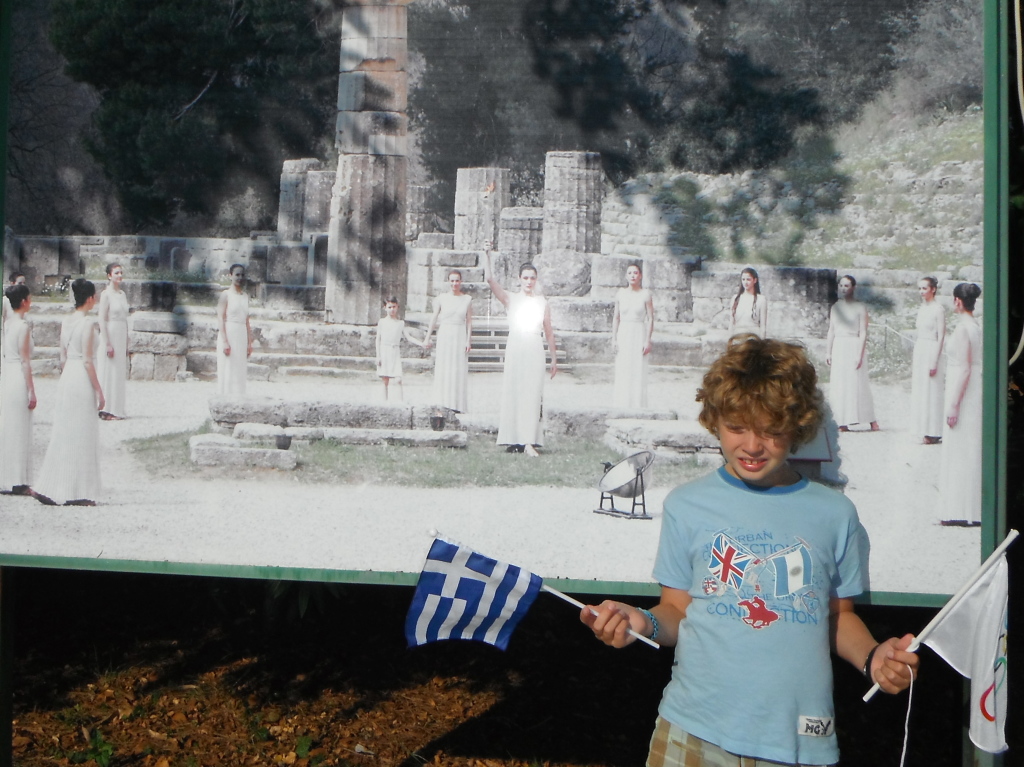 Exploramum and Explorason – we finally wave our flags