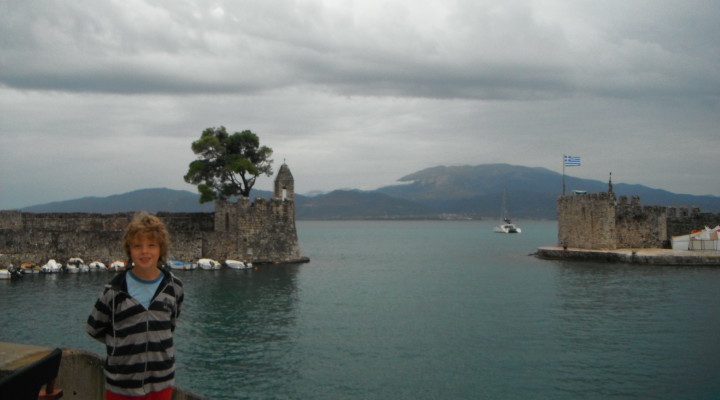 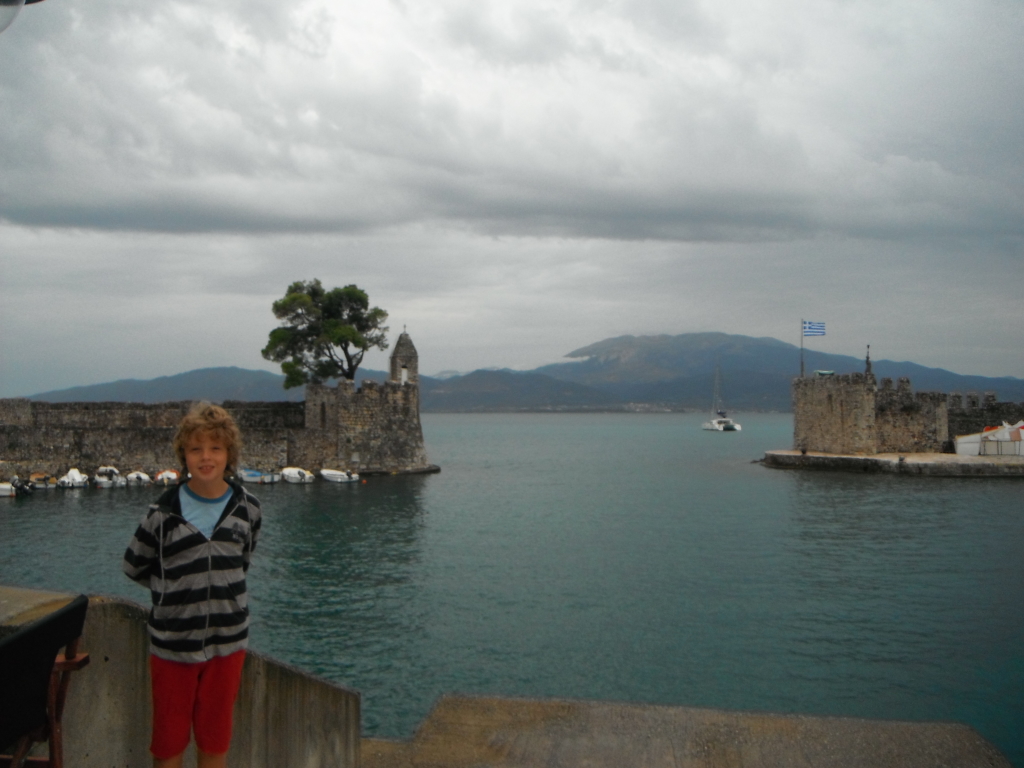 Exploramum and Explorason – Náfpaktos Greece, entrance to the port

‘Rain, rain go away, come again another day’. We have been saying this since we stayed in Paleokastritsa on the Isle of Corfu four days ago, and yet it continues.

We had taken the ferry from Corfu, and I am frozen. I sat looking like a mermaid on the ferry with Explorason’s jacket used as leggings and socks to warm my feet. And a Greek coffee to warm my insides. 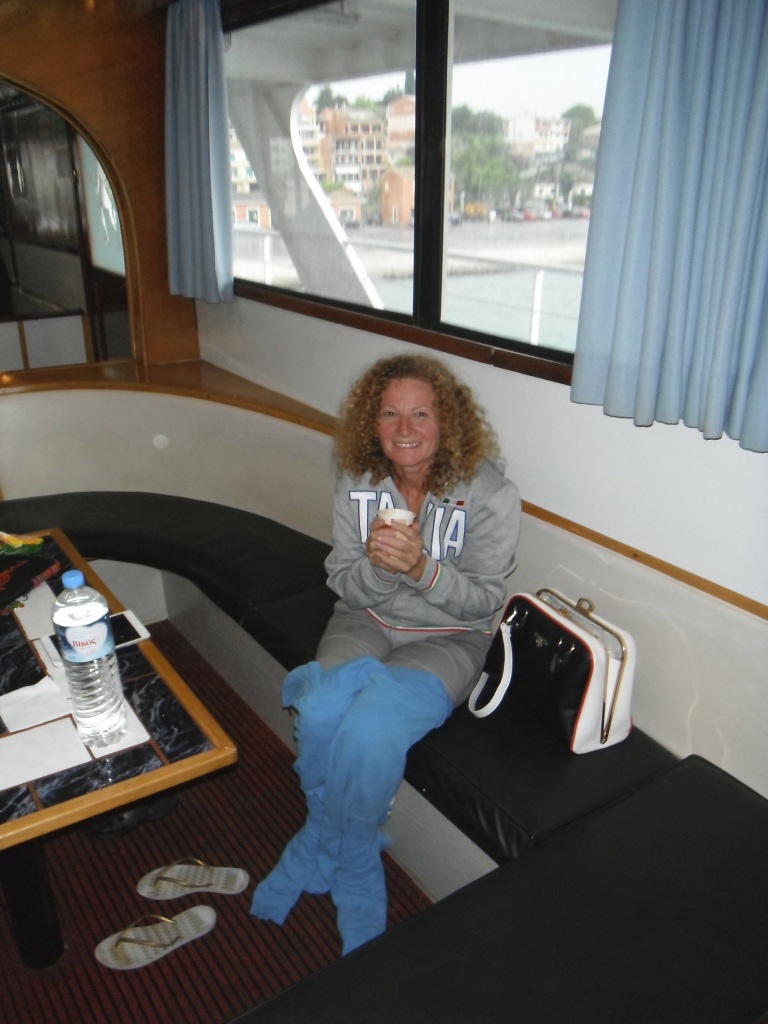 Exploramum and Explorason – ferry from Corfu

(Folks going to and from Corfu, and the ferry is a half price some days – so check that out too.)

As the weather was so foul, we decided to head south. It was pointless to see the ruins in the north of Greece with this weather, so we spent the night in Preveza. It was actually an apartment right on the beach, but we wouldn’t have known with the rain. If it was sunny, I think this town would be worth a night’s stay and a look around, as it is nice along the waterfront with a few restaurants, and had a touristy feel to it.

In fact, I have never driven in such heavy rain!  Cars still overtake on double lines, and at double the speed, they should. Not a speed camera in Greece seems to be functional that we have passed so far. Graffiti seems to be sprayed over all the lenses. But this is Greece and they are known for crazy driving and bad pads, and so far both prove correct.

Out apartment in Preveza was a nice place and an equipped kitchen so I could make dinner. We negotiated a cash deal of 25 Euro, (they were closed for the season but were happy with some unexpected cash customers), but the owner kept my passport overnight – so next time I will pay up front to avoid this, as I HATE anyone keeping my passport, and this added to my stress for the evening worrying about it.

By 11:00 p.m. there were quite a few drips from the ceiling, so we madly put away technology – just in case.

And then the mosquitoes started !!! It was such heavy rain that I couldn’t go to the car to get mosquito repellent. But we did have a mosquito repelling candle that did ‘diddly-squat’. I found a folded map of Europe became my choice weapon – as I stayed up most of the night swatting the mosquitoes by the dozen, so Explorason wasn’t eaten alive.

Finally, I woke up at 9:00 a.m. I am sure I had only fallen asleep at around 6:00 am. And Explorason surfaced looking like he had a dose of the measles. So we packed and left – in the rain, with a dotty, scatty child who looked like he had premature acne!

It took us three rounds and half an hour of the town to find the underwater tunnel. And as soon as we were through, the wind howled like a cyclone was about to hit.

Oh, and the rain was so bad!

And so I cautiously follow a semi-trailer for what seems like hours. The road was not too flash, and he would navigate the way well as his rear lit up with 12 small lights.  We did get a glimpse of some rock churches that were cool. 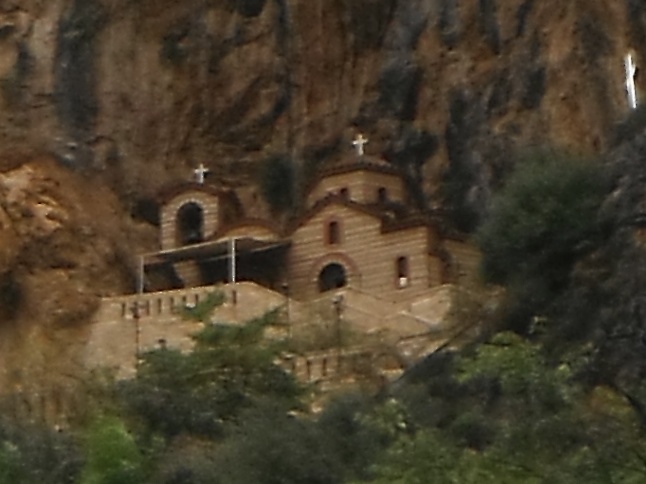 We finally arrived at a small coastal town – Nafkaptos, that friends had recommended to us. We drove around and found ‘Pansion Aphrodite’ right on the seafront.

We negotiated a deal of twenty-five Euro a night for two nights. Seeing it had a fridge and a balcony with a side sea view and we were able to watch the car, I was happy. 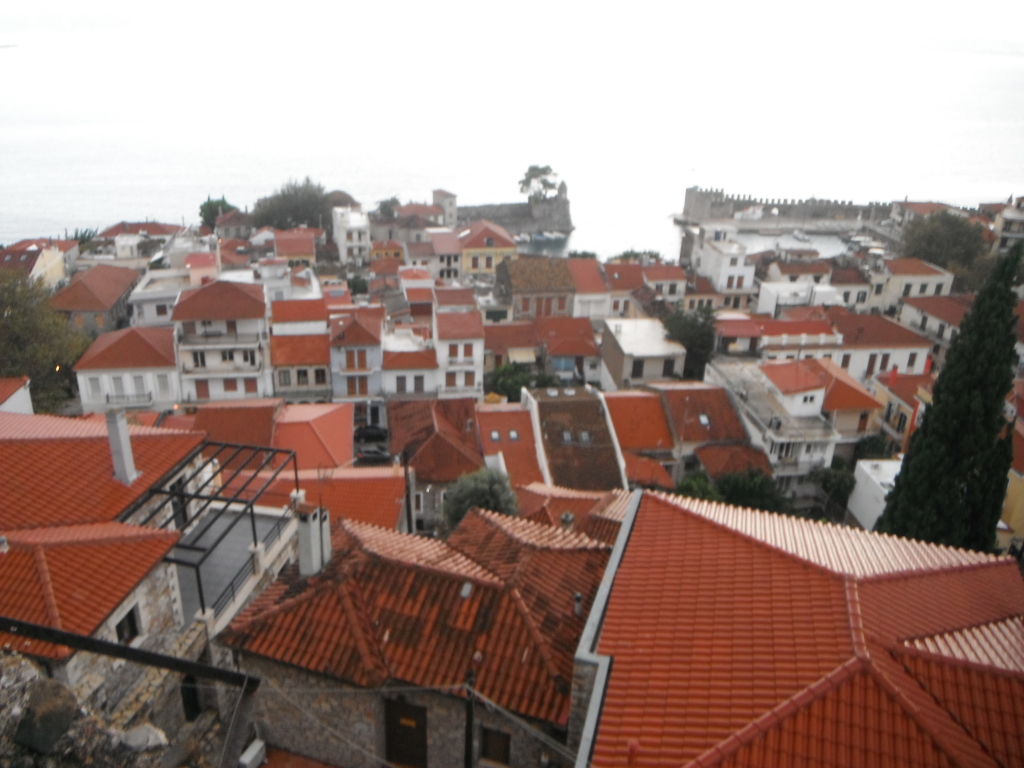 The rain stopped and we went for a walk and discovered how quaint this little town was. It has a sheltered port and was the place of a famous battle against the Turks. 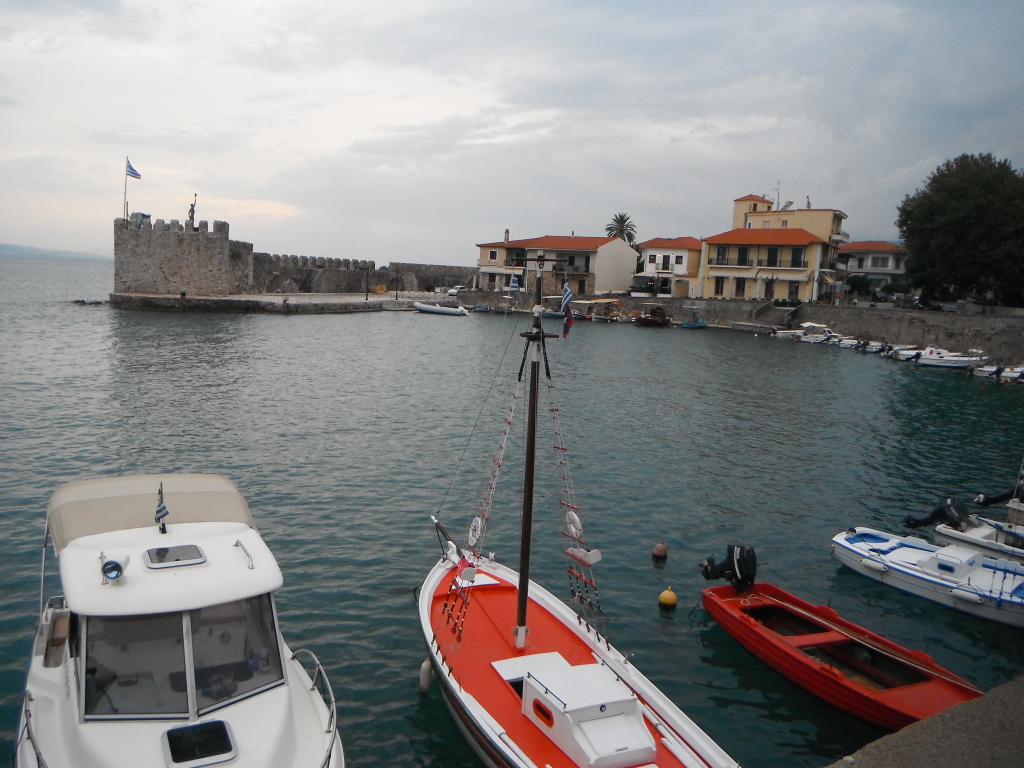 Exploramum and Explorason – Náfpaktos Greece, a beautiful place to visit

The next day the rain was still heavy. By 4:00 p.m. it stopped and we walked up to the castle, but it was locked up. Three-quarters of the way down, it started to rain again. In fact, we ran as we thought it was about to hail. 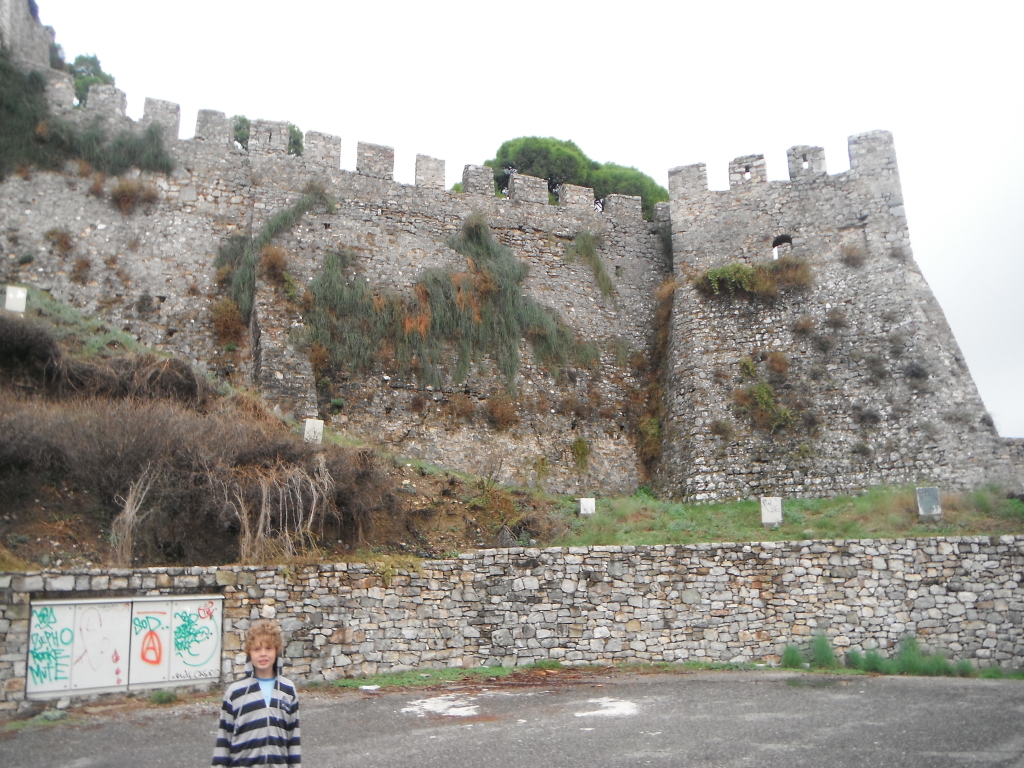 We also visited the clock, the Turkish baths, and a few other ruins while we were up there. 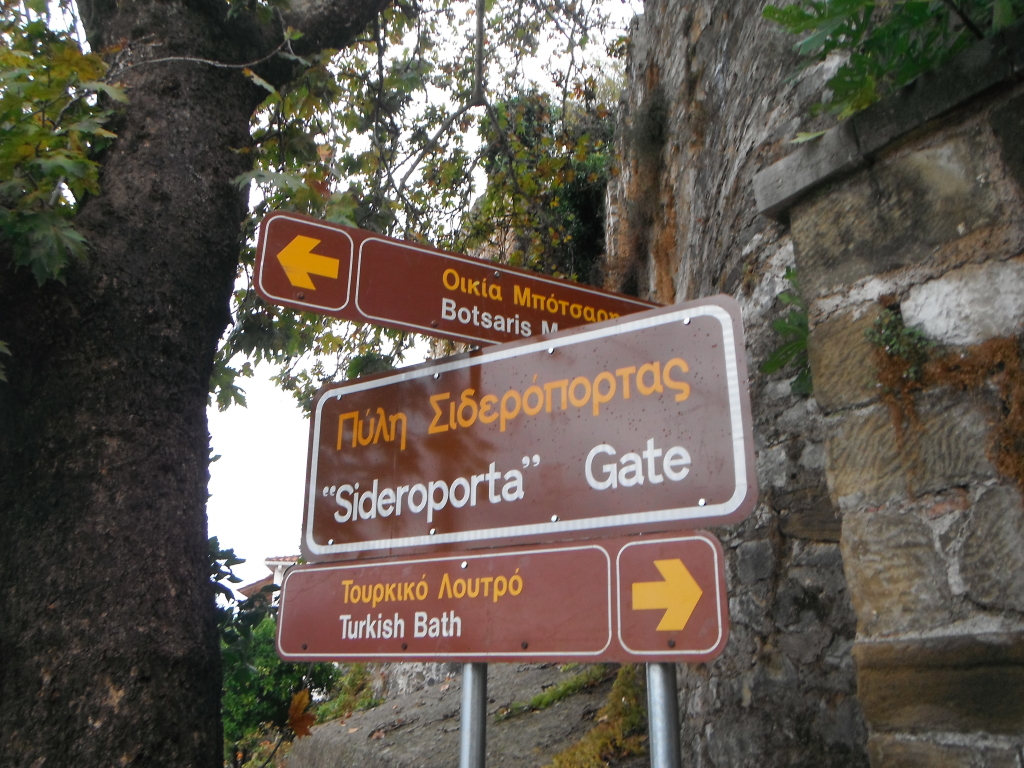 Exploramum and Explorason – Náfpaktos Greece, many ruins are free to visit

Here is the clock tower – just as the rain came! 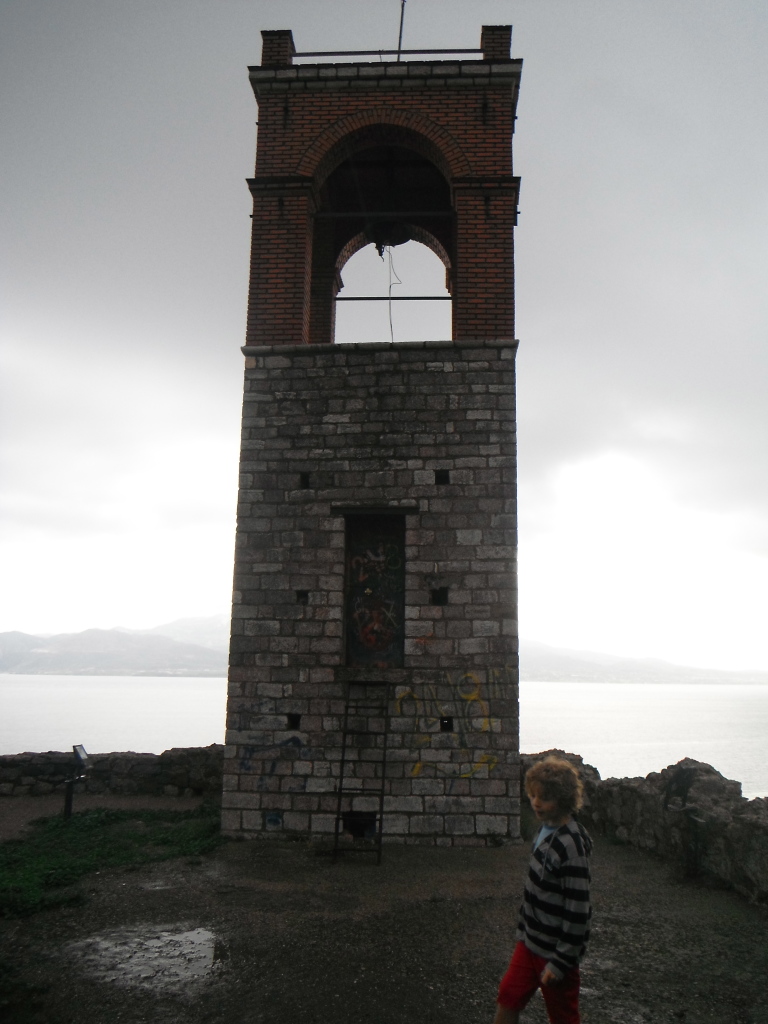 It was pretty much a relaxing 2 days and catching up on the internet. Mind you, the internet in Greece is usually of poor quality. 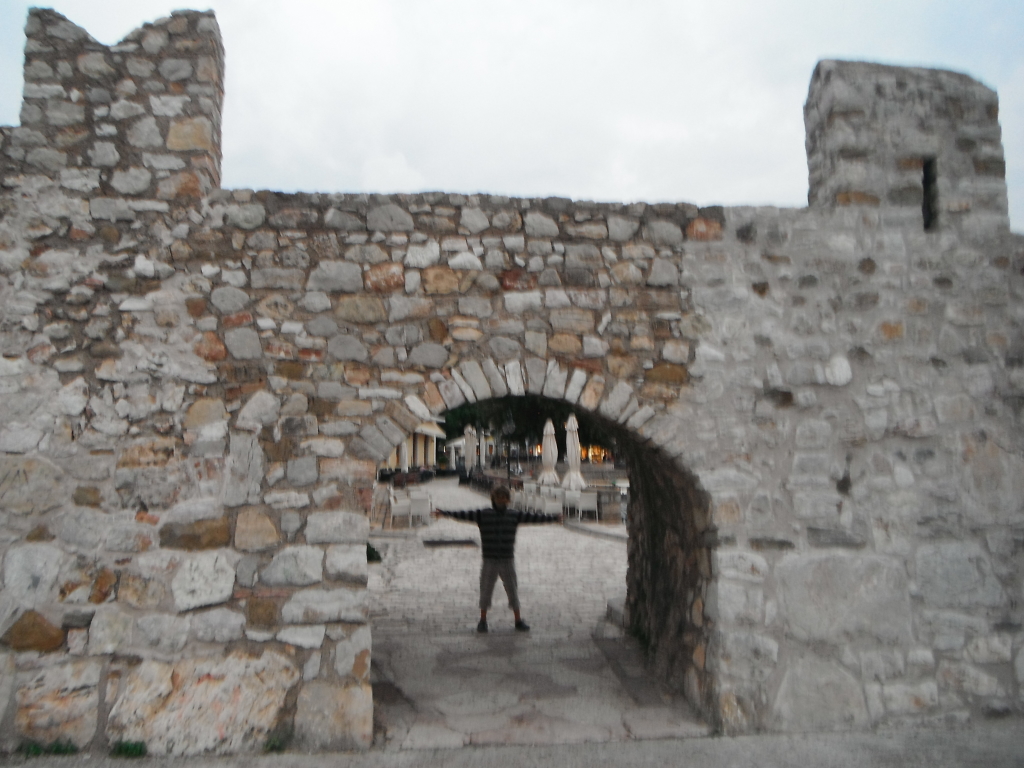 Next morning we discovered we slept in. Soon we were on the move – well really it was 11:00 a.m. 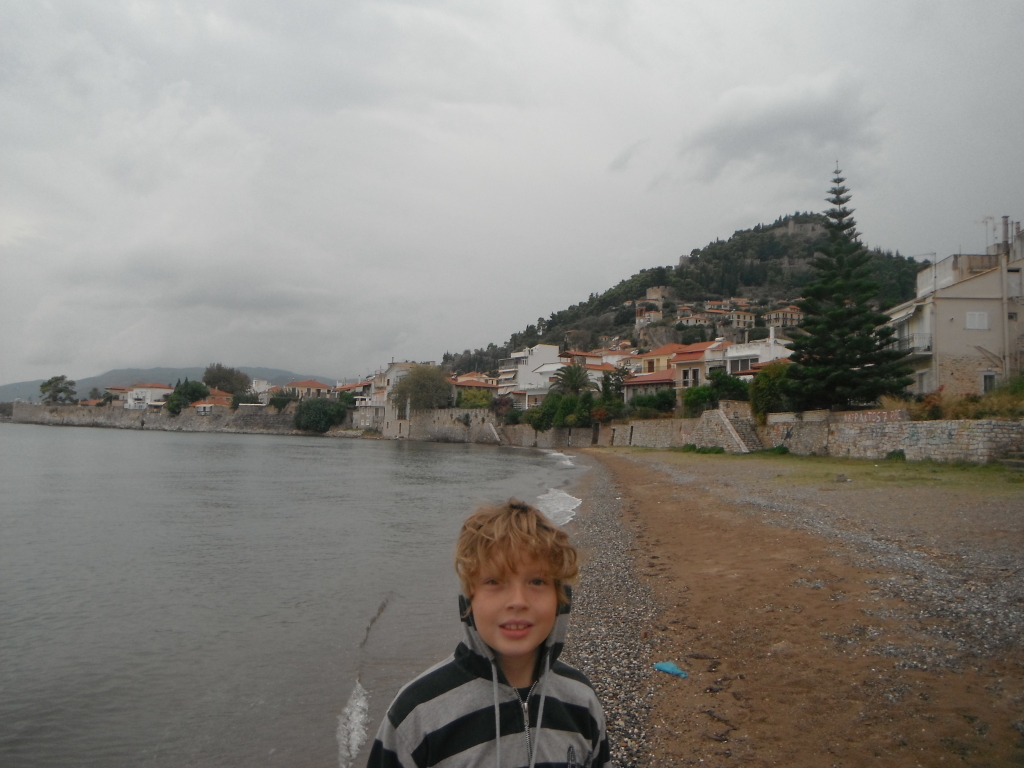 Exploramum and Explorason – Náfpaktos Greece, walking along the beach

Explorason only woke at 9:30 a.m. so finally with a blue sky appearing, we crossed the French-made bridge and headed to Patras.

The toll on this bridge is 13.20 Euro, and the ferry is half price, but you can’t turn to get to the ferry from Nafkaptos legally so we missed it. 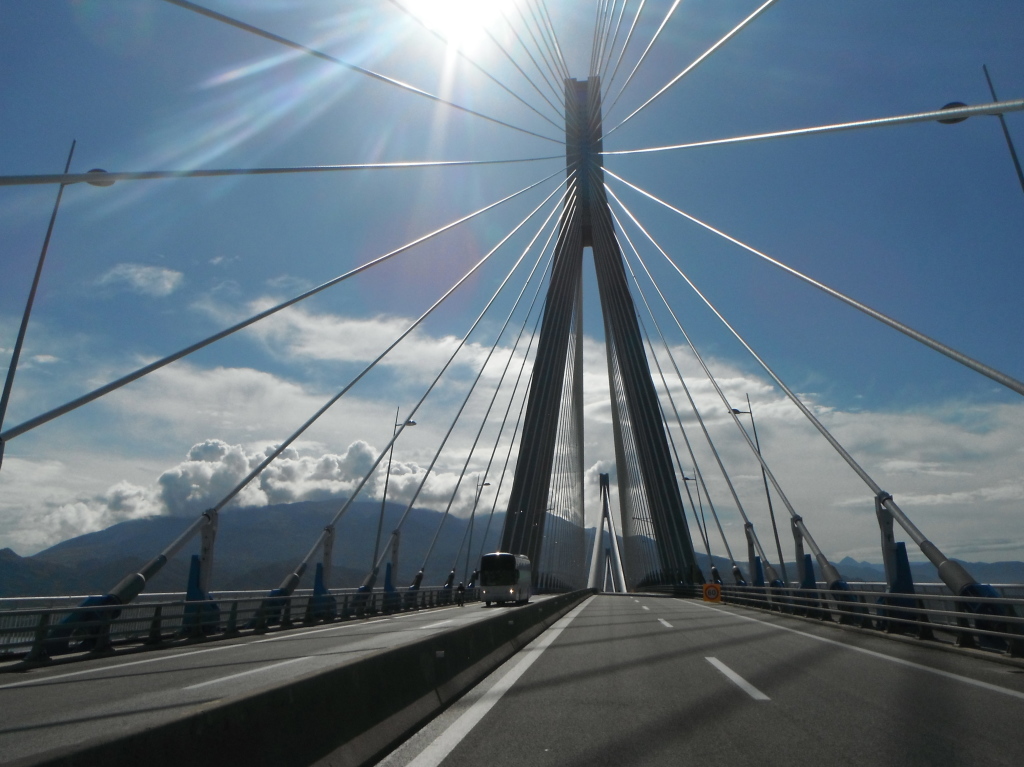 Patra proved to be a mad, mad traffic crazy town. Not really touristy, and so after failing to find a park we left. As we departed town we discovered a shopping center. Explorason of all people LOVES shopping centers. It was free parking underground but proved to mainly be one big store called ‘Jumbo’, which sprawled itself over 3 floors. ‘Jumbo’ consumed about 3 hours of our day. We needed a western fix. Just looking at Christmas decorations, toys, clothes and household items transfixed us both. We had a great time! We hopped in the car armed with a bag of goodies and decided to go back for something we had declined to buy. So ten minutes later, and another package – we were off.

We then headed to Pyrgos and decided not to stay as it was too early. So we drove on to the sight of the first Ancient Olympic Games – Olympia. We found a hotel – there are many – and for 30 Euro including breakfast, we had a great room with a fridge overlooking the church. And the owners were just lovely. I felt safe here.

Greece is really suffering financially, and their internet was down. I explained to Explorason that with 2 or 3 rooms filled a night, they may not be able to pay their bill for the internet, and he would have to live without it for a night. I was glad to be here to help their business even without the internet. 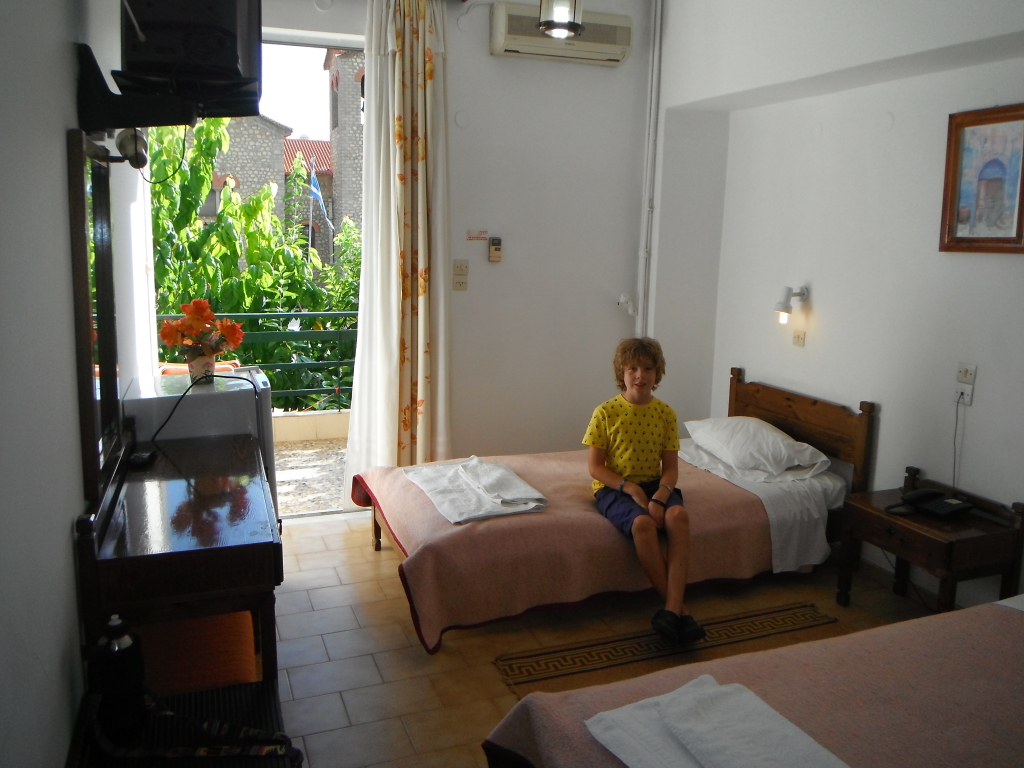 It was nice to be early that afternoon, and when we took a stroll down the pretty main street we met some lovely shop-keepers. I have been told the Peloponnese are friendly people and it is true. One man gave us 50% off in his store as he was about to close for winter. He also had a great conversation with us. He thanked me on behalf of Australia for our army coming to help fight with the Greeks in the war. Tears welled up in his eyes as he told us passionately how we helped save his country. Then of course tears welled up in mine. This then leads to a conversation about the war with Explorason. 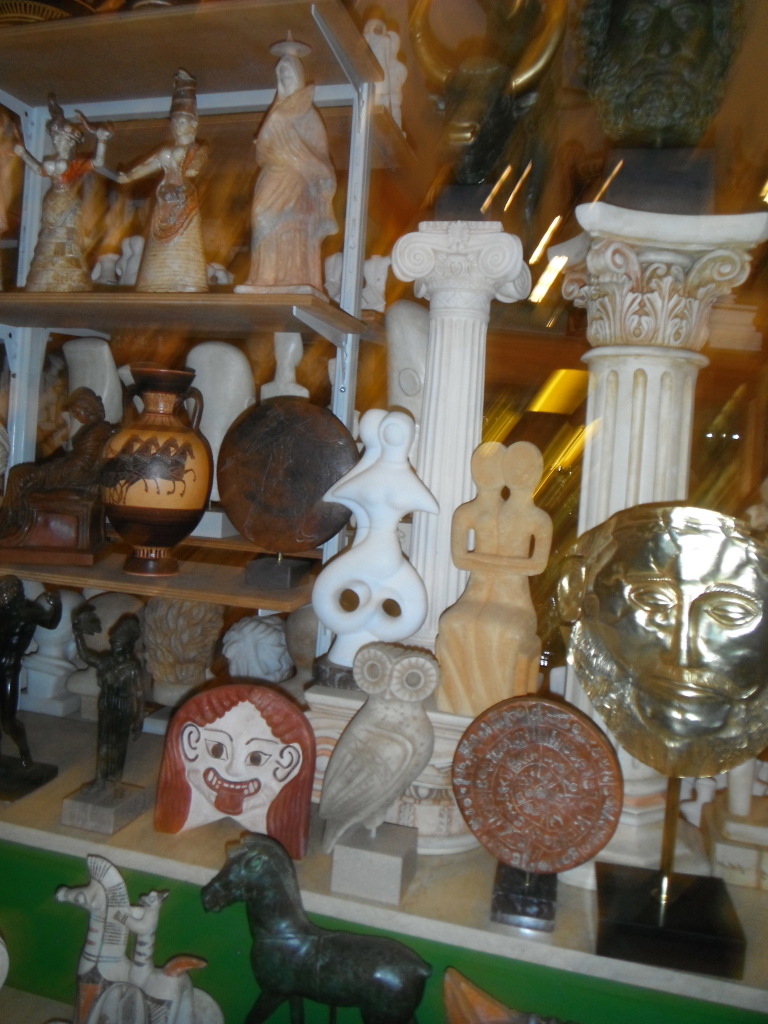 He then sold us a beautiful little candle holder with the name of a town we ‘must visit’ tomorrow’. (Read about that tomorrow) Another shop-keeper lady took time to write a list of towns along the coast she wanted us to visit.

The ‘big island’ as it is known, really is full of lovely Greek people. 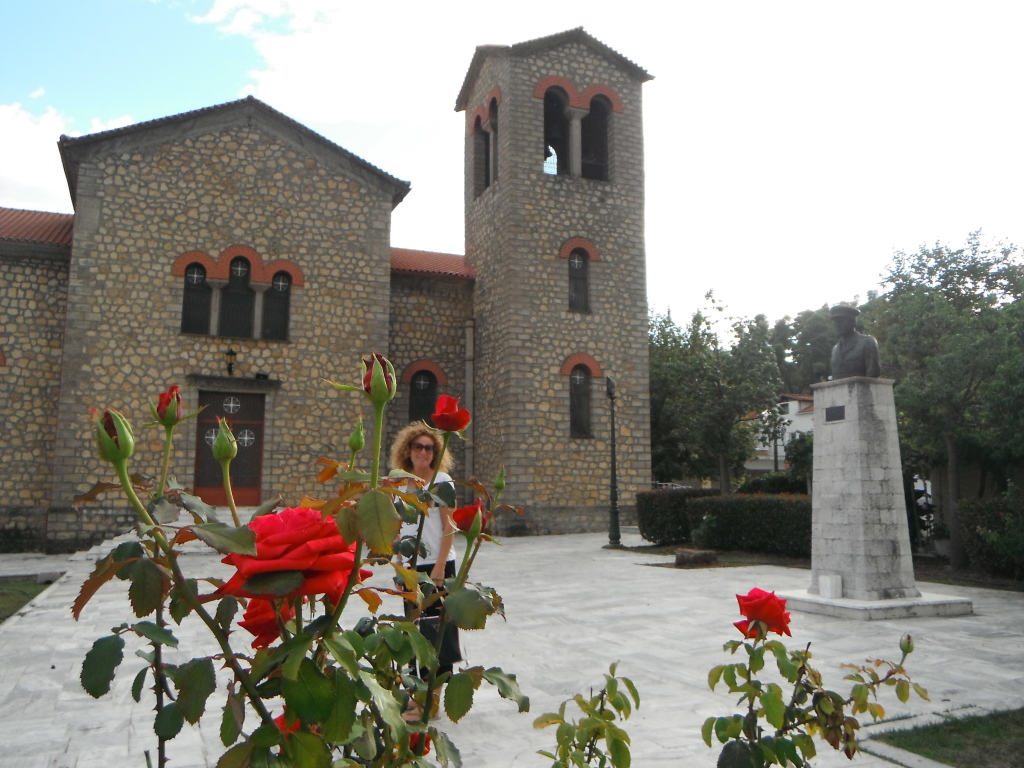 Exploramum and Explorason – Olympia, Greece – church in the square

We headed back to make some salad wraps in our room, as we enjoyed the balcony view of the old church. Life for us as long-term travelers may be on a budget, but here we sit, watching a movie on the computer we had saved, with a healthy dinner and a wonderful view over a pretty Greek town near one of the oldest places in history.

Read our next blog about our amazing fun time in Ancient Olympia.