Santiago de Cuba is definitely worth a visit

Passing by horse-drawn carts on a separate road, our bus journey this day seemed to take forever. We are pretty much going to the bottom of Cuba, nearer to Jamaica, and I am told it is different from the rest of Cuba. It seemed to be external sugar cane fields, with the occasional burning off, causing all to start coughing at the fumes as the bus stopped at the station to collect more passengers.  Toilets on buses are always locked unless someone manages to hack the door open, so there is always a mad exit for the terminal, armed with the equivalent of twenty-five cents to pay the ‘gatekeeper’. On the door.

As we enter Santiago, we see billboards promoting their political beliefs. There is never a billboard to market a product, seeing the Government controls it all.

We have booked a case particular through our last stay. When we get there we meet the friendliest people, but the room was small and horrible, and overloaded with garbage ornaments, and I didn’t want to stay. So they marched us through the streets, as we wanted a colonial home. He tried to move my luggage up the hills on his gas bottle trolley, but he broke that. He tried to use the neighbor’s old pram frame, but he broke that. I kept insisting we get a taxi, and in the end, he did. What annoys me is each time we move there is $5 – $10 added for the kickback programme.  This seems to be the cash in their hand they love.  He finally takes us to one with a huge room, with en-suite and I am happy.

We wander the streets and discover we are really central. We go to an old restaurant around the corner to eat, but half the menu is not available, so we move on.

After lunch – which is now 4 p.m. we stroll down a little wooden building area with all sorts of interesting stores.

Musician busks in the streets, and get cranky if you don’t pay for a photograph. 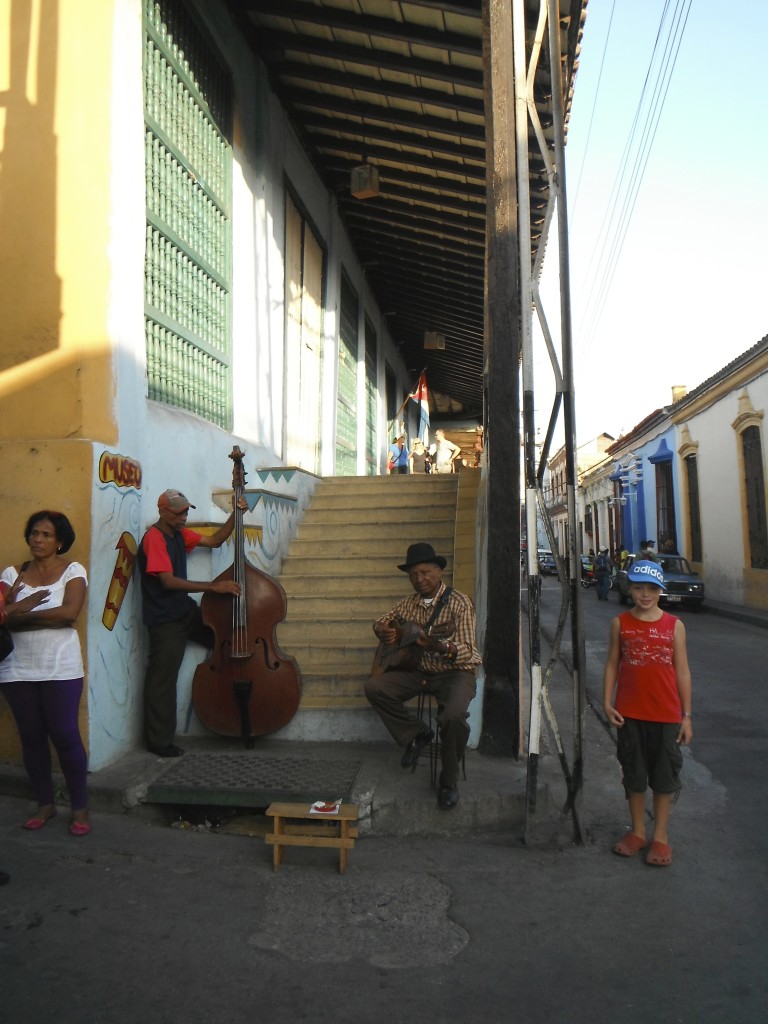 Time stands still. Old trucks are parked in our street, and horses and carts are still used. 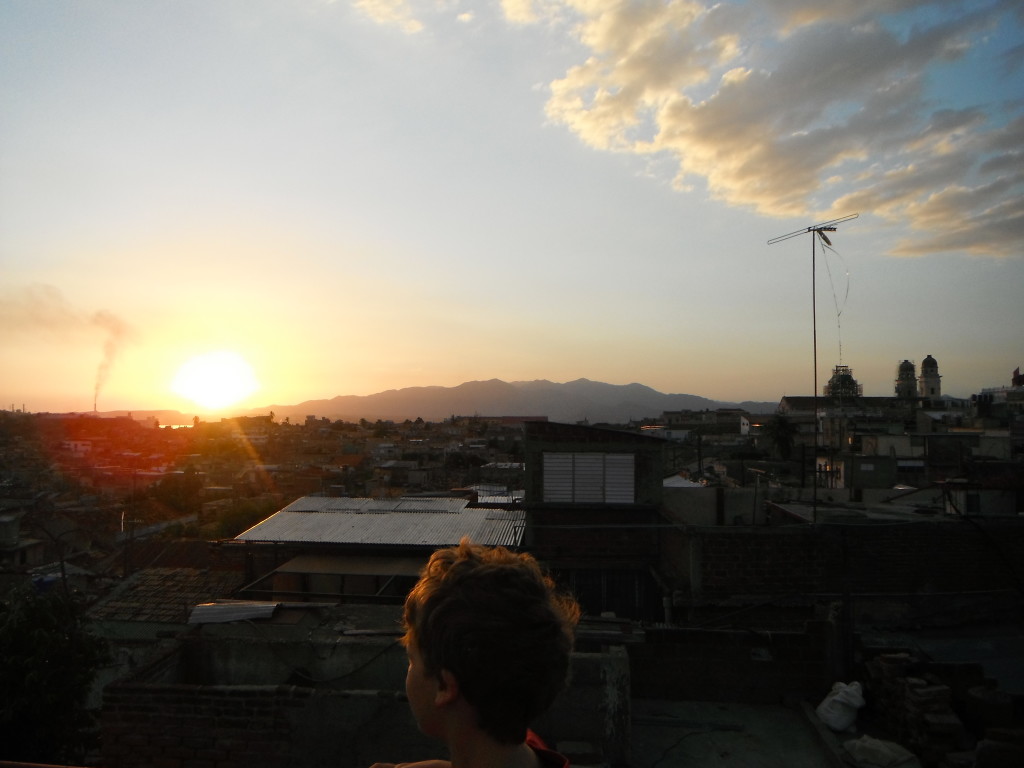 Next day we hire a taxi (after a lot of haggling) and frankly the guy was useless. He had no idea what to show us, so I grabbed my sister’s guidebook and started reading out places to visit. We went to the revolution center and also booked our bus tickets out (you need to do this in advance). 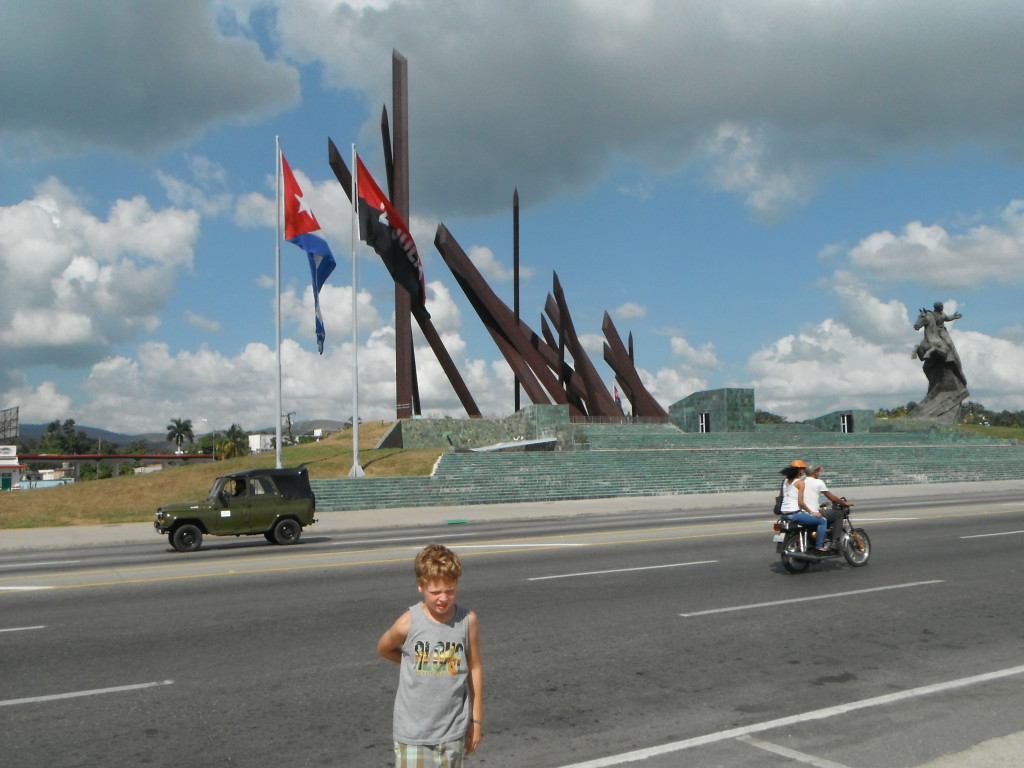 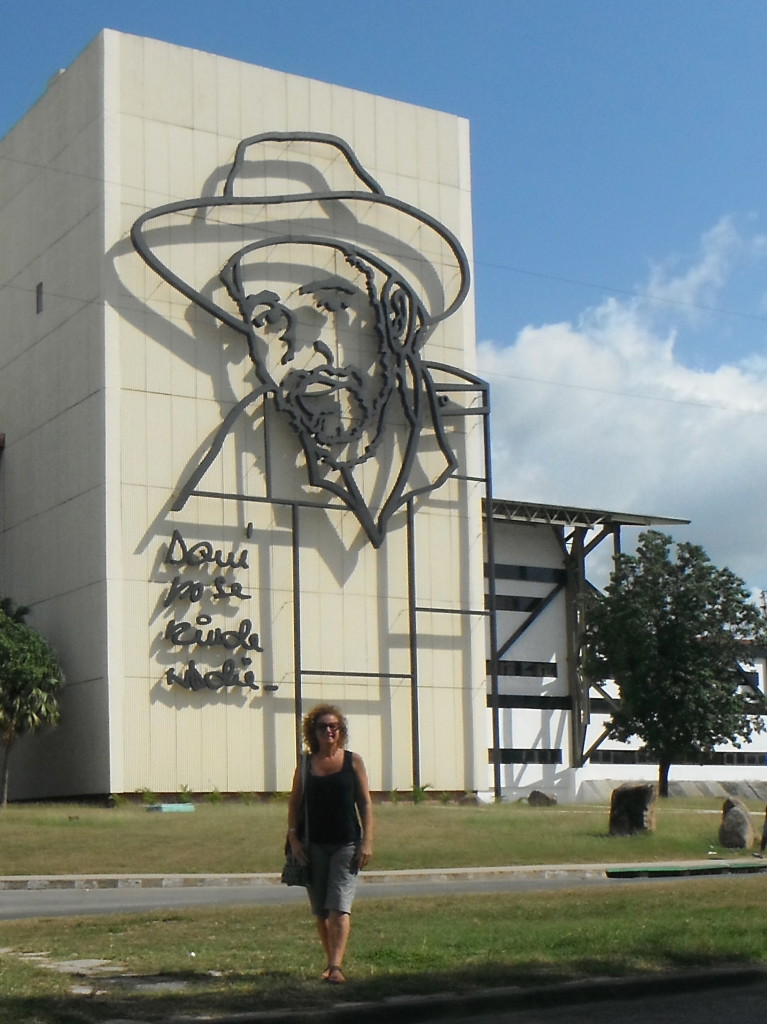 The love for their revolution heroes is everywhere. There is no way to escape the history and the learning of this country.

I had seen the school, which in past years was shot at. So I had the taxi stop and we went for a bit of a lesson here with my son. He was pretty shocked at the bullet holes. 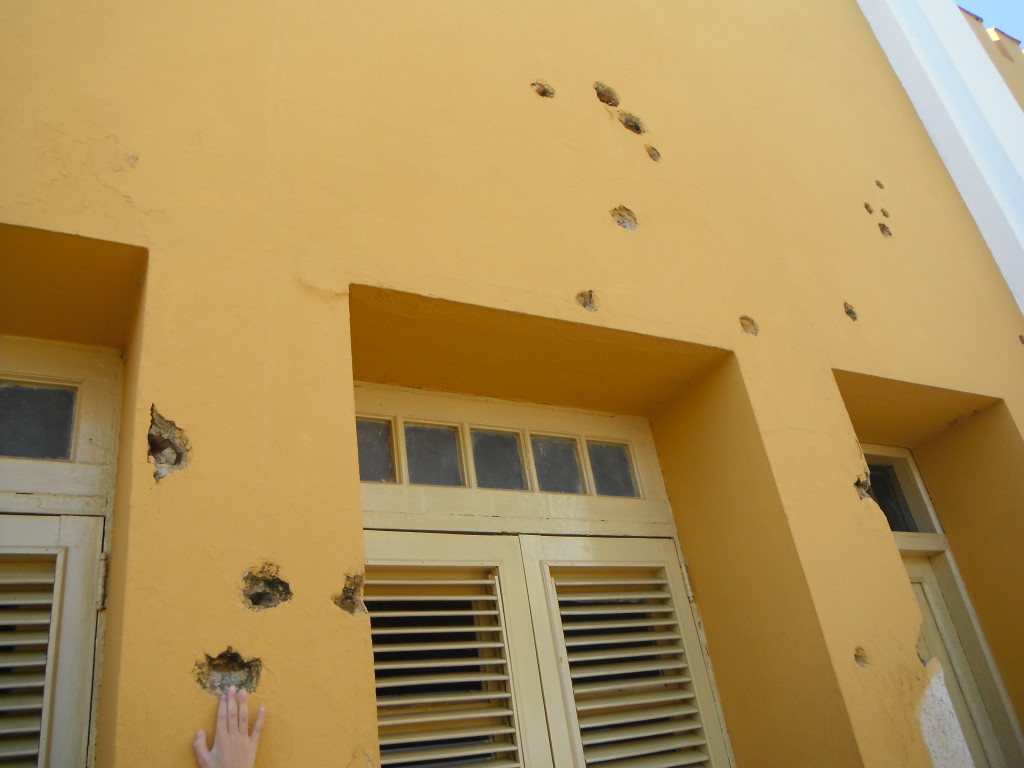 Next, I asked to go to the water, or so I thought it was a bay. It turns out to be a pretty useless dock area with an old police station and some restored buildings. They could really make this a feature of the town with a bit of work. We did enjoy the giant sofa there.

We wandered past the main church. Later we went to the museum here and inside the church. Beggars followed us and we gave to one, but by now I was unfortunately jaded by the quantity of overcharged and sleight of hand transactions, and the many locals who stopped us each day for money. Even here the man charged us to go into the church, but the church is free.

Next was the local town area. Further down this street, there is a tourist market with handicrafts. We went 2 times, and it closes pretty early.  It is OK, but Havana is so much better! 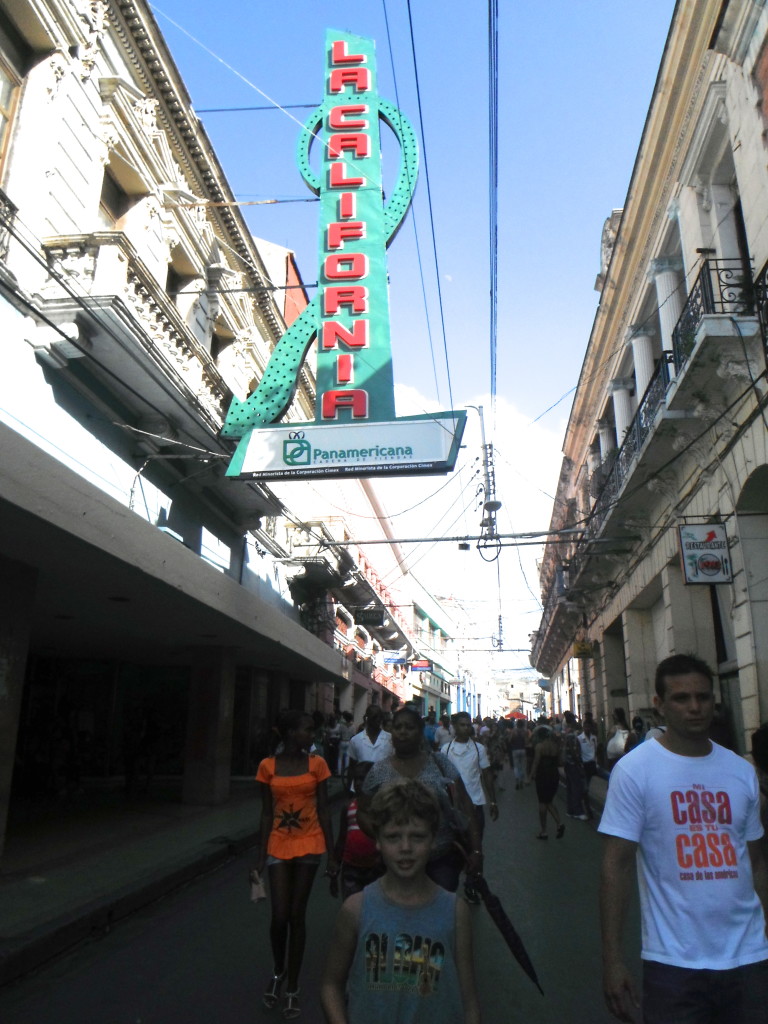 There is a supermarket next to the Buccaneer hotel. The hotel is worth a visit.  The supermarket probably is the most central too.

Opposite, there is one of the many schools. We tried to visit, but it is locked and they would not allow us in. There are no windows, so the kids hang out at the grates. One little boy gave a caramel candy to my son.  He was pretty touched with the generosity. Most days we ate local pizza for twenty cents in a side street. It would be in a piece of white A4 paper and folded and drip all over the place, but it seemed to be a good morning snack.

We had a LOT of trouble trying to work with agents to get a ticket to fly to Jamaica. We went to the office one day and spent $15 on taxi’s, only to find there is no office, and the airport is only functional on the day of flights.  It is a frustrating and useless system.  Even Havana-tour can’t help with some questions – more on that later! So we rode home on the local bus.  This is the equivalent of five cents.  Some will tell you that it is not legal, and the man told us off for taking a photograph, but it is a pretty horrid, but cheap way to travel, and is more like cattle in a truck, than a bus.

After the bus, they dropped us at the plaza, and my son thought the hat on the statue was very Smurf-like. Here we were invited into a jazz club.  We had a fabulous virgin Mojito, but it was $3 which is a crazy price for a Cuban local bar.

We then wandered down to the Rum Museum. I learned so much here. So did my son. 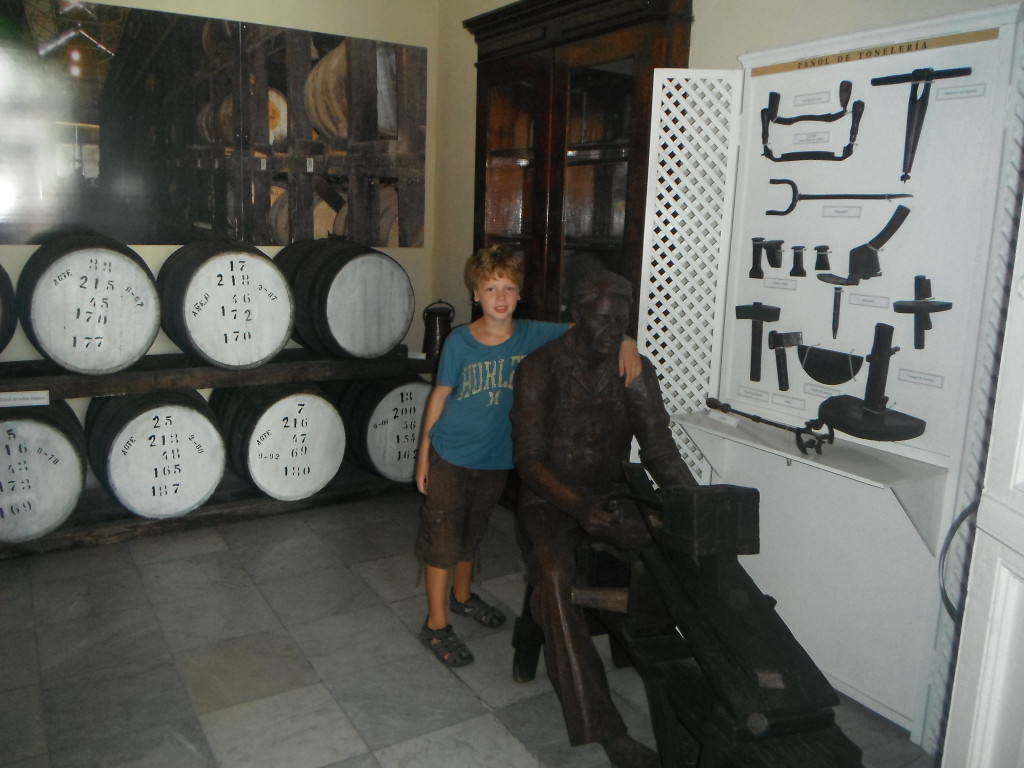 We were able to make our own stencil with this machine, which took a lot of muscle!

I was able to try vintage rum, included in the price-powerful stuff! 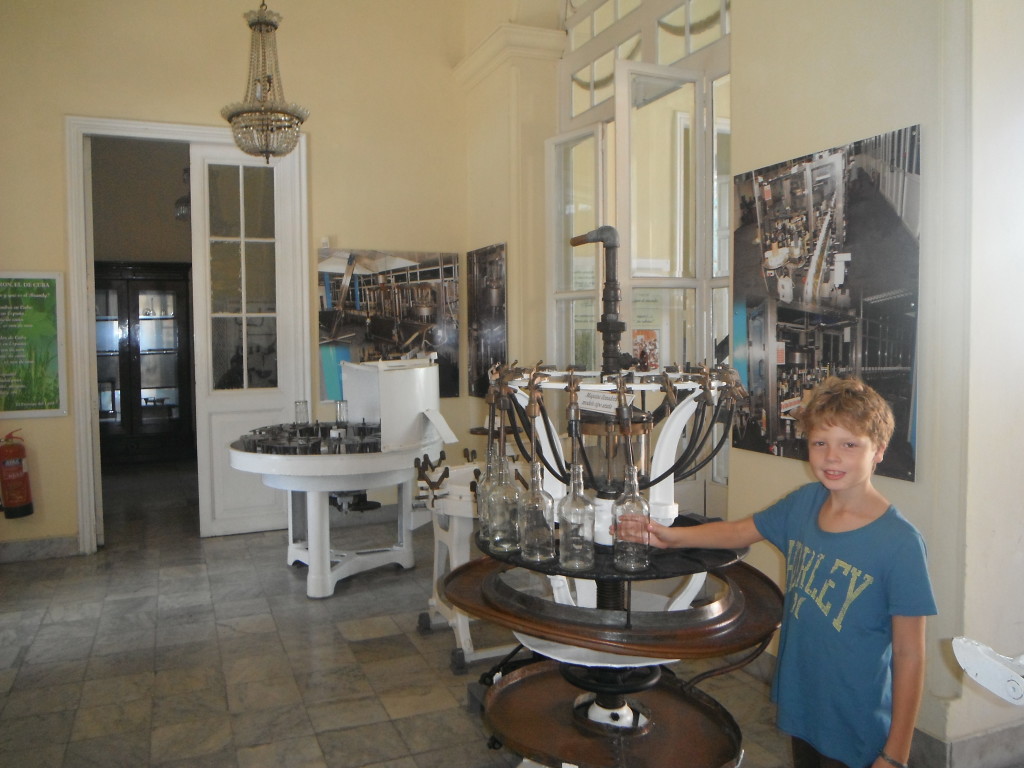 On return to the case particular, there was a rose waiting for me from the owner’s son.  He was probably 30 and was always blowing me kisses, and so I was a bit surprised at this. I did get asked out 5 times in this town though.  It has an air of romance to it for sure.  I think it is the Caribbean air?

One night we passed the old locals in a hall dancing. They invited us in.  My son and I had dancing lessons and ended up with me teaching him to waltz.  We both loved it. Both these guys danced with me. I must have looked a sight. 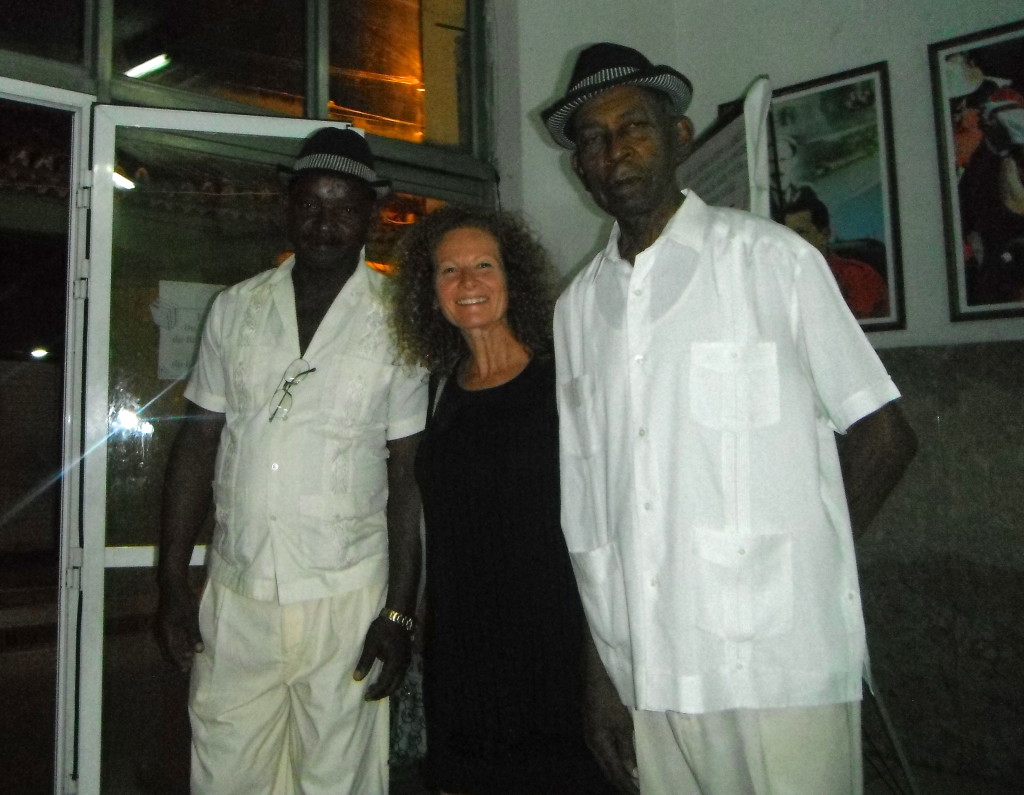 Music is everywhere.  We went to three different jazz clubs.  It is $1 for foreigners to get in.  By now my son was too tired, so we didn’t stay long.

Another day we wandered the streets. A few buildings are now restored.

Their famous steps were quite a let down though. But there is a great museum near here, and the guide was great, and we learned so much about the revolution there. 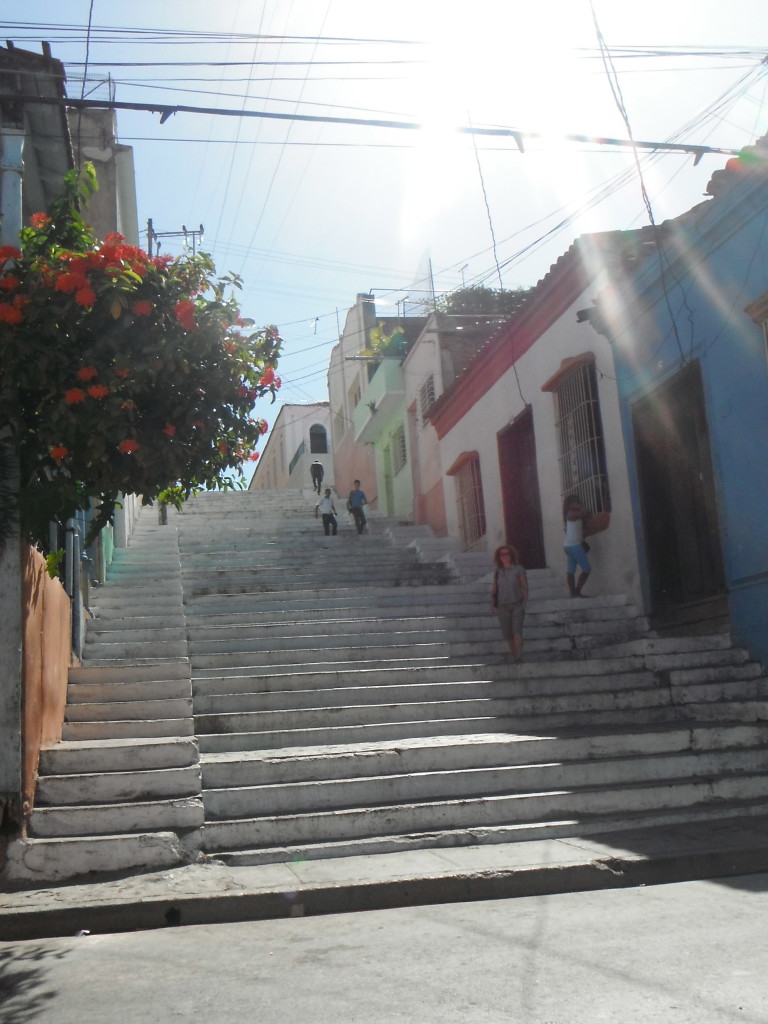 Music is everywhere. We loved the Plaza with the local band that seems to jam all day.  This is opposite the cathedral.

We went to the local Trova.  This has 3 areas for music.

Here people, sit, smoke, drink, and dance. I was asked out another 2 times here! 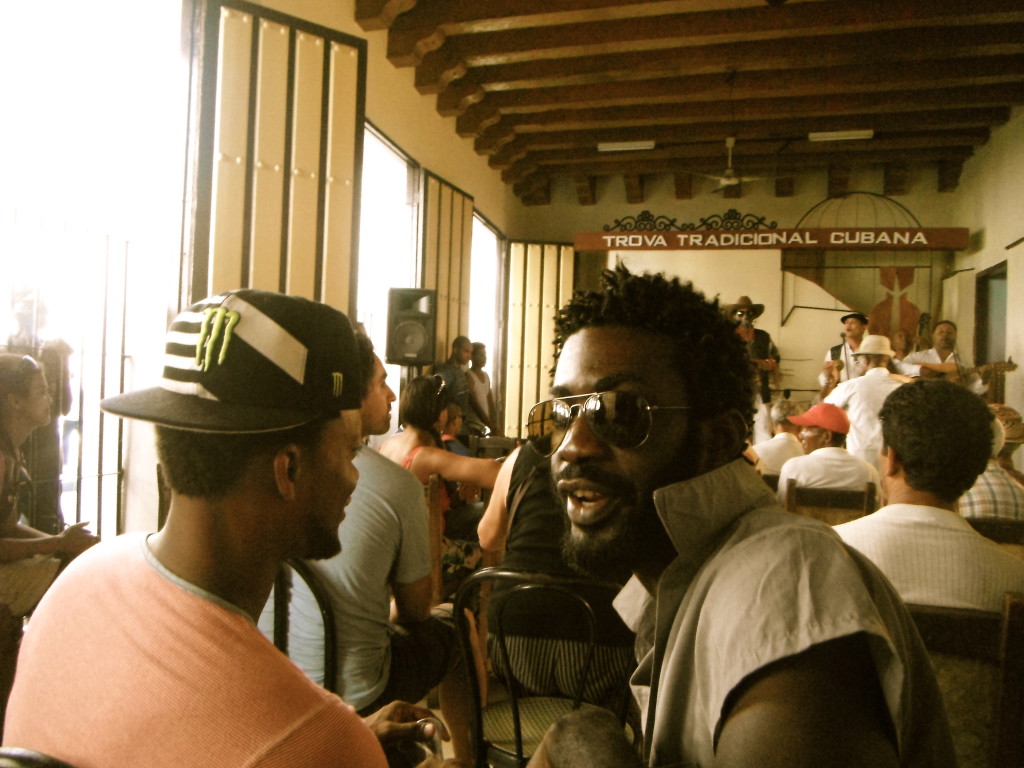 Our last encounter with music was at a book and junk store. Here on the steps, a band will play your Latino favorites. I danced with my son again, and they played his favorite tune. It was a great end to Santiago de Cuba!

Check out these amazing special deals