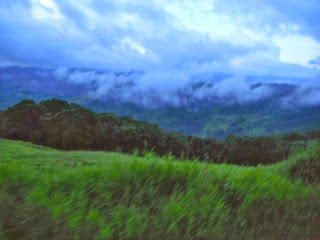 We left Alajuela fairly late – we had been told the night before that there were buses every hour.  Then suddenly, a guy at the hostel told us something completely different the next morning. He was adamant there were no direct buses to Monteverde until mid-afternoon. If this is true, we feared that there would be a delay on our single parent travel plans. As luxury travel experts, we try to be at the right place at the right time. Due to the conflicting information we were receiving, this stage of our family travel seemed a bit confusing though.

So back to finding our first guy. Fortunately, he was still there, and about to leave.  So we asked him to write us the first town in which we would get our first bus ride.

We had a taxi take us for an extremely long ride. It should have been 6 blocks, but somehow he managed to go about 25 blocks and I knew we were getting stung. He was a taxi driver, called by the guy who gave us the wrong info. So lesson here, is go out and hail one in the street, and negotiate a price without the meter.

We got to the bus station, and they would let us pay in US$, but at a lousy rate. Costa Rica was costing us a lot — maybe that is the “Costa” bit, says Explorason.
We took what was meant to be a 1-hour bus trip but ended up lasting for 3 hours.
To add to that, there was no bathroom, so when it stopped I had my son dashing madly to the bathroom.

Somehow we ended up on the Pacific Coast – at Puntarenas. This seemed strange as we were going to the center of Costa Rica.

We got a fairly good deal on lunch at the bus terminal. We then headed across the road to wait for the next bus. There were only 2-afternoon buses — and 45 minutes apart — more weirdness. However, we got to see the coast, and it was hot and stuffy. 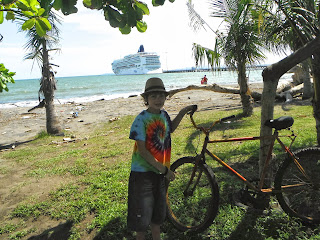 We were then told the bus is 1 hour to Monteverde. But it was raining and the road being used was terrible. 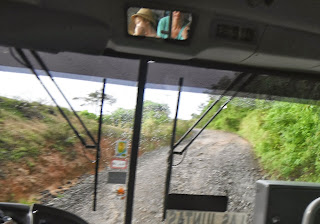 We head through the cloud forest. The trip takes 4.5 hours. We arrive at Monteverde Hostel Lodge. This is no hostel.  This is a gorgeous lodge. To get to our room, we have to cross a suspension bridge. 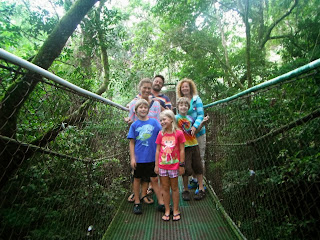 Our room is all wood. It is spacious, and clean, with an en-suite. 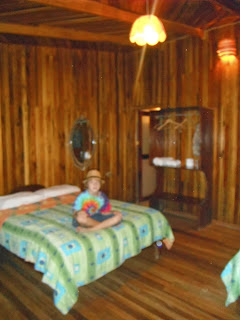 We had heard about the famous Tree House Restaurant – one of the top 10 most unusual restaurants in the world, so we headed there for a snack and a drink.

So glad we shared a meal, as again we were over budget. My budget was NOT liking Costa Rica, or as we now called it “Costa Lota”.

But it stopped raining and we enjoyed sitting under the big tree upstairs — a novel and fun night, and we had great service too. 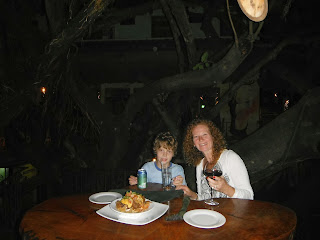 The balcony outside our room was a lovely spot for a quiet time in the morning. I sat and just breathed in the fresh mountain air. 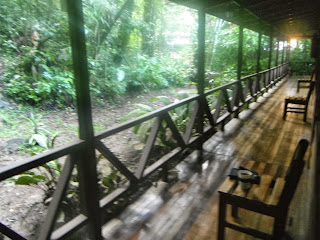 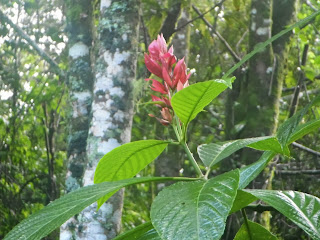 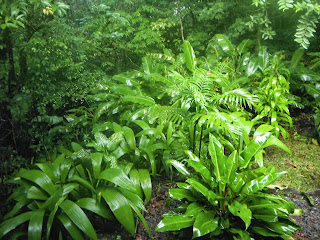 The birds were singing and we were delighted to see hummingbirds and other magnificent birds.
Apparently, there were monkeys, but we didn’t get to see any and were told we should have left out bananas to entice them. 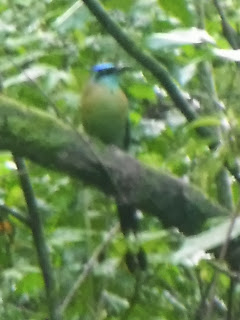 Unfortunately, it rained all night and that morning. We were drowned rats just getting to breakfast. But we didn’t mind having the day in. We were waiting for another traveling family to arrive, so we caught up on some blogs, emails and had a lazy morning. 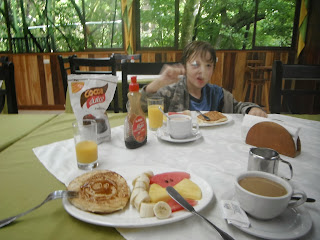 We met up with our new friends and sat and chatted all afternoon. We then decided to go back to the Tree House restaurant, but it was raining, so that was a shame. But we added another Australian guy to the group, who had traveled to most of the areas we were all going – so we got some tips from him. 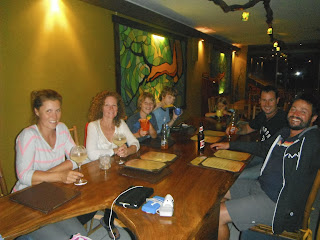 Next day we all met for breakfast and decided to go to the Suspension Bridges. There are 8 bridges, and we were fortunate they had a car, as it is a long way out of Monteverde town area. 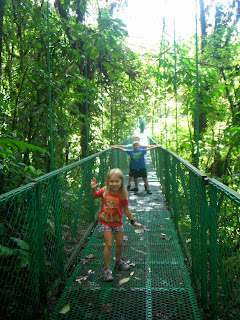 It cost us $60 for entry for my son and I and that included the small Hummingbird Garden. 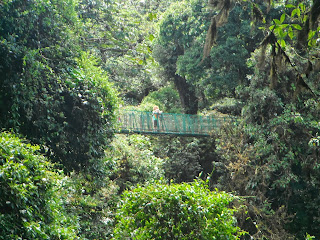 It is a pretty long walk, and it is a shame as you can’t really see the water underneath. There are no paths the kids could go off exploring. We didn’t see any wildlife either. In other parts of the world, you wouldn’t even be charged, but everything is money here. 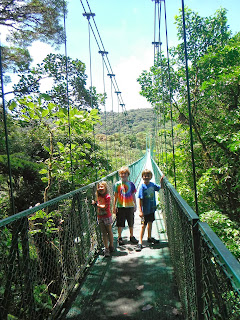 We enjoyed the walk — would be awesome if the clouds had moved over whilst on the bridges. 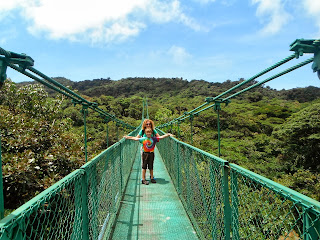 Next was the Hummingbird garden. It is small with 2 tiers and a lot of hummingbird feeders. 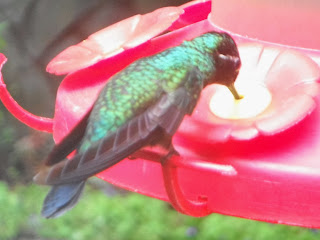 The hummingbirds are noisy and fast and fly right close to you — freaky. My son went on his own and was patient — he wanted to touch one. I was amazed at his patience, and how he did indeed get to touch one — just! 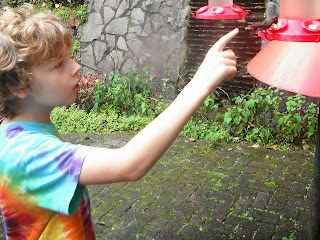 The garden is better valued than the bridges – $5 entry fee. 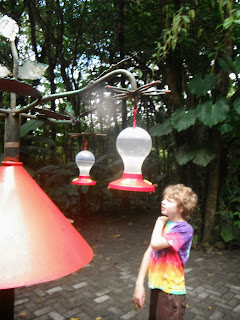 The colors, sizes, and varieties are incredible. A great place to take kids. 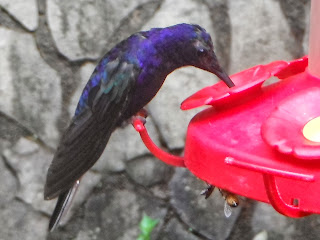 When we headed back to the lodge, my son said the suspension bridges were ‘boring’. I was disappointed as we had spent a whole days budget, just going there, but I was glad he was honest, as I would do other things next time. Next morning (we are early risers) we were in the forest for a walk. 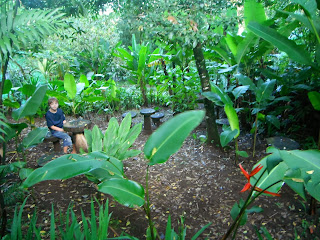 It was a good lesson — banana palms and flowers forming, so you could see exactly how they grow. There were also many types of coffee plants, and I found that interesting as they were all sign labeled. 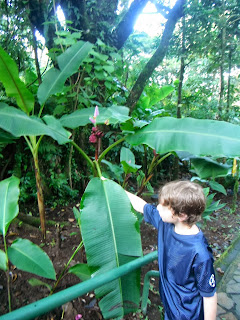 Our friends offered to take us to Liberia to get a bus. Their car was so packed, it was hilarious, but we managed to all get in. 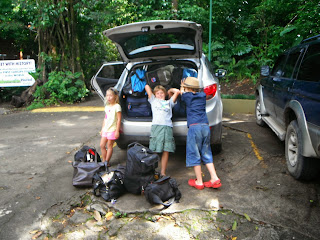 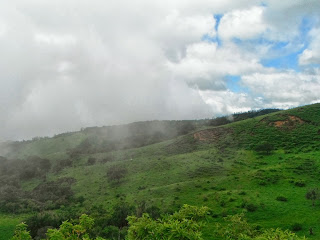 We have decided to leave Costa Rica. Our budget for world travels would be too dented if we stayed here. We met ex-pats who told us the Americans are leaving as it has become too expensive. Shame, as it has so much to see. So we will head on ….…
Goodbye Costa Rica.
Questions and Comments

One thought on “Monteverde Cloud & Rain Forest of Costa Rica”