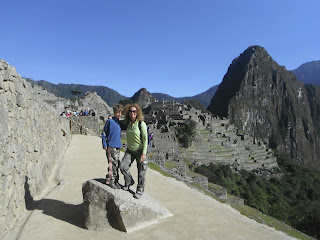 Yesterday we were up early to get the “collective”, or mini-bus to Ollyantaytambo.
When we arrived, we instantly noticed the “tourist prices” at the restaurant, but we were so hungry, and with little time to spare, we ordered and pretty much scoffed our lunch down.  We raced to the train station and had our first request of many for our passport. 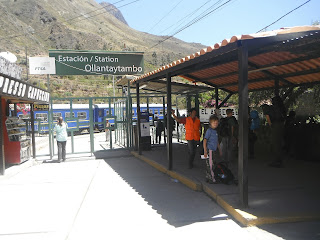 At the station, we waited over 1 hour, while they fiddled and changed carriages with no concern about time.
When we finally lined up to board the train (and another passport request), we were told we were not seated together, even though the lady at the ticket office assured us we would be.  Now as a mother of an 8-year old, I am not going to have my son sit elsewhere.  So the staff kindly changed us to a nicer carriage (but not without yet another passport request).  Once we were seated, he then changed us again to a nice booth all by ourselves, along with a view of the river.  We were then served drinks and free nibbles, and started to enjoy our ride immensely, apart from the sweltering heat from the glass panel roof! 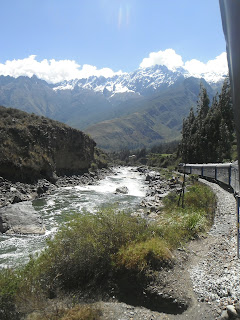 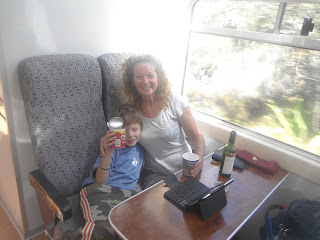 We arrived in Aguas Calientes very suddenly – and with no announcement.  The station was packed with locals from hotels and hostels, waiting to meet guests, or advertising their premises for travelers.  We decided to follow a lady through the market, up the hill of the mall / main street.  We didn’t like her hostel, but there were so many others to choose from.  We found a great deal for $20 AU including breakfast. 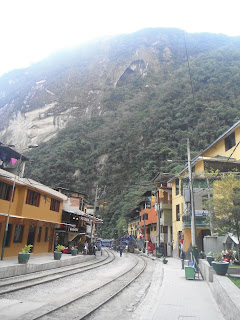 Next, we decided to buy our bus tickets for the next day.  It is a zig-zag road, and the only other choice is walking, so we purchased our return tickets.  Next was to the center square to buy the entrance tickets to Machu Pict.  I was told children were free, but seems, only before they turn eight – drats!
We decided it was time to eat, and considering every restaurant has some-one enticing you in, we were a little bombarded by pesky enticers.  However, we selected one.  Turned out the 4 X 1 drink special ceased after my first drink.  The dinner plate was a bread and butter plate, and it was really not so cheap, as we left hungry, and a little poorer.
Later, we ventured out of a food and drink “top-up”, and discovered a great little restaurant with traditional music.  My son wanted to dance with me, so up we got. Next thing we were being clapped to the beat and others followed.  I really enjoyed “the moment”.  It was a shame we had an early start, or we would have stayed longer. 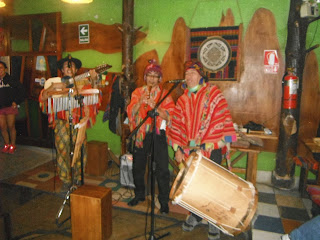 Next morning I was up at 5 a.m.  I didn’t think to do the sunrise over Machu Picchu, which I would recommend if I had time over.  We were at breakfast before 6 a.m. and on the bus before 7 a.m. which was still pretty good. Not without another passport check of course!
The bus zig-zagged up the mountain-side.  We had been given a list of what NOT to do at Machu-Picchu, including not bring food, disposable drink bottles, and many other things.  I decided to sneak in some snacks but didn’t pack a lot in case it was taken.
We lined up for yet another passport inspection.  Our bags were not inspected, and finally, we were in.
Instantly the view is breathtaking!  We decided to go to the right (later we discovered you really need to work from the left as you go in – as there are many one way tracks.  But the good thing was it was not so packed with people. 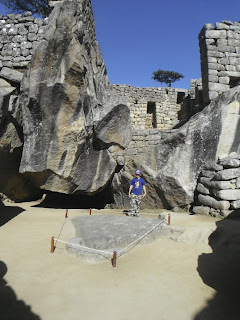 We had decided not to get a guide, as my son would get bored, and wanted to run around and explore, so we just hung around at a few points where an English guide would be explaining things, and really we learned enough. 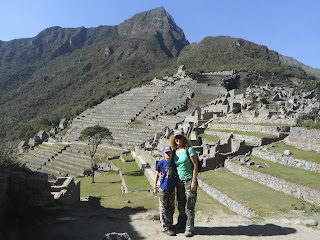 We were really glad we had no guide when my son discovered llamas and alpacas wandering around the ruins. 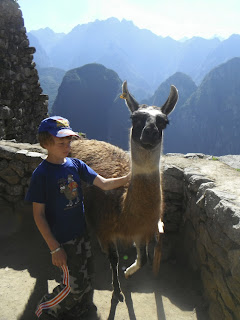 The next while he spent pursuing them.  My aim was to photograph us with them, but this too time and they would often take off.  Let me tell you that a llama can give you a good hip shove out of the way too!  Then out came our snacks.  First was the bananas.  The big ones really enjoyed my carrot, and had teeth more like camels!  Lastly was the Clementine mandarin.  This was great as we could segment it, and it lasted a while. 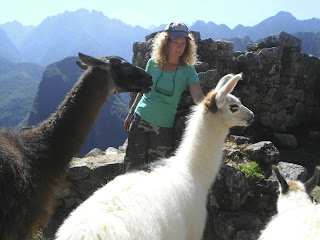 Once out of food, and having spent a good hour llama chasing, we moved on.  Alas, we discovered we had to back-track, as many of the paths were one way.

By now we were out of the water, our food was gone, and we were tired and in need of a rest.  The fact that every time we tried to sit, security would yell “señora” at me and tell us to move. 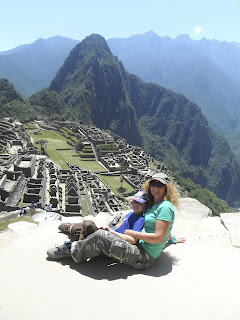 So we headed out of the park – but the guy wanted to see our tickets and passports again, as we would want to re-enter.  The good thing was we were given a Machu Picchu in our passport. By now I was a little over the passport checks.  But I was quite over the cost too.  8 Soles for small water, 20 Soles for a piece of pizza they wanted to microwave, and on the list went.  I decided this was the most expensive day of our trip so far in over 1 year.  This was even more expensive than Disneyland!
We finished lunch, did the passport check again, and went in for our second round.  This time we went left.  It is a pretty steep climb, but we had a smiling Stephanie Powers look-alike with us and a bunch of retirees that looked like they had been given walking poles and pushed out of their cribs.  I thought ‘if they can climb it, so can I’.  On and up we plodded.  We completed most of the park and my son was stuffed.

We then met an artist Tommy Kane and as my son loves to draw he shared with him how he wants to be good enough to sell his drawings when he gets to Paris. 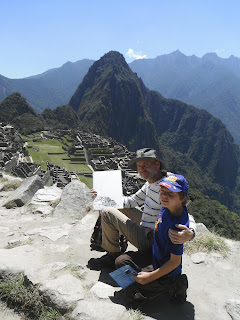 We had a great day.  This was a dream come true, and I was elated.
We waited about 45 minutes to board a bus, and so we just had time to head back for our bags and get to the train.  The train, of course, was not on time, and we had to wait another hour or so.
This time they had us in separate carriages!  About 6 pleas later we managed to get in a carriage together but the seat was backward.  We managed to change and had a great ride back, but by now it was dark.
We had no-where to stay in Ollantaytambo but found a great hostel down a cobblestone lane.  We then headed out for pizza, but we didn’t last long and were soon heading to bed.
We had a magnificent day.  It all ended perfectly with a great place to stay!

2 thoughts on “Machu Picchu Peru A trip to remember”