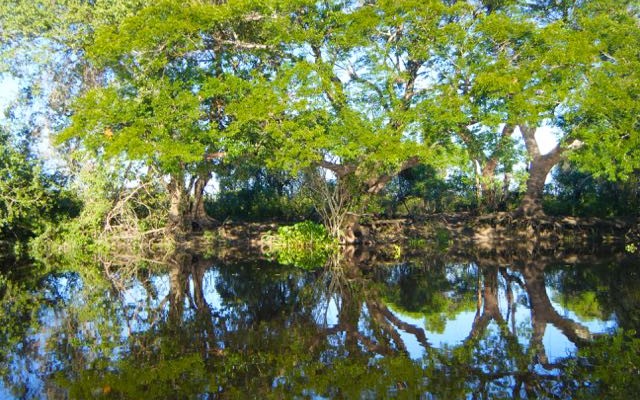 Yesterday, I did not even know The Pantanal Wetlands of Brazil existed. I was hunting online for hostels and found out that we would be stopping at the edge of the world’s largest tropical wetlands – located very close to the border of Brazil and Bolivia.

So I had sent an inquiry via email to Ecological Expeditions. Afterward, I read some concerning reviews and therefore sent them a cancellation email.

However,  this was fortunately ignored as the guy had turned up at the border. We then haggled over price and eventually agreed on a price that was a bit more than our day’s budget. Our budget is on average $60 – $70 a day, depending on location for South America.
He then offered us a free night at one of their hostels after the tour, so this was the sweetener. The guy gave us a receipt and seemed detailed, but as we have not had much success with tours I was skeptical. We find that if they hear you speaking English, think you are rich. I stressed to this guide that I did not have a lot of money to spend.

After our late departure from the border, he took us to the supermarket. Inside were about 6 Automatic Bank Teller Machines. My Commonwealth Travel Money Card would not work on any of them. My credit card worked on only one, but at least we had some cash.

We then went to Ecological Expeditions office near the bus terminal and sent a quick message with the details on Facebook just so our friends knew we hadn’t disappeared for the next few days. Then we went across the road for a quick bite. Today there had been a LOT of waiting at the borders that when we waited here, we grew quite impatient.

Was He An Angel?

Ordering lunch proved difficult as this was our first exposure to attempting to speak Portuguese. We had no idea what to order, as it was a basic cafe and there was no menu. But a man whom I thought at first was a kind of weirdo, came in for no reason from passing by outside and told us in broken English that he was a Greek and could speak many languages.

He offered to help and seemed more like an angel than a weirdo by the time he finished. I told him I wanted bread for my son. Next, he shot off next door and bought us a bread roll. He did not work here, he was just kind.

Then two guys we had waiting in line with at the border arrived, so we talked to them. One had the dreamiest eyes I have ever seen and he looked and spoke like Jesus.

My son was convinced he had met ‘Christ’ himself and been helped by an angel – all within the space of five minutes! Explorason especially decided this to be the case when ‘Jesus’ concluded the conversation by saying that he

“thought traveling the road of life with my son was the most precious and wonderful gift I could give my son, and how it showed my love and the rich bond we shared”.

Well, my son was convinced it was Jesus speaking then! 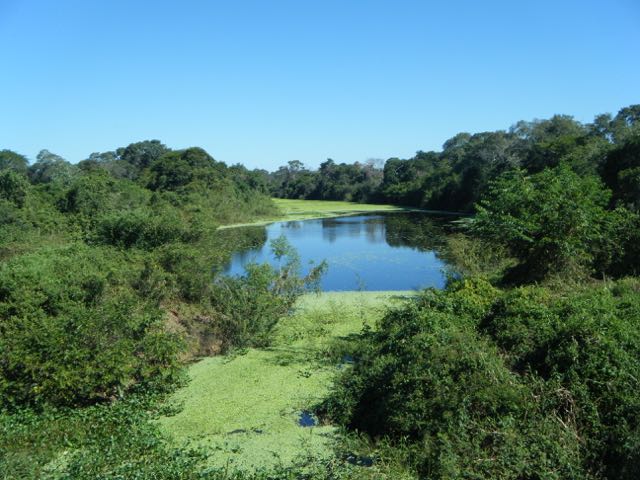 We quickly raced back to the tour guide hoping he was not a con artist who had our luggage and was going to vanish, but thankfully he as still there As you can imagine we were keen to head off.
Slowly we seemed to leave this town, but only after he collected a couple of things en-route.
Next, we were driving to the country and it looked a lot like Australia. But the road was so bumpy that everything inside us was shaken up.

Where Is There A Toilet Please? 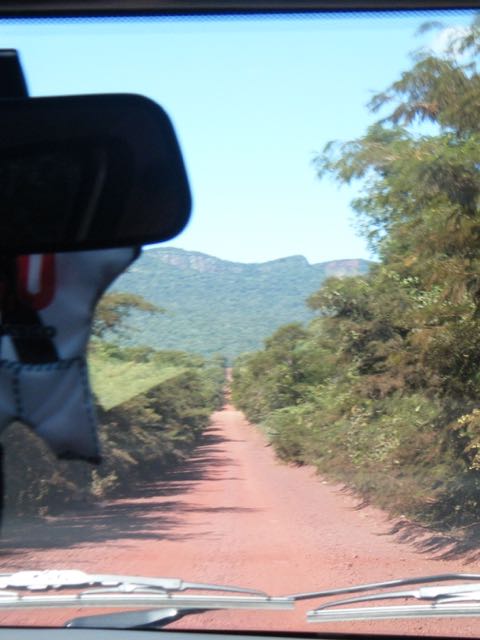 ©Exploramum and Explorason – The dirt is red and rich

I regretted sharing a drink with my son as my bladder was now vibrating internally. The drink had been a fizzy orange pop but was served in a bottle the same as large beer bottles here.

After asking the driver to find a place for ‘natures call’ we continued on our bumpy journey.

I was amazed by the rich red soil just like Central Australia. Emus were also in the wild which meant it really was feeling more and more like Australia. 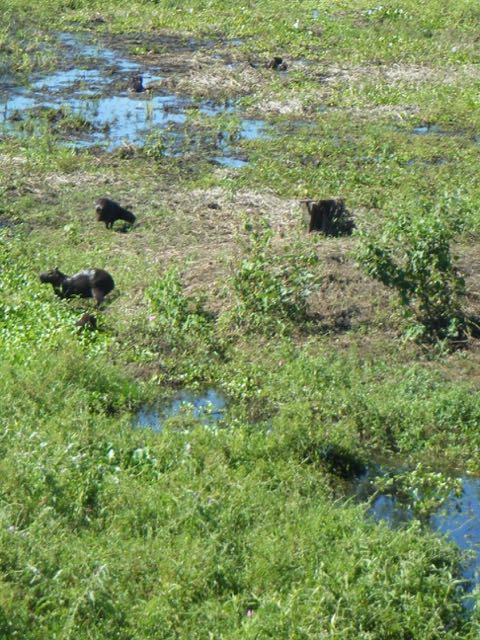 Next came wild water pigs. We had never seen these and so we were amazed so we stopped for a photo. My son decided to be funny and he ran off over the bridge.  But came back pretty quickly once we found out there were a few more dangerous wildlife around. 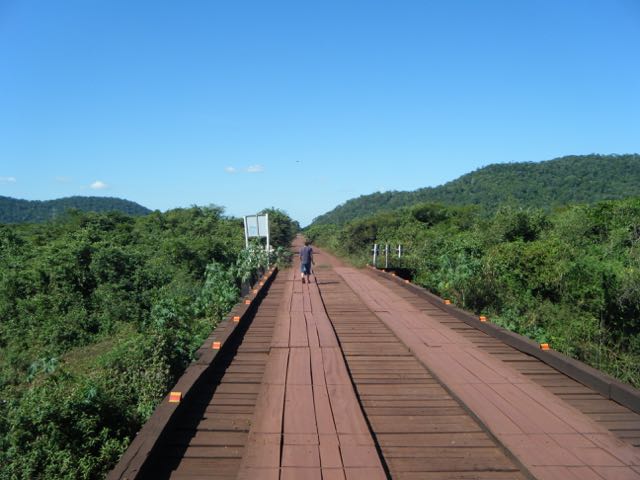 He returned quickly when we spotted a caiman below in the still waters here in the Wetlands of Brazil.  However we are assured they are very lazy and don’t eat people!  I hope he is right. 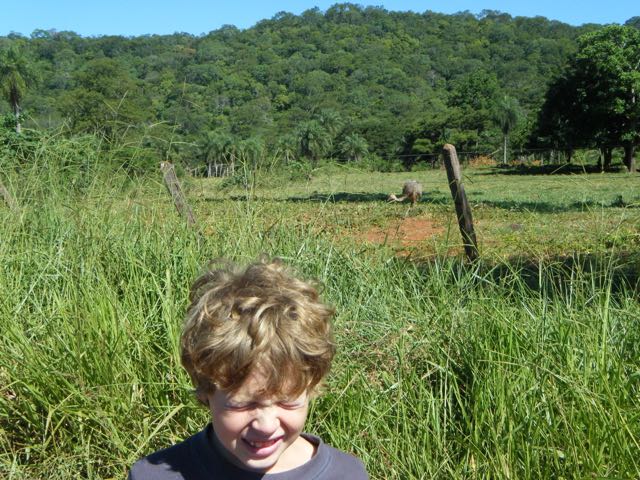 ©Exploramum and Explorason – Mosquitoes are everywhere

The problem with stopping in the Wetlands of Brazil was we had now let mosquitoes into the car. Mosquitoes here are in plague proportions and the worst we experience in the world. They were flying into our eyes and our mouths!  Far worse than the Amazon Jungle, and later, even worse than Africa! 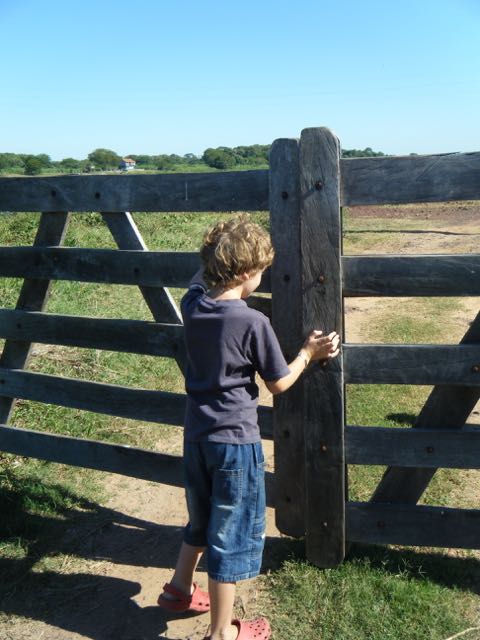 ©Exploramum and Explorason – closing the gates

We finally arrive at the river and it is a multi-gated property. We then drive through many properties to get to ‘The Lodge’. Explorason is eager to help and he soon works out the locks and closures on the many gates and is a great assistant opening and closing them all. 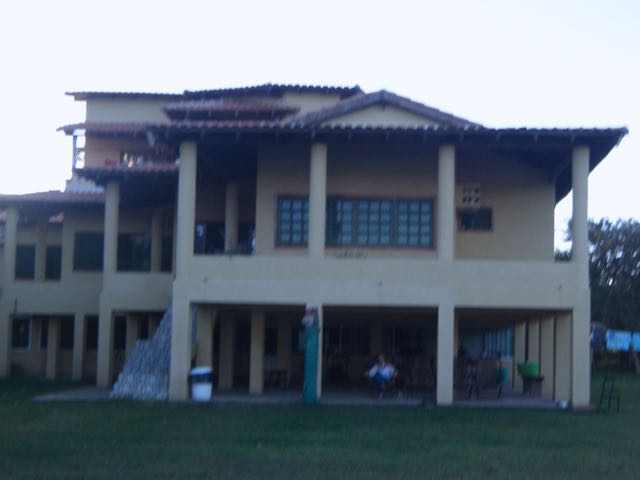 ©Exploramum and Explorason – The Lodge (photo by an eight-year-old)

Once we arrived at The Lodge, I have a quick rest in a chair on the undercover area but get ‘eaten alive’ by mosquitoes. The mosquitoes really are terrible and I do wonder how we will last the next few days here in the Wetlands of Brazil. 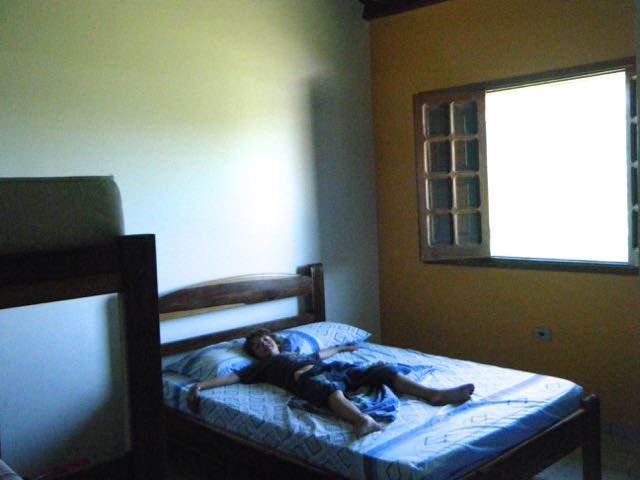 This is not the best photo of the lodge room and our room was actually wonderful. We had air-conditioning and an en-suite bathroom with hot water. The windows had double wood shutters although there were no curtains. It had a double bed, and two sets of bunks to the other side of the double bed – with nice linen, so we were happy. 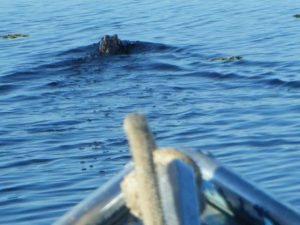 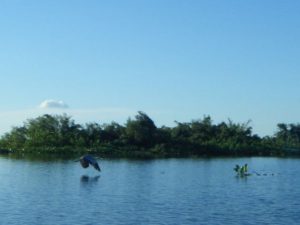 Lots of wildlife and birds

We get to unpack and have a quick rest in the room and the air conditioning seems to keep the mosquitos away.

We then headed out for a one hour or more on a great boat ride exploring the  Pantanal Wetlands of Brazil. It is just the 2 of us. We saw many caimans, and they were so close, you could look into their eyes. 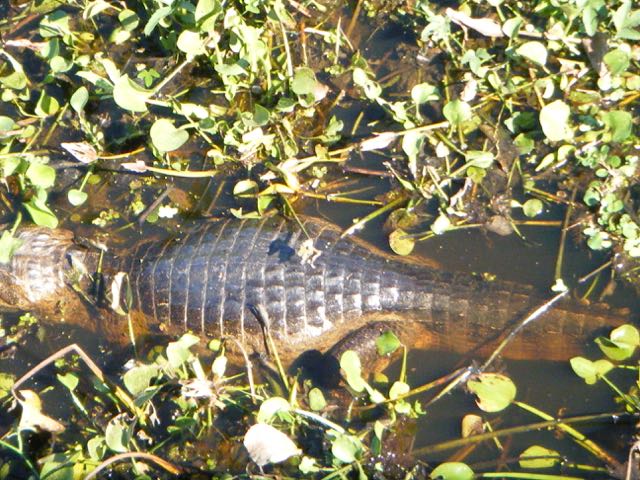 We were pretty amazed at the quantity of our Pantanal Wetlands tour and what we saw on our first day. The water was still and lovely, and we saw the amazing bird life too.

The only downside was that unfortunately, the guide on this trip could speak no English. 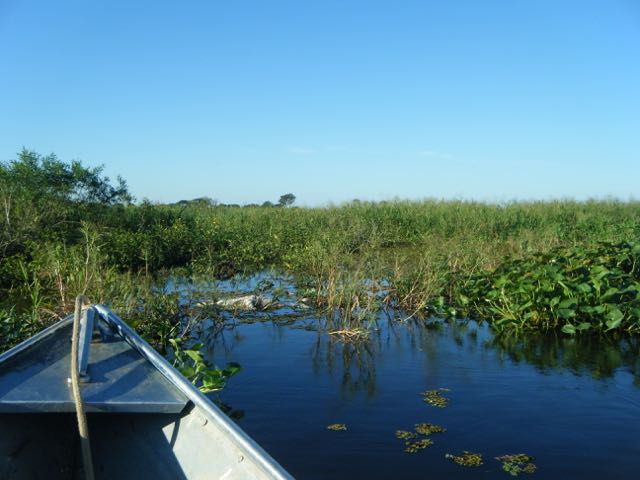 ©Exploramum and Explorason – out in ‘the tinny’

Ahead of the boat, you can see what we think is an ‘albino caiman’. Well, really it turns out to be a dead caiman as it has gone white in the water. The smell was repulsive so we motor on very promptly as it lingers in our nostrils! 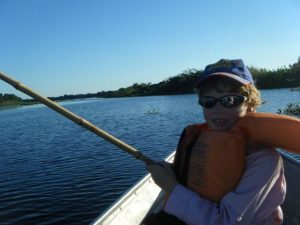 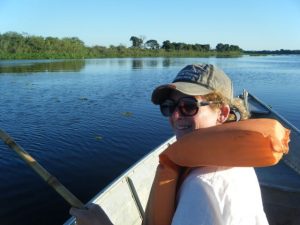 We then had some time trying to fish for Piranha. I had a go at fishing this time too which was different than our Amazon Jungle trip. However, we are told that the water had no oxygen so the Pirahna is not surviving, and so we gave up on this pretty fast. Later we find out that it is illegal to fish for Pirahna at the moment, and that might have been the real reason.

My son was not happy to return so promptly as he loves to fish, and we had to head back to The Lodge. 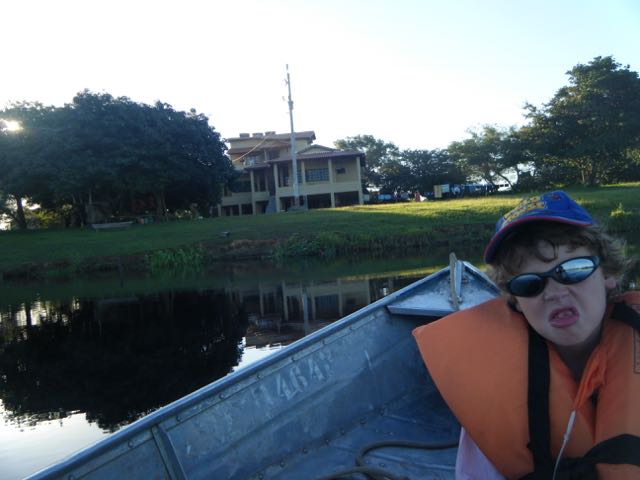 Explorason decides to sit in the room and play and I head downstairs dressed a bit like a hippy from head to toe in protective clothing to go and watch the evening sky over the Wetlands of Brazil. 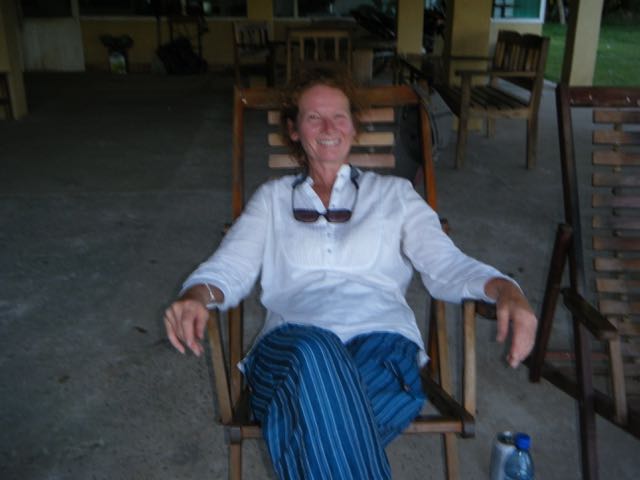 Trying to relax but the mosquitoes are terrible

The lady who cooks offered me a cold beer. I was ever so thankful as we had no cool drinks with us and our bottles of drinking water had become warm. But as I sit outside, once more the mosquitoes join me in a quest to suck my blood, so I headed inside.

Sunset Time at The Pantanal Wetlands 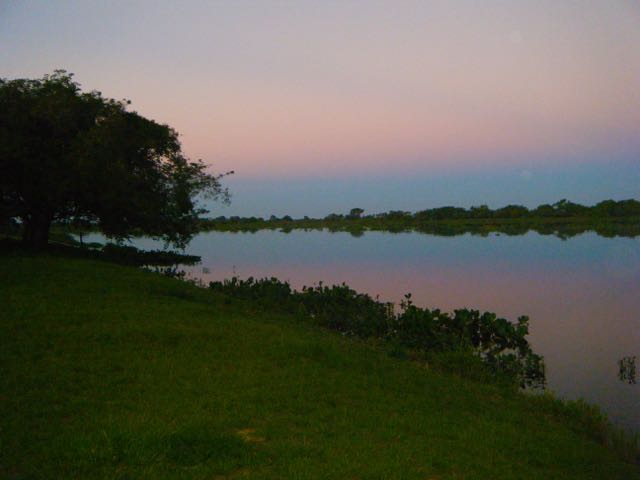 As the sun went to bed in the distant sky, the wild and bird life became active. I sit inside behind the mesh windows and look out. 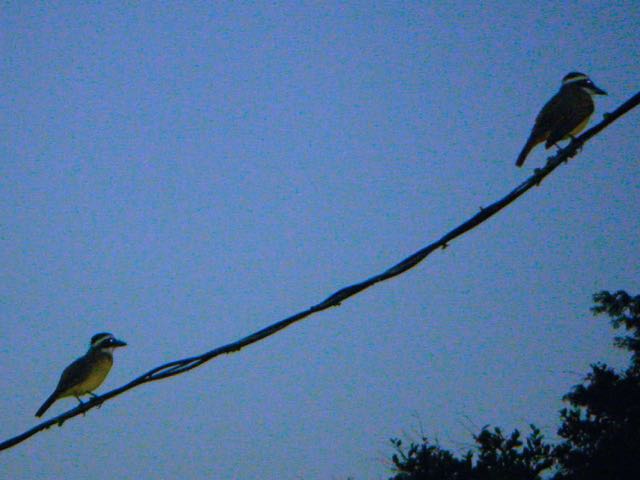 A caiman came right into the river bank edge in front of the lodge and I am glad I am not sitting outside any longer. Birds begin to sing their evening song, and suddenly, bats flew out of the inside roof! YIKES! 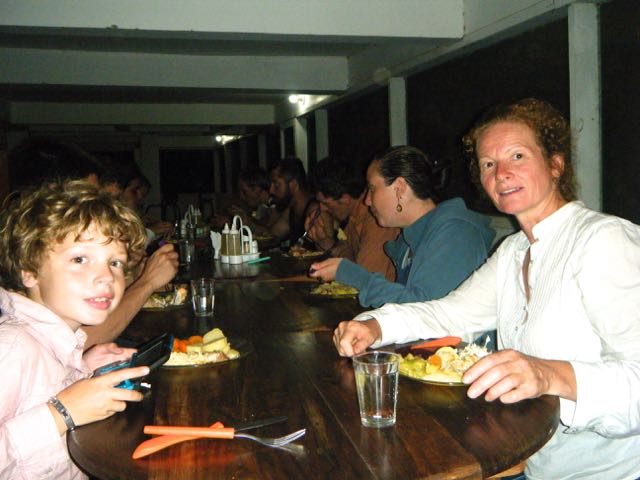 The river was really quiet and beautiful and I head inside to find Explorason enjoying his playtime on the bed. It was now time for dinner. Dinner is included in our tour package too, just the drinks are extra.

We both had a little sunburn from our afternoon boat ride exploring the Wetlands of Brazil, so I feel a little embarrassed, but soon I look and spot quite a few more red faces.

We meet some really lovely people at the dinner table. Everyone was fantastic and we all talk (which is lovely after the terrible time we had with a tour group in the Amazon jungle).  Seated around this long table is quite a mix of nationalities. I think we will enjoy our three days on this tour!  They accept Explorason and make him feel welcome, and I fond that lovely too. 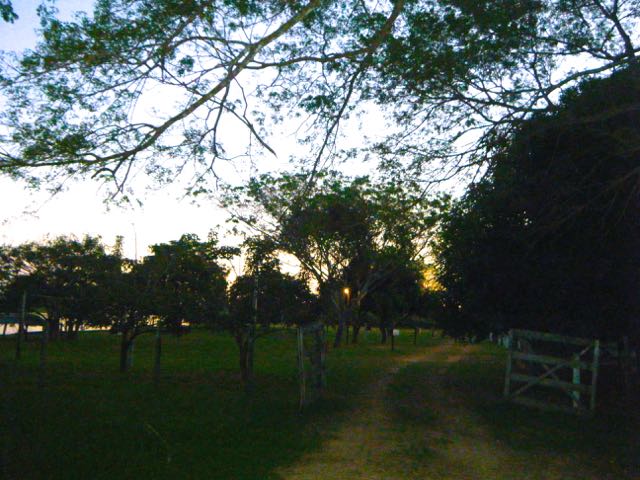 ©Exploramum and Explorason – A lovely property here in Brazil