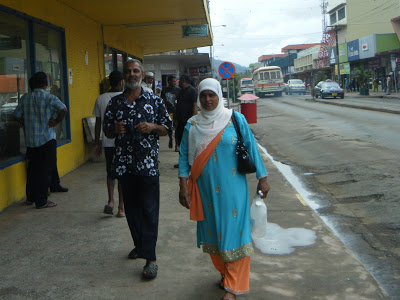 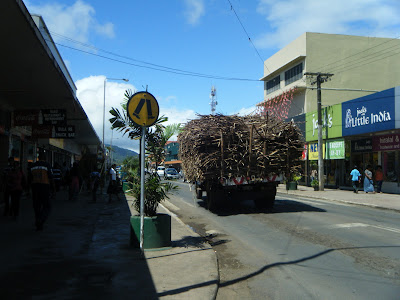 Yesterday we woke at 5:30 a.m. in preparation to walk to town, and get the early bus to Labasa (pronounced Lambassa).  We have been house sitting and are part way through, based in Savusavu. 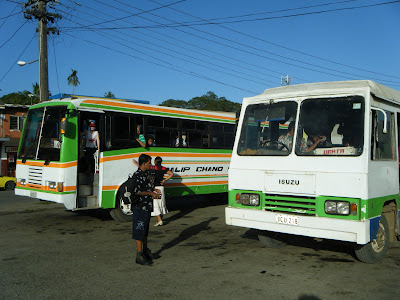 Our friends Marilyn and Dave who own a farm here were also on the bus for part-way, and it was a long trip – over 3 hours to the other side of the island. We shared lollies and gum with kids on the way. 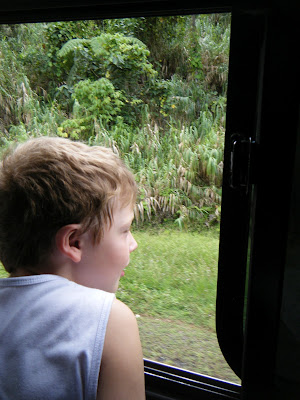 The countryside was mountainous and awesome. So much to be seen in such an unusual family travel situation. Not even our own luxury travel experts could prepare us for such a ride. because there was a very little luxury to be had, but the only mode of transport there is.  I am happy that even though boredom at times tried to creep in, my son was kept busy by the picturesque view of the hills and mountains. That is the comfort I often need while on such a unique single parent travel journey with him. 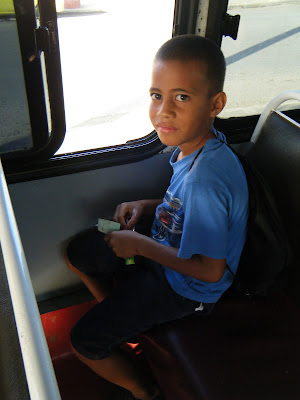 ©Exploramum and Explorason – meeting other children

The roads were windy and very steep and sometimes the bus nearly stopped going up and started to head back down – it was so steep. 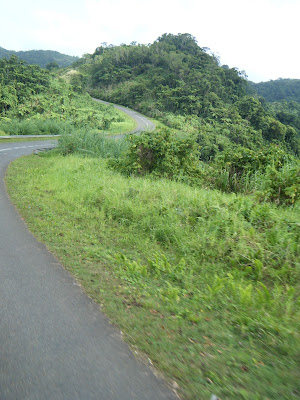 Although windy, it was lovely and lush and green vegetation. 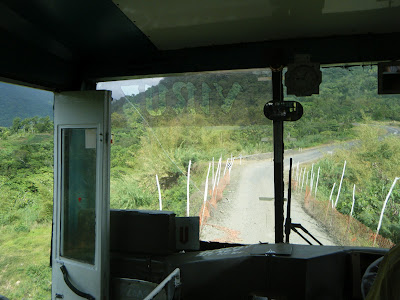 The houses were in villages off to the sides of the main road and had a mix of Fijian styles like the one below.  Washing was fluttering in the wind and they seemed neat, even if basic. 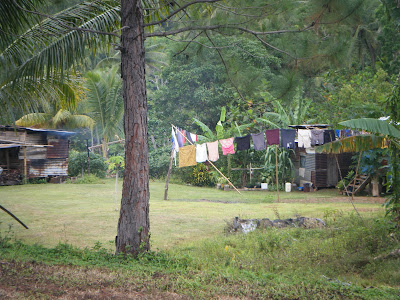 Shops are operational but are in unfinished buildings. 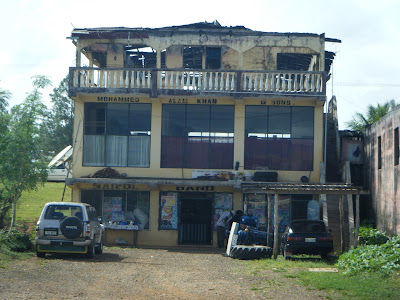 And when the bus stops, people sell Indian spice snacks to us through the windows. Later on, in our journey to other countries, we discover this is common. 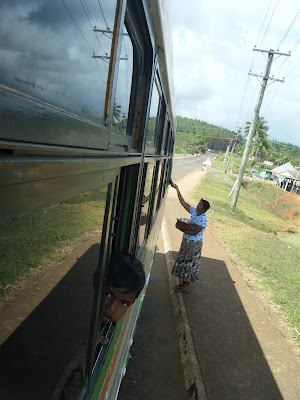 We had a few tasks to complete when we arrive in Labasa, as it is the capital town of the island, and a lot bigger than where we stay. However,  on arrival, we were a bit shocked at how hot and dusty it was.

The town of Labasa is set along a river though it is a busy town for the working population and not a tourists town. It felt like mini India, with sugar cane trucks driving through the main street of town. 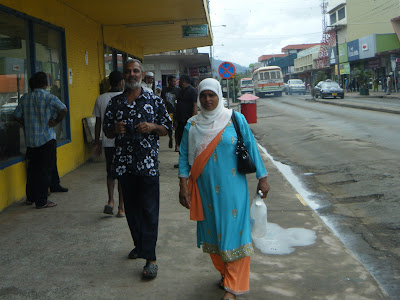 The bus depot was crazy, and so full of buses and beeping horns as the buses continually arrived and departed. 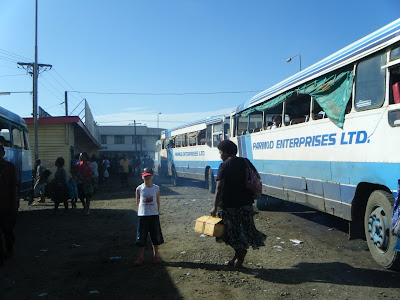 Throughout the day, we saw no other white person in the streets of Labasa. This meant we were talked to a lot more and treated really well by the locals. People just stop and converse with you – it is weird, but can also mean we met new nice people here in Labasa. 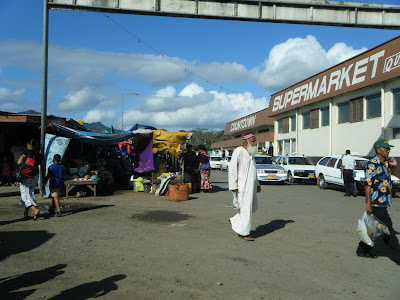 ©Exploramum and Explorason – the streets of Labasa

It was a complete mix, but mainly Indians. We had a great lunch at “Coffee Break” which is set in the North Pole Hotel and was really clean and neat. It was so cheap. My son had an adult size chicken schnitzel and chips, and I had an Indian potato curry & rice etc. (big enough to feed two people), plus drinks, and the whole lot came to $7.50 AU.

In a good Fijian restaurant you will find a bowl to wash your hands before you eat, right where the food is served – I guess as the Indians eat with their hands? SO we found Labasa to be quite clean. 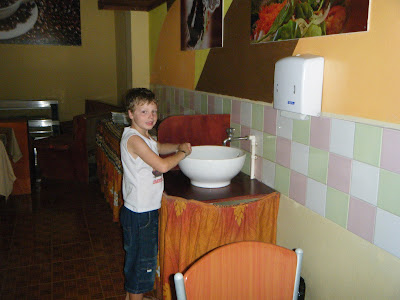 As we had been up since early, and it was such a hot day, my seven-year-old son needed a sleep at lunchtime, and it was a cool and air-conditioned place. 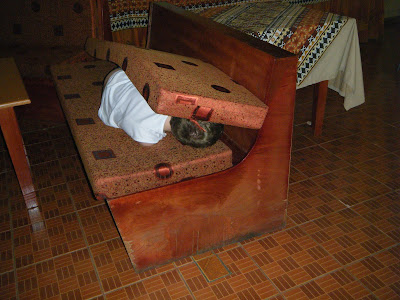 We discovered that Labasa was a really interesting town, with live chickens being sold from woven palm leaf baskets outside the bank. 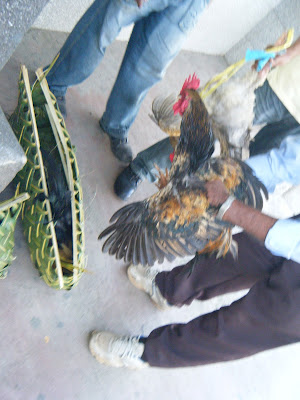 ©Exploramum and Explorason – chickens for market

The man took time to show Explorason how he catches and cages them in the woven contraptions. 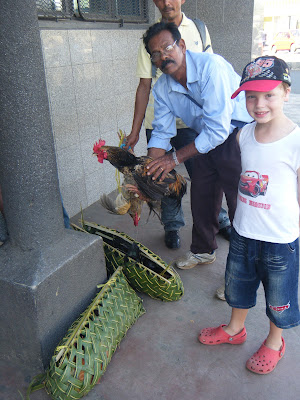 ©Exploramum and Explorason – chickens in a basket

A Fijian lady really wanted us to come and stay at her village and asked if we could take her photograph and come back again.  She was just bubbling with joy. I loved her warmth. 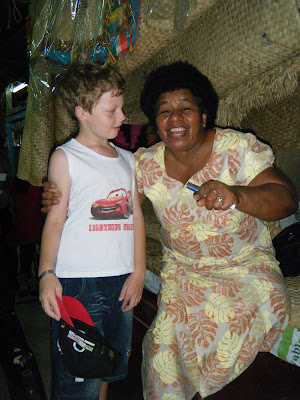 Many Indians pinch and brush the cheek of my son – he hates it, but they like to touch the white skin of a child. We have a great time exploring. 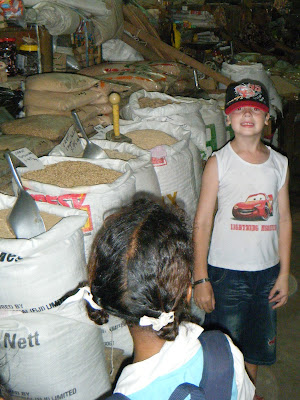 We had brought from Australia an (adjustable folding) walking stick to give away, and felt today was the day. In fact, I had felt from last night to get up and put it in my back as someone we would meet needed it. 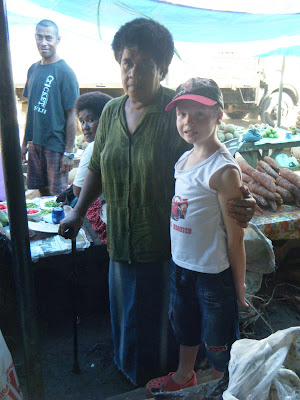 ©Exploramum and Explorason – giving a lady a walking stick

So we were really pleased that right at the end of the day when we were in the market, we found the person it was meant for – a lady who could hardly walk. We had to ask around, and when we found her she was sitting.  On giving it to her, we had quite a crowd. 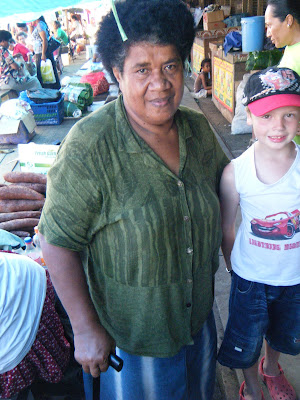 ©Exploramum and Explorason – a random act of kindness

“God is good” was the reply from many ladies in the crowd to the lady we gave it to. It was the best ending to our visit to Labasa.

We climbed back on the bus, and listened to the thumping Indian music, and watched the crowd change from students to workers, and then to ladies from the market, as we meandered over the hills, through the towns back to our town. Most of the time there were 4 to a seat, and many would talk to us, and the kids would play games together with my son. 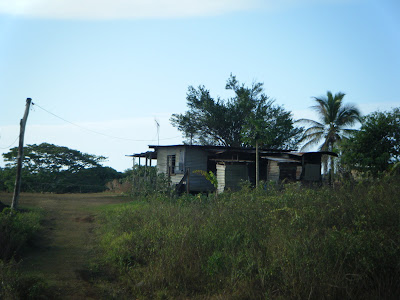 We wind back through the changing houses. 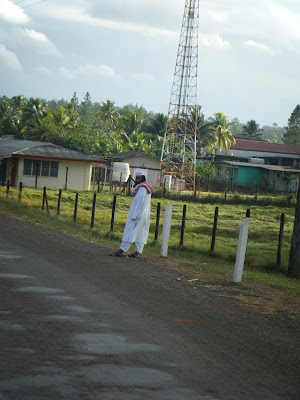 And the changing people. We arrived in the dark – hot and tired, and in fact, I had become ill from heat exhaustion and not drinking enough water, and have had to rest all day on the next day.

Labasa was certainly an experience, but we really appreciate Savusavu – a town we are staying in known as the ‘hidden paradise’.
Questions and Comments