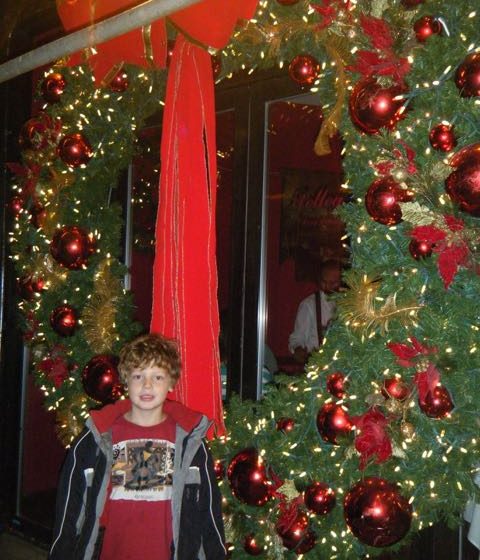 – you can never see it all – especially at Christmas –

New York City at Christmastime is crazy but so much fun as we hit the subway and head for Manhattan. The weather in New York is warm with blue skies. It is conducive for our family travel. This is the place most luxury travel experts recommend to everyone planning a trip to the region because the magic of Christmas is in the air. Anyone on a single parent travel would attest to the fact that this is the place to visit when in NewYork.

The Empire State Building viewing area was packed. We had to fight to get to the edge and there was a lot of pushy tourists. My son enjoyed popping quarters in here as he looks out across the city skyline!

Don’t do a bus tour

We attempted another go for the bus tour – a waste of time. So we were dropped off at Chinatown. There, next door, are two streets you need to go wandering down at dinnertime.

We dined outside at Casa Bella which is famous in Little Italy.  It was another special time. The bill or check as Americans call it wasn’t good though, but sometimes you pay for the memories 🙂

By the following day, I can proudly say my son could work the subway without me if he was lost.

We head into Macy’s for the Christmas Windows – and Santa-land. The wooden escalators were the biggest hit.

There was a long wait to get into the Christmas area and Santa.  We were told 30 minutes, but it was well over 1 hour. The good thing is that the crowd moves through the displays. This keeps kids occupied and parents chat together.  Queues are as hard as a single Mum. You have to co-ordinate toilet time before you start. Plus being winter, you end up carrying thick quilted jackets or coats and feel like a pack-horse.  For those in Adelaide, Australia, enjoy David Jones Magic Cave. It is comparable I think.

From there we subway it to near Central Park. F.A.O. Schwartz – a famous toy store well worth the visit that has also been in many a movie. You have to queue to get inside and it is so packed, but the Lego area is fun!

The Big Piano inside here is another line-up and a big hit with the little ones. You will note in most photos my son may be the oldest. But keep in mind Americans are all still in school still the week before Christmas.

Next day, we are off to Central Park.

We have a wonderful Pedi-cab through Central Park. Negotiate price, how long, how far, and tip before you go with the cyclist. You think you don’t want the stops, but for 1 hour this guy went flat out. He was fantastic with his information and you need to stop for photos and he needs a rest too – try to be fair to your rider.

We love New York City at Christmastime especially the Christmas street displays and decorations, so we wandered down 5th Avenue and other nearby streets.

As my son is collecting photos for his blog on Big Things, we enjoy all we find – like these giant Christmas lights which look a bit like lipsticks.  Everything is big in New York!

We wander back to Time Square as this is the place to be in New York City at Christmastime. I think we end up here every day as the interactive displays are so fun. This one lets you put your face in the Statue of Liberty; on the side of a bus, and while driving a car.

Our last days are here in New York. We have a bit of downtime at the Library in Manhattan. What an amazing building.

They have an interactive exhibition which is free of lunch in New York. This sounds lame, but there are dispensing machines, free recipes and a lot to learn. No pictures allowed, so time to just enjoy that one.

After this, we did head next door to the library to skate at Bryant Park. But you need to bring a lock and it didn’t have the same feel as Central Park, which we had seen other days. So we walked down there and it was more expensive but fun. Also can save $$ if you bring your own lock. My son had never ice skated before. He was frightened and didn’t know if he wanted to do it.

By the end of the time skating, and I am talking maybe 5 hours, and some hot chocolate power, we were still going.!  I had sore ankles and had rubbed the back of my heels raw. Explorason skated on confidently till dusk. He didn’t want to leave and we wanted to try to come back and skate another day.

Next day my feet ache, but on we go as New York City at Christmastime is filled with things to taste, see and do. We are running out of days and there is still so much to tick off our Bucket List for NYC. So we hit our next destination.  In the end, we are out of steam and have to return the next day.

The Rockefeller – Top Of The Rock

Now, this Rockefeller Center building has 3 viewing levels. Someone had told me it is better than the Empire State Building and I have to agree and we loved it up here.  Way more relaxing and a lesser crowd than the ESB. More viewing spots too, plus you also get a photo for only $5 and we found this a lot more fun.

As my feet ache, we decide to go for pedal power – also known as Central Park Sightseeing.  We are approached by a couple of blocks from Central Park for bike hire and it is a great way to explore New York City at Christmastime.

We got a great deal on the bikes and he was so polite. We hired this for two hours and it was a blast but it had a fault with the cog.  So a tip here is to check the bike before you go too far.

Bikes are limited to a bike lane, but we shot off on a few quiet paths to see the sights of Central Park too.

We cycled the complete way around Central Park. We took both the inside and outside road and this was great as we saw so much of New York.

We wanted to walk back through NYC and see the lights. Back to Rockefeller Centre, we go.

Now near the Rockefeller Centre is the Nintendo Store and parents, go here for your kid’s sake as it is so fun. Free games and you sit and talk to other Moms.  We went here twice and it was great. It also gave my son time to play with other kids.

Next day we have in our AirBnB.  Time for some basic schooling and catch-up emails. Time to plan what happens after New York City.  My son needs a down day to rest and play.

Now we have heard about the supposedly best Pizza in New York – Di Fara. I read several reviews and there seem to be 5 best places, but this one is only two subway stops from where we are staying.

It is $30+ and this is 2012 and to this day that is expensive, but then we pass a place that has pizza for $150 as it has been blessed – no lie.  It is good pizza, but I think he is too heavy in olive oil on the top. Order one with no olive oil on top and you might have the best pizza ever.  President Obama has eaten here so it is good. The guy makes each pizza by hand and fresh as he grates the cheese, cuts the herbs etc. He is nearly 90 years old!

Here is our pizza pie and it is massive so that is why it is over $30.  There is enough for taking back to the Airbnb so the value is not that bad if you consider you are getting two meals.

Saturday sees us back in Manhattan. We explore in and around Grand Central Station. My son learns lots here and loves it!  He has already decided he wants to live here later in life.

Off to the opposite end of town and away from the craziness of New York City at Christmastime. During our bike ride, we had found the Solomon R Guggenheim Gallery. It has a Picasso Black and White exhibition when we are here so it is busy. This gallery is also seen in Mr. Poppit’s Penguins.

Be Inspired By Movies

Now seriously – we have found kids movies that contain a place as a great inspiration. We have over 300 movies on the computer, so we often watch one before or after we go to a place. It really makes it come alive.

For a security deposit, we decide to use the kids’ art kits. This has cards with things to find in the art exhibition which is a weird security deposit, but so be it. We also need to make cubism art pieces. We spent over 3 hours here. A great world schooling experience and a great time to do things together too.

We enjoyed some of the unusual displays in other parts of the gallery too like the inside of this log.

Next, we have yet to see the American Museum of Natural History. This is right across Central Park.  So we have a great walkthrough and it is perfect to get say from the crowded streets of New York City at Christmastime.

The Museum is a donation only.  Nice. We are late in the afternoon when we get here. We had stopped at a playground in Central Park on the way and another place we had seen in movies.  Boys need to get their energy out to behave right in Galleries and Museums.

This Butterfly Room is amazing. If you know you are going here, wear green. Also, butterflies respond to smell. Some kids were covered, we only had a few lands on us. Also, this room is HOT, so maybe wear a t-shirt.

Night at the Museum is a great movie to watch as it is set here.

We meet a lovely Grandma and her grandson and spend time talking with them. The boys love ‘Gum Gum’, from the movie NATM movie and the kids enjoy each other’s company.  I must say, we have really enjoyed meeting others along the way, and this boy showed me just how lovely some kids can be.

We ended up in the Learning Center. Explorason knew today was a learning day of world schooling. The staff are great and help the kids with the assignment, so it gives me a break.

It is dark and we head home. Our last day in New York is Sunday. We so wanted to go to an Afro-American Soul Gospel Choir.

We found this great church and it took us two van rides, a bus, and a long walk over 1.5 hours. It is so big, they have three services. We managed half of the 2nd one. Then all of the last one.

Christian Cultural Centre is way at the outskirts of Brooklyn. Fantastic time!  Do go there if you are coming to New York, plus we were treated so well.

What a great end to our time in New York!

“Oh Sunshine! The most precious gold the be fou

“A sunset is the sun’s fiery kiss to the night

“Is it possible you feel like a younger woman wh

“Just one minute can change everything”. Explo

I’m in a tropical state of mind because this pla