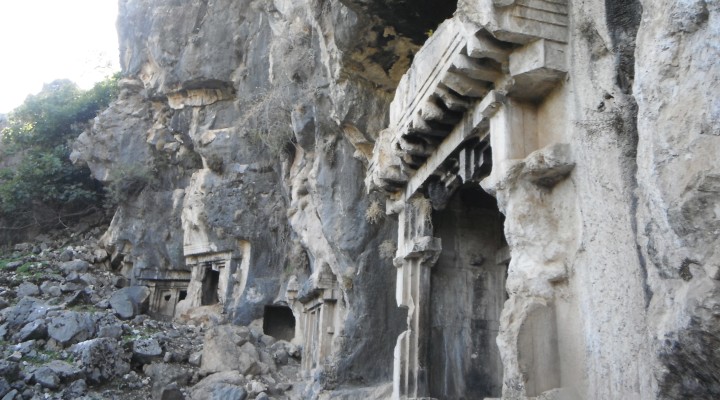 We are off to explore the local area where we have been housesitting in Turkey.

I have been researching a few of the “things to see” and have read about hillsides filled with carved rocks tombs, that at first sight look more like elaborate doorways to hidden houses.

You might have heard of the book or movie ‘A Room With A View‘, but these are

A Tomb With A View – Pinara

On the way, we get lost, which is all part and parcel of exploring, and rarely bothers me. Our guidebook wrongly leads us to believe it is five km past the ancient city of Ancient Xanthos, so we head there first.

Xanthos was the capital city of the Lycian Federation and its greatest city for most of Lycian history.  Ancient Xanthos stands at the top of an elevated area within the Xanthos Valley. 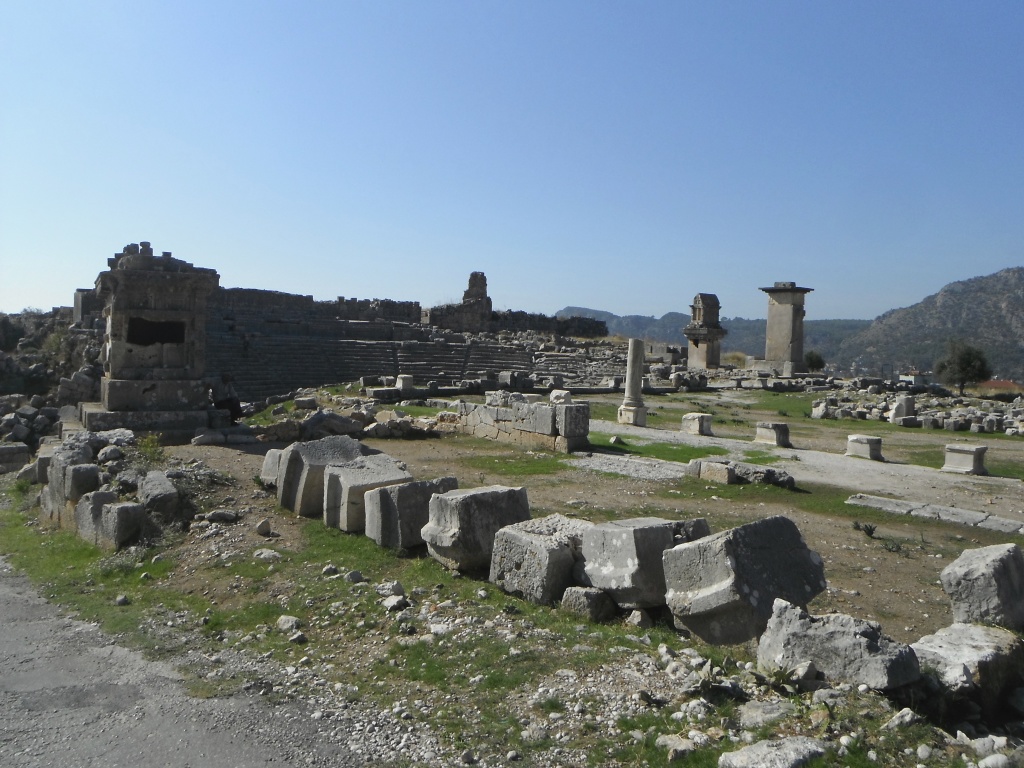 So I take the opportunity to have a quick look around, and we drive the car through on the way out, and as we do, and collect some great mini pine cones to paint for Christmas.

From this elevation, you can have a supreme view of the valley surrounded by the spectacular Taurus Mountains. I guess this Turkish man was just doing that! Resting in the shade, and enjoying the stunning view. 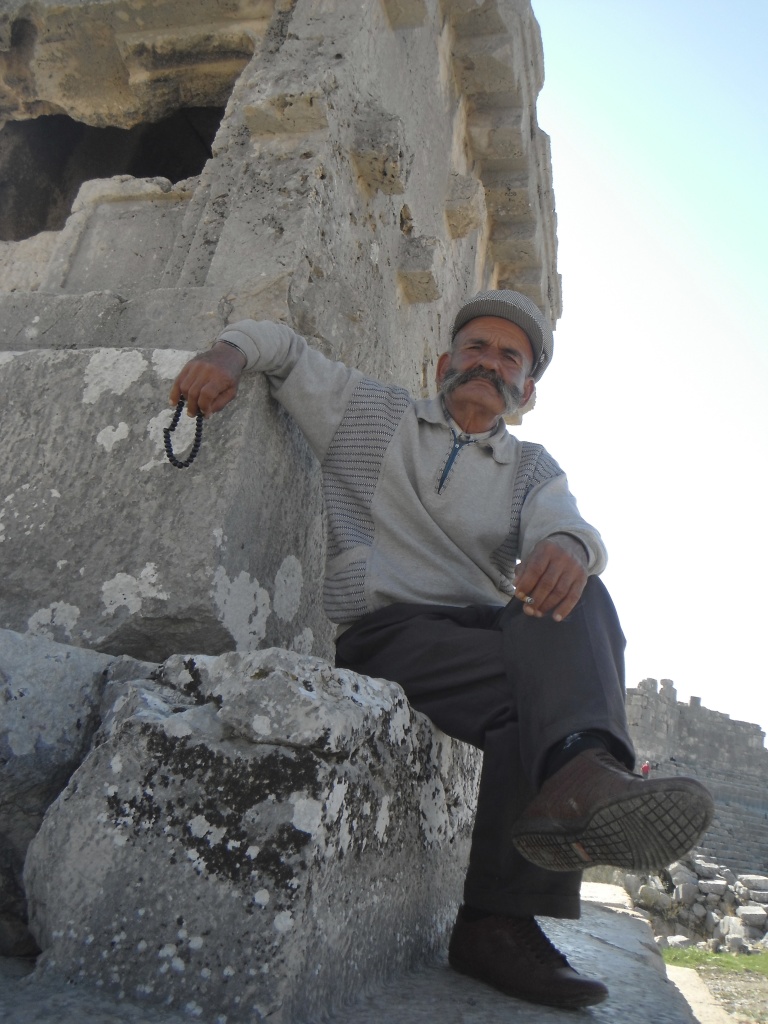 Exploramum and Explorason – a Turk resting at Ancient Xanthos

As we head along the road, we see a lot of stoves and so I stop to investigate. Here they sell boiled corn, with a nice cup of hot tea. 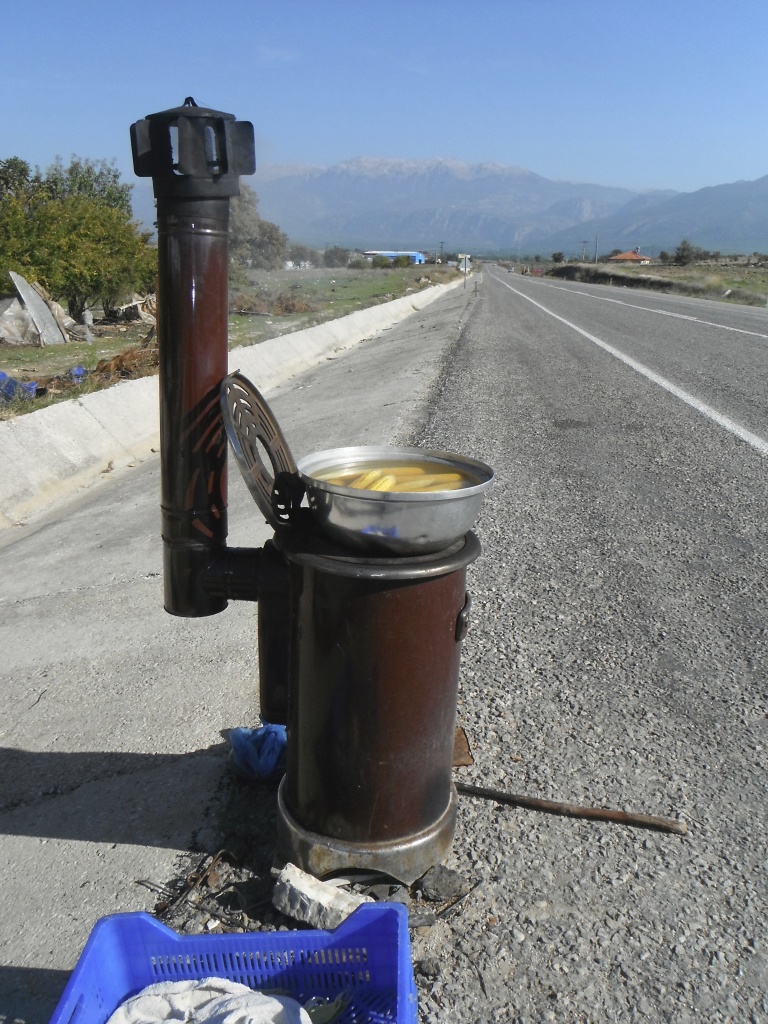 In the distance, there are snowy mountains, yet here we are in a t-shirt and shorts.  Europe is in its winter season.

Mind you some argue Turkey is NOT in Europe. In fact, it is Eurasia.

It is considered the gateway to Asia, and rests partly in Asia and partly in Europe.

So you can win both arguments – just make sure you don’t say it is the Middle East, as Middle East is NOT a continent!

These are the little things you learn when you world school your child.  I think I get just as much fun out of learning, and sometimes more than Explorason sometimes. 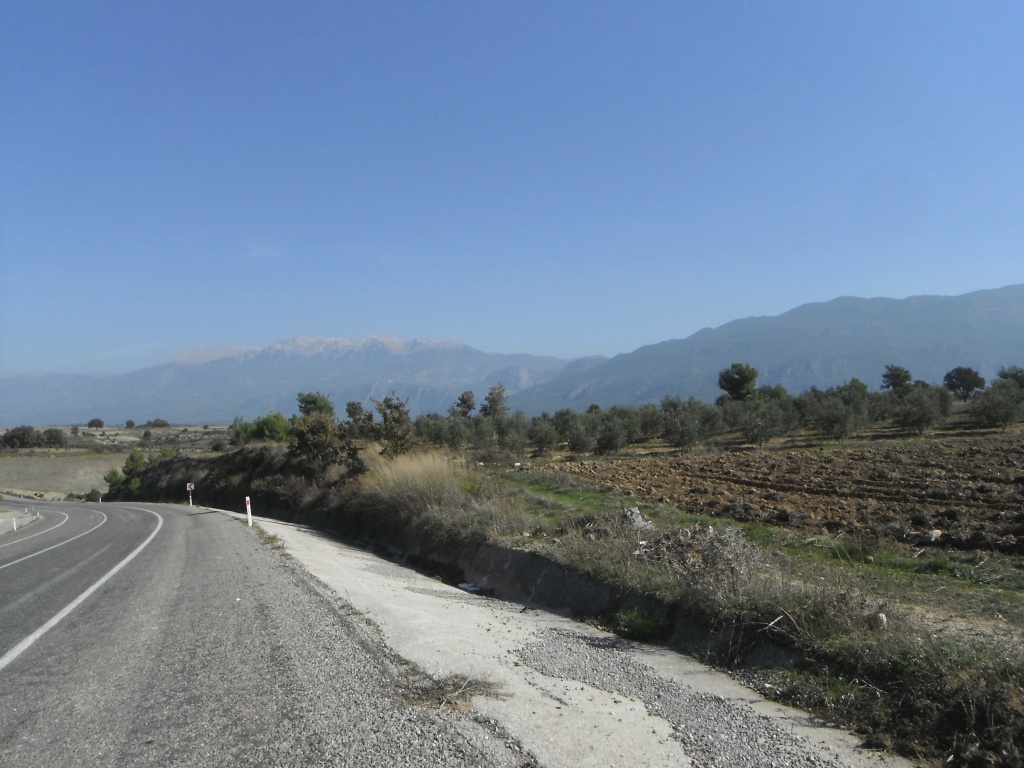 Exploramum and Explorason – snowy mountains in the distance

So where in Turkey are we exactly?  Here is the google map link.

We see a small sign and in fact, we drive right by it and have to complete a U-turn.  It is a small side road, and this is not a well known archeological site.

As we head down the road we stop to see what the locals are growing on their farms.

These people are picking red beans. 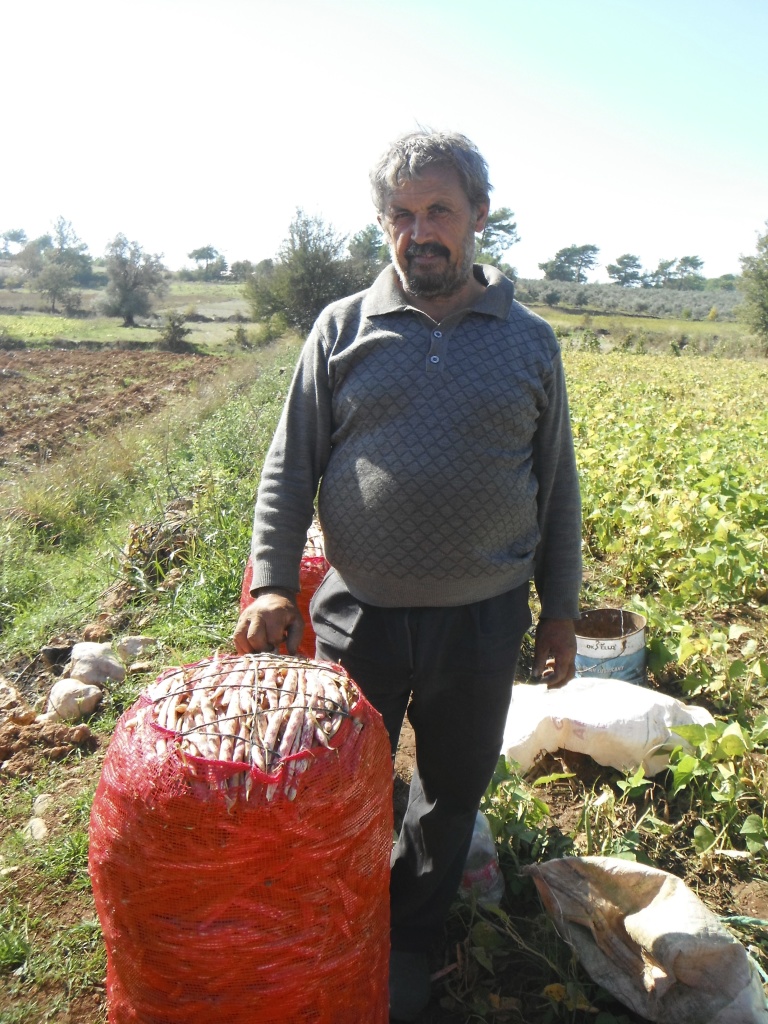 I love this photo!  I wish I had a picture of what I remember of their black toothed smiles. 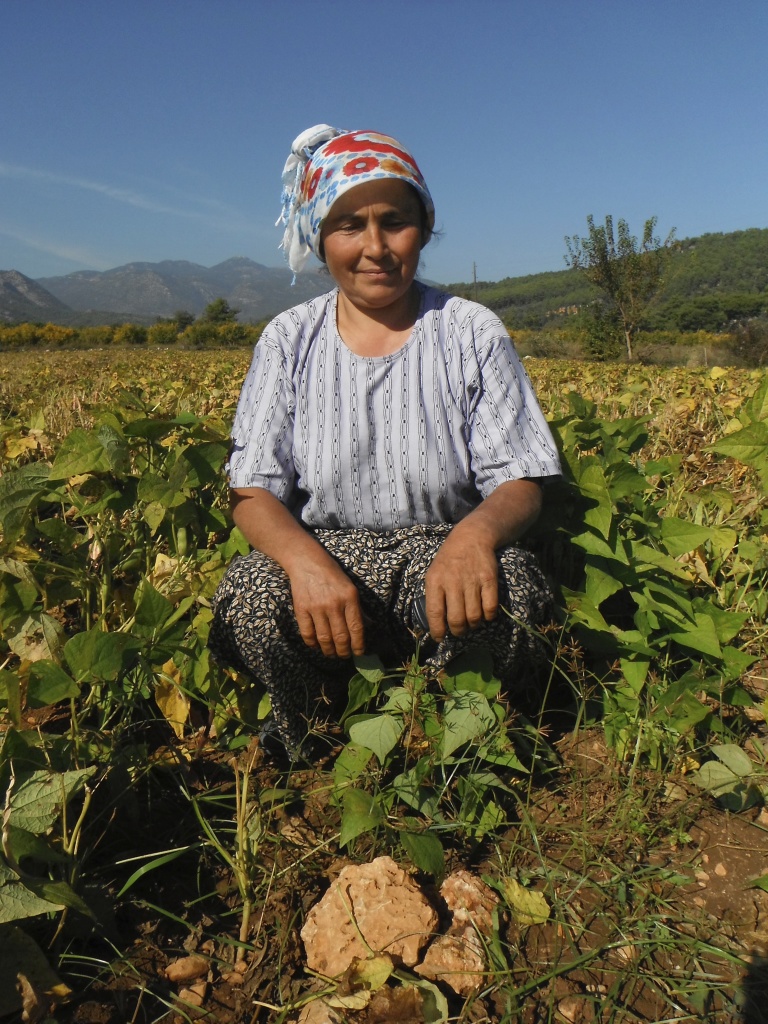 We turn off and wind up a really bad muddily and slippery gravel road.

In fact, we get to one point and I wonder if we should go on. This is probably why this place gets so few tourists.

But as we ascend, we discover the hills of Pinara beyond us. And we can see the tombs dotted in the distance, and carved into the hills. 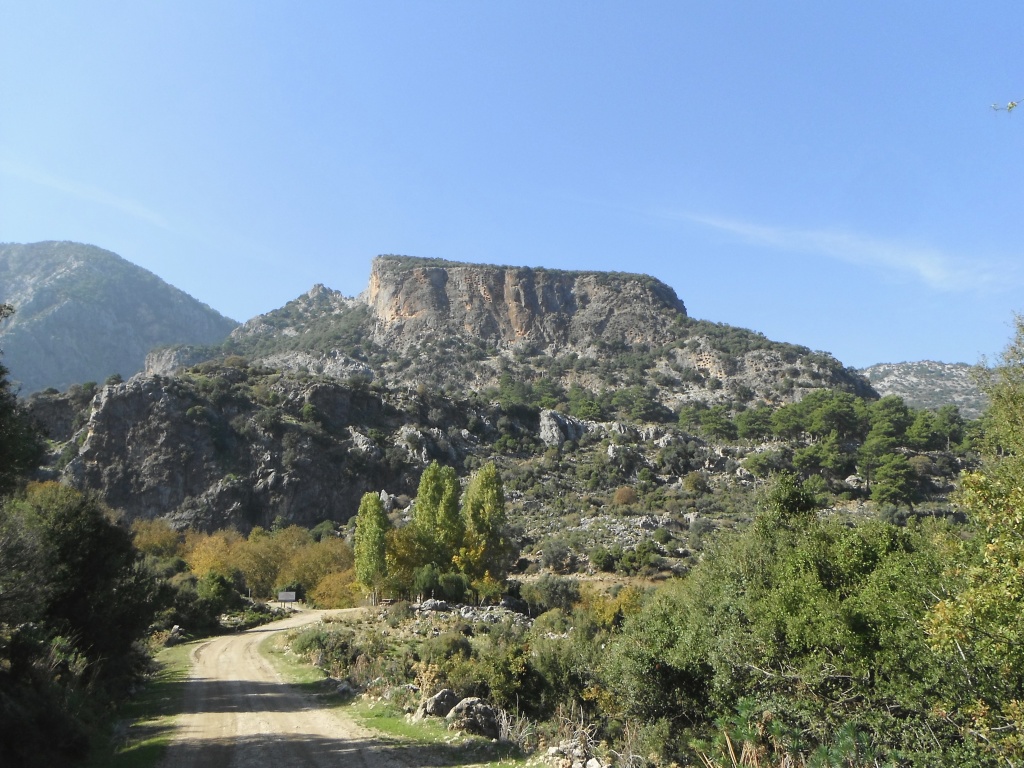 Exploramum and Explorason – Pinara in the distance

Explorason stops and plays with a few panoramic snapshots he wants you to see from the visit. Here is one of them – I’ll add others later.

I want to encourage him to take photos, as it engages him at the moment, and after all, technology is a very integrated part of a child’s life now.

We arrive and it is a deserted place. There is an office to buy tickets, and it is open, but no-one is in site.  We park the car and use the toilet, and call out to see if anyone is around. The hills echo our voices, so we play and practice different ‘echoes’ for a good ten minutes. It is important to stop and have fun as it presents itself.  Alas, our echoes bring no-one, so we decide to go exploring. We see signs to two different ways for the tombs.

(I figure if we get lost ‘someone’ will see our car.)

In hindsight I discovered the best tombs were on the left sign, and we took the right sign, but we saw them in the distance.  There are no paths, so it is really weird.  We climb up. Across small pools of water, and up and up we go.

We discover the first set of tombs.  I don’t know how many tombs there would be in total in these hills, but I could guess one thousand? 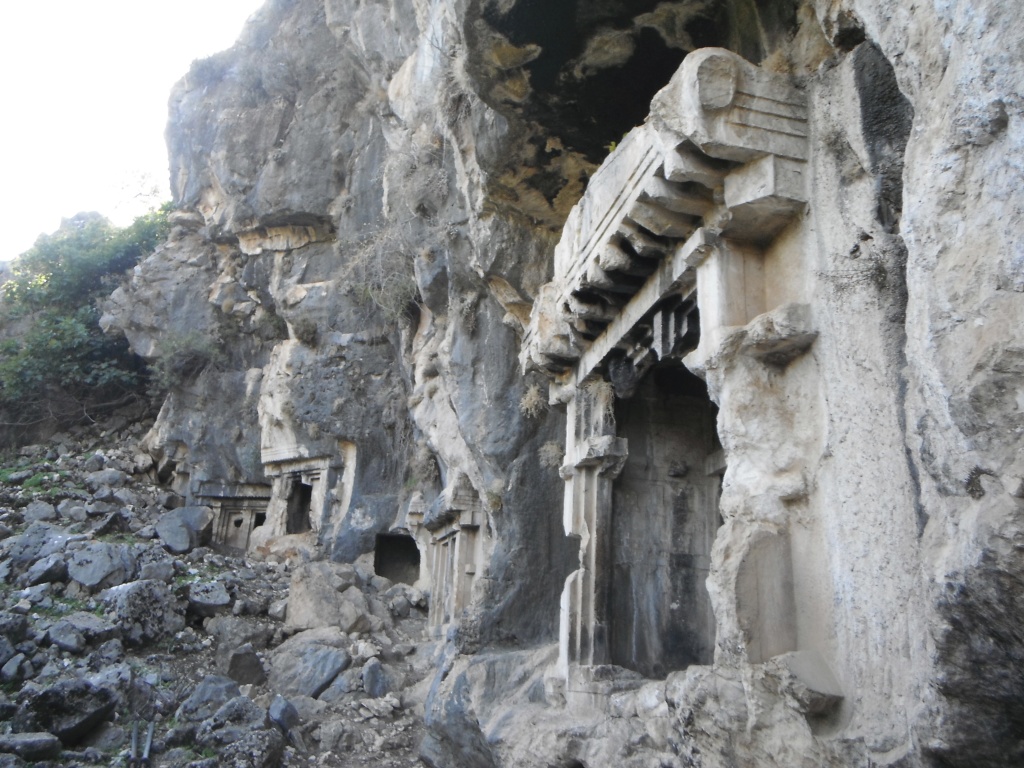 Just have a look at this!  Explorason thinks it is so cool !!!!  We feel like we have discovered a lost world.  He thinks this is the best archeological site he has been to.  It is not just a boring ruin. This is an interactive, world-schooling moment, and I’m pleased he is enjoying it so much. 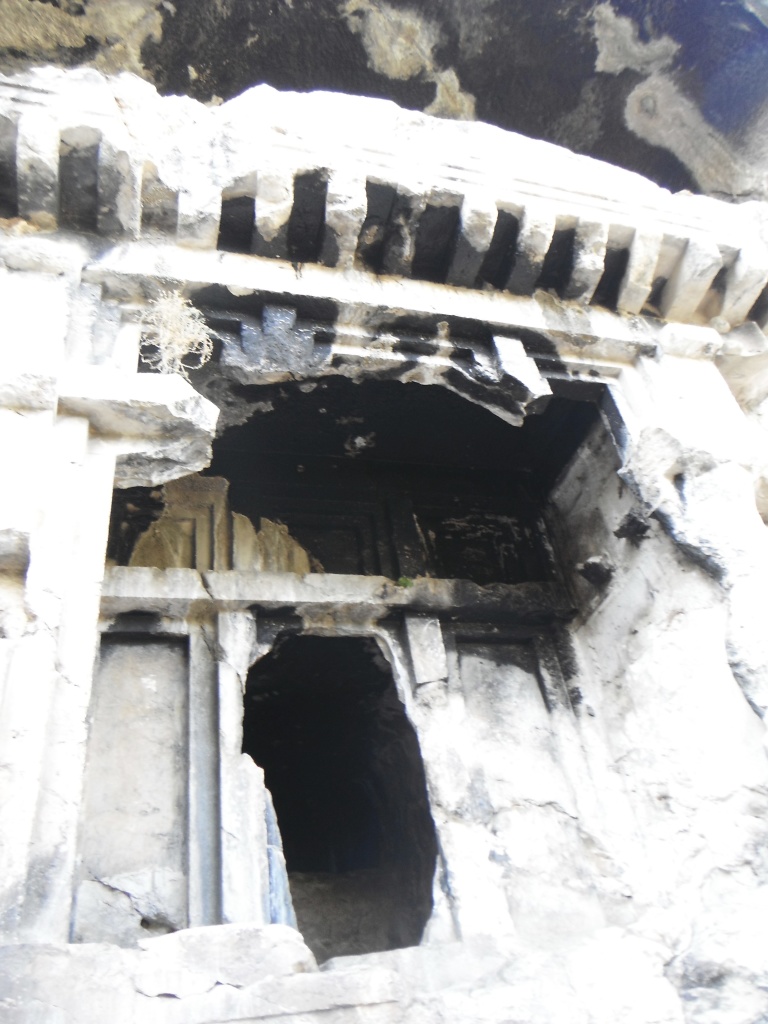 Exploramum and Explorason – a closeup of a tomb of Pinara

Pinara also was an ancient city and ruins can be seen in the photo below in the distance.  History tells us that the city surrendered to Alexander The Great in 334 BC.

Pinara became a Roman City in 133 BC. The city enjoyed prosperity during Roman rule but was badly damaged by earthquakes in 141 and 240 AD.

Pinara was the birthplace of Nicolas of Myra otherwise known as Saint Nicolas – the original giver of Christmas presents to children and the poor, or Santa as some call him.  Now we find this interesting, and we want to learn more about this.  So we are going to find out more about the real Santa.  I will blog on this separately.  Explorason is a believer of Santa, so he finds this pretty cool!

Sadly because of repeated pressure from invading forces, the city of Pinara became uninhabited in the ninth century. 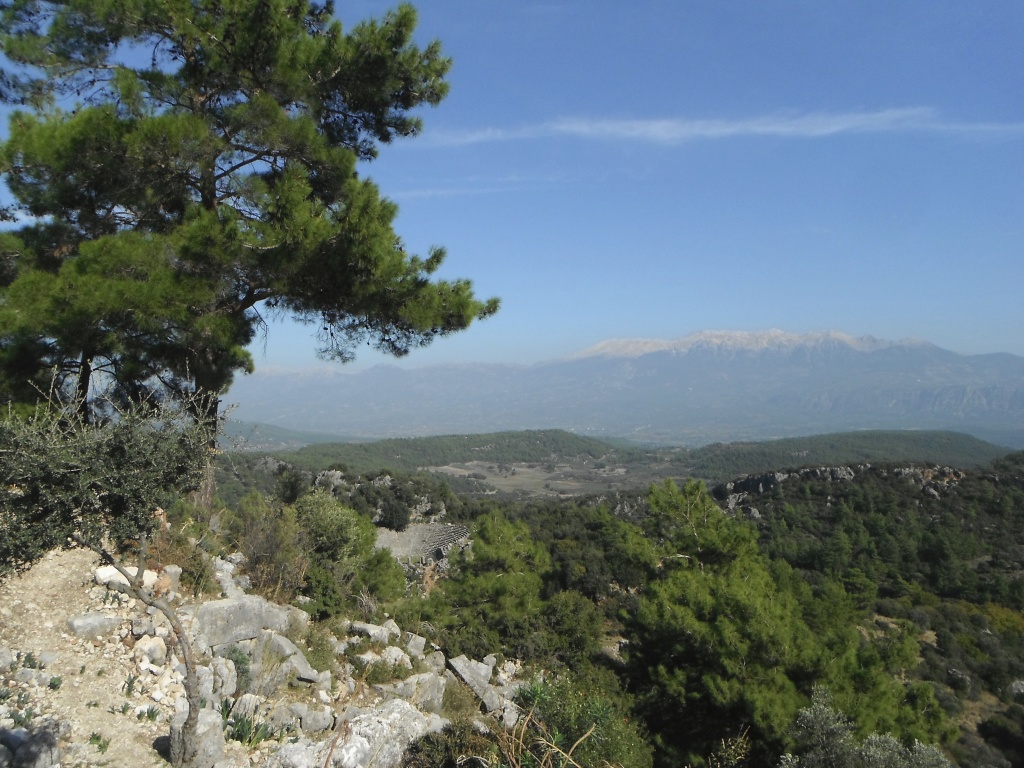 Exploramum and Explorason – the ancient city of Pinara

We climb up and up, and then we discover these tombs.  Some seem to have had fires lit in them. Some were destroyed by grave thieves so we believe. 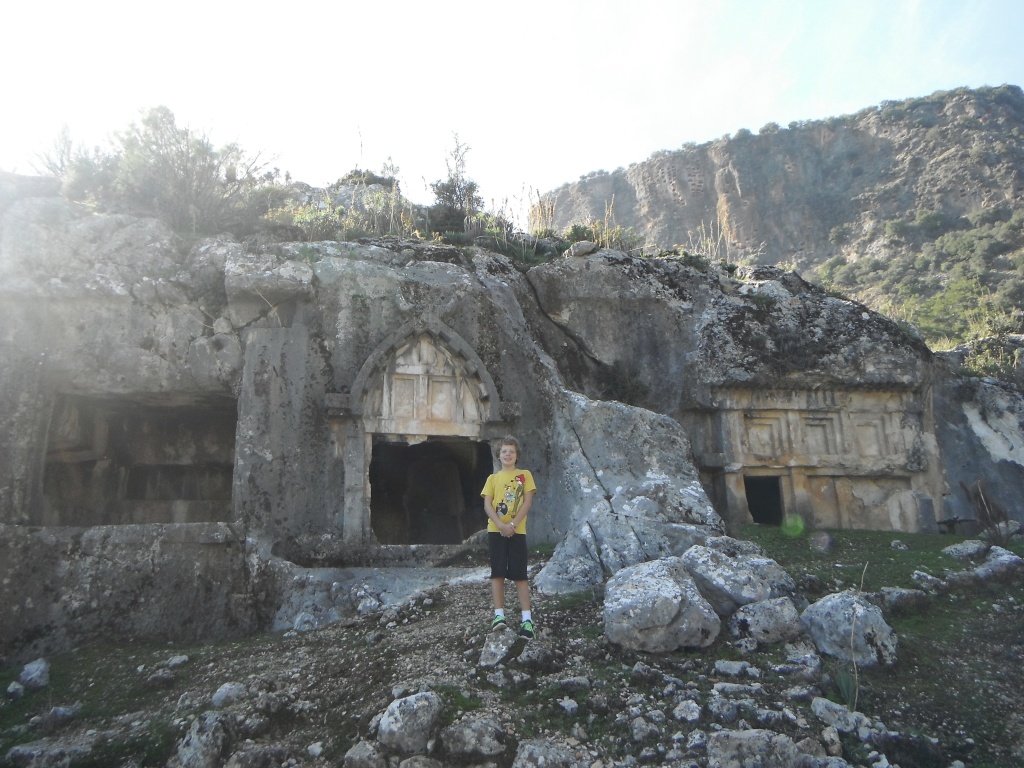 Off to the left I believe is where there is a royal tomb.  This is where I wanted to go. Oh well, we can’t see it all, as we now glibly say so often. 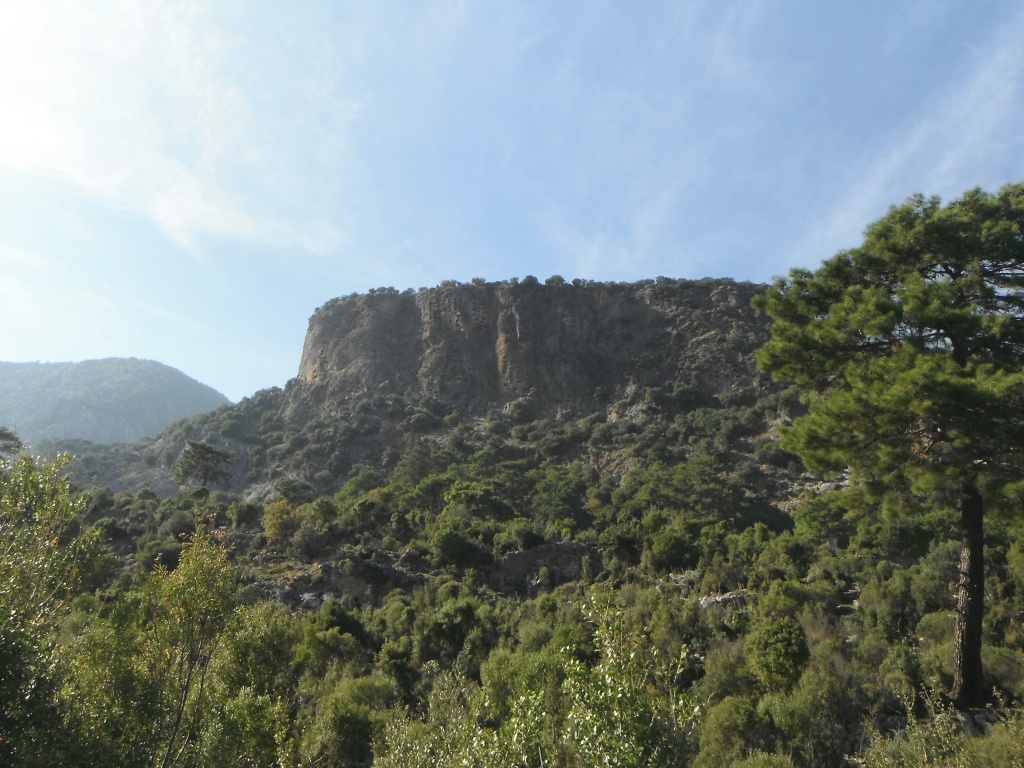 This area is a bit creepy, especially as there is not a soul around.  I want to keep heading up the hills. This area is in the shadows and there are caves, and we suddenly feel way too alone. 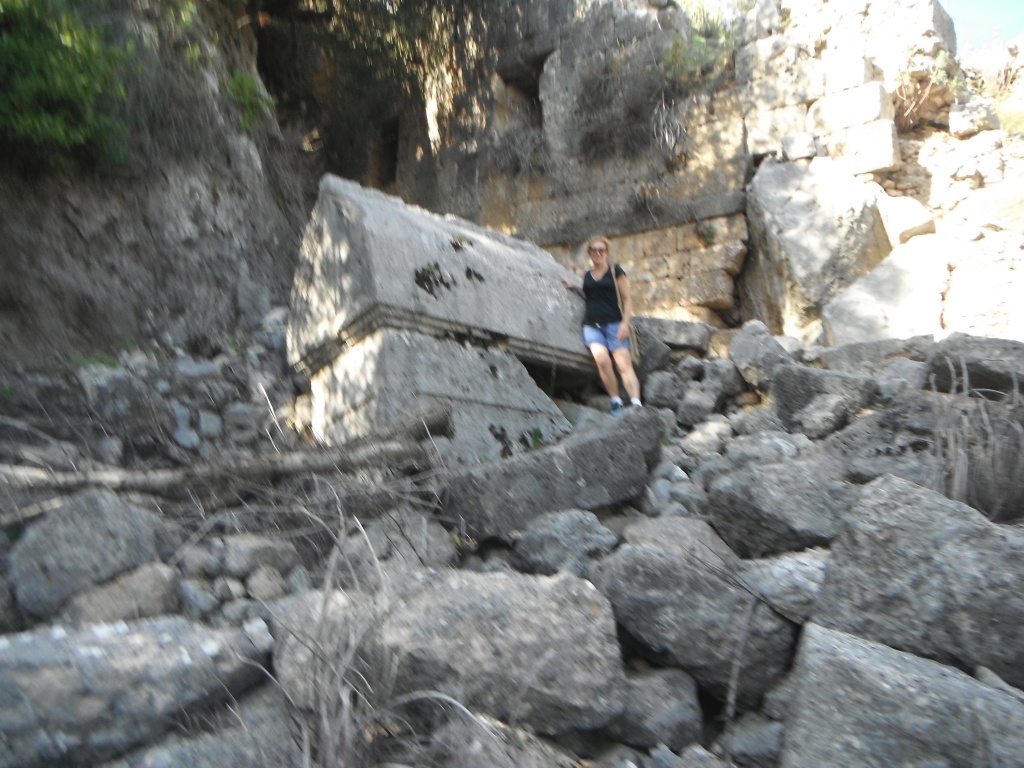 Exploramum and Explorason – a tomb and a cave in Pinara

But thankfully this little guy comes along, and Explorason is pretty happy to follow him, and we are quite amazed that tortoises can go fast when they want to. 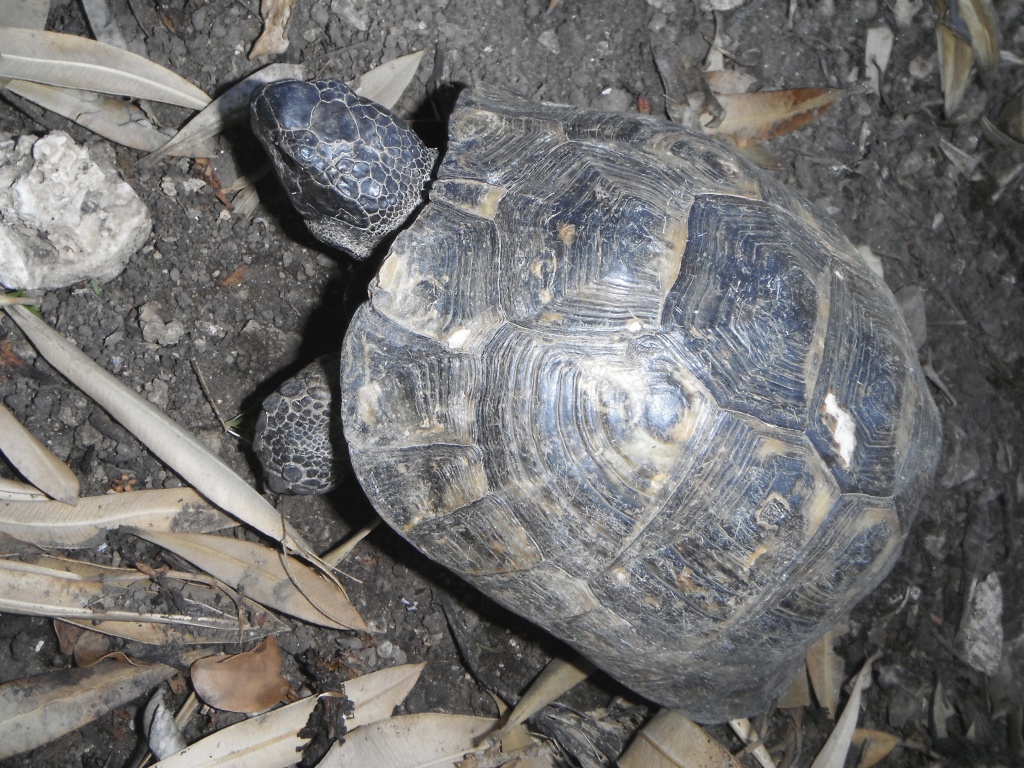 Exploramum and Explorason – following a tortoise

We head on up and climb in and out of many more tombs. 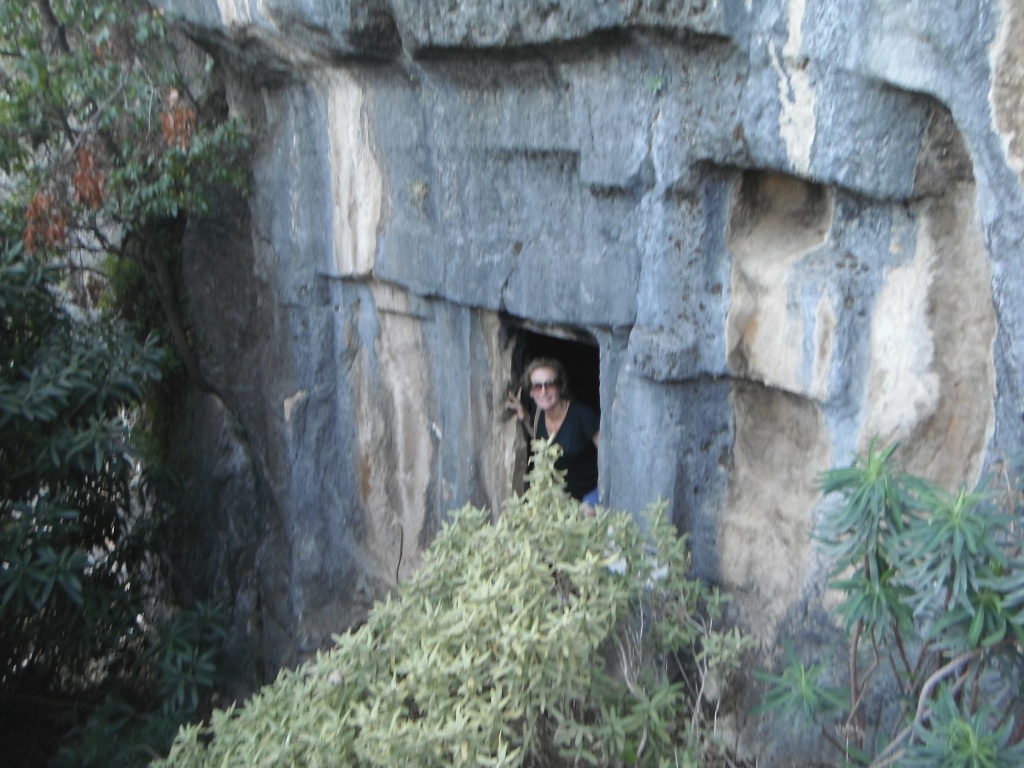 Many, but not all of the once sealed entrance ways have been smashed open. 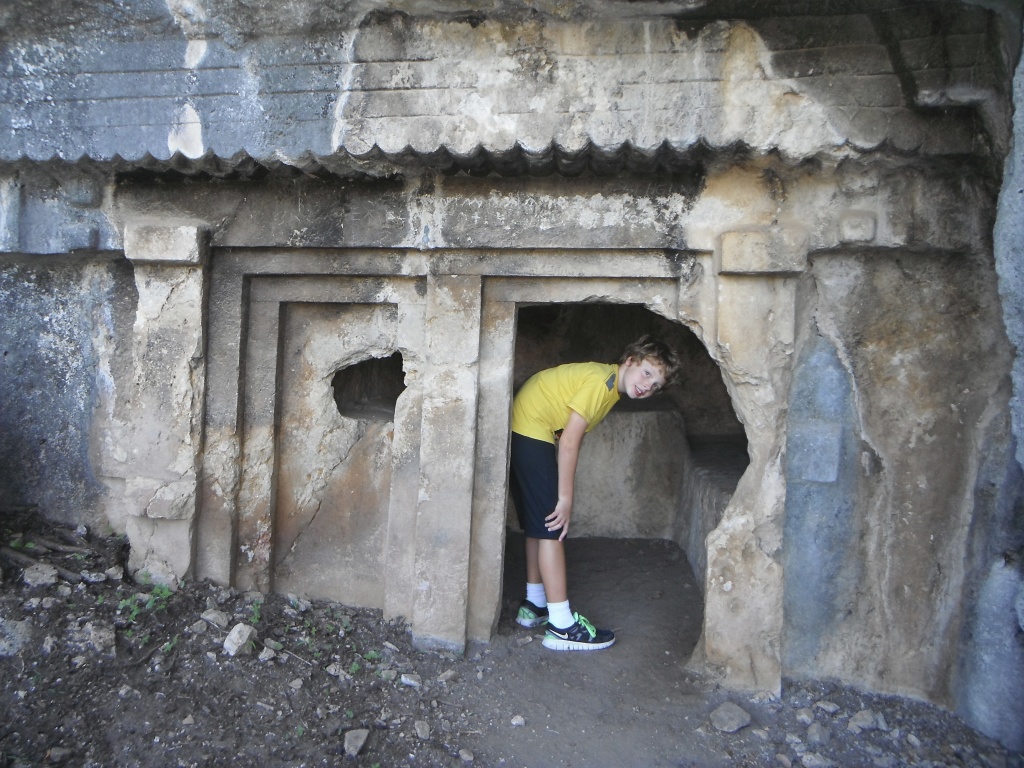 Here is the inside of a tomb.  Most have like a shelf or bed area where the body would have been laid.  There is a small room-like chamber, and we think this is where their possessions of importance might have been left, but we are not sure about that. 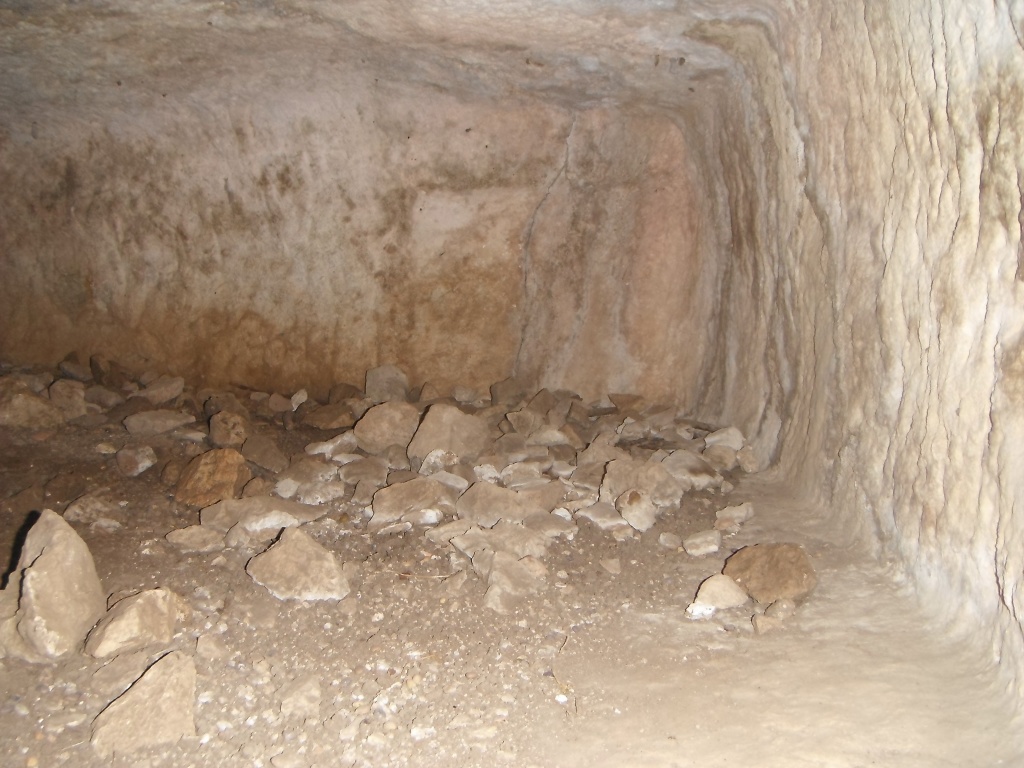 Exploramum and Explorason – inside a plain tomb at Pinara. Some have several shelves.

We discover a great view from the top, and in the distant hills, we see yet more tombs.  They literally dot the hills but the hundreds.

To our right, there is a part of the city and temples we could walk through. We explore a bit but forgot to take photos. I nearly fell into a hidden hole that was about 15 feet or 5 meters deep. 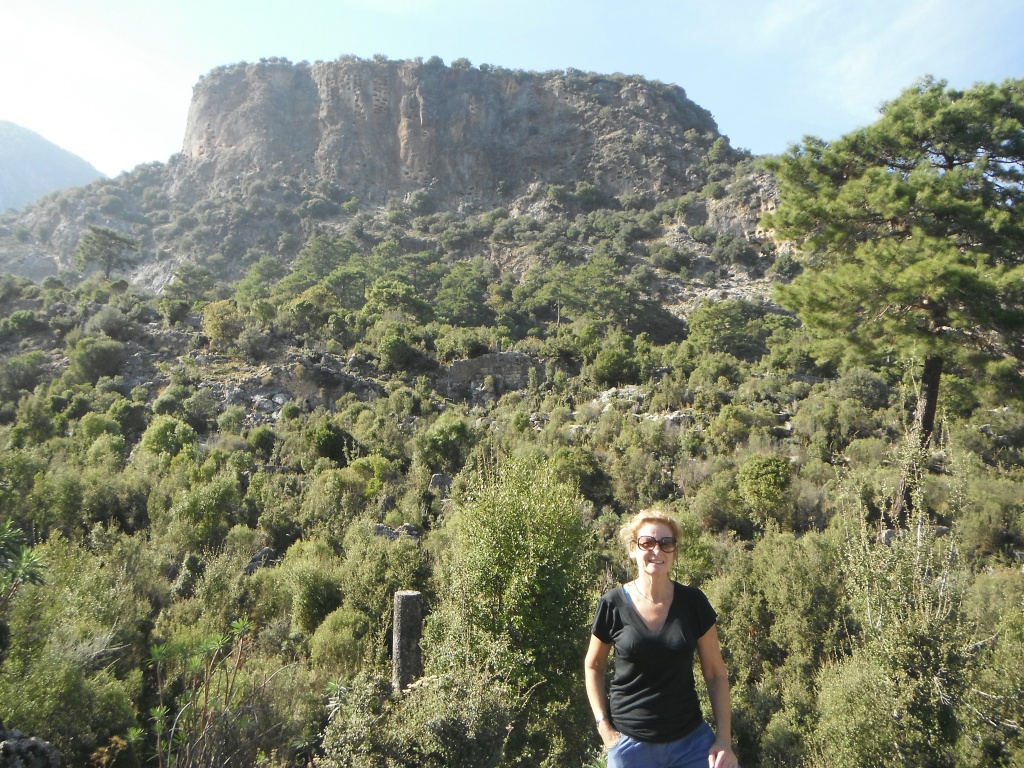 Exploramum and Explorason – the distant tombs of Pinara

Explorason discovers a great photo he wants to load up for Instagram. 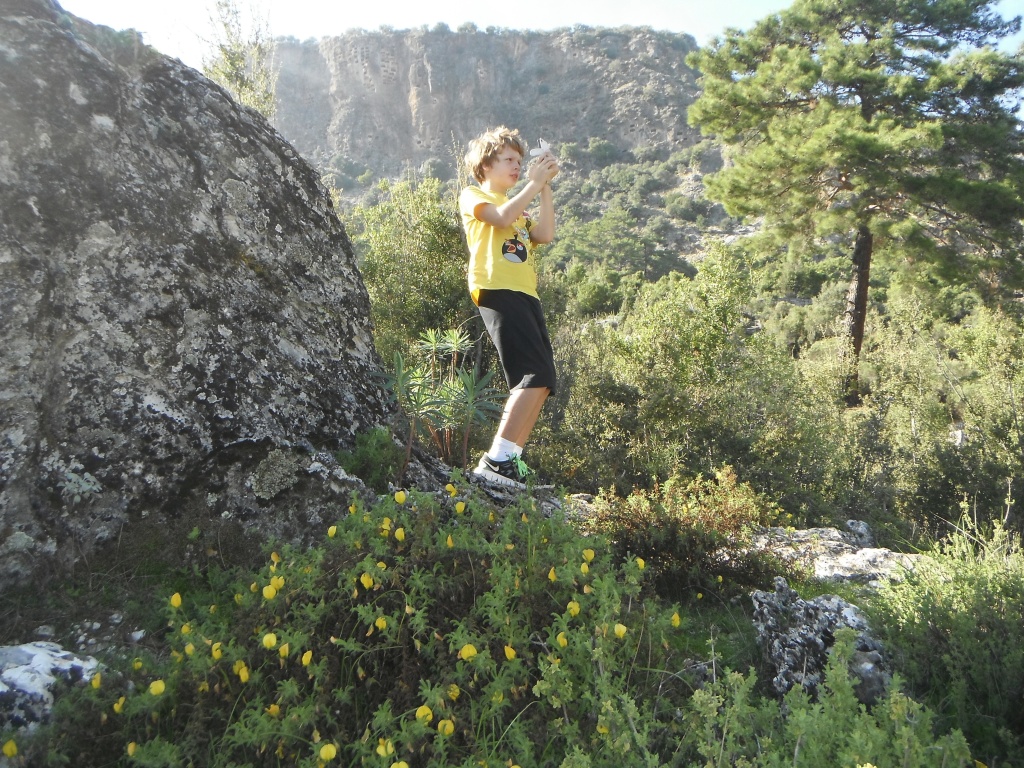 It is his new interest, so any of you that want to follow us this way, then you are actually helping Explorason with his latest project. He has also signed Exploramum up to ‘Vine’ and Youtube too!

He is pretty pleased here, as you can see! 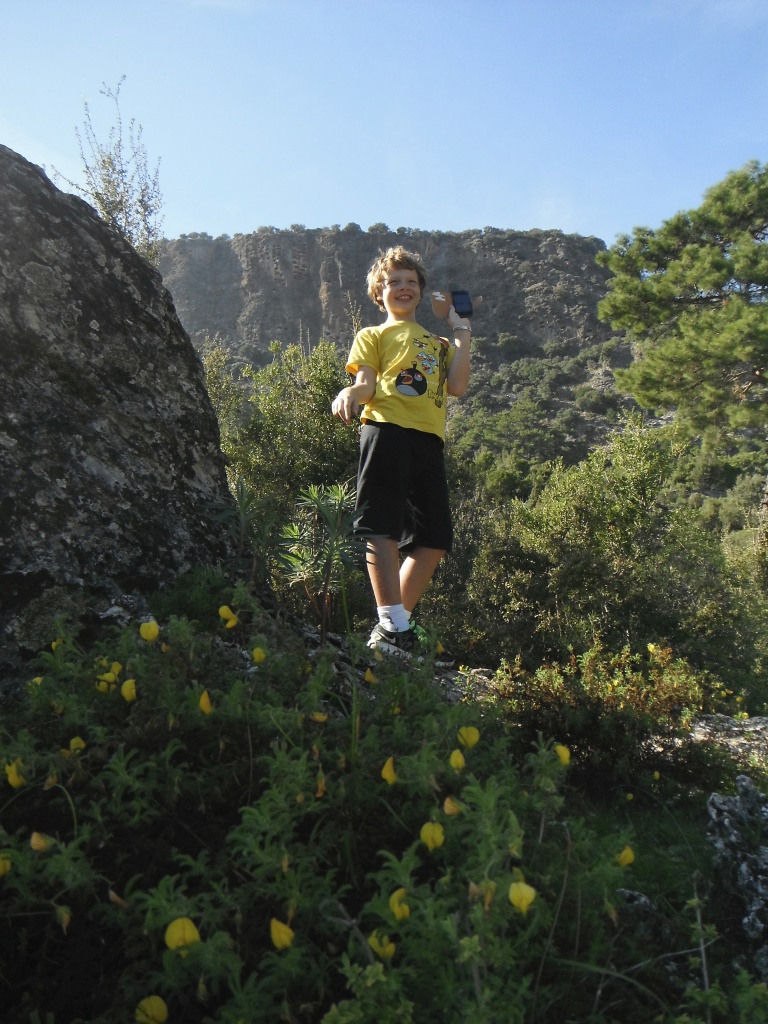 So here is a bit of ‘wiki’ knowledge for you.  Pinara was a large ancient city of Lycia at the foot of Mount Cragus (now Mount Babadağ), and not far from the western bank of the River Xanthos.  The remains of several ancient temples can be seen in Pinara, as well as rock tombs including one “royal tomb”, an upper and a lower acropolis, a theatre, an Odeon, an agora and a church.

The name Pinara has somewhat been assimilated to the name of the present-day village of Minare, half an hour below the ruins, and is near Fethiye n the district of Muğla Province, Turkey. 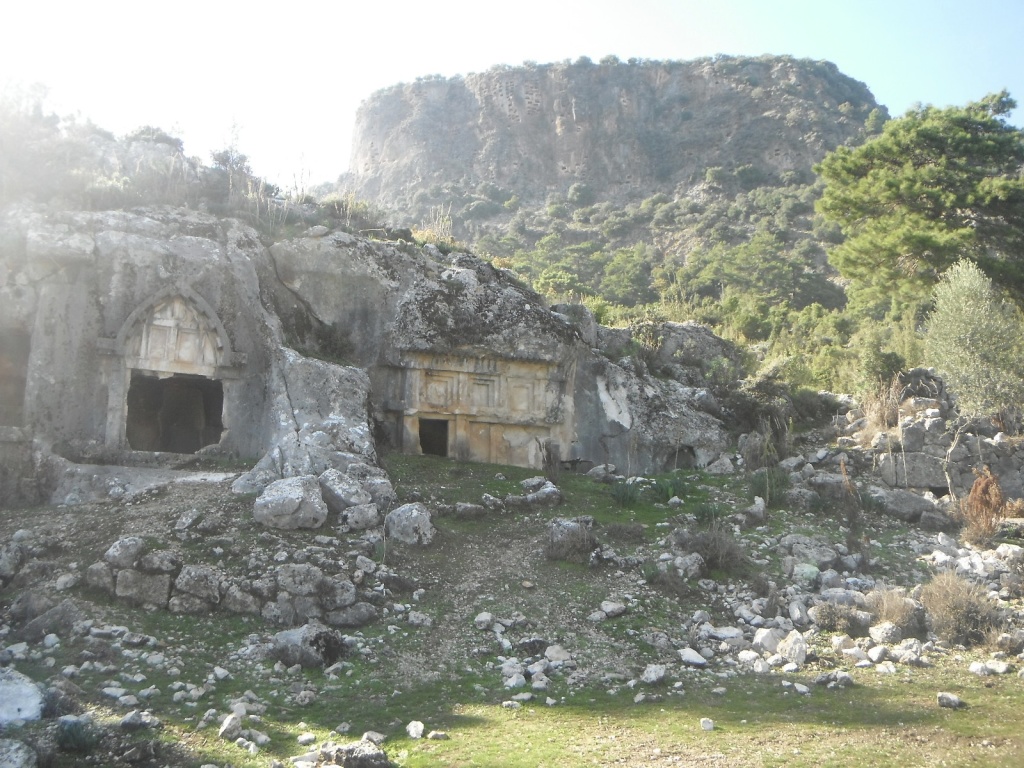 Exploramum and Explorason – sunny tombs on the hillside at Pinara

As we head back I slip and fall as underfoot the rocks are small and roll easily.  I hurt myself pretty bad and am amazed I didn’t break my left wrist.  I will be sporting a pretty size bruise on my thigh too.

We sit and stop. I say maybe God tripped me up, so we would stop and just sit for 15 minutes and listen.  So that is what we do as I recover. We are out of drinking water too, so we need to bring more next time.

I am glad we stopped. To sit and think about life, and our travels.  Explorason said we should have stopped longer, and it was just ‘the best’ to sit there together.

Sometimes we are so busy ‘doing’, we don’t stop to ‘be together’ and to ‘see’ through our own eyes, and not the back of a camera.

We spent hours here and see more of the locals on the main road.  I love seeing the way the locals live life here in Turkey. 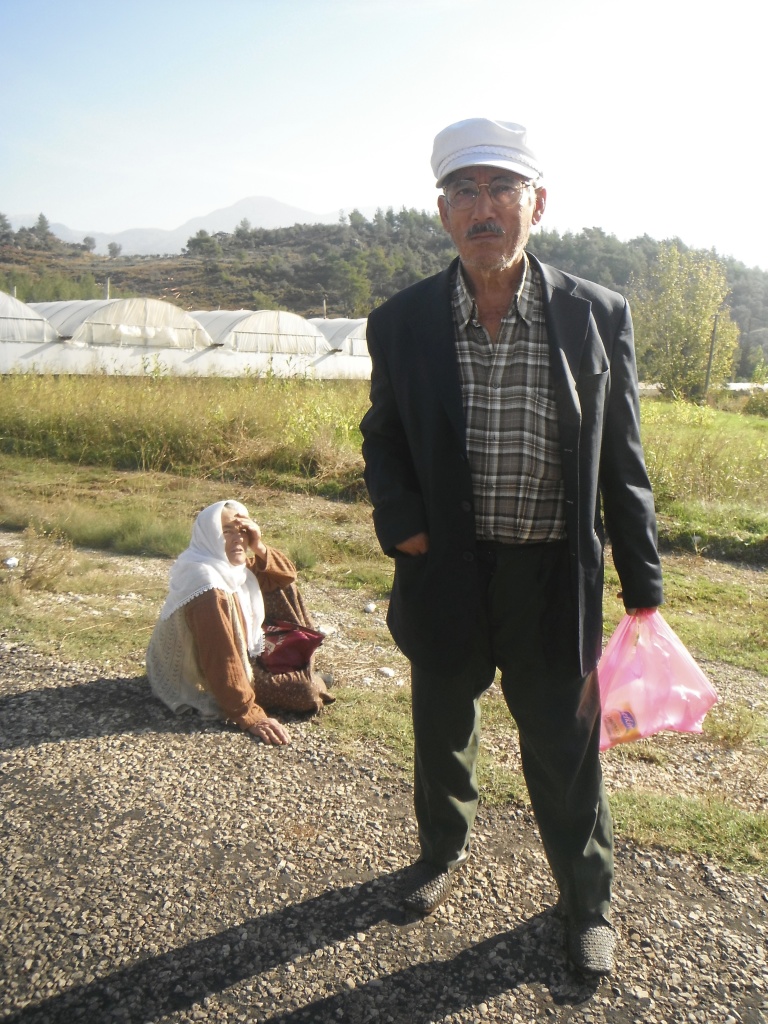 We hope you enjoy our blog, and we try to blog daily, a bit like a diary.

If you enjoy our blog, please would you be so kind as to subscribe and follow our journey as we continue to explore and world-school.

And PLEASE, do share this blog with your friends.

My aim is to inspire and encourage each of you.