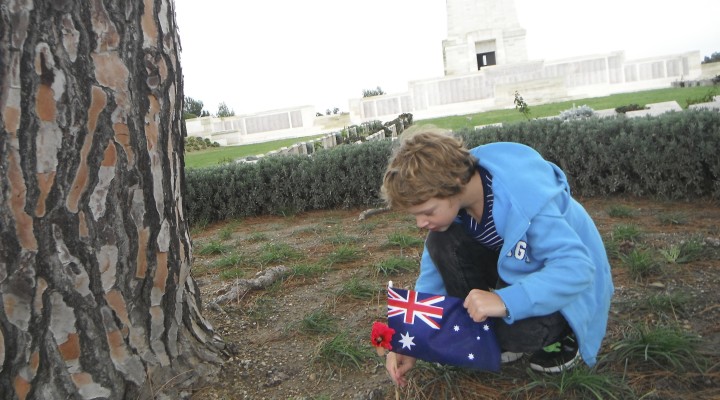 We have left Porto Carras Grand Resort and headed from Greece toward the Turkish border.  It was a cold day, but the sky was blue.

I loathe border crossings.  I hate the intimidation and the questions, and feeling like a criminal, and how no matter how nice I am, they never smile back.  I also knew that right across the other side of Turkey ISIS was brewing at the Syria / Turkey border.  But that is like there being a war in Spain and being worried about it in London, so I have been told.  So that morning I pray with Explorason.  We decide on asking for signs. We listed a couple of signs if we were not meant to go, and if we were meant to go, then we would see a purple field, and the border crossing would go smoothly.

Barely five minutes later, we are driving along a back road, and I yell “purple field, purple field”.  I jump out of the car, and go and pick half a dozen stalks of lavender.  So far it looks like maybe we are meant to go to Turkey!  I have never seen lavender growing in all of Greece, and we didn’t see it after this. But it definitely was a purple field. 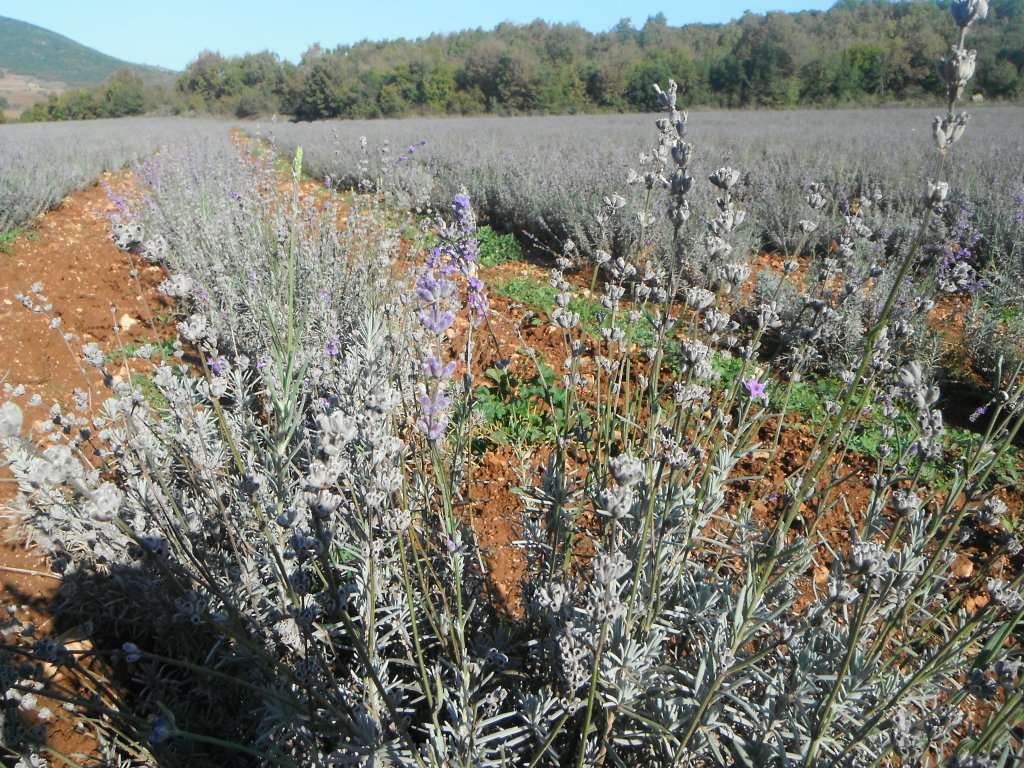 We get to the border and we start with the most miserable officer on the Greek side. My smiles do nothing.

It says “dual border” on the signs, so I wonder if this is the same border for Greece and Turkey combined?

We have had this only once before. But no: we drive over a bridge with armed soldiers. I smile at all of them.

We get to the passport control on the Turkish side. Buses of Albanian tourists line up. It is starting to rain and it is freezing.  The Albanians are so nice, and they keep pushing me to the front of the line for the Passport checks.

“Gee, that was quick,” I say to Explorason.

They seem to be pulling over and searching camper vans, but when we get there they do not even search our car.

We get to the next officer “documents” and we go through the GreenCard and other car registration and my passport.

I then drive on to yet another and final officer, and it is “documents” again. He puts a stamp in my passport, so it is noted I am bringing a vehicle in, and I must take a vehicle out.

All in all, it was a speedy border crossing.

So, folks, God answered our prayer and two signs, and yes we are meant to be in Turkey – or so we feel.

BTW – I kept the lavender!

So it is “Welcome to Turkey” for us.  The sad thing is that this stretch of road is one of the worst main roads I have driven on in Turkey so far  – it didn’t feel welcoming at all.  It felt a bit scary. 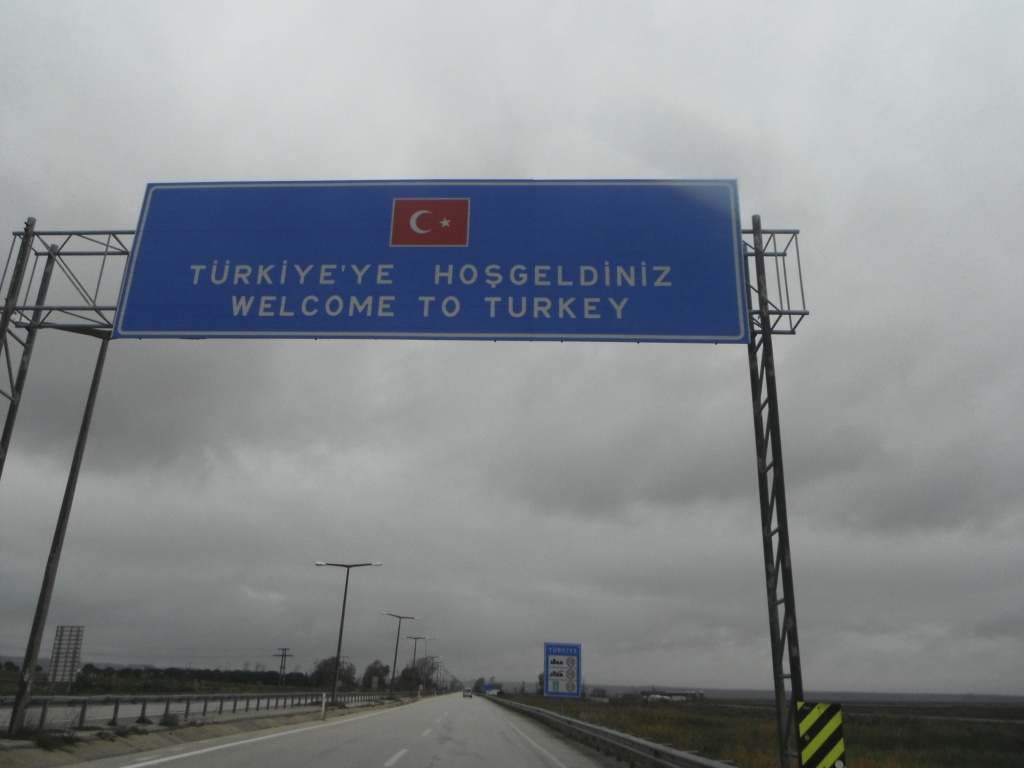 Exploramum and Explorason – Welcome to Turkey

We stop at the first town when Explorason sees “Burger King”  We order and I get a Falafel Burger (very Turkish) and they don’t take EFTPOS, so it is great we have the cash from the lady at the resort.  It is nearly dinner time (5:00 pm), and we have used up our lunch bags already.

We head on to Gelibolu – Bayrakli Baba Turbesi. We get lost, but we show a picture of where we want to go and next thing we have 3 different maps of the area and ‘Things to See’  given to us by the Turkish helpful men.  They point and instruct us to follow a minibus.  How nice.

We arrive and buy a Turkish flag for our collection. It is fabric and all of $3.  This is known as the ‘Flag Father Tomb’, and it is located near the lighthouse, and contains the remains of Karaca Bey. He was an Ottoman standard (flag) bearer. In 1410, he refused to let the enemy capture his flag, so legend has it, he cut it into pieces and swallowed the pieces of the flag. That sounds bad enough, but then when his friends doubted what he said, Karaca Bey sliced open his own stomach to reveal the half-digested pieces of flag inside! The tomb is simply covered with Turkish flags, so-much-so that you can’t see his tomb underneath them all. People come here and pay their respects by buying a flag and draping it over his tomb. 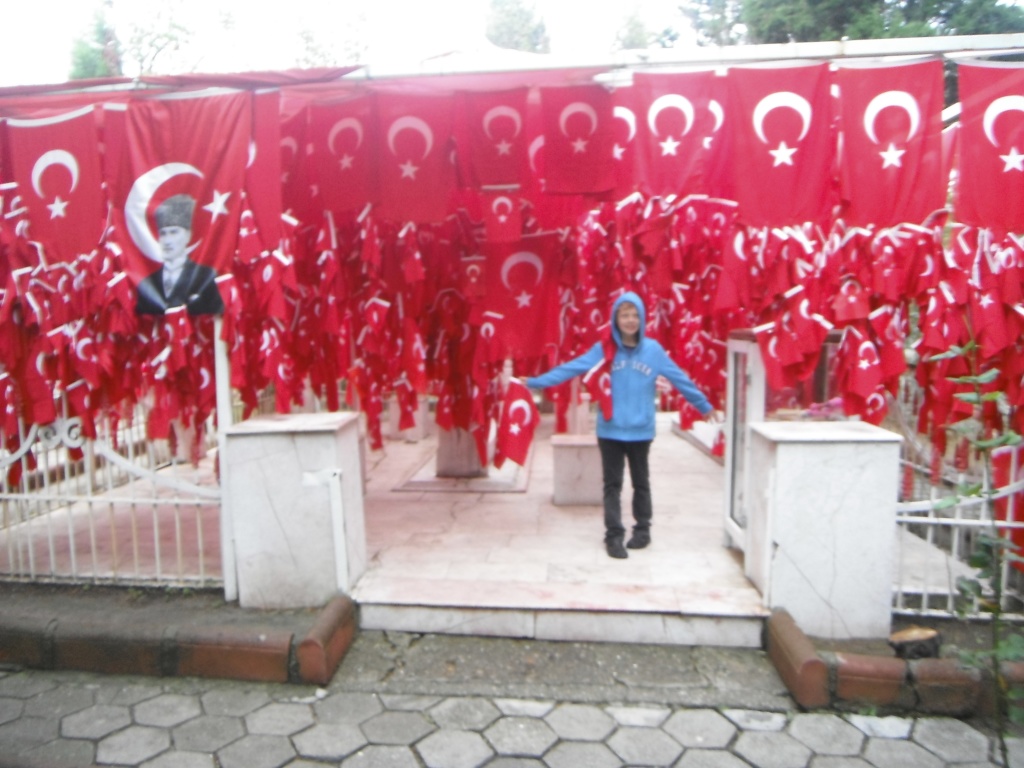 We discover that the town of Gallipoli, or Gelibolu as it is in Turkish, is not the sight of the bloody battle, but that is further on. and really there is not much to see in this town either.

So we drive along the Strait of Dardanelles to the Aegean Sea, to the town of Eceabat, and on the right is the Gallipoli Peninsula.

We stay the night here, and our room charge (we haggle a deal as it is off season) includes a traditional Turkish breakfast. We have a bit of fun making a gift of ourselves with the towels in the hotel room. 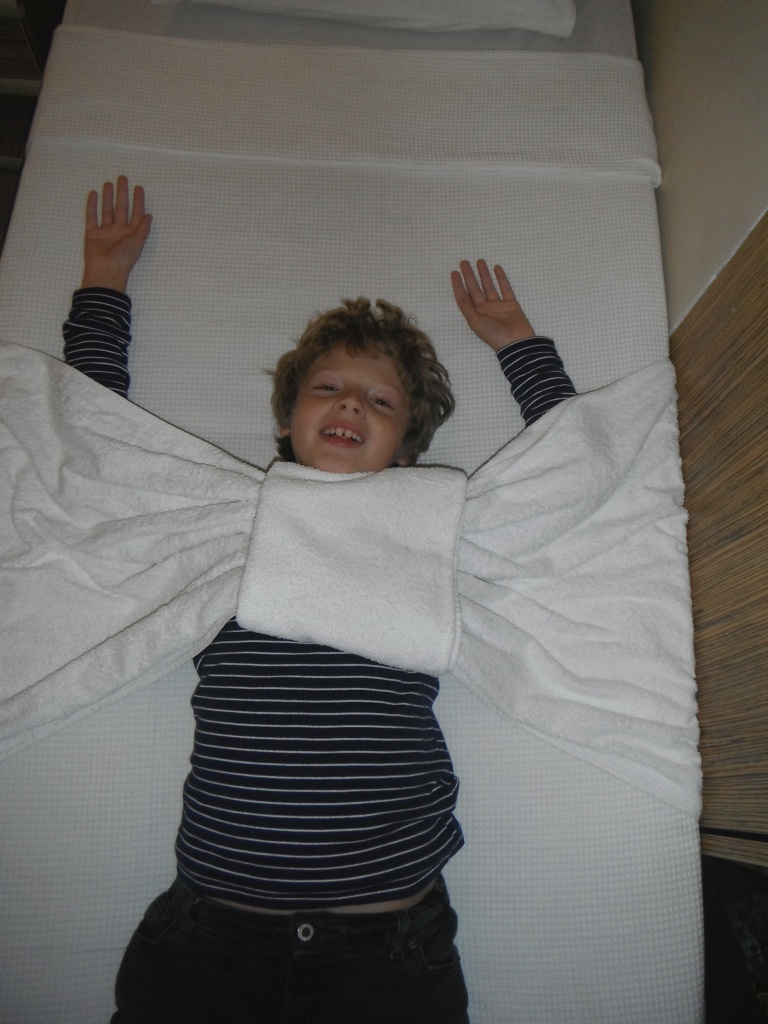 Exploramum and Explorason – fun in the hotel room

Time for dinner. There is no bank ATM we can find, so we are blessed to have the money from the lady at the resort. We find a little Turkish Kitchen.  We are surprised by the difference in the price of food, comparing it to Greece.  Also that few speak English.

Our room overlooks the ferry departure area and also the Gallipoli remembrance site. We pack the car and walk over to the area. It has a well laid out scale model map, so we can see all the places we want to visit.

It will be 100 years next year since the World War 1 battle, and so they are gearing up for a mass influx of Australian and New Zealanders.

There are bronzed soldiers in pits.  I read a poem from a mother and already I start to cry. It is so real to be here. And I can’t stop crying. It is really strange how much I am overcome by the sadness of the loss of so many lives that fought in this place.

We are here remembering Great Australians at Gallipoli who fought and many lost their lives. 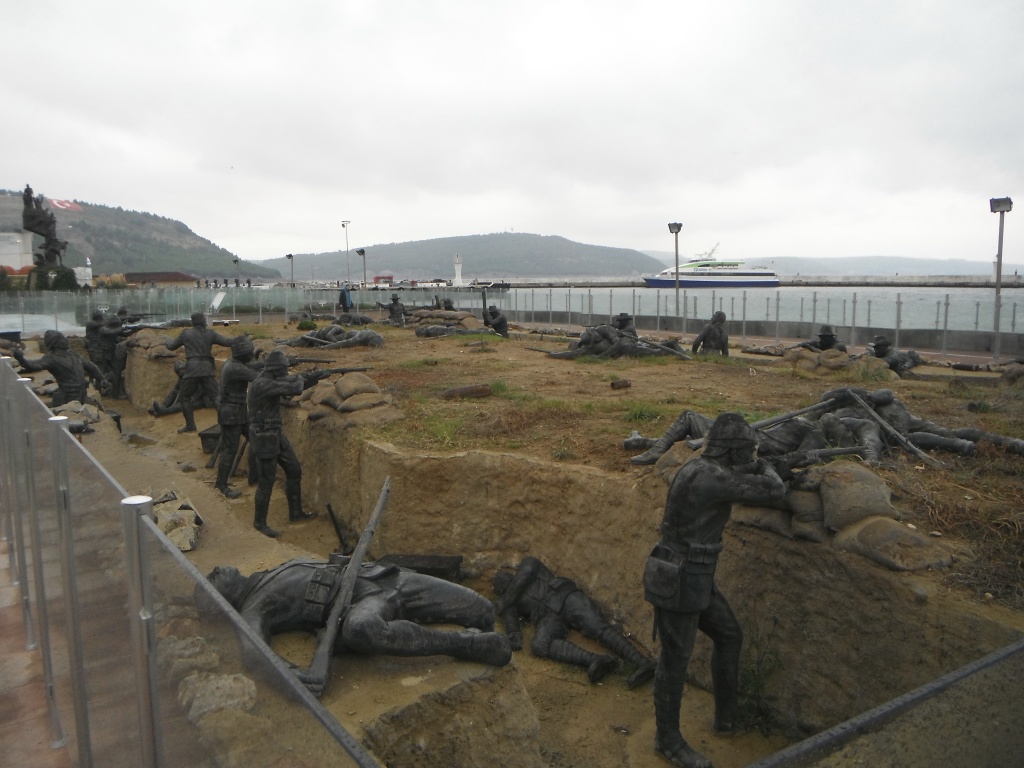 Exploramum and Explorason – the bronzed soldiers in the trenches of Gallipoli

Two of Explorason’s Great Grandparents were Australian Light Horsemen.  And I am surprised as we drive along to come to a big screen showing a reenactment of the battle.

Explorason asks if we can stop.  He asks if it would be alright if we could watch the movie.  This surprised me and made me proud.  Kids want to learn, and this is world-schooling. We enter the Museum built in 2012 and discover three floors of displays. We buy tickets which include the museum and an interactive movie that lasts an hour.

After looking at the displays in the museum we are given headphones, and we stand at the side looking onto the screen. It is like standing on a ship, and it moves.  The movie starts and unfortunately it is so loud that the Turkish drowns out most hope we have of hearing the headsets. I ask 2 X if they can turn it down, but it seems care factor zero.  So we hold our ears and turn our volume up.  The great thing is you move through twelve different cinemas and each is themed like a trench with smoke or various other war-themed chambers. It really is so professional.

At the end we leave – with a headache.  But we have learned a lot about the war too. 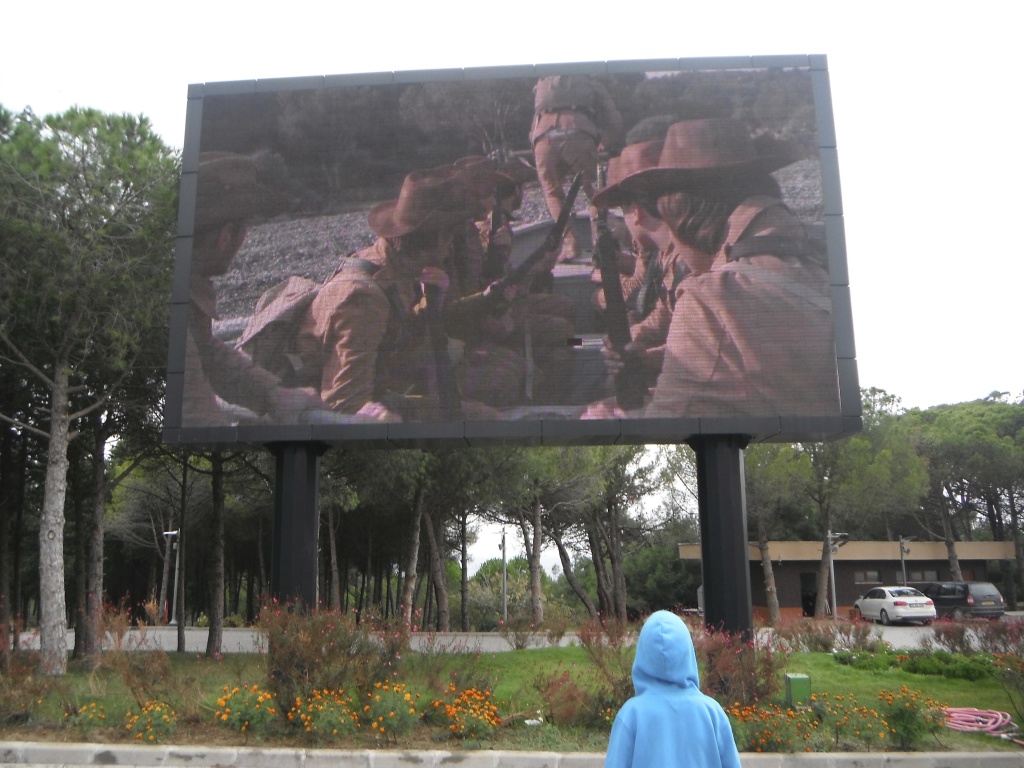 We drive along. This statue represents a Turkish Soldier, helping an Australian. 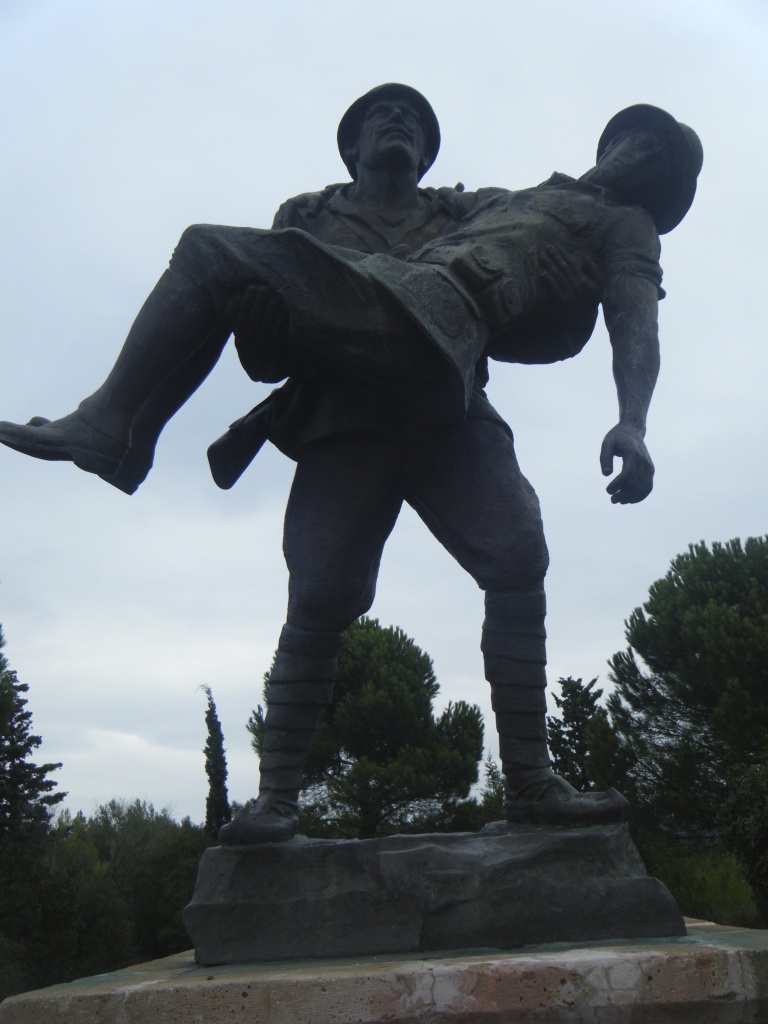 We drive on further – down to Anzac Cove.  Here our soldiers came. In the freezing cold, and in the dark of morning the climbed out of boats and swam in the cold, wet sea. Those poor men. How they must have suffered. 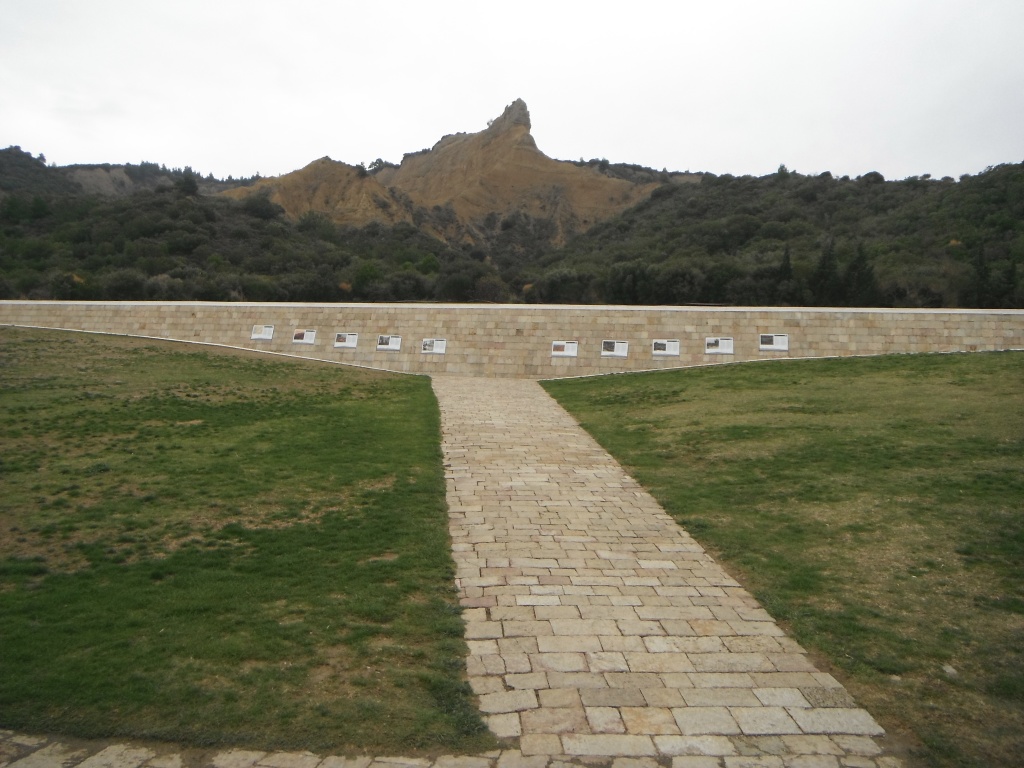 It is so moving. To stand on the beach and to visualize our men coming in. Again I feel I want to cry. 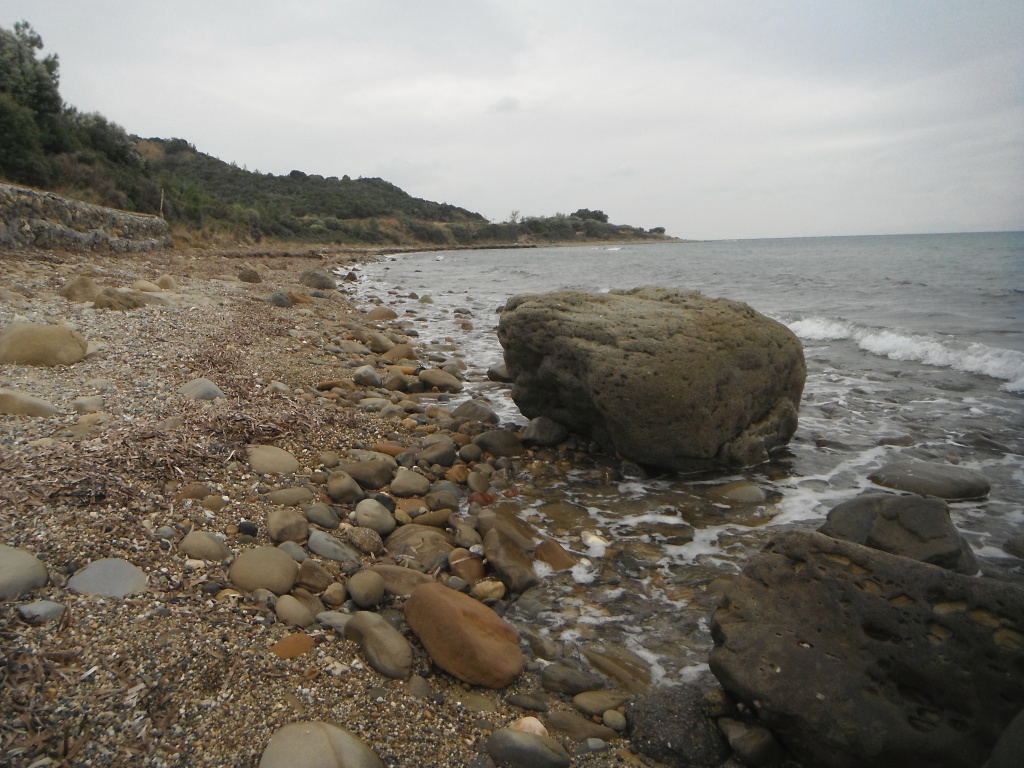 Exploramum and Explorason – ANZAC Beach – it all began here

We head on to Johnston’s Jolly Memorial. 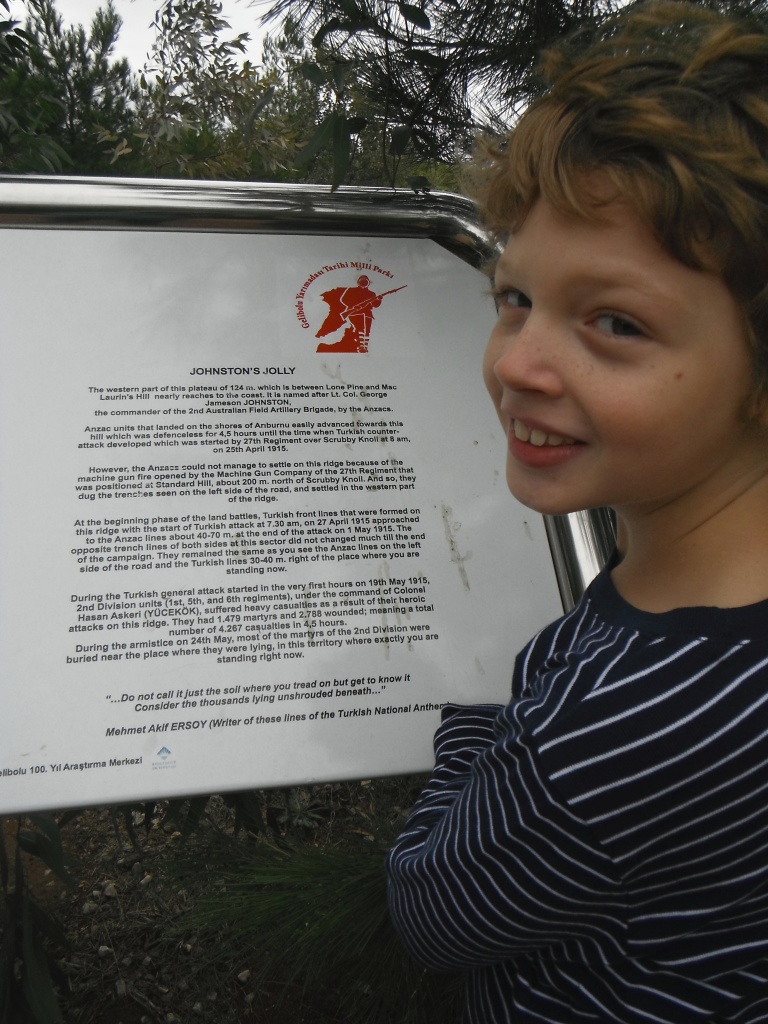 Opposite that are the trenches.  Explorason runs and has his own mini battle, and he feels what it would be like for a soldier to be hours in the damp and cold.  It is a very real way of learning about war, and our history. 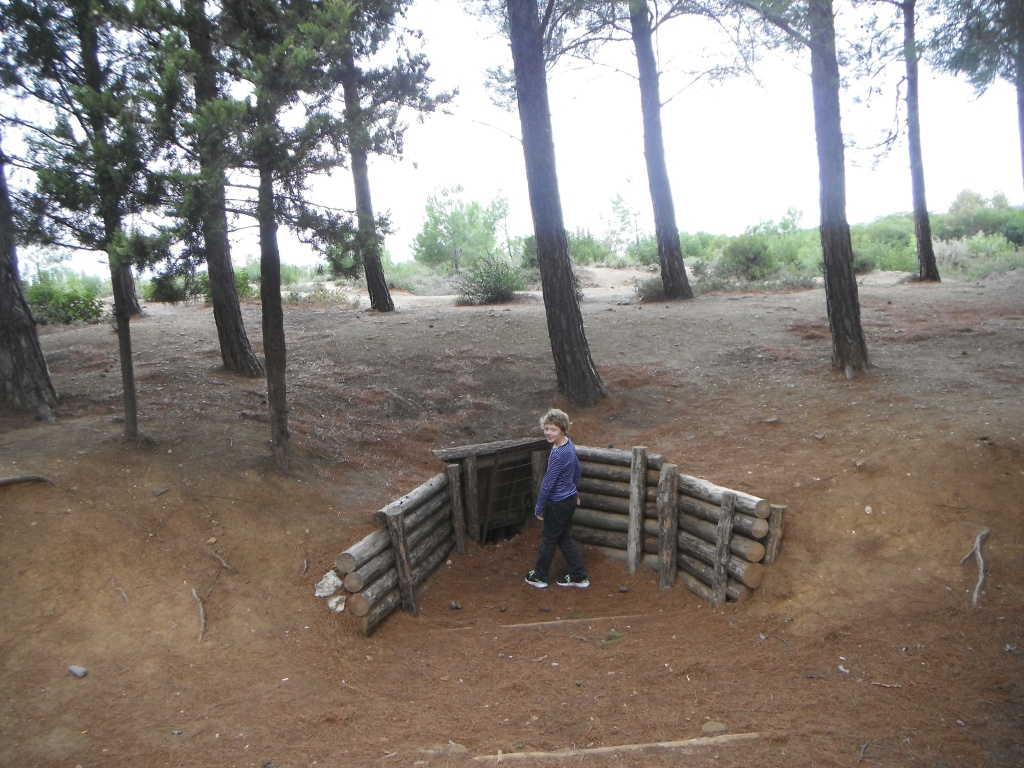 Exploramum and Explorason – entering the trenches

Many of the trenches are now shallow after 100 years of pine needles falling and filling them, but you get the feel of the wind and a little of how the soldiers would have suffered. 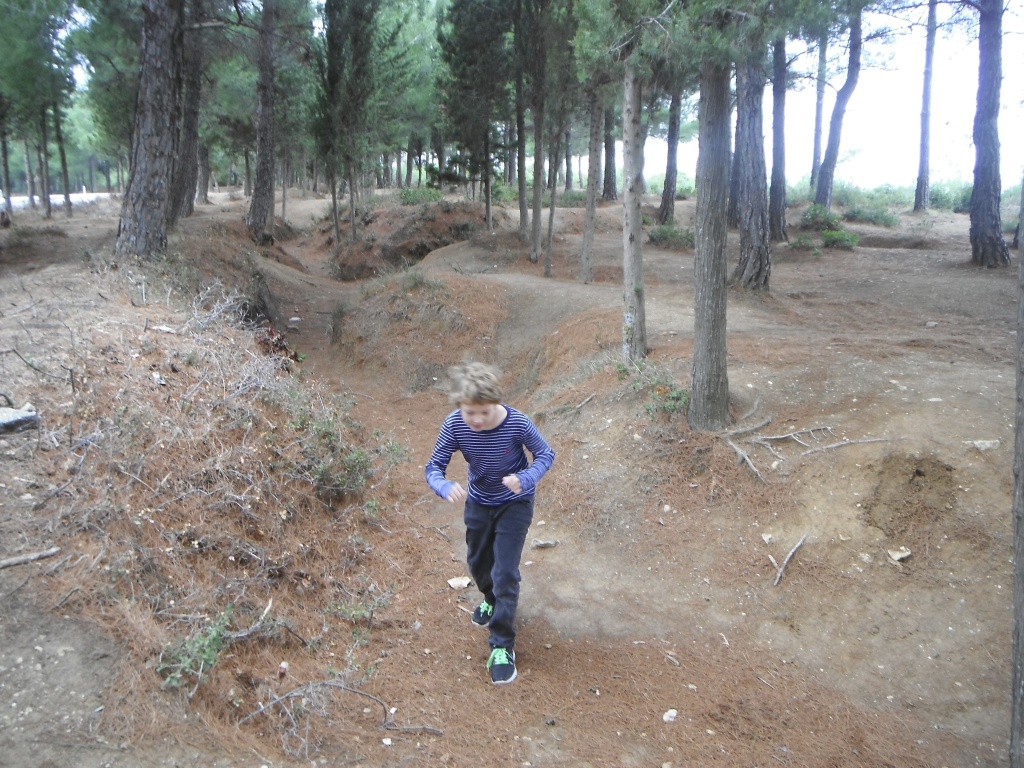 We have an Australian Flag and a red poppy. It is now time to remember the fallen. Those who fought and lost their lives.  Those who followed command, and as the first bank of men that acted as a shield fell shot to the ground, the next row of men would fall into place and many to their death.

Now was the time at the Lone Pine Memorial when I stood and cried.  As I watched my boy, I felt the pain a mother would feel if she lost her son in battle.  How sad.  And now, here we are learning about these great forefathers that came before us. 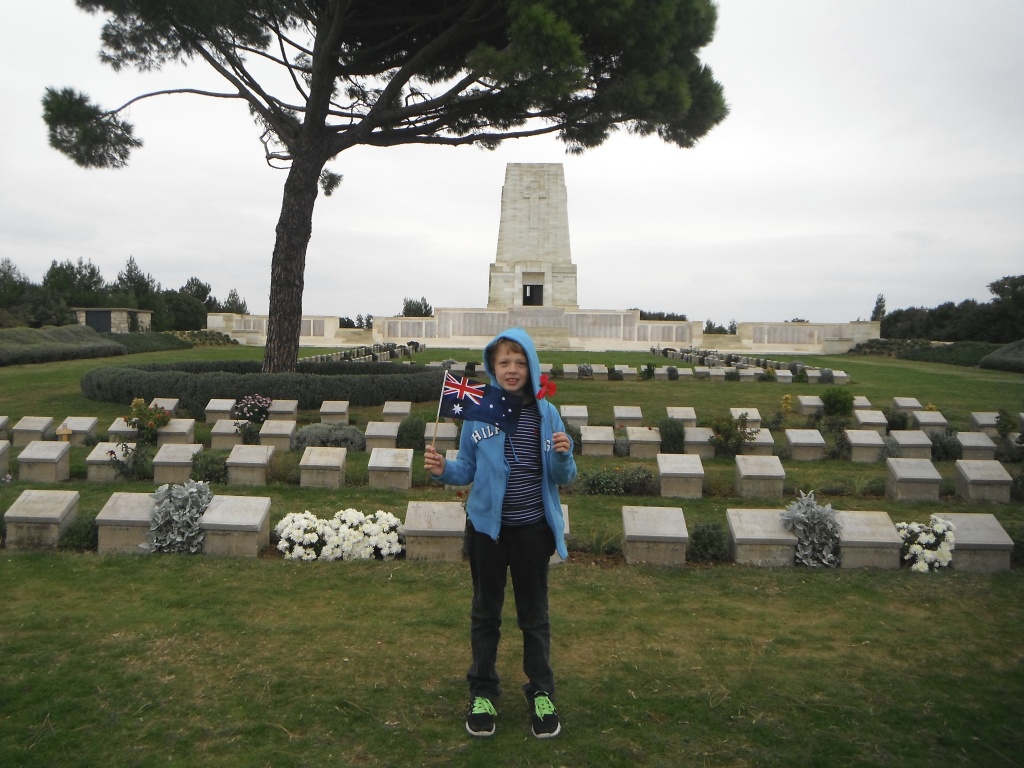 We ‘planted’ the flag and the poppy and had a little ceremony of thanks under the Lone Pine. I was moved by Explorason’s words of thanks to these soldiers for representing Australia and for all the ANZAC’s. 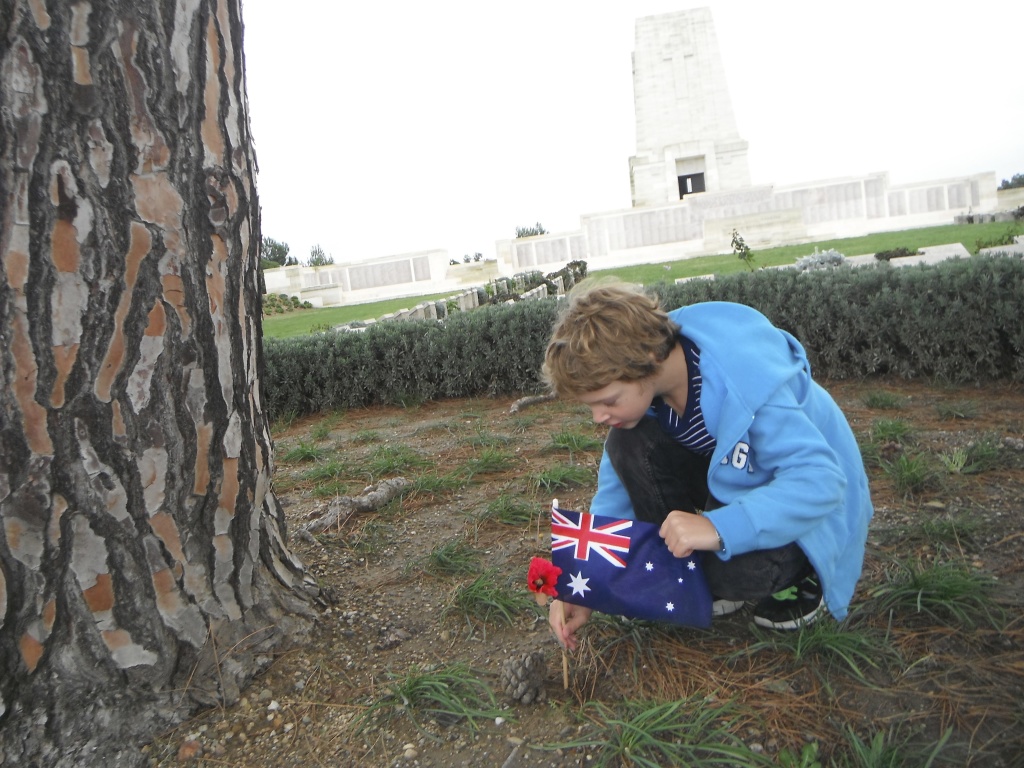 Exploramum and Explorason – Lone Pine – we say THANK YOU ANZACs

So to all of you who lost loved ones in the past in war; this or another war.

We say thank you and we appreciate what they did.

And we thank the ANZACs in aiding Australia to be the land that it now is.

We are proud, very proud to be Australian, and proud of our ANZAC soldiers – what great, great men.

Thank you from Exploramum and Explorason.

Our tears fell where they fell – Gallipoli.

6 thoughts on “Our tears fell where they fell – Gallipoli”