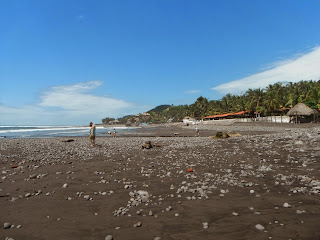 We arrived two nights ago at El Tunco.
We were so fortunate to get a lift from a family with a pick-up truck, and we had been pretty disappointed with where we ended up at our posada.
I have no idea how some websites make places look so good.
Or maybe the photos are years old before the mold started growing, and the white-ants moved in!
The owner originally wanted $35 a night which I just can’t believe, and we haggled down to $20.
But I found out later there were rooms on the beach from $10, and we were off the beach but on the river, not far.
Still, we made the best with what we had.
There was no-one else booked into the Posada Luna, and the cleaner sat around all day watching soapies, so we pretty well had the place to ourselves.
Well apart from hundreds of ants – and 3 varieties, and some lovely birds in the trees.
At 4 a.m. after not much sleep the roosters started.
So we decided to have an early start and have my son tackle his writing.
He is never too thrilled about this mind you, but some things need parent motivation, and this is one.
It took most of the morning.
We then enjoyed the afternoon around the not so clean pool.
Not one item of pool furniture did not have some kind of break. 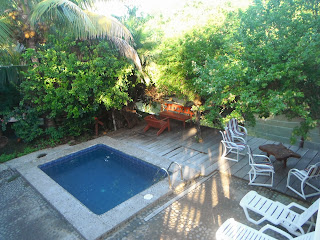 I know – you will ask why didn’t we move?
Well, the answer was because we were now the nearest hotel out of town to the bus.
To move would mean that in a day we would have to drag our stuff even further.
I am tired.  I have not slept a whole night in weeks due to the heat. And frankly, El Tunco is not what I expected.
It is a rocky, black sandy surf beach.  It has no class.  It has one nice hotel on the beach (which we only discovered on our last day), but the town is dead in the rainy season.  So I felt flat.
Still, in my quest to maintain my title as “Exploramum”, we headed to the beach. 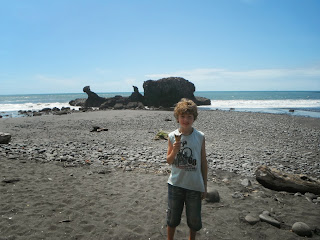 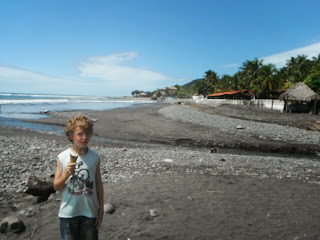 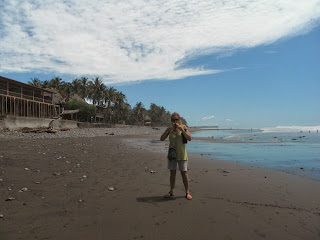 We enjoyed ice-creams which were choc dipped and had nuts and a generous scoop of ice-cream for less than $1.

The next day was a bit of a repeat of the day before.
More writing of his journal and some spelling which took hours.
One downfall of travel is that the hotel room becomes the classroom and there is just too many things to distract an 8-year-old.
Now some will ask me why as an ‘un-schooler’ or ‘world-schooler’ am I motivating my son to write.
I believe in encouraging him in all areas of exploring, but writing and mathematics are the 2 areas that world-schooling can fall behind on.
So we use his journal and budgeting for these, as well as a few other things.

We aimed to go down the road a few kilometers to la Libertad and wished we had.  This is a far classier area, and before the turn-off to the Pacific main road (the road from San Salvador) is dotted with classy American style Malls and eateries.  But we were both so tired, we just couldn’t get motivated – shame.  That was especially true for my son, which surprised me, as he loves shopping malls.

After our afternoon swim, we raced out to see why we were hearing a ‘clown horn’ – we have been hearing it all day (and yesterday).
It was a cheerful local riding around all day selling sweetbreads.
He was joined by an old toothless grinning lady selling tortillas. 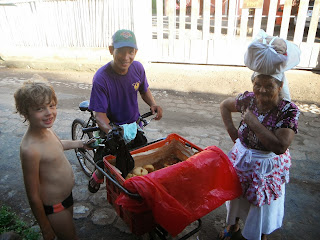 She grabbed Explorason “chico” and thought he was “bonito” or cute. 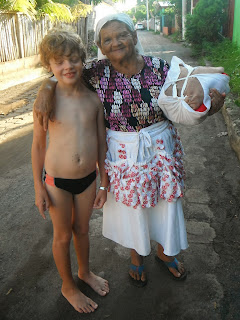 That night we headed out for Pupusas.
For $1 this lady freshly made to order each Pupusa. 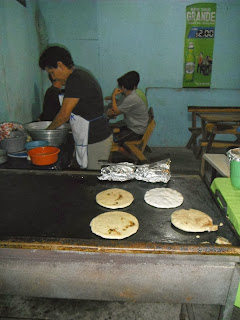 This photo shows one with only a smidgen of topping.
You really add salad and a tomato salsa sauce all over the top, but I wasn’t so sure, so I just added a tiny bit to try at first. But as soon as I discovered how yummy they were, my pupusa was loaded with the toppings. 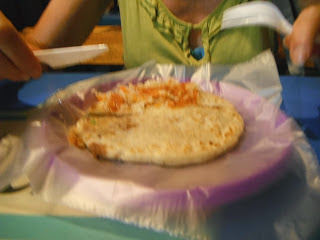 On our last night, we were out on our river balcony and saw the sun setting.
My son decided it was time for a run.
We raced hand in hand down the dirt road.
We captured the sunset perfectly.
El Tunco sure has glorious sunsets. 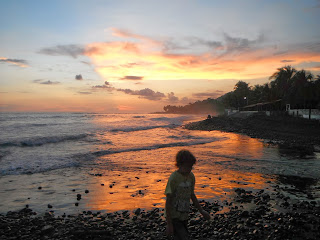 Check out these amazing El Tunco,