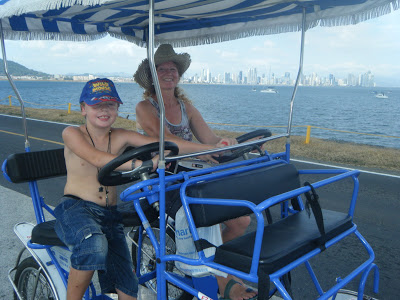 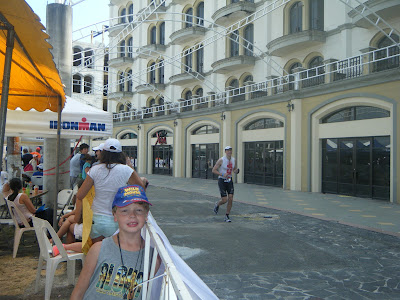 We jump into a Panama City taxi and ask to go to The Causeway because we want to check out the cycling Islas de la Calzada de Amador using a tandem.

At first the taxi driver says he has no idea where it is, but eventually, he understands it is Amador Corridor. As we get partway the roads are closed. So he explains that we can’t get through.

We sit in traffic for a while, but then the police move the barricades and we drive on. The Panama Ironman is on today. The driver decides to drop us at the start of the Causeway or demand more money, so we jump off and walk around.

The Ironman is in the final 1/3 of its race. We enter into the area and watch them come through the finish line and cheer them on. There are a lot of Americans in the race we notice. We get free bottled water and a bottle of sunscreen in the handouts – both prove to come in handy today. 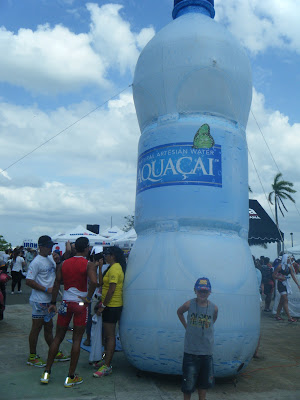 ©Exploramum and Explorason – complimentary water is given to the spectators

We have heard that you can hire bikes and tandems to go cycling Islas de la Calzada de Amador. We try to hire a moped but are told we can’t as my son is too big for the back seat part. So we settle on a tandem bike that is double crossways, not long ways like we rode recently in New York. 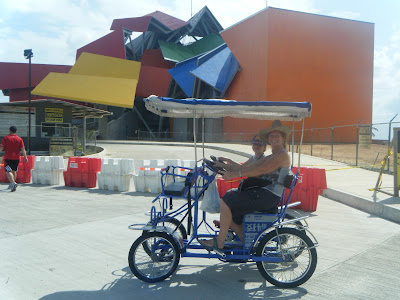 ©Exploramum and Explorason – we start cycling on our tandem bike

Off we cycle across along The Causeway toward the first Island.

About halfway across the first Causeway, the wind picks up. We are building up quite a sweat and so my son decides to strip off his top. This “cycling Islas Calzada de Amador” is man’s work he says. 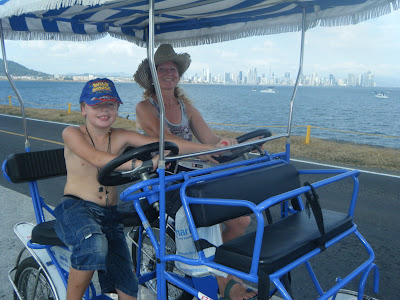 We are in The Ironman Cycling

A classic moment is when we are stuck with all the bikers cycling away as fast as our legs would carry us. Normally the bikes go on the wide walkway, but that is where the Ironman is on, so we have to share the road and that is quite a laugh.

A non-Ironman participant and biker grabs my camera and takes photos of us too – we all have fun. Secretly I am dead scared he will whip off with my camera on his bike! 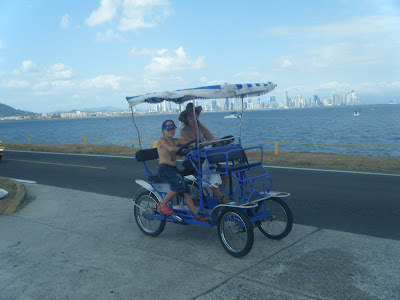 ©Exploramum and Explorason – fun before the wind starts pushing us backward

On and on we go cycling Islas Calzada de Amador. I am now getting worried as we have to get back as the wind is so strong now.

Next, we get stuck amidst the motorcycles and stuck in the traffic jam and we can’t move.  This was not such a flash idea! 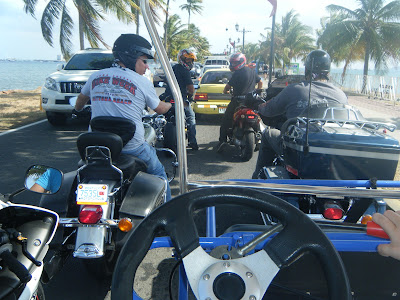 ©Exploramum and Explorason – stuck in traffic on the causeway

After much negotiation, I convince my son we will have to turn around after we reach the first island.  We stop and have a break but really we have gone too far. When we turn around, well we can barely pedal the tandem bicycle as the wind is so strong. My son gets out and pushes.

He actually was quite the gentleman and wanted to push me all the way back.

We run out of water even with the extra free water we were given today. It is mid-afternoon and we haven’t even stopped for lunch. The snack-pack is completely consumed. We have quite a distance until we return to the bike shop and I have had enough. 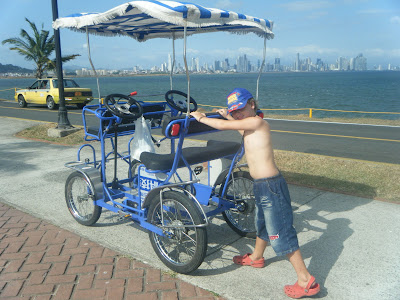 Throwing Water At Us

Along the way, spectators begin throwing water on us. They cheer us on as though we are in the Ironman competition. They even give us Gatorade from the Ironman volunteer stalls.

Then – they even send people out to help push us along as we are cycling Islas Calzada de Amador.

We are back from cycling Islas Calzada de Amador

We finally get there but it is over 3 hours of riding and I feel my 51 years of age as my legs wobble in near collapse. My back is absolutely in pain. My son is about to cry ‘from starvation’ as he tells me, so we are headed for a restaurant.

The restaurant is so busy due to the Ironman event. They have run out of most drinks but we are too tired to move. I can’t even get a soda as they don’t have any left, so I am forced to have the beer with ice! It hardly touches the side. 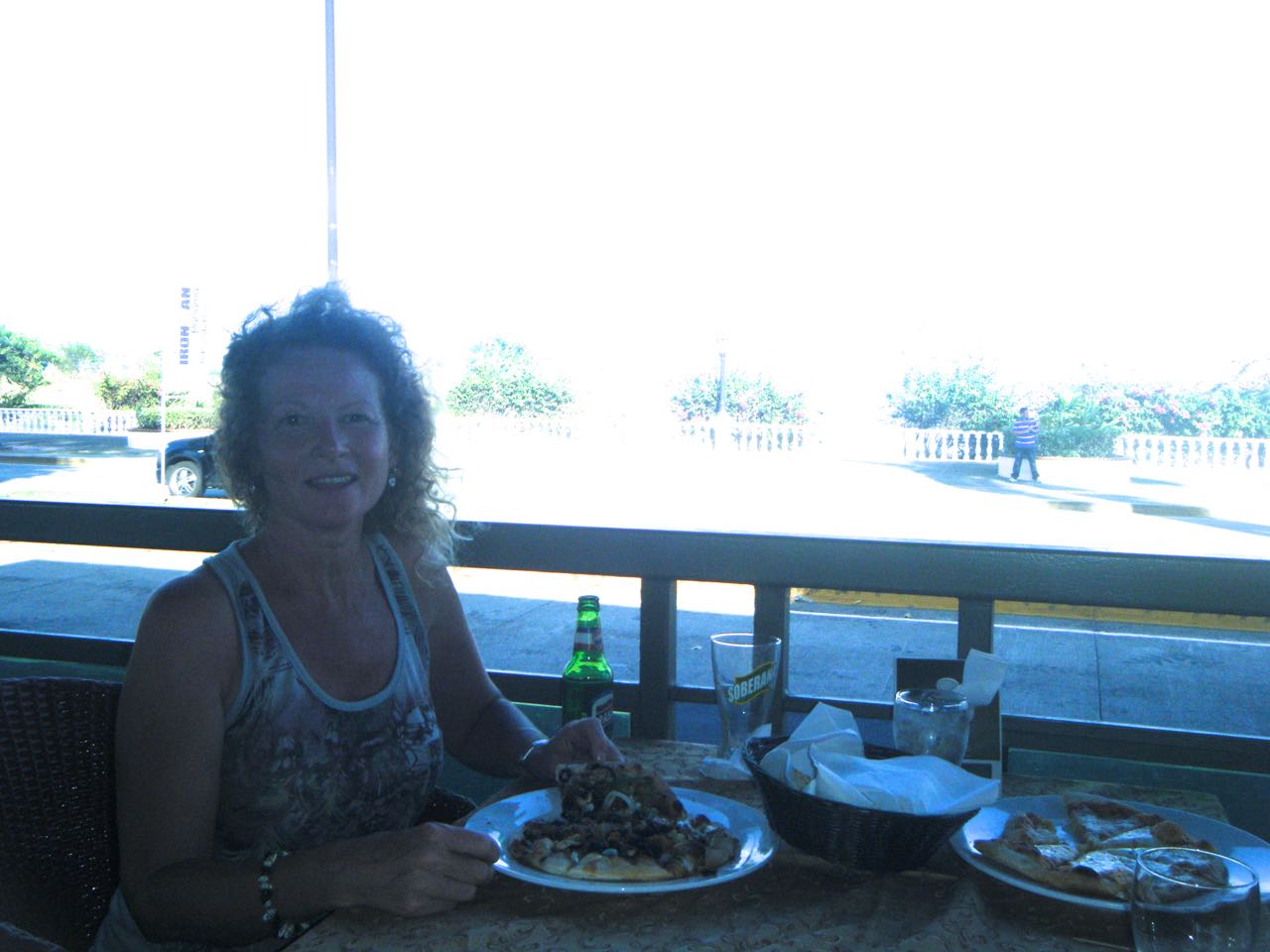 We sit here until nearly dinner time as we enjoy pizza and cool down. My legs are no longer wobbling as they were when we arrived.

I look over and Explorason is nearly asleep while eating his food. We take away the remainder of the food and leave for a taxi as I know I can’t carry my son if he falls asleep.  These are the time single parenting is a challenge!

After 15 minutes of walking up the street with an overtired child, we manage to hail down a little taxi. It has a bike in it and some other passengers inside too, but we squeeze in. We agree on the fare which seems quite moderate. I hate to say it, but I would have paid double just to get back!

The lady in the taxi warns me not to walk the streets at night in the area we are staying: Casco Viejo – this is the new old city. Not the old, old city – Panama Viejo. So confusing!

I have no intention of walking the streets – or walking anywhere. I just want sleep.