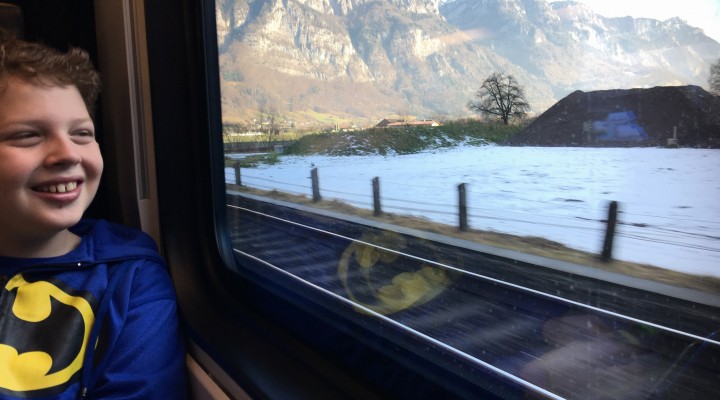 Snow-capped mountains swish by in the distance as I gaze out of the train window.  Here I sit in First Class style, sipping my cappuccino coffee and nibbling on complimentary snacks as our Italian train zooms at nearly 200 k.m.p.h. 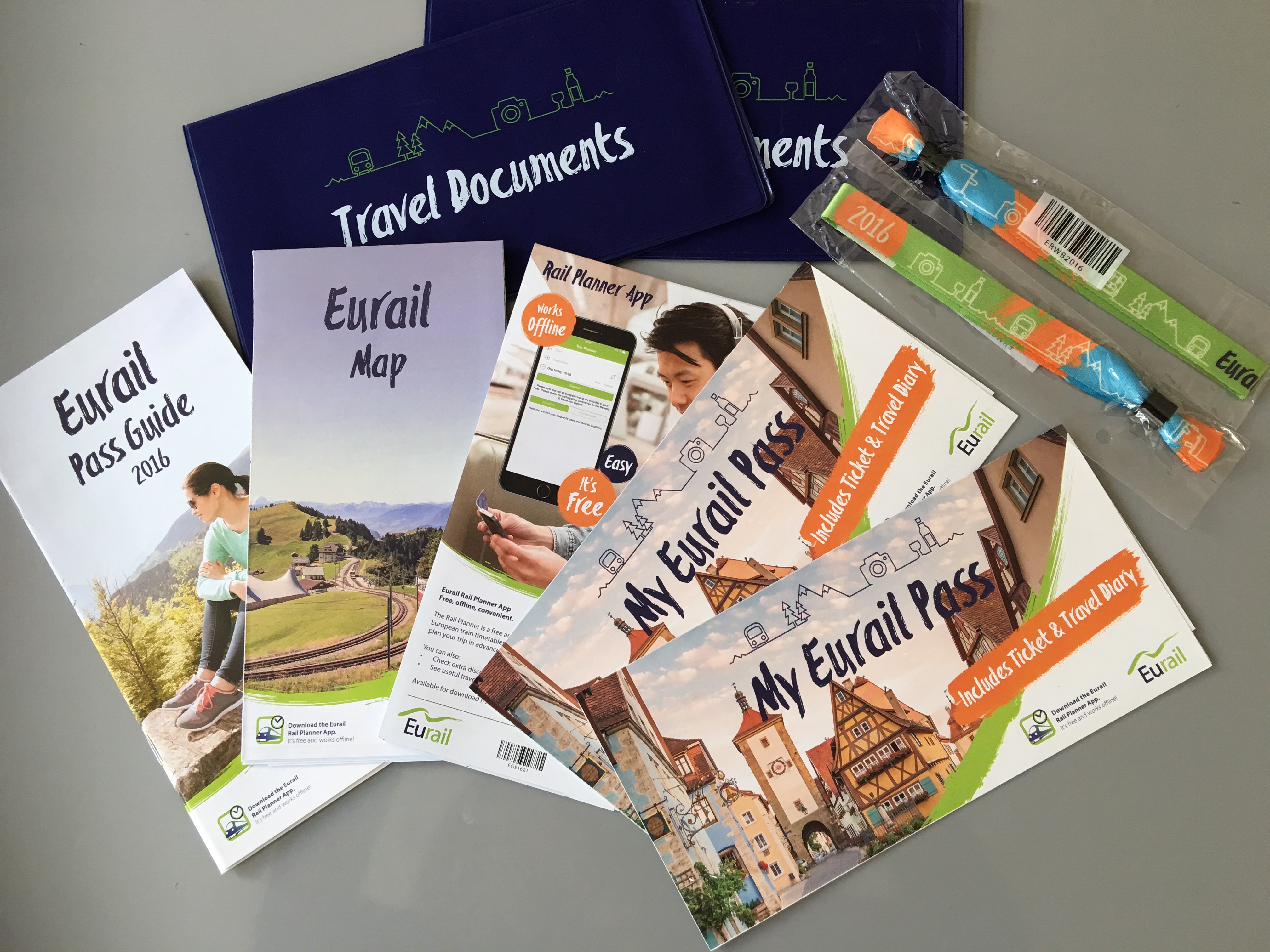 This is the perfect way to travel!

Over the past two months, we have had the opportunity to use fifteen days of train travel nearly all over Europe with our Eurail Global First Class Eurail Pass.

As a single Mum, I’ve loved it. For Explorason who is eleven-years-old, train travel is his all-time favorite way to travel. 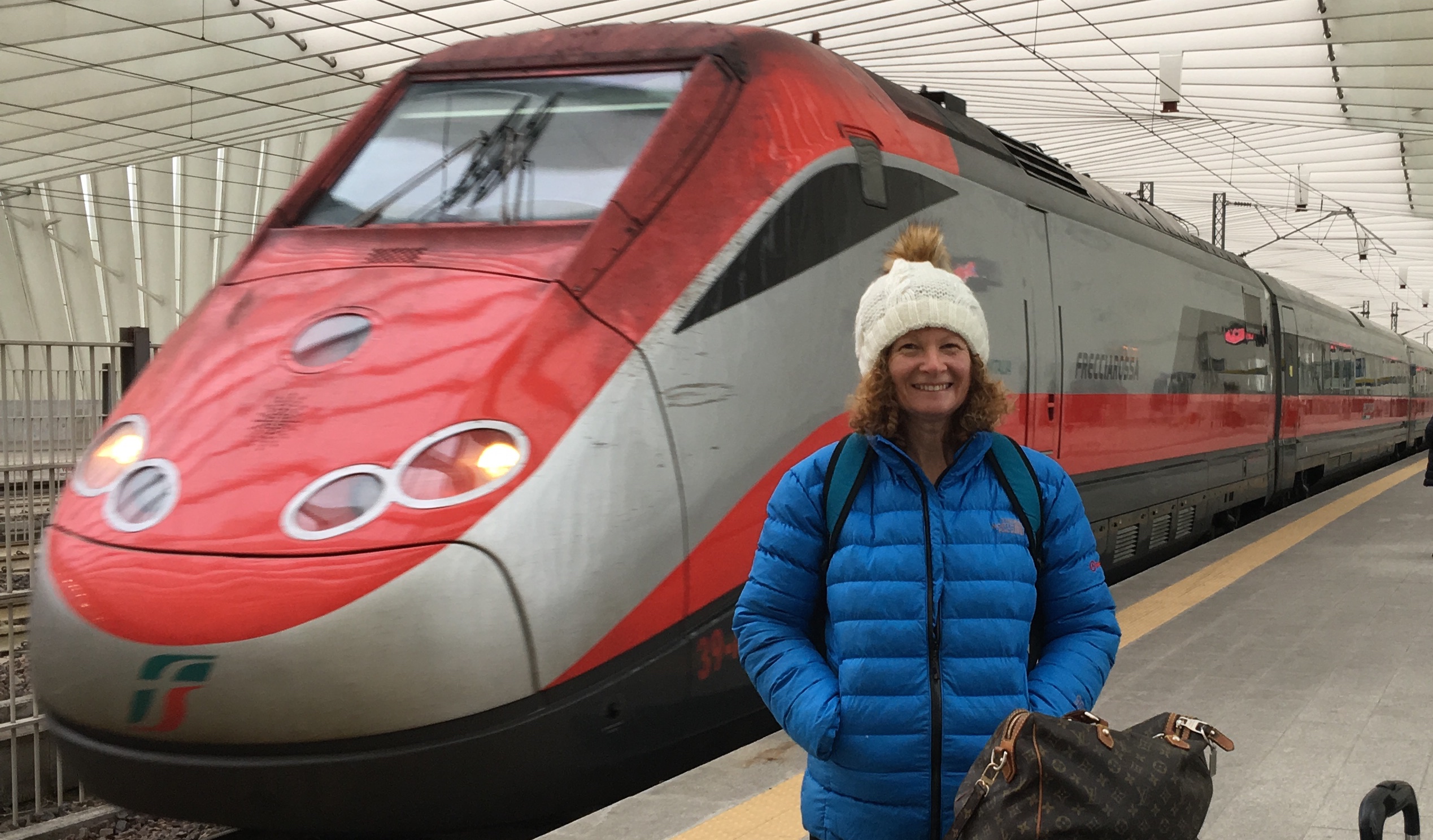 ©Exploramum and Explorason – Exploramum waits for our train in Italy

Two years ago we bought a car in U.K. and traveled from one end of Europe and back again for over twelve months.

Although I loved the freedom of having a car, there were a LOT of hidden expenses and problems we faced.  Here are just some.

I also injured my hand in a fall on this trip. I could never have driven a car, but train travel was perfect because I could sit and rest it.

With the train, you might have to pay for booking/reservation fee on some journeys, a taxi or other transport from the station, but that is it.

I was able to sit back and relax without any stress of driving on the ‘other side of the road’ for an Australian, and even if the weather was terrible (i.e. snowing) I could just relax. I had no worries about traffic jams, crazy drivers, finding parking spaces, drivers cutting me off or hitting the car, one-way streets, skinny streets, no through roads, etc. 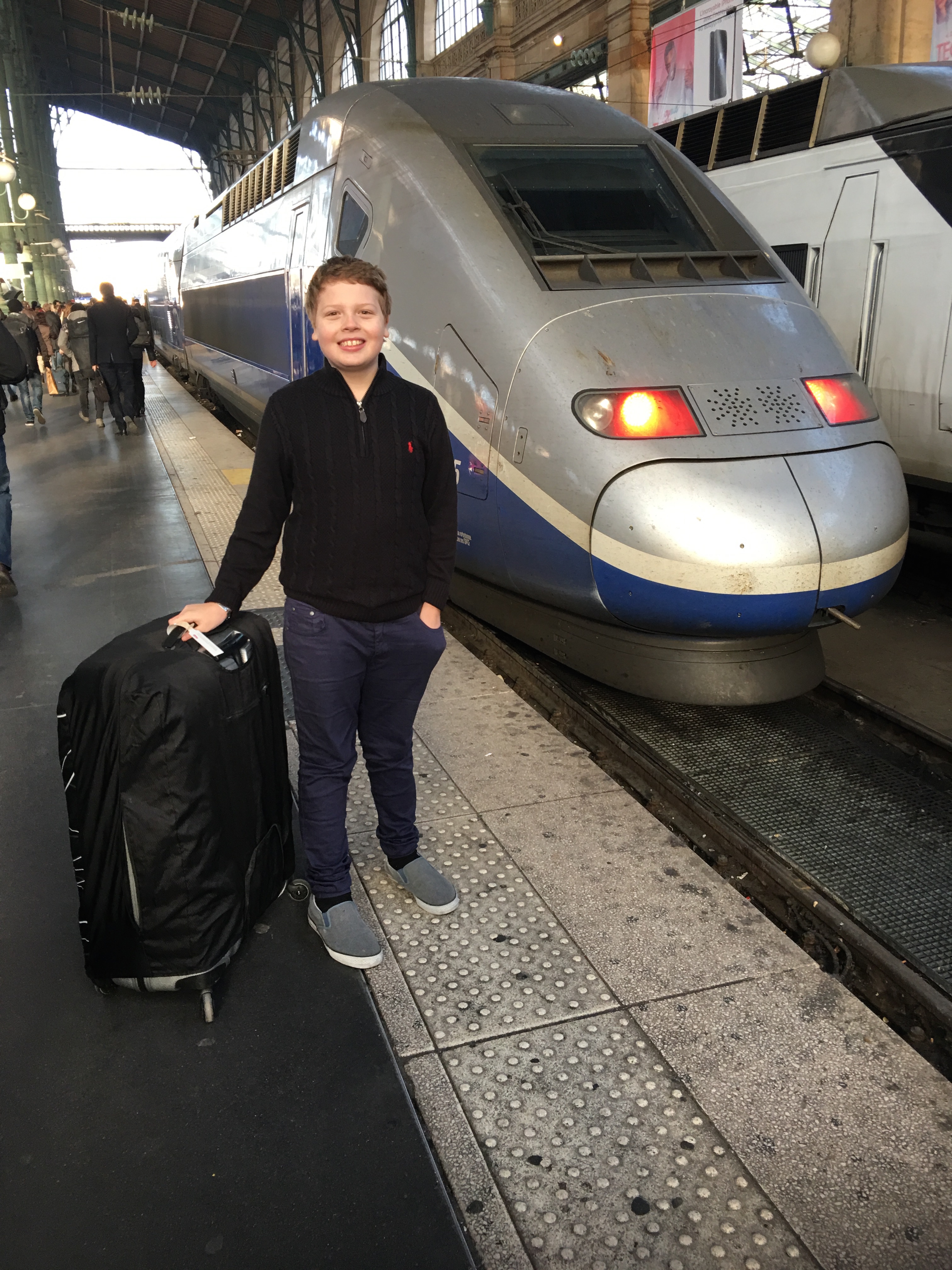 ©Exploramum and Explorason – Explorason beside the very first train we took in Paris, France

In Europe, there is often no coach station. We were left waiting on the road, so if the coach is late (as was the case in Lille where it was 2-hours late), we froze to the point my son was nearly crying. There were no toilets and no update on how late the coach would be. I had to allow my son to cross a road and use a hotel lavatory without me as I was concerned the coach would come and we would miss it.

They also refused to allow us to reserve seats, which meant we had to sit near the rear, and my son gets bus-sick.  This is no fun for 5 hours.

There is little room to walk up and down, and the toilet was a tiny cubicle that overflowed onto the floor.

With the train, we have a station to wait in that is dry and protected. First Class lounges are available in some stations, though we never managed to find one on our routes, as we chose minor routes mainly.

There is plenty of opportunities to walk around the train carriage too, which kids need. If the carriage was empty, my son could even run up and down to let his energy out. It was safe for him to go for a walk because he couldn’t get lost! 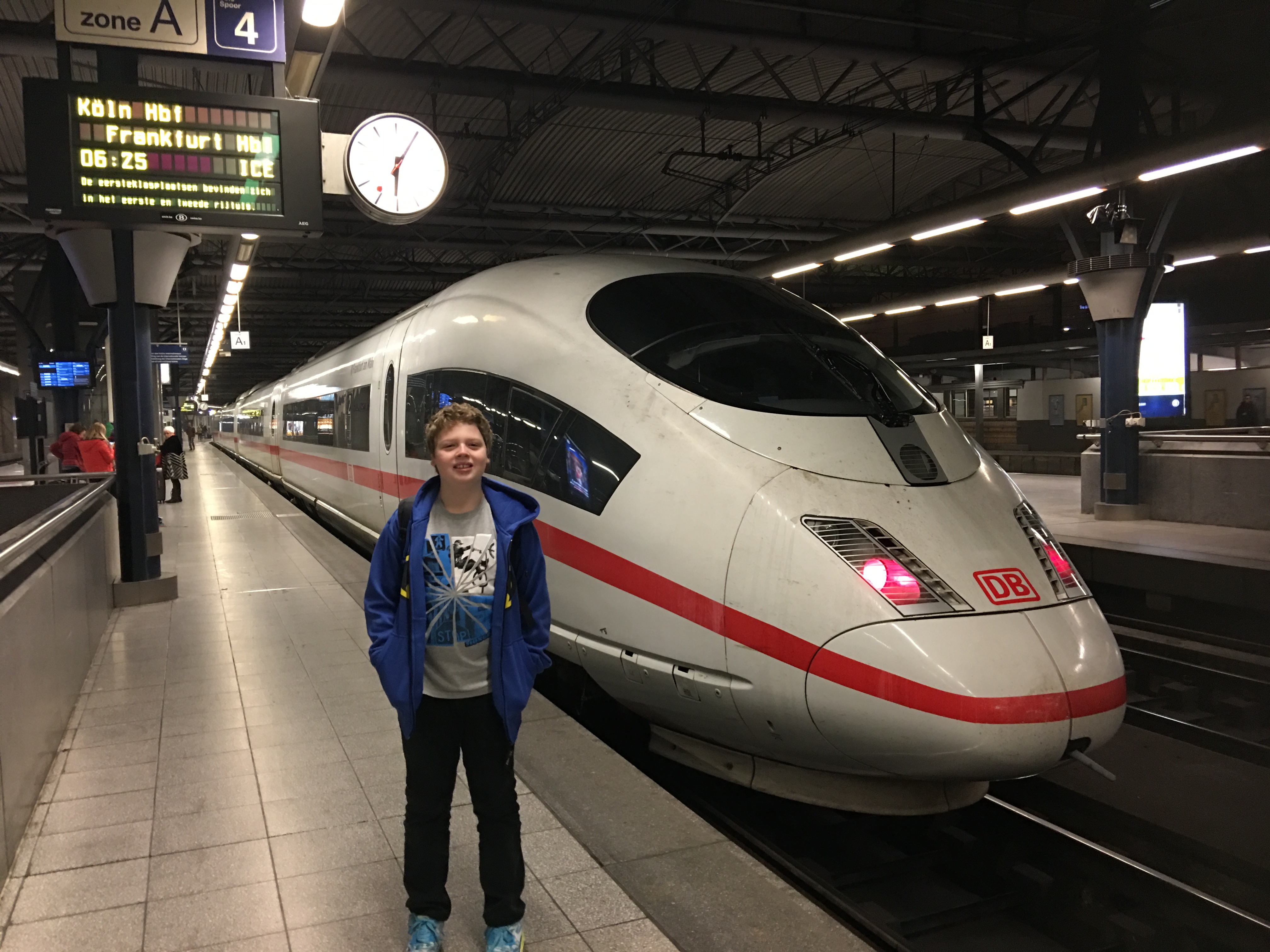 ©Exploramum and Explorason – Connecting trains in Germany was so easy

Cost of transportation to and from the airport; up to two hours wait prior to flight departure; limited or no baggage allowance or possible extra baggage fees; limited flight times; limited flight routes. All of these are reasons NOT to fly, but to use the train instead.

Yesterday we had to fly from an island, and as the plane was full, the airline staff came to remove cabin baggage from us – we were told we had no choice as we were not the first 90 passengers.  As our cabin baggage has our cameras and other technology (i.e. laptops) we were not happy about this. (Fortunately, a nice lady passenger allowed us in the front of the line – first 90 people – to avoid this occurring).

For those of you with aviophobia that have a fear of flying, train travel is an ideal alternative.

With some destinations (when we would be heading to a new country) the airline requires being at the airport a minimum of two hours prior to departure. Airports are often way out of town requiring an extra hour just to get there.  If you add up commuting time, wait time, flight time etc, the train was actually faster!

Lifting the bags up into the train carriage was at time difficult if the platform was low, but 9 times out of 10 there was a lovely gentleman to assist us. Stairs were at times difficult, but most major train stations had an elevator or escalator.

I did find that a lot of train stations had crazy paving which made it a challenge when I was rolling two heavy suitcases, but this is also the case in a lot of European old cities whether you take the train or a plane.

With the train, we found more available trains going frequently throughout the day, fast connections, realistic travel times, easy public transport to most trains, very little wait time, and unlimited baggage allowance just to list a few of the benefits. 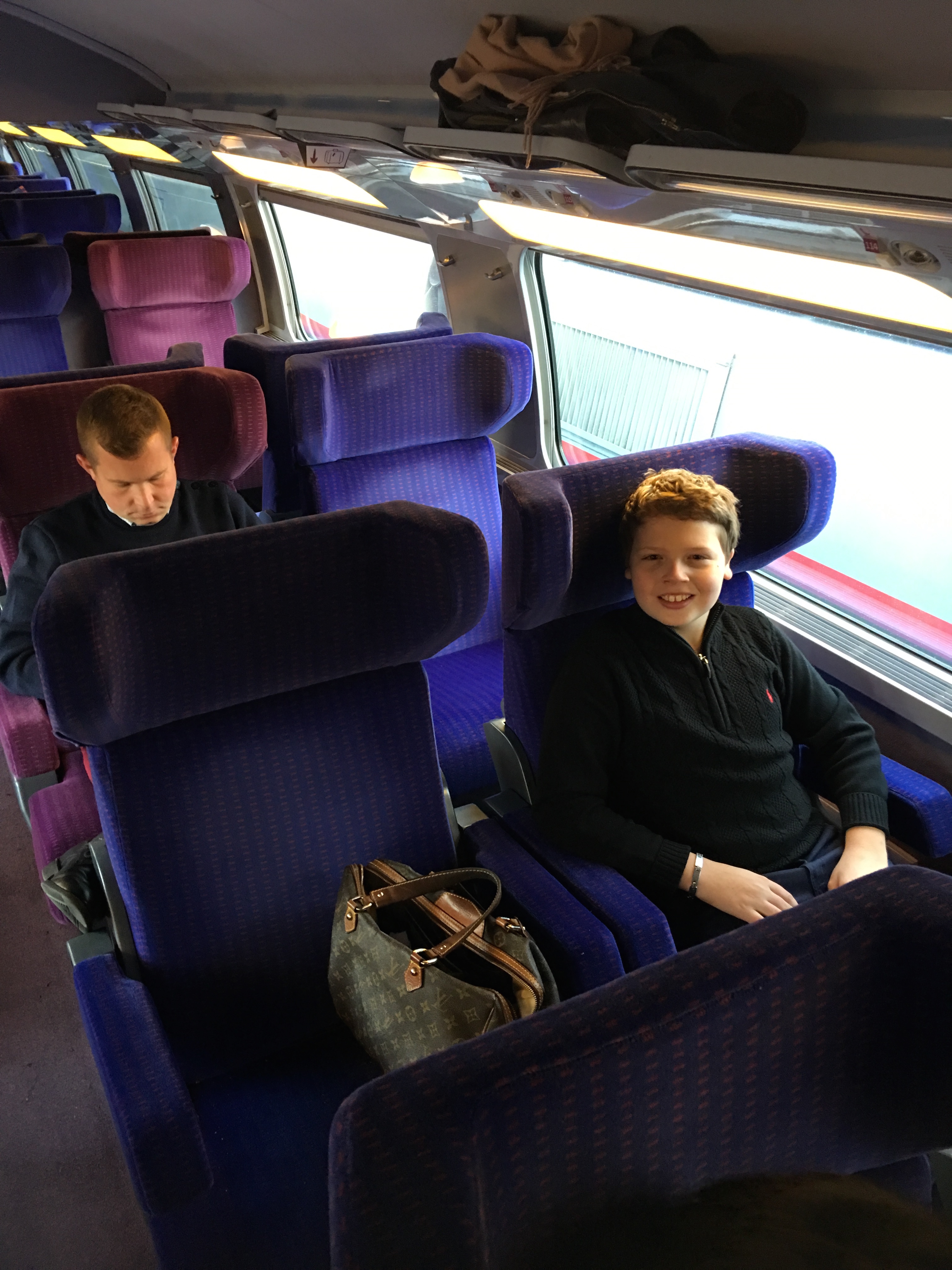 I try to always keep ‘on the ground as much as possible’. With our Eurail Pass, we were able to see the countryside and quaint little villages, that we would have completely missed out on if we flew.  Cinque Terre and the Italian and French coastline is some of the most scenic in the world, and as the train tracks hug the coastline, the view is breathtaking. Not even a car can drive along parts as close as the train travels. 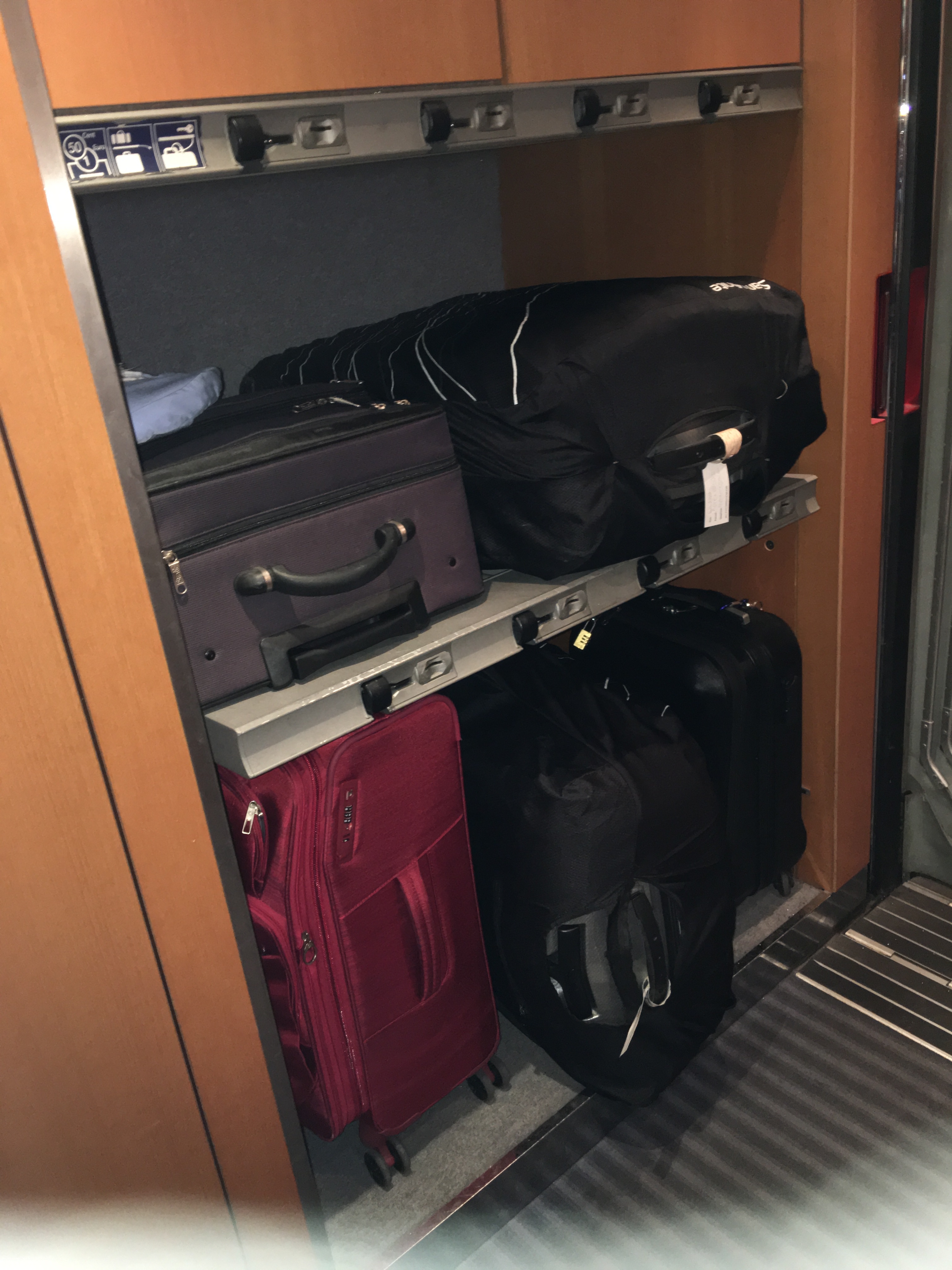 We met and chatted to many European and overseas travelers when we were on the train. It certainly was very social, and we found we often gained knowledge of places we were heading to from other travelers which were also great. 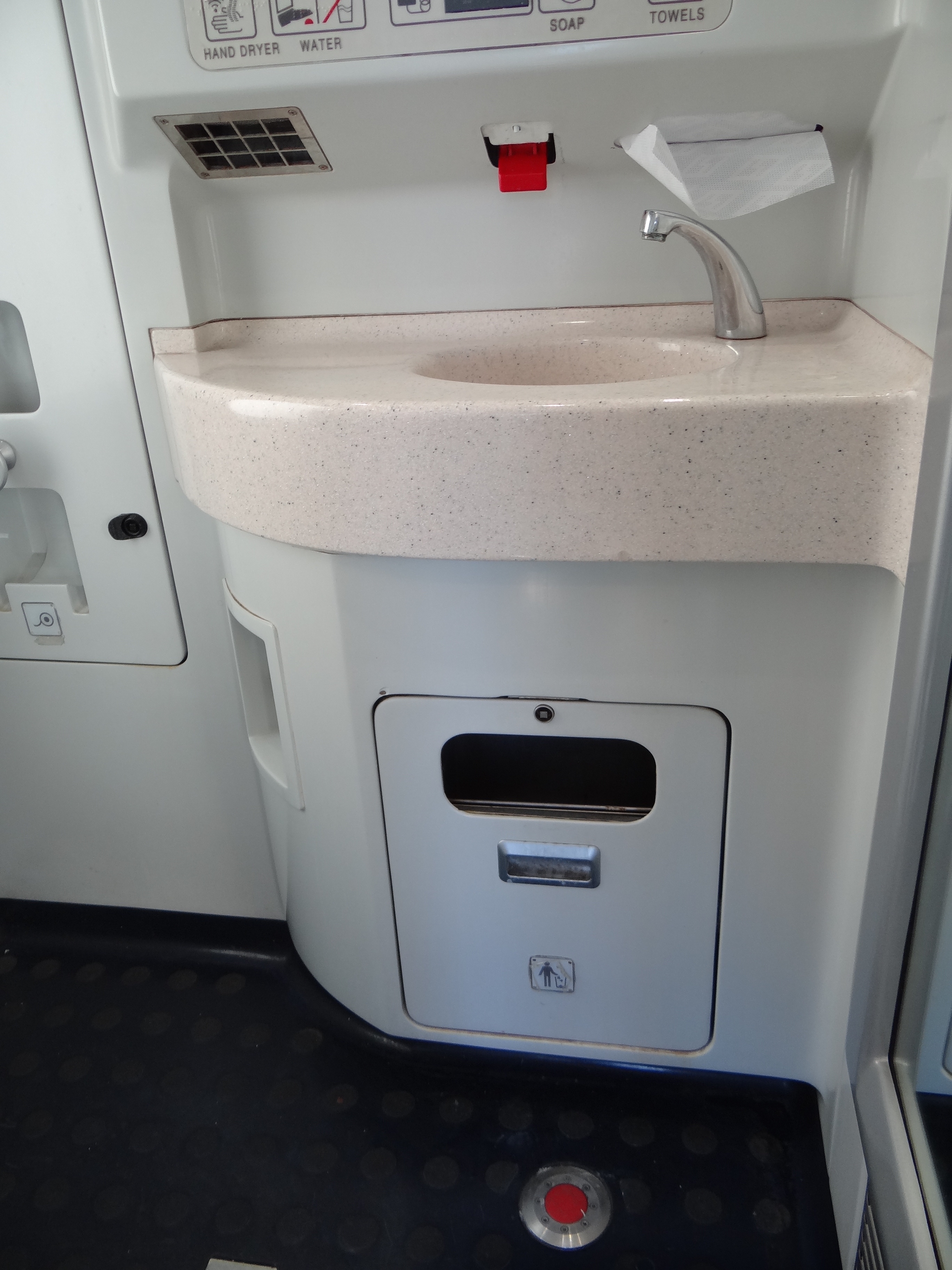 Facilities On The Train

Trains in Europe often have fabulous toilets. Spacious, clean, with foot pedals for hygiene, and also numerous toilets throughout the carriages, so if one is out of order or busy, there is another one to use. Apart from if you are waiting in the station, you can use the restroom at any time.  All the cubicles I used had toilet paper, soap and running water – even on the regional trains. 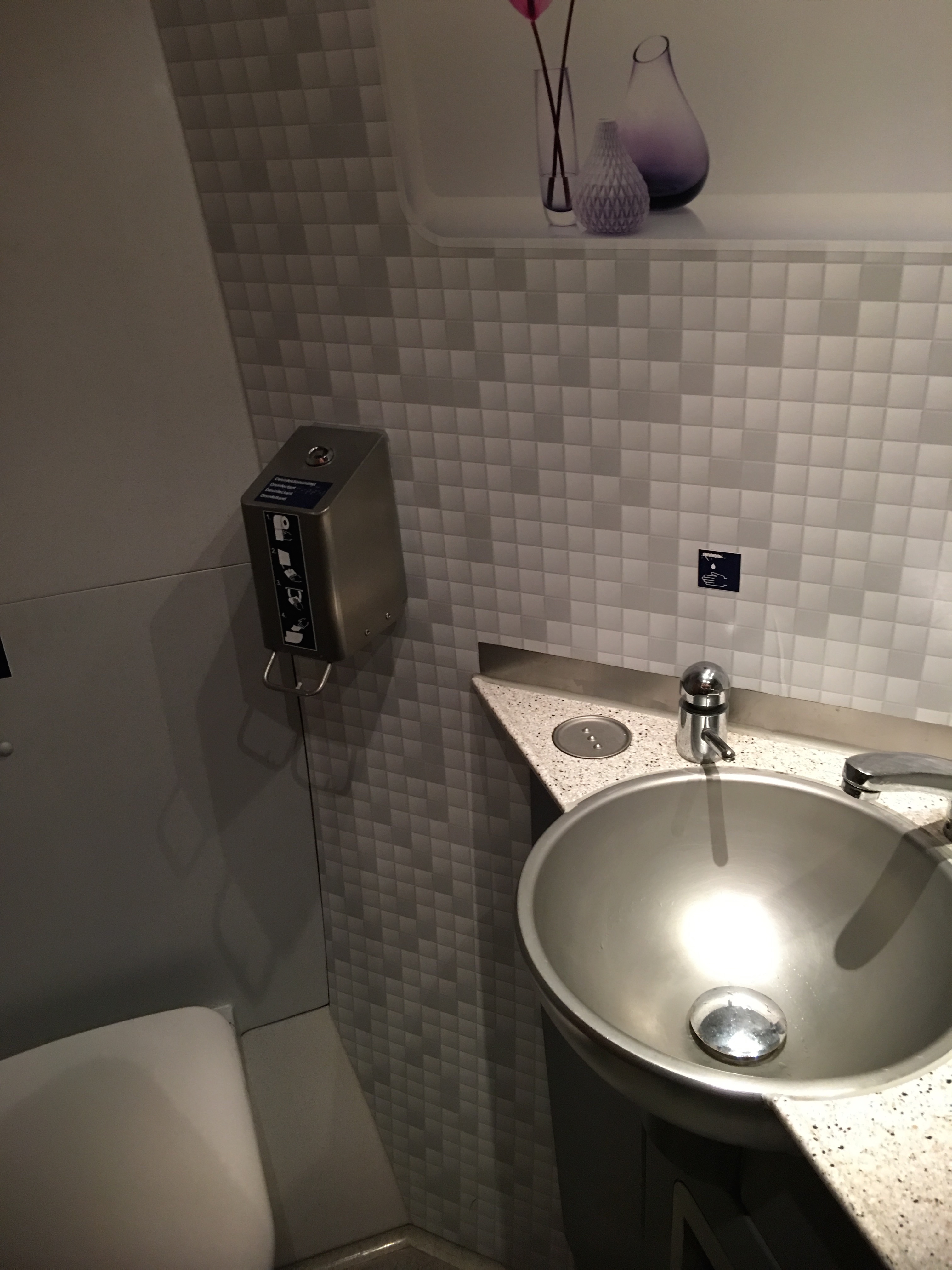 ©Exploramum and Explorason – This train had lovely wallpaper with flowers and a vase. It was like a restroom in a restaurant

There is nothing worse than having to try to use the lavatory as the coach rounds a corner or hits a bump.  Once I had to STAND on top of the toilet lid on a bus because the toilet had overflowed onto the floor – gross. Coaches also often lock the toilet door so the driver doesn’t have to clean it, or one is not available. Then the bus will not stop, and ‘holding on’ can be agony (we once had a bus that wouldn’t stop for 5 hours.  For a car, it is often a matter of waiting to find a rest stop and in most cases, there is a charge at the refueling stations, whilst train toilets are free of charge. 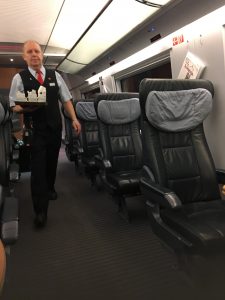 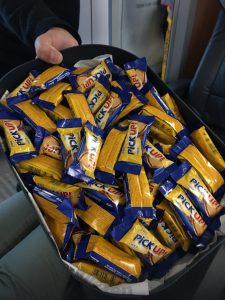 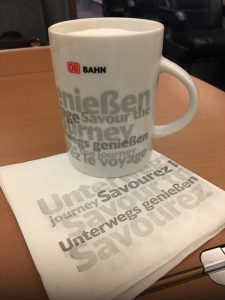 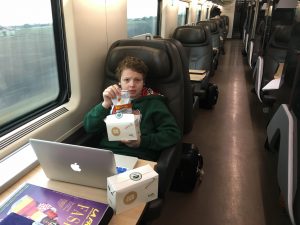 With Eurail, most of the fast trains have a cafeteria carriage.  I found the food and drink prices affordable, and of course, there is always great coffee served in countries like Italy. Most trains also had a mobile cart that came around to serve coffee and snack, so if we were busy on the laptops, we didn’t even need to leave our seat. Plus the seats had a table or tray, and the café carriage has nice tables and chairs.

There is no need to have to juggle carrying a hot ‘cuppa’ onto the train when one is served in air-conditioned comfort.

Most trains also had a mobile cart that came around to serve coffee and snack, so if we were busy on the laptops, we didn’t even need to leave our seat. Plus the seats had a table or tray, and the café carriage has nice tables and chairs.

On a few trains, we were served either a complimentary box of water and snacks, or even little chocolates were offered to us on a tray. 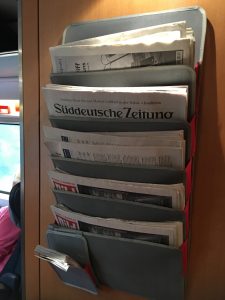 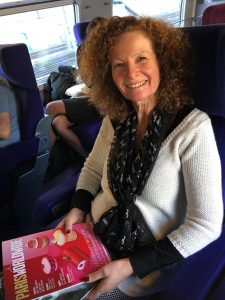 CATCH UP WITH THE NEWS:

Newspapers and magazines are often available free of charge on the trains too. 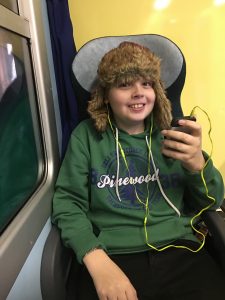 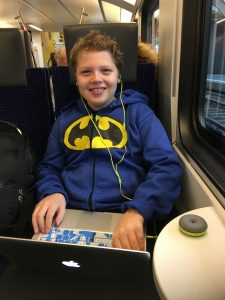 WIFI AND POWER TO CHARGE:

Explorason’s favorite reason for train travel!  On many (not all) of the trains, we were able to charge our technology and have use of free wifi.  This meant I could write articles, catch up on social media and the world news, write emails, plan our travel or sit back and watch a movie on the laptop. None of this I could do if I was driving a car. 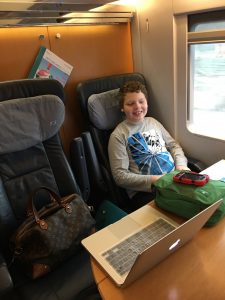 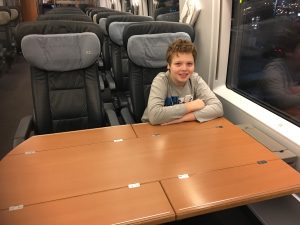 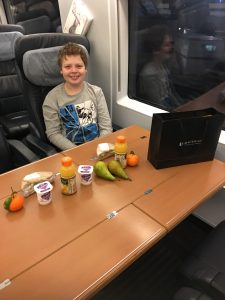 Because all the seats had either a fold-down tray or a center table, we were able to use our computers, and also spread out and have Explorason do his school work. We could eat meals, have drinks, and more. 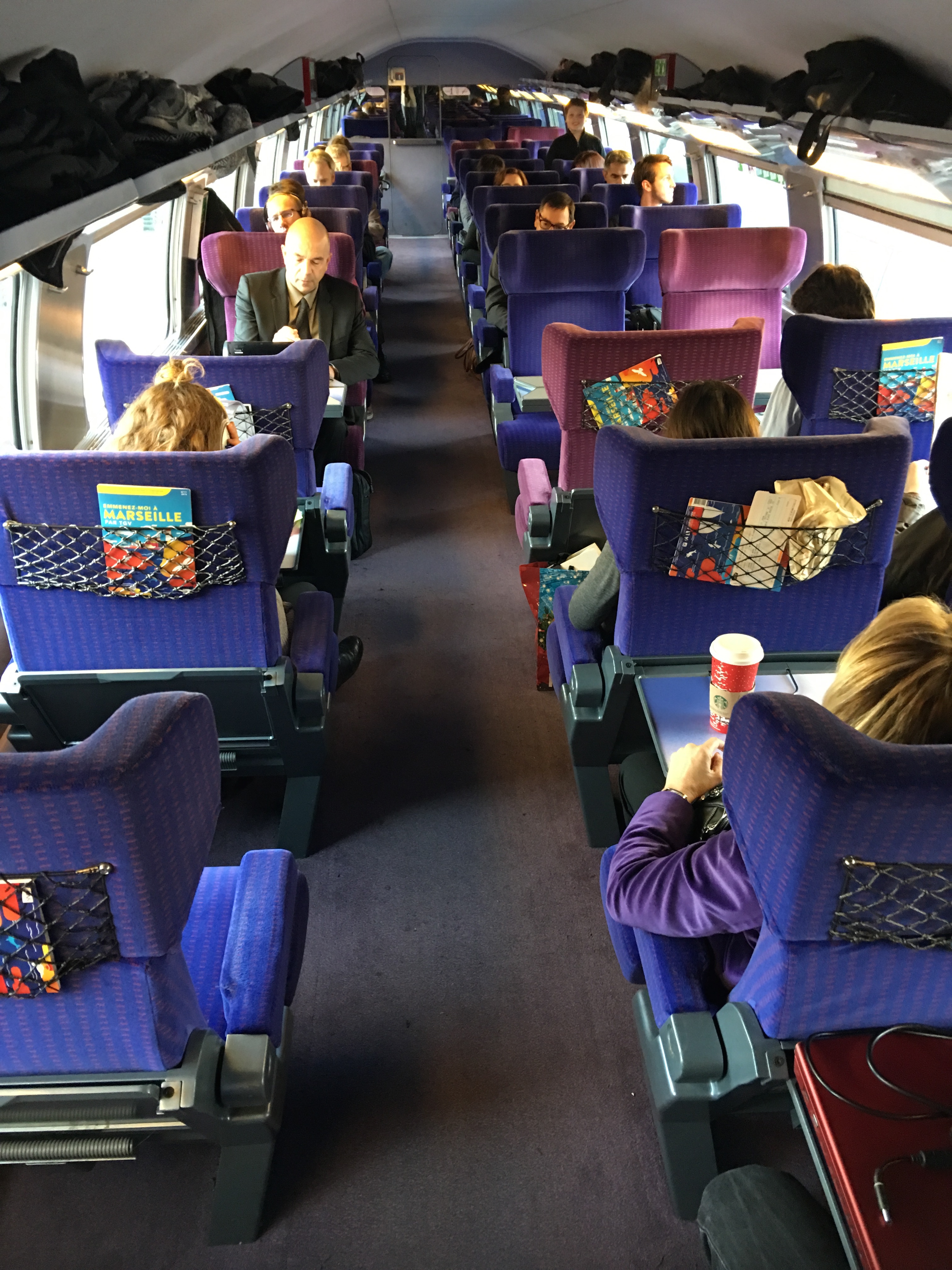 The seats in First Class are definitely superior.  Headrests, lay back, plush comfort and sometimes even a private carriage, we loved traveling in style. The seats on our Swiss train were far more superior than the Irish Air company we used to fly with recently to get from an island. More leg room, lovely fabric, spacious etc. 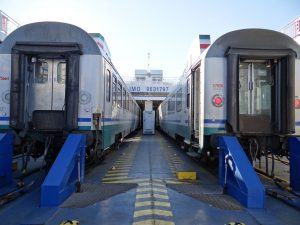 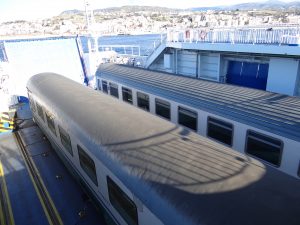 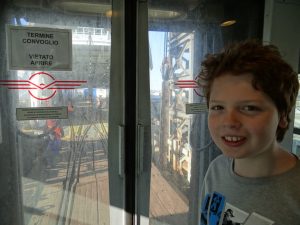 We felt very secure on the trains.  Guards are in attendance, there is Border Police in some areas that come on board to check passports, and staff frequently walked the main train corridor which helped us to feel really safe. Once we even had an enclosed cabin with curtains within the train carriage, so we were able to close the door and draw the curtains for total privacy and Explorason spread out for a sleep.

In Italy, we were on a regional train, but the train went on a ship to Sicily. Not only was this educational, but the staff allowed us to get off and assisted Explorason and I, on the ship when we became separated when using the bathrooms. The railway staff rallied around helping us to find each other! 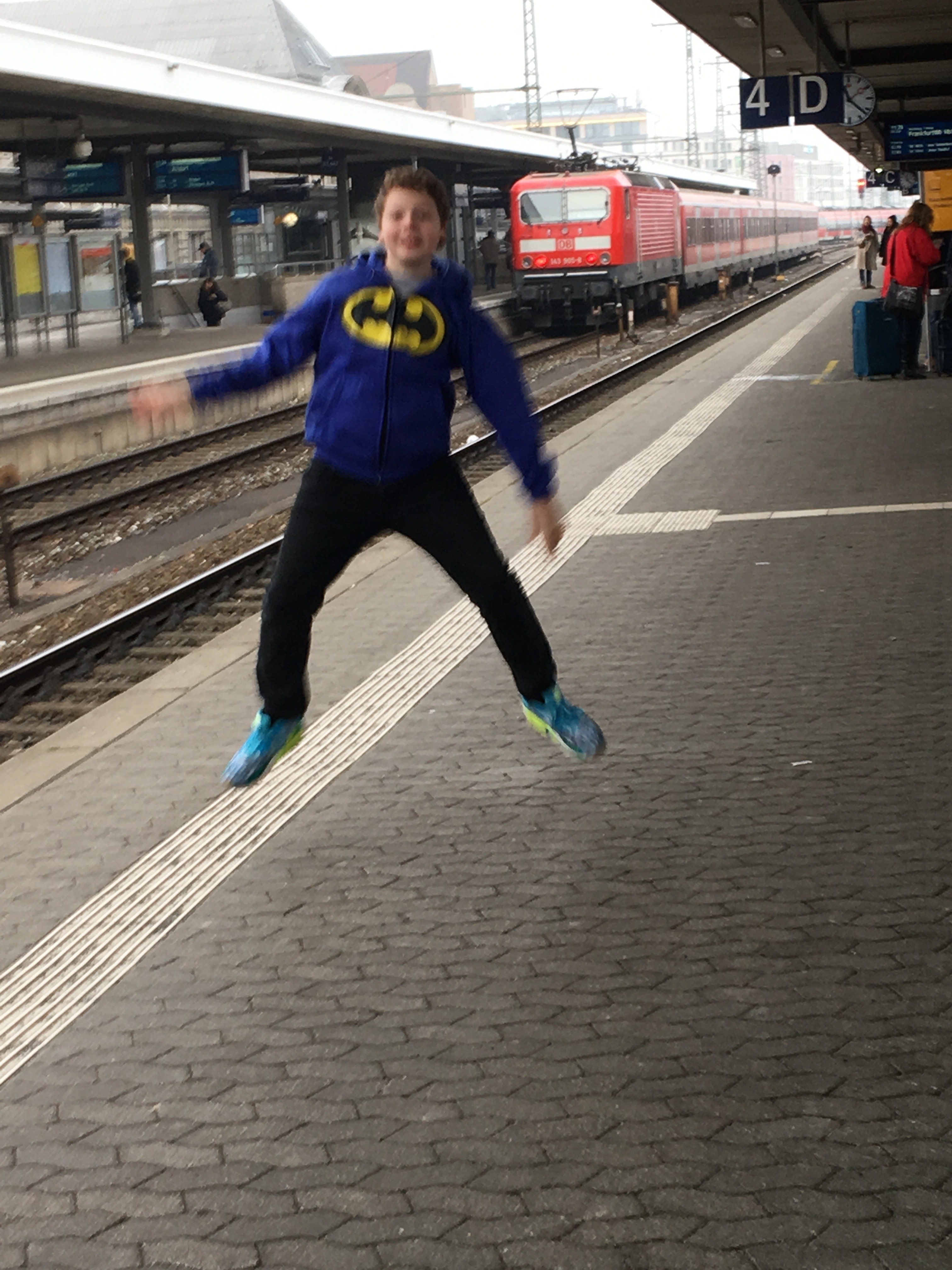 We were jumping for joy with the affordability of our train travel.

Our Eurail First Class train pass finished at midnight last night so it was fitting that on the last night we took the train directly into the city. We walked two blocks with our rolling bags and arrived at our hotel. Previously I would have always taken a taxi. Now with our new confident way of traveling by train, we are saving Euro that we can spend on extending our travels.

I think that value for money and the overall experience of train travel was one of the best decisions we made for this European trip.

So glad we decided on a Eurail Pass! 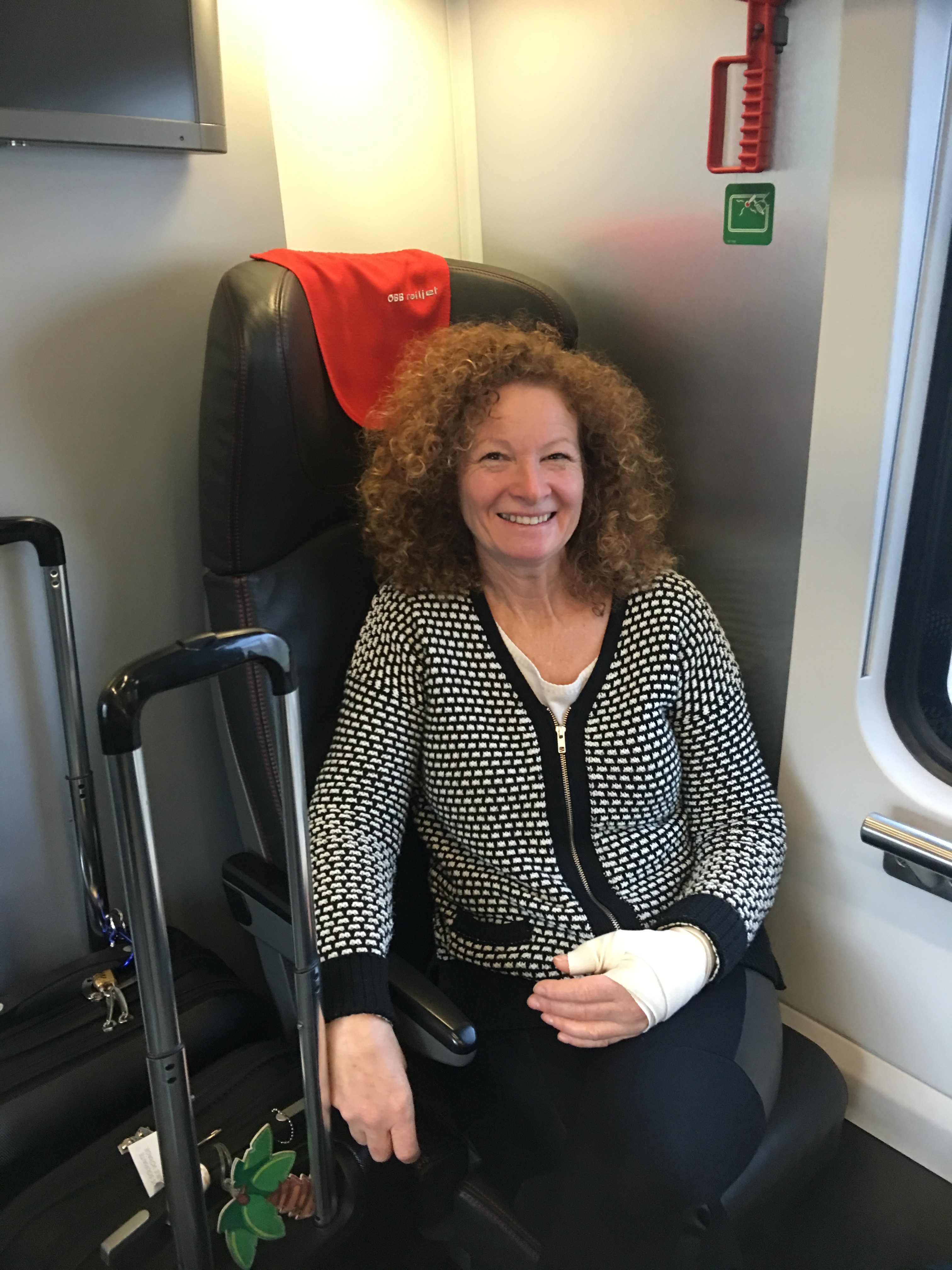 For more information on Eurail, I suggest reading the Nomadic Notes Eurail article.

If you enjoyed this article or found it useful – please consider sharing it.

Want to travel to Europe?