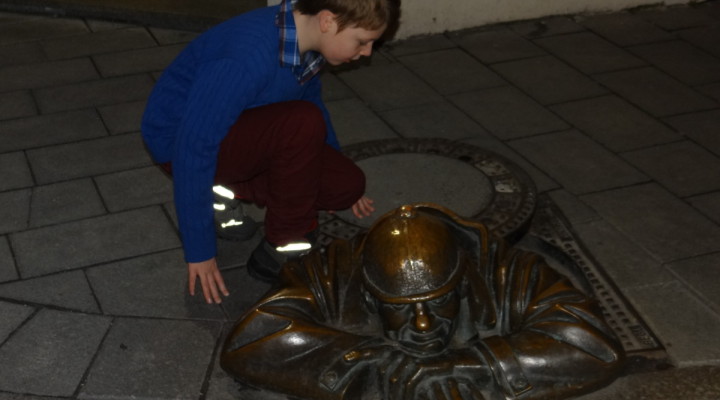 Today has seen us travel through three countries. Read on to find out about our eventful day.

We caught the train into Warsaw, and then had a bit of an adventure locating the correct train from the Central Station in Warsaw to the Airport.  The ticket lady proved to take extreme delight in making it really difficult for us (telling us in English all the answers on how she was unable to advise us), even though she knew we were racing and out of time.

Fortunately a mother with her two sons (one son learned English at school), and then another man came to our aid.  We found ourselves on the wrong station platform with little time to spare, and then the ticket lady refused to help us buy a ticket, even though we don’t speak Polish. Considering how nice everyone else has been in Poland, I just hope she was having a bad day and doesn’t treat all tourists like this.  So even though we had already changed terminals we found ourselves racing with big coats and luggage up the stairs and then across and down the next staircase, and we just made the train to the airport with little time to spare.

We then recovered on the 20-minute train ride and arrived at the airport. We again raced, this time through a construction zone, weaving on the road pulling our hand trolley bags between passing cars to the main airport.

There the security lady decided I was her ‘random person’ who needed a thorough pat down and search, even though I never set off any security alarms.  So this was another delay. Then they wouldn’t let the conveyor belt continue with other people’s bags until she finished with me, so it was a stressful time trying to keep my eyes on my handbag and passports etc.

The final event was that the ticket stub showed the wrong lounge to head to, so we arrived just in time, but it was the entirely wrong place in the airport, and the staff at that counter had no idea where we were to go.  We eventually located a departure board and had another run to get to the plane on time.

I sat there feeling like I had run a marathon, and in fact, Explorason later broke out in a heat rash all over from the stress of racing so much.

Not all travel is smooth and relaxing like the adverts you see in magazines of ladies casually sauntering through the Duty-Free with their perfectly applied lipstick.  I certainly was ready for another shower, or a spray of that Duty-Free perfume!

We enjoyed our flight with LOT Polish Airlines and arrived back in Budapest, Hungary. I could have done with a glass of wine but was going to drive, so sparkling water was my drink instead.

Of course, then we had another event – why am I not surprised?  The car number plate had not scanned on entry, so we had to locate the car park attended to enable us to depart through the double boom gates with our pre-paid parking.

Whew.  Once on the motorway, it was a pretty smooth drive through Hungary (our 2nd country of the day) to Bratislava, Slovakia.

Of course, it was night by the time we arrived, but we could see the majestic palace laminated in the distance.   As we crossed the bridge to Devin Hotel, we were awestruck by the beauty of this city. 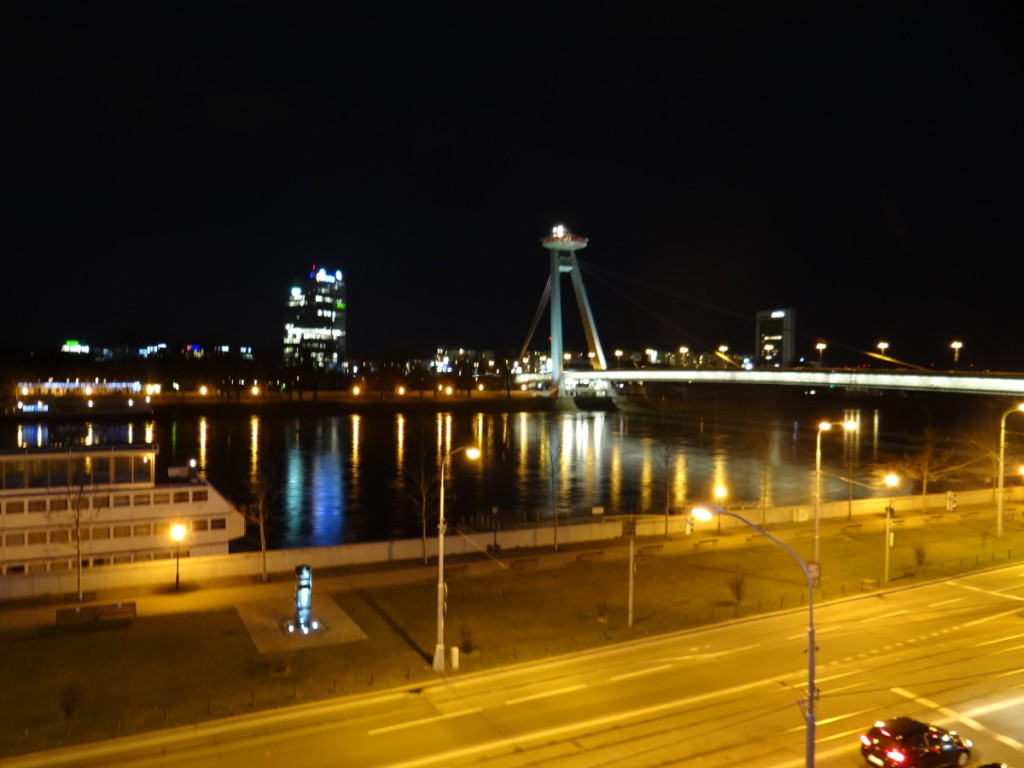 We could see the multi-story building of Hotel Devin across the river in the distance. Our home for the night here in Bratislava, and located in the historical old town.

It had a private car park, so I selected a space right out the front of the reception area, so we felt that leaving our big bags in the rear of the car was a safe option, even though they were well covered.

We wandered past a lovely bar and restaurant in Hotel Devin at the rear of the ground floor and had a good look around.  It is definitely a hotel of old world charm.

The reception was great, giving us a map of the old city and telling us of great places to explore. 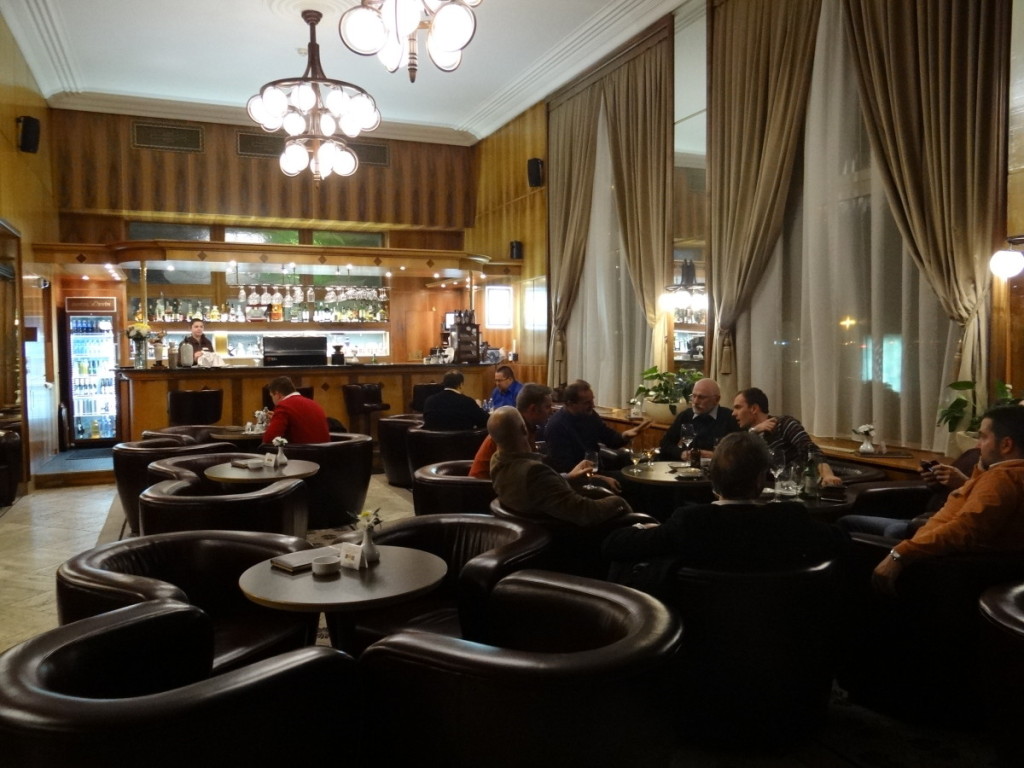 The concierge at Hotel Devin assisted me with our bags to the room, and as we entered the magical evening view before us was just perfect.  We could see a clear uninterrupted view along the river, and across to the other side as the night was such incredible weather.

There is a UFO restaurant in the distance, and I believe you can also go up just to look at the view our across the river, or to the castle.

If we hadn’t been so hungry, I would have ordered a drink and just sat and enjoyed the view for a while.  But nine-year-olds are always hungry, so we decided to head out to the old city for some food.

But on our way, we then discovered we had free use of the sauna room and pool downstairs. So Explorason decided on the quickest dinner I have ever seen him consume, in order for him to come back on this stunning night for a swim in the heated indoor pool. 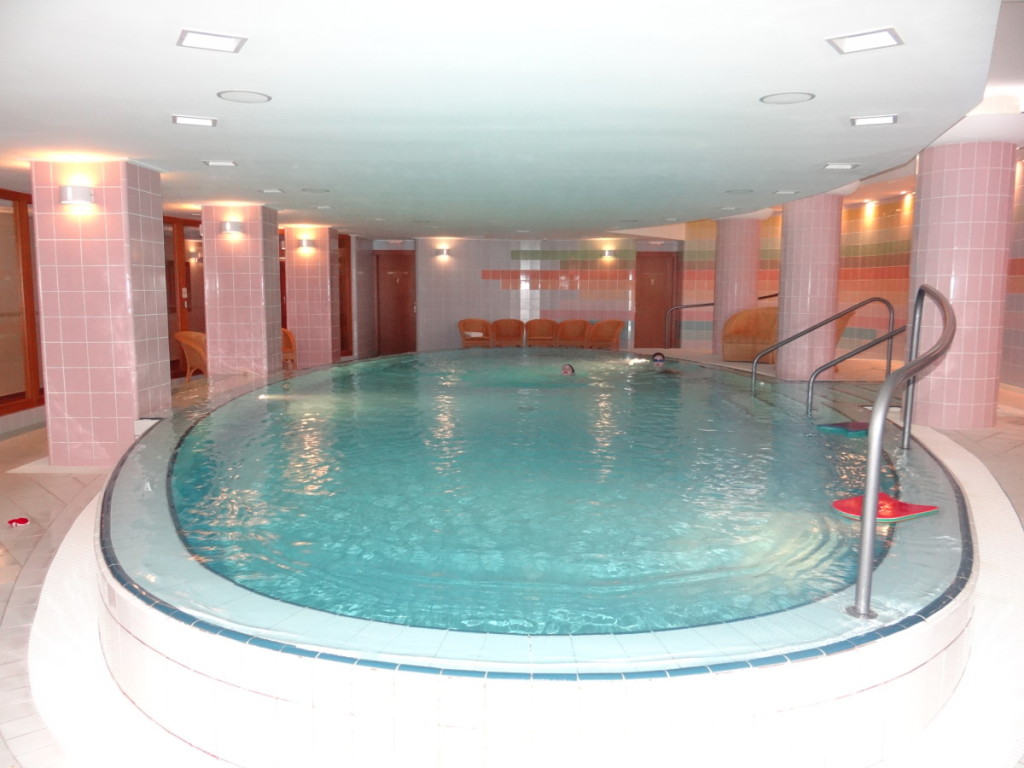 I ended up sitting in the really comfortable chairs by the pool, acting as an adjudicator for a swimming competition.  Kids need undivided attention at times, to make them feel confident and special.  This proved to be that time he needed and I was happy to just have some time really relaxing in this beautiful environment.

Before I knew it, 9:00 p.m. had rolled around and it was time to head upstairs.  It had been a really long day, but Explorason was so pleased with himself. 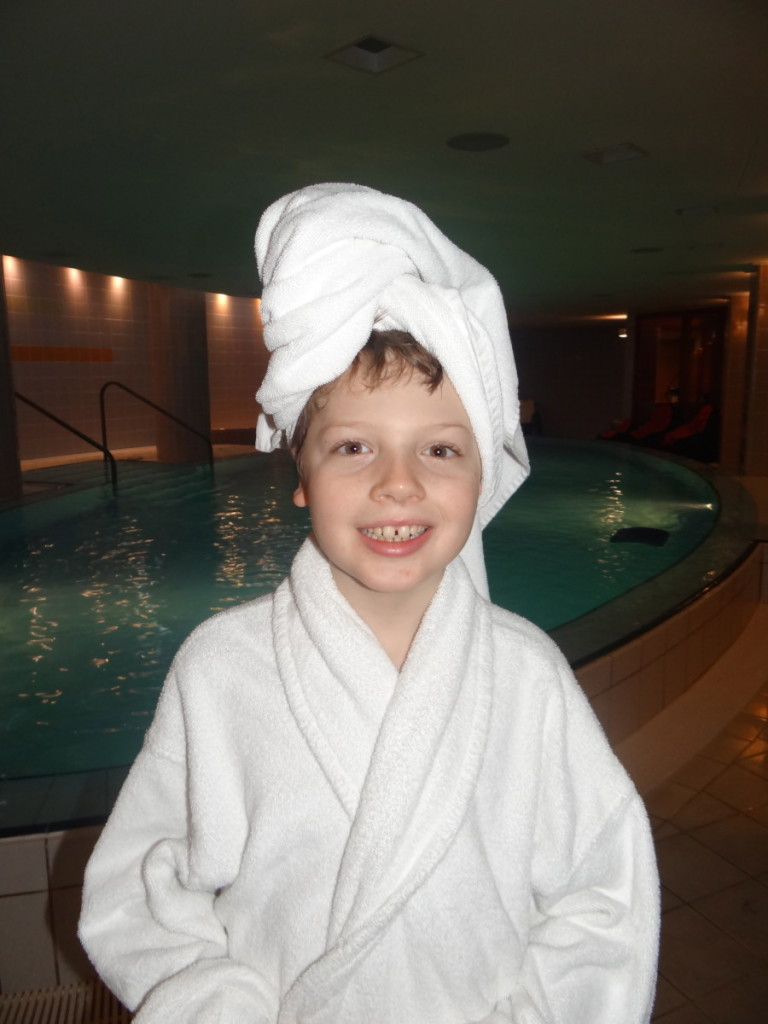 Exploramum and Explorason – Slovakia, Bratislava – Hotel Devin – Explorason in one of the robe and slippers they provide guests

I had him ready for bed and tucked in, and then I sat with a nice cup of fruit tea and started out at our magnificent night view as he softly slept.  It was lovely to have a tea and coffee set in the room – perfect for just having that time in my PJ’s to myself.

Next morning I grabbed my new favorite chair whilst he was still sleeping and had my quiet time of reflection.  The UFO opposite looked really different in the daytime. 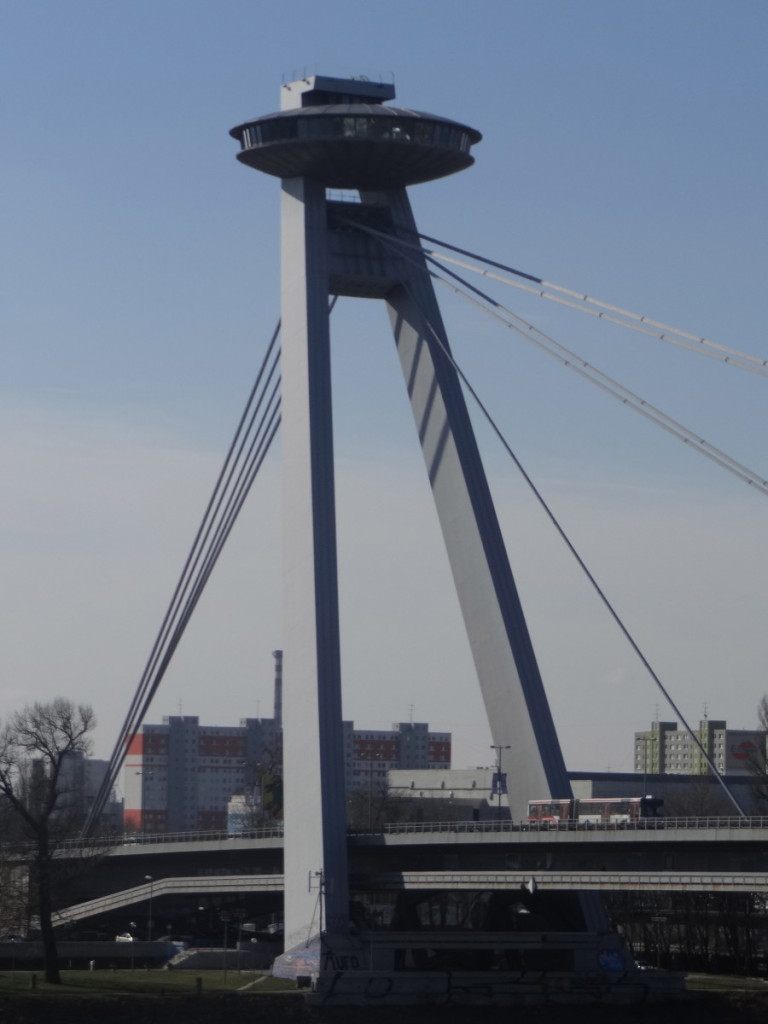 The breakfast room at Hotel Devin is quite majestic.  We sat along the window side, so we could look out at the view. The lovely lady showed us to our table and took our hot drink order.   It was a bit of a lesson in not leaving valuable things on the table while we went for our food, as we came back and a man was oblivious to our room card and mobile telephone sitting there, and he was drinking my coffee!

The staff handled it ever so graciously as he could;t grasp the fact it wasn’t his place, so we just moved on to to the next table, and the waitress then brought me a new coffee.  I noticed time and time again how friendly gracious the staff at Hotel Devin were in handling every matter that came their way too. 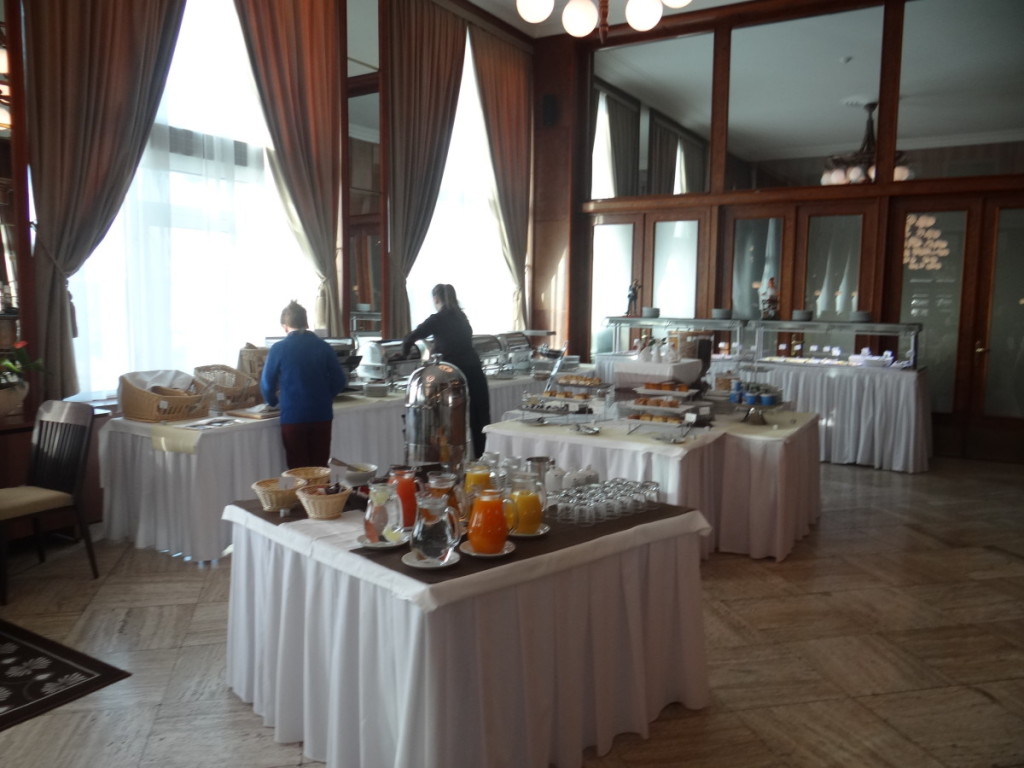 We were able to leave our car at Devin Hotel (even though we had checked out) while we looked around the old town which was an added bonus.  The sky was a perfect blue, and it was even warming up enough not to take a coat. 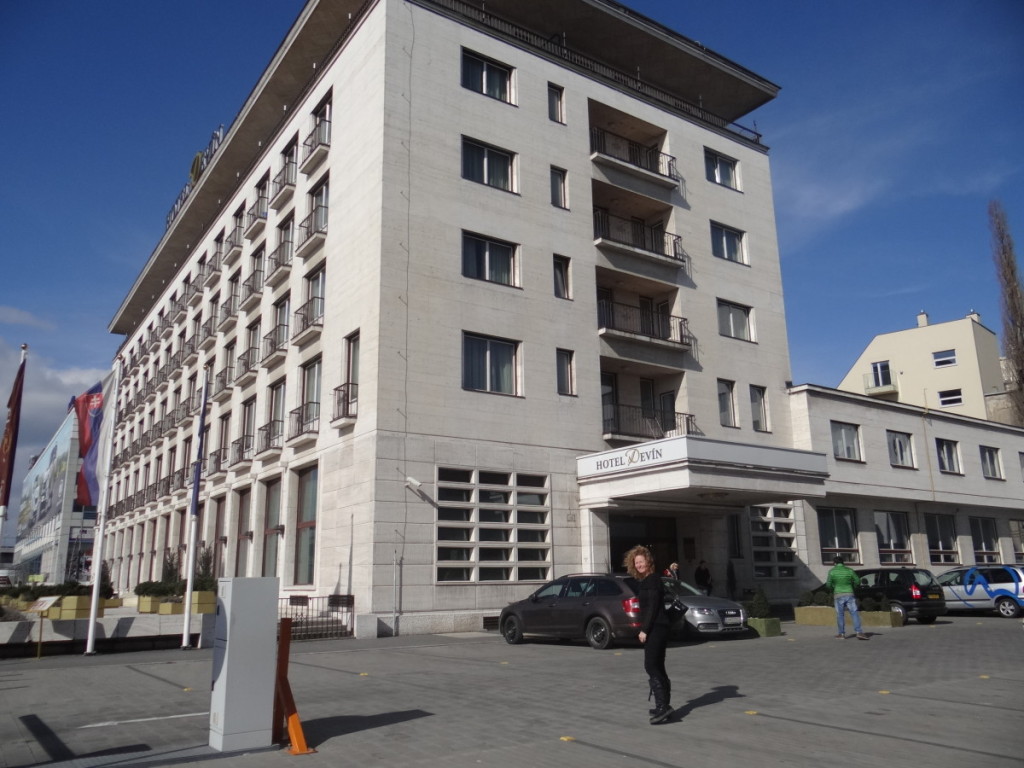 There is a lot of street art like the one below in Bratislava.  We had a good time walking around for about 1 hour or so. 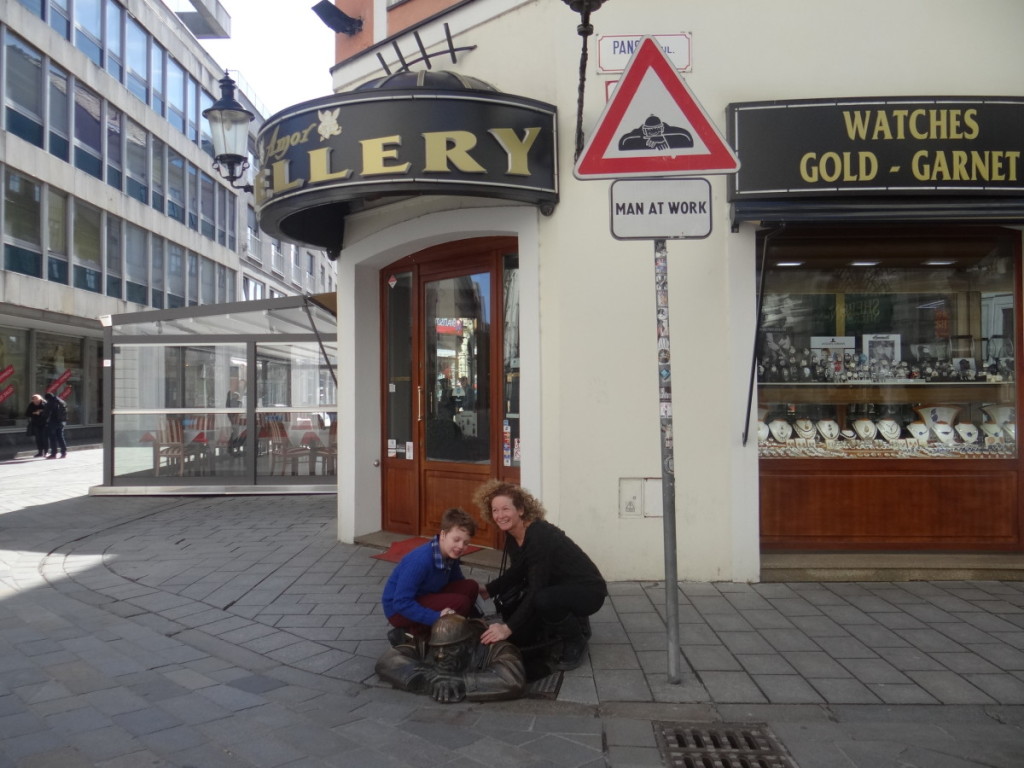 Here is a bit more of the street art, and we had a lot of fun in Bratislava.  We have so many crazy photos. 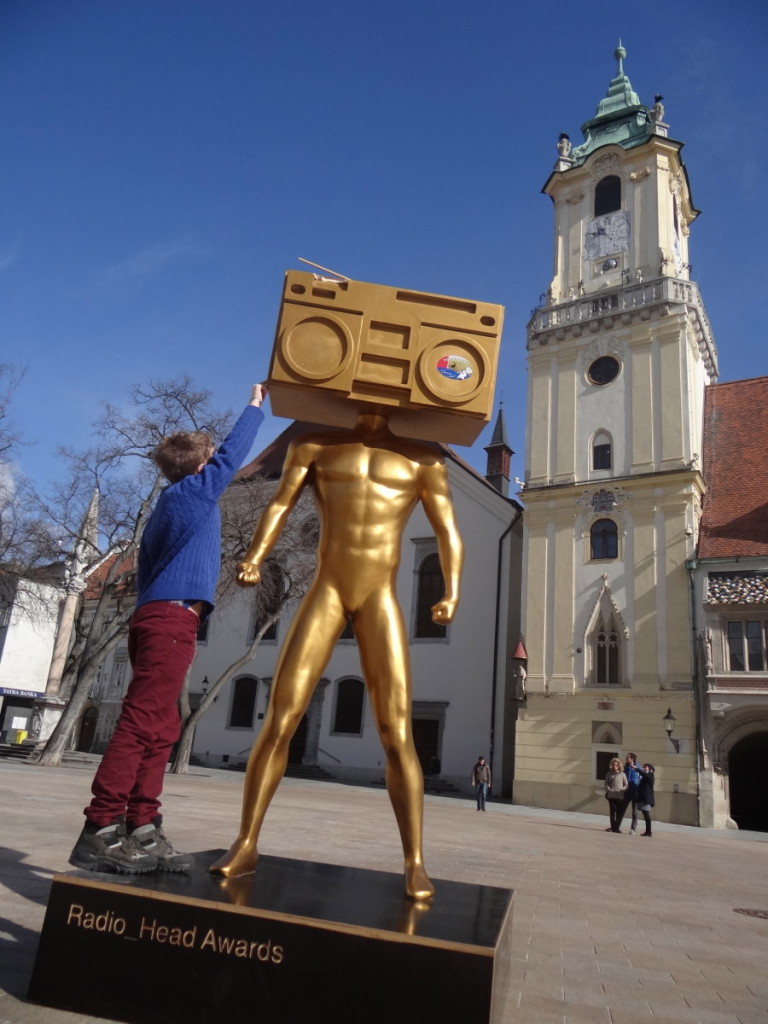 They have some beautiful handicrafts to buy too, so we bought a flag, and a small memory item to hang on our Christmas tree, and a gift for a friend who is celebrating her birthday soon. 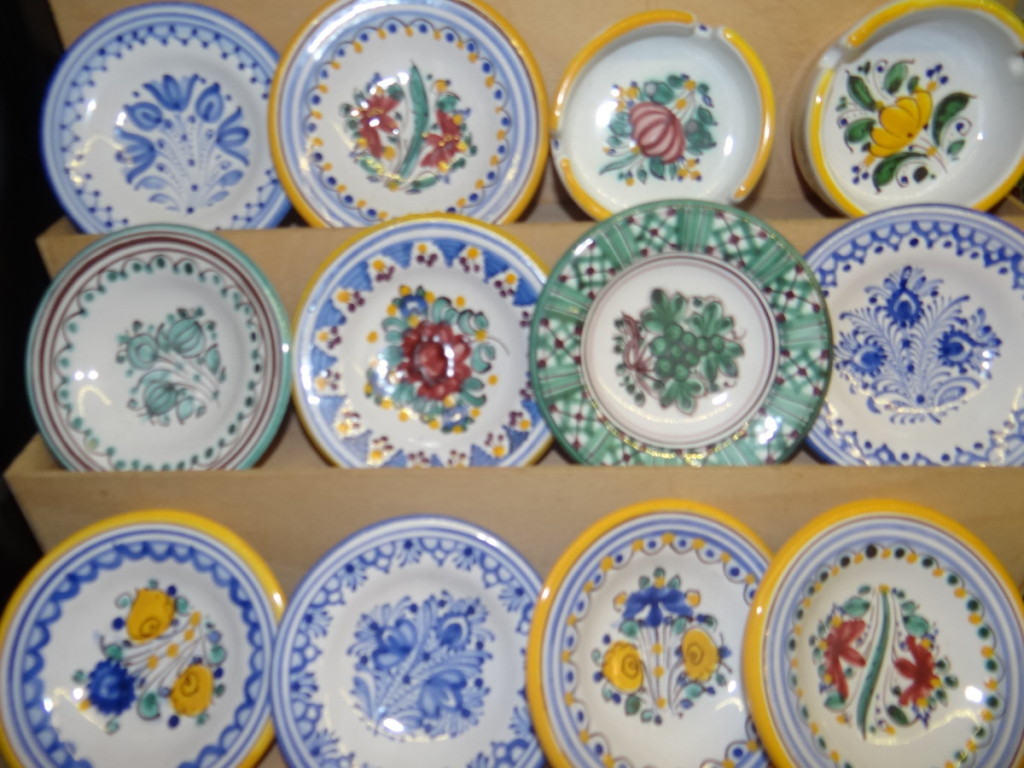 As we walked back through Bratislava, we loved the old city. 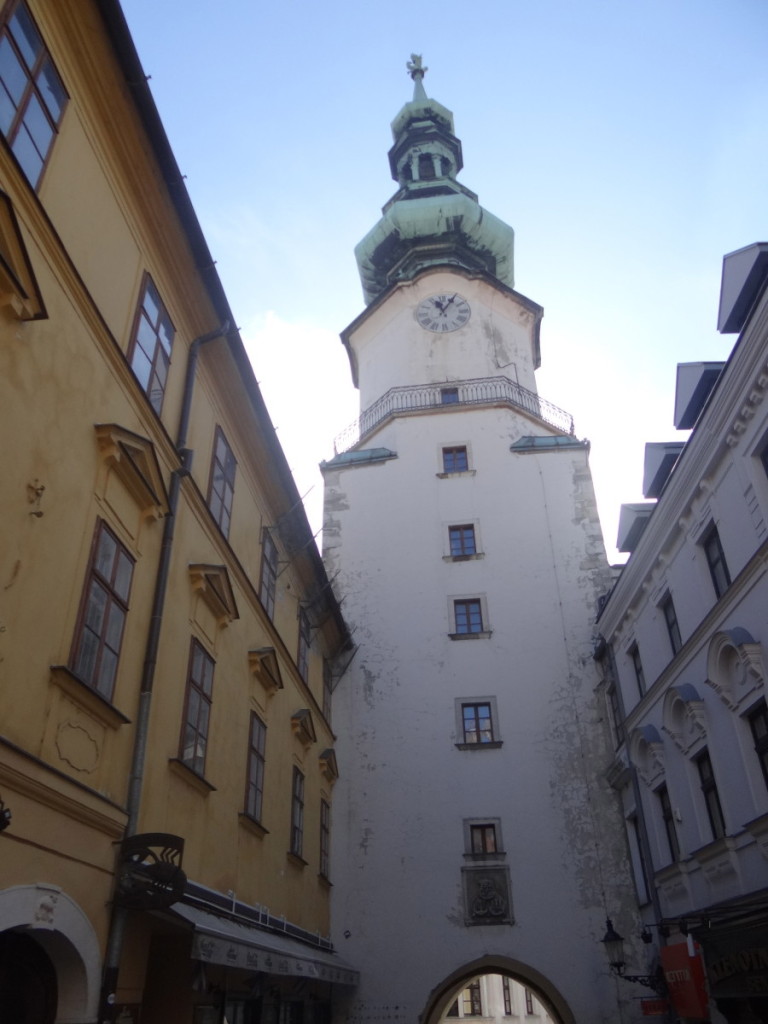 We found we were running out of time so with walking back to the car and driving to the palace, we needed to head on.

Even though it is quite close, driving to that place isn’t so easy and finding a park is also difficult. We ended up down a little lane but we just stopped and saw the outside as we now have to drive to another country – where are we heading to next?

Check out our next blog on our world travel adventures to find out. 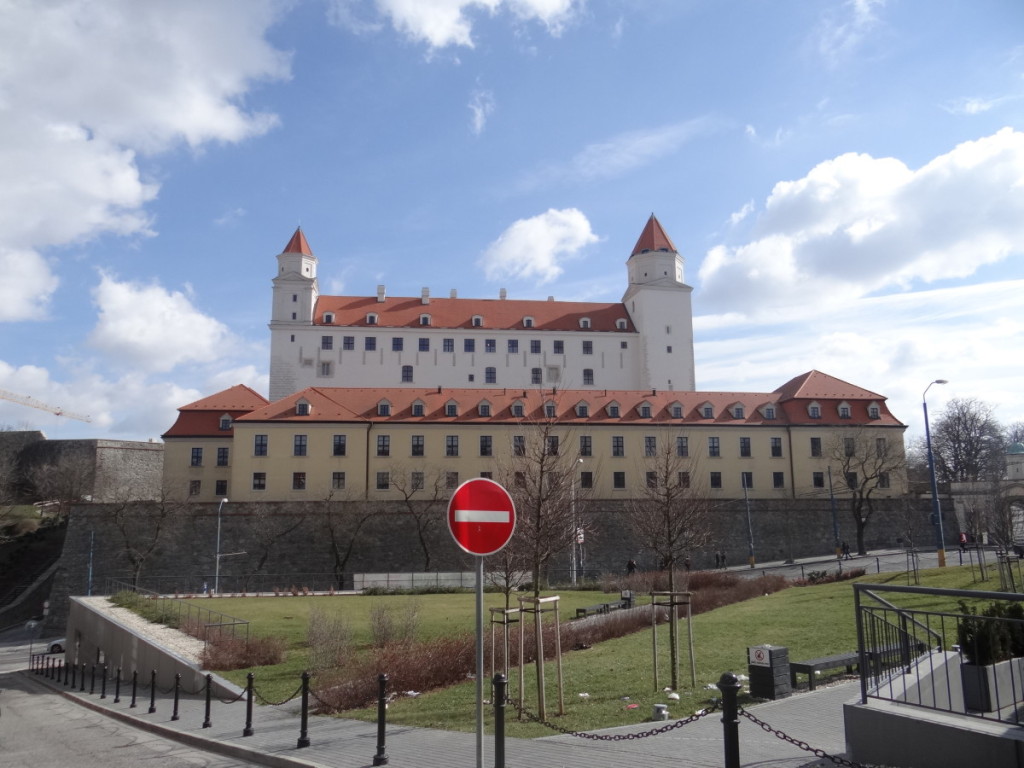 Breakfast: Yes a fabulous selection of hot and cold buffet is available

3 thoughts on “Beautiful Bratislava in Slovakia”