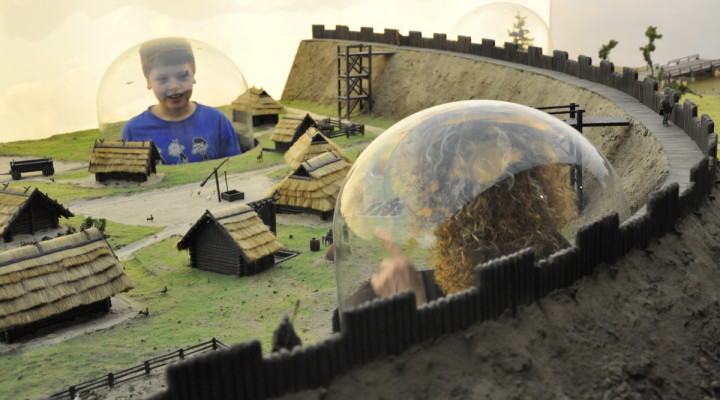 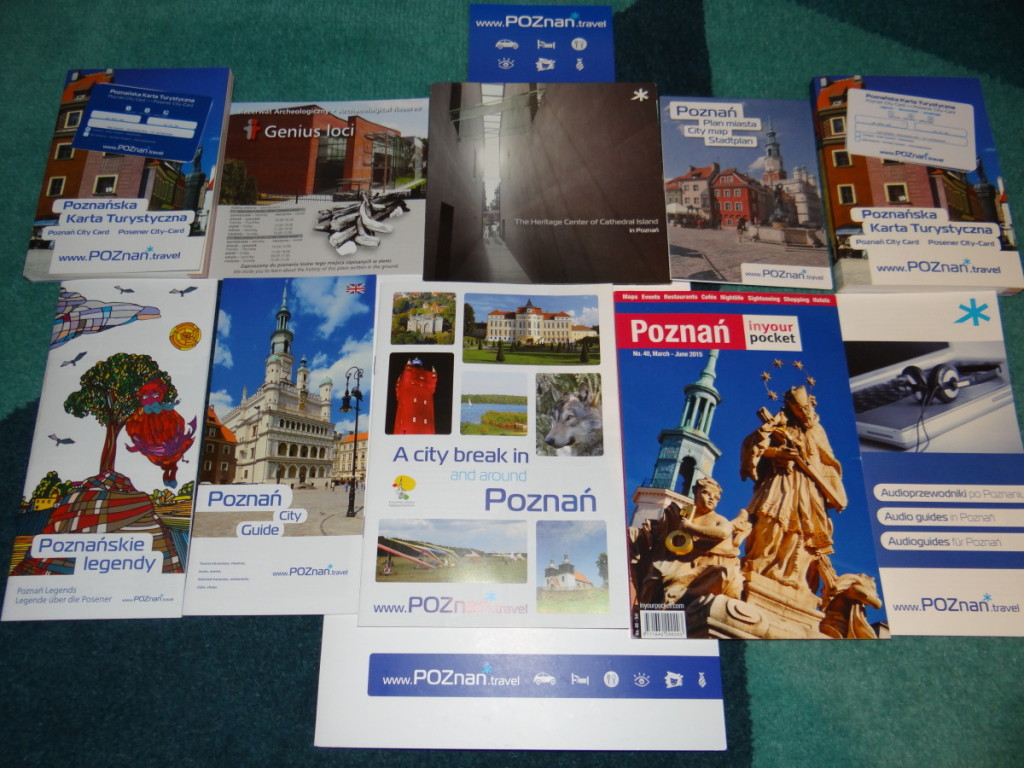 We are in Poznan, Poland.  I never in my wildest dreams even thought that when we started our world trip in 2012 we would still be traveling now – in our 3rd year. Neither did I think we would be in Poland.

We flew in last night to Warsaw, and then took a train to Poznan.  It was a pretty cool experience and found the whole train system very efficient.  They have an illuminated board at the central station.  You check your carriage number (it is a booked seat in an assigned location). The board will show you which section the train stops as.  It is a super long platform, so this means everyone is waiting at the right location and saves time.

We arrived about 11:00 p.m. to the Puro Hotel Poznan and instantly loved it.  Armed with a stack of brochures on Poznan, maps, and a Poznan City Card for each of us for their transportation, we were set to go.

We started the next morning by walking through the old town where Puro Hotel is located.  We found this pretty cool courtyard as we walked through too. The buildings are residential, but some hip shops are on the lower level, and I can imagine what it must be like in the summertime with music playing, and people milling about. 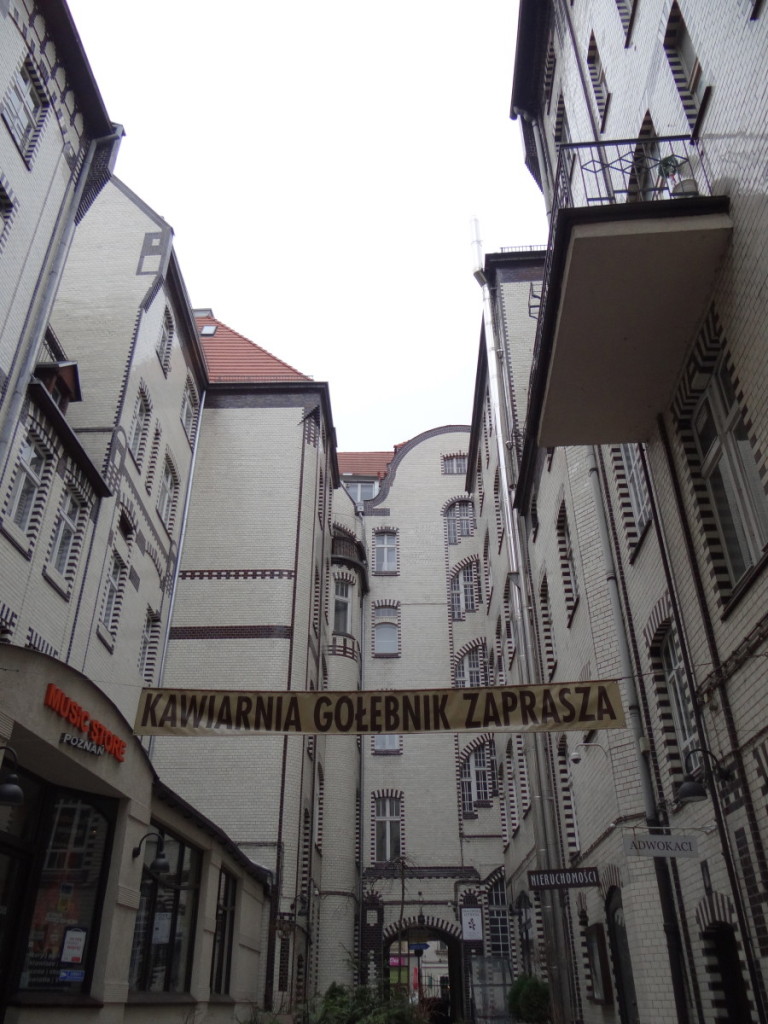 We walked across an old metal bridge (They moved this bridge piece by piece as it wasn’t strong enough for car traffic, but wanted to keep it for foot traffic).

Stretching across the waterway is a glass walkway that connects an old building to a modern one for a brand new interactive family activity center called Porta Posnania. 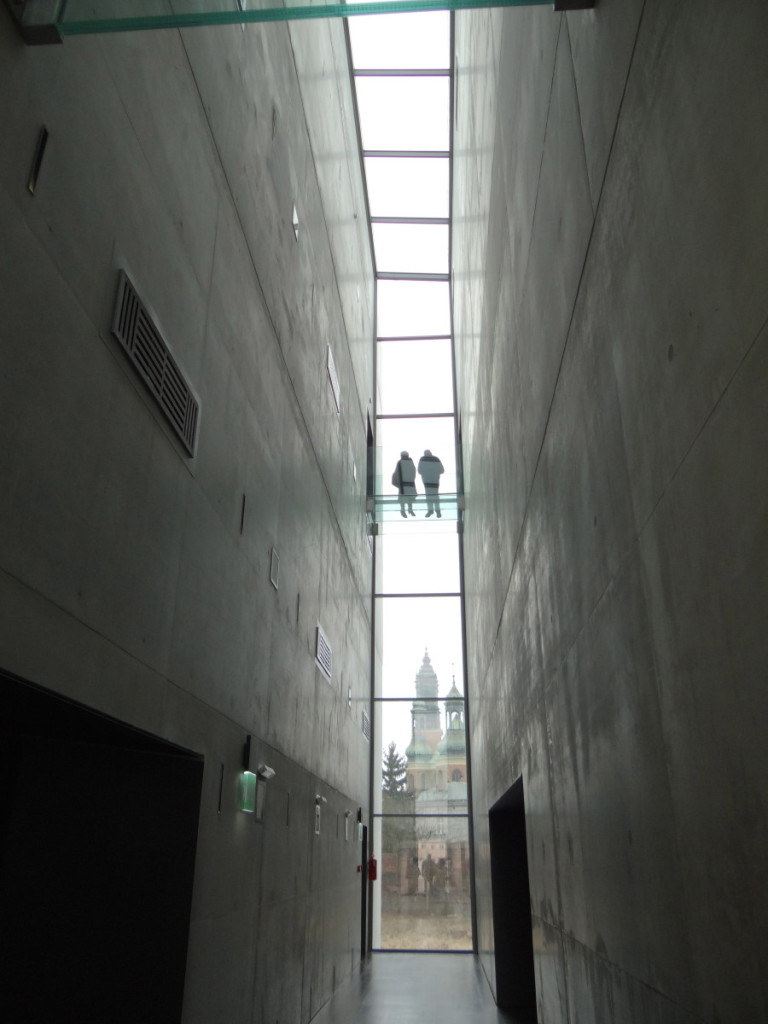 We decided to use a guide, where usually you are given headphones. There are two different sets. One for the children and the other for adults.  It has fun activities and a different style of learning about the origin of Poznan. 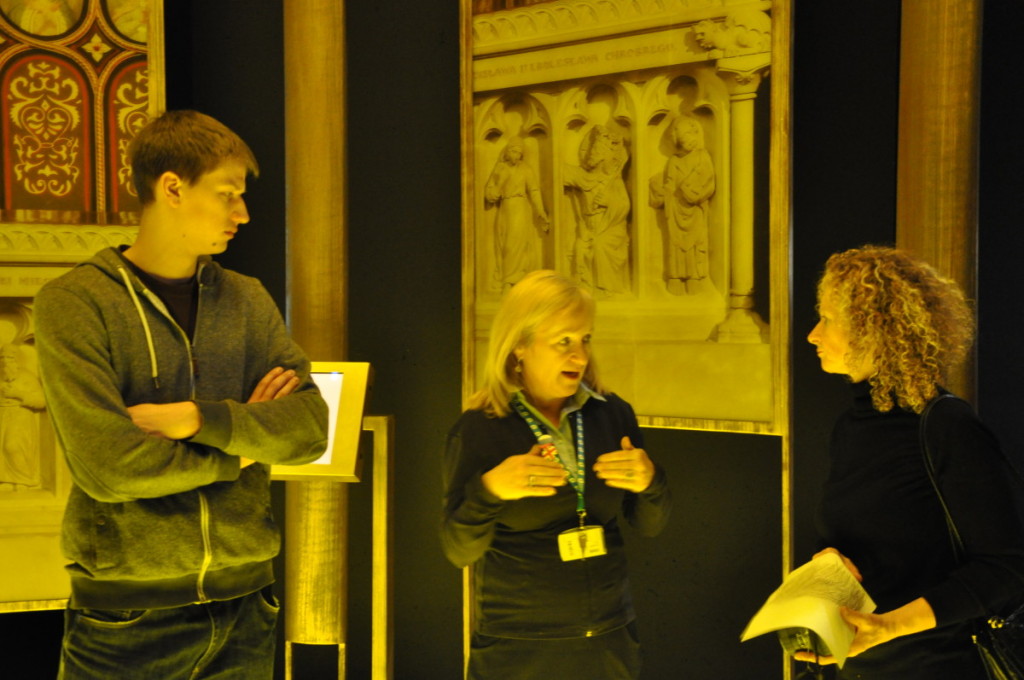 The great thing about Porta Posnania is that they have a selection of options for family tickets. You can purchase a family ticket and members can come at different times, or all together. And you can also choose to purchase tickets for each person. So this would work well for example for a large family.

The first area was an instant winner for Explorason.  He loved the pop-up bubbles where we saw ancient Poznan as a table model. 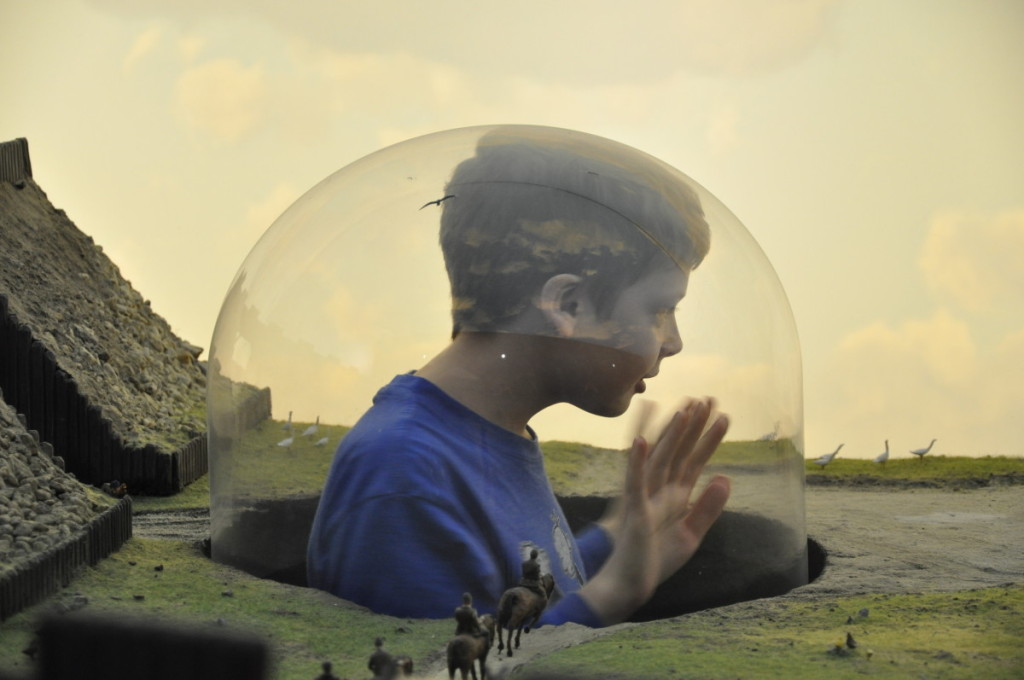 The next room in Porta Posnania had an interactive iFloor. As we walked on it, the city would change from new to old in mini screens to make up a whole picture. Things like the river would remain, but the buildings would change.  It was a great concept. 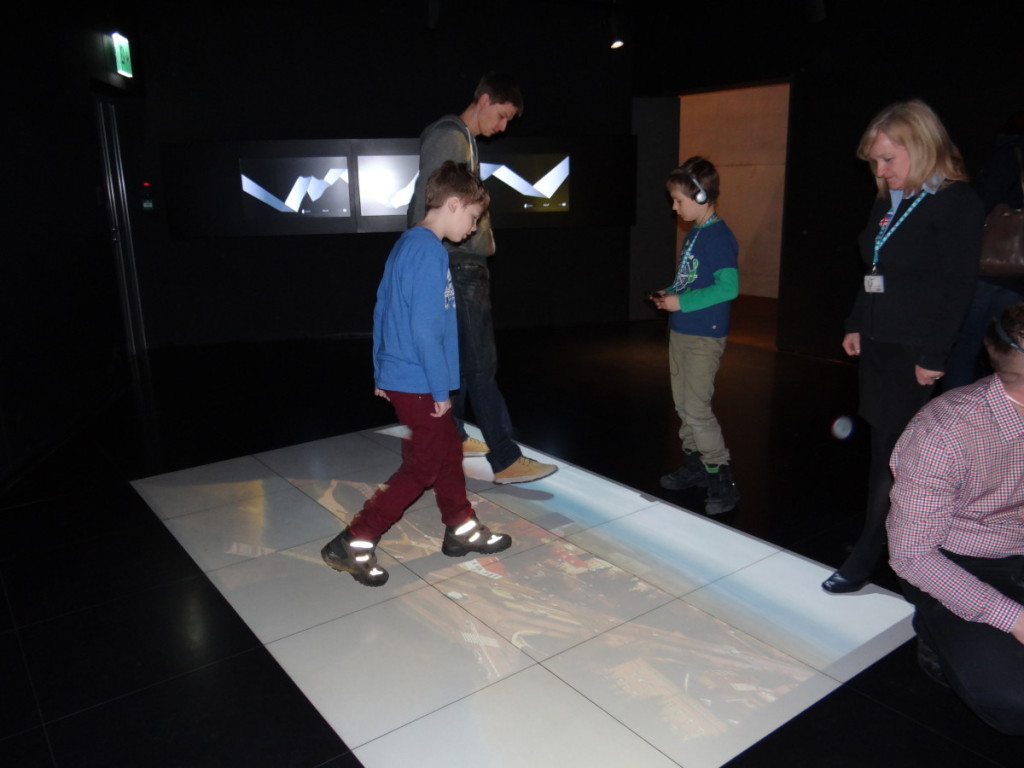 Then there was a room where children (and adults) could turn the handle and see how transportation used to be.  It would show things that affected them as they traveled. Groups of children race and scream and cheer each other on in this room. 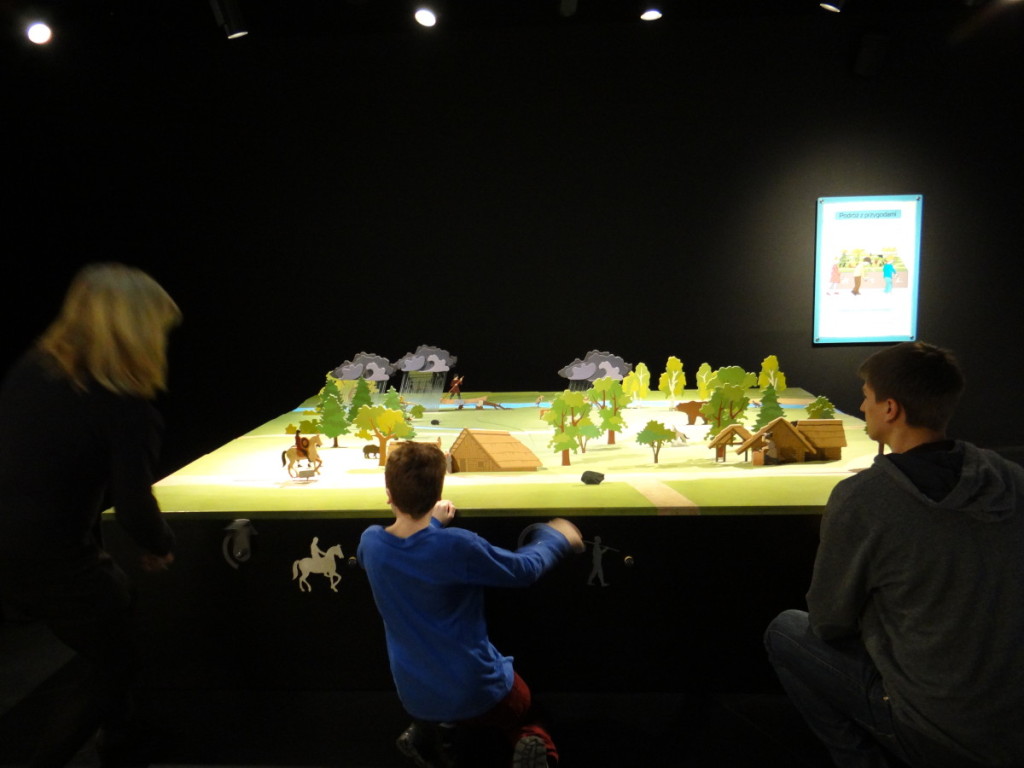 One of the favorites for Explorason was the ‘Dressing or Costume Room’.  The screen would measure you, and then you could select a costume. It would tell you if you picked the right hat for the outfit etc. Then it takes a photo and that can be emailed to you. 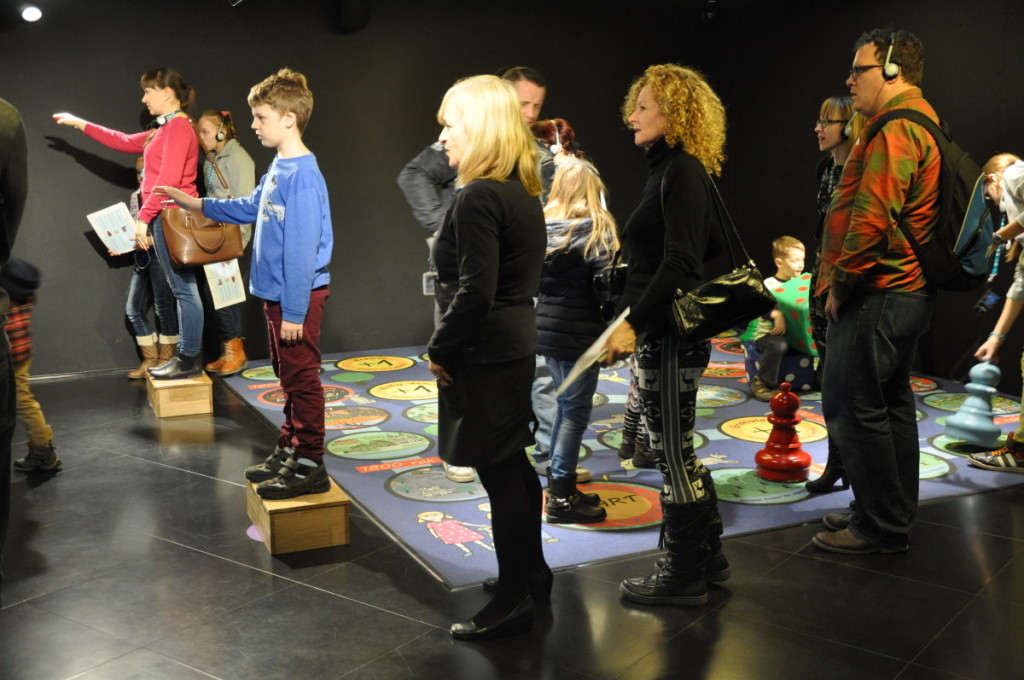 Of course, Explorason had the character dancing to “Gangnam Style”! 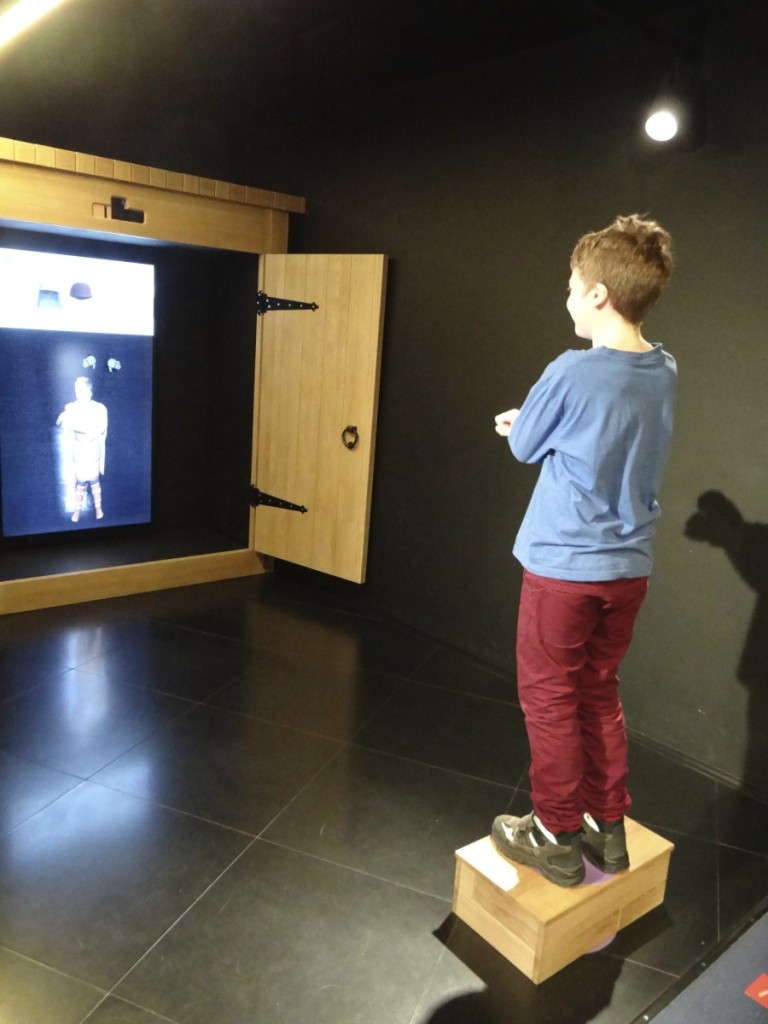 I personally was awestruck by the illuminated area that represented the inner sanctuary of the nearby Cathedral. There the dome ceiling portrays a painting of God the Father watching over you with his arms lifted to bless. I have seen paintings of Jesus many a time, but this is the first in our world travels we have seen God depicted. We know no-one knows what he looks like, so I guess that is why no-one paints him, but I definitely wanted to visit the cathedral after seeing this. 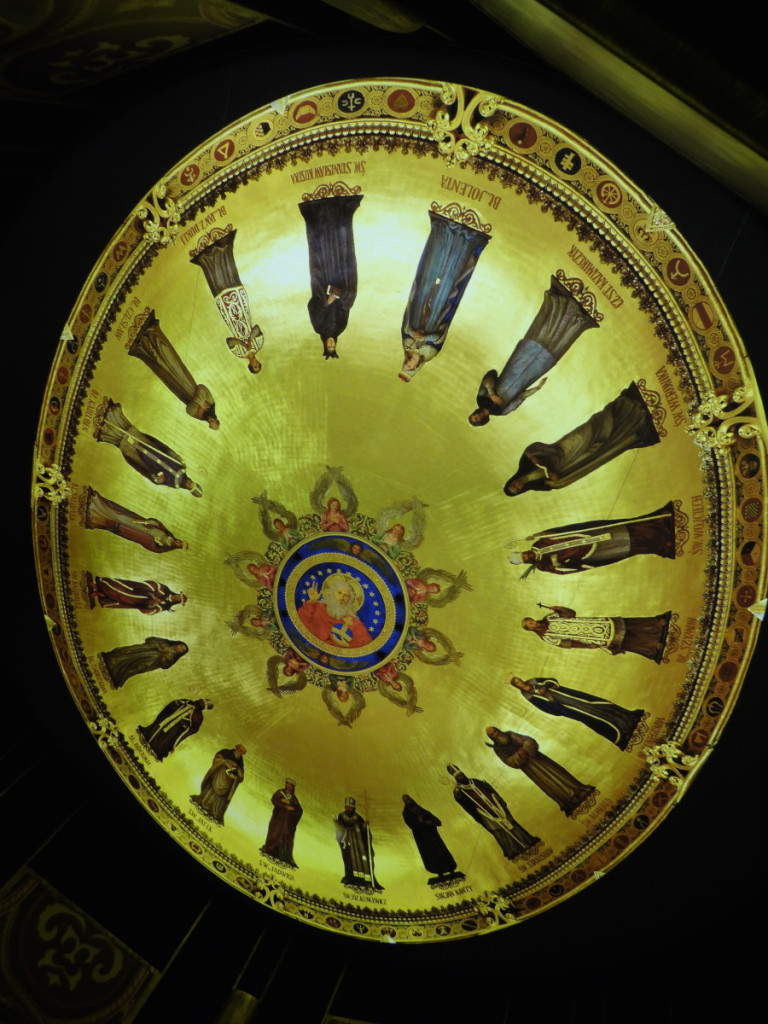 The next room had the Emperor and Empress clothing – but they were made of paper!  They have no faces. It’s because they actually don’t know what they looked like. So creators of this exhibition decided that the most honest solution is to leave it to our own imagination, and show in a form of the virtual book how artists imagined them through the ages. This virtual book is where the pages turned as you touch the corner. Another very cool idea for children. 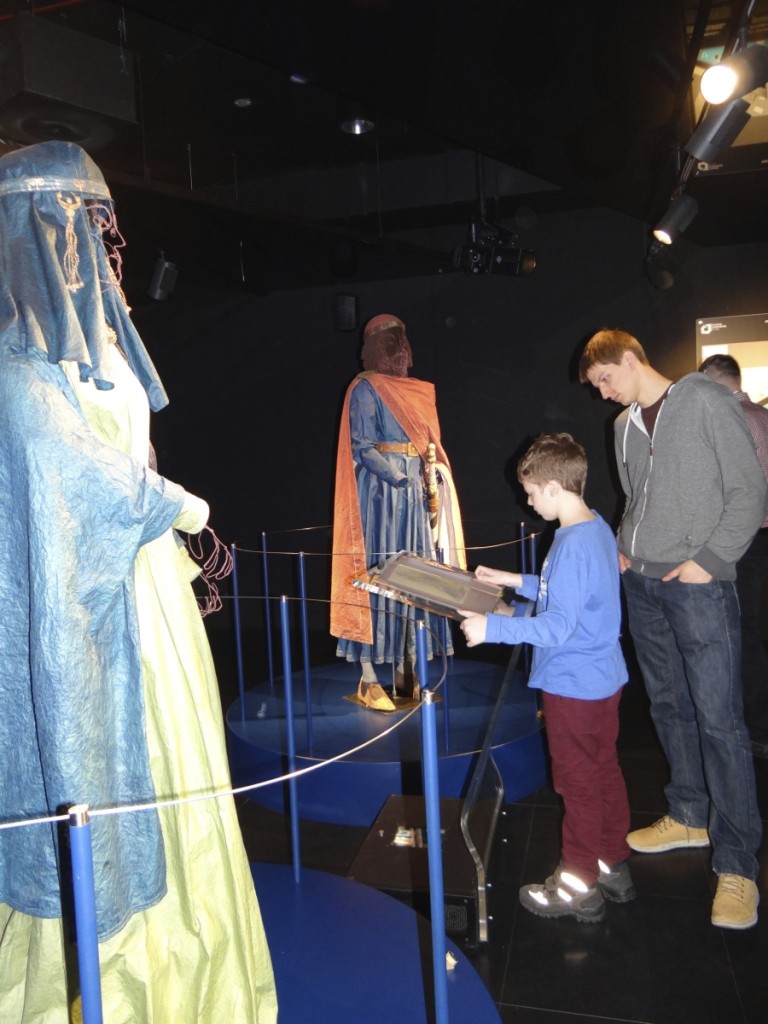 Next stop was learning about how the original area of Poznan was transformed from a swamp to a rampant (like the model in the photograph).   This Archaeological reserve on the Cathedral Island (where this cross-section of stronghold’s embankment is) is called Genius Loci (“spirit of place” in Latin).  We first head into a small cinema room here. 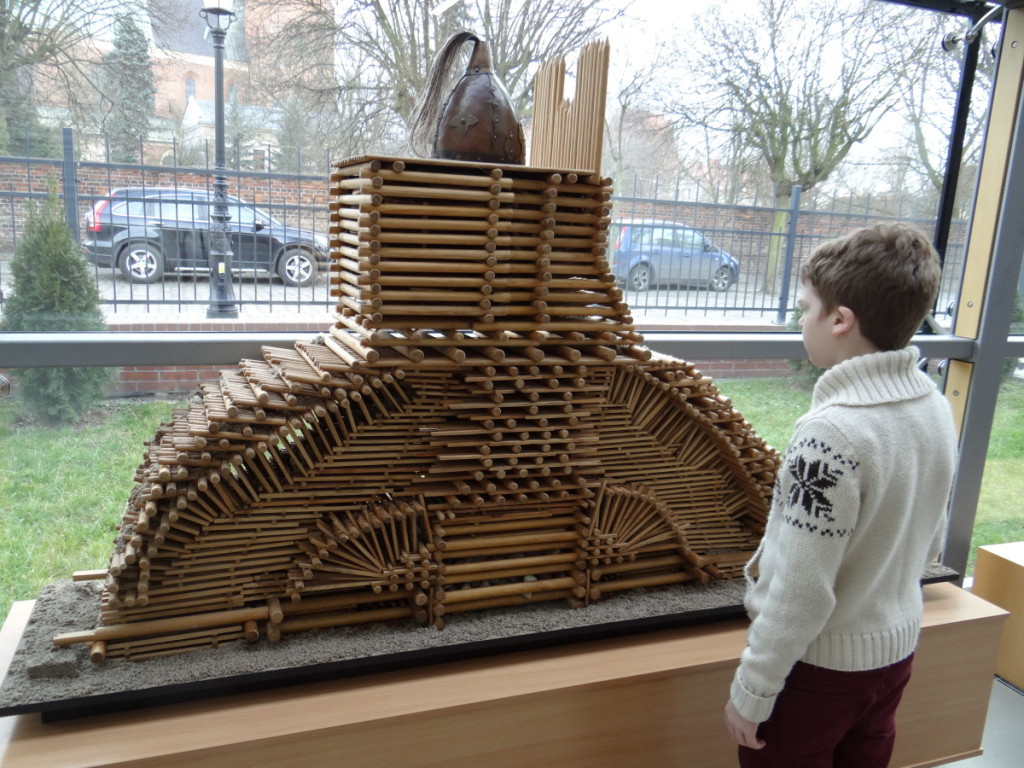 It was great as the three of us were alone in the film, so we were able to don our 3D glasses and lounge around on beanbags. 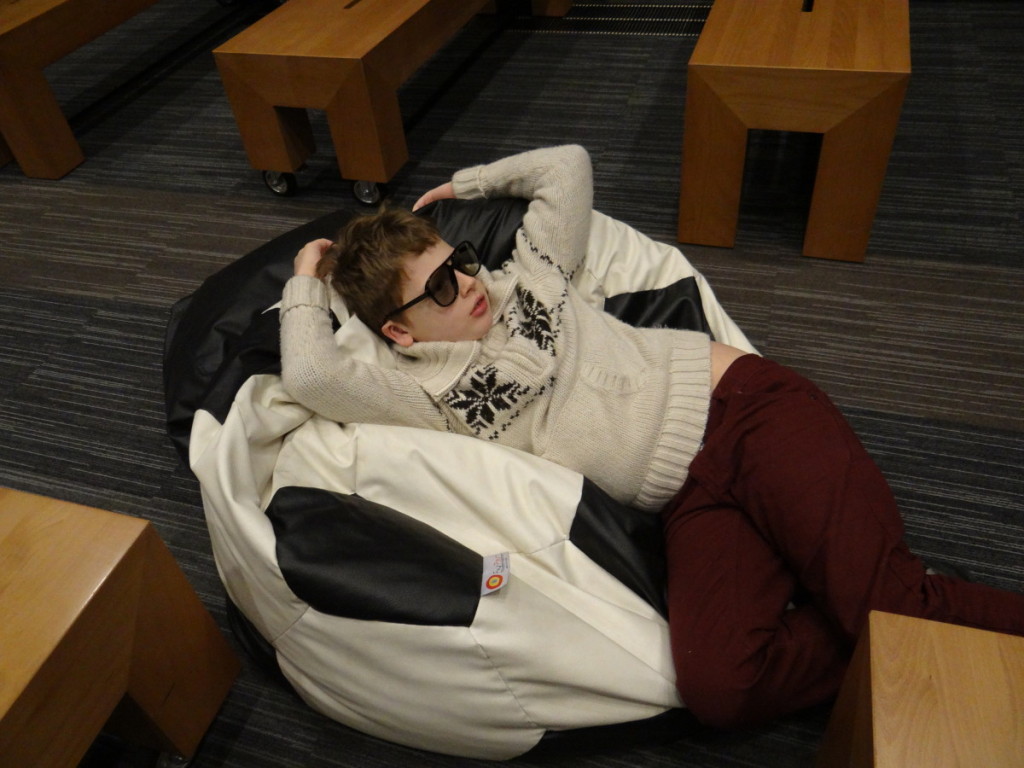 Then we wore headsets so we could listen to English (other languages available) for the tour as we walked over reinforced glass walkways that showed where they had discovered the original part of the walls below us. 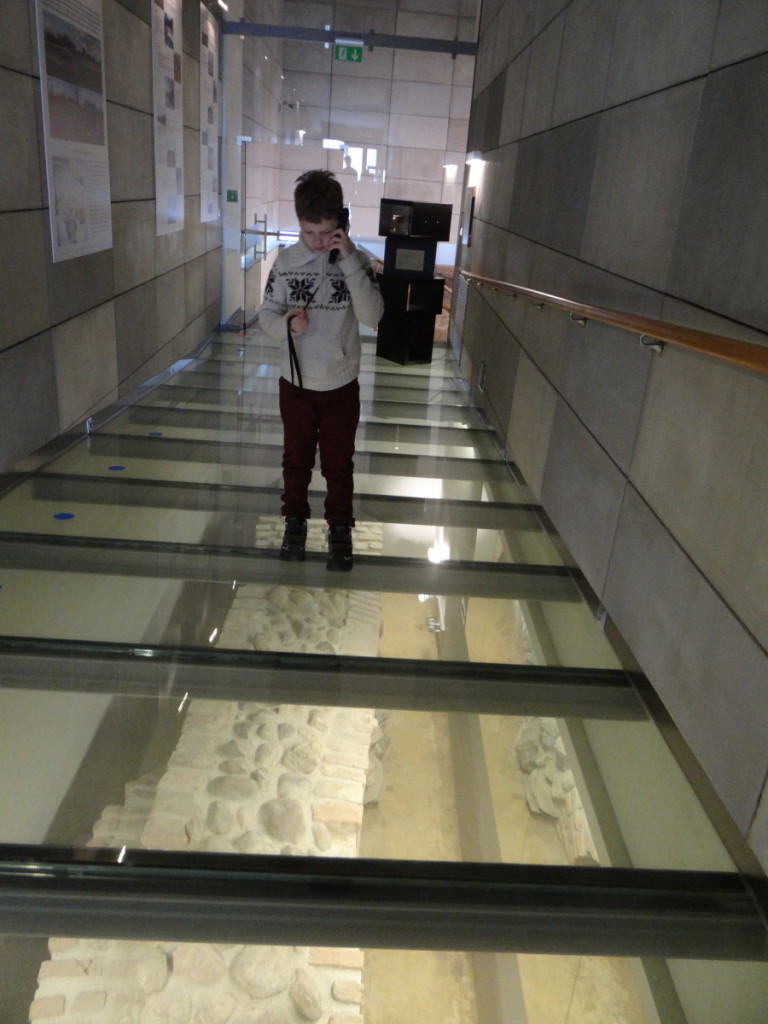 The next excavated room made me feel like we had walked into an archaeological site in Ancient Egypt, not Poland.

Layers are clearly visible of the weaving and work are done with wood from the trees that had formed the base of the structure. Then stones had been found from another layer.  It was just incredible. It has to be seen in person to fully comprehend, so I suggest a visit here – we have not seen anything like it on our world travels!

We left there, and as we walked back to the Cathedral we saw a cornerstone. Legend has it that as the soldiers went to battle they sharpened their swords right here.  This stone empowered them to be strong and win the battle.  Over the days here, we head many a Polish legend, and they were great! 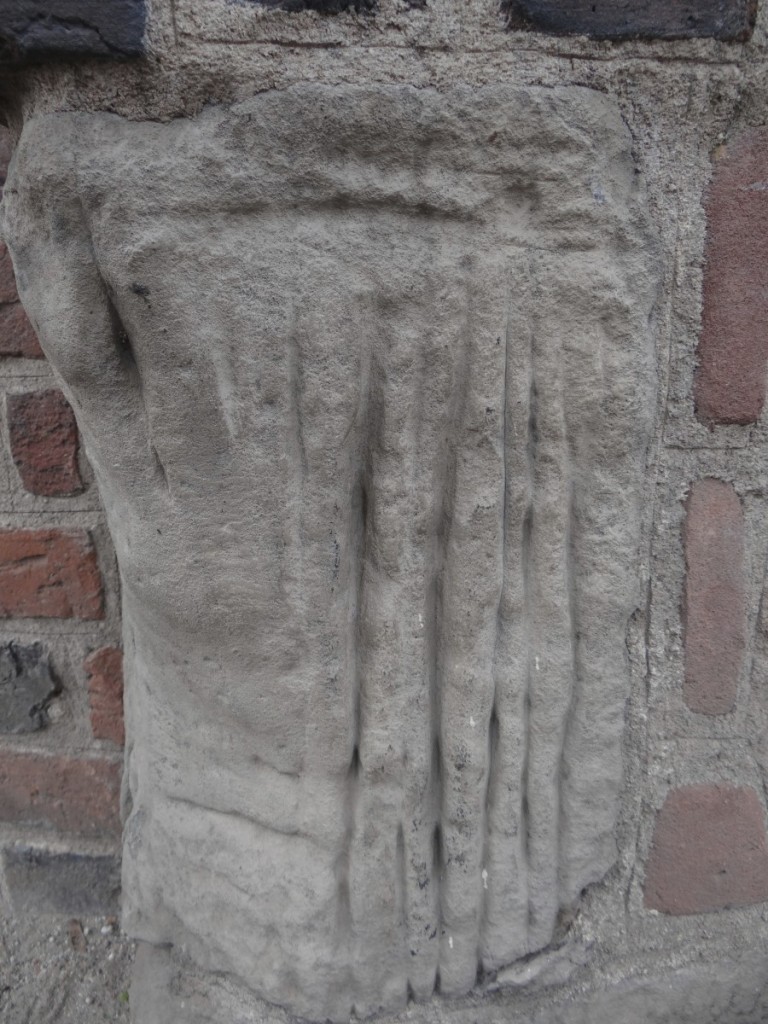 The Cathedral Island area is beautiful.  In fact, our friend Sylvia who lives here (we met her family in Guatemala in 2013) was married in this very church. We head into the Cathedral, and I get to see the gold ceiling with God painted. It is a locked up sanctuary, but you can see through the gates.  It had such a peace about it.  I loved the moment I had there, feeling that trust in God is more important to me than blessings, but that blessings come as a result of trust. 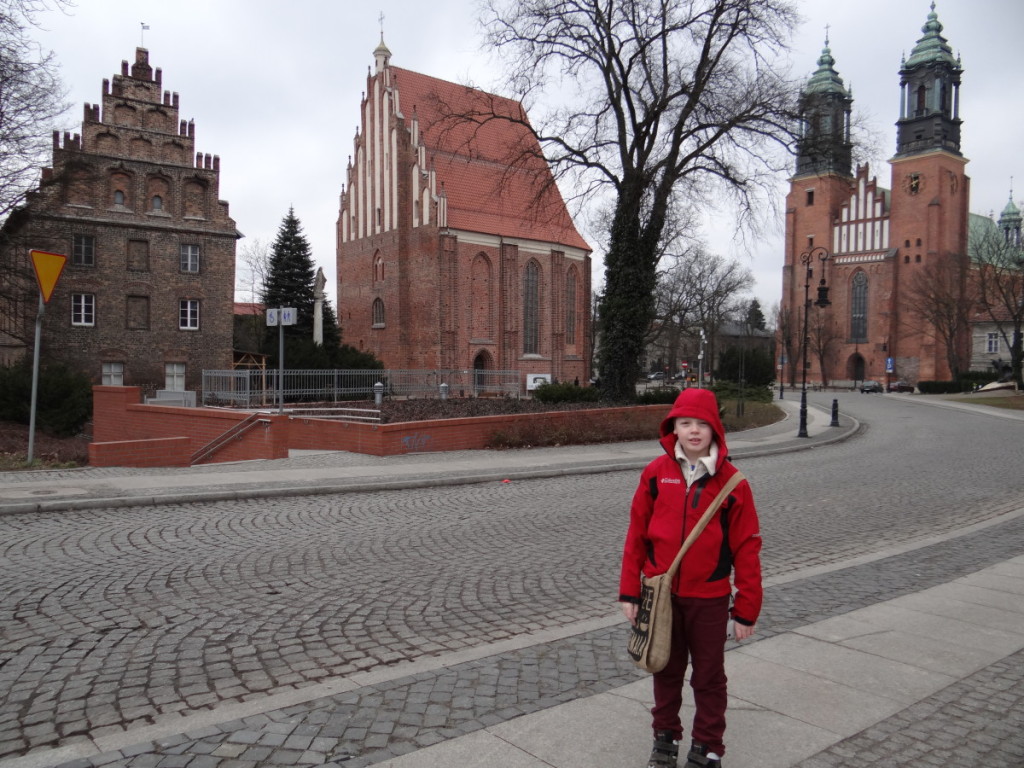 We finished off with a late lunch in town at a restaurant called Zielona Weranda Caffe & Ristorante (‘Zielona’ means simply green, and ‘weranda’ is a porch or verandah in English).  The ceiling and lights are covered with straws and they change the decorations each season. 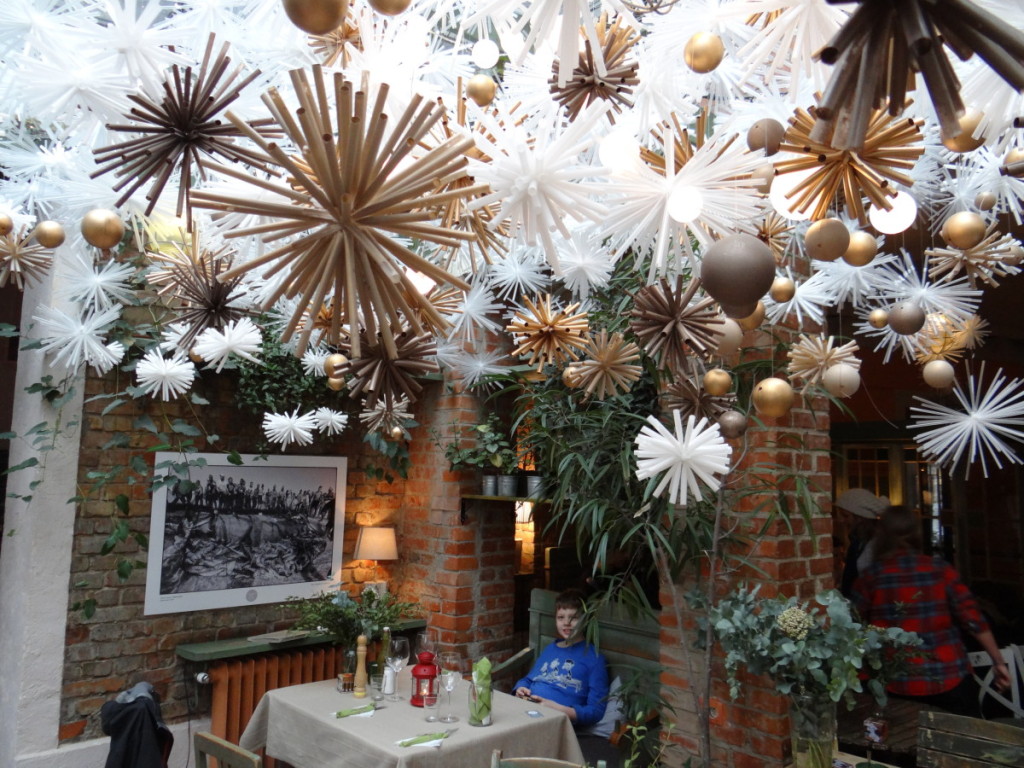 I guess all that walking made a certain young man hungry.  He finished the day off just as the sun was about to go down with a massive serve of ice-cream and chocolate. 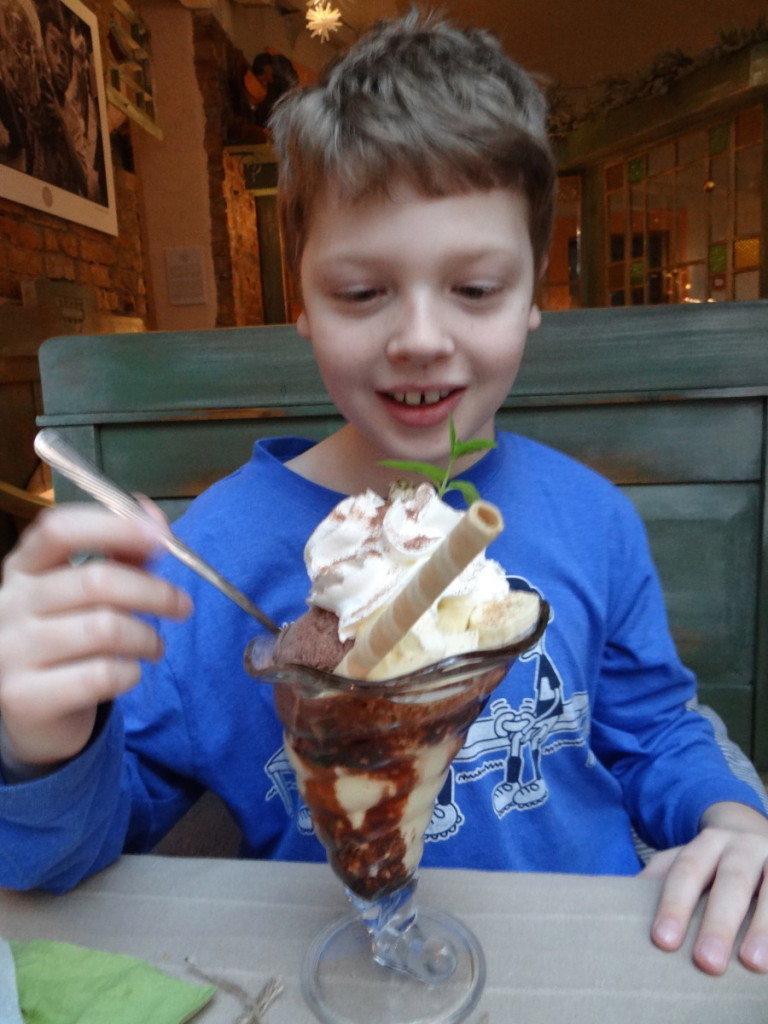 Exploramum and Explorason – Poland, Poznan – end of our first day in Poznan

My goodness.  This is just the end of Day 1 here in Poznan.
We can’t wait to see what the next few days hold for us.
We hope you can continue to follow our world journey but in particular our time here in Poznan.

For complete information about tourism in Poznan – Poznan Travel: http://www.poznan.travel