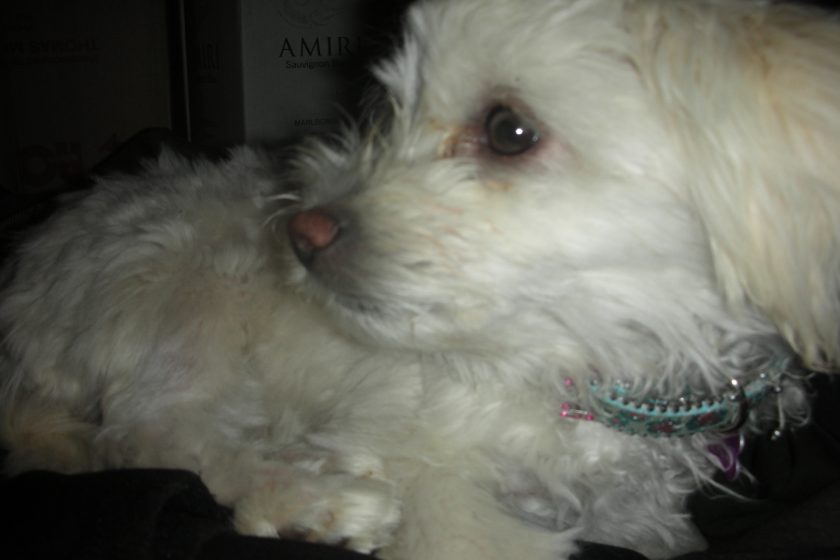 Family Pets – What to do with your loving canine

*Please make sure you read the UPDATE below*

This is a tricky one – we are talking about your precious family pets! You will need to use your judgment about what is right for you. Hopefully, I have – or will. (Later it proves I didn’t).

‘Santa’ had bought us a Maltese-X puppy last Christmas. She had arrived well before the plans for the trip.

I need to get away for a while after the messy breakdown of our family unit.

We also had a talking budgie, which had flown onto my finger on Valentine’s Day, so he was called ‘Valentino’.

He used to imitate in budgie screeching exactly how I would call my son’s name. Scared the living daylights out of me the first time! I couldn’t believe I sounded like that.

So we decided that the first would be the blue budgie bird. We ended up selling him with an exotic cage at the Garage Sale. Sad for us – we could have sold him ten times over on the day. In the end, he went to a guy born on Valentine’s Day, so seemed to be the right thing.

Much harder is the dog. We love her, she is not de-sexed and we always wanted a litter of pups. So the new carer is welcome to have a litter, as long as it is to a smallish dog, please.

So we decided we will try to find someone who will take care of her for the duration of our travel. Where she is theirs to keep until we come back to Australia.

But at the end of the day, she is a part of our family. She belongs to my son and is not mine to give away. So we agreed we need to find someone who will love her, and care for her, and treat her like their own – well at least while we are gone.

She would be a great companion to an older person. She has accompanied us on visits to a nursing home of an old lady we know, and she is blind. The dog was a hit! So many oldies wanted a cuddle and a pat!

What Coco Comes With …

Coco doesn’t bark a lot, she is toilet trained, microchipped, and registered for the next 12 months. I think that means all the hard work is done.

She also loves to dance!  Any time the music comes on at the end of a movie, she is up on her back legs dancing with us.  She gets quite upset if you leave her out.  So cute.

Gone are the playful puppy disasters you come home to – where she has eaten your back wire screen door, pulled out all your plants, dug holes in your garden, destroy your brush fence, eat your washing and chew your shoes – and I am sure the list goes on.
She is a great guard dog and will let you know if there is anyone lurking around or at your door.  She actually once woke us up when there was a fire in front of our house.

We will keep you posted about her – please contact us if you know of anyone who would like to care for her for a little while.

She will only be available when we are ready to go, but we do need to plan. We just want her loved, and she will be a really loyal friend.

Sadly, we have news about Coco.
We delivered Coco for a trial sleepover to the petsitter, she was wearing our rego tag, and we supplied the microchip emergency updated details to the petsitter, so it was clear she was not gifted.
Then, we discovered the petsitter we had chosen in July 2012, has refused to give our dog Coco back to us since May 2013, intimating she had ignored all this and it was a gifted dog.
Yet she had made no attempts to ask for any legal paperwork from me, nor stated she ever believed it was a gift, which is really odd!  Plus, if we gave really had given her the dog, why did we organize a trial sleepover; free deliver the dog (when if you gift something they’d be picking it up); offer money for care; keep up written communication; not sell the dog; give a valuable dog to a stranger when a friend wanted to have her; register her for the next 12 months; and change the emergency microchip details???????
And where is the ‘thank you’ to a young boy who was supposed to give away his precious pooch?
I even offered to desex the dog if the petsitter didn’t want to have a litter of puppies as part of the exchange for care of the dog (though we really didn’t want to do that unless it was the last resort) as we wanted a litter of pups ourselves when we got back.
Who offers to pay $200 to desex a dog they are giving a stranger when we have a record of friends wanting to care for Coco too?
No, I’d say Blind Freddy would question a few of these truths.

In May 2013, when we discovered the pet sitter had bred our Coco 2X with back-to-back litters of puppies (we have photo evidence of both litters from her social media). But, we only found out about the second litter AFTER the puppies were born when the petsitter said “I hope this doesn’t upset you” – well YES, it did!
Why did she keep that from us and endanger our dog’s life as we then found out (only by reading her Facebook page) that our dear Coco had become very ill with having the second litter of puppies, and immediately, we asked this pet sitter to stop breeding with our Coco!
This woman (twice in writing) offered us a puppy from the litters, telling us they’d offer to keep the puppy until our return to Australia, with the first offer, only three months after we had left. Clearly, this shows she doesn’t think we are gone indefinitely.
Again, in May 2013, when I found out Coco was sick after the second litter of puppies, I offered (in writing) to address finances and have the dog flown to us; arrange a friend to go and get her and care for Coco, or, we would even return to Australia from Brazil. This was 9 months after we had left Australia, and she had already bred our poor Coco twice!
We have searched endlessly for her since 2013, but this woman cut communication after telling me “If you want to fight me – feel free“.
She then moved residences without advising us or updating any emergency details for Coco, and we lost all hope – until we recently discovered the pet sitters whereabouts!
Right until August 2018 (near the time we finally located this woman) she had never bothered to register our Coco, as far as we can find.  So, as far as we know, there were no council registrations for Coco after mine expired in July 2013; there were no attempts to claim ownership of Coco by this woman, and she’s never even asked for any paperwork of ownership to be transferred.
We also have printed evidence that our Coco has escaped on more than one occasion, but the pet sitter hasn’t since then (until her ‘registration’), taken any legal safety measures with Coco’s safety records, even after these escapes happened.
But what is weird, is Coco was already registered to me this year,  plus, she is listed as MISSING with so many relevant organizations.
I’m told that legally if the online application is entered correctly for a dog registration, the same dog cannot be legally registered two times. So how did that second registration legally happen by this woman if all the details were entered like Coco’s microchip number, and transfer from last owner documents etc?

We are still trying for the return of our dog Coco, and there are some vicious and untrue stories, defamatory and slanderous remarks going around about us, especially started by the media and fed by this woman and her ‘Christian’ mother.
I’ve received hate emails and messages; disgusting slanderous and defamatory comments by the thousands; accused of ‘stalking’; online and printed newspaper articles; TV shows; negative reviews on my website and social media posts; and media hounding us; and even a post on Instagram by the person who has Coco now, saying she is not stabbing someone when she really wants to, referring to ‘doggothieves’, and on it goes.
And like sheep, the masses follow the story which inaccurately states we only returned to Australia in March this year and have been traveling for six and a half years.
Considering we didn’t even leave to even start our travels six and a half years ago, this is particularly interesting as that means at that time I’d never even communicated with this woman, Coco was still at our home, not with this woman at all.
But also, just because a post is published on a date, that does not mean we are at that location on that date.  Publication dates are not indicative of our travels or travel at that time. And we did NOT come back to Australia in March.  We were in Australia already in March 2018 so that is yet again another lie about us!
Also, considering my son went to school in Australia for some (or all of the year) of 2015, 2016, 2017 and 2018, this obviously means he must have teleporting skills? I think since we arrived back in 2015 we have had all of about nine months out of Australia and here it is near the end of 2018.
Had this journalist even bothered to look at my Instagram account there is a photo of Explorason graduating primary school – right here in Adelaide 2017, but this journo stated we returned here in 2018 – but he didn’t just fly in and graduate!
Clearly, no one bothered to check the facts!

No, I will not talk to the media!

No sooner had I been admitted to hospital last Friday and as I lay attached to an IV drip, a new nightmare began.  A journalist emailed me that she was going to print a story about me (plus Exploramum website, so it turns out) and as the weekend unfolded, this twisted story and exploded all over the world and a nightmare began, causing my health added and incredible stress, as nurses comforted me in the night as I lay crying.
Besides being too ill in hospital for several days this past weekend, I’ve had a past terrible experience where fifty copyrighted photos were stolen from my website by a journalist’s agency I’d never even heard of. Plus, information about my son and I twisted and printed in two online media stories, which was picked up by other online publications and spread like a virus.
So I have learned my lesson not to trust media ever again.

We are still trying to get our Coco back.

Coco is registered and microchipped to me, and my son longs to have his Coco back as they were inseparable.
Coco came into his life at a very difficult time in our family life. Yes, they were bonded too, and their bond should have been reunited years ago.
This matter has now thankfully been successfully resolved in court.  We move on and leave the legal system to sort out the rest.

Planning On a Trip?

There's always a story. It's all stories, really.

“Whenever the rainbow 🌈 appears in the clouds

"Nothing in the world is friendlier and more affec

“What’s behind you doesn’t matter”. ~ Enzo

“I will prepare and some day my chance will come

“Being on a boat that's moving through the water

My favourite reflection quote... “Life can only

“You know, a dog can snap you out of any kind of